Earlier this month, when the coronavirus pandemic and the safety measures designed to slow its spread started threatening not just pro wrestling, but the live event business in general, WWE’s public stance was curious. The situation did escalate quickly, but WWE’s initial defiance in the face of the novel coronavirus pandemic, even as the NBA cancelled its season and the NCAA did the same with the Final Four, was troublesome. WWE would eventually succumb to the reality of empty arena shows for the time being, but then, on Thursday, we got a reminder of how Vince McMahon’s company really works. That’s when news broke that Roman Reigns had pulled out of the WrestleMania taping earlier in the week.

“Pulled out” is the operative term there. Pro Wrestling Sheet reported that “Reigns expressed to WWE that he didn’t feel comfortable doing anymore of the Performance Center shows during the coronavirus pandemic because he’s immunocompromised from his battle with leukemia and didn’t want to risk his health.” That’s great, but shouldn’t WWE’s medical team have made the decision preemptively to shelve him until the pandemic was over? 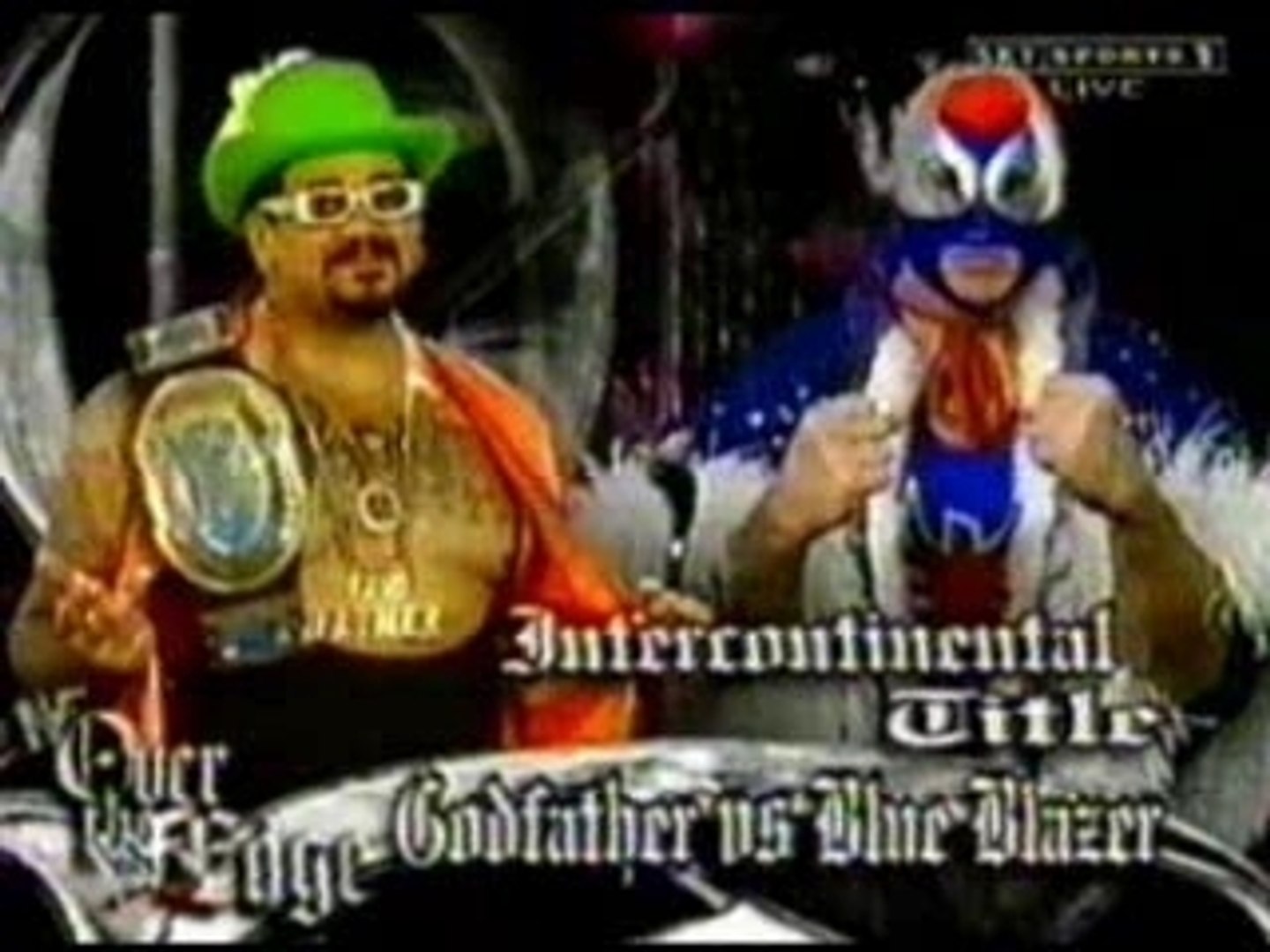 Coincidentally, a few weeks ago, just before the pandemic became a more immediate concern for Americans, I was checking up on pending document requests I had put in with various government agencies for different projects. Then, I realized that a request to the Kansas City Police Department last year, where I sought the file on Owen Hart’s death to help with an article for Deadspin, had fallen into a black hole. I called, they apologized, and, because the producers of VICE TV’s Dark Side of the Ring had recently put in their own request, the KCPD had a ready-made PDF file to send me.

(In the unlikely event that you’re reading this and don’t at least know the broad strokes: Hart fell to his death during the Over The Edge pay-per-view event on May 23, 1999 at Kemper Arena when the rappelling gear for his ring entrance failed. Hart had, on a few previous occasions in the Blue Blazer gimmick, rappelled from the ceiling in a parody of Sting, one of the top stars in rival WCW.)

When I got it and started reading through the police file, only limited portions of which have been reported on before, I was reminded just how much the true story of Owen’s death is a template for how WWE (then Titan Sports d/b/a the WWF) does business. One that feels instructive in light of current events. (We’ll rely on the police file as much as possible to emphasize how freely available the key information has been since the criminal investigation was closed on July 30, 1999, but there are gaps that need to be filled in from other sources to tell the story properly.)

The 73 page file, released, is not in any particular order, so it can be a bit daunting to read at first. The early pages include some grim details, like wrestling fans Eric Araujo (page 6) and Sharon Kennedy (page 10) fearing that someone had murdered Hart, or how one of the local union riggers, Jim Vinzant (page 1) initially thought Hart landed on someone when he fell. (Hart brushed past referee Jimmy Korderas, but thankfully with only enough force to leave a bump on the official’s head.) It’s on page 17 that you start to get a better picture of what was really going on, as it’s revealed that WWE Vice President of Event Operations Steve Taylor, who booked stunt riggers, had slow footed speaking to detectives. Then, on the next page, we start to get an idea as to why.

Page 18’s report was taken on July 12, 1999, the same day that page 17 was generated by Detective William Martin III to memorialize his efforts to reach Taylor. It recounts a conversation that Martin had with Donna Maryanski, an attorney representing AMSPEC, the company that head rigger Bobby Talbert had purchased his stunt equipment from; they also aided in designing the stunt. After noting that AMSPEC had retained Joe Branam, a rigger who had previously worked extensively with WWE, as an expert witness, Maryanski shared some details that cast what happened in a new light.

“She stated that she believes that Branam was originally contacted by the WWF to rig the stunt in Kansas City, but that the WWF had turned him down due to him apparently wanting too much money to complete the job,” wrote Martin in the report. “She believes that is when the WWF contacted and hired Bobby Talbert for the job. She stated that after Branam thought about it, he told his wife, who works for his company to re-contact the WWF and tell them he would do the job and for whatever they wanted to pay him. Maryanski stated that Branam reported that he was not re-contacted by the WWF and later found out the WWF had hired another person for the job.” She also “stated that Branam has told the WWF in the past that he was not going to be part of a particular stunt, due to the safety concerns he had on how the WWF wanted it to occur and the rigging and stunt were not done.” (She appears to be saying that the stunt was not done that way while Branam was coordinating it, though, which would be obvious on its face.)

The fail point of the rigging system that Hart was attached to was a single “quick release snap shackle” manufactured by Lewmar, a company that made marine equipment. It was designed for quickly dropping sails and the like, not stunt work, but that, as noted repeatedly in the file, is not an issue in and of itself, as repurposing items “off-label” is common in the stunt industry. The problem was that a single snap shackle with no redundancy was unsafe for reasons that should be self-evident. (To make matters worse: According to the lawyers representing Owen’s wife and parents when they filed a wrongful death lawsuit against WWE, Lewmar, AMSPEC, and others a month earlier, the shackle could open with just six pounds of pressure, 25% less than the 8 required to fire a KCPD officer’s gun.)

A few pages later, the file loses any sense of even loose chronological order, but more hints of the larger story pop up. Page 29 summarizes Det. Martin’s interviews with a trio of stuntmen, with notes about them saying that “most times there are some type of fail safe or secondary line” and how they “have seen the pull release be as low a one pound” on the quick release used at Over The Edge. Pages 41-50 document Det. Martin’s meetings with Tom Dewier of the International Stunt Association to get his input and test the equipment. Dewier cited numerous issues, from the vest being inappropriately restrictive of breathing, to the quick release pull cord having minimal slack, to giving Owen control over the stunt, to not using one of at least three safer options of rigging up the vest.

That’s bad enough, especially what was relayed from Branam, but pages 33-34, summarizing an interview with Bobby Talbert, the rigger in charge of the fatal stunt, confirms the worst.

According to Talbert, he was referred to WWE by Barry Brazell, the main rigger on Sting’s stunts in WCW, who Steve Taylor had called first. “[Talbert] stated when he met with Taylor [in Orlando a few weeks before Over The Edge] they discussed the type of stunts that the WWF was interested in having performed, which were ‘drop-ins’ from the ceilings and ‘pull-outs’ where a person is raised from the floor area to the ceiling,” wrote Det. Martin.

“Taylor had told him their company had other stunt people that performed these stunts in the past, but they were not good enough for the camera shots because they performed the stunts too slow.” When Taylor explained that they needed someone to help Owen Hart rappel from the ceiling, “Talbert told him that he had performed the same stunts with the wrestler, STING from the WCW. That wasn’t exactly true: It would come out in discovery for civil lawsuit, mainly from the deposition testimony of WCW stunt coordinator Ellis Edwards, that Talbert just assisted Brazell three times on the Sting stunts; he was not “Sting’s rigger” or “WCW’s rigger” at all. Regardless, Taylor contacted him the week of Over The Edge about working that particular show. “Talbert stated originally the stunt was to be that a midget MAX-MINI would be attached to the victim, however, they later decided against performing that stunt and were only going to lower the victim into the ring.”

There it is, in black and white: WWE was looking for a new rigger because past riggers, according to Talbert as paraphrased by Martin, “were not good enough for the camera shots because they performed the stunts too slow.” WWE rigger turned AMSPEC expert Joe Branam would, according to the 2004 book, Broken Harts, by Owen’s widow, Martha, add details during the civil case that confirmed the obvious conclusions to be drawn from the statements that he (indirectly) and Talbert gave police. Apparently, Steve Taylor had told Branam at least three times that Vince McMahon wanted a quick release on rappelling stunts for aesthetic reasons, which the rigger always refused, citing extensive safety concerns.

The night of Hart’s death, the same Vince McMahon who asked for a quick release held an impromptu press conference. There, he snapped at a reporter who asked why there was no redundancy in place protecting Owen, sarcastically declaring her “an expert in rigging” and accusing her of trying to “put yourself in the spotlight.” As long as that man is in charge of WWE, this way of doing business isn’t going away. Saving a few seconds on each occasional rappelling stunt was so important to Vince that he repeatedly tasked staff with finding someone who would do what an expert told them was far too dangerous to even try.

Of course that guy didn’t proactively cancel WrestleMania. Or sideline Roman Reigns. Why would you think otherwise?