The Oogie Boogie Bash at Disney's California Adventure hints at some appearances by franchise characters.

If you feel like Disney’s love for Kingdom Hearts has been slacking at the Disney Parks, it’s gonna be a great Halloween season. Several theme park outlets, plus one pamphlet shared by a Disney fan, have confirmed Disney’s plans to have some Kingdom Hearts characters appear at Disney California Adventure’s “Oogie Boogie Bash,” starting tonight.

The exact phrasing of the appearance is left vague, so we don’t know exactly which characters will appear. Disney states that “friends from Kingdom Hearts” will be making the appearance, specifically near Grizzly Falls.

We know a few costumes exist, specifically for Donald, Goofy and Mickey. There are some old photos from 2004 showing an old Sora costume, which… we’ll get to in a bit. But the Disney characters have been seen on-and-off for promotional purposes. According to one YouTube video, a couple even got Sora’s party members at a wedding. But again, because the phrasing is so vague, we might be finally seeing some characters in a different form. The Kingdom Hearts characters have grown up, too, so it might be easier to pull off different meet-and-greet styles.

How would those characters look nowadays? We’re not exactly sure. Disney’s been really mixing up how they portray their different characters at all levels. For instance, obviously, there are the big-headed characters, which are used if it’s harder to achieve “a look.” Lilo from Lilo and Stitch is usually a big-headed character, likely because it’s hard and probably problematic to hire child actors to have full-contact interactions with.

There are plenty of characters who are always reliably “face characters,” such as princesses and princes, plus Peter Pan and a few others. Disney is also indecisive at points. If you see Jafar on a stage show, it’s not just a giant caricature of the cartoon version’s head. His face is actually, like, a whole human face, but there appear to be some prosthetics. But if you meet him on the ground, you still get the cartoony head.

Whichever way they opt to go, hopefully their choice of a meet-and-greet getup a whole lot better than the Sora costume they used back in 2004 to promote the orignal Kingdom Hearts game. 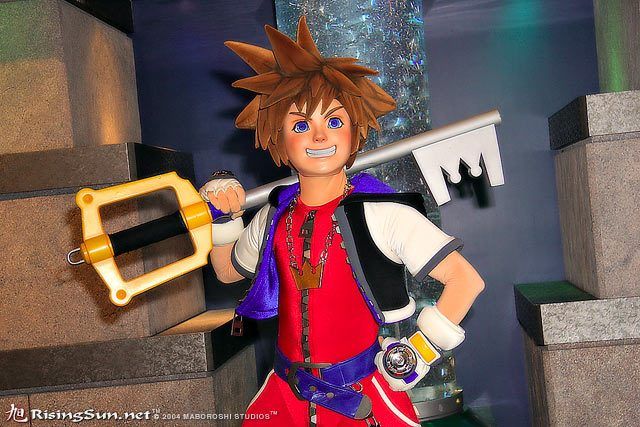 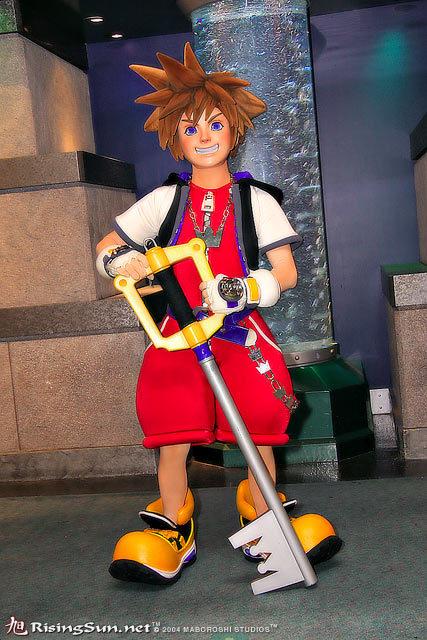 Hopefully this is a good omen for KH fans who attend the parks every once in a while. For Kingdom Hearts 2, the extent of their merch appears to be a Kingdom Hearts 2 official trading pin, showing Mickey slouched over in his Organization XIII jacket. It was a big deal at the time of release, given any series’s appearance in the Disney Parks trading pin program was a positive nod. It was also the only known KH merch available widely at Disney Parks, minus perhaps some in the Japan pavilion of Epcot.

Disney is likely a little more apt to promote the game given how seriously it’s penetrated mainstream pop culture. While Kingdom Hearts 3 was only sold on PS4 and Xbox One consoles, it topped sales charts easily across the world. In its January release month, sales tracker NPD shared that international sales were about two and a half times more of that than KH2. That likely means about 2.5 million copies were sold in the half-month of KH3’s release alone.

There’s also a DLC coming this winter, which means it’s a perfect time to get potential gamers on board.

The Oogie Boogie Bash starts tonight at Disney’s California Adventure; it requires separate admission from regular Disney park admission. Kingdom Hearts 3 is available on Xbox One and Playstation 4 for $60; the upcoming DLC appears to be free.