Over the past few years, Fortnite has transcended the traditional confines of a video game. It has simultaneously become a lucrative event venue raking in millions of dollars for performers like Ariana Grande and Travis Scott, while also dominating the battle royale scene as a metaverse with purchasable outfits and emotes of endless properties, brands, and personalities. Last July, in the wake of George Floyd’s death Fortnite went in a different direction, hosting a panel on race in America. It flopped horribly, with tons of people throwing virtual tomatoes at the screen and disrespecting presenters with a plethora of emotes.

Today, Fortnite partnered with TIME Studios and community developers in an attempt to educate their audience on race and civil rights one more time, now focusing on Martin Luther King Jr. and the 58th anniversary of the March on Washington. They also disabled a couple of emotes to avoid the previous snafu. I played through this Black history mini-game museum this morning, and frankly, it is beyond eerie watching Master Chief and Rick and Morty characters work together to unpack racism. While I understand that this is a project meant to educate youth on the historical exploitation of Black folks in America, it is a tonally misguided experience that feels inappropriate and insidious to be hosting in a colossally commercial digital environment like Fortnite. 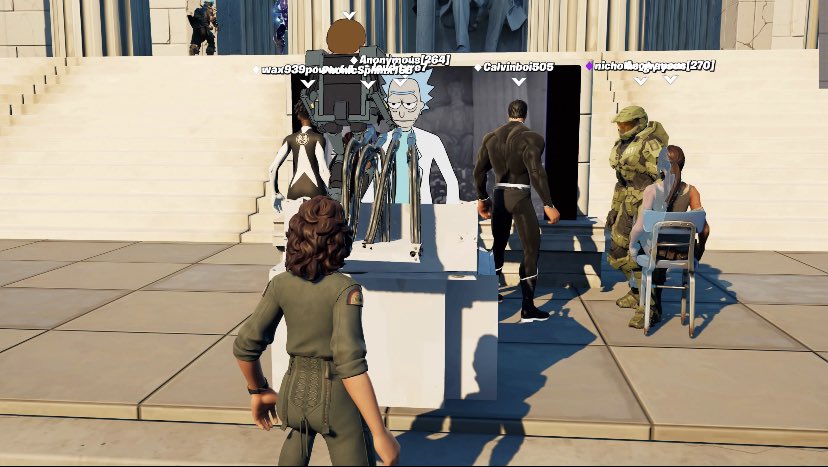 After queuing up in creative mode, you’re sucked into a TIME magazine portal that throws you into a recreation of Washington D.C. full of challenge sites including a relay race, a maze, and a people-stacking game outside of the Lincoln Memorial. All of these games have to do with vague themes of “hope” and “inspiration.” I queued up for “Climb the Mountain,” an activity that has you pushing a cartoonishly large basketball up a hill with a crew of my coworker Nicholas Grayson (Master Chief) and two Mortys from Rick and Morty. It was glitchy and not that entertaining, and once we got the ball to the top we were immediately teleported beside a Fortnite version of the Diner from the Greensboro Sit-in, a spot where four black men protested segregated seating. The transition from a barely engaging mini-game into a monumental piece of history is so mentally jarring. Me, Master Chief, and the two Mortys stood there stunned, staring at the neon diner lights wondering what we’re even doing here.

March Through Time’s D.C. setting feels flat and shockingly hollow, unlike the explosive and mind-bending visuals seen in other Fortnite events like Travis Scott’s Astronomical concert. The experience was developed by members of Fortnite Creative and received funding and contributions from TIME, American Family Insurance, the DuSable Museum of African American History, and the Estate of MLK Jr. , so I expected to see a more polished e-museum. Instead, you read black slabs of historical text in the Fortnite font while walking through mini-games to unlock a collectible “D.C. 63” spray.

This event doesn’t really say anything at all. It plops Martin Luther King Jr.’s face in the corner of the screen and plays an iconic speech while you can see the Joker running around doing the milly rock beside a Hot Dog man. Hopefully some youth learn more about history through this, but it is so bland and dissonant that I don’t see anyone earnestly engaging or learning with these systems. Fortnite still doesn’t know what it wants to be, whether its game, or venue, or educational service, and this event makes that incredibly obvious. Epic Games desperately needs to sit down and figure that out. Just because you can do anything in the metaverse, doesn’t mean you should.

V Rising Day Times Guide: How Long is a Day in V Rising?