The 5.1 patch for Final Fantasy XIV had a ton packed in already. In fact, it was so much, that they opted, as usual, to bring it in through several smaller patches. But these patches aren’t exactly small; FFXIV patch 5.1, especially, introduces plenty of new nifty things that fans looked forward to.

Are you the fighting type? The Epic of Alexander is giving endgame players a new extreme challenge. Are you the crafty type? Join the Ishgardian Restoration and race other worlds to, well, restore Ishgard. Are you the edgy type? Okay, you still have to get it somehow, but there’s a new emote and hairstyle that can make you look like the protagonist of a shonen anime.

Now that the patch and its patch notes are out, here’s the new stuff you can check out next time you venture into Eorzea, plus how to reach it all.

The Epic Of Alexander

Rearing to beat more hot robots up up? Then you’ve probably had your eye on The Epic Of Alexander, the latest Ultimate-level raid. It’s a boss-rush-style ordeal intended for high-level, hardcore endgame combat grinders. In short, don’t meander in so easily, or even without a coordinated effort of sorts. (In fact, you technically need a full raid party in order to enter!)

If you love cyberpunk nonsense in the style of Final Fantasy and NieR, this next installment of the Alexander raids will be another treat for your aesthetic-loving heart. But it won’t be easy to blast your way through each gorgeous mechanical god. If you do, though, there are a few treats waiting at the end for you.

If you want to give this a whirl, you need to have completed the Eden’s Gate: Sepulture duty on Savage. Then, find the Wandering Minstrel in Kugane. You need a full raid party of eight who have also completed the aforementioned duty in order to enter the raid.

If you’re more apt to some hardcore arts and crafts, your patch has arrived! The Ishgardian Restoration presents a series of gathering- and crafting-focused tasks. You may have to transport items or build structures within the city.

Most interestingly, With each task accomplished, the game gives the World (that is, a server) a little bit of progress towards restoration. You can see each world’s progress updated hourly on the FFXIV website!

It introduces an event called “Concerted Works” — like FATEs, but with an obvious spin. Concerted Works being at certain times after enough resources have been brought in. They require multiple players to collaborate in order to accomplish a task. Progress, of course, will be counted for the World’s total.

Doing all of these will also give you Skybuilder’s Scrips, a unique currency for these events. You can spend them on mostly cosmetics, including the fantastic ones that’ll be discussed later.

In order to start the quests, you need to be at least level 60 and have finished the quest “Litany of Peace” (yes, the one with the 15-minute cutscene). Once you’ve reached this point, you’ll find the Recruitment Notice in The Firmament.

This Extremely Good Emote (and other nice cosmetic stuff) It took way too long for us to get this emote. I’ve only been playing less than two months and this already feels overdue. But it’s here! It’s a very real emote! And it’s Very Very Good!!!!

Oh, there’s other stuff too. A lot of it is really fun!

Notably, the “Modern Aesthetics – Modern Legend” hairstyle makes you look like an anime character way more than any other style in the hair catalog. Like, seriously, look at this: 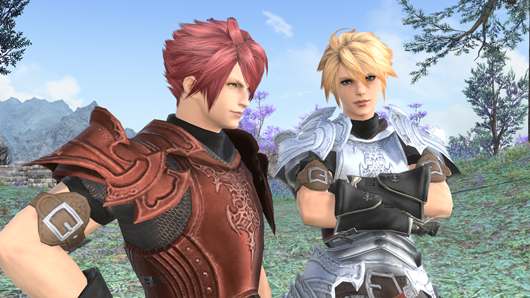 Players also noted that old Diadem minions and mounts are available through this system.

This is all mainly earnable through the Ishgardian Restoration’s currency, Skybuilder’s Scrips. However, these are also tradeable and marketable, so expect some extremely rich crafters very soon (or to become one!).