The developers for Final Fantasy 14 were excited to show off this Final Fantasy XIV-themed hotel room — except it's already gone.

Final Fantasy 14 has become a worldwide phenomenon, with fan fests, concert experiences, and expo booths around the world. Its latest collaboration moves the MMORPG’s aesthetic into The Royal Park hotel in Tokyo Shiodome, featuring a gorgeous faerie-themed FF14 room and tons of little practical perks.

But, of course, bad news always follows good news. In this case, every single night of the FF14 hotel room’s availability is already booked up. I can’t even tell you how much the rooms fetched for, because the rates per day won’t show. (Though a “deluxe” room in mid-April, on a weekday, fetched for ¥37,950, or about $345.)

But we can marvel at this room’s beauty from online, right!? The room takes after after the aesthetic of Il Mheg, known as “The Faerie Kingdom.” This lively, colorful region in Final Fantasy 14 is most known as the home to the Pixies. Sadly, the Pixies didn’t have much to do for players until the major patch 5.1 was released late last year. Now, players can take up side quests in order to earn rewards from the Pixies.

In the context of the room, the theming makes the room look super lovely. When you enter the room, the hotel room will play a welcoming movie from Il Mheg, with some of the regional music in the background. Ironically, the hotel hints at the Pixies’ ability to invade dreams… which seems like kind of an odd mix, you know, allowing people to sleep in a room with the theme of dream-invading creatures. But at least it all looks cute!

The theme isn’t just a pretty face, thankfully. This room comes with a few extra quirks to make your stay a bit more memorable. The FF14 devs showed of a cute mug to take home for everyone who stays in the room. Unfortunately, you can’t take anything else from the room home.

Fans also get some more digestible treats (literally). Each stay comes with one free drink at the hotel bar and lounge per person, which may include one of two original FF14 drinks: “Evergreen” and “Triple Colorant.” You can take the place-mat and the coasters these drinks come with home, as it sounds like they’ll be themed to FF14, too. (Obviously, kids aren’t allowed to have these drinks.) It also looks like guests get a free breakfast at the hotel with this package. 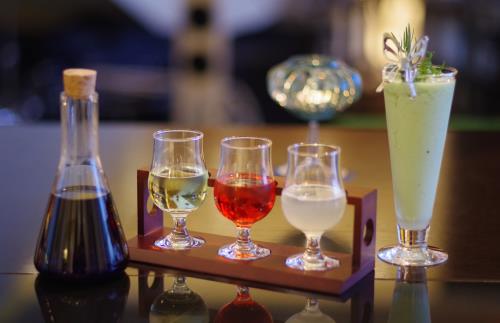 Need a little something to do while you’re laying around enjoying the scenery? It looks like The Royal Park has international television, but for this room, the hotel wanted to spice things up. You can download an augmented reality app onto your phone and interact with the room to find special “pranks” hidden by the Pixies. In fact, the page hints at these items being available for your FF14 toons, but the site only says a “picture frame” will be available. Who knows! Maybe that’s a frame for your house!

The one thing this hotel doesn’t seem to provide is a gaming computer. However, FF14 can run with more than bare-minimum specs on laptops. So if you’re really going to grind away instead of exploring, you know, the goddamn city ofTokyo, be our guest.

If you missed out on this experience (which you most likely did), you have plenty to look forward to in the future. Hotels are increasingly accommodating “nerd” or “gamer” experiences. “Gamer hotels” are popping up around the world, featuring wired-internet gaming computers. Most seem to be for single gamers looking to get out of the bedroom, but a few have “team” rooms with multiple computers and bunk beds. Recently, a mystery construction company announced a series of Atari hotels, with the first breaking ground in Phoenix, Arizona, later this summer.