Where in the world and at what world height to mine for the most gold ore.

We’ve gone through an entire Minecraft patch cycle since Mojang completely overhauled the world’s ore distribution system. With it, the old Y=11 rule was retired and now you need to have an entirely different strategy depending on which ore you’re looking to find. While it’s easy to remember that old traditions no longer apply, it’s harder to remember exactly which world level is the most likely to have what you’re looking for. In this guide, we explain where you can find gold ore and what the best single height is as far as density goes.

What is the Best Level/Height to Find Gold Ore?

You can find gold ore between Y=-64 and Y=256, making it the only ore in the game that can be found at every single world height. There are three different sections of gold. The most basic is a solid distribution below Y=-48 down to the bedrock. You’ll find some gold ore down here if you’re digging for diamonds, but it’s not the most efficient place to search.

There’s also a triangle shaped distribution from Y=-64 to Y=32 with a center point at Y=-16. This is the best spot to mine unless you’re in a Badlands biome.

If you do have access to a Badlands biome, gold ore is widely available from Y=32 up to the world generation limit at Y=256. It doesn’t matter which world height you’re at, it’s just as likely to generate, and at a much higher frequency.

Therefore, the best place to mine for ore is in a Badlands biome at Y=32 as land is more likely to exist the lower you are. If you don’t know what level you’re at, hit F3 to display your current information and look for the XYZ values.

An important change, however, is the added effect of reduced air exposure. From a technical standpoint, this means when the world is being generated and a gold ore block is about to be placed in a location where it would be exposed to open air (like in a cave), there’s a chance that the ore will be skipped instead. In short, this means there is a higher chance of finding gold ore if you’re mining.

Want to see the changes for yourself? Here’s the official ore distribution map from Mojang. 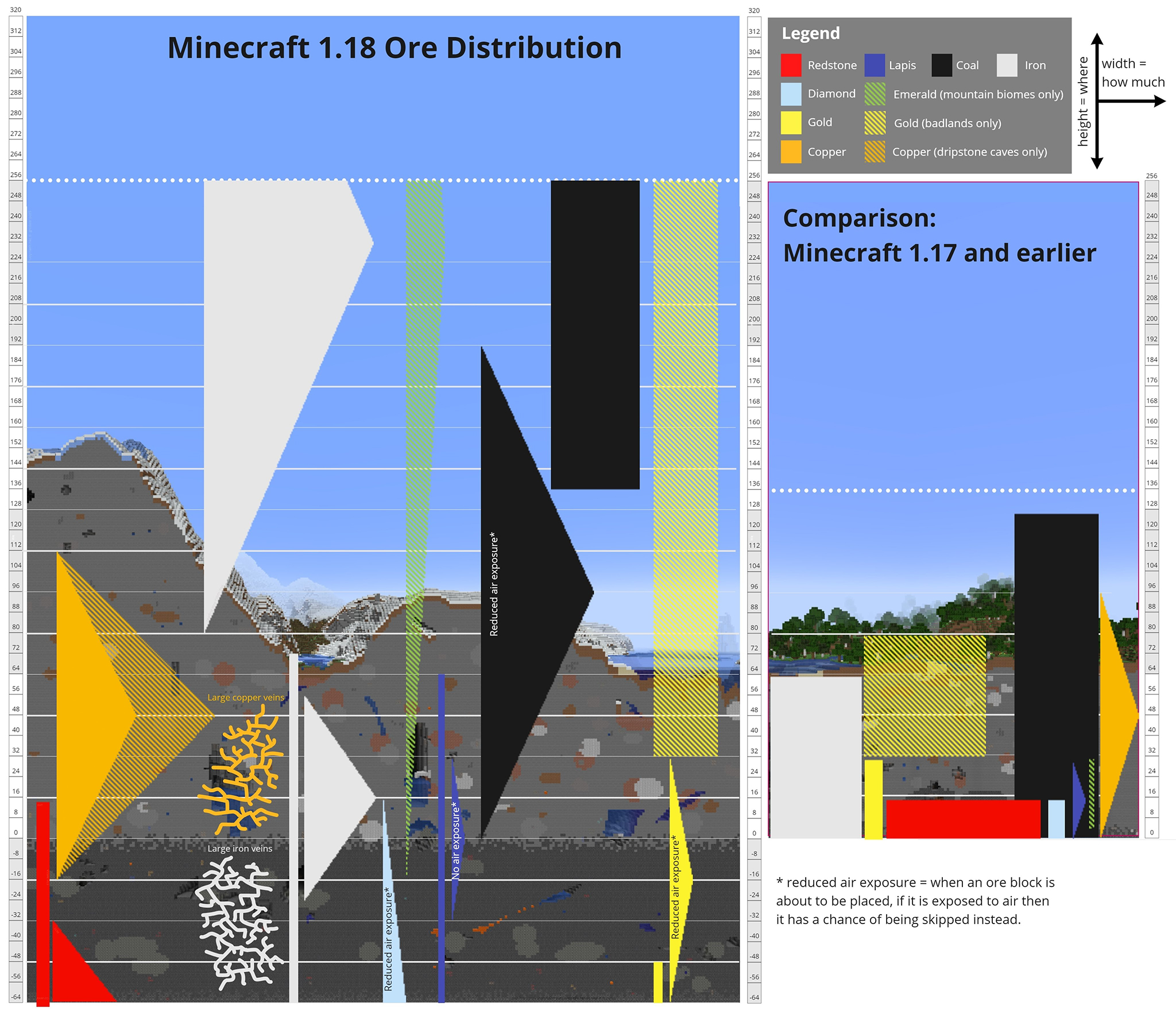 It’s a bit hard to parse, but you see that solid gold block in the comparison? That means gold ore was equally likely to spawn at all of those levels, with an exception for the Badlands biome just like there is not. In the new distribution on the left, the ore now becomes more and more prevalent as you approach Y=-16 when underground with the exception of near bedrock where it’s not as frequent, but is more common than it would be otherwise.

While you’re here you can use that chart to figure out where to get the other ore types, but we’ll also be writing up guides to help decipher it all since it can be a big confusing. Hope this was helpful!