Turns out not even COVID-19 could stop the biggest party of the summer. Suck on that, Coachella. WWE took us back to the ThunderDome for Asuka vs Sasha Banks, Asuka vs Bayley, and I guess some other matches too. This show held up pretty well, especially when compared to a disappointing TakeOver last night, but don’t worry, there’s still plenty to be mad at this company for. 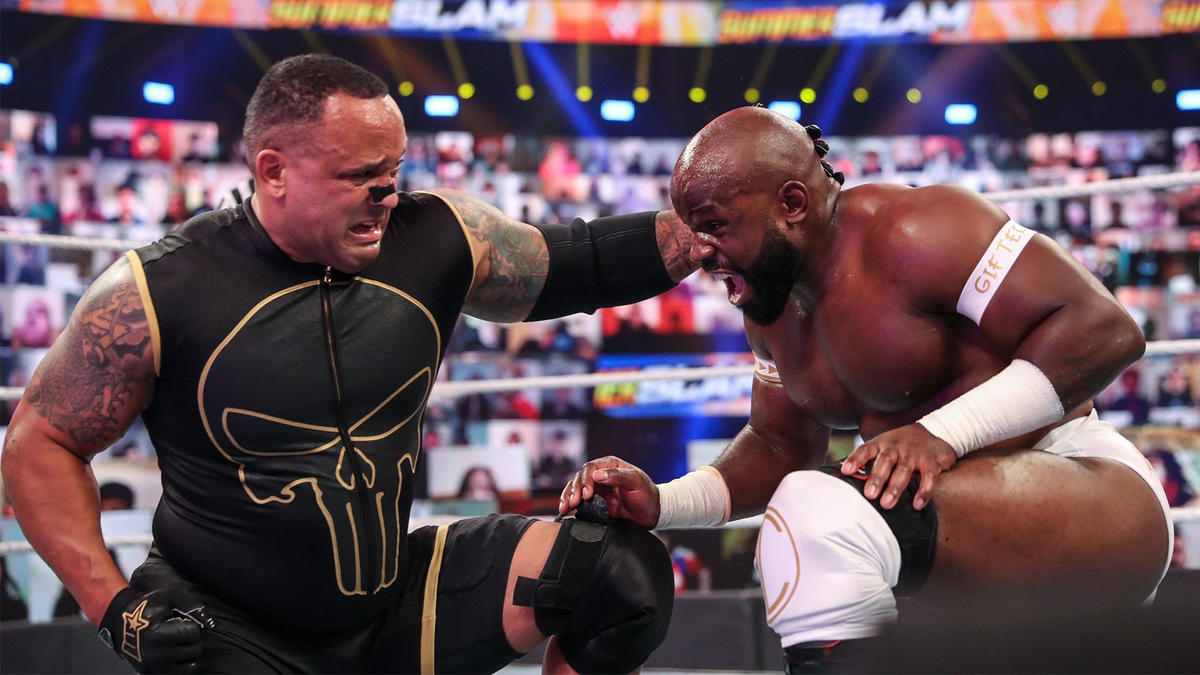 Apollo wore white and gold gear for this one, and he looked like an actual angel. Like all preshow matches, this one was a little too short, but we got to see some good action from Crews, who tried to overwhelm MVP with his agility early on. MVP slammed him into the apron to take over for a little, but Apollo bounced back with a dive onto the outside. MVP went for the Playmaker, but Apollo hit a power bomb and retained. Right away, Shelton Benjamin and Bobby Lashley ran down to attack Crews, but he managed to slip away. This wasn’t particularly exciting given how much we’ve seen Crews and MVP go at it on Raw recently, but it was fine. 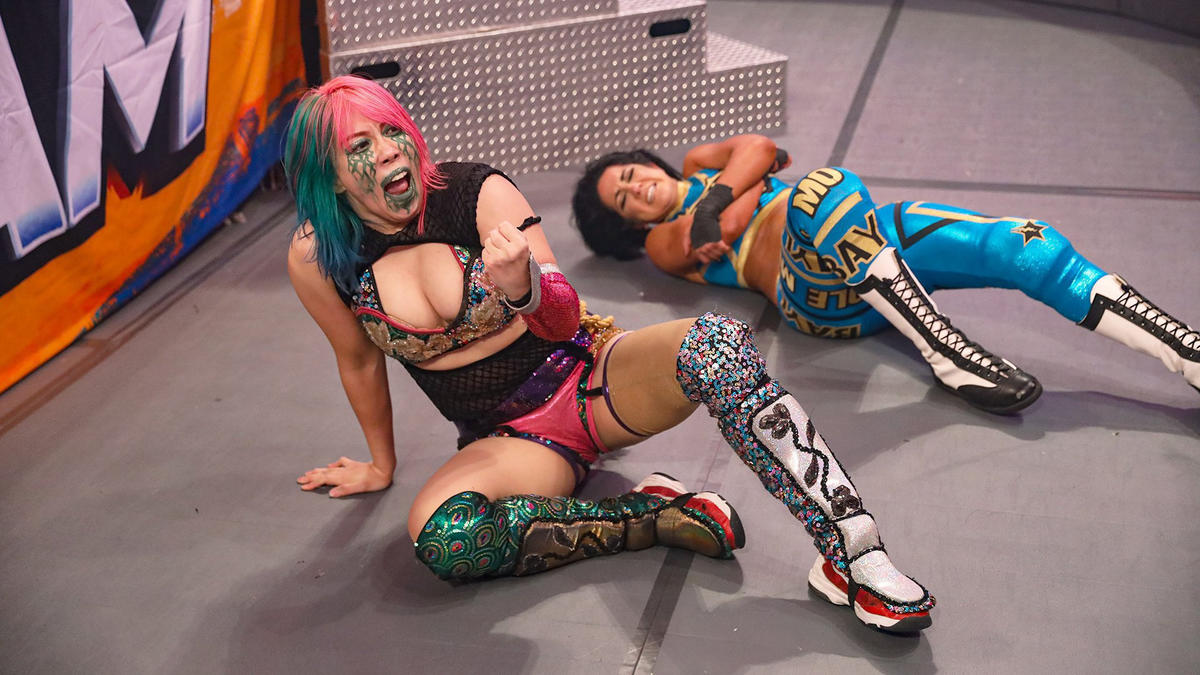 I was so preoccupied thinking about how excellent Asuka and Sasha part 2 would be, that I didn’t even think about Bayley and Asuka putting on a banger in their own right. This felt like a bit of a surprise to open the show, but it definitely kept my attention. Asuka dominated early on, but Bayley bounced back even after a face buster on the outside. She hit a Bayley to Belly for a two count, then focused on taking out Asuka’s knees. Asuka fired back with some shots, Bayley went up top for the elbow drop and got caught in the arm bar. Asuka broke the hold to take a swing at Sasha yelling mean things on the outside, and Bayley almost got the win with a roll up. Sasha jumped up on the apron to call Asuka more names, and ended up taking a hip attack meant for Bayley, allowing the champ to roll up the Empress and get the win. An unexpected result in my mind- it unfortunately suggested what was going to happen in Asuka/Sasha later, but that didn’t end up making their match any less engrossing. 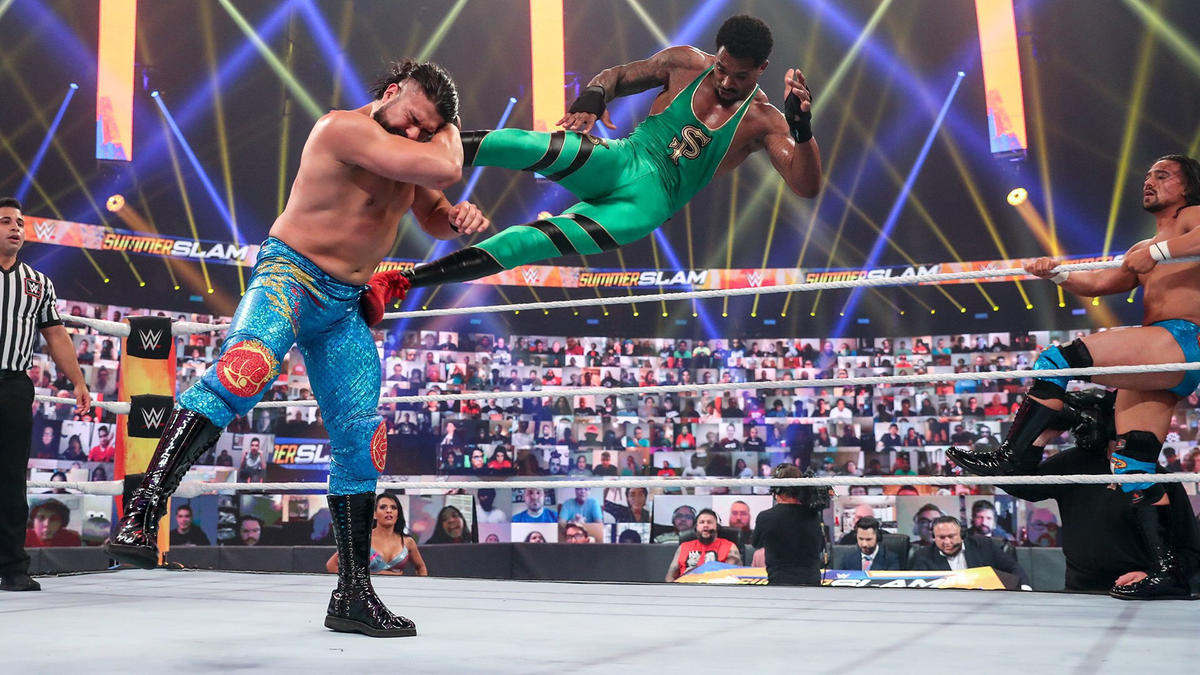 Kevin Owens joined commentary for this one, which is always a treat. The Street Profits started out hot, Ford taking out Andrade and teaming with Dawkins to knock out Garza as well. He tried to dive over the ropes but was caught by the heels, who spiked him on the outside. They dragged him into their corner and unloaded; Dawkins didn’t make the tag until 3/4th of the match was over. This one never really felt like it hit its stride, which is unfortunate. Despite seeing these two teams go at it half a dozen times in the past two months, a well planned match between them should have still been good. Instead, this one felt rushed, with Dawkins getting limited action as Ford tagged back in. He accidentally knocked a shrieking Vega off the apron, leading Andrade to check on her. Garza was left alone in the ring and ate a spine buster from Dawkins, then a huge splash from Ford, and the Street Profits retained. They celebrated ringside with a jovial Kevin Owens, while Angel argued with Vega and Andrade. Will we ever actually see Garza and Andrade break up or are they truly frenemies for life? 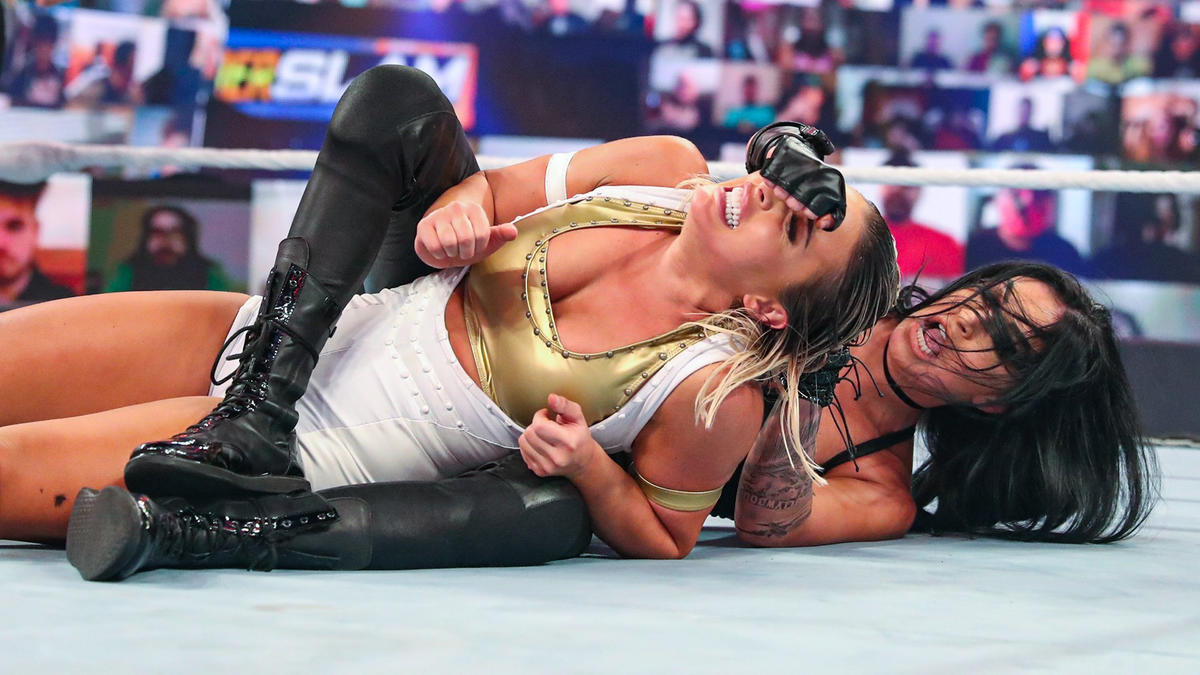 Instead of hair vs hair, this became a career match this past week on SmackDown. I’m not going to speculate about why because it’s obviously none of our business; I can only hope they each feel safe and comfortable moving forward in their careers, whenever and wherever they may choose to do that. On top of that, I can’t imagine the match we got last night was their original vision either, and you can’t blame either wrestler for that. Real life has a way of impacting fake fighting whether we like it or not.

That being said, I thought the effort from both was on display. Mandy came out with a completely new look and gear, while Sonya rocked the Assassin’s Creed duster on her entrance. This started off with Mandy in control- she attempted a few knee strikes that didn’t land, and lost the upper hand when she fell into the classic wrestler trap of being unable to set up a table. Sonya hit her with a chair and even got her in the Dragon Sleeper, then an armbar, but Rose escaped. She laid Sonya out with some punches and tried to get her on the table, but Sonya rolled out of the way. She dodged some thrown chairs, but three knee strikes in the ring got Rose the win, sending Deville packing. Otis came out to celebrate, and Rose did a very awkward looking caterpillar. I love watching extremely hot people be bad at stuff. 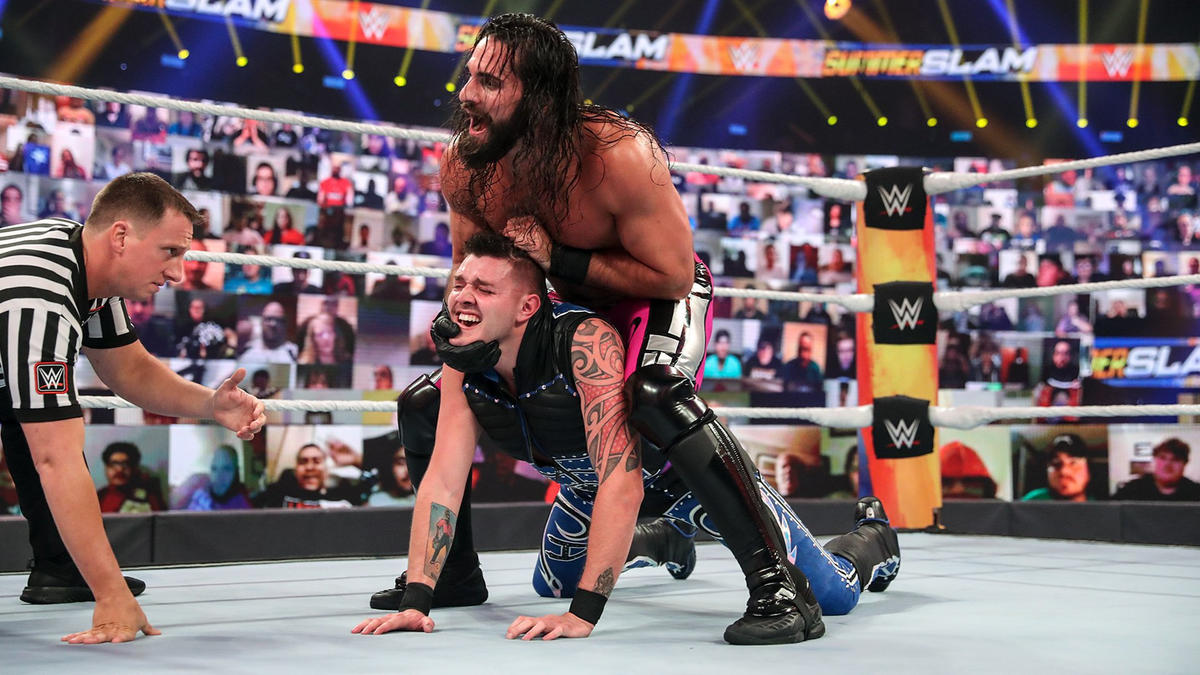 Rey was ringside for this match, but Dominik made him promise not to interfere. If he’s anything like my dad, there’s zero chance Rey was listening to a word Dom said. Seth was rocking the Halloween Havoc ‘97 look, because he’s just petty like that. Dominik took a few minutes to get comfortable, but quickly showed off some offense against Rollins. Seth tried to use a kendo stick, but Mysterio took it and left some welts on the Messiah’s back. Seth regained control and tried to goad Rey into helping his son, but Dominik kept telling him not to. Rollins tried to put Dominik through a table, but he pulled off a Russian leg sweep to send them both down. Seth suffered a frog splash and kicked out at two. He got the upper hand with a powerbomb, then grabbed some handcuffs from Murphy at ringside to shackle Rey to the ropes. He teased going after Angie, Dominik’s mom, to really cement his status as an comic book villain, but Dominik got him from behind. 619 and another frog splash couldn’t put Rollins away; he got his knees up and hit Dominik with a stomp a couple feet away from where his dad was forced to look on with one good eye. This one was really enjoyable, proving that maybe, on occasion, WWE knows how storytelling works. Great debut for Dominik and a good effort from Seth. Ran a little long for me, but that’s about my only complaint. Also, maybe Rey Mysterio should stop bringing family members to work. Just a thought. 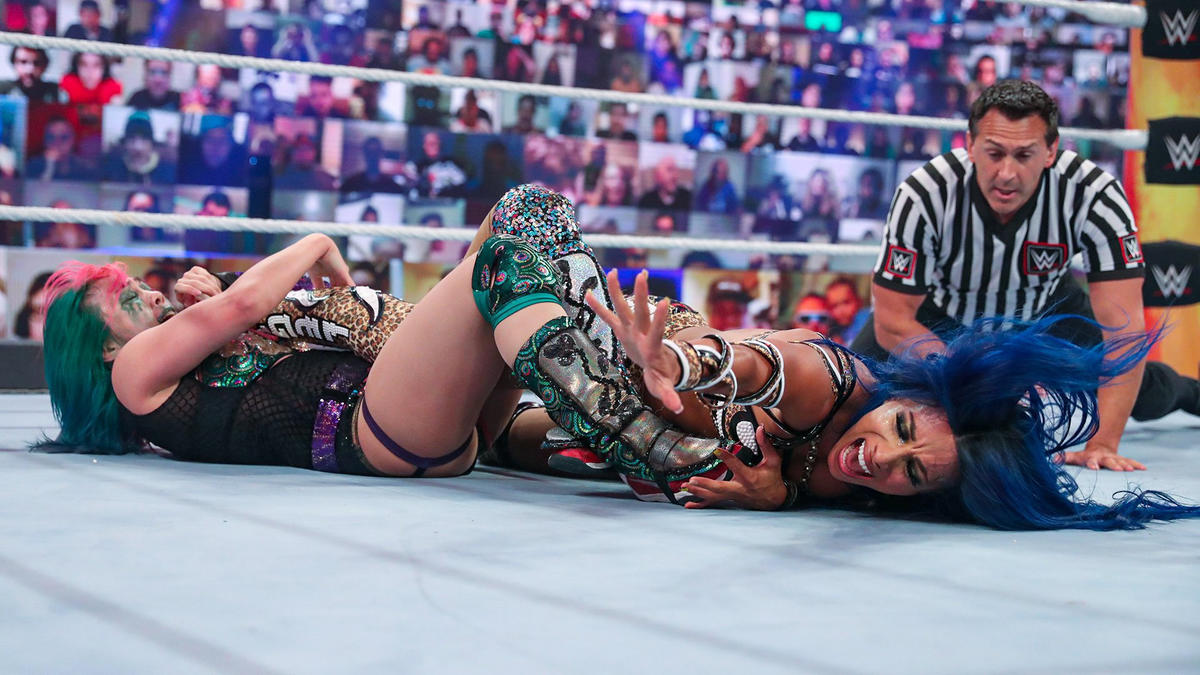 To the surprise of no one, this was really fantastic. Both women really gave it their absolute all, which is extra impressive after Asuka put on a great show with Bayley just an hour ago. Sasha controlled the match by targeting the knee early on. She hit an insane sunset flip off the apron onto the outside, but Asuka snuck back in at a count of 9. Both women pulled out multiple submissions, including going from the Asuka Lock into the Bank Statement, and rolling back into the Asuka Lock again. It’s insane to see these women make it look so fluid. In what writers refer to as a “callback,” Bayley got up on the apron to yell at Asuka and narrowly avoided a hip attack, but got knocked with a backfist. Sasha tried to land the Code Breaker, but Asuka countered into the Asuka Lock. With Bayley on the outside, Sasha was forced to tap, and Asuka regained the title. This match was great, and the outcome isn’t bad- Asuka’s obviously deserving- but it continues to be more than a little bullshit that Sasha can’t make a single successful title defense. 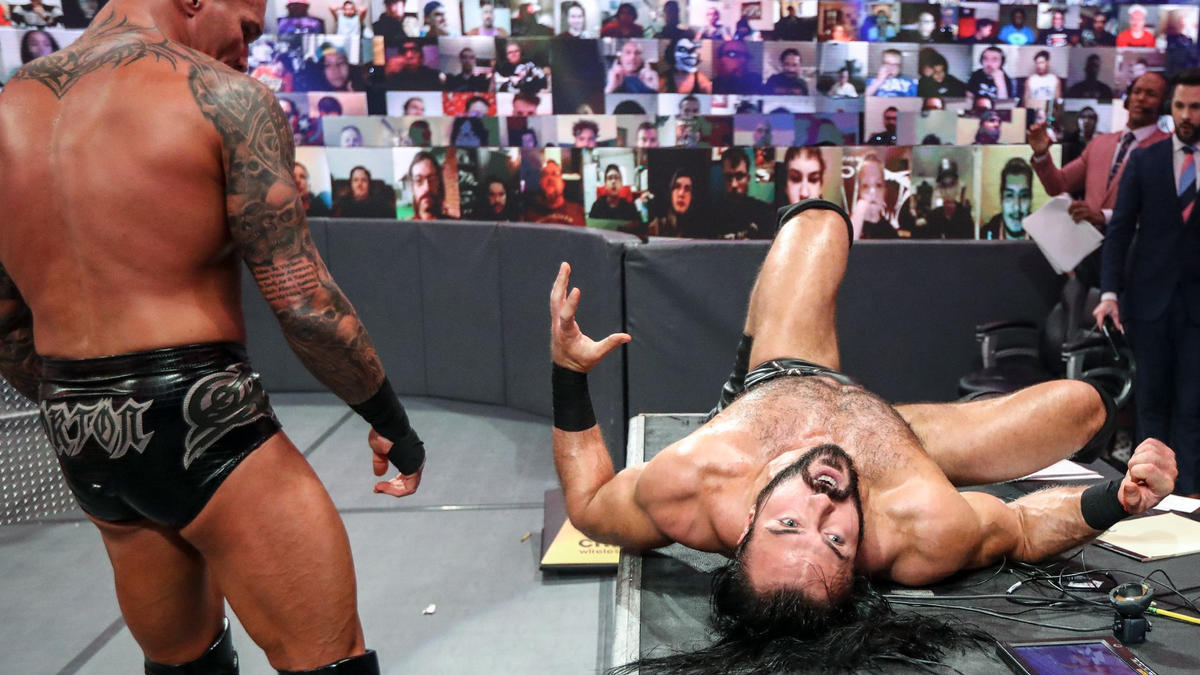 Drew came out without the duster, which already made him lose face in my book. Orton started out refusing to stay in the ring, slithering outside like some kind of poisonous reptile. McIntyre got pissed, but when he went to attack, Randy easily fought him off. They brawled on the outside for a little bit, each looking for their finisher but unable to get it. After being slammed around on the outside for a bit they both made it back in the ring, and Drew locked in the Figure Four to remind Randy of the old man he kicked in the head a few days ago. Orton pulled the ref out of the way then gauged McIntyre’s eye, forcing a break. Randy hit the draping DDT, but it wouldn’t keep McIntyre down. Both men got frustrated and angry; Randy pounded the mat for an RKO, but didn’t make it happen. The finish came when McIntyre missed the Claymore and countered an RKO attempt into a backslide. He then told Randy that the championship doesn’t belong to him, it belongs to everyone. What a polite young man. This was a great, physical match from both guys, and actually made me interested in a rematch. 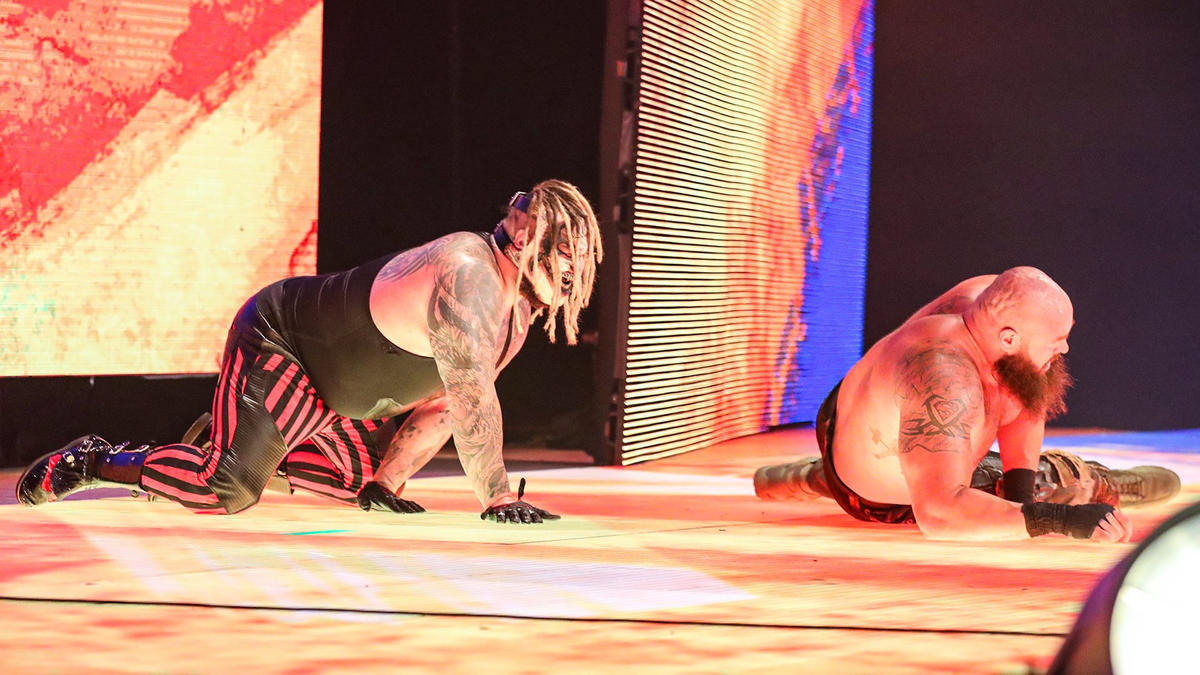 Remember when The Fiend made his in ring debut last SummerSlam and snapped Finn Balor’s neck in like three minutes? That was great. This one doesn’t have quite the same mystique. I’m gonna keep it real: this was boring for me. I think The Fiend is a character who needs the cinematic matches to really work, because the spooky tricks and camera angles are what sell him best. At the very least, he needs more of a gimmick to the match- “falls count anywhere” was barely used here. These dudes went into gorilla for like twenty seconds before coming back to the ring. What was the point of a stipulation at all? There were lots of big guy moves as you probably expected- Strowman tried to throw Wyatt around, The Fiend did the neck snapping move twice, but it seemed to barely effect Braun. A rejuvenated Strowman chokeslammed Wyatt into the commentary desk, bounced him off the steps, and hit a power slam, but still The Fiend kicked out, because nothing is scarier than refusing to sell for your opponent. They wandered backstage for a hot minute, but the Fiend took over and dragged Strowman back into the ring. Braun rallied back with some fists and went to the toolbox, taking a box cutter and ripping up the mat to explode the wood. The Fiend popped up unharmed and hit two Sister Abigails onto the wood to win. I felt absolutely nothing watching this unfold. This match was the equivalent of the Dr Phil episode they play in the dentist’s waiting room. Just background noise while I’m scrolling through my ex’s Instagram.

Post match, The Fiend was speared by a returning Roman Reigns (!!!), who then laid into Strowman with several chair shots, telling Strowman that Braun was nothing without him. He got back in the ring to spear The Fiend again, and that’s our show.

The whole show wrapped up before 10 PM, so I really can't be all that mad.