Why does a professional wrestling company need to keep so much gasoline around anyway?

‘Twas the night before TLC, and all across the brands, there was a lot of over-bloated action to churn out. Grab your puppet friends, don your goth kilts, and hop in the magic funhouse bus, we’re checking out the very crowded week in WWE. 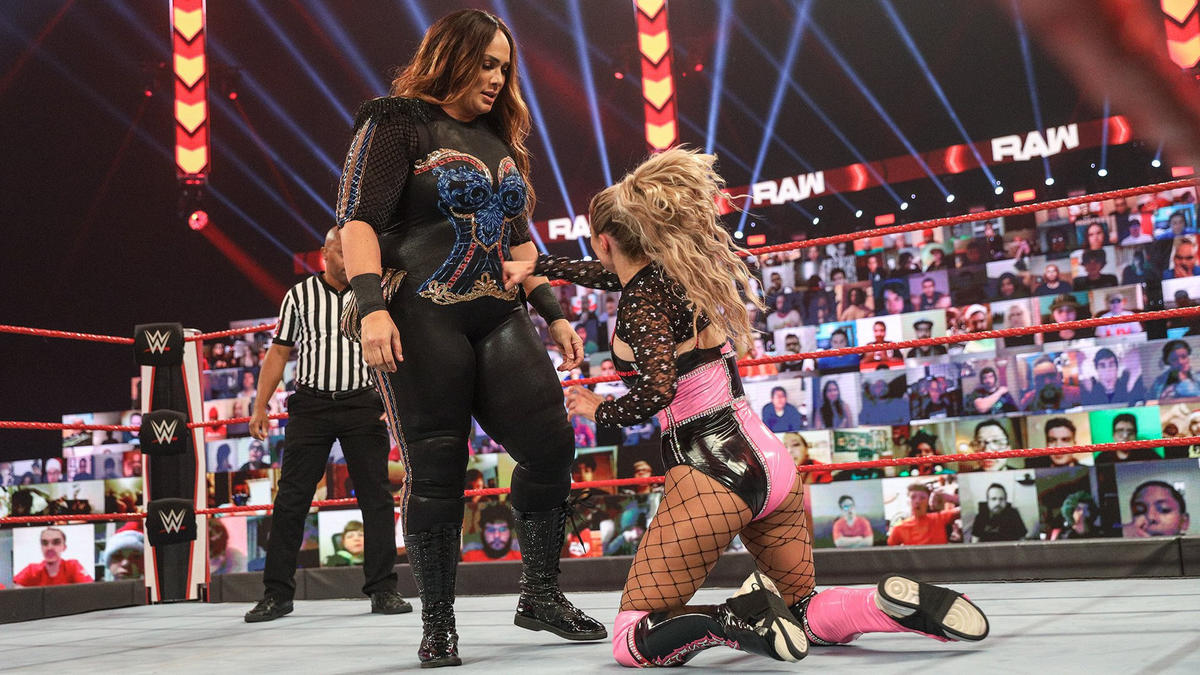 It feels like WWE really could have nailed Lana’s underdog face journey, but that would have involved more to the story than just going through a table. She went one on one with Nia Jax on Monday ahead of her planned tag match at TLC. Jax unsurprisingly dominated early, but Lana managed to hit a hurricanrana to knock her down. Nia delivered a headbutt, but Lana reversed a Samoan Drop attempt and delivered a kick to Jax’s knee, then rolled her up for the sudden win.

Backstage, Shayna Baszler attacked a celebrating Asuka while Jax ragdolled Lana in the ring. Baszler and Jax went to town on ruining Lana’s bone structure, including two leg drops to her exposed knee. Asuka came for the rescue, but the damage had already been done, and it looks like Lana can’t make it to TLC. Asuka’s going to have to find a new partner, once again throwing together two singles wrestlers to challenge for the tag team titles. I don’t know why WWE is so in love with that idea while they continue to split up actual teams, but here we are. 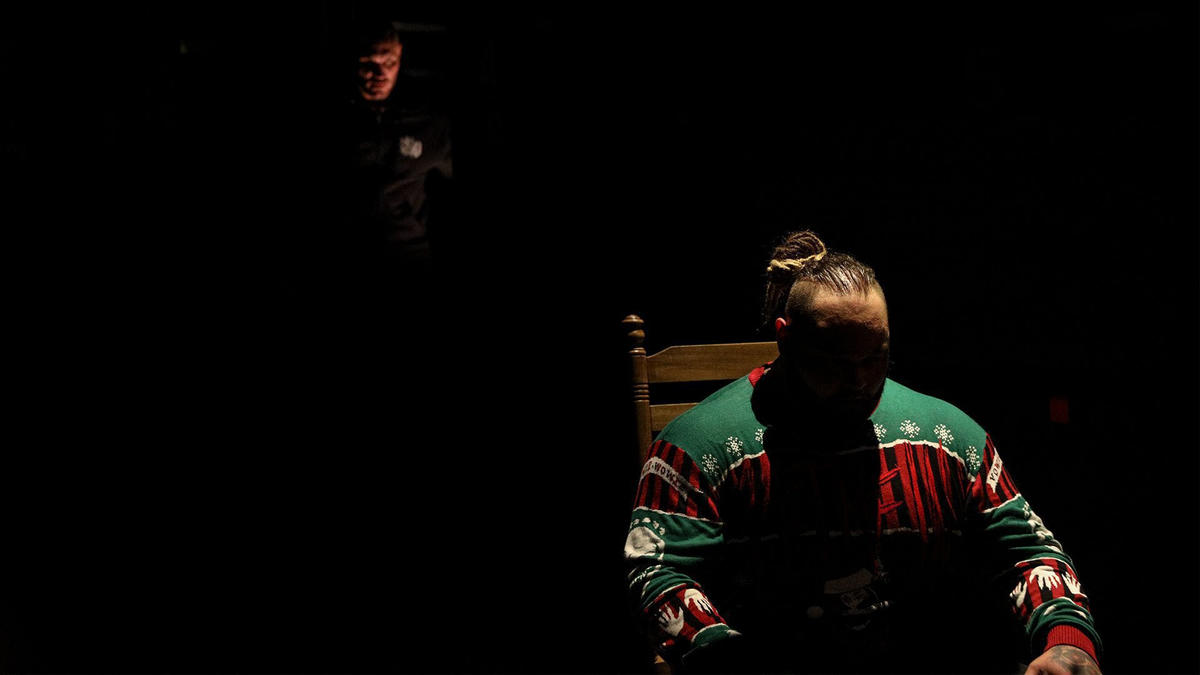 Bray Wyatt announced a Firefly Funhouse Thunderdome Field Trip on Raw, taking his puppets to experience Tropicana Field firsthand. He told Orton he was sorry they didn’t get to finish things last week, but The Fiend got a little overzealous about fingers in the mouth. Wyatt then dropped a new comedy set of snake-based jokes, absolutely sending his furry friends.

Unfortunately for the development of new comedians, Orton interrupted on the tron. He didn’t even try to make it open mic night, but he did invite Bray to play hide and seek and come find him in one of the many badly lit back rooms they use for promos. Wyatt stumbled upon a rocking chair in a dark room, surely a calling card for him exclusively. As Bray took a moment to rest his legs, Randy jumped him from behind.

They fought out into the hall, where Randy locked his foe in a handy person-sized crate that was just sitting out there for any old reason. For the finishing touches, he doused the whole box in gasoline and let her rip. I guess Adam Pearce was busy with something because absolutely no one came out to check on one of their employees being burned alive. The Fiend emerged from the crate unscathed and hit Randy with the Mandible claw again, choking out The Viper on the concrete. 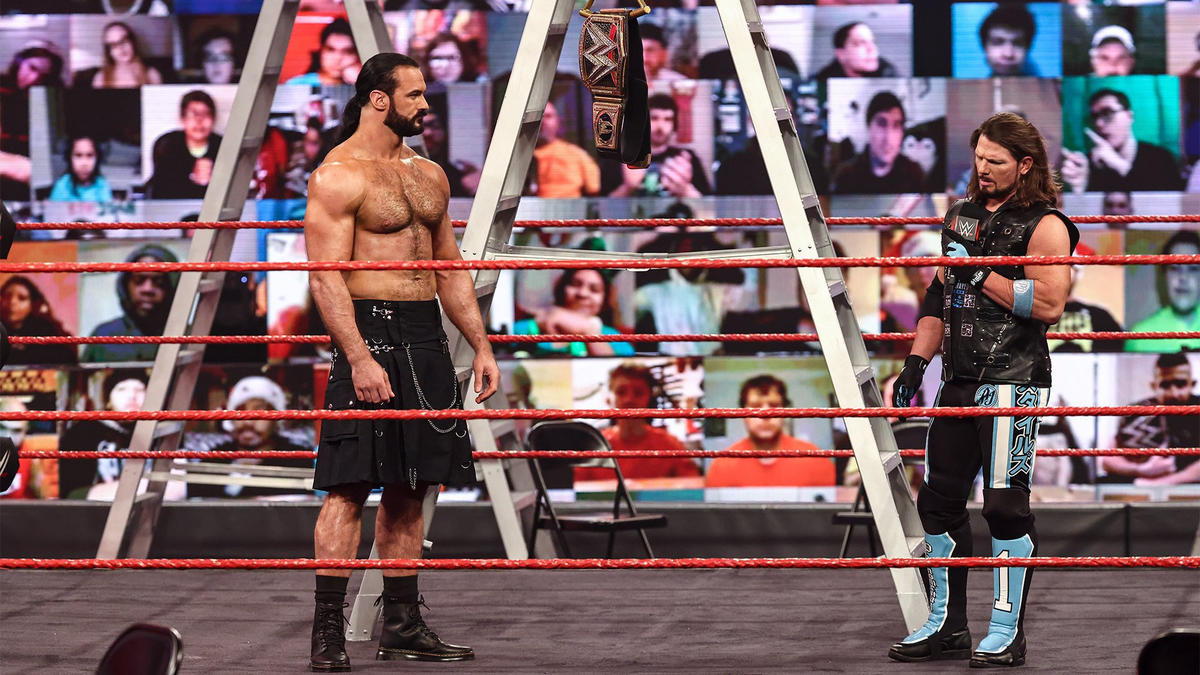 After assisting in a performance from Miz’s theatre group, AJ Styles faced Sheamus to prep for his bout with McIntyre this Sunday. Sheamus dominated things early on, but Styles delivered a series of kicks to his left leg that wore him down. Sheamus had Styles on his shoulders on the outside, but Omos grabbed his BFF like a naughty toddler and casually lifted him away.

Back in the ring, a pump knee almost got Sheamus the win, but Styles just kicked out. AJ kept after the leg, locking him in the Calf Crusher. Sheamus escaped to hit the Irish Curse Backbreaker, but Styles kicked out again. Sheamus tried to go up top, but Styles hacked at his leg to make him fall back to the mat. A quick roll-up got AJ the win and he celebrated this victory by tying Sheamus up in the ropes and nailing him a few times with a chair. Once again, McIntyre failed to come to his buddy’s aid. I guess that sword didn’t come with any friendship tips.

Later in the night, Styles and McIntyre attended a Championship Ascension ceremony, which is the time-honored tradition of making a virtual crowd watch a championship belt rise 15 feet in the air. AJ reminded Drew that he’d never been in a TLC match before and that 19 years is an embarrassingly long time to pursue your dreams and have them come true. He told Drew to kiss the championship goodbye, which lead to a lengthy promo from a man in a Hot Topic kilt promising that he would do whatever it takes to keep the title.

AJ reminded McIntyre that it wouldn’t just be him who the champ had to face on Sunday, and out came Miz and Morrison. Morrison ate a Claymore through the ladder, but a distraction from Omos let Styles hit the Phenomenal Forearm to lay out McIntyre. Another shot from the ladder and AJ climbed up to pose with the title to end the show. Styles’ chances seem slim this Sunday, but his partnership with Miz has been weirdly entertaining, and every time Omos picks him up is good for a laugh. 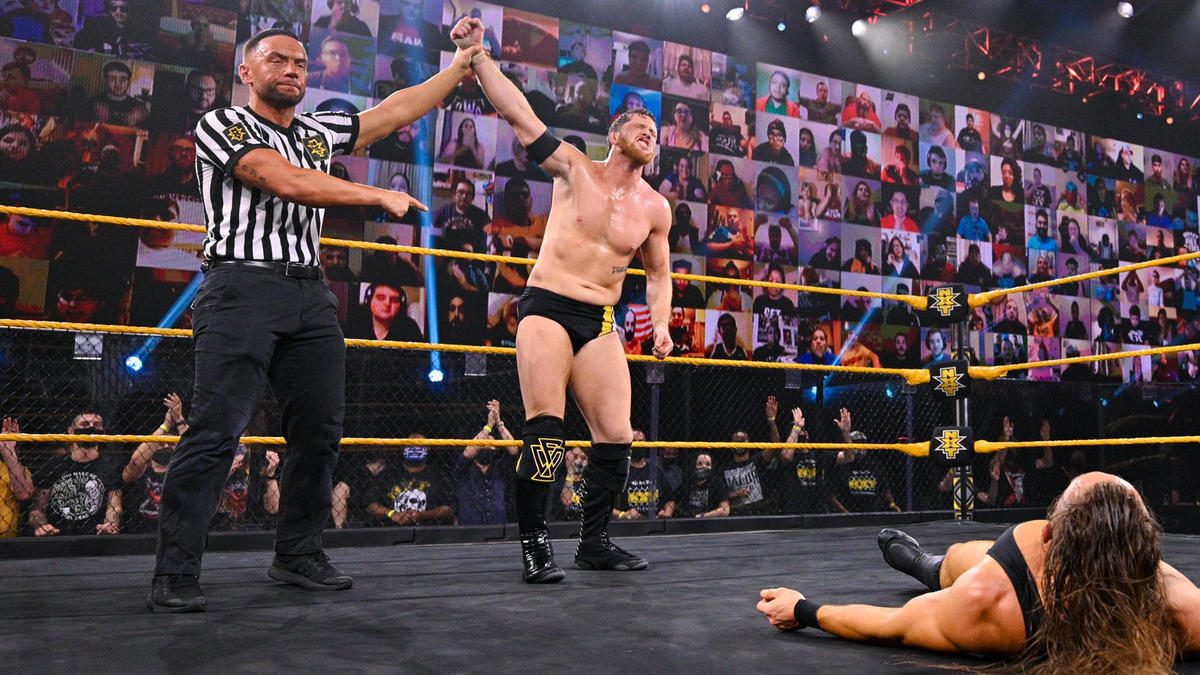 Once More With Feeling

It’s been a big year for air guitar frontman and beagle enthusiast Kyle O’Reilly. In addition to being part of one of the only consistently good things in NXT, he took champion Finn Balor to the limit and broke the man’s jaw last month, setting in motion a series of events that would allow Balor to utter the phrase “the cat is back,” so huge thanks to Kyle on that one.

This week, KOR once again took on Pete Dunne to determine Balor’s next challenger at New Year’s Evil. Don’t know why I bother making dumb jokes on this website if WWE keeps putting out titles like that for free. The match was fantastic, which wasn’t surprising given previous encounters between the two. O’Reilly and Dunne tore into each other straight away, going back and forth on the mat and laying in with tough strikes. After we almost got an early count out, Dunne took control. He used several harsh kicks to beat Kyle down, then stuck him in the Tree of Woe. Pete delivered a series of stomps, but O’Reilly continued to fight back. He reversed the Bitter End to send Dunne to the outside, then hit a diving knee to the back of his head for the win. O’Reilly and Balor were excellent together, so I’m really looking forward to seeing another match there. We might even get Kool Champ Kyle. 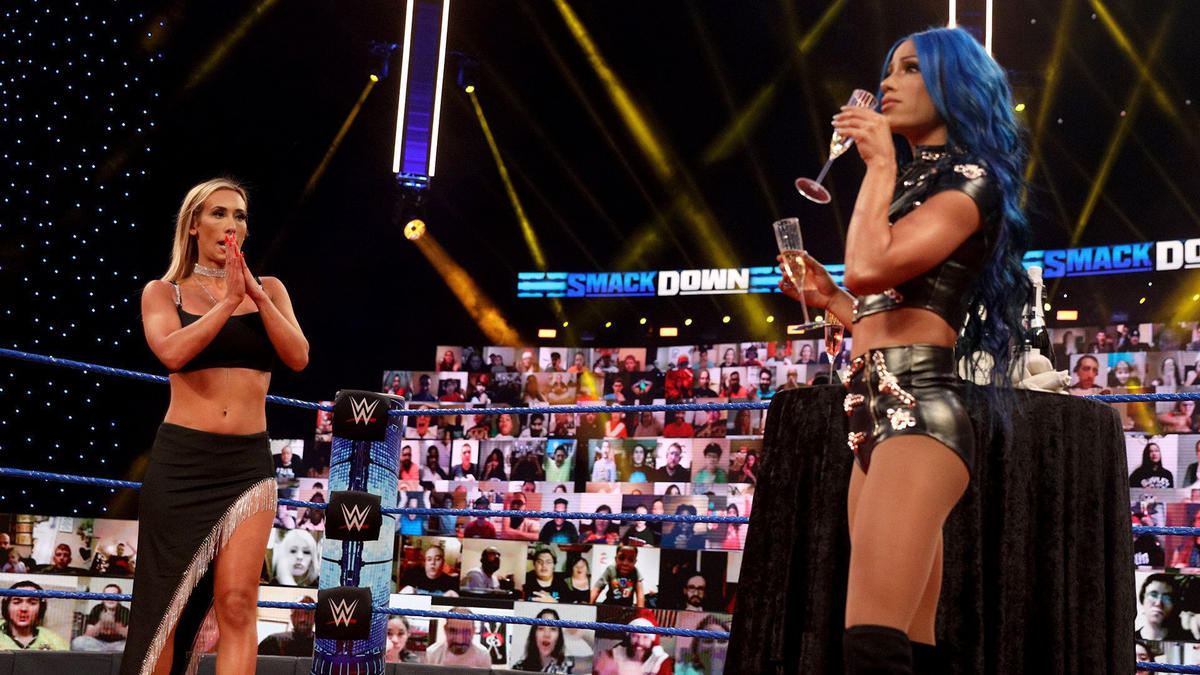 After busting a champagne bottle on Sasha’s back last week, Carmella toasted to her own expected TLC victory last night. Her sommelier stood patiently as she serenaded us with an ode to champagne and the downfall of Sasha Banks. She said The Boss would fall victim to her own pride at TLC, but Carmella openly advertises custom wine on the Fox network so pride isn’t an issue for her.

We moved onto the tasting, with Carmella labeling the first glass “cheap and frantic,” much like Sasha herself. The champ crashed the party like she crashed Moff Gideon’s cruiser, but Carmella fired back with another champagne bottle to Sasha’s spine, crumpling The Boss on the mat. Carmella and Mr. Sommelier stood tall to close the segment and probably get moderately drunk.

This feud has been a little too alcohol focused for me; Carmella’s promo skills are her great strength, but it seems like the only direction she’s been given now is “pout but in a sexy way.” I can’t say I’m too stoked for their match on Sunday, but Carmella has improved in the ring over the past few years, and Banks is good at getting a solid match out of almost anyone. 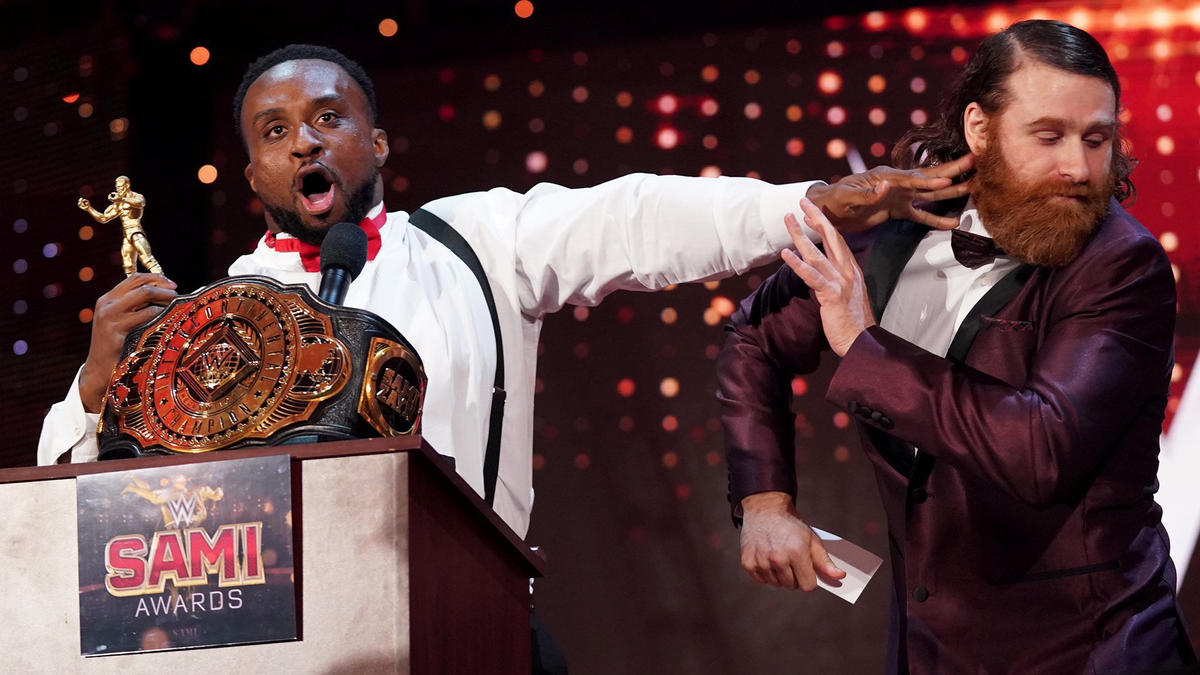 Sami Zayn hosted his own wrestling awards on Friday night, appropriately dubbed the Sami Awards. Zayn wore a fresh maroon suit and gave next week’s Slammy host R-Truth a run for his money as he gleefully gave himself awards. Maybe it was the hair gel, maybe it was the fact that Sami can pull off literally anything, but this segment actually landed for me.

Big E was listed as Superstar of the Year, much to Sami’s displeasure, and E delivered a fantastic acceptance speech until Sami cut him off. Big E laid into the IC champ, rolling him down the entrance ramp and busting the Sami award in half. Both Big E and Sami have enough charisma to carry just about anything, so it’s no surprise this feud is already working in my book. After their match last week and both men’s formal wear this week, I’m excited to see what else these two have in store. 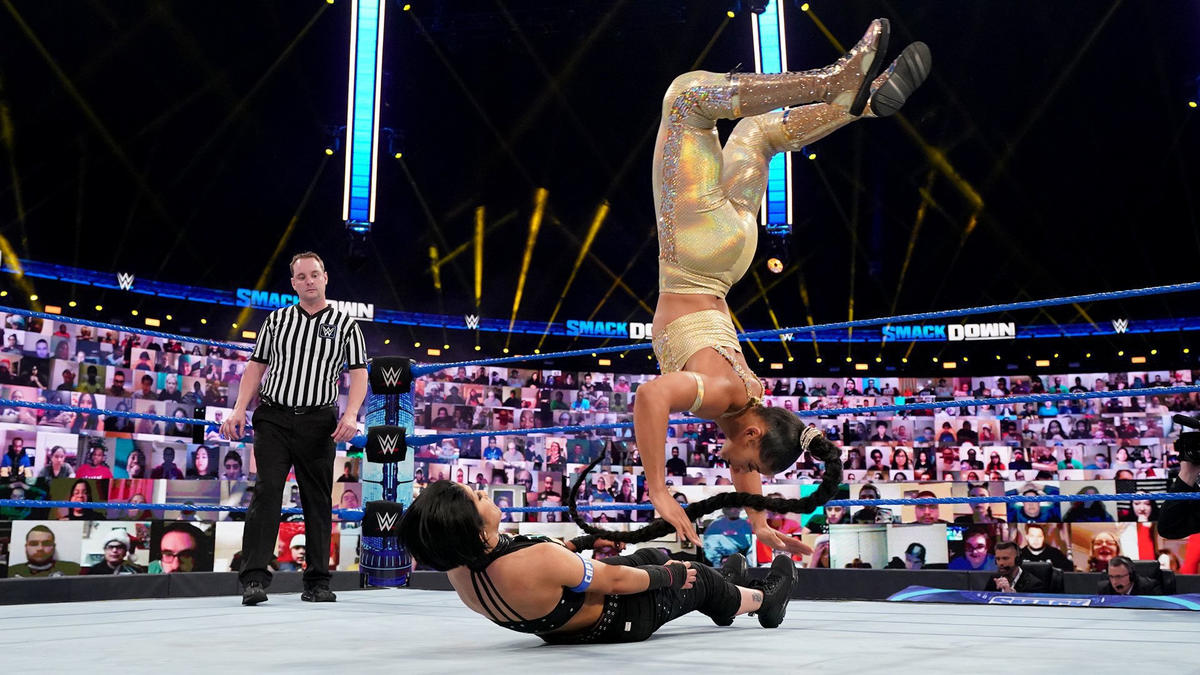 After weeks of trash talking, Bianca and Bayley finally met in the ring. The EST showed off early, beating Bayley with her athleticism. An early pin got her a two count, but Bayley tripped her up on the apron. The Role Model took control until Belair threw her into the steps. Bianca landed a big vertical suplex and a springboard moonsault, but Bayley kicked out again. Belair launched her into the top turnbuckle and delivered a spine buster, but Bayley still kicked out. She seemed able to get out of anything Belair hit her with, escaping from an attempted powerbomb by raking Bianca’s eyes, then finally hit the Rose Plant to score the win.

My only complaint is this felt a little rushed; I would have watched another ten minutes of these two. Bayley is a fantastic opponent for Belair to gain footing on the main roster, and the chemistry here was excellent. Looking forward to seeing the Role Model get KOD’d into 2022. 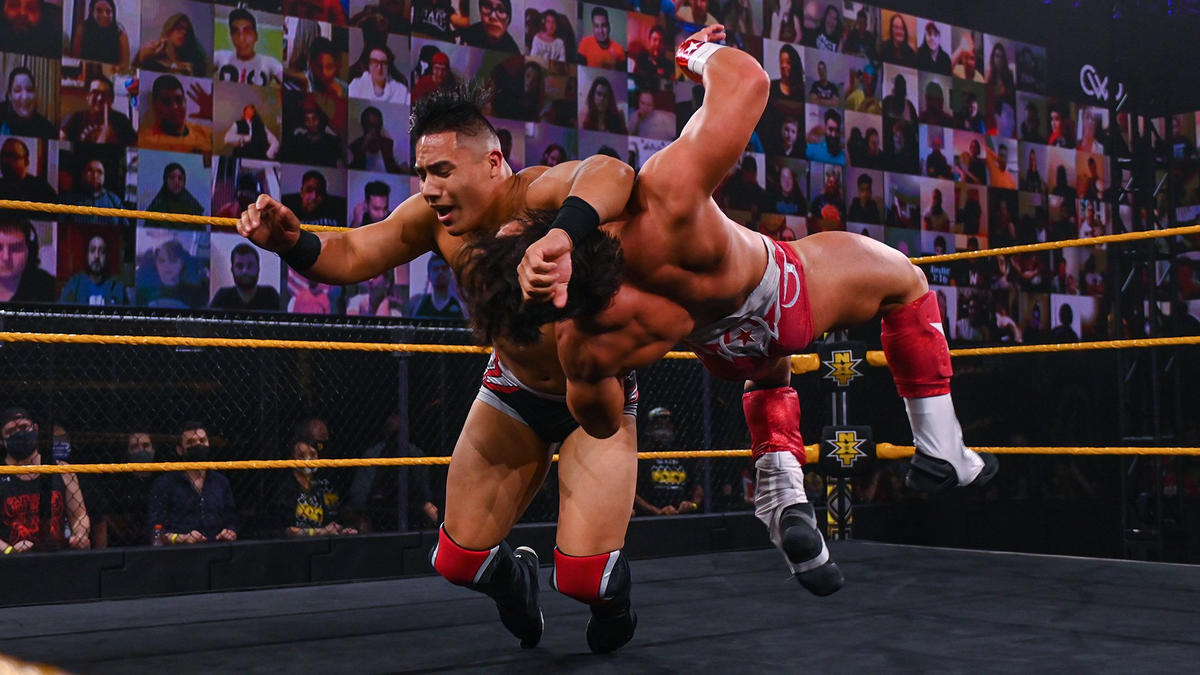 Jake Atlas has been making a name for himself on NXT and 205 Live, primarily by displaying enough boyish charm to make a ’90s group run for the hills. He took on Tony Nese again in the main event Friday night, and though we’ve definitely seen this match pretty recently, it was fun to run it again.

Nese used his power early on, hitting Atlas with a couple of suplexes. Jake was forced to suffer through some ab pointing before Nese hit the springboard moonsault, but the newcomer kicked out. Atlas tried to come back with the cartwheel DDT, but Nese blocked it by knocking him off the top rope. They fought to the outside and Tony went for a chair, distracting the ref as Ariya Daivari ran in for the cheap shot on Atlas and knocked him into the post. Nese landed the 450, but Atlas still got his foot on the ropes, shocking the heels to their very core. Atlas blocked the Running Nese and hit his DDT to get the win for nice young men everywhere.

205’s devotion to building new stars has been refreshing, but it’s clear just how much the division has lost it’s “OGs” when Nese and Daivari are the only ones left to put over the new guys.