Bayley has quietly been one of the leaders of the ThunderDome Era; whether she was reigning as champ or cackling maniacally, she made everybody look good while rocking some excellent pairs of black skinny jeans. It’s a shame that an injury takes her out of action just before WWE returns to the road. The final ThunderDome show may have been Bayley-less, but WWE still paid tribute to everyone’s favorite virtual arena with dizzying camera cuts, stilted promos, and a lot of piped in crowd noise. Gosh, I’m gonna miss it. 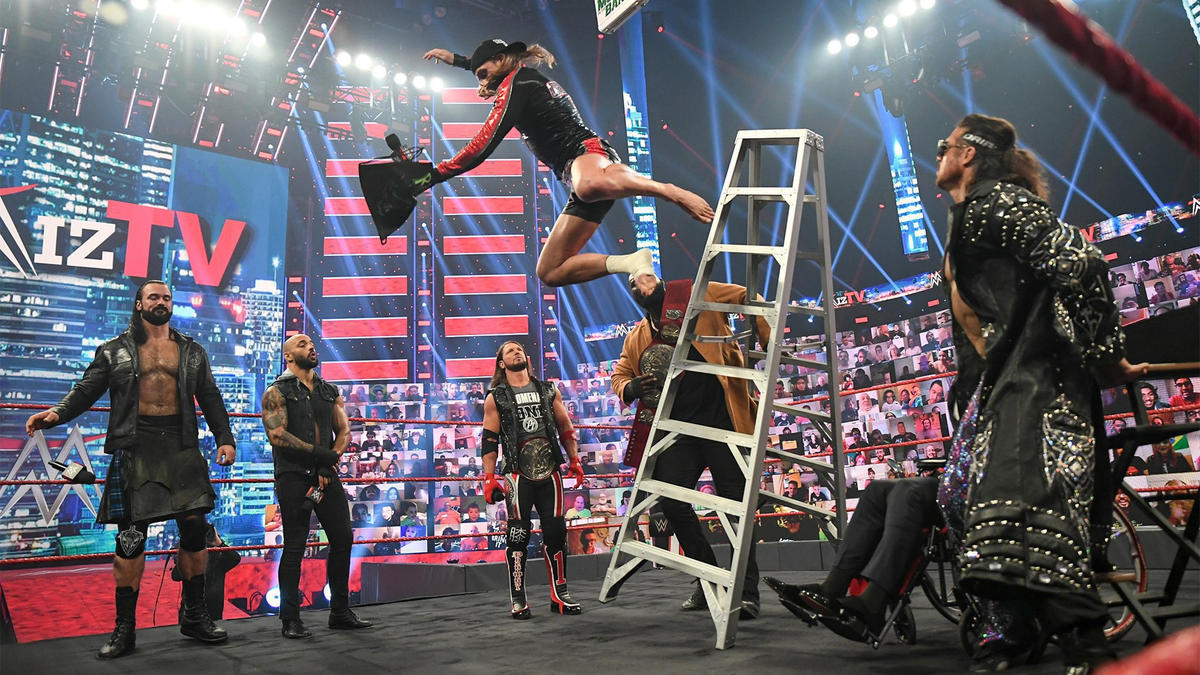 A Mediocre Amount of Beef in the Ring

The messiest man in WWE, the Miz, hosted all 5 men’s ladder match competitors on MizTV to open Raw. Naturally, he introduced the “moist wanted” John Morrison first, who was rocking Drip Drip sunglasses and the greatest 80’s hairstyle since shatever Stranger Things did to Dacre Montgomery. Next came Drew McIntyre, who alleged he was related to Davy Crockett and couldn’t wait to die in Texas, Ricochet, and Riddle. Riddle dedicated his performance to Orton, who, along with the rest of us, presumably wishes Riddle would never speak to him again. AJ Styles and Omos joined the party, complaining that Riddle cost him his opportunity last week. Omos spoke for the people and tipped Riddle off the ladder, before Styles landed a shot right to Riddle’s injured ankle. Morrison jumped Ricochet from behind, and things broke down while Drew just kind of stood there, looking like he’d rather be anywhere else. Ricochet broke the drip stick to end the segment, and a very distraught Miz tried to wheel himself out of harm’s way.

I love Miz and Morrison together; they’re both so committed to whatever they’re given that they almost always make it work. I’m not crazy about any of the other ladder participants, but at least we got to see Omos knock over a ladder like he was swatting at a fly. There were maybe two fingers on that push. The man is just buff. 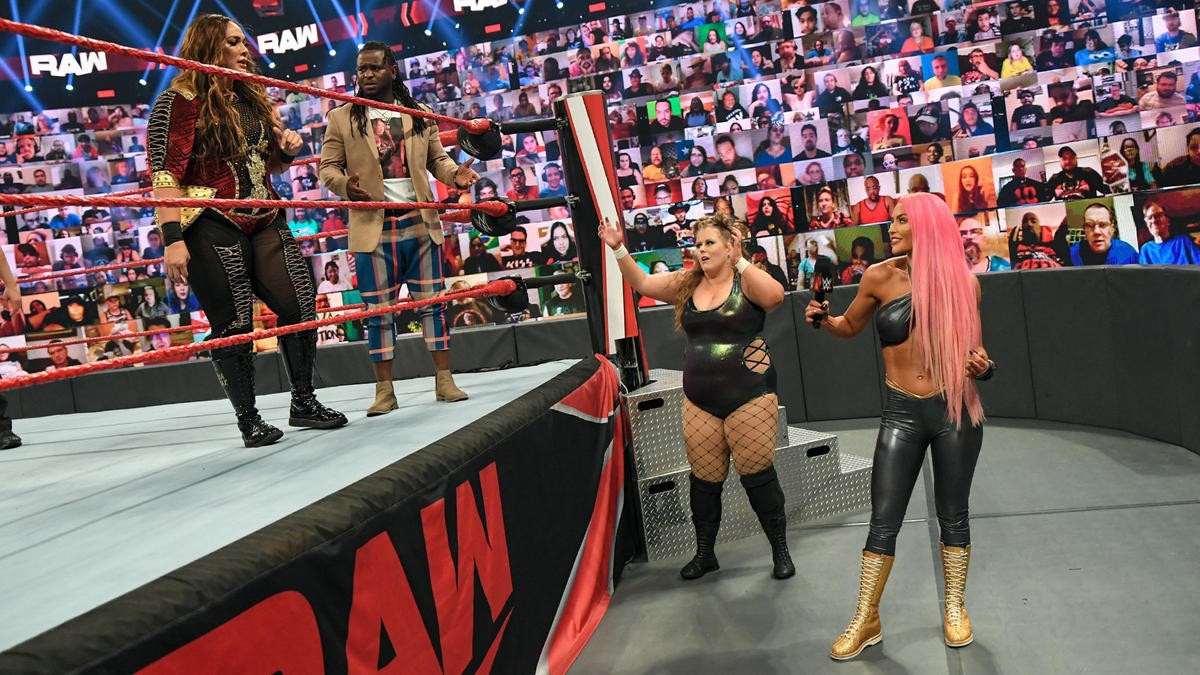 Everything But a Decent Storyline

WWE relied on a tried and true method to very slowly advance the few women’s division storylines they have going: a multi women tag match. Nikki Cross/ASH, Alexa Bliss, Asuka, and Naomi teamed to take on Shayna Baszler, Nia Jax, Eva Marie, and Doudrop. It seems like Cross is having fun with her new gimmick, so I’m glad someone is enjoying themselves here. Doudrop seemed to start things off, but Marie tagged herself in against Naomi. She got a single shot to Naomi and brought Doudrop in again, but Naomi took her out. The faces cleared all three heels but missed Eva, who turned around to suffer a deadly scream from Alexa. This was so frightening that Eva launched herself from the ring and landed on the outside. Jax and Doudrop crushed Asuka, and still the Empress kicked out to receive some more punches from Baszler. Asuka got Shayna in the arm bar, but the Queen of Spades reversed into her own submission. For a second, I imagined a just world where we got Baszler and Asuka in a legitimate match on Raw. This is the worst timeline. Doudrop broke up a pin and hit Naomi with a cannonball, but a blind tag from Jax lead to a Samoan Drop on Nikki to win the match. Eva announced herself as the winner once again, and the heels were just a little peeved.

I’m just so tired of seeing the same stuff week after week, with no idea of where the Bliss story is going or what kind of payoff there could be. The superhero gimmick for Cross could take off, and she’s certainly determined to do her best with it, but it can’t work if she’s constantly bogged down by whatever spooky stuff Bliss is pulling that week. Baszler and Jax have long overstayed their welcome as a team, and I even don’t want to get into how frustrating it is to watch competitors like Naomi and Asuka shoved into multi man matches for two minutes of action instead of getting real time in genuine feuds. 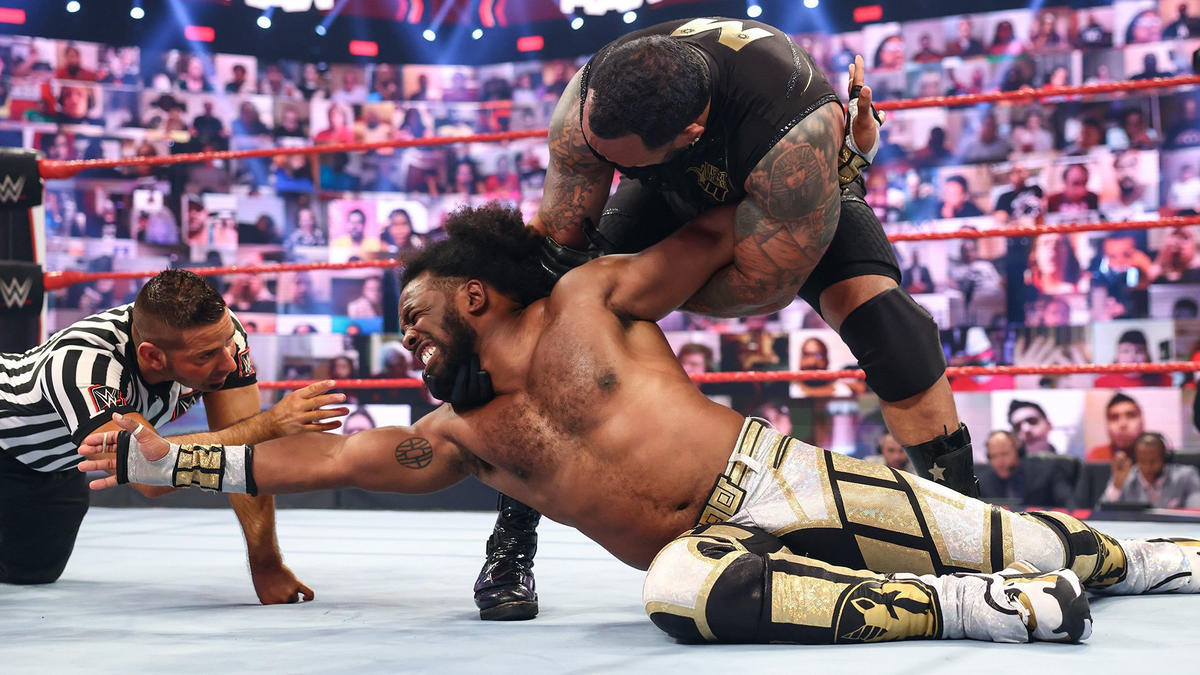 After taking it to a man with a cane last week, Kofi Kingston and Xavier Woods faced both Lashley and MVP in the main event. MVP and Woods were up first, with the manager extraordinaire managing to take control of Woods. I can’t remember the last time we saw MVP compete outside of taking multiple Claymores to the face, so props to him. Woods hit a chop block to the knee and brought in Kingston, who came off the turnbuckle with a stomp. MVP fought back and tagged Lashley to lay into Kingston, but Kofi wouldn’t go down easily. He hit MVP with a dropkick and The New Day went for a beautiful unicorn stampede. A trust fall from Kingston wiped out Lashley on the outside, and Woods celebrated with an excited jog around the ring. The champ came back with a huge suplex to Xavier, allowing MVP to smack him around. Kingston got a hog tag and cleared house, knocking Lashley off the apron. A distraction from Lashley let MVP land a huge clothesline and spinebuster, but Woods broke up the pin. Kofi hit Trouble in Paradise on Lashley, followed by Woods landing a crossbody outside the ring. Kingston evaded Playmaker and delivered another Trouble in a Paradise to MVP to score the win. It’s great to see this build for Kingston, and I have no doubt that he and Lashley will put on a banger one-on-one. It seems unlikely we’ll see a new champ next Sunday, but we can at least enjoy the ride. 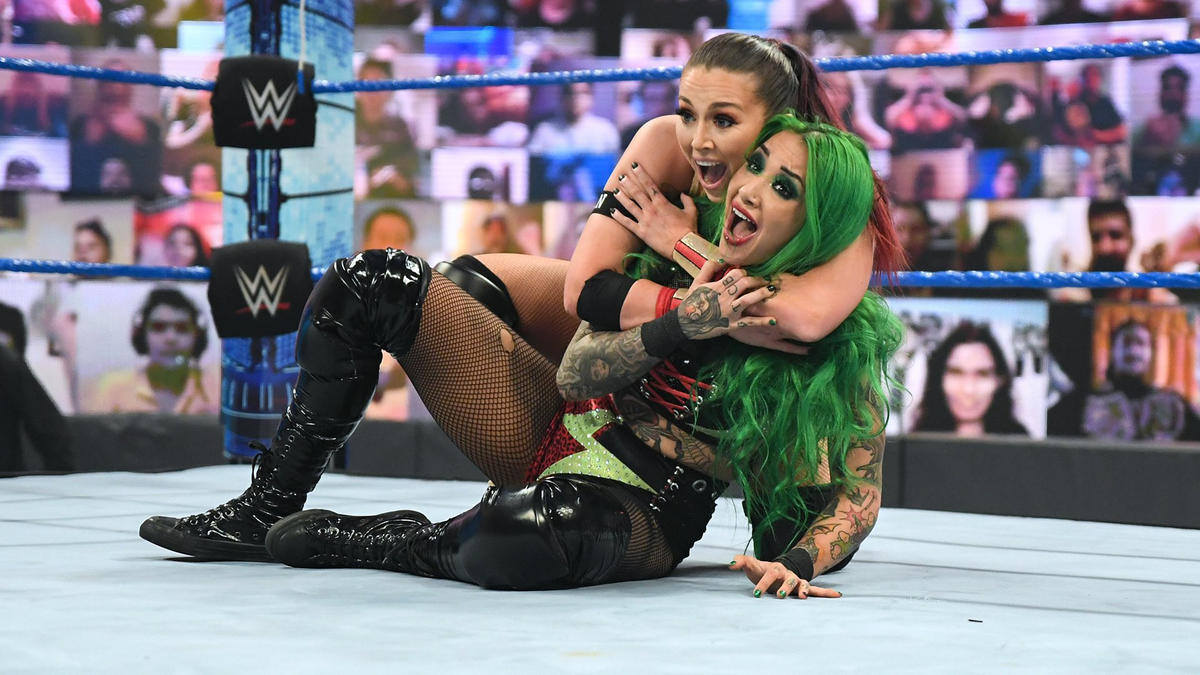 Tamina and Natalya came out to the ring to cut a vague promo about a new tag team arriving on SmackDown. Said team was then revealed to be Shotzi Blackheart and Teagan Nox, who were referred to simply by their first and last names, respectively. Shotzi was recently an NXT tag team champ with Ember Moon, but Moon wasn’t mentioned once here, so I guess those days are gone. After some early doubleteam offense from Shotzi and Nox, Tamina came in to lay Blackheart out. The champs landed a double clothesline on Shotzi, but Teagan broke things up. A cannonball from Nox in the corner and a senton from Shotzi scored the win over Natalya.

This was… Something. I’m still confused over how Nattie and Tamina are heels again. Throwing in two random NXT call ups feels like someone looked at the women’s tag teams and realized there just wasn’t much going on, but instead of bringing up the already established team of Moon and Blackheart, they gave the returning Teagan Nox double duty to make up for lost time. There’s a lot of questionable things going on here. Time will tell if Shotzi and Nox will be permanent SmackDown features, or if this was a one-time schtick. Either way, I wouldn’t be surprised to see the women’s tag titles change hands yet again in the coming weeks. 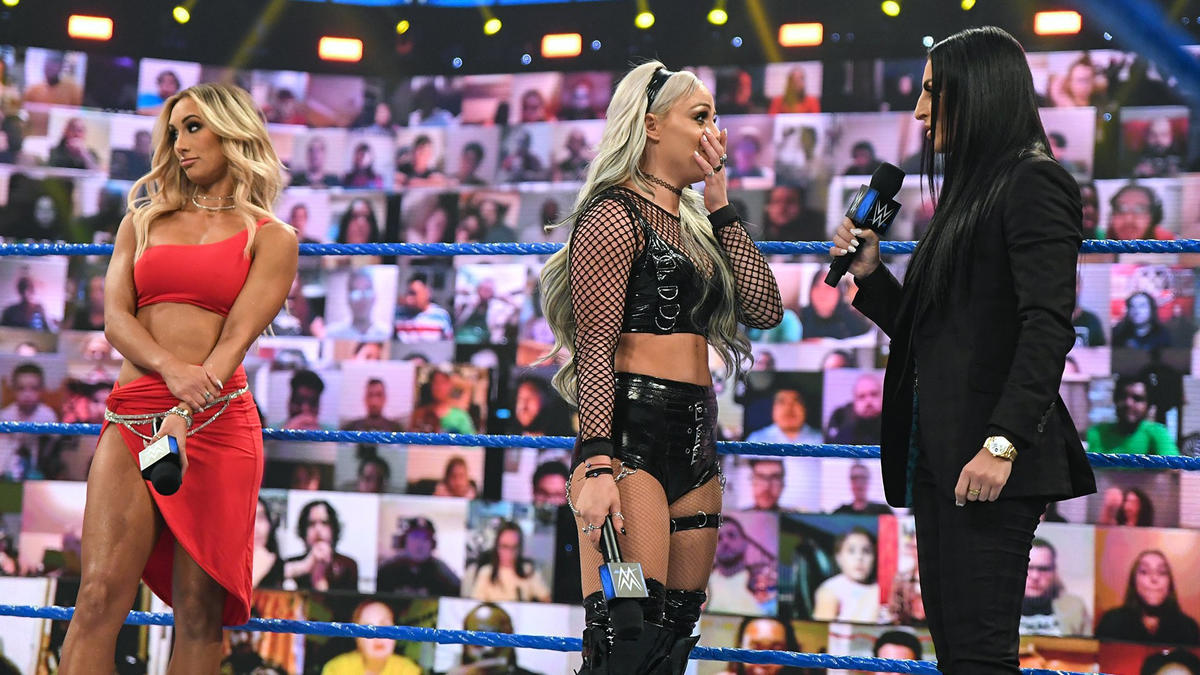 One Woman’s Muscle Tear is Another Woman’s Title Match

Bayley announced a leg injury on Friday afternoon, which unfortunately keeps her out of the Money in the Bank match. Sonya Deville came out to announce a replacement to challenge Belair, and it was the most beautiful woman in WWE, Carmella. But wait, there’s more! The match will now happen next Friday in front of real live studio audience! Liv Morgan had a bone to pick about hot women getting opportunities, so she came down to the ring to rant about how she’d beaten Carmella like 4 times in the past week. A very overworked Sonya told her that with Carmella getting a title match, her spot was open for the ladder match, and Liv was invited to fill it. Morgan got teary eyed and excited, and Belair came out to remind everybody just who they were dealing with. She offered some insults to Bayley before admitting she admired Carmella’s in-ring skills, but little else about her. Liv and Belair stared off on the ramp before Morgan pointed at the briefcase menacingly.

With Bayley’s injury, there wasn’t much else they could really do here. Giving the first audience in 16 months a title match before MitB is exciting enough, even if it just became more obvious that Belair is retaining. She and Carmella should have a fun enough match, while Morgan is another solid addition in the ladder match. She’s one of the women who could benefit most from that metal baggage. And it would match all those chains. 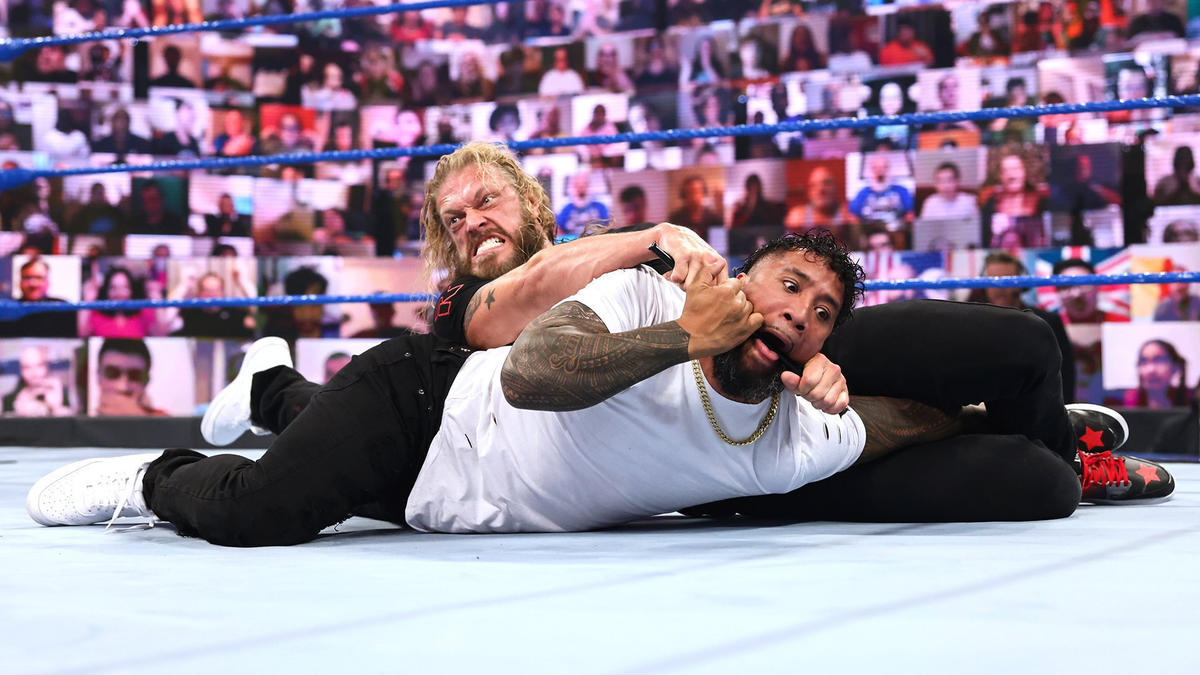 The Family That Eats Chairs Together

Every week when I tune into SmackDown, I rub my little hands together in excitement of what messed up stuff Roman Reigns is gonna put his family through this time. It’s just nice to know that whatever beef I have with my relatives, I’ve never choked out my cousin on live television. The show started with Jimmy being barred from Reigns’ room by Paul Heyman, who promised Roman would give his cousin his “full attention” later on. This moderate threat turned out to be a somewhat lovely family reunion between Reigns and both Usos. Unlike most of my reunions, this involved limited screaming, but plenty of intense soft monologue by from Reigns. They ended with a three way hug to prove their loyalty and mental degradation to each other.

Unfortunately, even the power of family couldn’t keep Edge from being the thorn in the Tribal Chief’s side. He called out Roman to meet him face to face in the ring- without any Heyman or Uso interference. Roman tried to tell Jimmy and Jey to stay out of it and came out solo. The boys showed up anyway as Roman was locking eyes with Edge, and Reigns again told them to please leave him alone for like 5 minutes. Edge and Roman slugged it out in the ring, Edge getting the upper hand as the Mysterio’s music hit. Rey and Dom cleared out the Uso’s with chair shots as Edge laid into the champ like he was the History Channel cancelling Vikings. Jimmy suffered a 619 from Dominik, while Jey ate a spear. Roman escaped up the ramp and watched Jey suffered the same chair crossface as the rest of his family. That’s what you get for being a good cousin! I can’t wait to see Edge and Reigns at MitB; Edge feels like he has the most momentum of anyone who’s stepped up to Roman. The Uso’s have perfected their parts here, and throwing in the Mysterio’s to fuck around and find out is just a cherry on top. 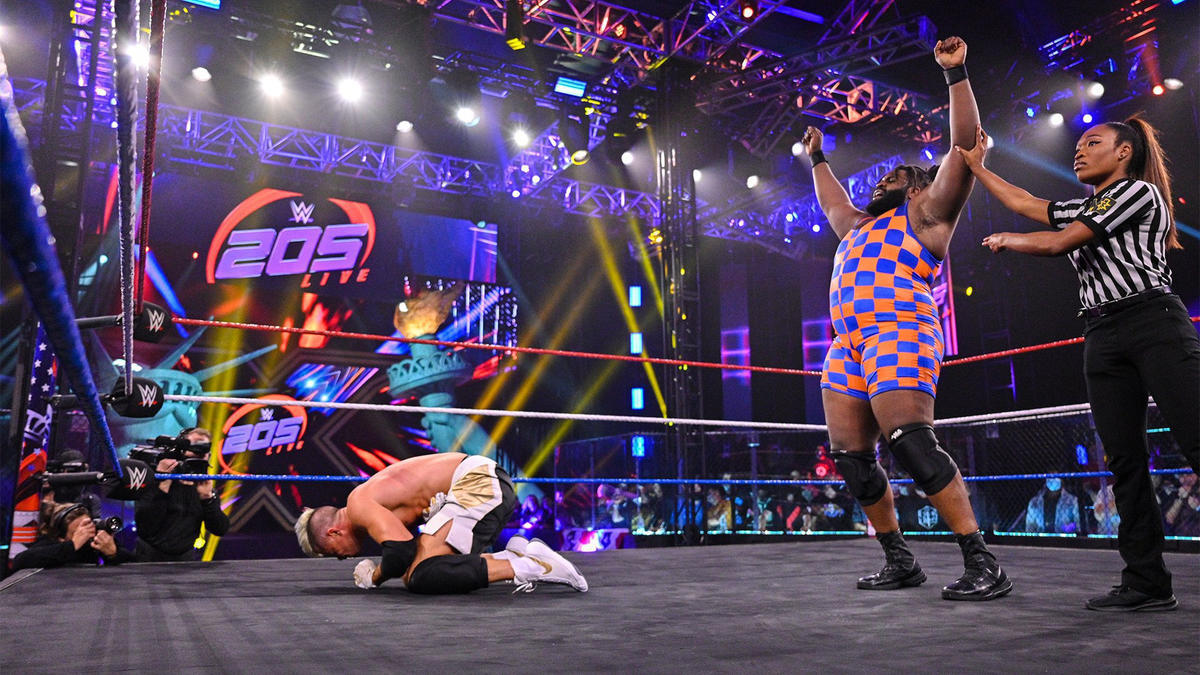 205 Live is kind of an NXT Lite placeholder right now, playing host to the Breakout Tournament and a bunch of dudes who definitely aren’t close to 205 pounds. The first match was Josh Briggs vs Asher Hale; Hale has been on 205 a few times now, but this is Briggs’ WWE debut. He was the final Evolve champion, he’s billed at 6’8″, and he was accused during Speaking Out last summer, so you already know who’s going to win this match. Hale got some momentum chopping Briggs down with an enziguri, but a clothesline off the ropes took him down for the count. Our second bout was Grayson Waller vs Odyssey Jones, who was 400+ pounds and rocking an incredible checked singlet. Waller tried his darnedest, but couldn’t quite measure up to the big man. He suffered several splashes but still came back with a DDT, only to fall victim to a powerslam that sent Jones to the next round. Nothing like seeing cruiserweight’s demolished on the cruiserweight show.