The Showcase of the Immortals! The Grandaddy of Them All! The Show of Shows! And it's coming pre-taped from a gym in Orlando!

While it feels like the last few weeks have mentally been about two decades, we’ve finally WrestleMania week, and everybody’s getting in the holiday spirit. While we’re unfortunately unable to sit in a dive bar and drink lukewarm beer just feet away from Colt Cabana, we can all take comfort in knowing it’s super safe for a lot of personal contact to be happening right now. 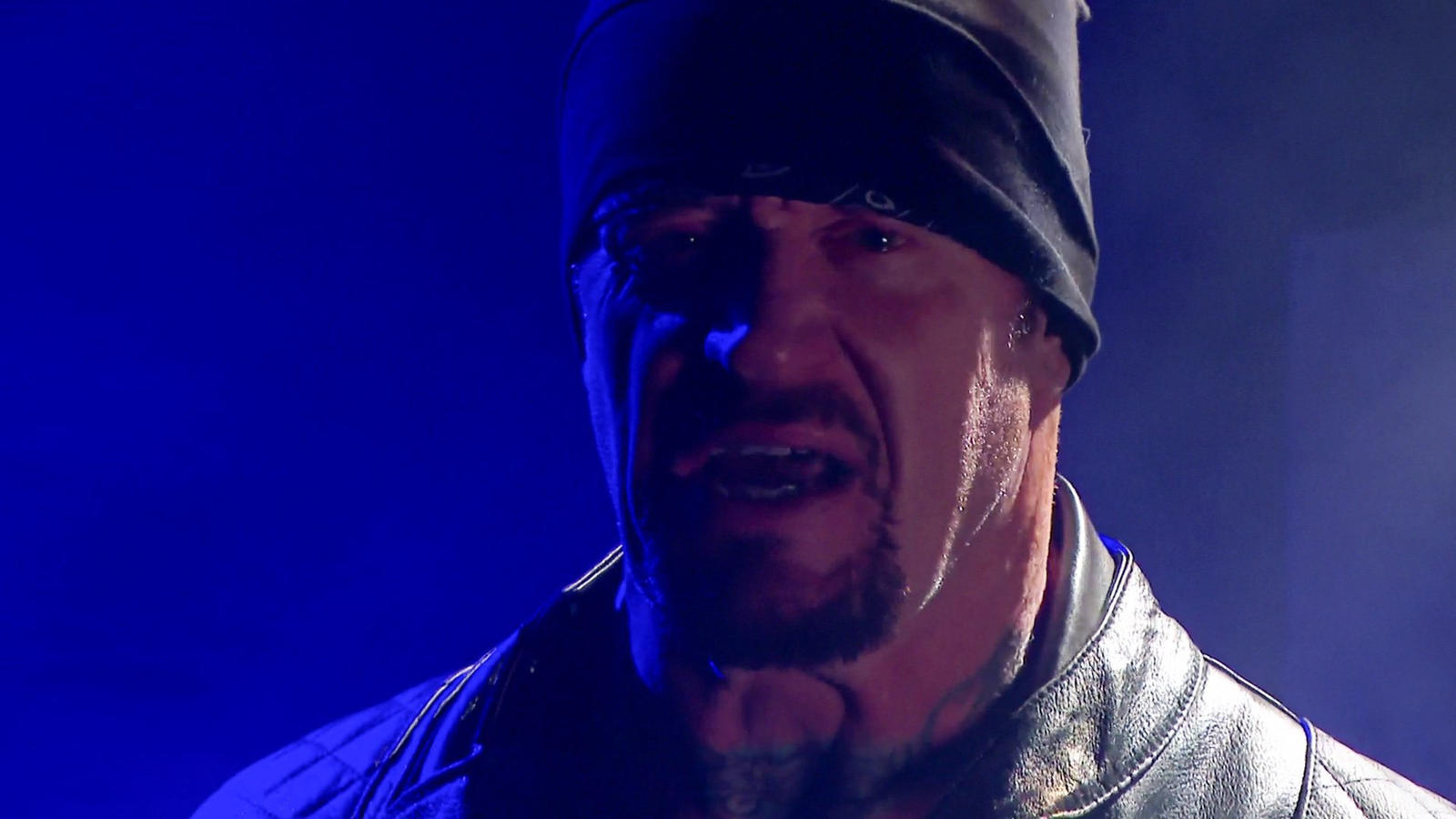 Raw opened on Monday with a package covering all the wife insults so far in the Styles-Undertaker feud. We then saw Taker cut a promo, but instead of thah sweet leather duster, he wore a biker jacket and like three bandanas. The reborn American Badass attempted to say “Allen” as threateningly as any man can, and defended his wife’s honor by reminding everyone that McCool does a better Styles Clash. A real part of a feud in 2020 is AJ Styles stealing Michelle McCool’s moveset. Finally, justice is served. Taker accepted Styles challenge for a boneyard match, which is still undefined but hopefully includes a lot of oversized gravestones, like the one Taker apparently hand carved with Styles’ name on it. The build for this match over the past few weeks has gotten more interesting, but I’m mostly excited about the prospect of a lot of Party City skeletons getting some airtime in this one. I hope set design just goes hog wild. If we’re not getting a rollercoaster on stage, I deserve some 90s gothic horror aesthetic. 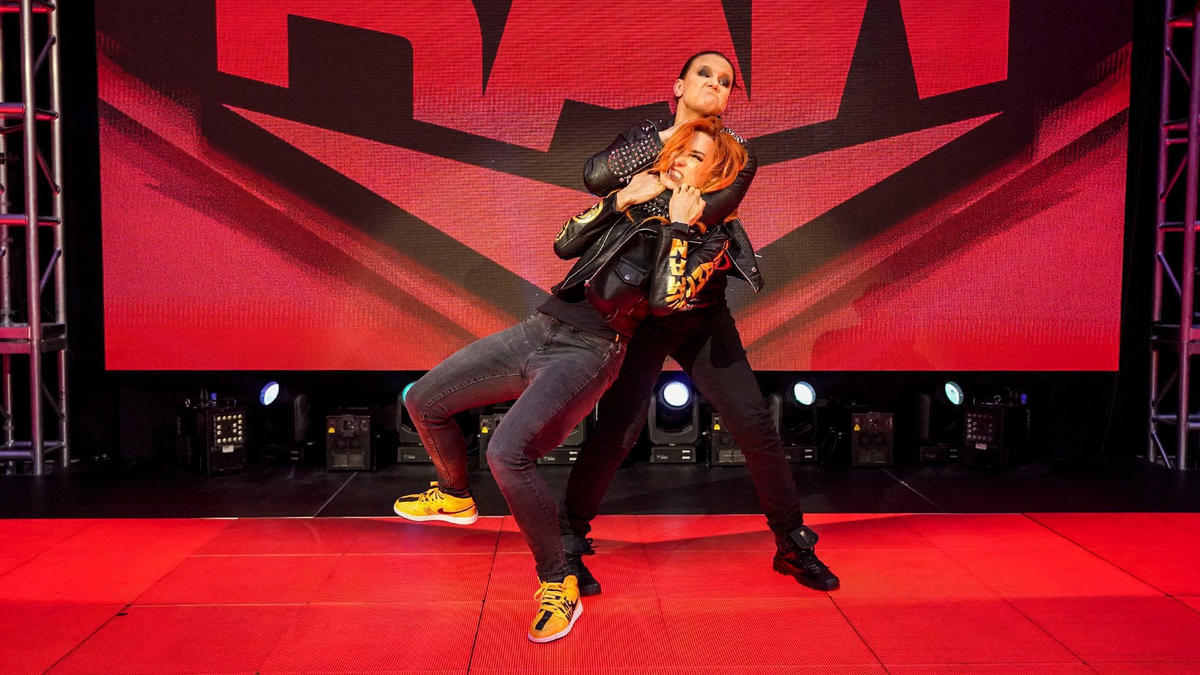 With the new format of shows, WWE has heavily relied on replaying past matches as part of the build for this year’s mania. I certainly don’t blame them, because it’s nice to watch a match and not worry one of the participants might contract a deadly disease while bumping for your viewing pleasure. Raw showed us last years Mania main event, the triple threat between Charlotte, Becky, and Rhonda Rousey. I wasn’t super high on this match when it happened, and a year later after Lynch has had much better matches as champ, it falls a little flat. After we’d relived the glory days of figuring out how shoulders work, Becky started to give a promo on Shayna and Rhonda’s history, but was cut off by an attack from Baszler. Shayna locked in the Kirifuda Clutch and rag-dolled The Man across the stage, standing tall over Becky to end the segment. This may be the feud that WWE has managed to develop the best within the new restrictions for shows, and one of the matches I’m most looking forward to this weekend. 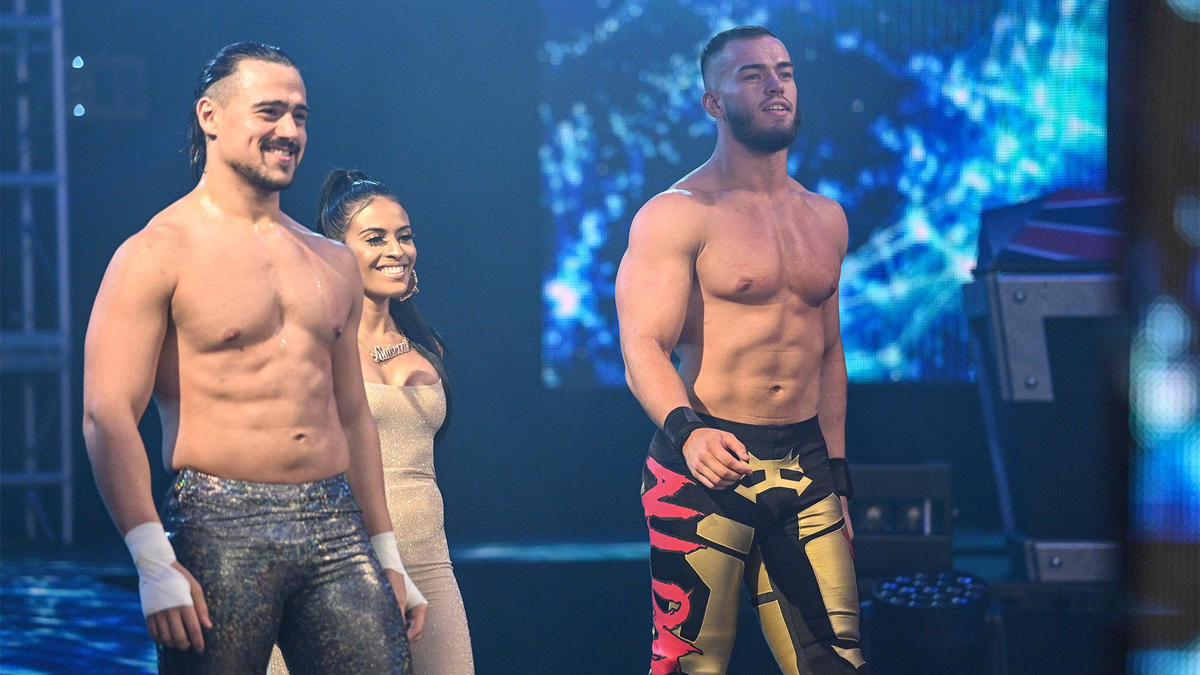 Like the rest of us, WWE has nothing but time on their hands, yet still truncated two feuds into this six man tag so we could watch Aleister Black squash another rando. Seth Rollins joined Angel Garza and Austin Theory to face Kevin Owens and the Street Profits, ahead of their respective Mania matches. Rollins, Garza, and Theory weirdly work well as a team, although all that snottiness and hair gel in one ring is really a lot to contend with. I’d be down to see Garza and Theory join Murphy and AOP as disciples of Rollins cult magic. Hopefully Theory can teach Rollins the true meaning of social media- it’s for showing off pictures of your muscles with unrelated inspirational captions.

This was a solid match, including a bonkers bump from Montez Ford for the incredible crowd of no one. Owens hit a stunner on Garza for the win, but Rollins immediately landed the Stomp to wipe him out. Owens even went so far as to call Rollins a dip shit, which is when you know things are really getting serious. Owens/Rollins should be a good match that hopefully still carries intensity even without the crowd behind them. 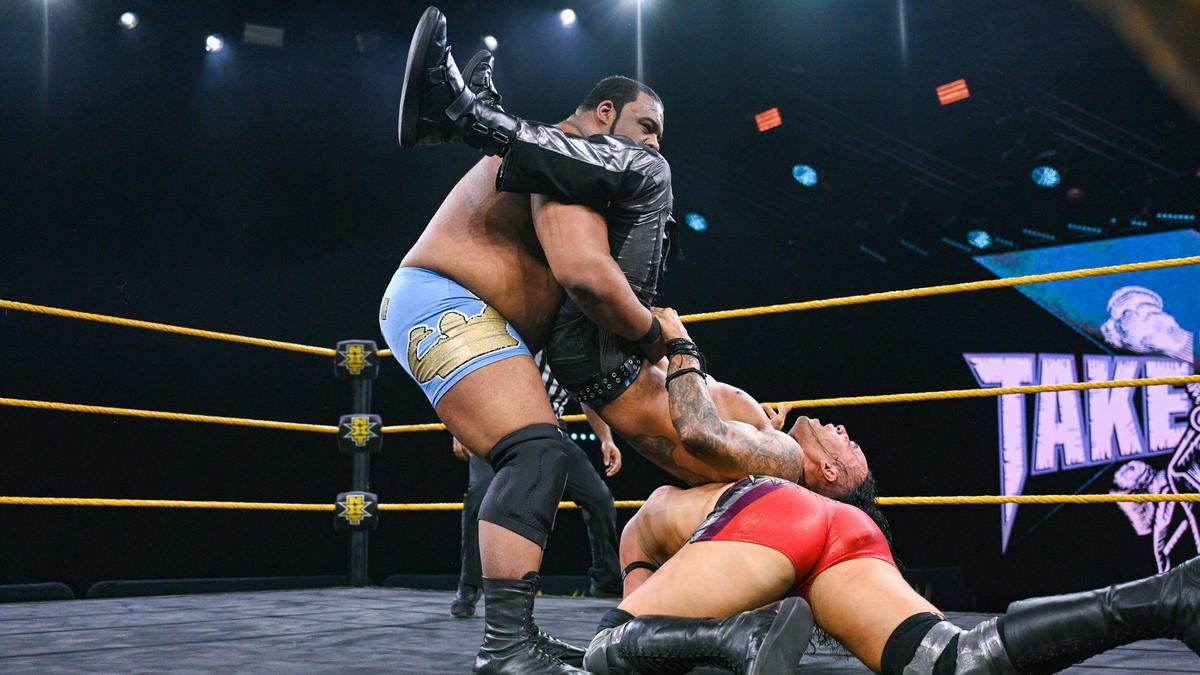 With the cancellation of TakeOver this weekend, NXT TV will be putting on most of the matches we would have seen the night before WrestleMania. Although not officially announced, this most likely would have been one of them, with Keith Lee defending the North American title against longtime rival Dominic Dijakovic and Damien Priest. I don’t really get ‘Archer of Infamy’ as a gimmick, but if you ignore the fact that words have meaning, Priest especially put on a good show here. He held his own against Lee and Dijakovic, who have proved many times in the past they can always perform well together. This was an overall really fun main event that almost made me forget they were wrestling in a Planet Fitness gym in front of nobody. Almost. 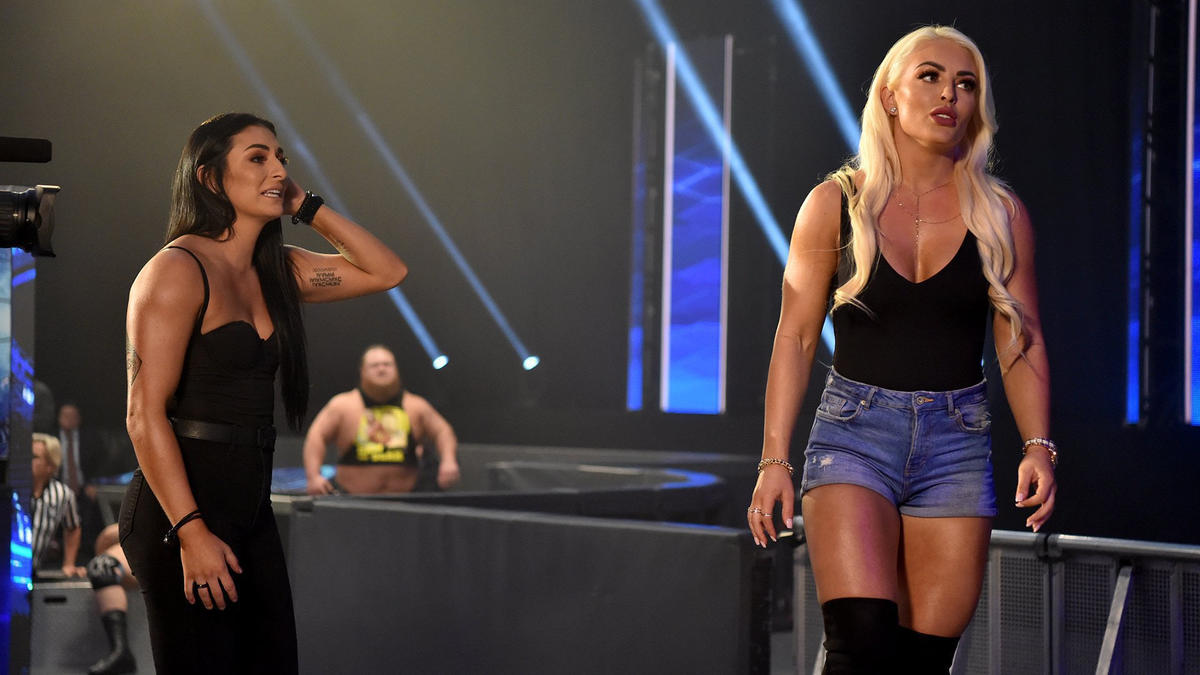 Very saddened to report that friendship, as always in wrestling, is dead. This week on SmackDown, an anonymous new hacker revealed the truth behind Otis standing up Mandy on their Valentine’s date through very clear and well edited surveillance footage. While Tucker had a match with Dolph Ziggler, Otis got some important texts and disappeared, only to come back with the stone cold receipts from his omniscient new friend. Footage of Sonya sending Otis a text from Mandy’s phone telling him she’d be there at a later time, before deleting the messages and telling Dolph to go crush it. Otis went ballistic, but Ziggler was able to escape backstage, which means we’re gonna see some very angry 90s dance moves this weekend. The romantic vigilante hacker is most likely Mustafa Ali, as we’ve been seeing his ring light image show up as technical interference on SmackDown for a few weeks now. Don’t know how I feel about Ali’s evolution into digital karma character, but hey, at least he’d be on TV, so I really shouldn’t be picky. 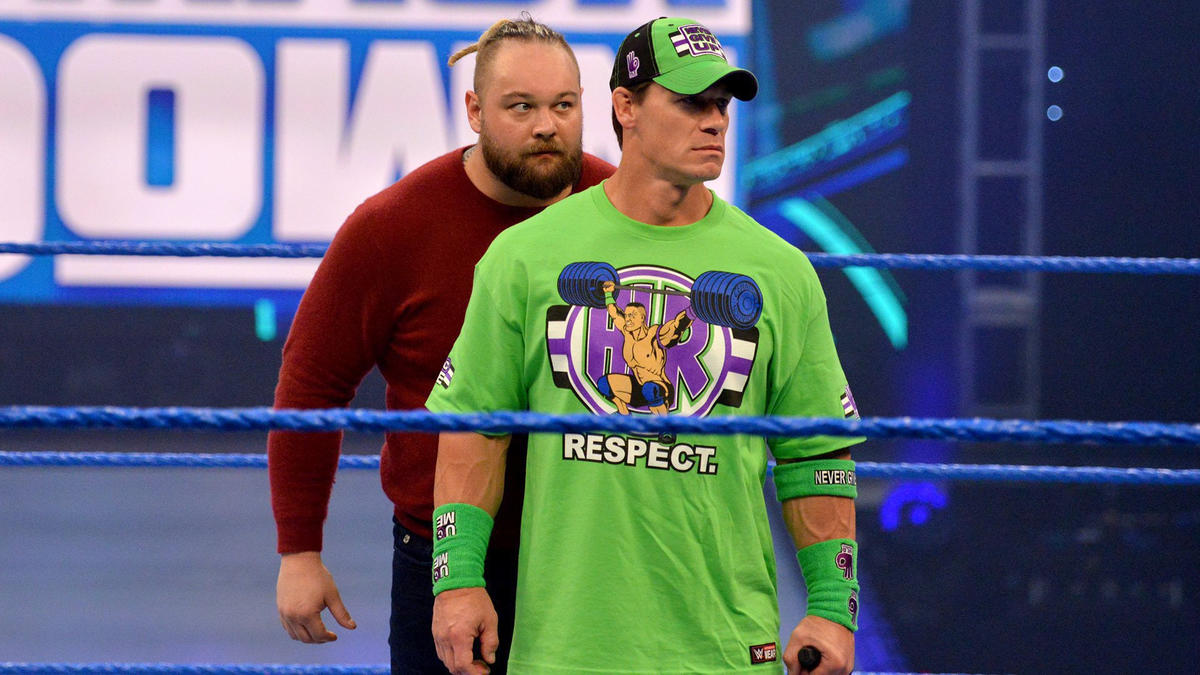 Hustle, Loyalty, and a Murderous Clown

After drinking Ramblin Rabbit’s blood to receive the strength of all the puppets who came before him, Wyatt is fully prepared for his Firefly Funhouse Match this weekend. John Cena, who has no furry friends to consume, admitted his own uncertainty about the match, but only after he spent a bit congratulating WWE on running Mania despite the whole pandemic no touching thing happening. Cena swore to “finish what he started” by taking out Wyatt in the Funhouse match. He was then surrounded by all the Funhouse friends, who promised Cena that he would play with them forever. The Fiend then showed up in the balcony, having a nice colored contacts staredown with Cena before Wyatt appeared directly behind him. A match like whatever the Funhouse ends up being will no doubt benefit more than any other from being pre-taped; I imagine most of the Fiends best hijinks are fixed in post.

In a blink and you’ll miss it backdoor announcement, WWE casually changed one of the bigger matches on the card by way of an updated graphic. As the internet has been saying since Reigns announced he couldn’t compete, Braun Strowman is stepping in to the Universal Championship match against Goldberg, in a bout that might take the record for least number of moves used. I understand the appeal of both Goldberg and Strowman, and while I’m not opposed to giant meaty men staring at each other and huffing intensely, this might be my personal snack break. On the upside, the odds that it goes longer than 4 minutes are very low. 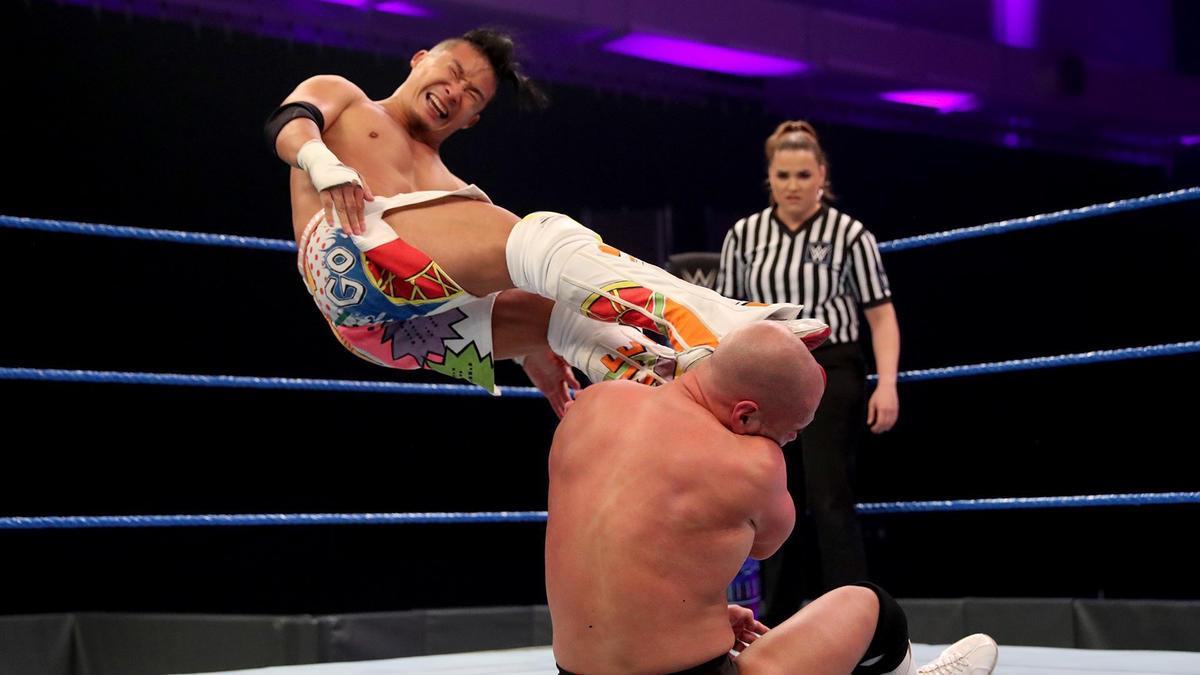 Everybody’s favorite time traveler seems to be an official part of 205 Live now, which makes me very happy. Kushida seems a bit lost in the shuffle on NXT, having put on some great matches during his time with the company despite never making it past the lower mid card of the yellow brand. 205 gives him more opportunities to perform and to show off that keen fashion sense. Name another wrestler who could convincingly pull off an orange vest. Last night he faced Danny Burch in an interesting mix of styles; Burch does well against high flyers with his gritty technique. It’s good to see him get some singles matches in on 205 as well, as he’s most known for teaming with Oney Lorcan on NXT. Kushida ultimately got the win with an arm bar, which could mean absolutely nothing with the cruiserweight title still stuck across the pond with Jordan Devlin.

Cody Rhodes Walking Away From a Sledgehammer Shot to the Head: A Review

In Wrestling, Endings Don’t Get Better Than MJF vs. Wardlow