For the first time in ages, I watched every WWE show as it was airing this week. I’m not super proud of this fact, but it’s really more a testament to the fact that I’ve finished season 3 of Stranger Things and rewatched every Simpson’s Treehouse of Terror, so, like- what else did I have going on? Might as well watch people have more contact with other humans in an hour than I’ve had the past 4 months. 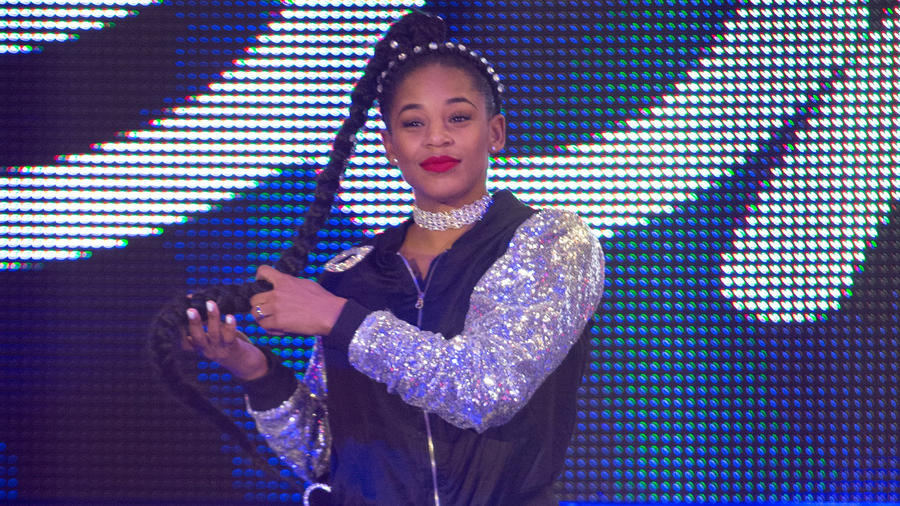 Remember the Raw after Mania, when Bianca Belair came to help the Street Profits against Angel Garza, Zelina Vega, and someone else I guess? Remember how after like two weeks Raw somehow didn’t have anything else for her to do? It’s absolutely insane to look at Bianca Belair and not come up with something to keep her on TV, but here we are. Three months of little use was baffling to anyone who saw Belair’s work in NXT, but at least they took a step in rectifying that this week, when Ruby Riott introduced Belair as her surprise tag partner against The IIconics. The match was shorter than any woman involved deserves, but ended with Belair hitting the KOD on Kay to win. With Liv Morgan temporarily out of the picture, Belair and Riott could certainly be a fun team. I’d prefer to see them each as singles acts, but honestly I’ll take whatever as long as I get to see Bianca wrestle some more. 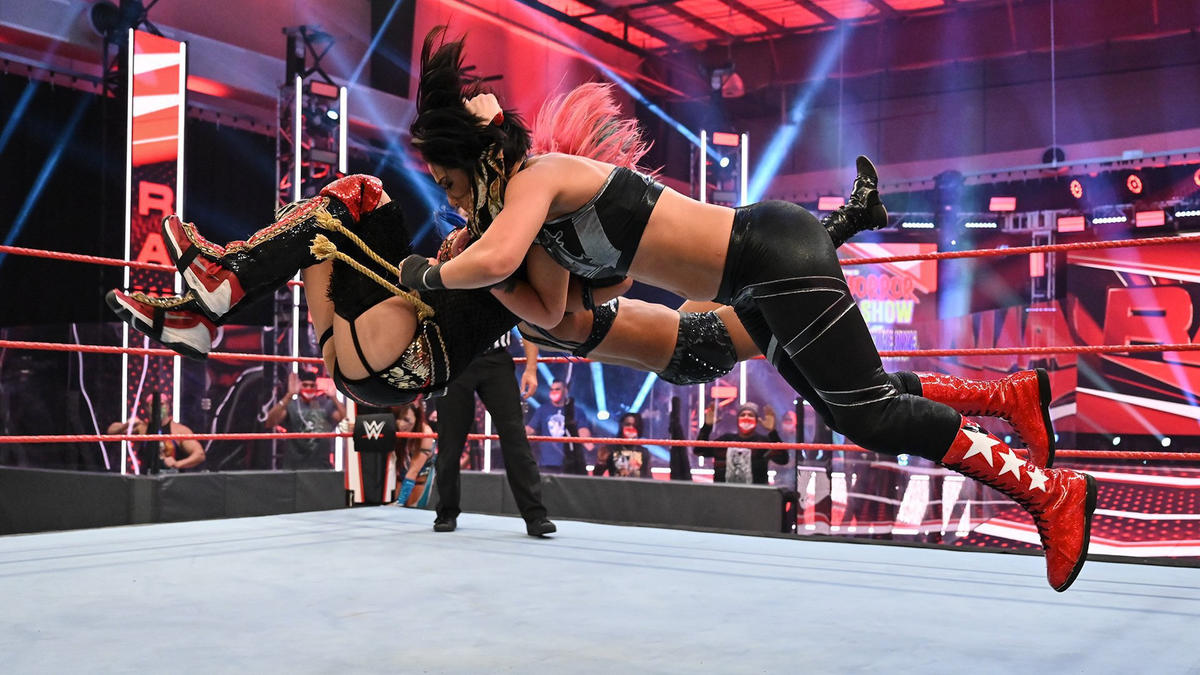 Have I mentioned how much I love Bayley and Sasha lately? Probably, but let’s go through it again. Both women are excelling in their snotty heel roles, Bayley playing the cowardly champ and Banks as the legit legit boss. Raw’s main event saw them take on the Kabuki Warriors in one of the evening’s grudge matches. We’ve seen this match in various combos over the past few months, but all four women are so good, it’s not like I get bored of watching. Sane and Asuka were in control to start out, but Sasha nailed the Empress on the apron to get back in it. She and Bayley worked a double team on Sane, but couldn’t quite get the win. Kairi managed a tag, and Asuka got the Asuka Lock on Banks. Bayley had to come in to make the save, and she and Asuka fought to the outside of the ring. Banks got the Bank Statement on Kairi, and the Golden Role Models retained their titles. Bayley might not agree, but I think that’s a banging team name, for the record. This was a nice, lengthy main event that gave both teams a lot to work with. There’s a lot of momentum for both Asuka and Sasha going into Sunday’s match. 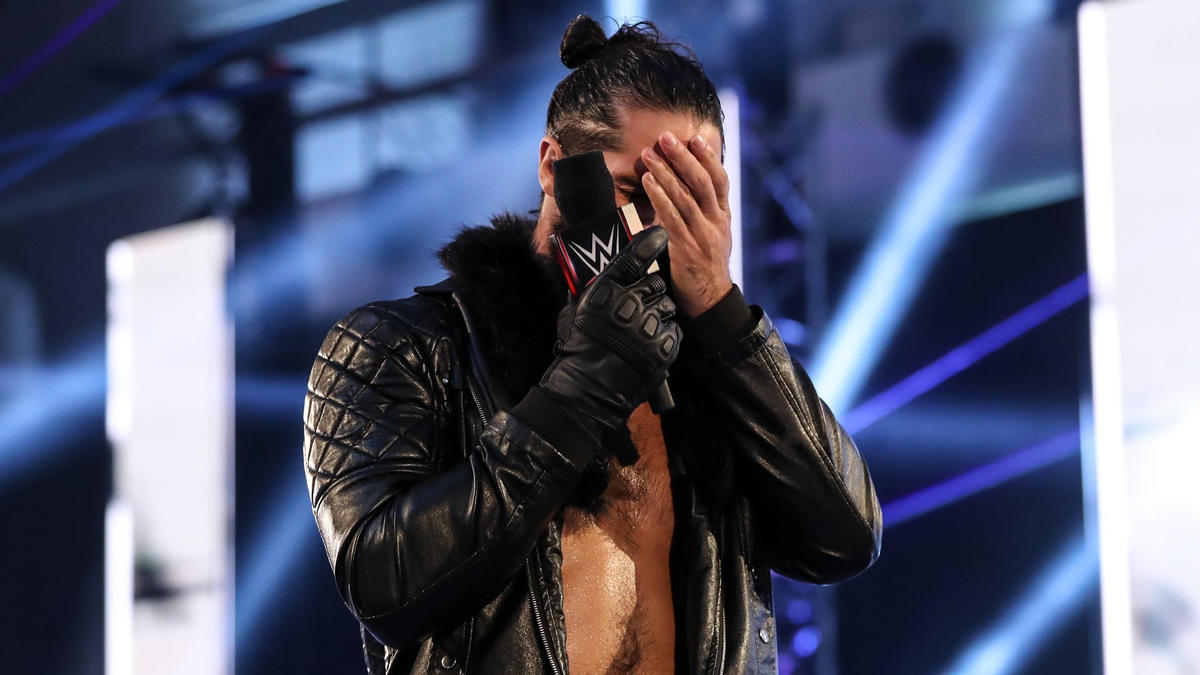 Seth Rollins was scheduled to face Kevin Owens Monday night, but first he wanted to let everybody know that he’s not above ripping another father’s eyeball out of its socket come Sunday. In full messiah mode, Rollins insisted that blinding Mysterio was for the greater good. Kevin came out to interrupt the sermon, bringing his own eye patch to an eye gouging party. Murphy tried to go after KO, so Aleister Black came to back up his friend and reignite a feud that I think about every night before I go to sleep. This gave us a brief match between Murphy and Black, where the disciple was unable to gain control and fell victim to a Black Mass. Rollins pulled Black out of the ring, causing a DQ and leading us straight into Seth vs Kevin, with surprise guests Rey Mysterio and Dominick. I know Dominick is the one who wrestles, but Rey really doesn’t want to take his other kid anywhere, huh? Rollins kept getting distracted by the Mysterio family, until he hit a suicide dive on Owens. Kevin was down for a while, but got Seth back with a huge super kick. Rollins went for the eyes, trying to start his collection early, but Rey distracted him again, leading to a stunner from Owens for the win. I better not be getting mislead here; I want to see somebody’s eyeball out of their socket once Sunday’s match is over. 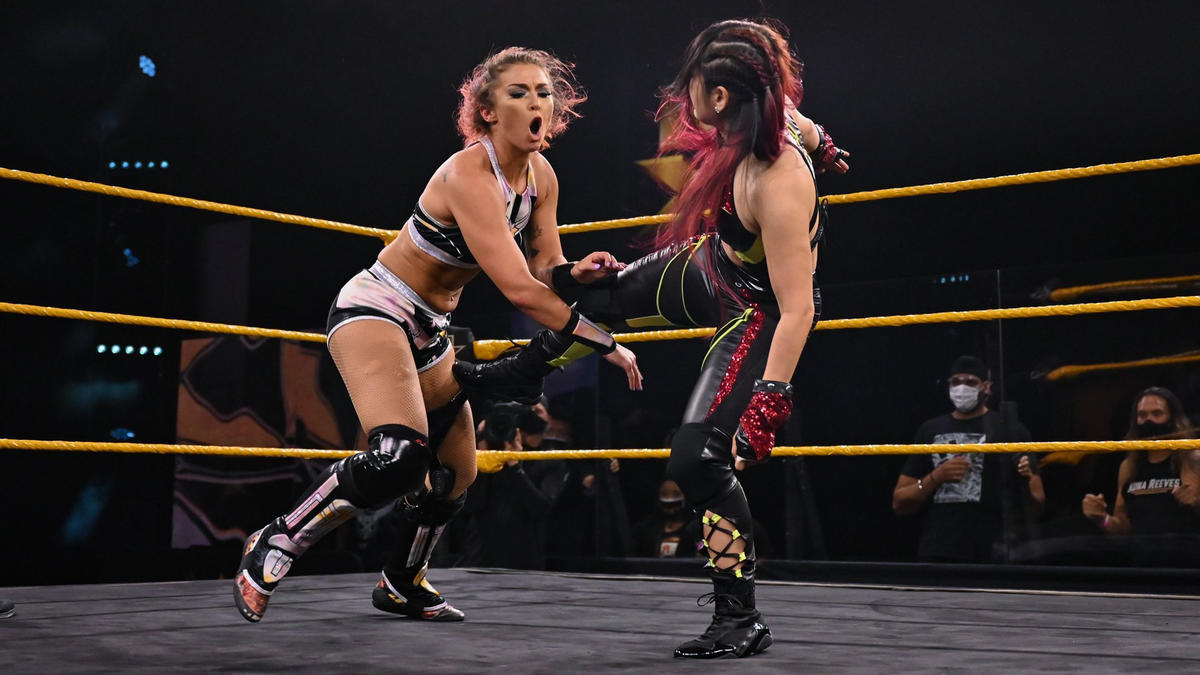 Comeback Kid Doesn’t Make it Back

Tegan Nox got her first NXT Women’s Championship opportunity this week, shortly after showing us all up on Instagram by hanging out in Harry Potter World (mask on) with her girlfriend. This was also Shirai’s first title defense, and both women really made a great showing for themselves. Shirai remains one of the best women in all of WWE (and wrestling anywhere) and Nox certainly proved herself as more than “oh no, my knee.” Io was in control for much of this, and Nox played the plucky underdog well, getting her momentum in when possible. Things briefly turned around when Nox rolled out of the way of Shirai’s double knees, causing the champ to land on the steel steps. Hard, unforgiving steel, says Mauro and George RR Martin. Nox was able to take advantage and stay on top for a while with several kicks, but she was unable to hit the Shiniest Wizard, as Shirai came back with a tough palmstrike to Tegan’s face. She went up to the top for the moonsault to retain, and Tegan’s comeback story sadly ends. Really fun match here, with the right result. 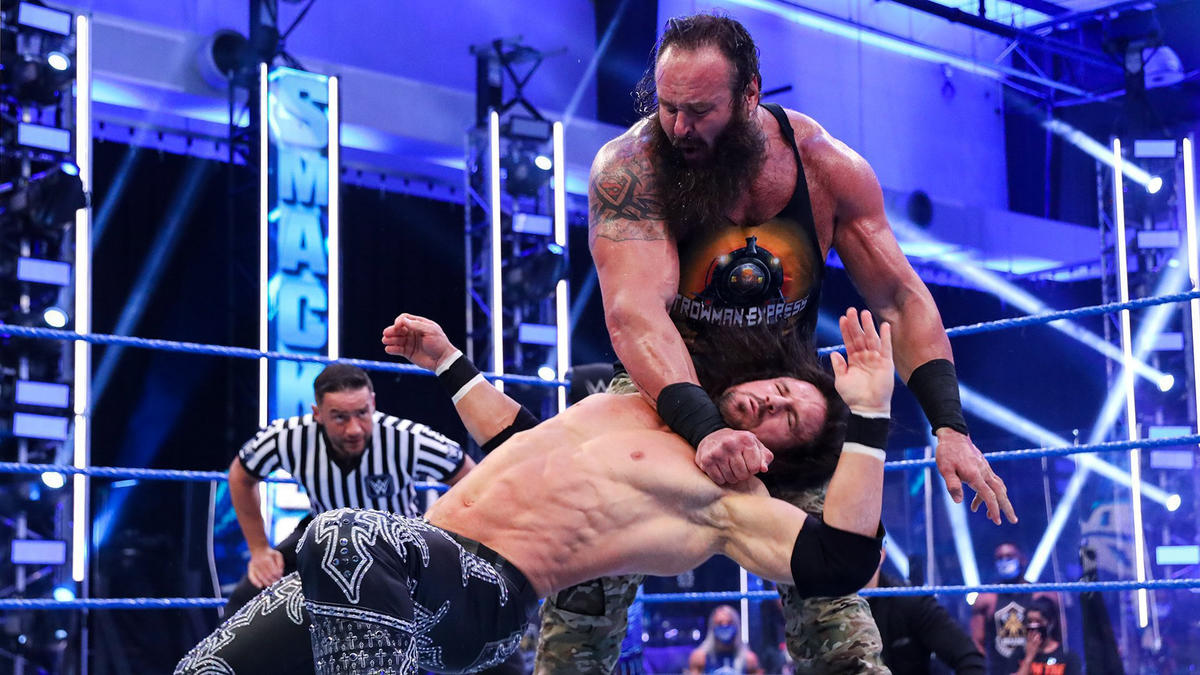 Return to the Swamp

SmackDown promised us a visit to the Firefly Fun House, but I guess Ramblin Rabbit wasn’t available, because instead we got an up close look at Bray Wyatt becoming one with the swamp. If you missed Wyatt’s 20 minute promos where he managed to say absolutely nothing at all, don’t worry, because he clearly hasn’t lost his touch. He talked about Sister Abigail, missing the mud, and his history with Strowman. Braun came out for his match and cut a promo declaring that unlike me visiting New Orleans in 2010, he was not afraid to take a swamp tour, regardless of how many alligators he saw. He then gave us a very short match with John Morrison, which saw the Universal Champ win with a powerslam, to the surprise of no one. Johnny Friday Night Delight is still champion of my heart, and the small but devoted community of people who still wear bedazzled sunglasses. 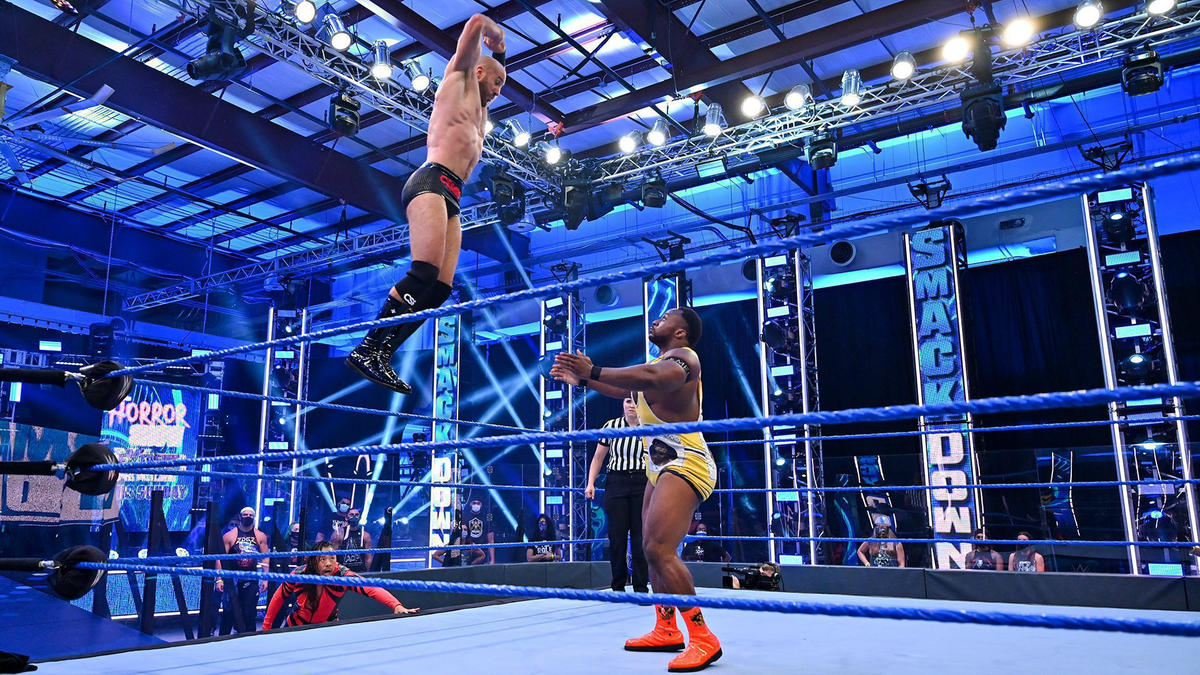 The Artist Collective and the New Day are facing off for the SmackDown tag team titles this weekend, but first we need a match with incredibly specific stakes to set the stage. Cesaro and Big E fought to determine who could pick the stipulation for the Extreme Rules match, from the very deep pool of possibilities consisting of a tables match or a steel cage match. If you’re not on the edge of your seat, I don’t know what to tell you.

Obviously this was still very good; it’s Big E and Cesaro. We got some very competitive back and forth for much of this, with both men showing off their strength. Cesaro almost got a tap out with the swing into the Sharpshooter, but Big E was fueled by the power of pancakes and friendship and just wouldn’t call it quits. With both partners ringside, we could have guessed how this one was going to end. Nakamura takes care of Kofi on the outside, then gets a cheap shot on Big E while the ref can’t see. Cesaro lands the Neutralizer and wins, and the artsy boys pick the stipulation. 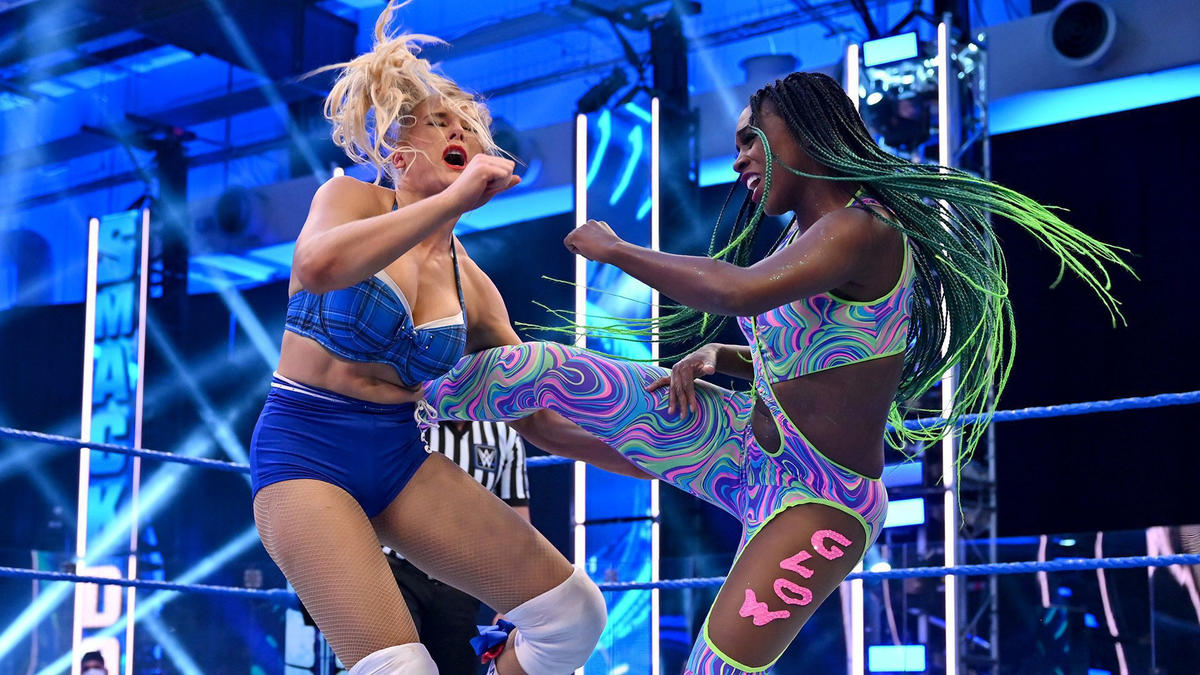 Twitter is currently reminding us about everything that Naomi deserves (real match time, a genuine storyline, multiple runs with the women’s championship) and if you watched Friday night, you definitely understand why. Naomi has spent the last 3 years since being SmackDown women’s champ mostly in the midcard; she’s had a few title opportunities, such as against Bayley back in February, but usually those are one-offs. She doesn’t get to be involved in a long term story, doesn’t get built as a challenger. And it sucks! Naomi is incredibly talented and has a fun gimmick that people don’t seem to get tired of. Everybody likes neon! So why is she jobbing to Lacey Evans in a three minute pee-break match? I really wish I knew. Lacey won with the Women’s Right, but this isn’t really a match worth covering. It’s not Lacey’s fault, but when you consider the championship opportunities both women have had in the past year, it’s kind of bonkers. Naomi has been with the company since 2012. She’s proved time and time again that she’s more than capable of leading the brand. And yet, here we are, in a random match that doesn’t even last as long as the commercials at the beginning of Bob’s Burgers on Hulu. 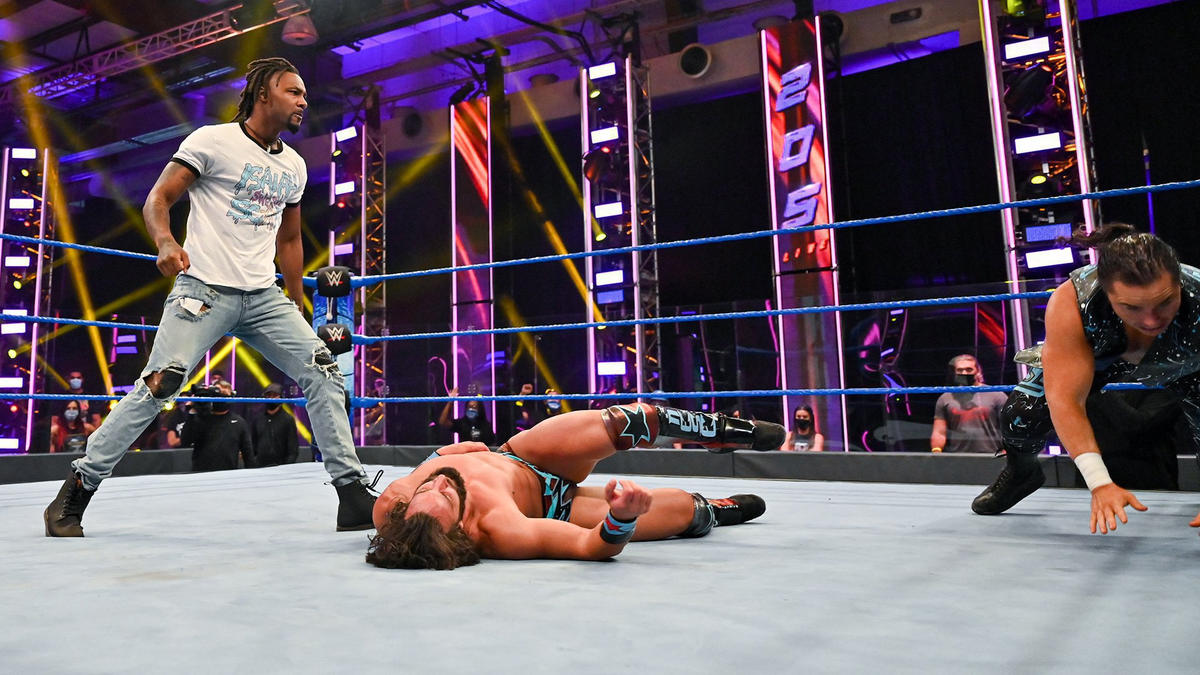 A Friendship is Born

Tony Nese has been quietly carrying 205 Live for the past few months; he manages to do absolutely everything asked of him, including turning face and heel about as often as Big Show in 2002. Last week, we got the idea that he might be a nice boy again, as he ran out to save one time partner and professional man-you-can-take-home-to-Mom, Isaiah Swerve Scott, from a beat down at the hands of EverRise. EverRise, who clearly missed their true calling as a late 90’s boy band, challenged Nese again this week, as he went one on one with Chase Parker. Parker managed to hang in for a while, but Nese won with a hard spinning kick to his head. Parker and partner Matt Martel then attacked Nese, which lead to Swerve coming out to make the save. The two brand new bffs stood tall to end the show, and we all rejoiced in the power of enemies-to-friends.