Following the Royal Rumble, WWE trotted Edge around like their favorite toy, sending him to all the brands this week. They also let him steal Dolph Ziggler’s hairstyle and flat iron those gorgeous blonde waves, so it was a mixed bag. In other news, Finn Balor and Johnny Gargano showed up to NXT wearing the exact same black jeans, so that must have been embarrassing. 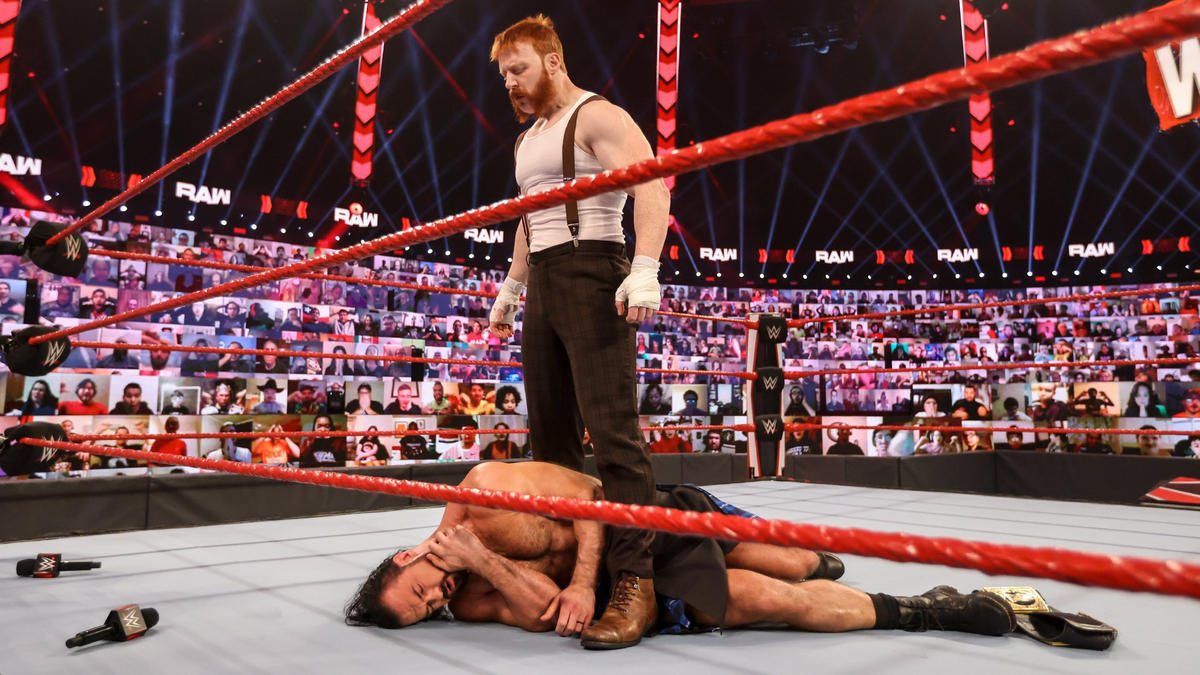 Drew McIntyre kicked off Raw with a big congratulations for beating a man who has wrestled maybe six times in the past decade. Edge interrupted, because he’s Edge and he anchored Vikings and can do whatever he wants. McIntyre was psyched to have the Hall of Famer join him, prompting Edge to ask why McIntyre wants to be his BFF instead of kicking his face in. McIntyre’s constant need to be liked became the theme of the segment, as pal Sheamus came out to defend his honor. Edge warned McIntyre he had a target on his back, and the Scot turned around right into a Brogue Kick. Sheamus’ turning on his longtime friend has been teased for some time now, and it makes sense to knock this one out before we see McIntyre and Edge at Mania. With both these guys, it’ll no doubt be a great match, even if we already know Sheamus isn’t getting any closer to that WWE Championship. 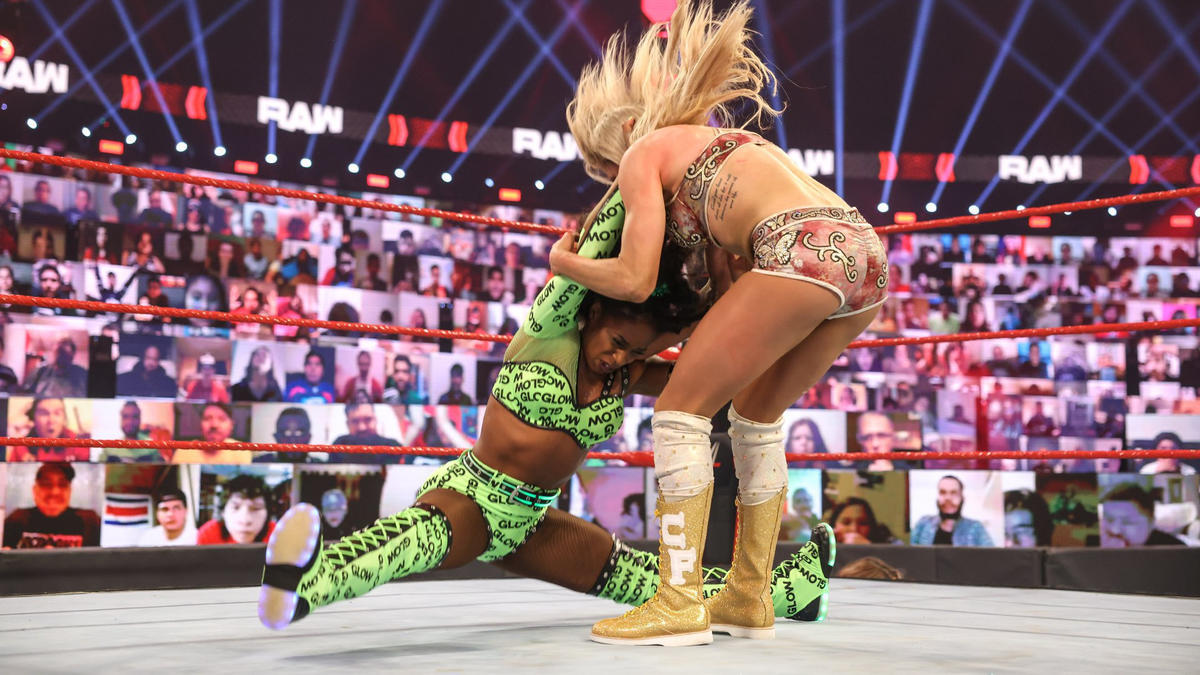 After capitalizing on Charlotte Flair’s disdain for her dad’s new sugar baby, Nia Jax and Shayna Baszler have become Women’s Tag Champions again. This week, Raw continued to devote themselves to the honorable cause of just putting two random women in a tag team and hoping it kind of works. We got a triple threat between Charlotte and Asuka, Mandy Rose and Dana Brooke, and the new team of Lana and Naomi. Charlotte made a point of telling Asuka that she was 100% focused on getting the titles back and didn’t care about her dad anymore, and yet as soon as his theme hit, she tagged out and left the match. That was it! One reminder of her father and Charlotte’s hitting the road. Don’t say WWE doesn’t know how to make a character relatable. This was still a good match, no surprise considering who was in it. We got to see some great stuff from Naomi, who is a very welcome addition to the Raw women’s division. After Charlotte played hookey to yell at her dad a bit, Asuka got hit by a Rear View to score Naomi and Lana the win. I certainly don’t hate Naomi getting a title opportunity, even if it’s for the titles no one really seems to care about anymore. Lana staying involved with Baszler and Jax makes sense, even though this feels like the … Third time they’ve put her in a tag team instead of letting her work on her own. Lana and Naomi have recent dance history, so it’s not completely random, but it doesn’t quite click for me yet either. 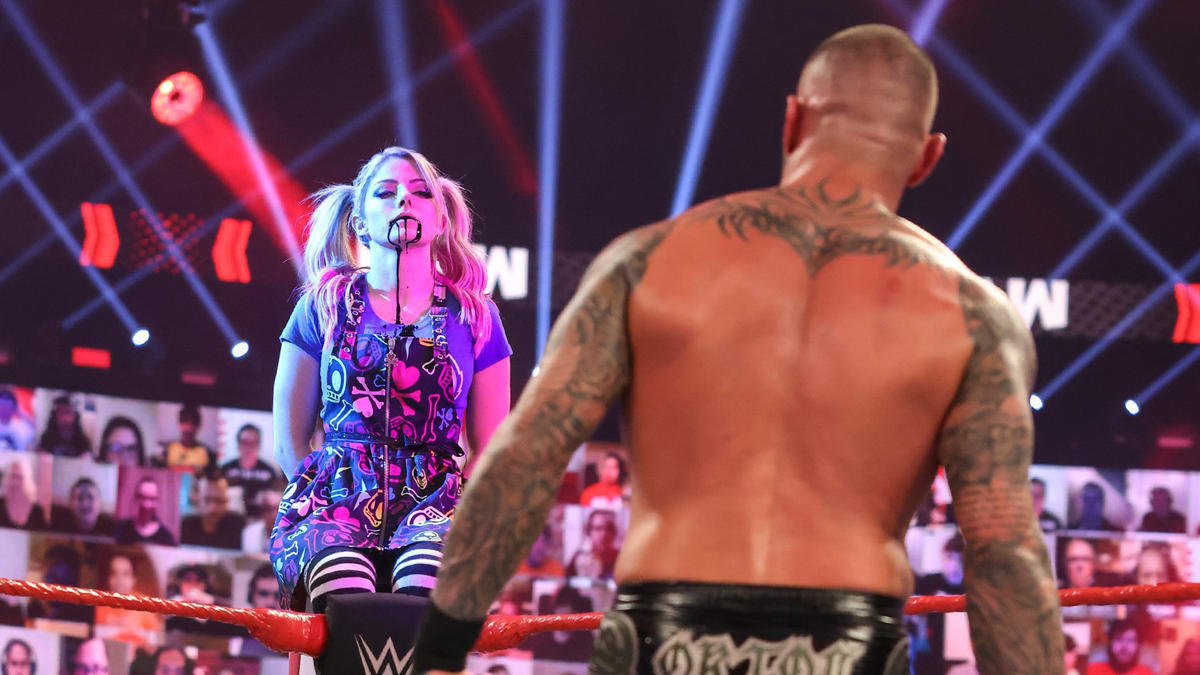 Legend Killer Gives it Yet Another Go

Edge wrestled his first match on Raw in 10 years this week, facing the man who comes second to COVID-19 as the biggest villain of 2020: Randy Orton. Edge started things off coming in hot, trying to get a submission on Orton, but the Viper was able to escape. Orton wanted the RKO, but Edge got the Edge-cution for a 2 count. Edge launched Randy into the barricade to buy himself some time, yet still couldn’t get another pin. Orton took over again with a big slam onto commentary and targeted Edge’s neck; you know, the one that kept him out of the ring for a decade. Orton called for the RKO, but some jazzy children’s music played, and the camera zoomed out to reveal Alexa Bliss sitting on the turnbuckle with blood dripping from her mouth. Randy, who has apparently never met Asuka backstage, was so horrified by the sight that Edge speared him into oblivion and got the win. This was a great match between Edge and Orton -honestly, probably better than their bout at Mania that went 3 hours too long- but I’m not super intrigued by Randy’s still being stuck on the playground. 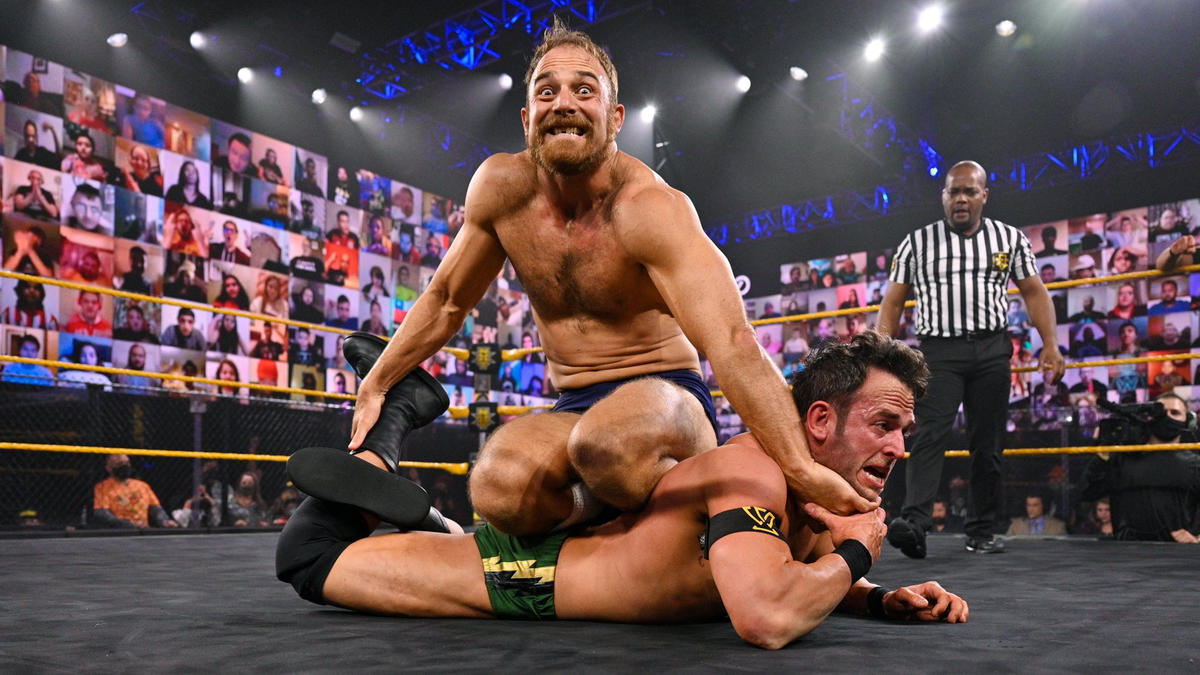 Edge made a visit to the black and gold brand this week, calling out both Pete Dunne and champ Finn Balor. He said he’d be watching the boys closely at TakeOver Vengence Day, and even as someone who’s been very impressed with both Balor and Dunne lately, I can’t say I’d be thrilled to see Edge challenge for the NXT title. Like, it would be cool in the same way that trying those Taco Bell Mac and cheese fries was cool; I can say I did it, but nobody really enjoyed the experience. At least we got to hear some live fans cheering for Edge.

Our main event went in a slightly different direction as new friends Tommaso Ciampa and Timothy Thatcher teamed to take on the gold standard of friendship in Undisputed Era in another Dusty Cup match. I get what they’re doing with Ciampa and Thatcher, even if both men would be better served in singles competition. This was a great technical match, a nice change of pace from NXT’s typical spot-filled main events. Cole and Ciampa started off, neither able to get the upper hand before making tags to their respective teammates. Thatcher was able to get Strong in a submission, then tagged in Ciampa who hit a big forearm strike. Roddy kicked out and barely made it to his corner for a tag. Cole ran wild and hit an ushigoroshi, but Ciampa countered a Panama Sunrise attempt. They traded a couple other near falls, until Ciampa landed Willow’s Bell on Strong to get the win. Ciampa and Thatcher advancing isn’t a huge surprise, but UE fought the good fight here. 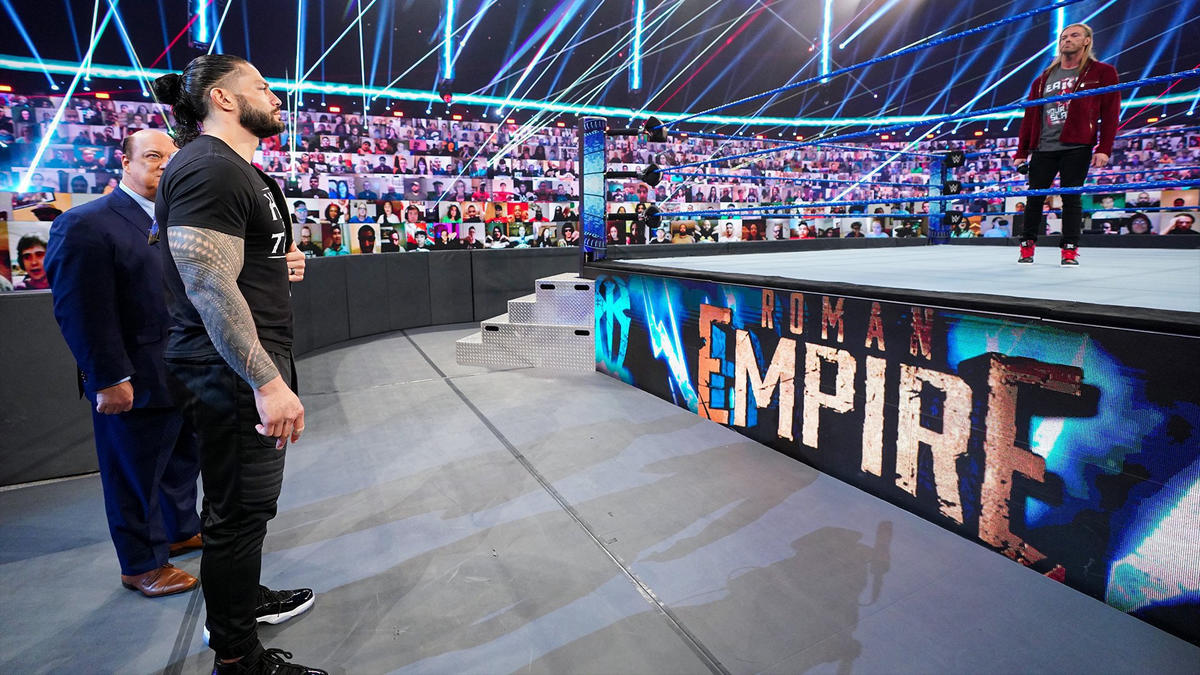 Roman Reigns opened the show Friday by calling out the most popular man in WWE right now; Edge. He and Heyman signaled for Edge’s music and pyro to be played for him to come out, which was honestly very kind of them, but Heyman was informed Edge was, in fact, not in the building. Roman took this one pretty personally, demanding the Rated R Superstar make his decision on his Mania opponent tonight. Edge, who has never disappointed a day in his life, showed up later in the night. He came to the ring to philosophize about which title he should challenge for, but didn’t get very far into it before Reigns interrupted. Edge bragged about living rent free in Roman’s head, causing the champ to dismiss Uso and Heyman as backup. He demanded for Edge to acknowledge him as the champ du jour, but Edge wasn’t intimidated. He gave a sneaky Canadian smile as Kevin Owens jumped Reigns from behind and hit a stunner. The show faded out without a choice from Edge, and with Reigns writhing on the mat. While I’m hoping the KO and Reigns saga is officially over, this was a solid way to keep Edge’s options open and have Reigns come across as the arrogant champion he is. 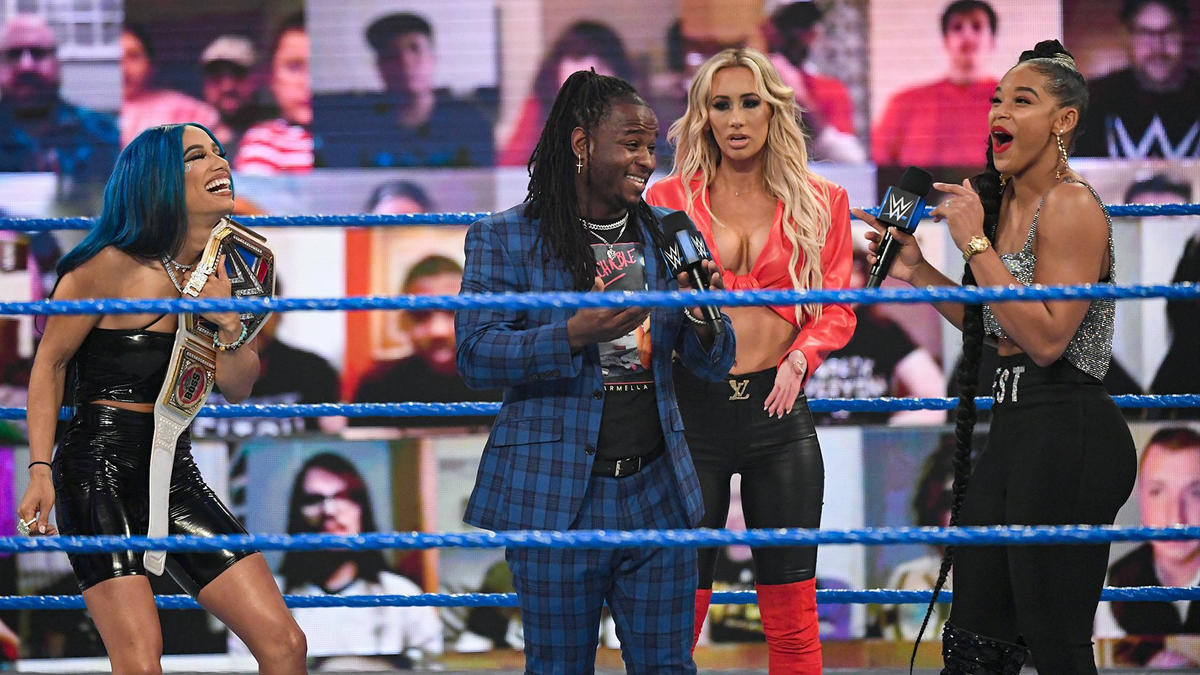 After showing a very adorable video of her parents celebrating her Rumble win, Bianca Belair came to the ring to remind us that no one wears bedazzles like she does. Absolutely no one. She gave both Asuka and Sasha their flowers as champs, until she was interrupted by Reginald, who somehow cuts a promo better than most recruits after a full year in NXT. The sommelier cautioned Bianca against challenging Banks, then brought out Carmella to brag about how she beat Sasha twice. The two were then joined by The Boss, who invited Bianca to make things official at Mania. Reggie piped up once more that Belair didn’t stand a chance against Banks, prompting Bianca to deliver a couple hair whips to teach him a lesson. Belair vs Banks seems like a sure bet for Mania, and it’s surely going to blow my mind. 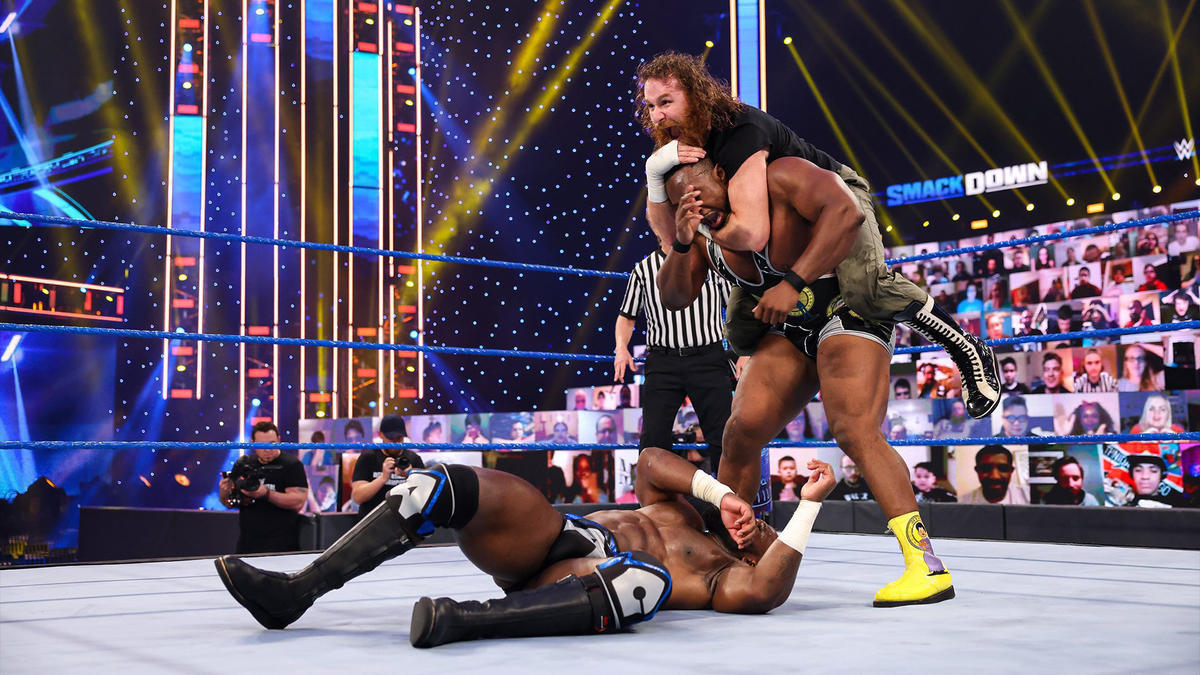 Big E continues to cut the best promos in all of WWE, this week likening himself to the Statue of Liberty, although she sadly does not stack up in the body department quite like E. His opponents this week, Apollo Crews and Sami Zayn, were the tired and poor, respectively. Crews started out hot, landed triple German suplexes on Big E. E nailed both challengers with big strikes in the corner, but Sami dragged him to the outside. Zayn took over, handling both Crews and E as he sent the champ into the turnbuckle. Big E came back and hit a splash on both men, but Crews got an enziguri. Apollo got thrown to the outside, and E countered a Helluva Kick into a huge slam. Big E got a huge double belly-to-belly to both men, but the future documentary award winner still managed to get a Helluva kick on E. Apollo pulled Sami off just in time, then teed off on Zayn on the outside. He tossed him over the barricade and slid back in the ring to meet a Big Ending, securing E the win. This was a great match and a good way to put this feud between all three to bed. Big E has more than delivered as IC champ; I’m psyched to see what’s next for him. 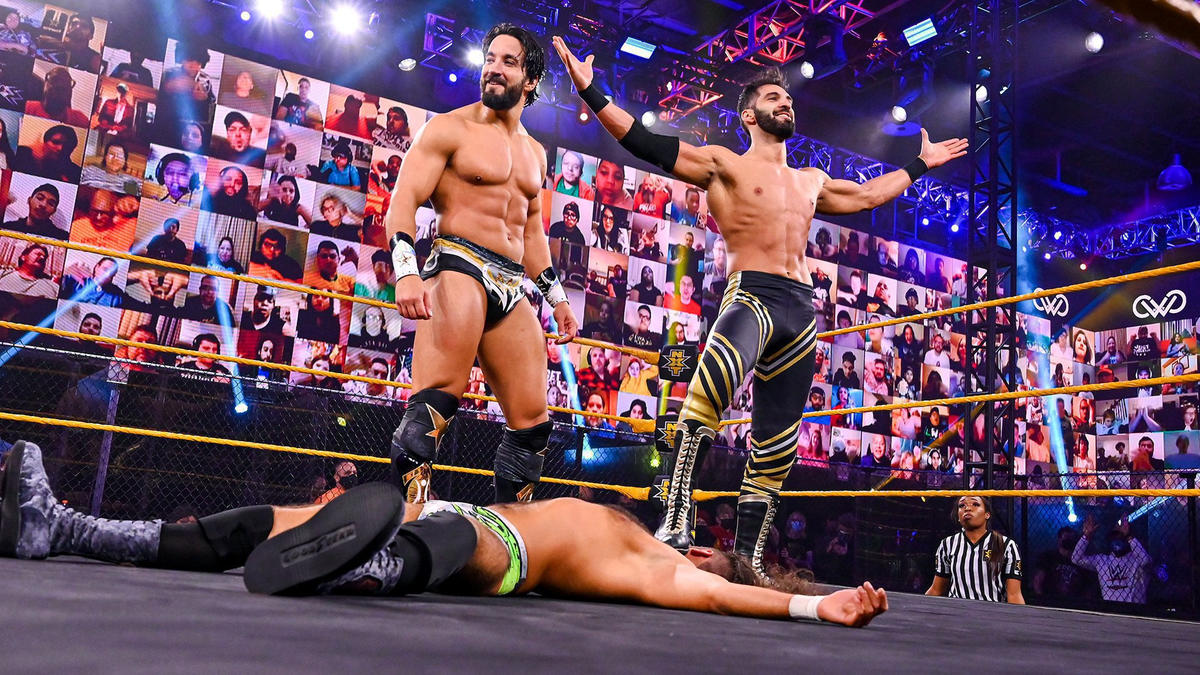 Young Guys Jumped By Old Men in Their Thirties

205 Live paused it’s Dusty Classic coverage this week to give us August Grey and Jake Atlas in the main event. I like both these guys- Atlas looks like the nice cashier at Wawa your grandma wants you to date, and Grey has my exact fashion sense. They started off on equal footing, each trading control on the mat. They exchanged strikes in the center, then Atlas landed a neck breaker. Grey came back with a huricanrana and hit some chops, but Atlas connected with a big boot. He hit a beautiful standing moonsault and a suplex for a 2 count on Grey, but got caught by a right hand. Atlas slid to the outside and Grey landed a dive, then hit a crossbody to get the win. Immediately after the victory, Tony Nese and Ariya Daivari ran in to beat down both Atlas and Grey for being young and successful. Which, in all fairness, is a relatable heel trait. A Trip to the Potato Farm: AEW Dynamite Recap and Review