In a week that gave us the most legendary wedding since Meghan and Harry, WWE showed they weren’t afraid to pull out all the stops to start the new year off on an incredibly aggressive note. 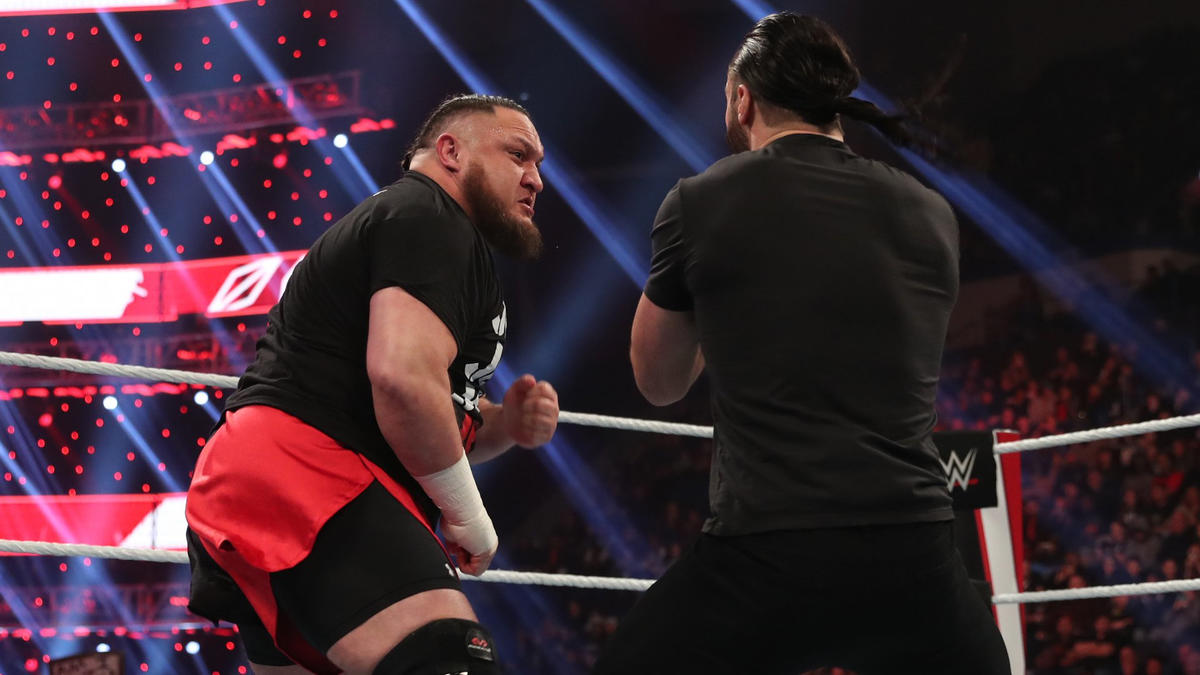 Seth, Akam, and Rezar continue to terrorize Raw, but now our plucky protagonist, Kevin Owens, has some backup. Raw kicked off with Owens running down the trio primarily for attacking Rey Mysterio last week, who then went on to lose the US Championship to Andrade days later. Rollins and AOP came out to monologue about the greater good and probably some Harry Potter metaphors, but Owens was more of a Trek kid and didn’t care to listen. He went after the group but the numbers quickly caught up to him. But suddenly, like a beacon of light in these dark times, a tuba beat dropped. Samoa Joe rushed out to back up Kevin, putting Seth in the Coquina Clutch until AOP forced him off. A good twenty security officers came down to try and keep everyone apart, and the segment ended with Kevin jumping from the ring post onto a crowd of security guys. We then saw the new bffs backstage, where they agreed to leave the arena but promised retribution for next week. 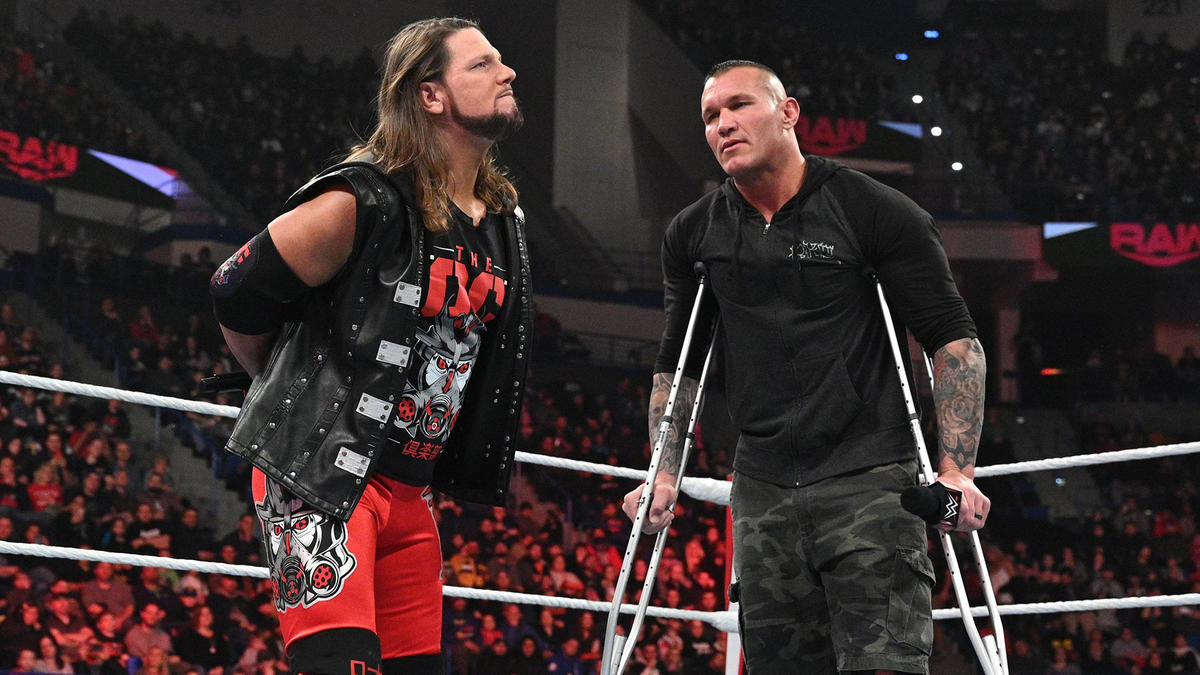 At last, it was the moment we’ve all been waiting for. After suffering an injury to his leg at a house show in Hershey, the place no one wants to end their career, the Viper made an emotional announcement Monday night. He said the injury was worse than originally thought, and he was suddenly concerned he may not be able to make it back by Wrestlemania. AJ Styles came out to offer his sympathies, from one man with extremely questionable Twitter likes to another. He mocked Orton’s injury and said he’d see him at mania even if he was not to compete. Styles then kicked Orton’s crutches out from under him. But it turns out Randal is a much better actor than 12 Rounds 2 gave him credit for, as the whole thing was a ruse, and he hit Styles with an RKO. The crowd was super into it; this version of Orton who does what he wants to good and bad guys alike is very entertaining. His lawless chaotic energy works with everyone he’s in the ring with and let’s him play whatever role is needed in the moment. Orton vs Styles is a match that’s going to be very good on a wrestling front, but I’m also already googling lots of redneck jokes. 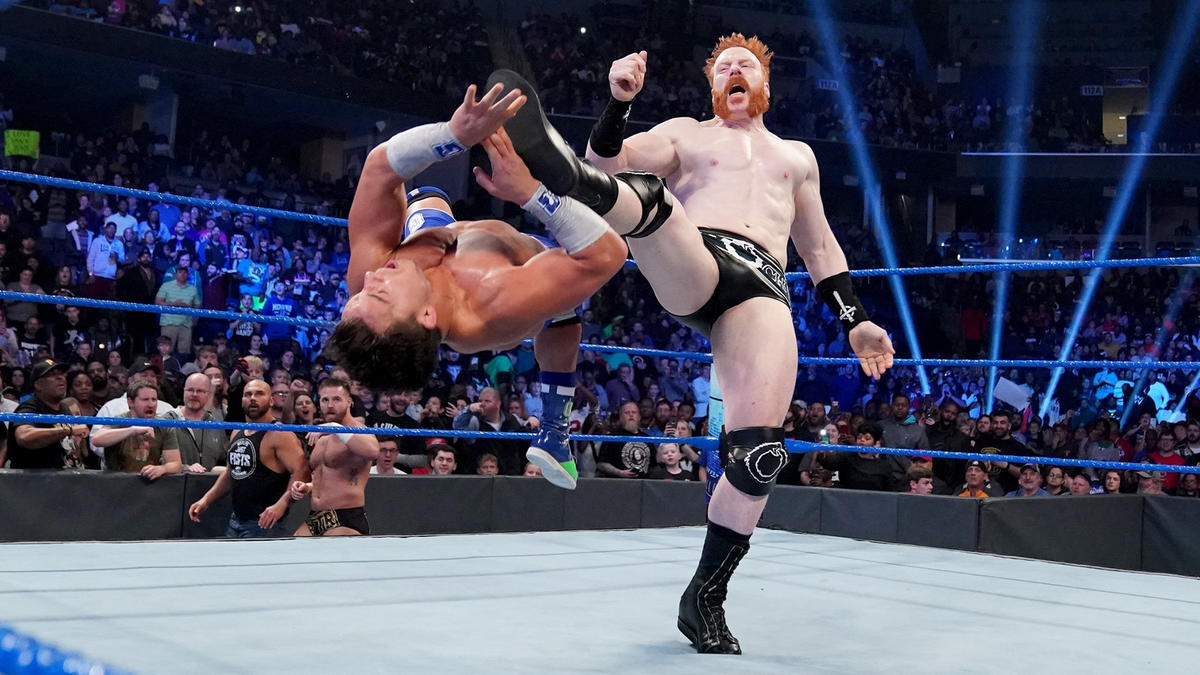 After weeks of promos where he promised to break down some doors and crush some skulls, Sheamus finally made his long awaited return last night. While complaining about the level of comedy in wrestling these days, The Revival were interrupted by a supportive Shorty G, who told them to love all parts of themselves, even the ones people make fun of on the internet. This prompted Dash to claim Shorty could indeed to anything he set his mind to, except beat either of them in a match. Doctor G took him up on that offer, resulting in a fairly short match where Wilder ultimately tapped to the Ankle Lock. Both Wilder and Dawson went after Gable immediately, but as they were beating down the worlds smallest basketball player, Sheamus’ entrance hit. He chased The Revival out of the ring, but then turned around and Brogue Kicked the former Chad inside out. 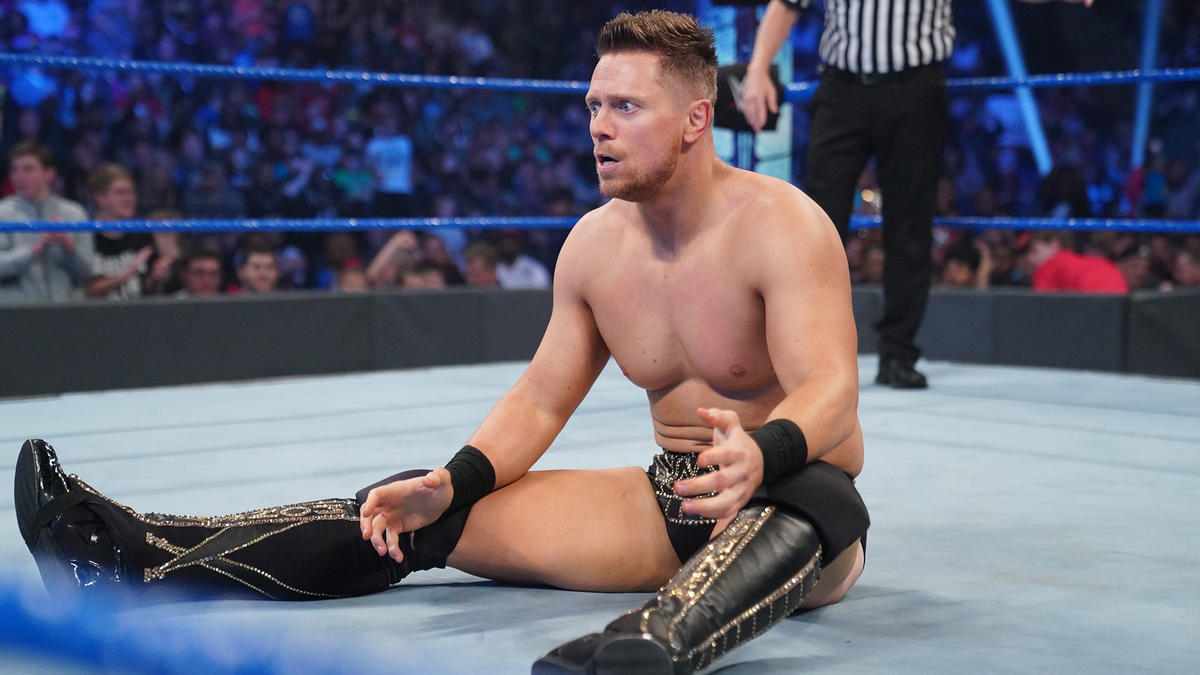 Kofi Kingston tried to brighten Miz’s clown-tinged nightmares with some New Year’s pancakes and a reminder of all he’d achieved in the past decade, but Miz was harboring more repressed anger than a 13 year old at a family reunion, and really didn’t want to hear it. He and Kingston went one on one, with Miz’s temper threatening to get the better of him. Too caught up in his own problems, Miz had trouble staying focused and Kingston was on his game and got the win with a quick roll up. A stunned Miz attacked Kofi post match and had to be chased off by Big E. Shortly after, Cathy Kelly went backstage to interview The Miz about his new attitude. But instead, a surprise John Morrison answered the door. I miss 2011 too, guys. Kind of weird WWE already gave away Morrison’s return to the company, but I guess they really did that back when they announced he’d signed on Backstage. No idea what this means for his role on SmackDown, but I’m excited to see him and Miz together again. Friendship truly endures, just like wrestling has always taught us. 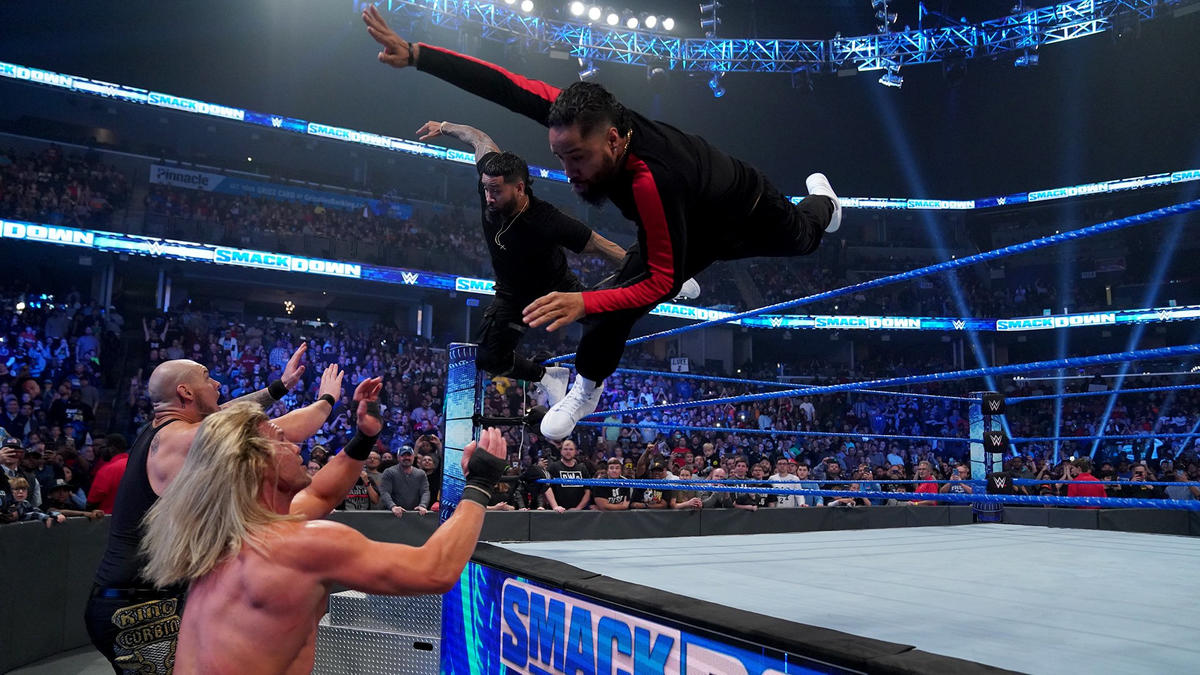 We got Sheamus and John Morrison, and somehow SmackDown still wasn’t done. The main event saw Dolph Ziggler and King Corbin take on Roman Reigns and Daniel Bryan, allied over the egregious misuse of animal products in previous Corbin matches. Ziggler and Corbin are the perfect obnoxious team and their mix of baldness and too much 2006 flat ironed hair works really well together too. Reigns got the worst of the beating early on, but Bryan got the tag and ran down Ziggler. Suddenly the the lights went off, the red hue hit, and Daniel Bryan sighed loudly. The Fiend appeared outside the ring, no sold a dive, and ran Bryan into the post. He got the Mandible Claw in, choking out Bryan before disappearing. Ziggler and Corbin took advantage, because matches don’t stop even for run-ins from clowns, handcuffing Reigns to the bottom rope. They attempted to go to the dog food well once too often, and were stopped by the arrival of the Usos, sporting some very fresh haircuts. Jimmy and Jey super kicked the dog fan club and helped Roman up, bringing the three together again on the blue brand. 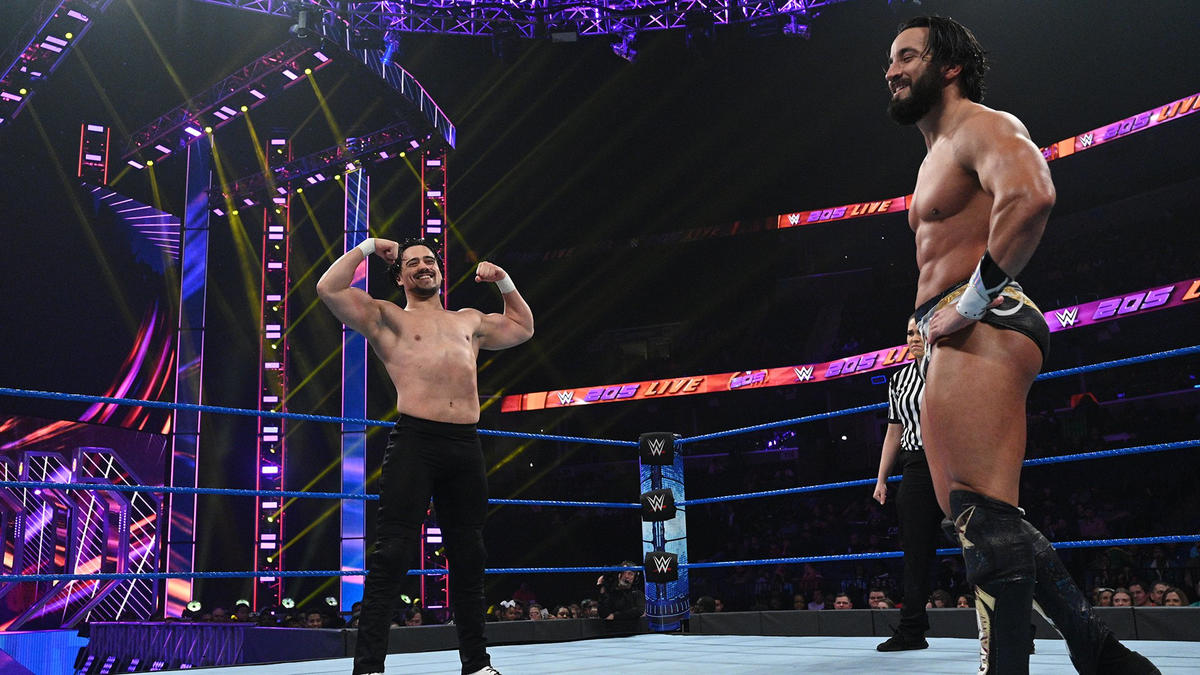 The flippy boys are back after an extended holiday hiatus, delivering some good matches to absolutely no crowd reaction, as always. The first was Ariya Daivari and Danny Burch, who is on something of a singles run in 205 since Oney Lorcan has been MIA. Burch had Daivari in a submission when a mysterious masked man appeared ringside to distract them! When the ref wasn’t looking, Daivari hit a low blow and got a roll up. The masked man revealed himself to be a sneaky little Brian Kendrick, who claimed he had founded the cruiserweight division and short pride. He and Daivari are an interesting pairing, and teaming up because of their dislike for newcomers to 205 is a good move. In the main event we got Angel Garza and Tony Nese, marking maybe the first time that much baby oil has been in one place. A fan refused to kiss Garza during the match, which is a capital offense and something I can’t relate to on any level. This was a very solid match up that make me remember Tony Nese was Cruiserweight Champion within this calendar year. Wild. Garza got the win with the wing clipper, successful in his first match since winning the title in December. 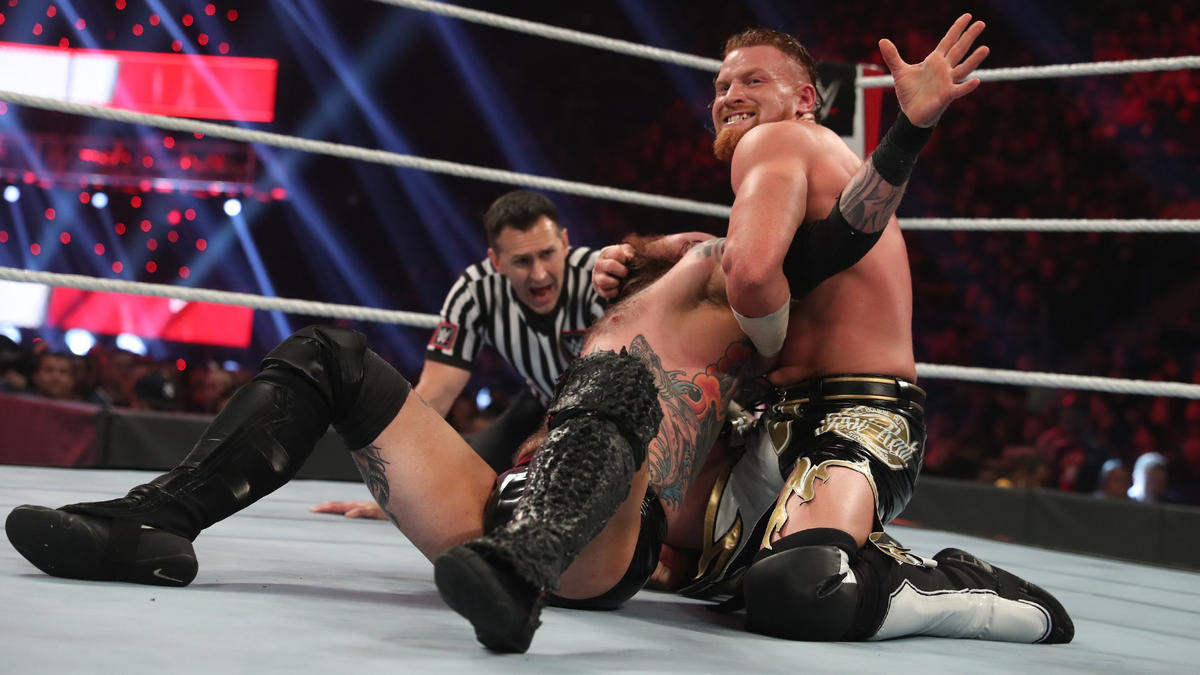 WWE Banger of the Week: Aleister Black vs Buddy Murphy

This match had everything I like; big strikes, big knees, big men trying their best to decapitate each other. It’s everything bangers are made of. Black and Murphy work together tremendously, and their matches have been consistently must see. WWE has a tendency to take something good and do it so much it stops being good and starts making me feel a little queasy, like when I worked at the ice cream store and had a root beer float every day for a week. But this match made me want just one more between them; Black has come out on top in each encounter, but it never feels like Murphy is worse off for it. Both men looked tremendous here, getting in some very hard hitting offense. Murphy was even able to counter the set up to Black Mass a few times, but was unable to land Murphy’s Law. Black finally caught him with Black Mass, but then dragged him back up and delivered another to ensure the win.