An NXT trainer reportedly tested positive for COVID-19 this week, but I wouldn’t worry too much about that in this high contact sport where everybody is constantly touching each other. Instead, we should be way more concerned about a Bane gimmick in 2020. What’s going on there? Were the Scream masks out of stock? 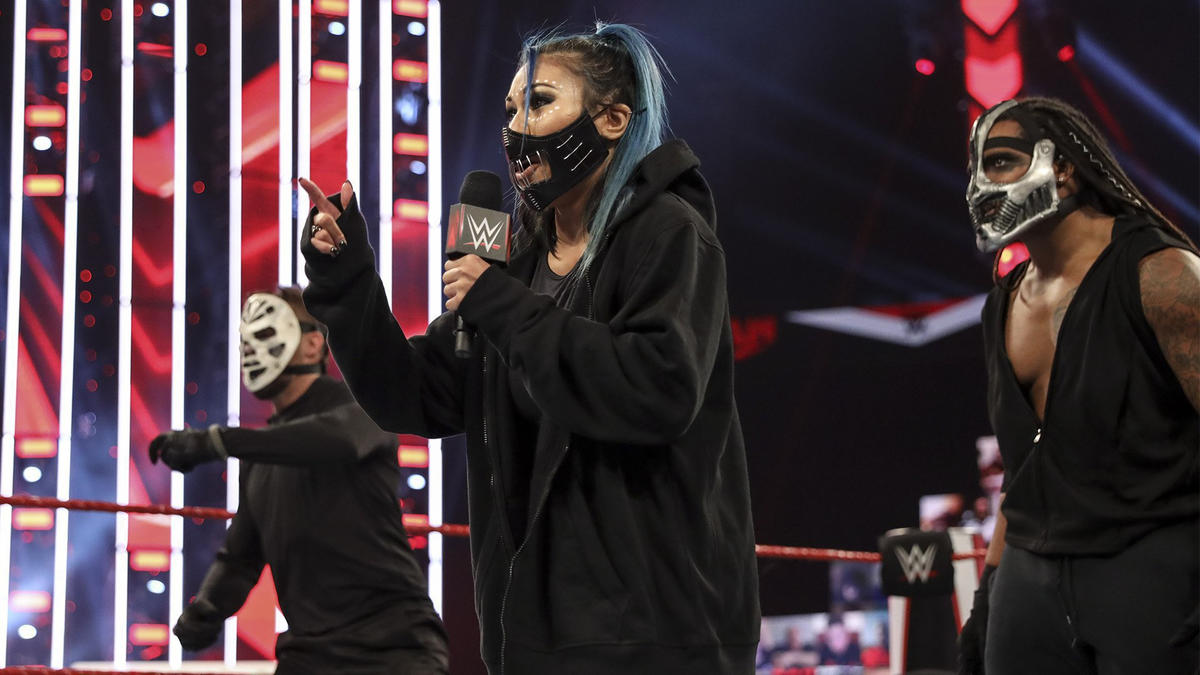 The local hooligans known as Retribution revealed themselves on Monday night, and it was everything we could have hoped for. At least, it was everything I was hoping for, which was a short segment that didn’t last past 11. They opened Raw by popping off those hoodies to reveal some sweet Spirit Halloween generic Max Max masks. Our five main members (didn’t they have like 20 last week?) are formerly known as Mia Yim, Shane Thorne, Mercedes Martinez, Dio Maddin, and Dominic Dijakovic. They informed is that they’d been given contracts, which definitely makes sense after all the times they publicly denounced WWE and caused a lot of property damage, and that they were going to rebuild the company on their terms. Again, The Hurt Business were the only ones who came out to ask about this whole fishy contract situation, but they were outnumbered by the former NXT guys. This lead to our main event, where Benjamin, Lashley, and Alexander took on Slapjack, T-Bar, and Mace of Retribution. Real names. Everybody is entitled to their opinion of how goofy this may make the group seem, but calling a wrestler “Slapjack” actually makes me so much more invested in whatever they’re doing. Like, nameless fake anarchist is boring, but Slapjack? That’s a dude I want to know. This wasn’t much of a match before Mace (previously Maddin) got his team disqualified by going after Lashley on the apron. The whole thing broke down as the rest of the locker room finally got dressed and headed out to beat these Bane cosplayers. During the brawl, Orton laid out McIntyre with an RKO, and that closed the show. The Retribution stuff is silly, but at this point, I wasn’t holding out hope for the group to be taken very seriously. Can’t wait to see Hotcakes and J-Shot in action next week. 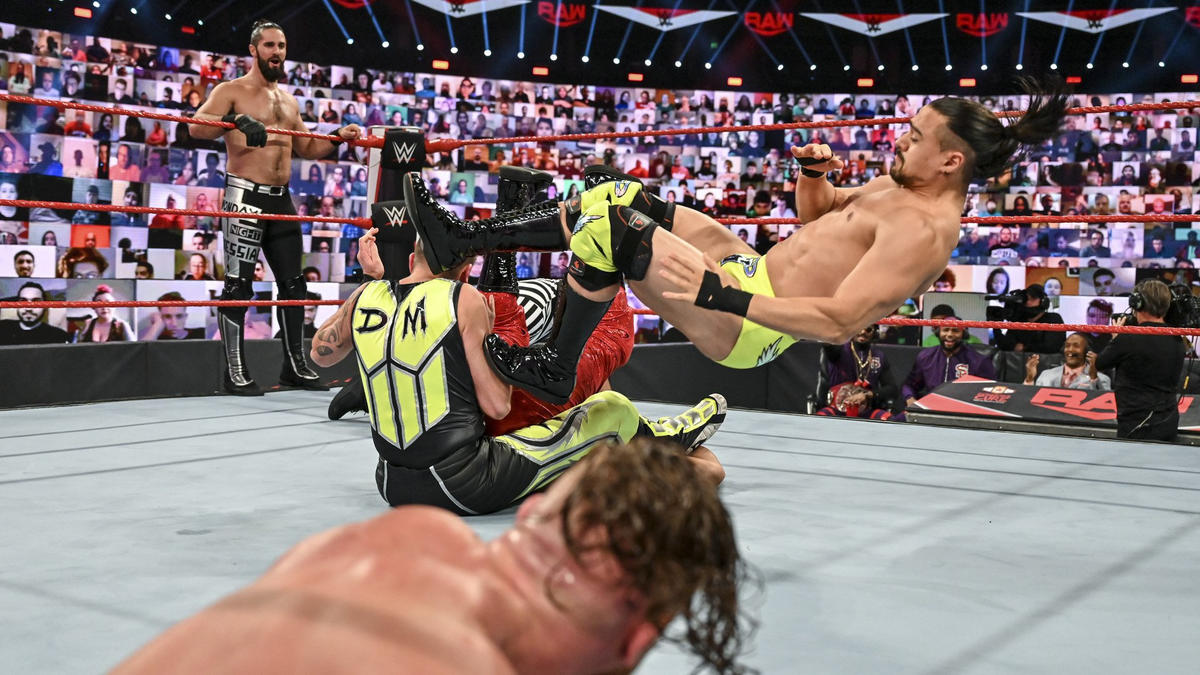 Angel Garza and Andrade seemed to be splitting last week, but it seems they’ve patched things up offscreen in record time, as they competed in a tag team triple threat to determine the Street Profits #1 contenders. The other teams were Seth Rollins and Murphy, who also seemed to repair their friendship in record time, and the literal baby faces in Humberto Carrillo and Dominik Mysterio. This was a surprisingly tight match, with the highflying babyfaces showing off to start. Mysterio and Carrillo were a fun team; I wouldn’t mind seeing them together again. Rollins walked away and let Murphy take a beating from Garza and Andrade, who eventually won when Garza got the Wing Clipper on Murphy. Garza/Andrade vs The Street Profits is nothing new, and it’s a little hard to buy them as serious contenders at this point, but at least this match worked. 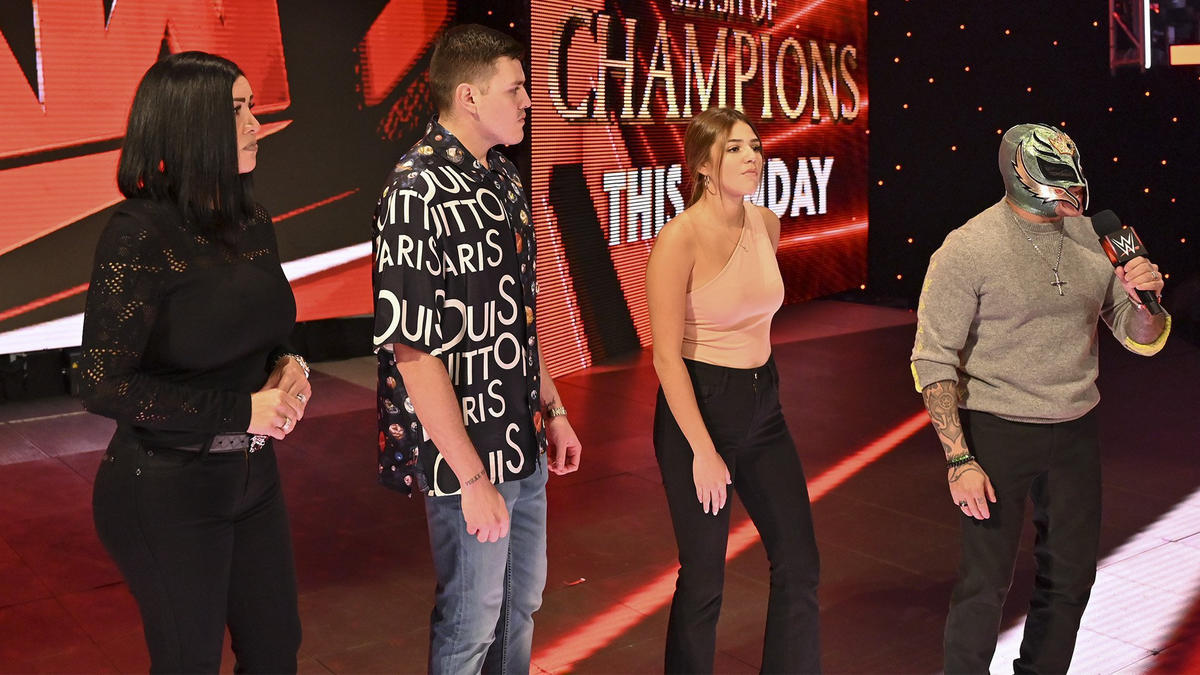 Wrestling and paternity tests go together almost as well as wrestling and live weddings. Seth Rollins continued his never ending quest to make Rey Mysterio’s life horrible, all due to that one time Rey congratulated him on his future child. Rollins brought up a DNA test that first suggest Dominik wasn’t Rey’s biological son. Of course, we covered that one over a decade ago, and it was settled with a totally legal custody match. He then suggested that it was in fact daughter Aalyah who may not be Rey’s child- but she may be Murphy’s! Putting aside the fact that Murphy would have been like 12 when Aalyah was born, this is hilarious and I love it. I love dumb, hokey shit in wrestling, because that’s why I’m watching. I don’t want hyper realistic gritty storylines about friendship and betrayal; I want cheating on your husband and fighting about shampoo. I’m not out here watching As The World Turns for it’s takes on a disappearing middle class, right? You gotta be down for some dumb father angles in this sport. Anyway, Rey said that Aalyah was naive and she ran off to try and find her real dad. Personally, my money’s on Adam Pearce. 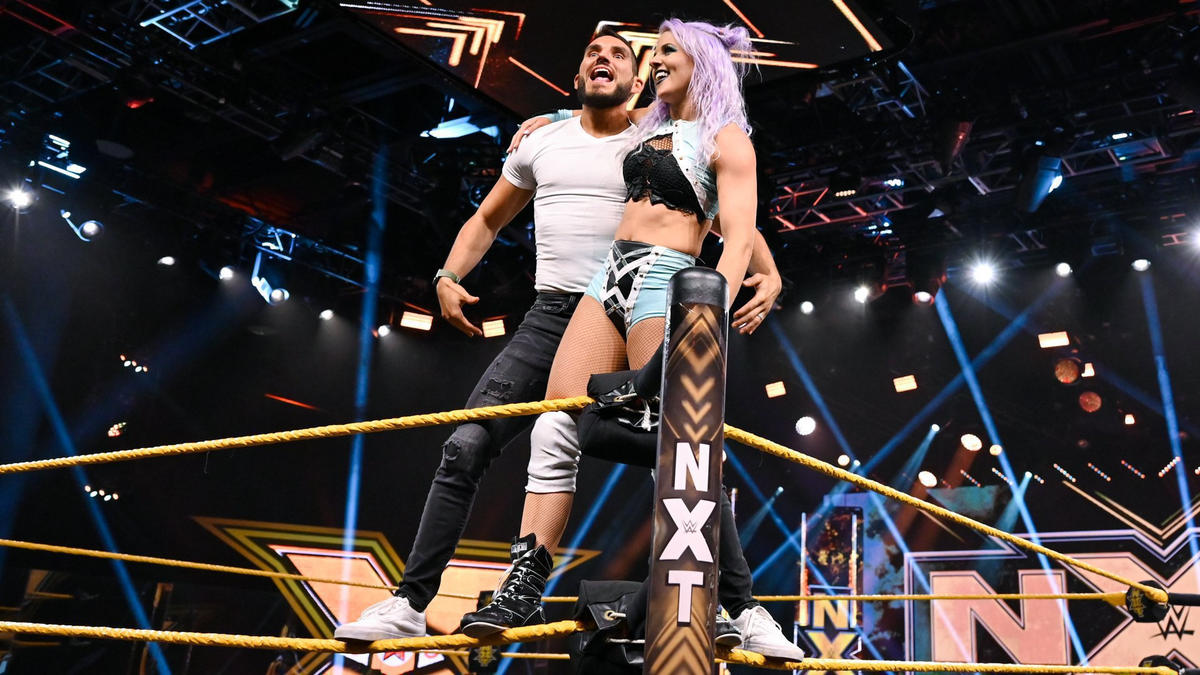 NXT prepared for the upcoming TakeOver 31 by deciding Finn Balor and Io Shirai’s next challengers this week. The show kicked off with a #1 Contender Battle Royal for the NXT Women’s Championship. Candice LeRae started off early by attacking Tegan Nox before the match, going after her knee like any good heel would. There were a lot of women in the early goings, including some PC recruits I don’t think I’d seen on NXT before, but Rhea Ripley and Raquel Gonzalez cleared most of them out. The two ended up knocking each other out, going over the ropes together like a Lifetime enemies-to-friends movie. Dakota Kai and LeRae teamed up to take out Kacy Catanzaro, but Kai was then thrown out by Shotzi Blackheart. The final two, LeRae and Blackheart, ended up on the apron, and Candice managed to kick Shotzi off the stairs to secure her spot against Io. This was a fun battle royal with a surprising enough finish, and another match between LeRae and Shirai should be really good.

Our main event was a Gauntlet Eliminator match, a stipulation that I guess exists, between Kushida, Kyle O’Reilly, Bronson Reed, Cameron Grimes, and Timothy Thatcher. Kushida and O’Reilly started things off, then Reed entered the mix. Kushida was eliminated first by Reed, after interference from Velveteen Dream. Putting notable solid dude Kushida in a program with Dream, accused pedophile, is pretty pits. It’s shitty. Thatcher came out next, followed closely by Grimes, and all four men got into it. Reed showed off some big power moves, but O’Reilly took him out with knee strike to the back. Kool Kyle followed it up with a surprise roll-up on Thatcher, leaving him and Grimes. Cameron, whose gimmick is either 1920’s traveling salesman or auditioning for the Night Circus, missed his finisher and opened the door for O’Reilly to get a heel hook. Grimes tapped out to mark a great day for the country of Canada. Undisputed Era came out to celebrate with their boy, which was really cute, thanks. O’Reilly is an unexpected challenger for Balor, but it’s hopefully a sign of NXT shaking things up. 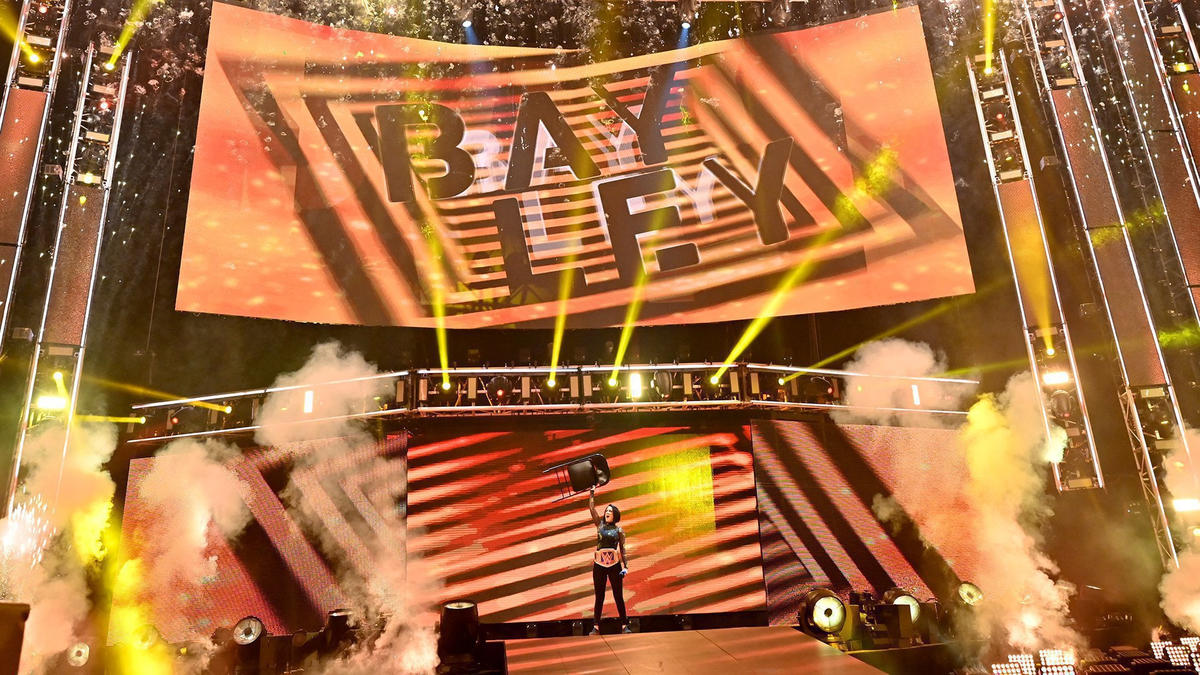 Bayley’s transformation from pure-hearted babyface to obnoxious Karen to cruel heel has been much better than I could have anticipated. While she took some time to find her footing as a cowardly bad guy, her turn on Sasha Banks has upped her intensity in a whole new way. She took time from her busy schedule of attacking Sasha’s bone structure to call out Nikki Cross ahead of their Clash of Champions match. Cross had claimed that she stood a fighting chance against the SmackDown champ without Banks on her side, but Bayley reminded her that she’d thrown Banks out herself. She held up the chair and told Cross to imagine what happens next, and that she could use Banks as a reference point. This was the kind of promo that really would have benefited from a live crowd drowning her in boos, but Bayley’s delivery here was excellent. She’s come a long way on the mic and it’s great to see her so comfortable in her role. 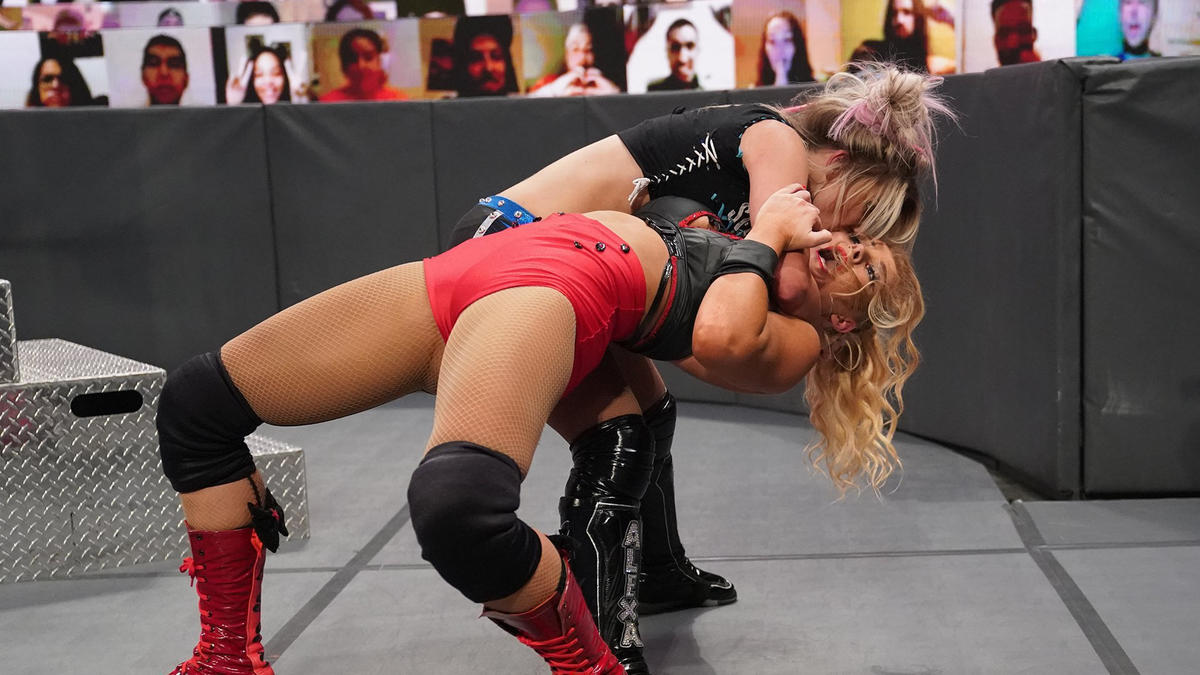 Alexa Bliss is on her best Derek Zoolander-Relax.mp4 in 2020, and I can’t help but admire her for it. This week, she faced Lacey Evans, after delivering a Sister Abigail to the heel last Friday following her match with Nikki Cross. Bliss started this one out as her usual self, sweet gymnastics moves and all. Evans looked strong here with some solid counters, staying in control for much of the match. Bliss started to make a comeback briefly, and we heard Bray Wyatt’s weird little laugh to congratulate her. Evans hit a backbreaker, but the red light crew hit the gels and Wyatt’s theme played for a moment, and Bliss went berserk. She took down Evans and kept going after her even when the ref called the match, hitting another Sister Abigail on the outside. As she left, she gave Roman Reigns the side eye on the ramp. I didn’t know how badly I wanted to see that match until this exact moment. 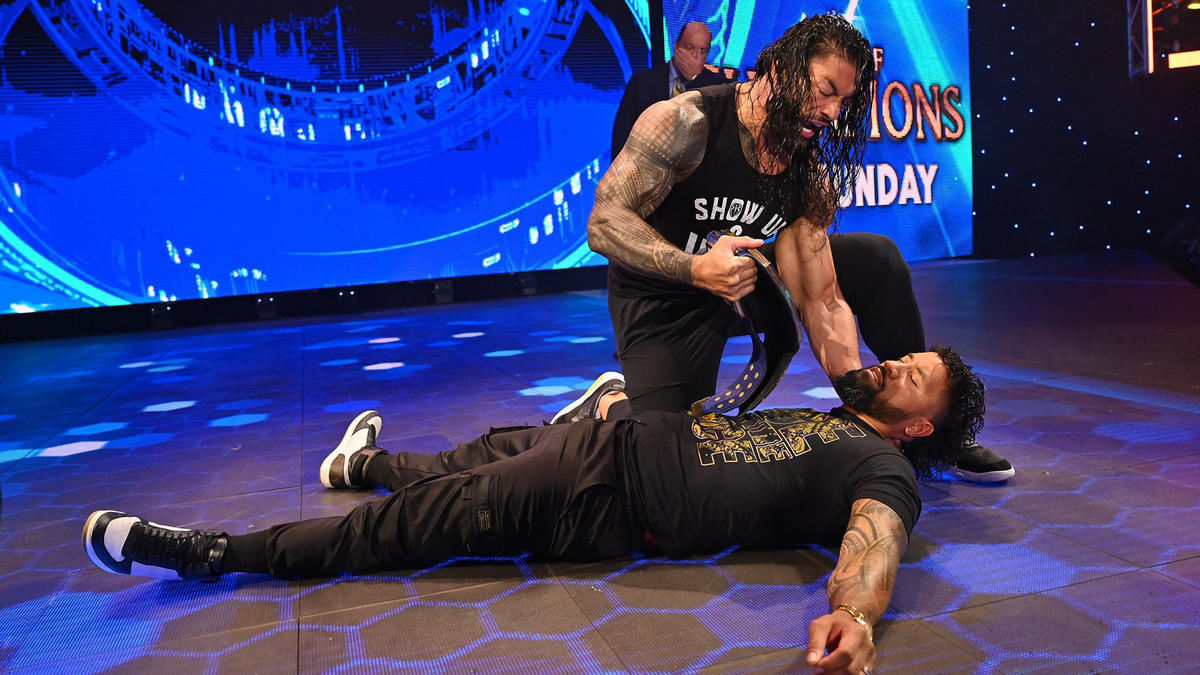 After ending last week’s SmackDown with a look that would have crippled lesser men, Jey Uso announced he had some questions for Roman Reigns. Reigns spent most of the show chilling with Paul Heyman in his dressing room, but made an appearance in the ring with his relative to confirm the rumors; he was the cousin who was good at everything, and the whole family hated him for it. He told Uso that while he was half of a great tag team, that really wasn’t shit when your family member is Roman Reigns. Reigns asserted that the family depended on him, not Jey, to make them proud. Uso then rushed Roman on the ramp, but was hit with a Superman punch. Reigns told his cousin to “take his payday” and leave it at that. This was great work from both men, with Jey as the impassioned babyface who’s determined to make a name for himself outside of his team and outside of being Roman’s cousin. Reigns’ heel persona has been fantastic, and his admiration for his friend mixed with his knowledge that he’s simply better really worked here. While the result may be predictable, I’m looking forward to seeing these two go at it on Sunday. 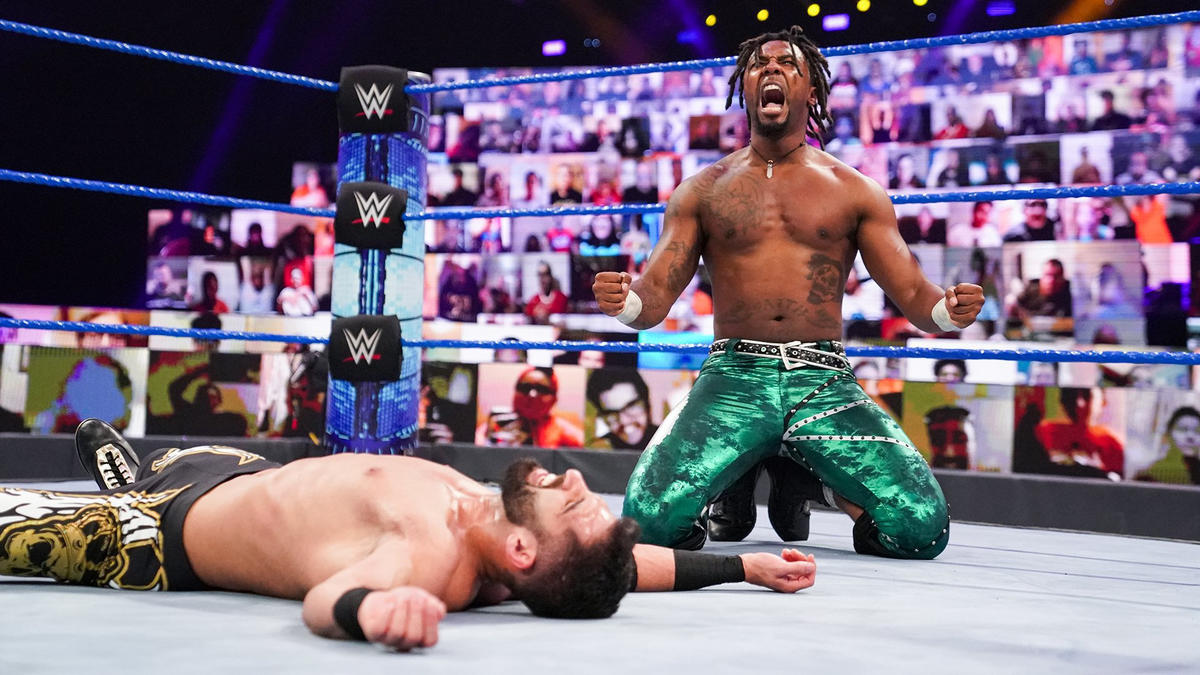 205 Live is still pushing “Thee” as a nickname for the man formerly known as Tehuti Miles, so by comparison, Isaiah “Swerve” Scott seems like a very sweet pet name. Scott faced Ariya Daivari in the main event, but there was no mention of Daivari’s 10k on the line. If I were in a company where my coworkers offered $10,000 to beat their ass, I’d be there early every week. These two were pretty evenly matched throughout; Swerve hit an impressive headscissors early on, but Daivari came back with a big draping DDT. Scott kicked out of the splash and evaded the hammerlock lariat to hit the House Call and pick up a win. We’ll probably see him and champ Escobar get after it in the next few weeks, but I can’t tell if they’re ready to put the title on Scott just yet.

Is "Hangman" Adam Page the Voice of a Generation? (Part Two: Ballad of the Fifth Wheel)