As we trod through an election week that’s easily felt 8 years long, WWE reminds us that while we might be stuck in a horrible political landscape that feels powerless to enact real change, at least we’ll always have dick kicks in wrestling. What a comforting thought. 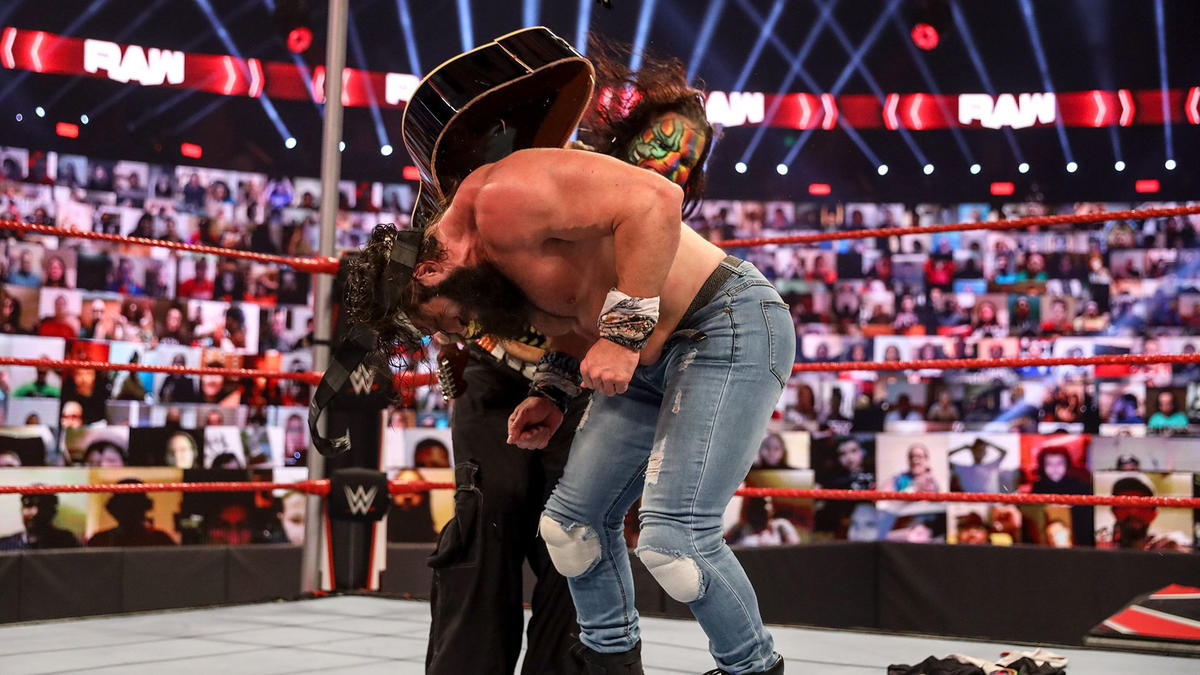 In their continuing quest to ensure no one has a nice time watching wrestling, Jeff Hardy and Elias competed in a “guitar on a pole” match. I’m extremely pro-putting things on poles, but this feud is so lukewarm that not even multiple instruments or poles could save it. There’s literally footage that absolves Jeff of running Elias over! Is his defense that he just doesn’t watch the product? Understandable, but come on. Anyway, this at least didn’t overstay it’s welcome. Elias started out hot, keeping Jeff down until Hardy knocked him over on the outside. He started up towards the guitar, climbing as slowly as humanly possible. Elias threw a stool to toss Hardy off, but Jeff came back with a Twist of Fate. He went back for the guitar as Elias grabbed at his legs. Hardy grabbed the guitar and cracked it over Elias’ back, hopefully ending this for good and sending both men into better things. 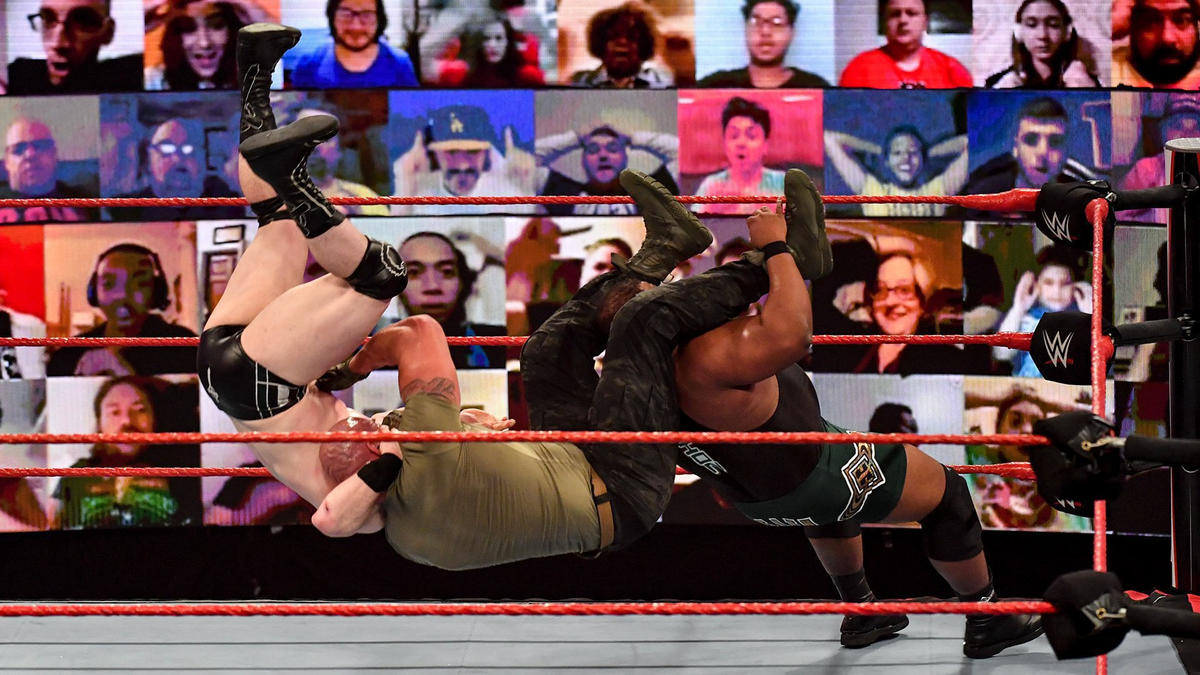 It wouldn’t be the road to Survivor Series without totally unnecessary infighting. AJ Styles attempted to declare himself the leader of Team Raw, backed up by his new buddy Jordan Omogbehin. Jordan has one year and almost two clear feet on me, so it’s pretty funny to watch him stand silently behind Styles and rock a turtleneck like nobody’s business. AJ introduced the rest of the team so far -Sheamus and Keith Lee- who weren’t too excited to fall in line behind a man who defended flat earth theory on a streaming talk show. Braun Strowman came out to join the party and elect himself to the team. Keith rightfully pointed out that Strowman had to qualify for the team, leading to a triple threat between him, Lee, and Sheamus. Styles joined on commentary, where everyone was very surprised and concerned that he now has a friend. Lee hit a huge dive over the ropes, wiping out Sheamus and Strowman. Braun attempted a double chokeslam on the outside, but Sheamus and Keith teamed up to throw the steel stairs into his face. Sheamus tried to choke Lee out on the outside, and Strowman broke it up by sending all three of them through the barricade. Strowman tried to suplex Sheamus off the turnbuckle, but Lee came in and sent everyone to the ground. A running power slam to Sheamus got Strowman the win, putting him on the Raw team, much to AJ’s delight. The team looked reconciled for a moment, before Sheamus delivered a Brogue Kick to Strowman. Lee knocked Sheamus to the mat, and Styles retaliated by dropkicking Lee from the ring, then complaining that he wished they all could get along like they used to. 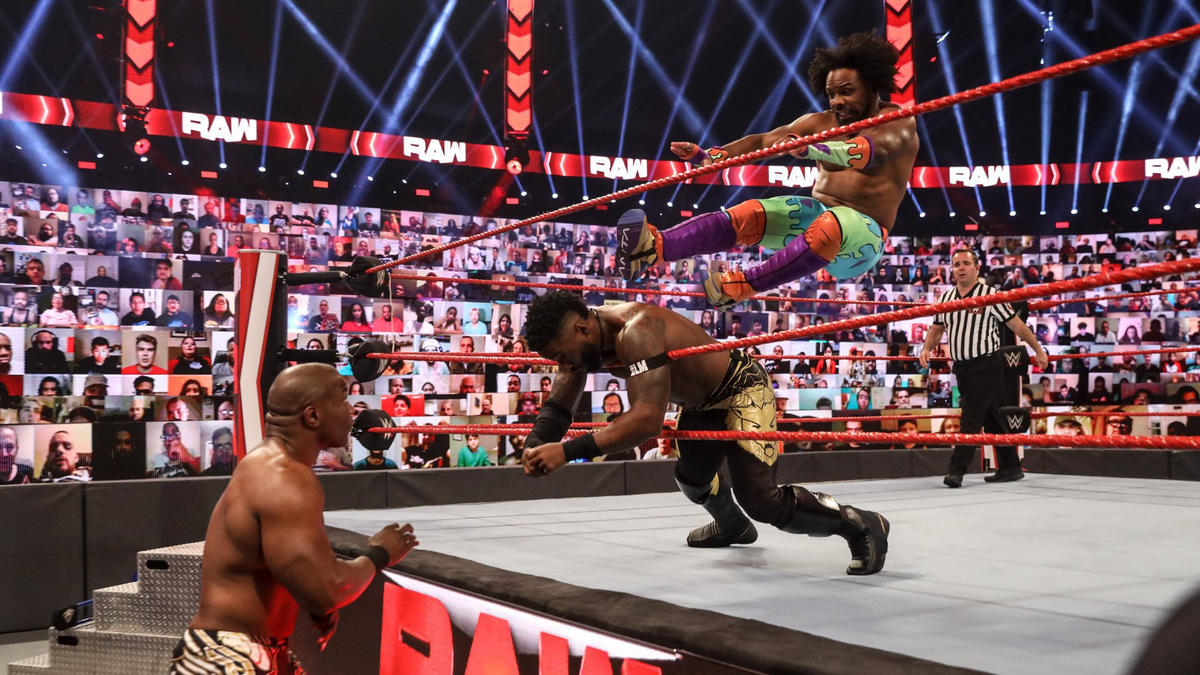 During the MVP lounge, The Hurt Business expressed their interest in the Raw tag titles. The New Day interrupted to show off just how good the red straps looked around their waist, leading to the two teams facing off. This match was just plain good. The Hurt Business has been getting even better week by week (at least, when they’re not overwhelmed by teenage anarchists). MVP was excellent on commentary, and Benjamin and Alexander meshed well as teammates. Kingston and Woods, as always, exuded chemistry and charisma in just about anything they did. They controlled Alexander early on, but got knocked down with a big boot from Benjamin. Woods made a comeback with an enzuigiri, allowing Kingston to hit Cedric with a Boom Drop. The New Day may have had the advantage with 5 title runs under their rainbow belts, but The Hurt Business managed to best the duo with sudden tag to bring in Benjamin, who followed the Neuralyzer with Paydirt to get the win. I’m really looking forward to seeing more of this feud post Survivor Series. 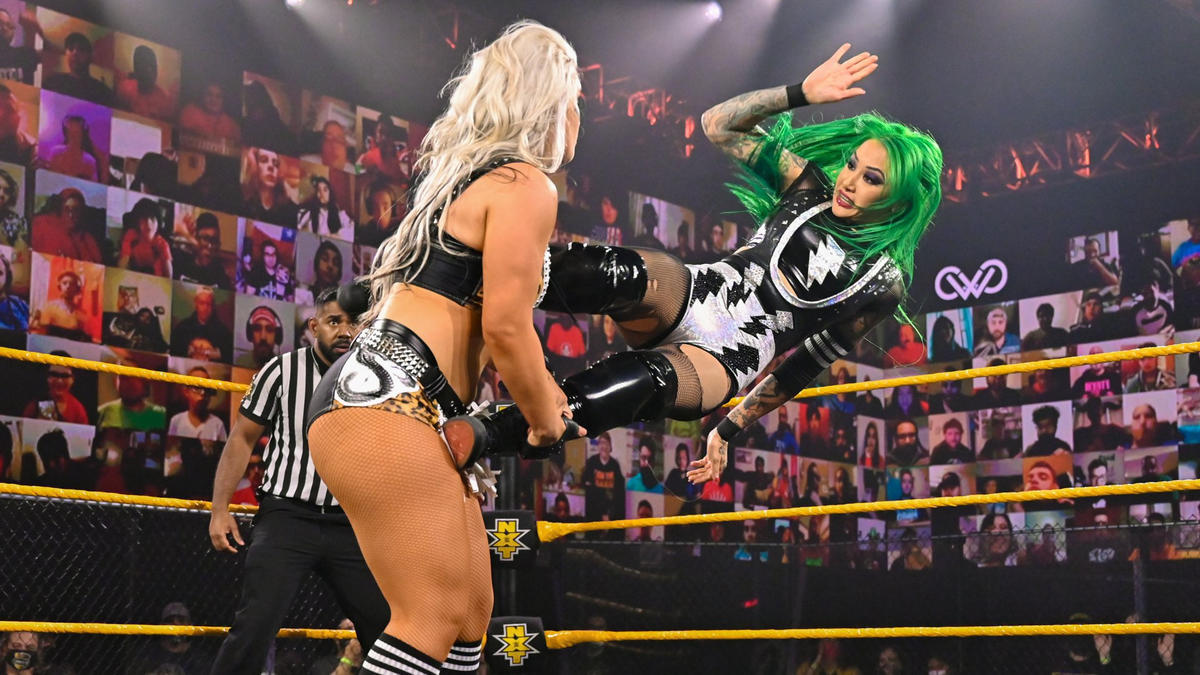 Shotzi Blackheart was game to face former NXT UK champ Toni Storm, after accusing Storm of stealing the tank she rides to the ring with, which honestly seems like a hard thing to lose. Fueled by the theft accusations, Toni came out strong, grounding Shotzi to the mat. Shotzi battled back with a facebuster, but Storm wasn’t down for long. She countered an enzuigiri into a series of German duplexes, and Blackheart kicked out again. Shotzi hit a huge DDT on the apron, sending both wrestlers to the ground. Candice LeRae interrupted this excellent match to let Shotzi know she found her tank sitting in the middle of a Florida highway- but whoever could have put it there? Toni took advantage and rolled Shotzi up for the win, and Candice took the opportunity to get behind the wheel of a giant Hummer and run over the tank. That tank is larger than your average Barbie Cadillac, so I have to imagine it left some damage on the undercarriage of Ghostface’s car. He’s a real friend for backing the Garganos anyway. 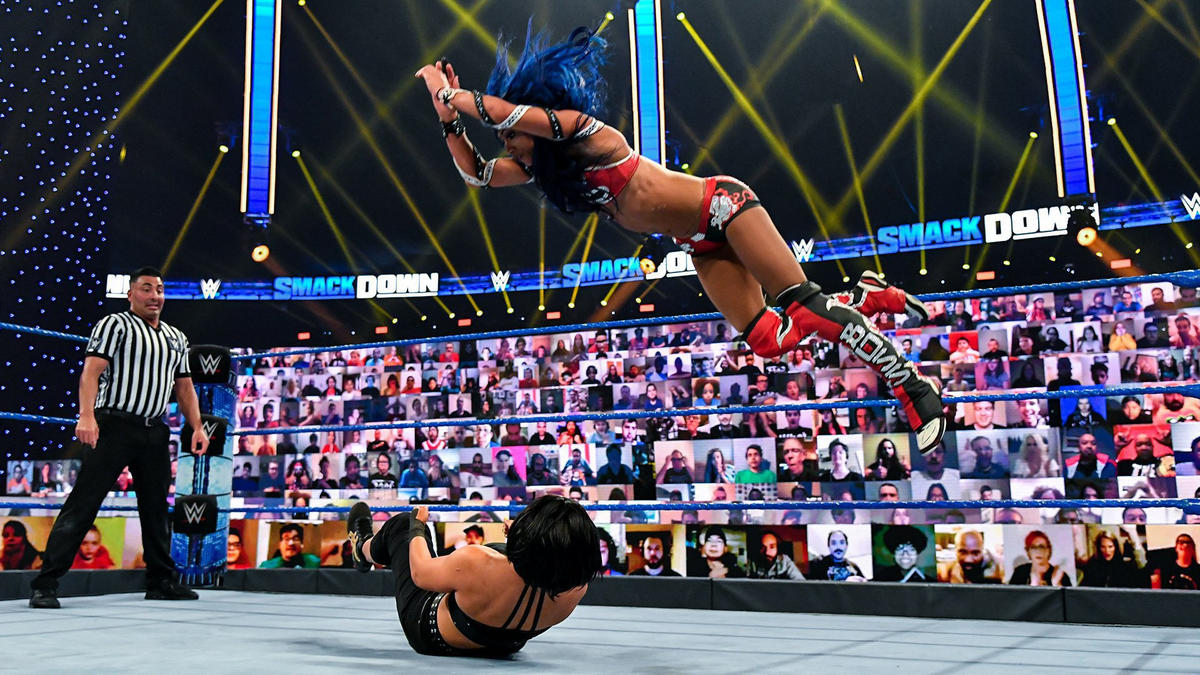 The era of short reigns for Banks is hopefully long over, as she toppled Bayley yet again to hold onto her title. Unsurprisingly, this match was great, with the chemistry between both women still carrying the story. There’s a vicious history at play, and while it wasn’t Hell in a Cell, there was still some real physicality to this match as well. Banks hit the double knees right on Bayley’s neck early on, sending her headfirst into the turnbuckle. Bayley hit a Bayley to Belly and an elbow drop, but Sasha kicked out of both. Bayley even got her former friend in the Banks Statement, yet Sasha was able to escape. She got her own Banks Statement locked in, forcing Bayley to tap and giving her a very solid title defense. After the match, she was attacked on the ramp by Carmella (the woman from the mysterious fur and feet vignettes) who laid Sasha out with a super kick. I’ve always enjoyed Carmella, and she’s great on the mic, but I can’t say I’m too thrilled to see her challenge for the title just yet. I also don’t really get her new gimmick, unless it’s just “blonde.” Still, it was nice to get another fun match out of Banks and Bayley before shutting that door (for now). 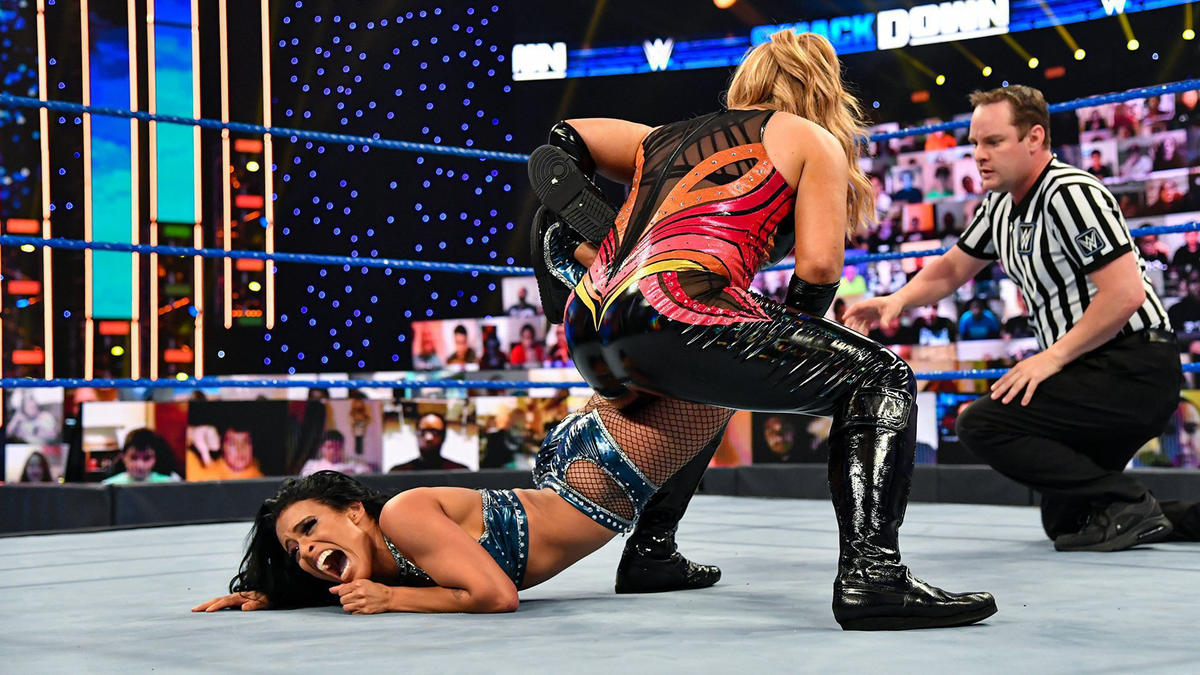 New season new me; Ruby Riott debuted a returning short haircut in a triple threat qualifying match against Natalya and Zelina Vega. We started out with a series of roll ups from each competitor, but everyone got out in time. Natalya went for a submission on Riott, but Zelina ran in to try and sneak a pin under the surfboard, forcing Natalya to break it. Ruby missed a senton off the turnbuckle, and again Zelina took advantage, knocking Natalya out of the sharpshooter and focusing on Riott. Ruby rolled out of the ring as Natalya came back and taking it to Vega. Returning to the pixie cut must have boosted her game, as Riott snuck back in behind Natalya while the Queen of Harts was locking in the sharpshooter on Vega. Ruby got Vega in an armbar as well, and Natalya let up just before Vega tapped out. This sends her to join Bianca Belair on the SmackDown women’s survivor series team, which is a concept I’m very excited about. This match probably could have been longer than two and a half minutes, but it was a somewhat surprising result all the same. 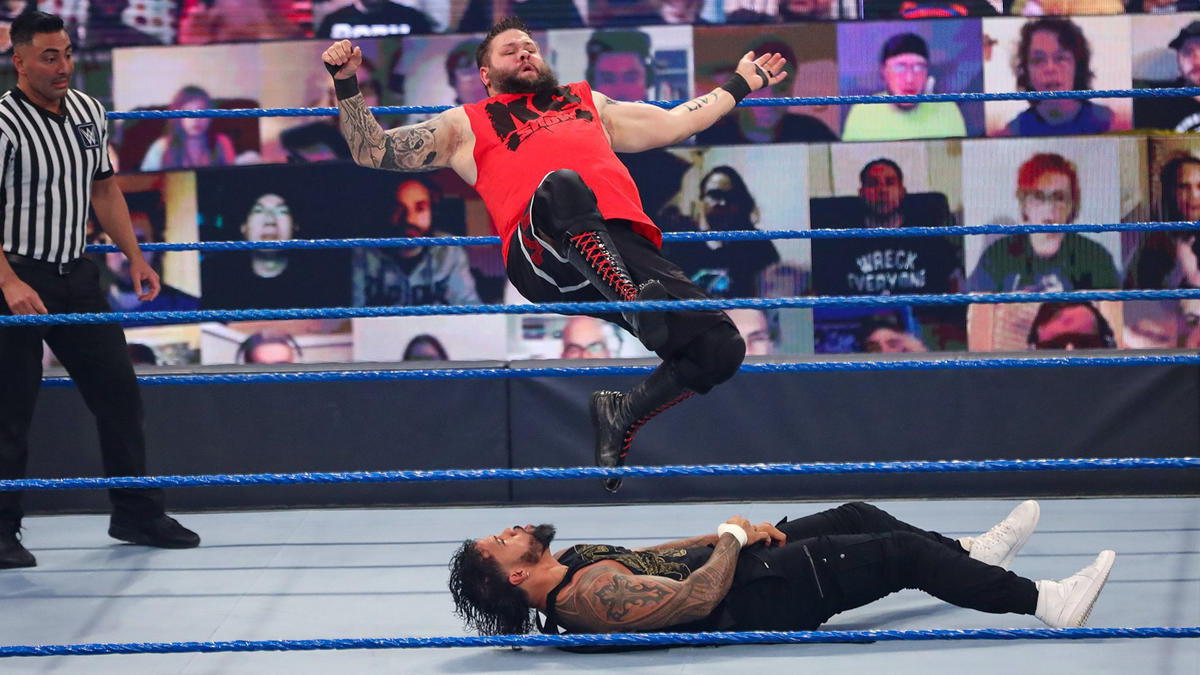 Jey Uso was just trying to enjoy a nice cup of joe during these trying times when Kevin Owens interrupted his peace and quiet. Uso got mad that Owens likened him to a trust fund intern when he implied Jey should be getting coffee for Reigns, although in this scenario, no one should be drinking coffee past 8 pm, especially before a wrestling match. While Owens was able to calm Uso down, Reigns felt the coffee jokes were just going a little too far. Later in the night, he told Uso that he should have taught Owens a lesson for disrespecting the family, and scheduled a match between the two of them. KO was on top early on, until Paul Heyman came down to ringside. Emboldened by the presence of the ECW legend, Uso made a comeback, hitting a super kick and grinding Owens down into the mat. Kevin wasn’t going down easy, delivering a super kick of his own. He got a huge senton on Uso, but Jey just managed to kick out. Jey got caught in a pop up powerbomb, and got his foot on the rope to break the pin. As Reigns music hit to distract the ref, Uso hit a low blow on Owens and followed with a superkick and an Uso Splash to score a win and redeem coffee privileges for his family. Uso’s journey over the past month has been fantastic; he’s beating guys like Owens and Daniel Bryan, an inconceivable thought just six months ago. His story with Reigns remains gripping, as Roman urges his cousin to crawl further towards the edge. 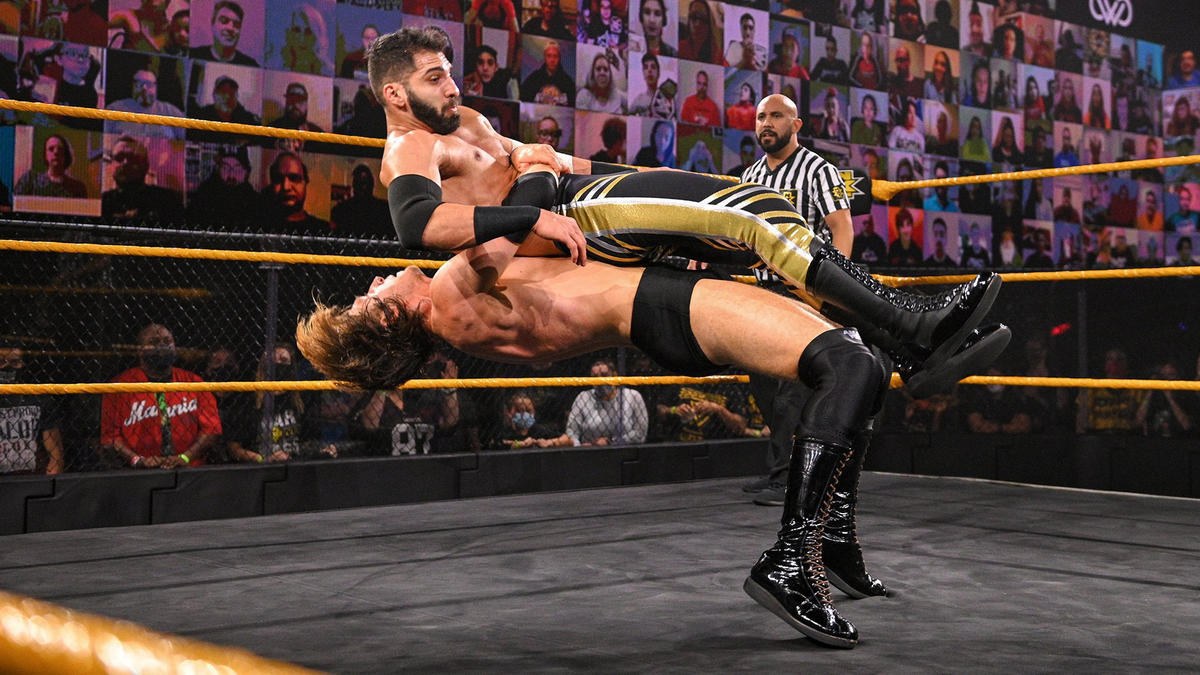 Curt Stallion came back to 205 to team with a rebranded Anthony Greene, who now goes by August Grey, because some colors sell and some don’t. The newcomers faced 205 OG’s and local nasty boys Tony Nese and Ariya Daivari, following Stallion’s victory over Daivari last week. Grey and Stallion double teamed Nese early on, but Daivari tagged in and cleared the newbies out. Assisted by an elbow from Nese, Daivari hit a neckbreaker to almost get the pin on Stallion. The Texan battled back to his corner, and it was Grey’s turn to get knocked around. Nese hit him with a springboard moonsault, but Grey just kicked out. They exchanged hits in the center of the ring, with Nese knocking Grey to the mat. Stallion broke up a Dudebuster from Nese on Grey, prompting him and Daivari to get into it on the outside. Daivari grabbed his gold chains from ringside and took the opportunity to nail Grey in the face, letting Nese get the win with a roll up.