Since WWE has decided to turn out PPVs like wrestling shows are going out of style, this week was devoted to building storylines for Payback in a tight five hours. While we were treated to some unexpected returns, we also saw a lot of rematches and not nearly enough women’s wrestling, so I’d call it a lukewarm week. Here’s your rundown: 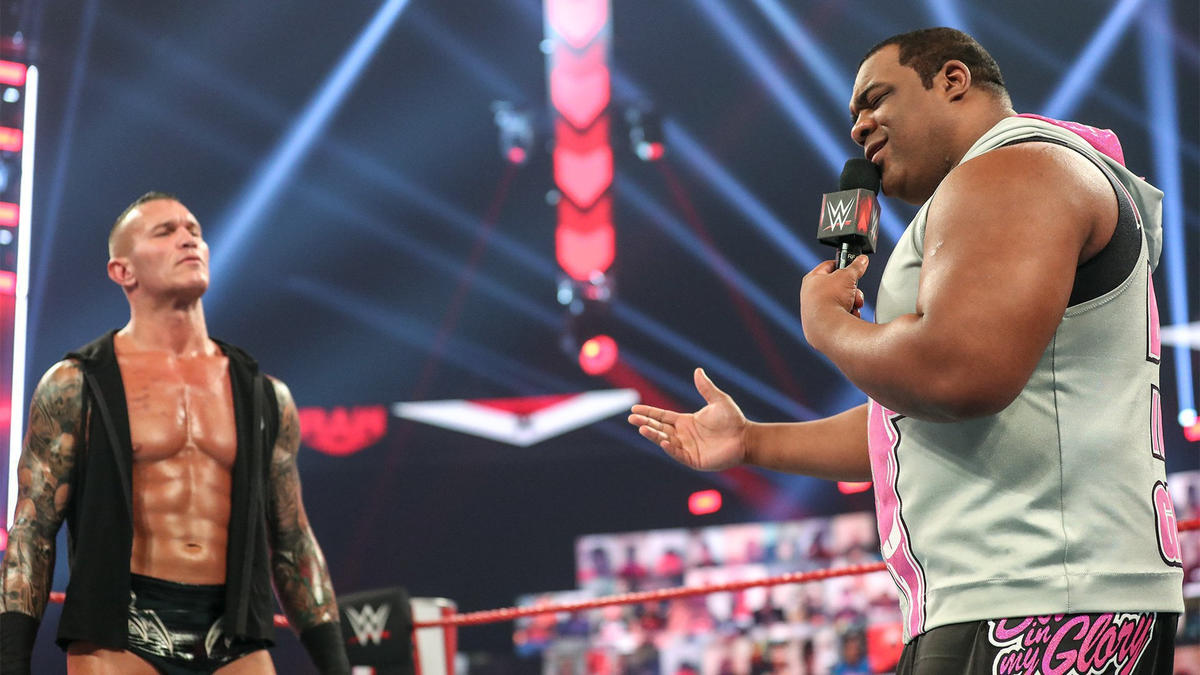 After unjustly losing his NXT championship to the magician from your nephew’s birthday party, Keith Lee made his official main roster debut on Monday night. During the show, Randy Orton delivered two punts to Drew McIntyre in the course of an hour as a thank you for being kind enough to offer him a rematch for the WWE title. While warming up his foot for punt #3 later in the night, Orton came out to cut a promo singing his own praises for more than a hot minute, so Keith interrupted and saved us all the headache. His music was bad and his new gear was suspect, but it’s Keith Lee, so the virtual crowd still went wild. Lee offered Orton the chance to face him that night, but the Viper said he wasn’t interested yet, and left the ring. We got to see a brief run through of the match later in the night, but it was interrupted by Drew McIntyre. Orton and Lee are now facing off again at Payback, and the full match should be fantastic. Lee getting a spot against somebody like Orton is hopefully a sign of how highly the company thinks of him. 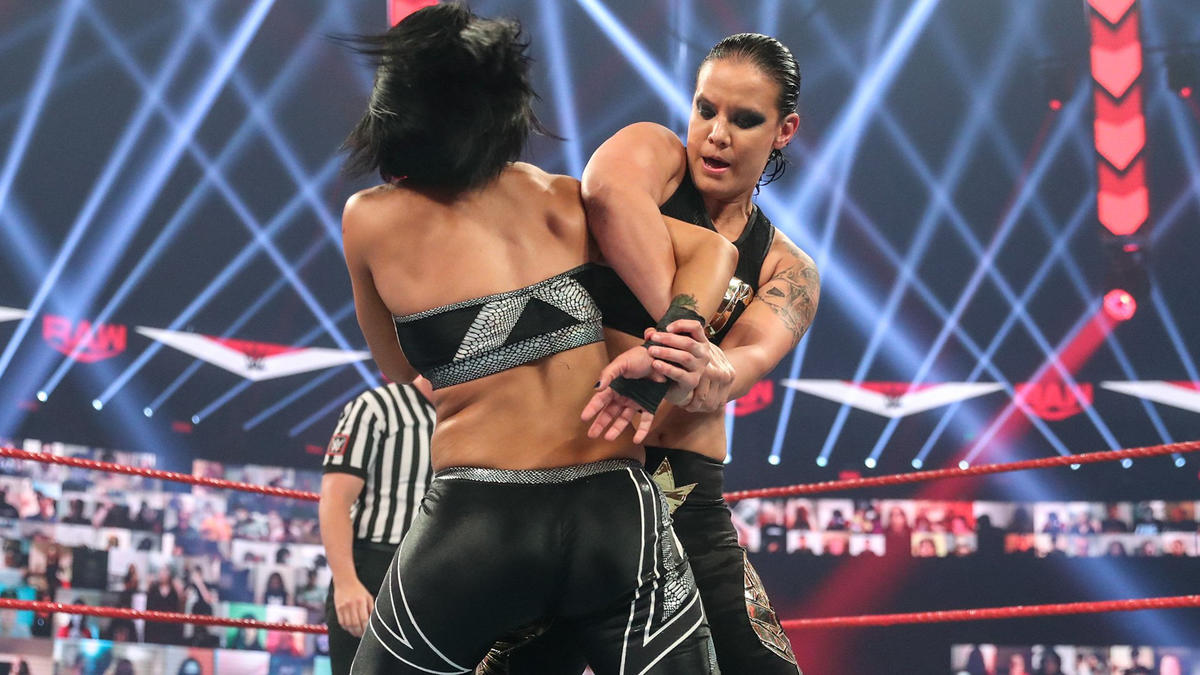 Enemy of My New Coworker

Nia Jax sent Pat Buck a fruit basket for tossing him around like a toy last month, so now she’s back at work like nothing happened. This is a good example for how WWE treats HR issues out of kayfabe as well. Shayna Baszler showed up to suggest maybe long term treatment and having codes of conduct in place would be to more helpful than sweeping a situation under the rug, before heading off to her match against Bayley. This should have rocked, but they barely got things started before Jax ran in to go after Baszler. Banks and Bayley laughed a little too loud at this turn of events, so Baszler and Jax instead put aside their differences and turned their attention the Golden Role Models. They ran Banks and Bayley off, giving us yet another unsatisfying team up from two singles stars who have no reason to be in a tag team. I’m sure it’ll be fine, because I’d watch Shayna Baszler choke out a piece of paper on PPV, but there’s not a lot of interest behind this new pairing. 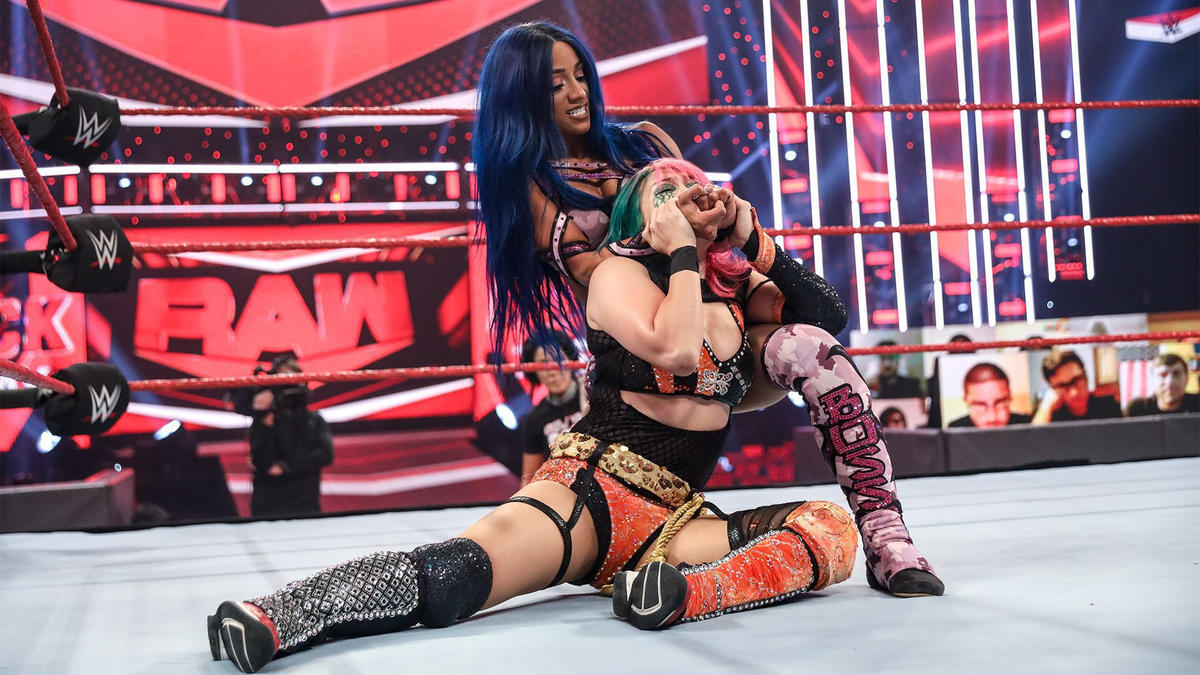 I think lumberjack matches are great in theory, but sometimes weirdly difficult to pull off in practice. While it’s  fun to watch half a dozen people in full gear stand outside the ring and make menacing faces, it can leave an already shortened match feeling over bloated. We got a great dose of bacting from the women’s division this week on Raw, as Asuka and Sasha Banks has a rematch for the title. Unfortunately, this wasn’t anywhere near the quality of their pay per view matches, mostly due to interference from Bayley. The SmackDown Women’s champ hit Asuka with a cheap shot early on to give Sasha the edge, but The Empress bounced back. At one point, Banks threw Asuka to the outside and tried to hit a Meteora, but accidentally took out the Riott Squad instead. Asuka tried to stop Bayley from getting involved again, so the former hugging machine hid behind as many women as she could find scattered at ringside. Back in the ring, Bayley tried to slide Sasha a chair, but Shayna Baszler wouldn’t stand for it. Asuka got Banks in the Asuka Lock and forced her to tap, retaining her championship. Despite the incredible skill of both wrestlers, this match didn’t take off like it should have. Too much involvement from the outside really dragged it down; save yourself the trouble and just rewatch their SummerSlam match. 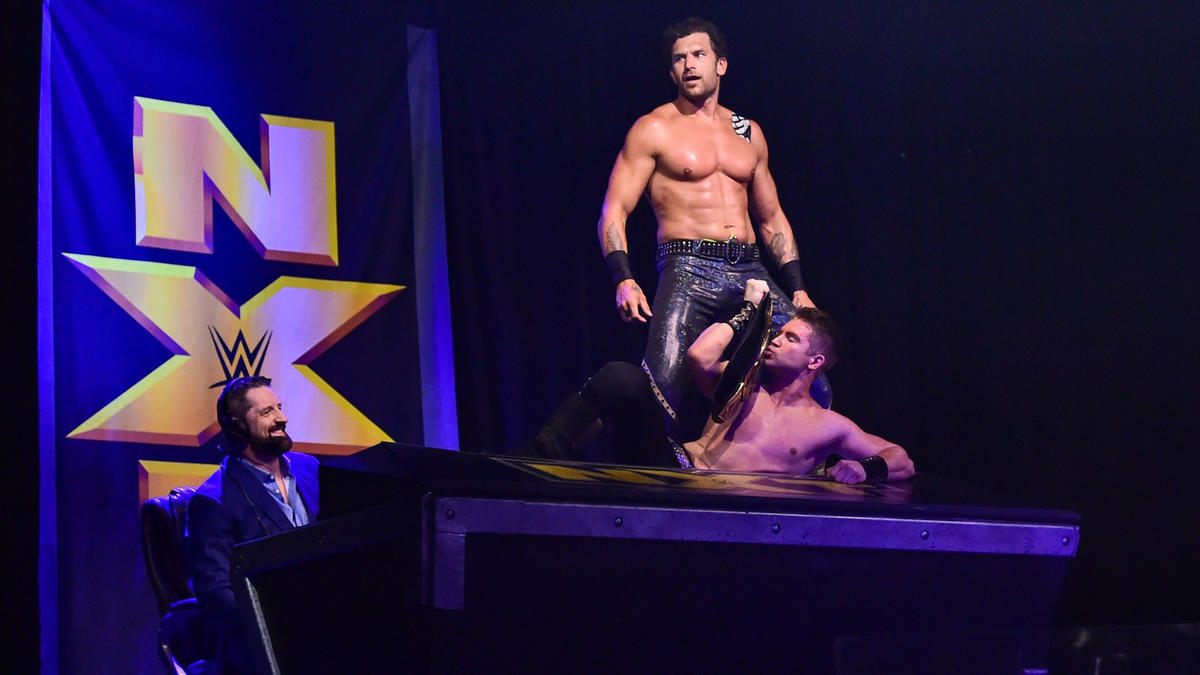 After dethroning Keith Lee last week, Karrion Kross unfortunately had to relinquish his newly won NXT Championship due to a shoulder injury. This is obviously a huge bummer for Kross, but to look on the bright side, it could lead to some exciting changes in the NXT title picture. Maybe we could get some totally new wrestlers challenging. People who hadn’t even had title shots before, let alone championship reigns-

In slightly more interesting news, NXT crowned new tag team champions in Breezango this week. They faced Imperium after winning the #1 contenders spot at TakeOver, and managed to claim their first WWE titles in a very fun match. Breeze and Fandango went after Imperium before the match started, but Barthel and Aichner came back strong with some double maneuvers. The two teams seemed very evenly matched throughout, with Imperium almost getting the win with several near falls. The finish here was Breeze hitting a superkick, followed by a leg drop from Fandango, and finally the best thing about WWE in 2017 struck gold. While long overdue for a title run, Breezango have managed to remain an entertaining team and a relevant part of the tag scene. Moving them to NXT certainly seemed to revive the duo. Hopefully their reign as tag champs will give us some great match-ups and some bold new entrance costumes. I’m thinking… astronauts? 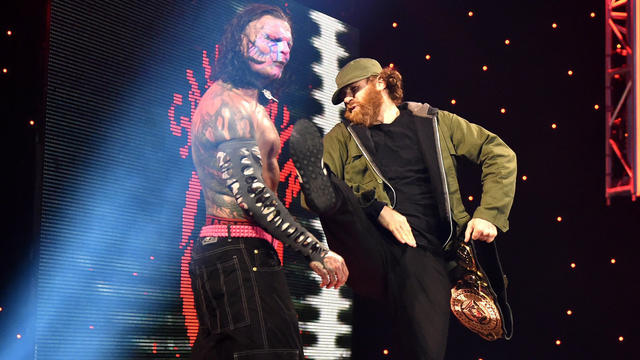 Your favorite Letterbox critic is back! Sami Zayn made a very welcome return to SmackDown on Friday night, interrupting Jeff Hardy following his excellent match with Nakamura. Zayn was forced to relinquish the Intercontinental Championship months ago when he elected not to wrestle on account of the global viral pandemic that was easily transmitted by being super close to people. Zayn brought his title belt back to SmackDown and claimed he never lost it, making Hardy a fake champion. He landed a Helluva Kick on Hardy to drive him his point, then skanked backstage. Later in the show, he approached Cesaro and Nakamura to claim his disappearance was meant to bring them closer as a team, which had evidently worked. It took me a minute to recall that Zayn had been their manager, but most of that time was spent in that awful feud with Strowman, so I’m gonna try to repress that memory again. Cesaro asked him to leave, because he and Shinsuke were probably coordinating outfits for next week and a little newsboy cap really wouldn’t fit in. Zayn reluctantly left to go eat lunch alone in the bathroom stall. SmackDown ran its usual two hours, and we didn’t get to see any women doing actual wrestling. Someone’s been taking notes from Dynamite! We got a promo from Bayley that was essentially a bunch of backdoor digs at Sasha, followed by Shayna Baszler and Nia Jax asserting they actually hated each other too, so maybe all four women have something in common. I still don’t get why Baszler and Jax are a tag team now, but hopefully it’s just a one off thing. Banks and Bayley’s friendship remains on edge after Sasha lost her Raw Women’s title, so odds are we’ll see her take those cowprint pants and kick Bayley’s face in soon.

We also saw Alexa Bliss do her best That’s So Raven when Nikki Cross brought up The Fiend. Cross found a single dreadlock in Bliss’ hair, and proceeded to gently remind her friend that it really wasn’t okay for her to try and rock that hairstyle. Just the mention of the Spirit Halloween mascot made Alexa stare blankly into space for a long moment, trying to figure out how magnets worked, before she snapped and smashed Nikki’s coffee cup, declaring their friendship over. Alexa’s days of softly brushing blood and Ramblin’ Rabbit fur from The Fiend’s face aren’t over, it seems. 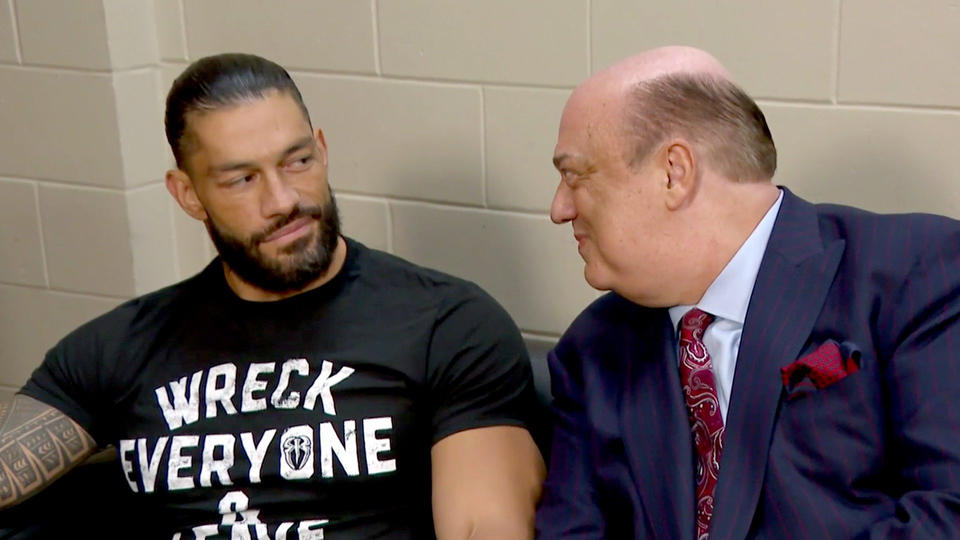 Friday night opened with Adam Pearce being told to get all the signatures for the Universal Title match contract. This may sound like the worst side quest imaginable, but it was an interesting choice to have a through-line on SmackDown connecting several different segments. First, Pearce played his best mailman on Firefly Funhouse to get Wyatt’s signature. Then, he arraigned for Drew Gulak get absolutely crushed by Strowman to ensure the Monster signed the contract too. So much for 205 Love. Finally, he was allowed into Roman Reigns’ dressing room, only to find Roman had already enlisted a different kind of scrapping daddy to give him a hand- Paul Heyman. Reigns even dropped a Heyman catchphrase to solidify their friendship, promising his victory on Sunday “wasn’t a prediction, it was a spoiler.” Putting Heyman with Reigns right now certainly feels unexpected, as the “Roman needs a mouthpiece” crew seems to have died out around 2016. But there’s a lot of potential in this pairing, especially when we eventually get Reigns and Lesnar again down the line. 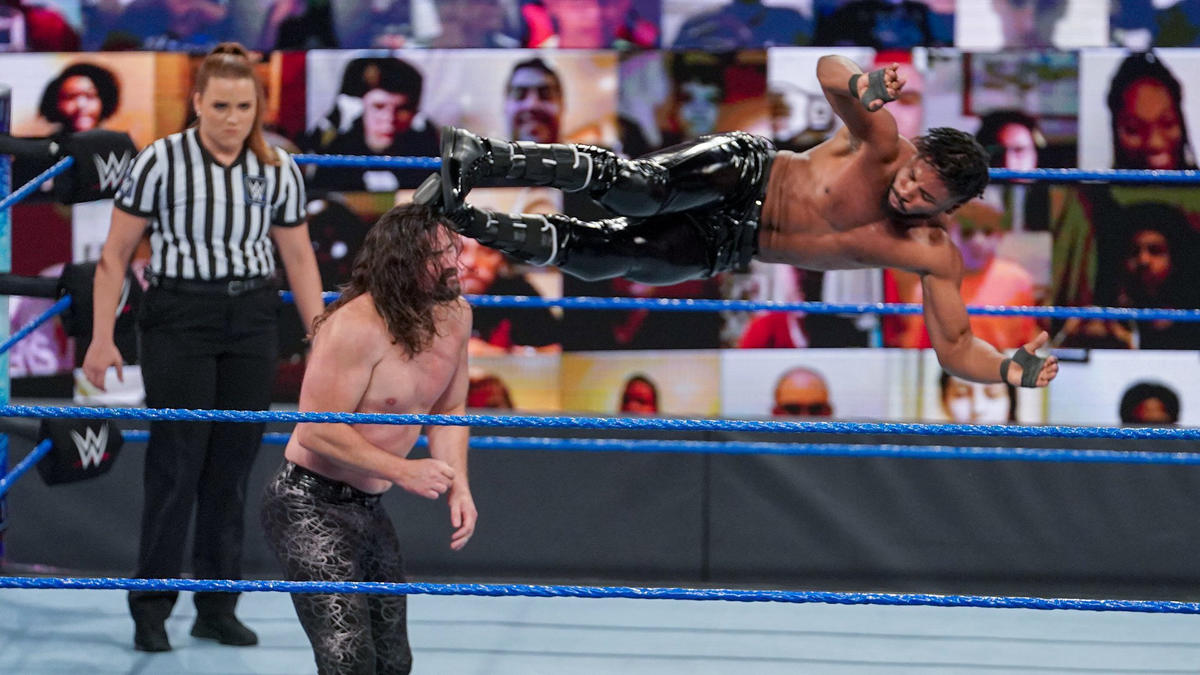 205 Live Denied a Crumb of Respect, Yet Again

Santos Escobar retained his Cruiserweight Championship against Isaiah Swerve Scott on this week’s NXT, because why put the cruiser belt on the cruiser show. That match was very good, with Escobar winning after a headbutt in a presumably gimmicked lucha mask that knocked Swerve out cold, and some continuation of Legado del Fantasma vs Breezango, as the new tag champs ran Mendoza and Wilde from ringside after attempting to interfere. 205 Live didn’t feature the CW champ at all, because Triple H has probably forgotten it exists again, but we did get the return of Brian Kendrick, so that’s… Something. Kendrick was solid as always when he faced Tehuti Miles, who unfortunately ate another loss at the hands of the veteran. Kendrick had a counter for almost anything Miles attempted until he came back with a great dropkick that earned a two count. Miles teased Kendrick about “teaching” him, which is a frightening concept when you remember Kendrick’s weird ass conspiracy videos, but Brian got a quick roll up for the win.