With Clash of Champions one week away, WWE slowly spins it’s wheels with rematches, muddled finishes, and more of that terrible new Keith Lee theme. 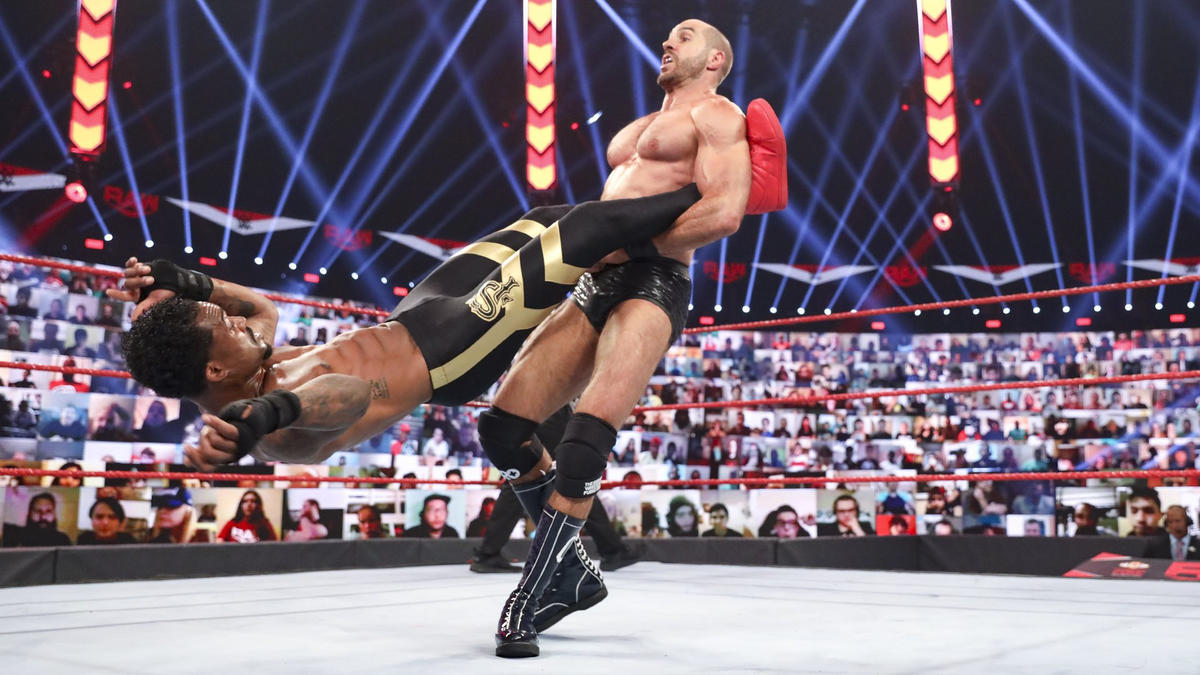 This was a really fun tag match that almost made me forget it was only happening because neither brand can properly build teams. Cesaro started off hot here, hitting Dawkins with a huge uppercut. After the Profits regained their rooting, Ford went for a splash, but Nakamura got his knees up. The heels got the swing into a Kinshasa, but Dawkins broke up the pin for this team. The mix of styles here really worked; Cesaro and Nakamura leaned into their hard hitting moves, while we got some athleticism from the Street Profits. Dawkins sidestepped a knee, sending Shinsuke crashing into the turnbuckle. He got the blind tag off Ford, then landed a splash on Cesaro to pick up the win. The ending felt abrupt- I could have seen a bit more of these two groups going at it. It seems likely we’ll get a rematch at Clash of Champions, so maybe they wanted to save some stuff til then. The Street Profits winning is fine, but it would be better if they had any kind of competition on their brand. 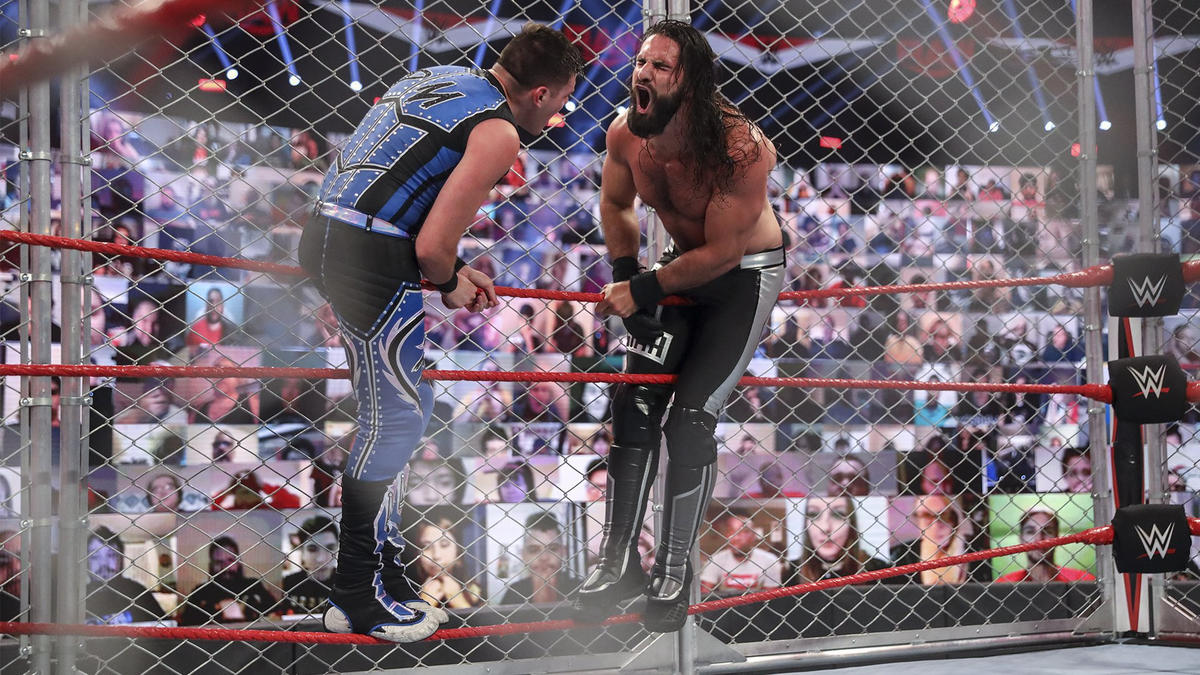 Just like my depression, the Seth Rollins/Mysterio family feud refuses to go away for longer than 6 days. This week was a cage fight between Rollins and Dominik, because we’re quickly running out of stipulations these two haven’t tried yet. Next week we’ll get the pig pen on the highway match I’ve always dreamed of seeing Seth in. Before the cage match, Rollins laid into Murphy about rocking the same haircut for 8 years and getting his ass beat last week. He slapped Murphy around and told him to stay backstage for the match, because his loser vibes were contagious. Lucky for Seth, Murphy listens about as well as any man in my life, because he ran out and provided Rollins with a kendo stick early on. Not to be out-cheated, Rey gave Dominik a kendo stick too. Dominik got the upper hand with some kendo shots and was almost making it out of the cage when Murphy interfered again. He went after Rey, who was trying to pull his son from the ten foot metal cage his actions had placed him in, and but accidentally shut the door on Rollins instead. Rollins and Mysterio went at it some more, but the Messiah landed double stomps to put Dominik away. Post match, Rollins again went after Murphy, slamming him into the cage door to teach him about always double checking before he locks up the garage for the night. After the beat down, Rey’s daughter Aalyah checked on Murphy, because unlike most babyfaces, she actually still had a shred of compassion and feels bad watching a grown man get tossed around like a sack of potatoes. Murphy’s turn on Rollins feels imminent, but him joining forces with Rey and Dominik could be interesting. 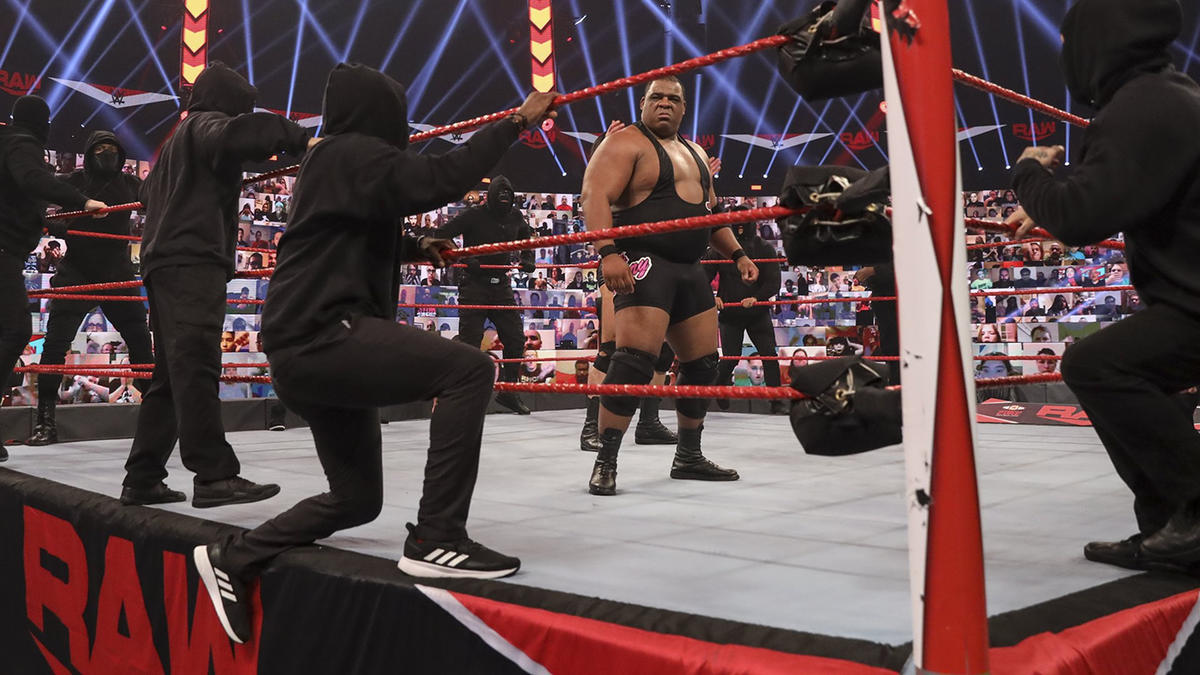 Raw was advertised as “in your face,” but there was little to no 3D effects in place, which was kind of a bummer. Monday night finished up with Keith Lee vs Drew McIntyte, after we found out that Randy Orton may not be cleared to compete at Clash of Champions. This meant if Lee won in the main event, he would have a shot at the WWE Championship, and the world would start to get back on track. McIntyre had requested an Ambulance Match, and nothing sounds better than a smug Keith Lee driving an ambulance down the Orlando freeway. The match between the two was very good; if you like big men looking really miffed about stuff all the time, this is your kind of feud. Lee went after McIntyre’s injured jaw as a result of all the punts to the head, but Drew fired back with some power moves. The two were very rudely interrupted by your favorite forgettable gang of outlaws- Retribution. The hoodie fans knocked down and beat both men, but McIntyre and Lee were saved by The Hurt Business, for some reason. No one else on Raw seemed to give half a damn, but The Hurt Business went after Retribution, while Lee and McIntyre hit matching dives to wipe out the ruffians. This was mixed, honestly; Lee is surely going to end up in the match with Orton/McIntyre, and although I can’t see him winning, it should be a fun time. Retribution continues to exist, despite the general blandness of everything WWE has had them do. There were a few weeks where I’d hoped they had just scrapped the angle, but they’re really coming back with the “”anarchy”” full throttle here. Also, why is The Hurt Business the only group out here defending two babyfaces? I know Retribution called them out earlier in the night, but nobody else was watching the monitor? Busy day in catering. 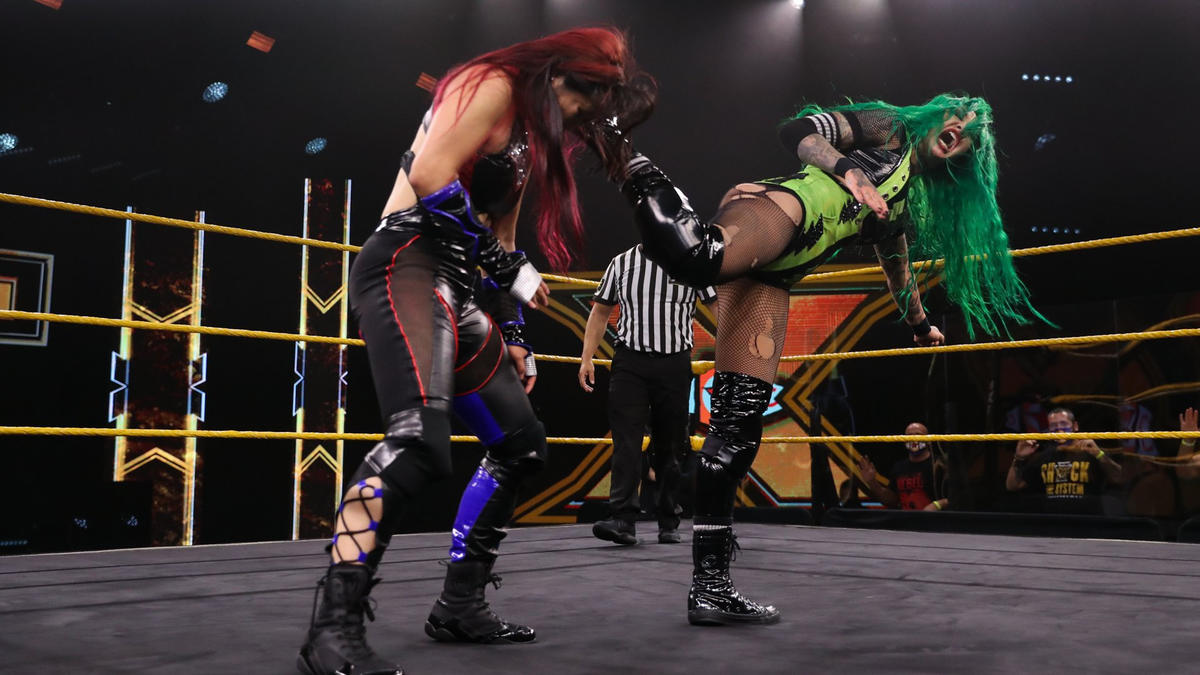 Bold of NXT to open with the best WWE match of the entire week, but that’s their call. Shotzi Blackheart took on NXT Women’s champion Io Shirai in a fantastic match that really showcased just what Blackheart can bring to NXT. While she’s spent the last couple of weeks running over Robert Stone with a tank, Shotzi has a lot of intensity in the ring, and she delivered the fight to Shirai. I was a little surprised how evenly matched the two seemed, with Blackheart holding her own in counters to Shirai, but it’s great to see her get to shine like this. Shotzi managed to kick out of Io’s toughest moves, including the 619 and a huge drop kick, but the champ wasn’t deterred. She hit a big German suplex on the apron and followed up with a moonsault to get the win. This was an opportunity to put Blackheart over as an upcoming player, and it really worked. Shirai’s victory makes sense, and I’m certainly looking forward to seeing them wrestle again in the near future, preferably for the title. 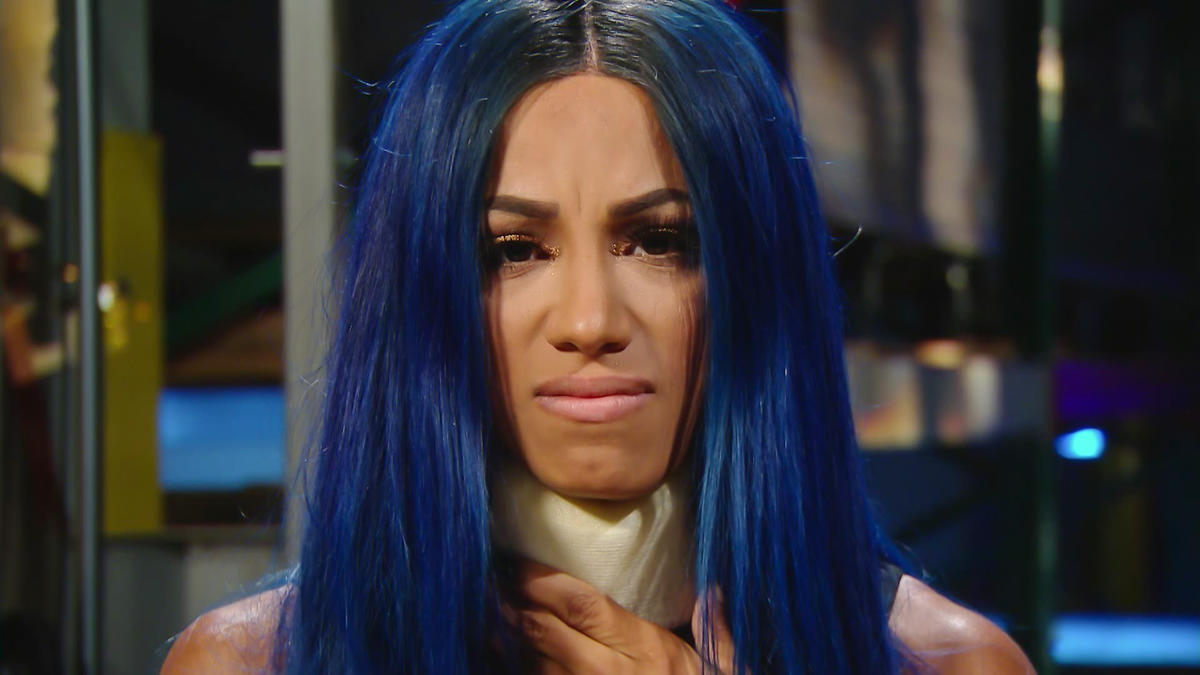 Bayley had such a fun time taking out Sasha’s neck last week that she came back for round two. On Friday, an injured Sasha cut a backstage promo claiming that Bayley was too stupid to realize she was nothing without the Boss, and that she would be challenging for the SmackDown title soon. She reminisced a little about their friendship since NXT, but even good things come to an end at the hands of a steel chair. Bayley then ambushed the star of The Mandalorian season two from behind with some more chair shots, taking off Banks’ neck brace to try yet another murder on live television. Security pushed her off, but Banks’ bones got the message. Hardcore Bayley has been a fun change from the cowardly, obnoxious heel, and this build works well for her and Sasha. When Banks gets her revenge, it’s going to feel very sweet indeed. 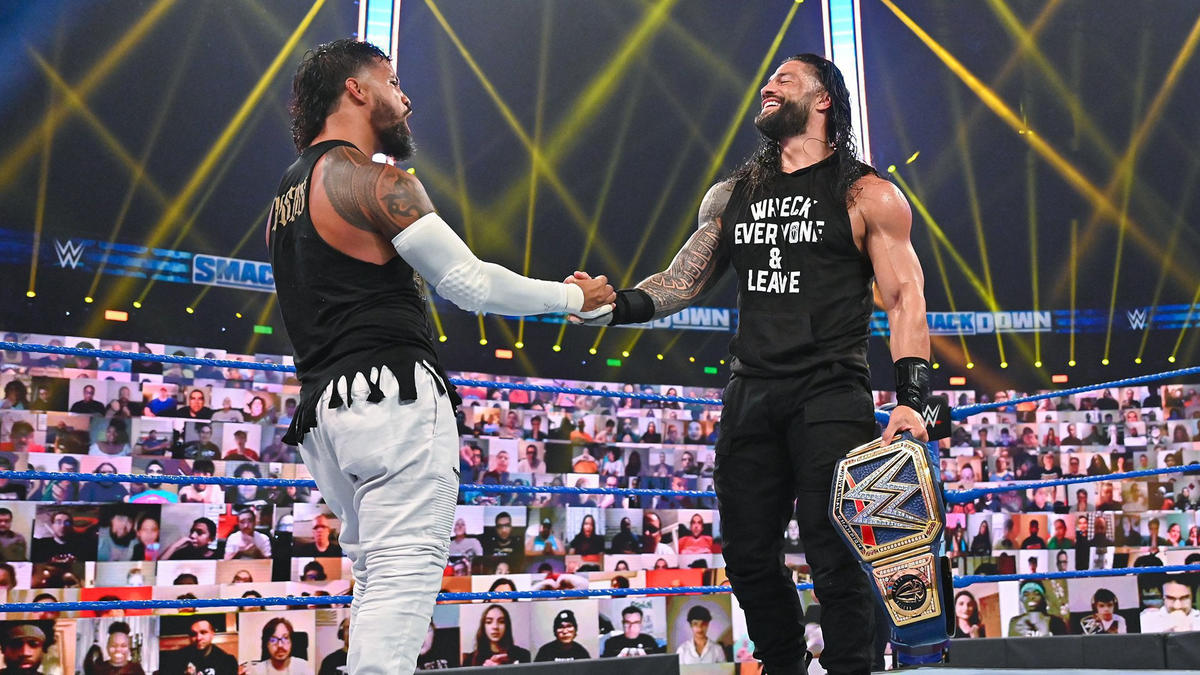 Tolstoy opened Anna Karenina with “Happy families are all alike; every unhappy family is unhappy in its own way.” Knowing how Anna Karenina concludes, I’m sure he was referring to a situation in which you are WWE Champion, your cousin would like you to not be WWE Champion, and you’ve got to beat his ass for it. The family drama ramped up between Roman Reigns and Jey Uso this week, with the two once again teaming to take on Sheamus and King Corbin. This is kind of a muddled heel team, because Corbin is in the Middle Ages and Sheamus just got shot by Roxie Hart in 1926, but they’re making it work. They took out Roman and double teamed Jey for a while, but he kicked out after a powerbomb through the table. Uso and Reigns worked together this week, unlike Roman’s heel tactics last Friday, with Jey hitting Corbin with the belt as a lead in to a spear. To regain the glory Reigns stole last week, Uso hit a sudden splash and stole the pin. He teased celebrating with the title, before explaining he was simply goofing, and instead hugged it out with his cousin. Reigns laughed along, but as Uso walked off, his whole expression changed, and he stared daggers into his challenger. Reigns’ work here has been great; he’s really leaning into this full heel persona, and it’s working. Him playing nice with Jey, only to plot a familial assassination the second his back was turned, really marks a notably different Big Dog. 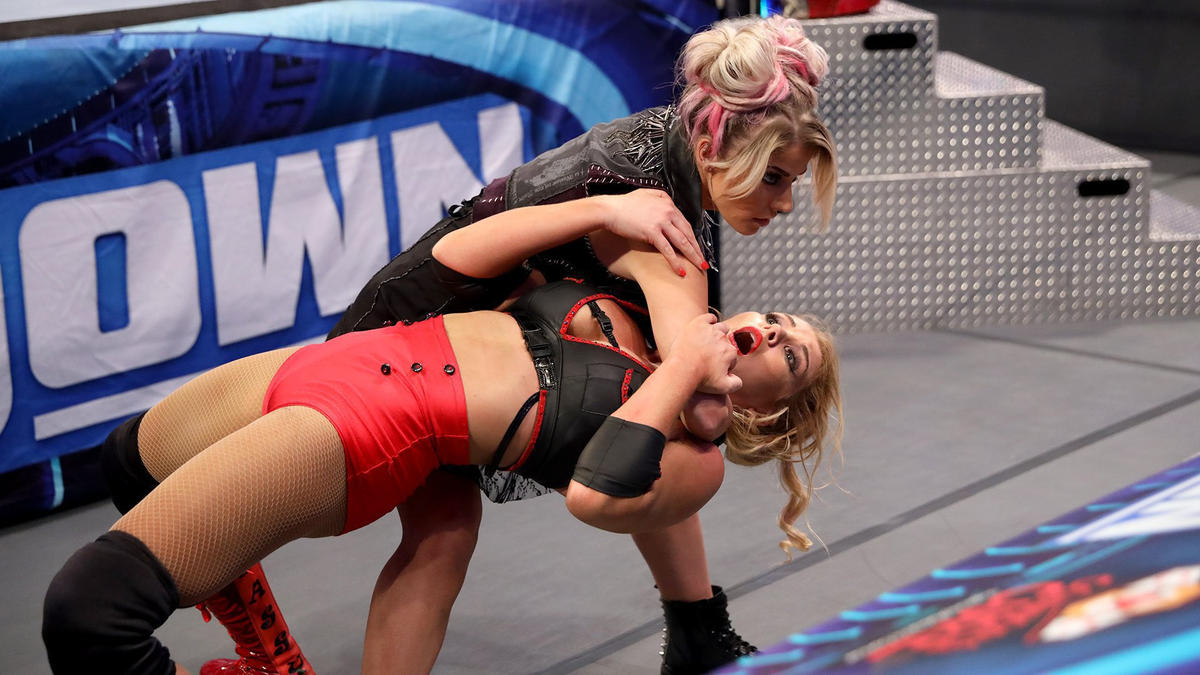 Alexa Bliss is clearly going through it right now; dealing with some PTSD, stealing other people’s moves, and experimenting with hairstyles that she really shouldn’t have. Naturally, her bosses thought it would be a great idea to have her host a talk show. She sat down Nikki Cross to talk about her upcoming championship match with Bayley, but Cross was really concerned with how Blies had introduced her BFF’s head to the floor last week. Bliss said she didn’t know what had happened when she delivered Sister Abigail, but before we could get into this prequel to The Exorcist any more, Lacey Evans interrupted. She gave some generic insults to Cross, which lead to a match between the two up next. This was brief, as expected, with Bliss playing her old self on commentary. In a sign of the times, Evans sprayed hand sanitizer into Cross’ eyes, but still Nikki hit her swinging neck breaker to win. Lacey came over to commentary to yell at Alexa, but she made the mistake of mentioning The Fiend, and ate a Sister Abigail for her troubles. Alexa’s sudden changes are intriguing, but I’m waiting for her to bust out some of those gymnastics and spider crawl down the stairs. 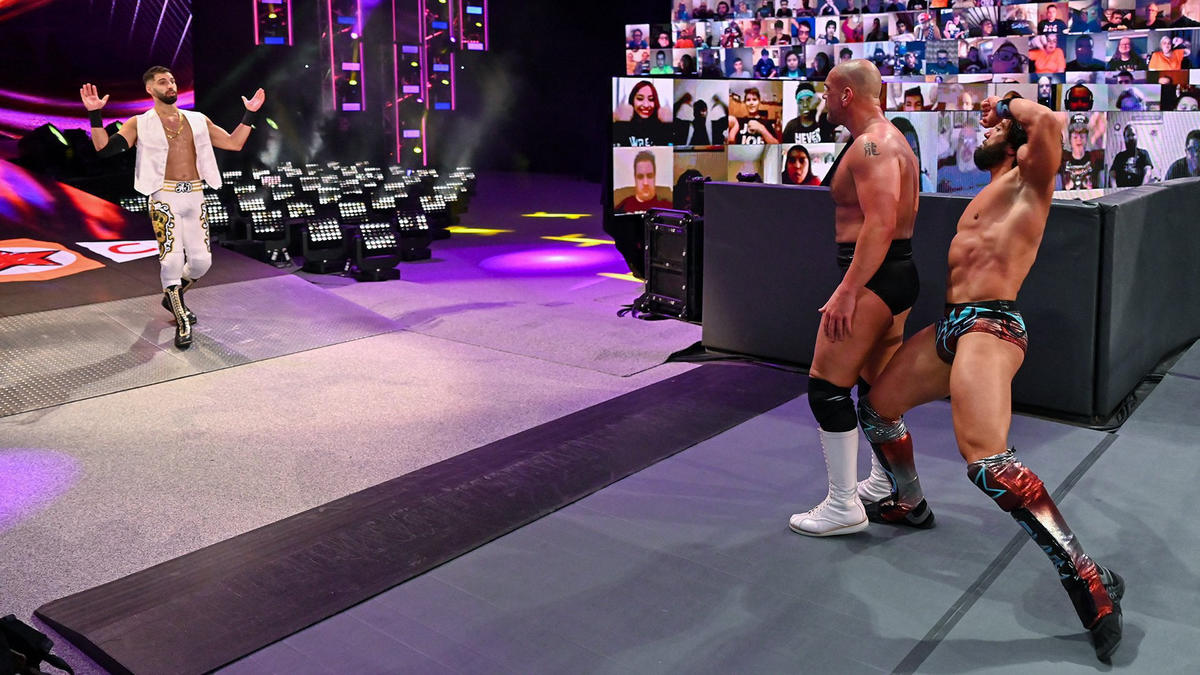 No Such Thing as a Free 10k

Ariya Daivari announced the invention of the Dinero Division, because I guess they’ve officially scrapped the idea for those cruiserweight tag belts. Daivari offered $10,000 to anyone who could beat him that night, and was offered up three fresh faced opponents. This was a gimmicky mix on squashes, as Daivari ran through Eli Knight, Jason Cade, and Bobby Flacko to safely walk away with his cash. Daivari’s snotty rich boy schtick works for him, and this was a better use of his time than burying Tehuti Miles/whatever they want to call him this week yet again. In the main event, Tony Nese took on Danny Burch in a very good rematch from last month. Daivari came down to commentary to distract Burch early on, but he stayed in it with a missile dropkick. Nese missed the moonsault and got caught in the crossface, but got to the ropes just in time. Daivari left commentary to catch Burch’s attention again, causing him to eat the kneestike and for Nese to pick up the win. I like seeing Burch in singles action, so this one really worked for me.