Truly a mixed bag for WWE this week. Shane McMahon returned to our screens for the first time in over a year with one of the most hit-or-miss segments we’ve seen from WWE in some time. We saw the Golden Role Models pulled double duty, because SmackDown has forgotten they have several other women on their roster. Oh, and a group of kids dressed like stage crew beat up all the NXT recruits. Kind of a busy week, actually. Let’s break it down: 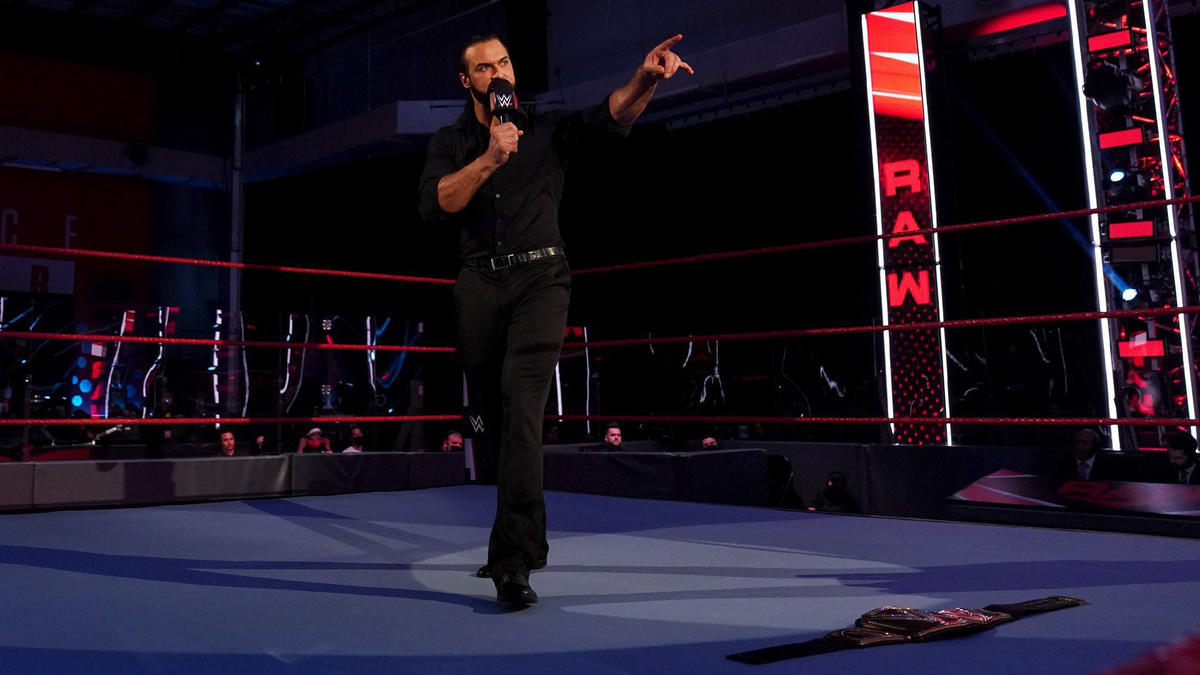 Drew McIntyre is a good boy who wears button down shirts, pushes in his chair, and says please and thank you. Randy Orton doesn’t seem to own a shirt, which makes him a very mean man for forcing us all to look at that skull tattoo 24/7. This week, McIntyre cut a promo reminding us of that time he got fired, and all the good it did for darkening his hair and kick-starting his career. He insinuated that Randy Orton may have gotten some special treatment in the WWE, on account of becoming the youngest ever world champ and having famous wrestlers for relatives and all that. Orton interrupted to pretty much back up everything McIntyre said; agreeing that he probably should have been fired from WWE a while ago, but they kept him around because he’s Randy Orton and even my grandma has heard his name before. He promised Drew that he would remain relevant long after McIntyre had lost the title. In return, McIntyre promised to kick Randy’s sweet little head off at SummerSlam. This match should be good, and the promos from both guys have been very solid. McIntyre performs well as the people’s hero, and it helps when he wears those tight Levis. 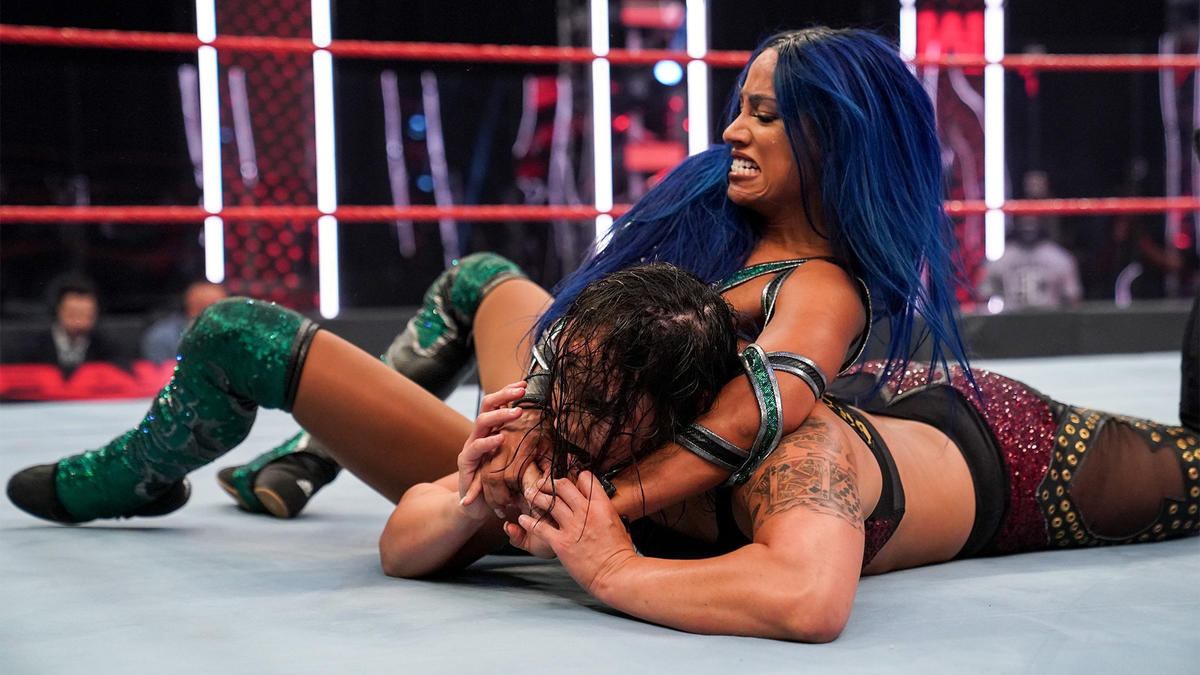 After officially knocking off Asuka last week to officially become 2 Belts 2 Banks, Sasha and Bayley were celebrating their eternal friendship and the pain of carrying two twenty pound belts everywhere. During a backstage interview, they were interrupted by Shayna Baszler, who told Sasha she’d waited too long for her title shot with Asuka before Banks stepped in. Shayna knocked Banks down, leading to a non-title match between the two later in the night. We haven’t seen these women face off before, and what little we got of this match was really good. Baszler’s style is so different from most other women on the roster, it’s great to see how she works with everyone. Bayley helped her BFF with a distraction on the outside, and Sasha took control for a little while. Shayna managed to fight her off and lock in a sleeper hold, but Banks countered into the Bank Statement. Asuka emerged ringside to attack Bayley, which somehow ended the match in a DQ, even though neither of the women involved were actually in the match at hand. Don’t think about it too hard. Banks and Baszler will obviously meet again soon, and I’m looking forward to their actual match up. Post-match, Asuka announced she wanted a title shot at SummerSlam, but Banks declared that she would have to beat Bayley Dos Straps next week to earn it. 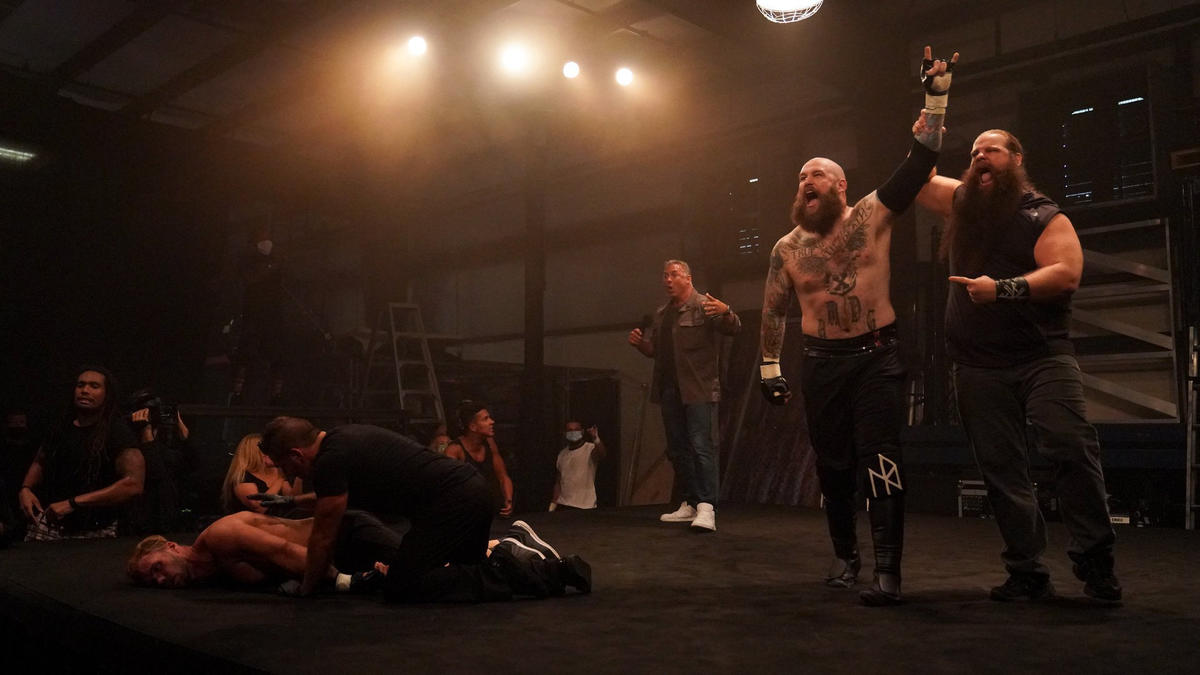 When you remind yourself that the McMahon family is constantly reliving 1997 every year of their lives, some of their decisions actually start to make sense. This one, coming from the returning Shane, is one of those calls. Raw Underground isn’t a thoroughly horrible idea; in fact, it seems more than likely to have been generously inspired by a fairly recent Chikara angle called The Crucible. I’m not versed enough in the past few years of Chikara to comment, but others called them out on Monday night for what seems like a pretty strong knock-off.

Essentially, Shane has invited a bunch of wrestlers to shoot fight in his unfinished basement. There’s a ring with no ropes, some sad yellow lighting, and a bunch of extras getting tossed around. Oh, and models who are giving about 10% effort to dancing. On it’s own, it’s not the absolute pits- it has potential to showcase those with amateur wrestling backgrounds, and could honestly be a refreshing change from the WWE match style we see for seven hours a week. Even without the Chikara thievery it would be a blatant Fight Club rip-off, but who hasn’t been in a Film Analysis class with the kid whose only idea is that every other film is also Fight Club? Monday night ended with MVP, Shelton Benjamin, and Bobby Lashley arrived to Raw underground in some slick suits, and demolishing every dude in the room. Shane, who was obviously thrilled anyone in the company felt enthusiasm about this idea, encouraged The Hurt Business to stay. I like MVP, Lashley, and Benjamin as a stable- and this segment especially allowed Lashley and Benjamin to look like serious threats. Raw Underground could help solidify the heel stable, instead of running the same angle of MVP pitching to new talents every week. Or, it could just be Shane hanging out with random sweaty big dudes every week. Could really go either way here. 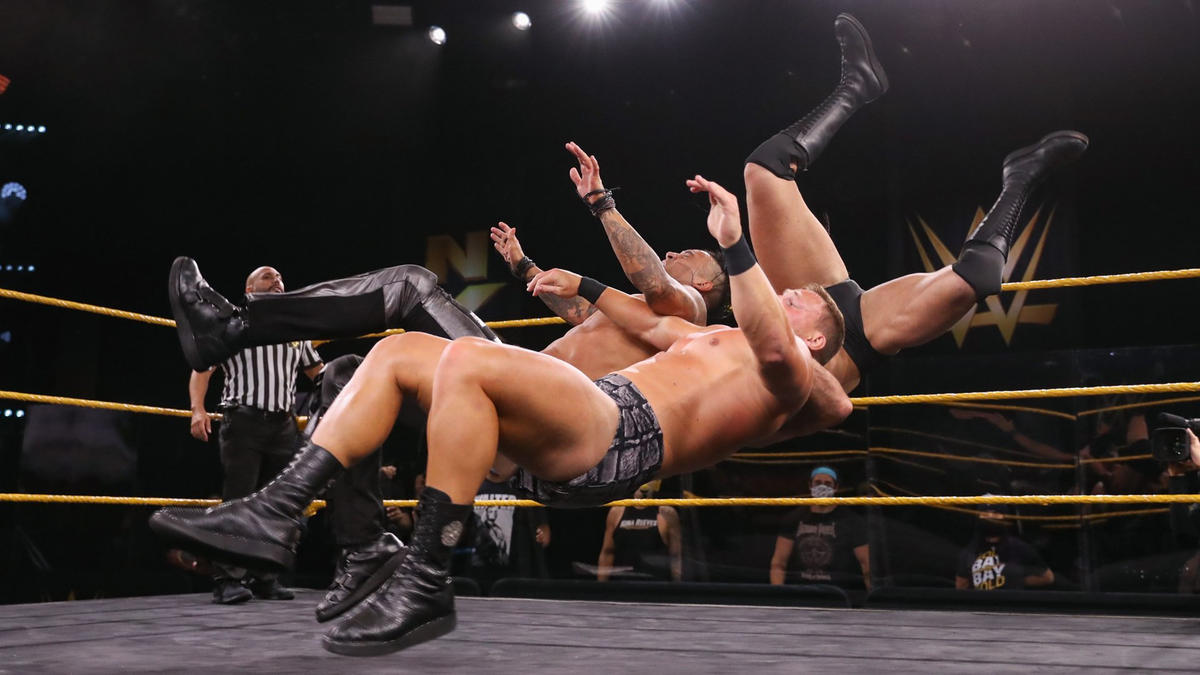 The North American Championship Tournament rolled on with another triple threat, as Ridge Holland (definitely the name of a Bonanza protagonist) faced Damien Priest and Oney Lorcan. I’m not familiar with NXT UK’s Holland, but he put on a great show here, working with the bigger Priest and the hard hitting Lorcan. Lorcan came out hot, driving both Holland and Priest to the outside and landing a dive onto them. He attempted a crossbody off the top rope, but was caught by Holland. Holland and Priest exchanges hits in the middle, and Lorcan landed a double blockbuster on both. All three had moments where it seemed they might get the win; Lorcan landed a series of uppercuts, but Holland kicked out. Holland hit a huge slam on Oney, but still couldn’t get the 3 count. Ultimately, Priest took out Holland with a huge choke slam, then hit The Reckoning on Lorcan to earn the win and send him to the ladder match. Priest is a solid big guy, even if I don’t really get the whole “Archer of Infamy” thing. I’ve never once seen that man with a bow or arrows. 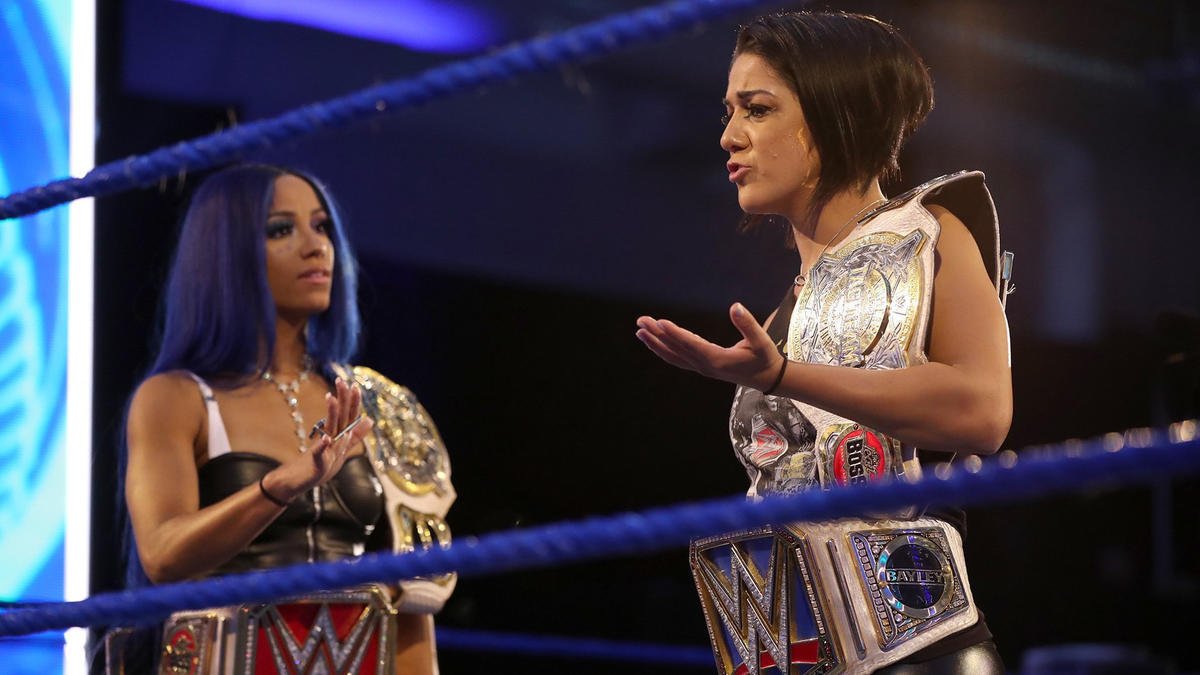 SmackDown didn’t feature a single women’s match this week. Not even a three-minute one where they pretend to have a developing women’s undercard. We got a short-haired Mandy Rose (rock the bob, ma’am) brawling with Sonya Deville during Heavy Machinery vs Miz and Morrison, but that was it. Huge L for SD. Within the women’s division, we did get Stephanie McMahon reprimanding Sasha for how she won the Raw Women’s Title last week, even though she used the stipulations Steph herself came up with. I’m no expert at booking wrestling matches, but if you don’t want someone to be able to become champ through countout, maybe don’t make a rule where the title can change hands through countout. McMahon announced that there would be a triple brand battle royal next week to determine Bayley’s SummerSlam challenger. This presents a lot of good possibilities; I would love to see Bayley and Candice LeRae, Rhea Ripley, or especially Io Shirai, although that one feels admittedly unlikely. 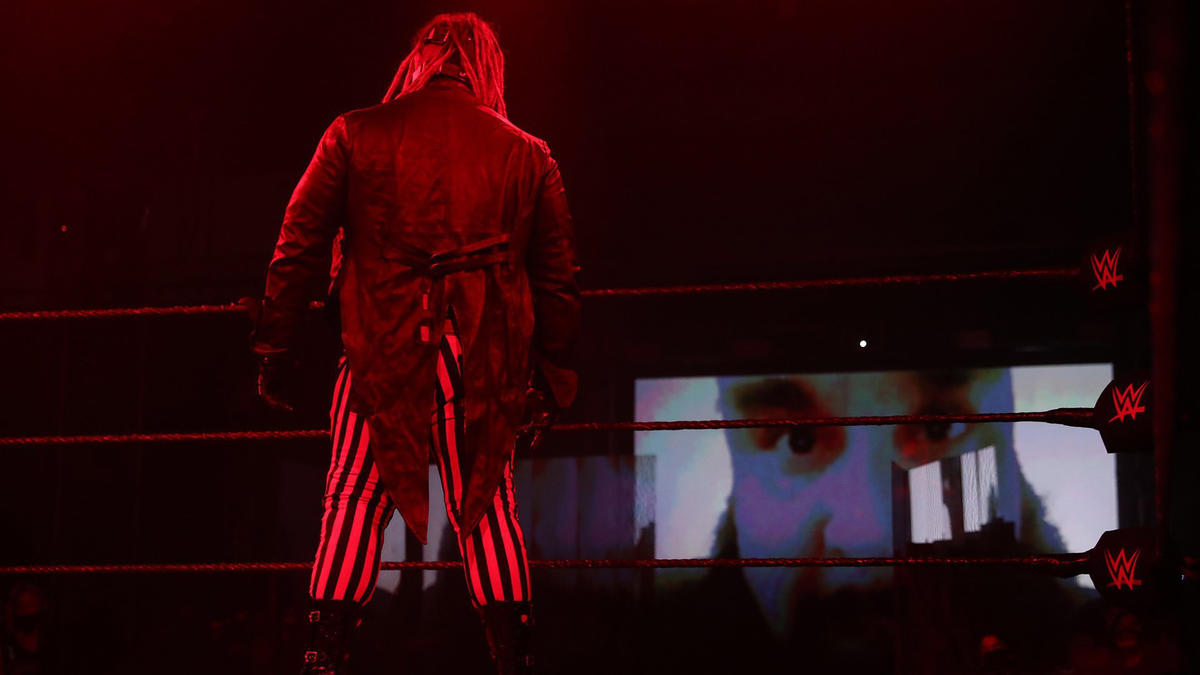 Last week, The Fiend kidnapped Alexa Bliss as a “haha, got your 5 foot friend” to Braun Strowman. On Friday, his tactics seemed to have worked, as we saw Strowman for the first time since going swimming in Florida at night. The Fiend brought Bliss to the ring and attempted to attack her again, but she caught his arm and did her best awkward face stroking to make him retreat. Strowman then interrupted on the tron, filming his promo in an extreme close up like no one ever told him about framing. He declared that he didn’t care about Bliss, which is kind of a shitty thing to say about a coworker who you had a televised fantasy about last month. Strowman insisted that the swamp turned him into The Monster (longtime fans will recognize this as the same nickname he had just a few weeks ago), and the only thing he cared about now was beating Wyatt. They’ll face off again at SummerSlam, possibly in the ring this time, although I wouldn’t rule out some parking lot brawl at Publix. Honestly, the only thing that stood out to me in this segment was how bummed Alexa must be right now. She was abducted on air last week and this dude just got on Fox network to say she isn’t worth his time. Stone cold. 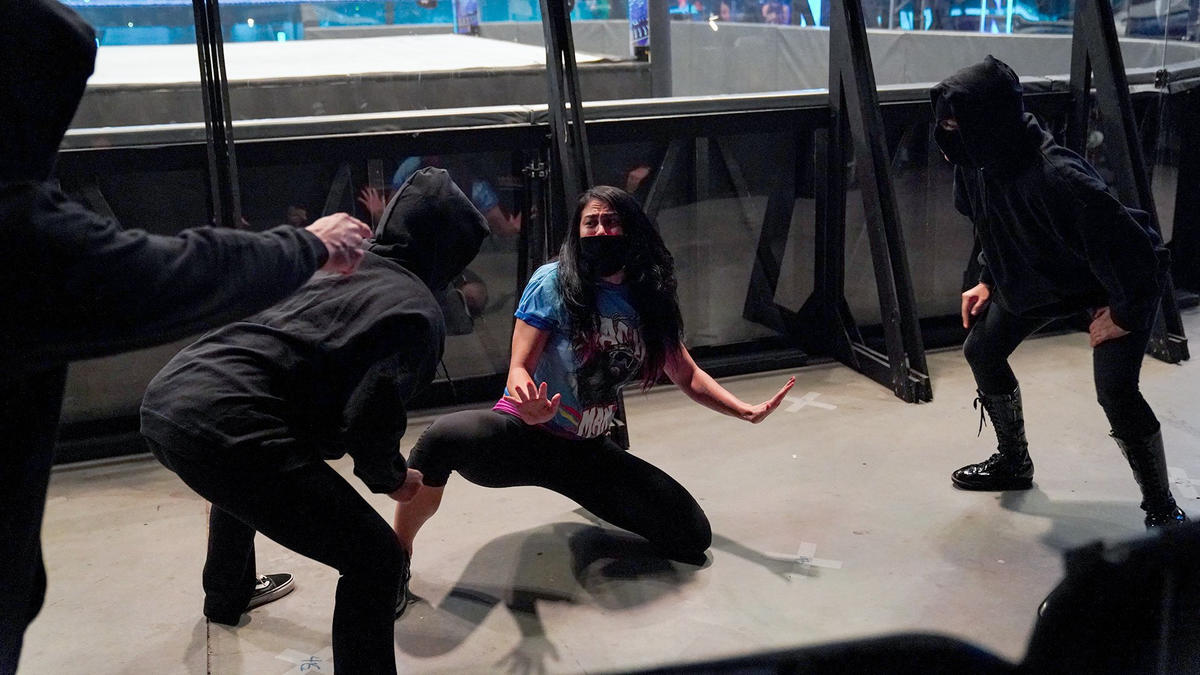 Last week SmackDown promised a new faction would debut, and in true WWE fashion they half delivered on that, as we saw a video of some hooligans lighting a dumpster on fire. This week they got a bit more serious, as Retribution (great 2007 high school band name) stormed the PC with bats and pipes after the main event. They hopped the barricade to run off the ring crew and commentary, spray painted the plexiglass, and even cut through the ring ropes with a chain saw. After displaying the quality of their Home Depo haul, they got back into the crowd and took out the NXT talent. The execution here was pretty good; the camera crew being scared off eliminated the traditional filming style and gave us unique shots of the group tearing the ring up, making the takeover feel more intense. Turns out Dutch angles really work. I don’t have any guesses who could be behind Retribution, but I’m sure we’ll see these crazy kids get up to no good again next week. 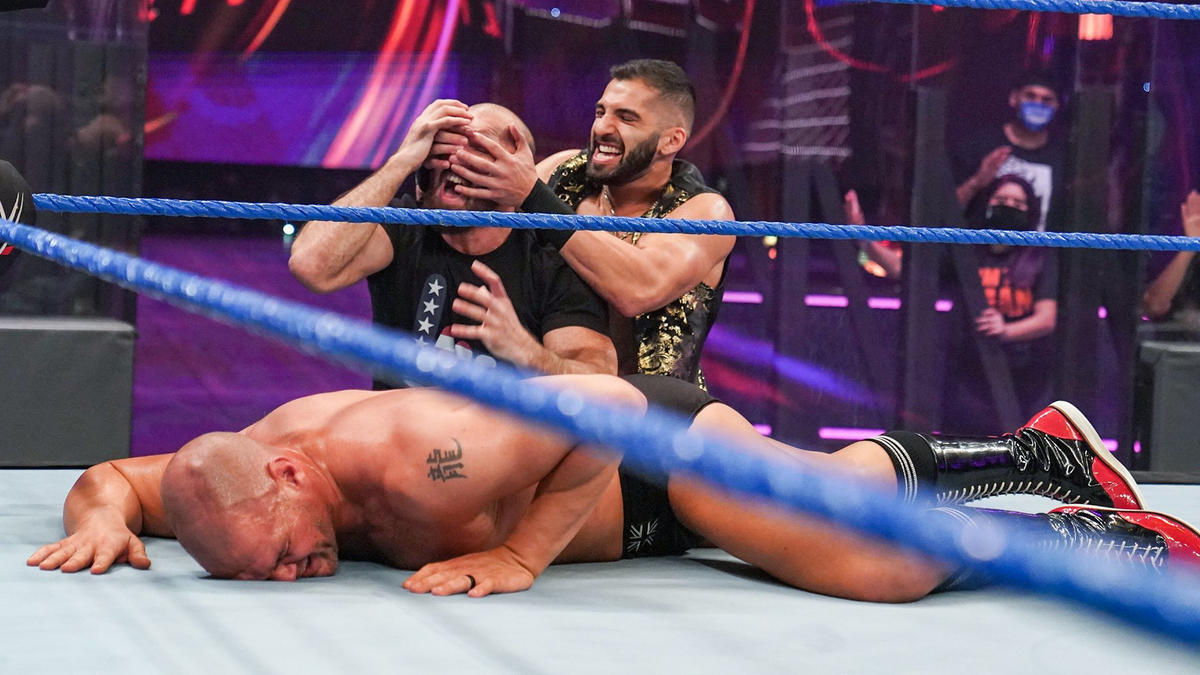 Ariya Daivari has been absent from 205 Live for several months now, probably getting a sick Minnesota tan and hanging with his adorable dog. This week, he made a surprise return to show off some new Versace threads and put the beat down on longtime rival Oney Lorcan. Not a great week for Lorcan, admittedly. Tony Nese and Danny Burch had a competitive match up in the main event, neither able to get the upper hand for very long. Nese went for the 450 from the top rope and missed, as Burch rolled out of the way. Daivari ran in to attack Burch’s backup at ringside, slamming him into the plexiglass as both Burch and Nese were distracted. Burch took advantage, hitting a DDT to get the win. I’d love to see more of Daivari and Lorcan, their Anything Goes match last year was one of 205’s highlights.