We are a little over a week away from WrestleMania 37, and everyone is putting on their best for the return to live fans in the arena. I’ll miss those virtual faces and piped in crowd noise. This year, the festivities are too big for even two nights, with extra cast-off Mania matches, like the André the Giant Memorial Battle Royal, happening on next week’s SmackDown. André loved Fridays on Fox. 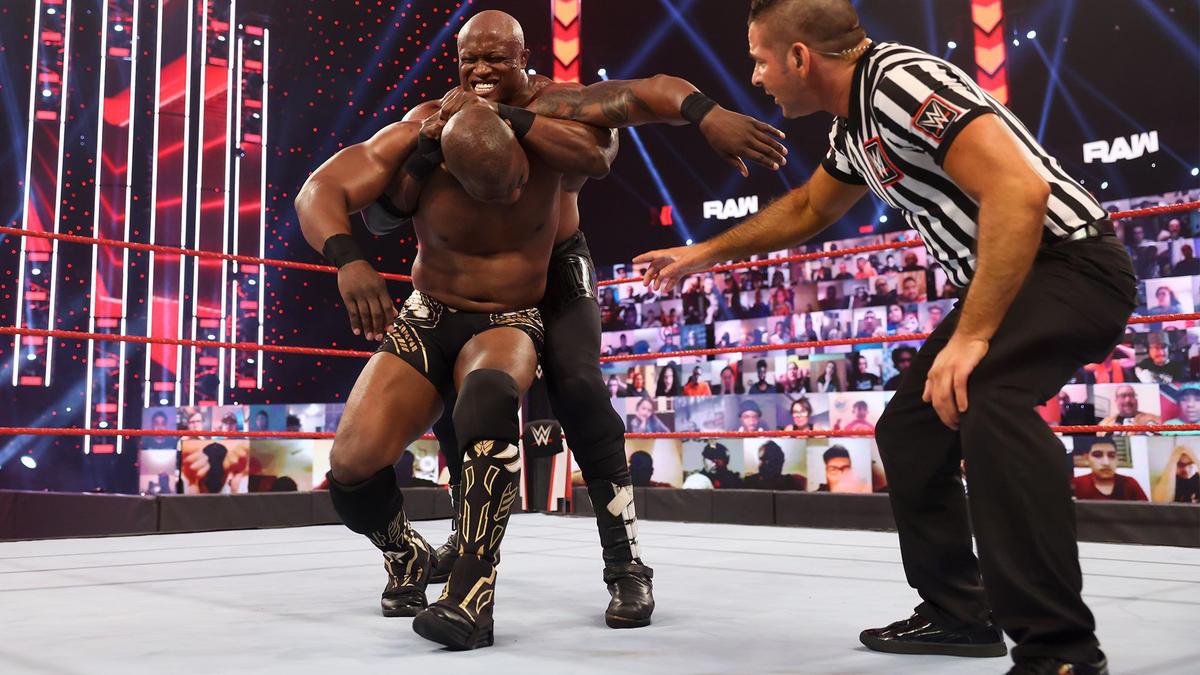 WWE likes to follow a simple formula: make something good, then ruin it by failing to understand just what was working. The Hurt Business was a great example of talent succeeding where WWE failed; under MVP’s tutelage, Lashley, Benjamin, and Alexander all became big players on Raw. Without MVP, it’s safe to say Lashley would not be in the position he is now. Once the group was formed, they just worked—and they looked fantastic in those suits.

Unfortunately, Monday night took my dreams of matching gold waistcoats at Mania out back and shot it. Following their failure to eliminate McIntyre last week, Bobby Lashley and MVP announced they had had enough of Benjamin and Alexander. Lashley dropped both men in the opening segment, declaring The Hurt Business over for the former tag champs. Shelton and Cedric retaliated by asking Adam Pearce for a match later in the night, which saw Benjamin manage to land Paydirt on his former friend. Unfortunately, Lashley still kicked out and hit a huge spinebuster before forcing Benjamin to tap to The Hurt Lock. There’s no reason to break up The Hurt Business like this—Lashley is formidable on his own, but he looked even better alongside the stable. I’d hope this was part of some storyline, like it’s all an illusion to get Benjamin and Alexander to wipe out McIntyre at Mania, but I don’t want to put that much faith in WWE’s story telling. 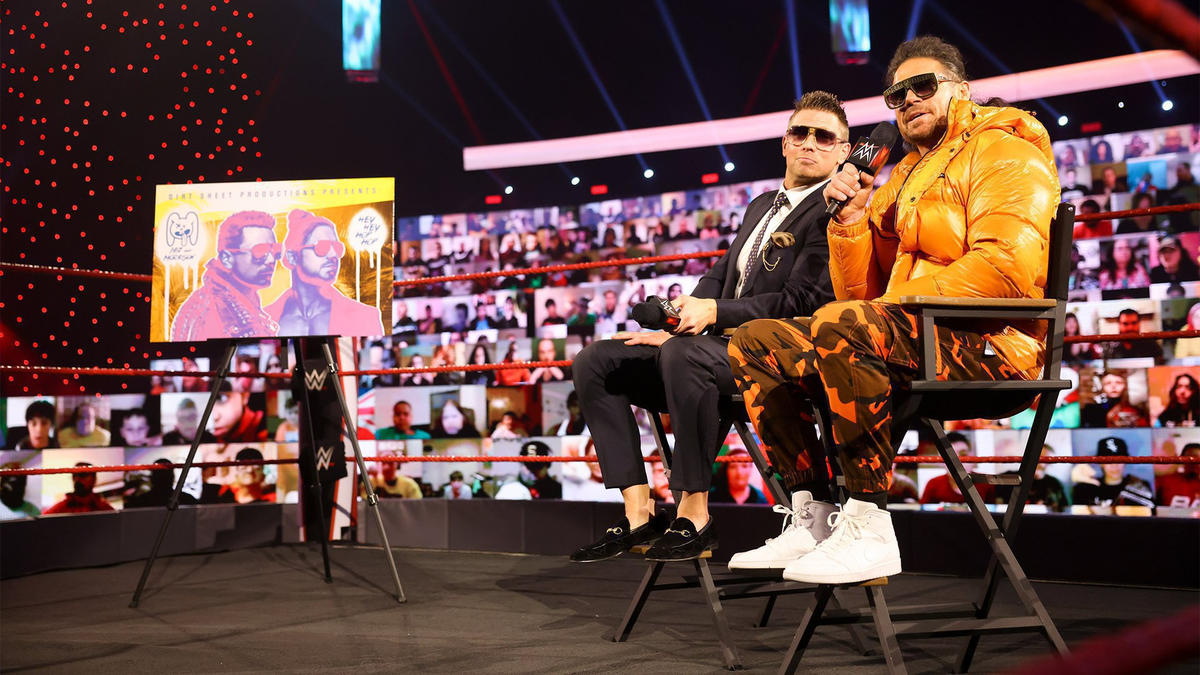 The Miz and John Morrison debuted a new rabbit themed video entitled “Hey Hey, Hop Hop” that shows off their Spanish and admittedly samples from their previous tracks. Before showing us the vid, Miz lamented his upcoming match with Bad Bunny at Mania. Damien Priest and Bad Bunny arrived to give the duo some performance tips, although, in all honesty, the video wasn’t half bad. Miz and Morrison are as entertaining as always; something doesn’t have to be good to be fun, and Morrison’s current WWE run is proof of that. The man is dedicated in everything he does, and if that’s looking like a goof, then he’s gonna give it his all. Miz confronted Bunny on the ramp, and the Dua Lipa superfan hit him with a right hook. Miz dropped on a dime, leaving Bad Bunny and an impressed Damien Priest standing tall. Bunny vs Miz should be a solid time; I can’t be angry at how much fun Bad Bunny continues to have. He’s just out here enjoying himself, and that continues to be a rarity for anyone in WWE. Hope WrestleMania is everything he dreamed it would be. 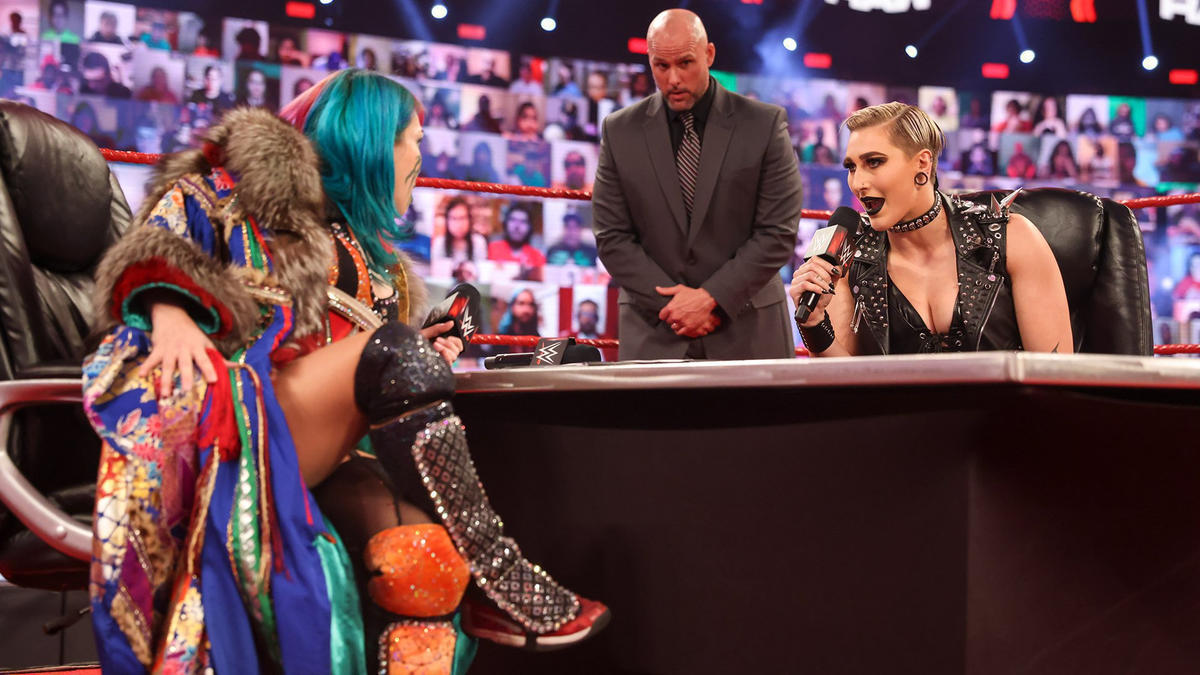 Rhea Ripley and Asuka sat down for their contract signing this Monday night. Like most wrestling paperwork segments, everything went according to plan until the trash talk started. Asuka called Ripley overconfident, which is the accurate word for the hairstyle she’s currently sporting. Asuka told the young star that she hadn’t earned her spot, and even all the metal theme music in the world didn’t make her ready for Asuka. In response, Ripley flipped the table right into the champ’s face.

This brought out Shayna and Nia (and Reggie) to run back their SmackDown strategy of forcing the champ and challenger into a tag match. I’m not sure why, since Baszler and Jax should have their own story going with the tag titles, but I guess we’ll get them vs. Asuka and Ripley next week for ~tension or something. Ripley and Asuka should be a good match at Mania—Asuka could put on a classic with a mannequin—but didn’t she get pinned by Naomi on Raw recently? Shouldn’t she be in talks somewhere? Or are platform boots the key to getting a title shot on the grandest stage of them all? 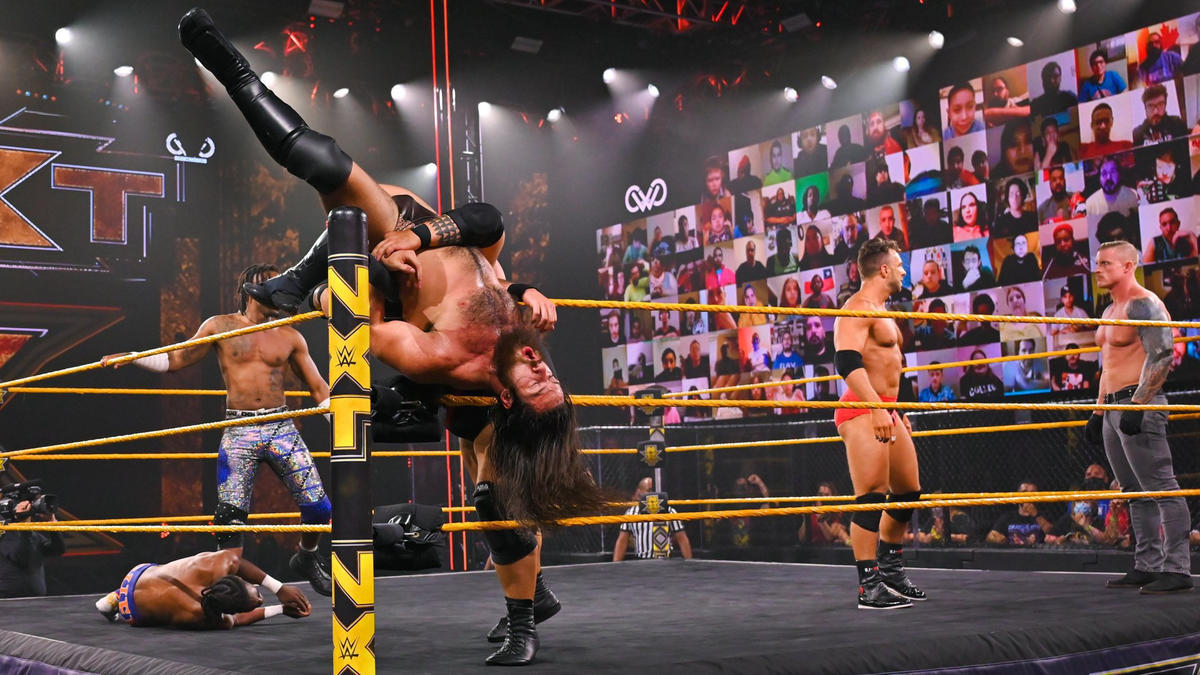 The Wednesday Night Wars are officially done and buried, which is sad news for anyone who likes tweeting numbers early Thursday morning. WWE announced this week that following Stand and Deliver, NXT would be moving to Tuesday, because Wednesday nights are Chicago PD marathons on USA. The main event of the final proper Wednesday night NXT was as confusing as we could have hoped; a battle royal to determine the participants of a gauntlet match the first night of Stand and Deliver, the winner of which would face Johnny Gargano for the North American Championship.

There were 11 men to start (Roderick Strong decided to call it quits for the night after being upstaged by an 8 pound dog) and the rules were after the first 5 were eliminated, the order of elimination for the final 6 would determine their entry position into the gauntlet match next week. Don’t think about it, just watch men throw each other around. Jake Atlas was the first one out, followed by Tyler Rust. Austin Theory essentially eliminated himself by planting his feet on the floor after being thrown out by Bronson Reed. Pete Dunne and Kushida simultaneously eliminated each other, leaving us with the final six. Reed took care of both Ruff and Swerve, and the three others needed to join together to knock out the big Aussie. Grimes tried to bribe Lumis and LA Knight, but they tossed him over the top. Knight went through the middle rope and yanked Lumis off the apron to win and secure his spot as the last competitor. This didn’t outstay its welcome, and furthered feuds for guys who wouldn’t be anywhere near Gargano anyway. 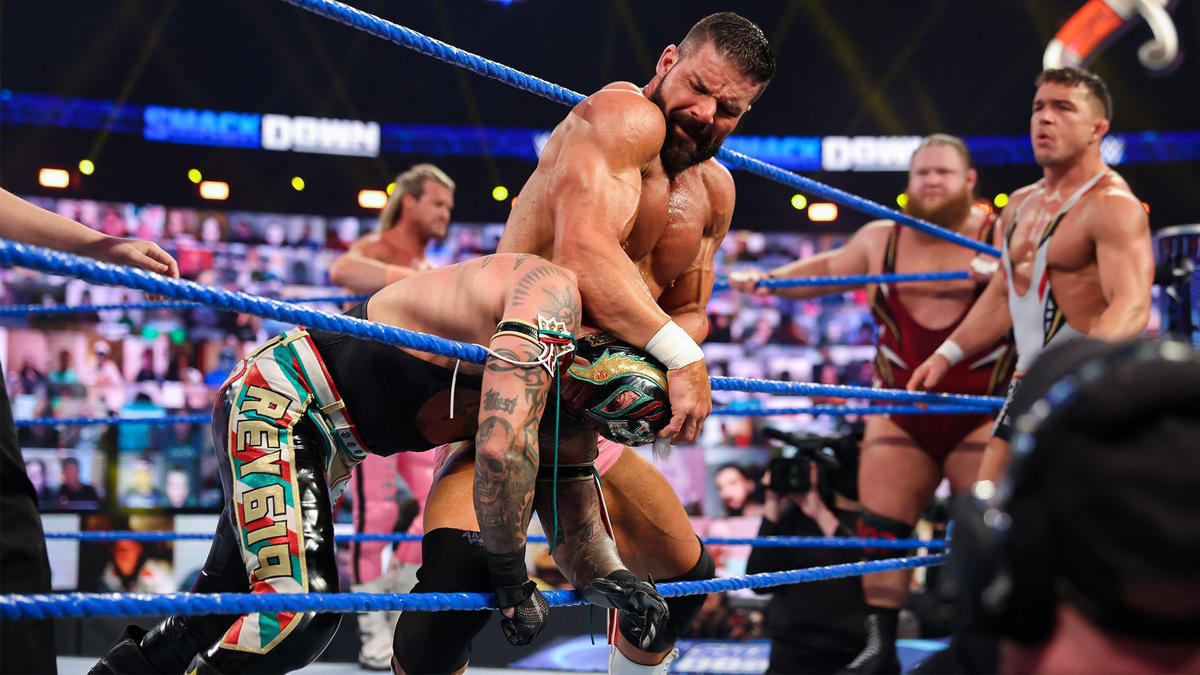 The SmackDown tag team division has been trucking on under the rule of the Dirty Dawgs (real team name), Ziggler and Roode. WWE announced that next week the titles will be on the line in a fatal fourway between Alpha Academy, Street Profits, The Mysterios, and the champs. Nothing says “we totally respect tag team wrestling” like airing that match on a Friday night. This week, the faces and heels teamed for an eight man tag; Gable and Otis are now bad guys, because the enemy of the WWE corporation is the blue collar worker.

This was short and sweet: Dolph had control of Dominik to start, forcing him into the corner. Dom came back with a DDT and after commercial his dad was taking care of business. He tagged in Dawkins, who cleared the ring until Otis got the tag. The heels took control, isolating Dawkins in their corner. A firey Ford finally tagged in to land several dropkicks, and everybody got to hit their big moves. Gable evaded the splash to tag in Otis, who hit one of his own to win it for the baddies. No clue what to expect heading into the pre-preshow Mania match, feels like the titles could easily fall to any of these teams. Should be a solid match if they’re given more than 7 minutes. 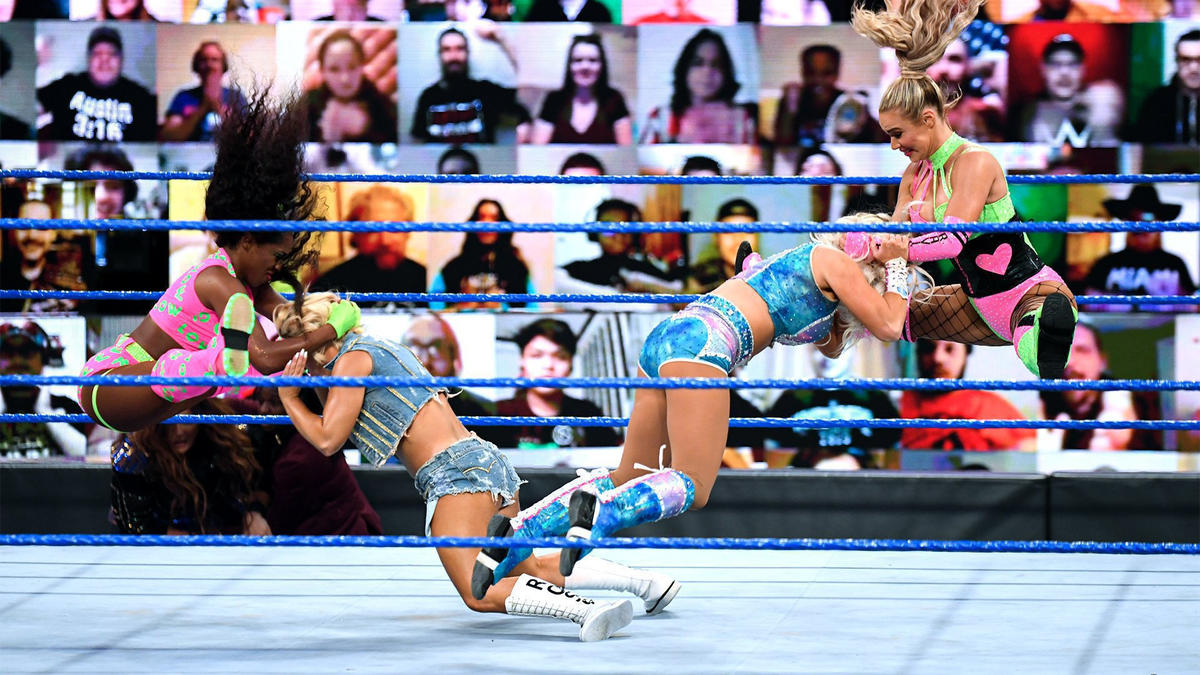 All That and a Bottle of Wine

Backstage, Nia Jax teased Carmella about not being good to Reginald, who has become sommelier to the stars. Just what all little wrestling fans dream of. Jax then joined commentary to watch partner Shayna Baszler take on Natalya. Right away, Nattie forced Baszler into the corner but backed off. She wanted the Sharpshooter, but Baszler countered. She blocked Shayna’s attempt at a submission and the two traded roll ups, until Natalya finally got the three count in a surprisingly quick match. Jax and Tamina both joined in the ring and all four women fought. This brought out The Riott Squad, who nailed Jax with a DDT. Baszler got the Kirifuda Clutch on Riott, but was interrupted by Dana Brooke and Mandy Rose. Lana and Naomi joined the party as well, with the ravishing one wiping out Baszler with a crossbody. Naomi and Lana took down Jax, Rose, and Brooke, but Tamina was back in, sporting some stunning new gear. She and Natalya finished Ravishing Glow to stand tall and end the scramble. Another multi-team tag match feels very likely; let’s hope this one makes it to Mania. 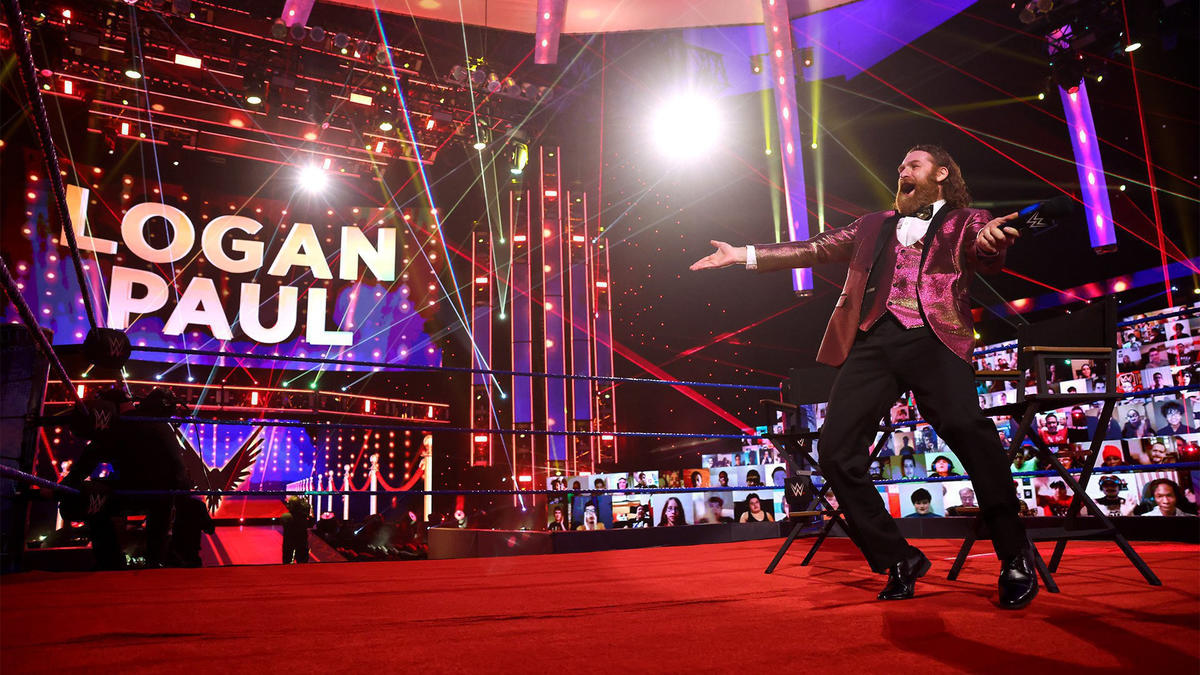 One time SVU guest star Logan Paul made his WWE debut on Friday night when he joined Sami Zayn to discuss conspiracies and swap filmmaking tips. Paul was there to celebrate the release of the trailer for Sami’s documentary; a huge day in YouTube history. Sami, who looked like he had raided Rollins’ discarded Party City suits, invited Paul to Mania as his own personal very special guest. We were treated to the documentary’s trailer, which was rated ‘T’ for ‘truth.’ It was honestly pretty funny, but Zayn is so committed to the bit that he could sell just about anything. Paul looked a little underwhelmed, but before he could give his expert input, Owens ran in from behind and dropped Zayn with a stunner. Paul is a weird addition to this storyline, but this segment worked for him and Sami. No doubt we’ll see him get involved at Mania, but after being privy to the inside of Sami’s mind, he just might side with KO on this one. 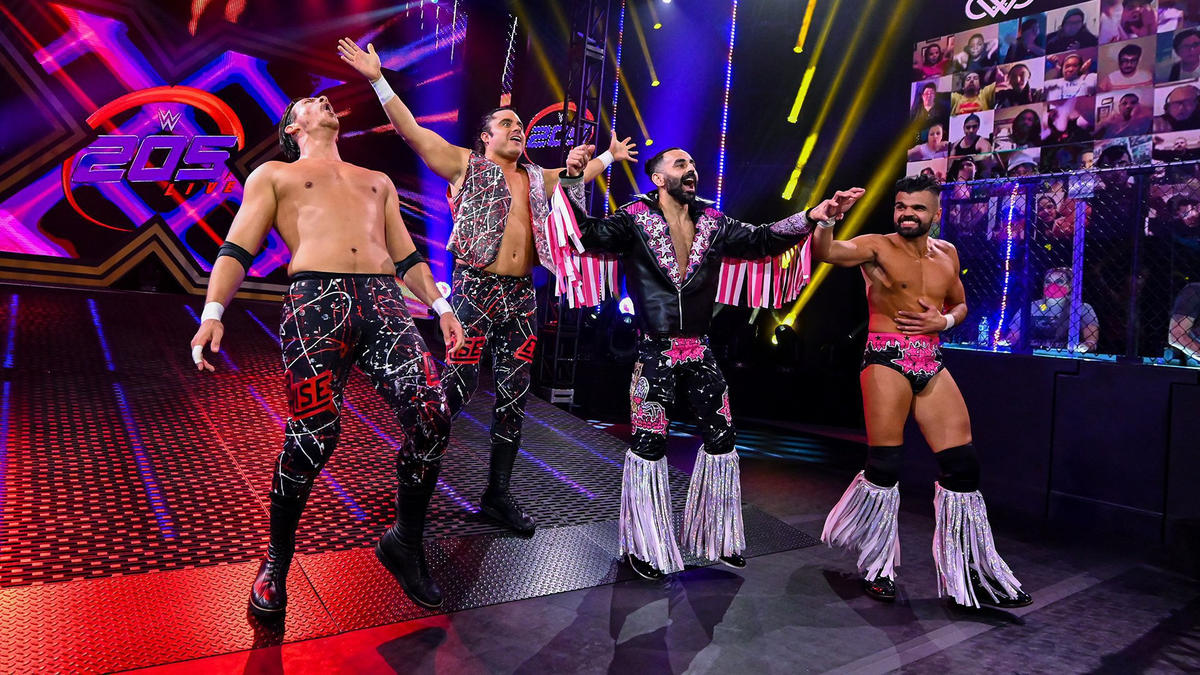 The OGs were back in action this week, taking on the mis-match of Bolly-Rise: Chase Parker and Sunil Singh. I forgot these two teams were still teaming, for some reason. Daivari and Singh were in first, with Daivari backing the Bollywood star back into his corner. He tagged in Nese, but Sunil caught him with an arm drag. Parker came in and the two hit an elbow drop and a kick to Nese’s head back to back. Bolly-Rise seemed to finally be on the same page, and it only took 3-6 months. Singh knocked Daivari off the apron and laid into Nese with chops, but a distraction from Daivari let Nese land a strike. Daivari teed off on Sunil and brought Nese back in to land a kick for a 2 count. Parker came in to clear both the heels, and things started to break down. Samir tried to slide his brother a chain, but it was picked up by Daivari. The ref called him out, and allowed Sunil to roll him up for the win. Bolly-Rise lives to see another day, folks.