WWE is moving towards Clash of Champions at the end of this month with all the grace of a newborn horse first learning to walk. Unlike the quick turnaround for Payback last month, there’s still two weeks to build storylines for the upcoming PPV, but you really wouldn’t know it with the way feuds are being telegraphed. Here’s a rundown of the best, the brightest, and the things that definitely happened this week: 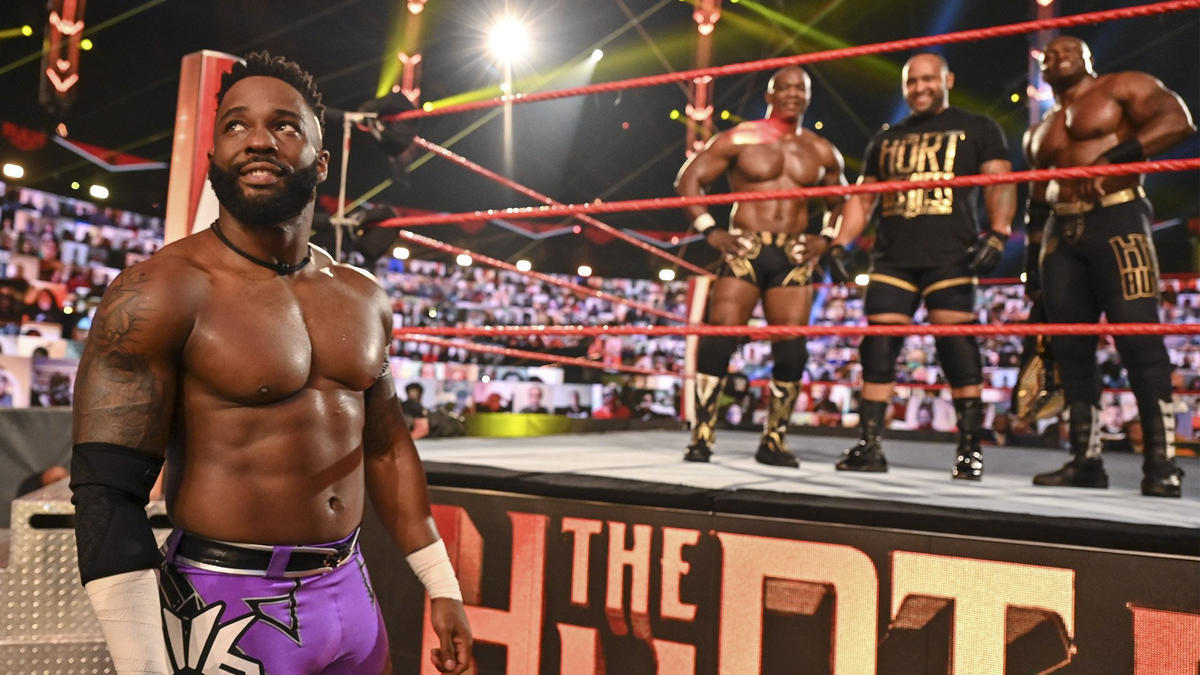 After aligning with Apollo Crews alongside tag partner Ricochet recently, Cedric Alexander and his friends faced the Hurt Business this week in a 3-on-3 tag match. Prior to the match, MVP and Benjamin attacked Alexander during his entrance, putting the faces at a disadvantage. The Hurt Business started things off strong, going after Crews, isolating him from his teammates to beat him down. Apollo barely made it to his corner for a tag, but the big twist came when Alexander pulled Ricochet off the apron. He then got in the ring, giving a Lumbar Check to Crews and letting Shelton pick up the win. Commentary seemed baffled over what this meant, even though it seemed pretty clear to anyone watching that Alexander had just helped the heels score a win, so my guess would be he’s not such a nice man anymore. Cedric later joined MVP in the VIP lounge, explaining that he wanted to get ahead and make a name for himself. This made plenty of sense, given the amount of attention he’s been paid as a good guy babyface. If my choices were say mean things on TV or spend the night in catering, I’d buy a JC Penney suit and hang out with MVP too. This lead to an attack from the Viking Raiders with Ricochet and Crews, which then lead to an 8 man tag match. If you’re keeping track, this is 3 segments related to the same story happening in the span of about an hour. The match itself was fine, and gave Alexander a good chance to show off, but the finish was a mess- after the Neuralyzer for a 2 count on Ricochet, all the men entered the ring and started brawling. Cedric hit a Mitchinoku driver that got the win for The Hurt Business, but replay showed it was actually a 2 count. Even sixty minutes out from a fresh heel turn this guy can’t get a break. 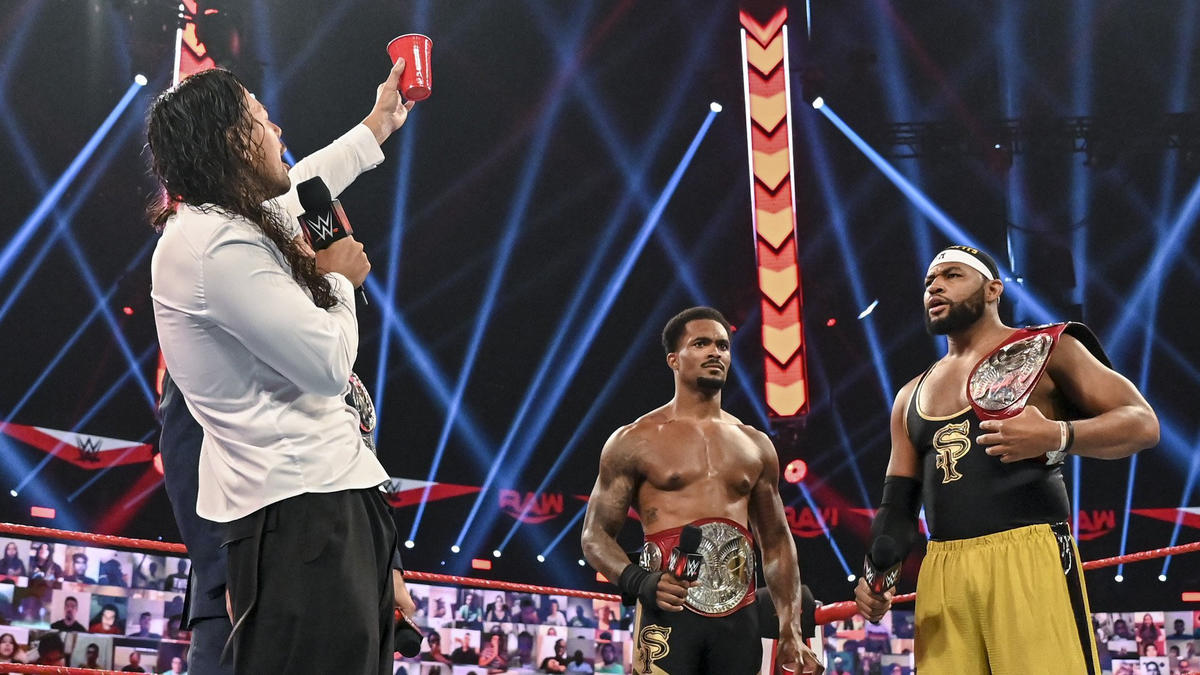 Red and Blue All Over

Another Monday, another match between The Street Profits and Andrade and Garza. Why mess with something that you know fills time on Raw? At least this week we got some slight story development, as trouble continues to brew between two of the most handsome men to ever set foot in a WWE ring. After the beginning of the same match we’ve seen every week for the past 2 months, Angel Garza did the unthinkable and walked out on Andrade and Zelina. This lead to Andrade being pinned after a Frog Splash from Ford, and may be the permanent end to the dastardly duo of Andrade and Garza. I’m not sure breaking up the team would do much for either guy, and it definitely wouldn’t do much for Raw’s non existent tag division. Post match, SmackDown Tag Team Champions Shinsuke and Cesaro came down to call out Ford and Dawkins. Turns our there are no other heel teams on the Raw roster, so they had to borrow from the blue bran. Nakamura and Cesaro challenged the Street Profits for next week, but I guess we’ll have to see if any tag belts end up being up for grabs. It’ll be fun to see the two teams go at it, and it’s a blissful relief to see literally anyone else challenge the Street Profits, even if they had to come from the other show to do it. 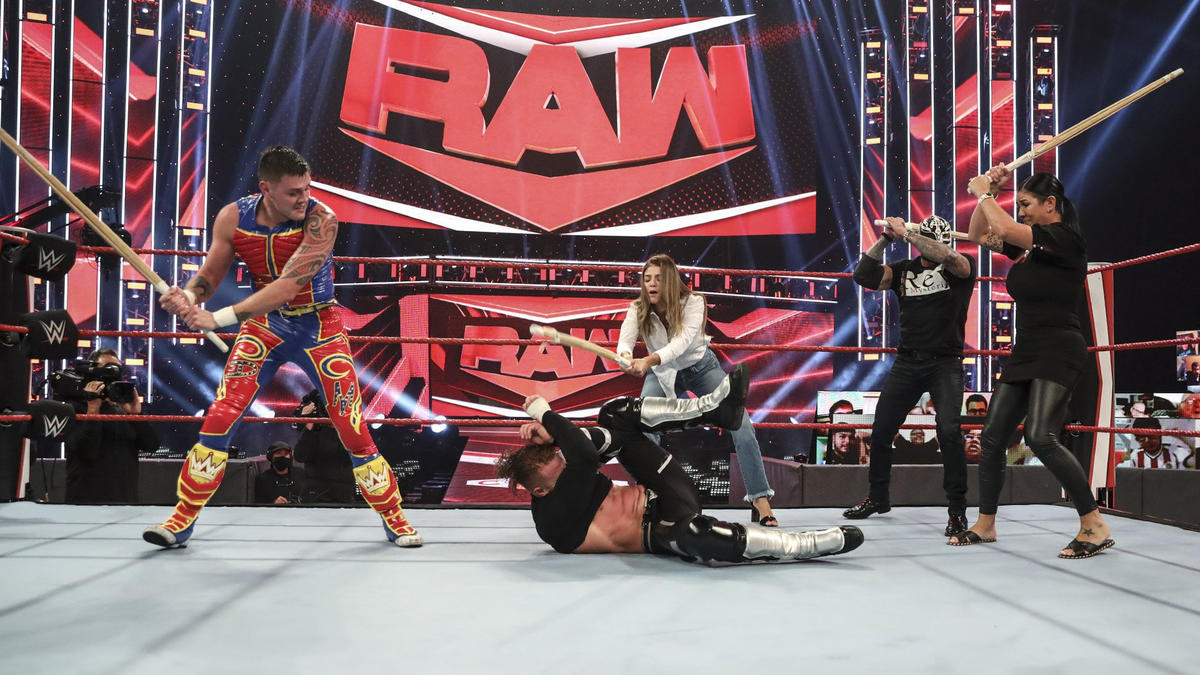 Rey Mysterio literally can’t escape from this feud with Seth Rollins, and he’s determined to drag his entire family into it too. After going back and forth with Seth for what feels like the better part of this entire pandemic, this never ending story continued on Monday night as Dominik went one on one with Murphy in a street fight. The whole Mysterio family, including Rey’s wife Angie and daughter Aalyah, accompanied Dominik on this one, just like when your fam drops you off at college for the first time, only with more kendo sticks. Murphy came out of the gate hot with a huge knee, but Dominik came back by jumping off the ThunderDome screen to wipe Murphy out. The Aussie almost popped Dom’s eye out, but that gimmick is very last month, and instead opted to beat him with a chair. After being helped free from being tied up in the ropes by his mom and sister, Dominik hit a sunset flip power Bomb through a table, and then a huge frog splash. Murphy still kicked out, so the whole Mysterio clan came in the ring to hit him with kendo sticks. Murphy tapped, but the Mysterio’s kept walloping him to end the show. This was a fun match with a great effort from both Dominik and Murphy, but I legitimately don’t think I can handle any more of this feud. Just let someone else make short jokes about Rey, please. We’re begging. 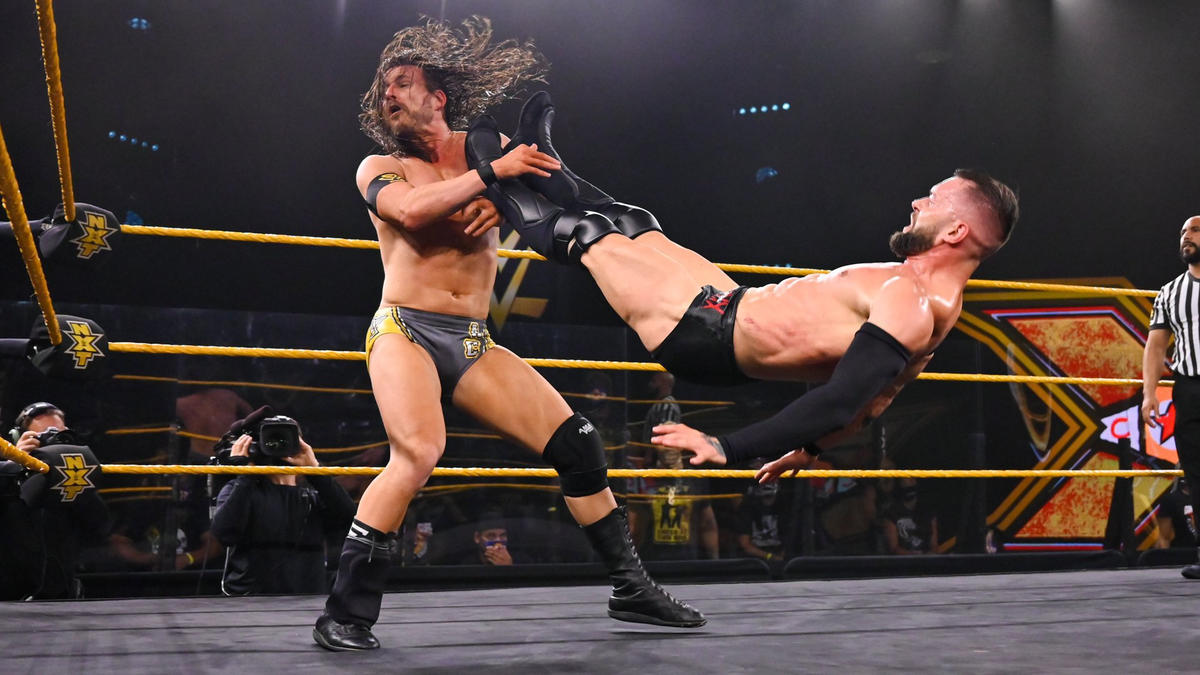 Last week, NXT took a whole hour to not even give us a new champion, so I was super excited to see what foolishness they had in store for this week. As expected, Cole vs Balor was a great match- both guys are supremely talented, and they were the two I’d rather see fighting for the belt out of the four from last week’s match. The two went back and forth early on; Cole focused on Balor’s previously injured shoulder, working it over with some holds. In a cool spot, Balor went for a dropkick, but Cole managed to counter into a Last Shot. Cole put Finn in the Figure Four to wear down his knee, which then prevented a Coup de Grace later on. The first sign in months that Adam Cole has more than two brain cells. Cole went for ole faithful in the Panama Sunrise, but Balor hit 1916 and got the pin to once again claim the NXT Championship. I’ve never been a huge Balor fan, but he’s obviously still incredibly solid in the ring, and it’s not a shock to see him wearing gold again given his huge return to NXT. 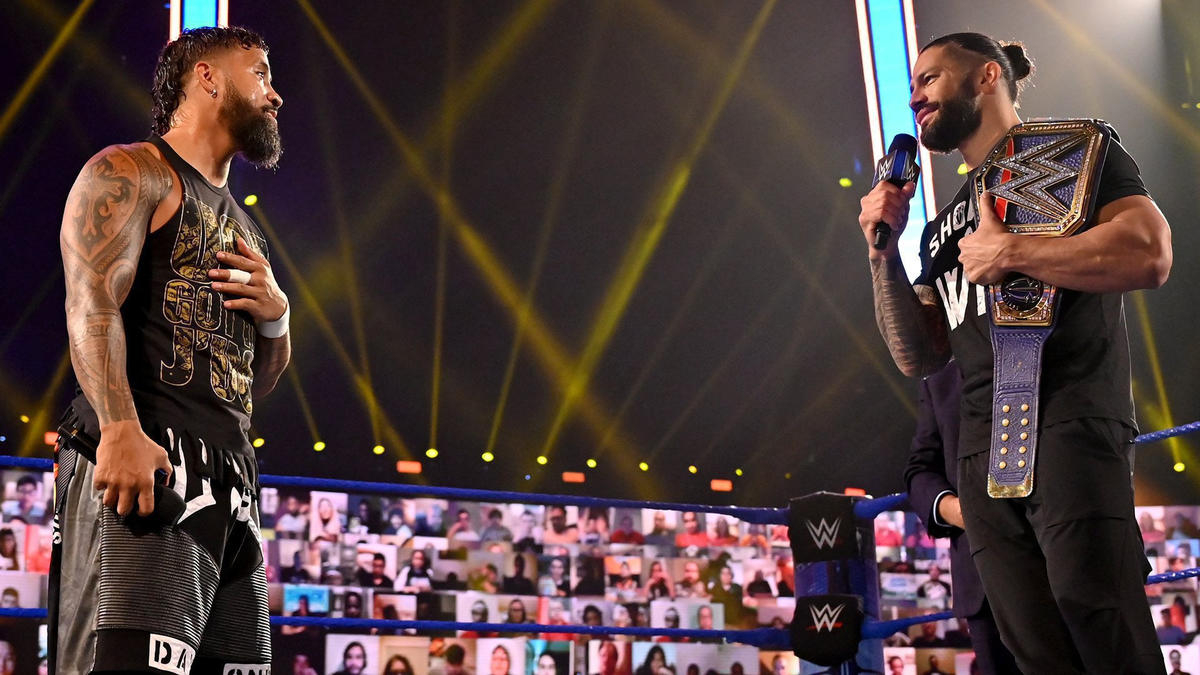 Roman Reigns once again kicked off SmackDown this week, a move I can get very used to. Reigns and Heyman confirmed that they were the ones who got Jey Uso into the fatal four way last week, and Roman promised to “whoop his ass” just like when they were kids. Mr. Reigns please pull out the family photo album next week. Corbin and Sheamus came out to say they’d googled what nepotism means, and they were pretty peeved about the whole situation. Jey suggested a tag match between the two because he believes in the power of family and love and all that good stuff. Unfortunately, Reigns didn’t get the memo, and left his cousin alone for most of the match, allowing the heels to decimate him. Sheamus was about to go for a Brogue Kick when Roman’s music finally hit, distracting him and letting Jey make a comeback. He was trying for a splash when Reigns tagged himself in and landed a spear to win the match. The wrestling itself was fine, but the drama here between Reigns and Uso really worked. Reigns’ new attitude is excellent, and nothing makes a babyface challenger relatable like wanting to kick your cousin’s ass on live television. 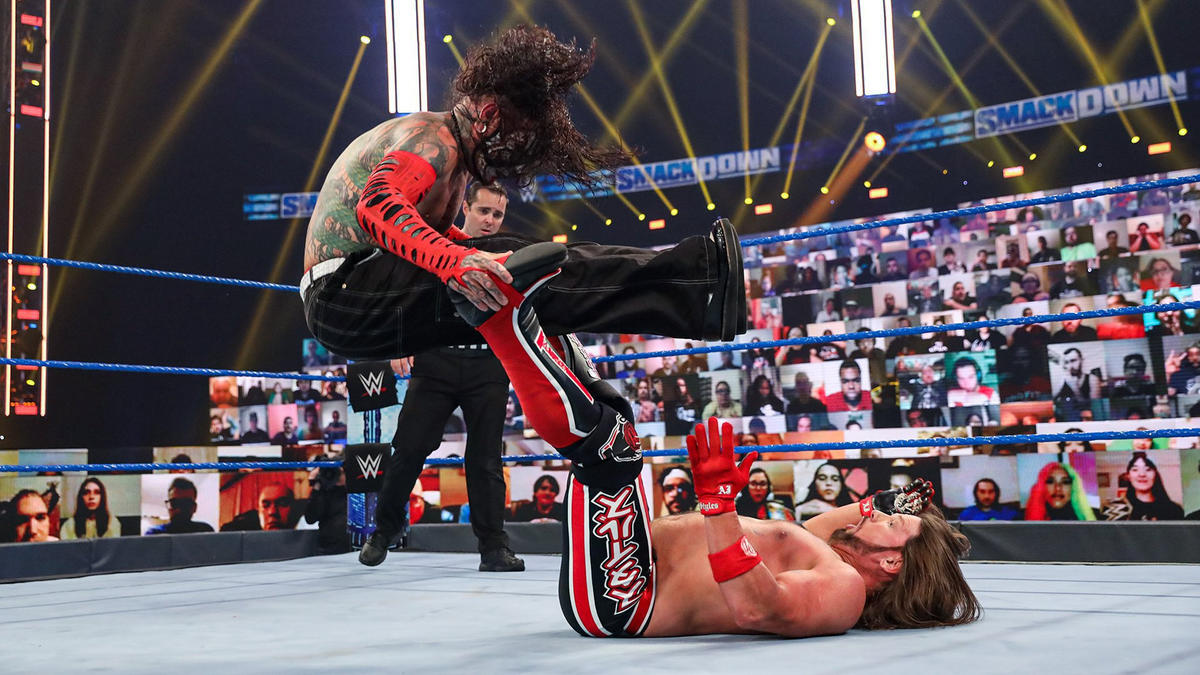 Sami Zayn has skanked his way back into our hearts, and now he’s trying to loophole himself back to being Intercontinental Champion. He announced that the IC title match between AJ Styles and Jeff Hardy wasn’t official, given that he wasn’t even in it, and had to be taken off by security. Styles jumped Hardy while he was distracted by the yelling Canadian, and the two went at it. Jeff almost got a Swanton Bomb early, but Styles tolled outnid the way. AJ went after Hardy’s leg, focusing on the injured knee, but wasn’t able to get very far. Zayn returned to knock Styles off of an attempted Phenomenal Forearm, before landing a Helluva Kick on Hardy. We’ll likely get a triple threat at Clash of Champions, and my money would be on the only man over age 7 to look good in a paperboy hat. 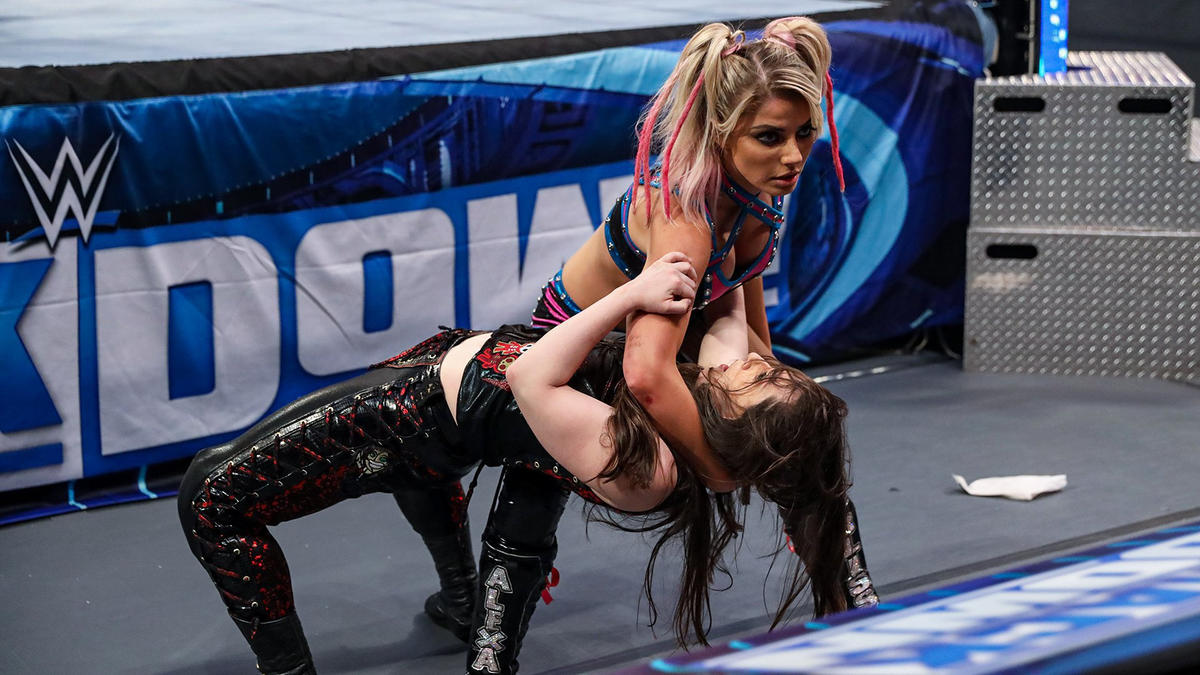 Last week, Bayley did the unthinkable and ended friendship forever with the attempted murder of Sasha Banks’ neck. This Friday, she cut a promo explaining that she knew Sasha was going to turn on her again, probably because of the three times it had already happened, and she wanted to get ahead of this one. She said Banks was “useless” to her, and from now on, the champ is riding solo. This was followed by a fatal fourway to determine a #1 contender, with Nikki Cross, Alexa Bliss, Tamina, and Lacey Evans. Bayley went after Cross as she entered, laying her out outside the ring before the match could start. The story here developed between Bliss and Cross, with Bliss giving a shoutout to her favorite NJPW star and hitting Blade Runner on her friend. She decided that was enough of that and simply walked herself to the back. Bliss’ descent into fiendom has been fun- maybe next week she’ll teach a puppet making class. This left three competitors: Evans landed a Women’s Right on Tamina, but Nikki tossed her out before she could capitalize. Cross hit a sunset flip on Tamina to get the win and face Bayley at Clash of Champions. 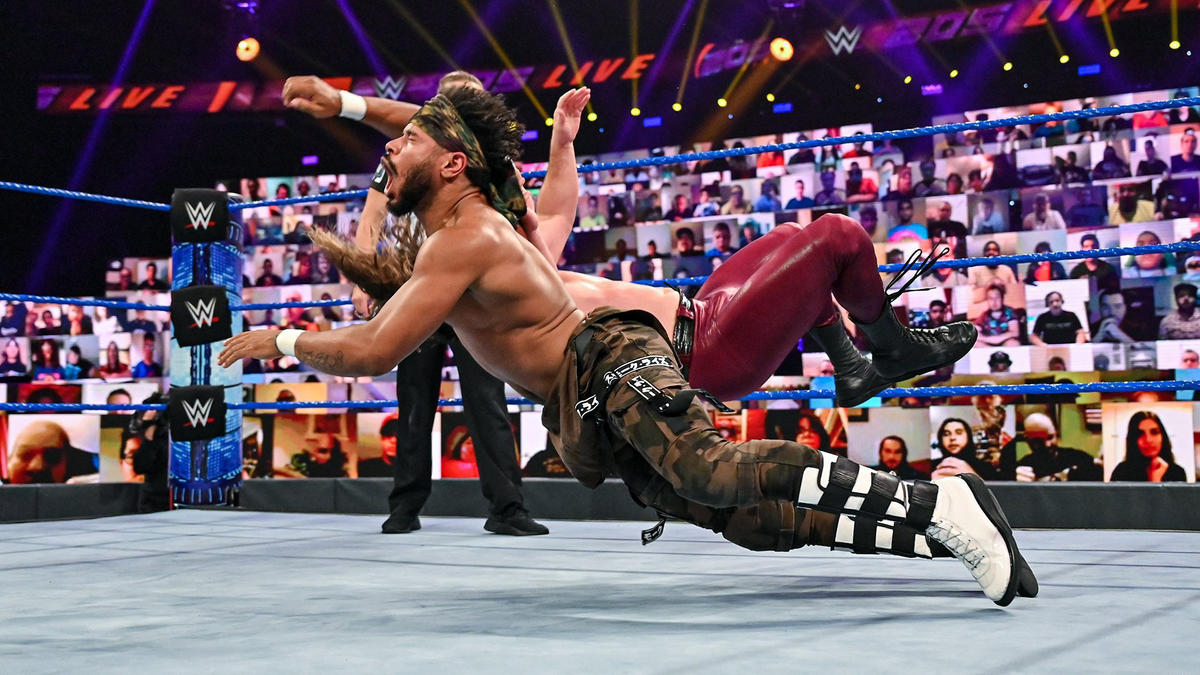 205 Live has rebranded Tehuti Miles as Ashanti “Thee” Adonis for absolute reasons unknown. Miles has charisma and solid wrestling skills, but they keep having him lose to established 205 guys, and now he’s making me type thee in quotation marks. Not a great look. He lost to Brian Kendrick after a fine match, the likes of which I’m pretty sure we actually just saw last week. Post-match, Kendrick complimented Adonis on his effort; I wouldn’t be surprised to see them team up in the near future. Our main even was Legado del Fantasma vs Lorcan and Burch, following Fantasma’s interference in last week’s match. The heels isolated Burch early on, but he made the tag and Lorcan came in with some uppercuts. Lorcan and Burch almost won with a DDT, but Wilde broke up the pin. Escobar got on the apron to yell at the faces, distracting Burch and letting Wilde roll him up. Ever-Rise came out to go after Escobar, but Fantasma had already gotten the win.

Tell Me Why Can't Find the Time to Enjoy the Quiet