It’s almost time for goblins and ghosties and killer clowns in cages, but before we can celebrate the cell, we’ve got to go through yet another circle of hell in WWE’s weekly programming. 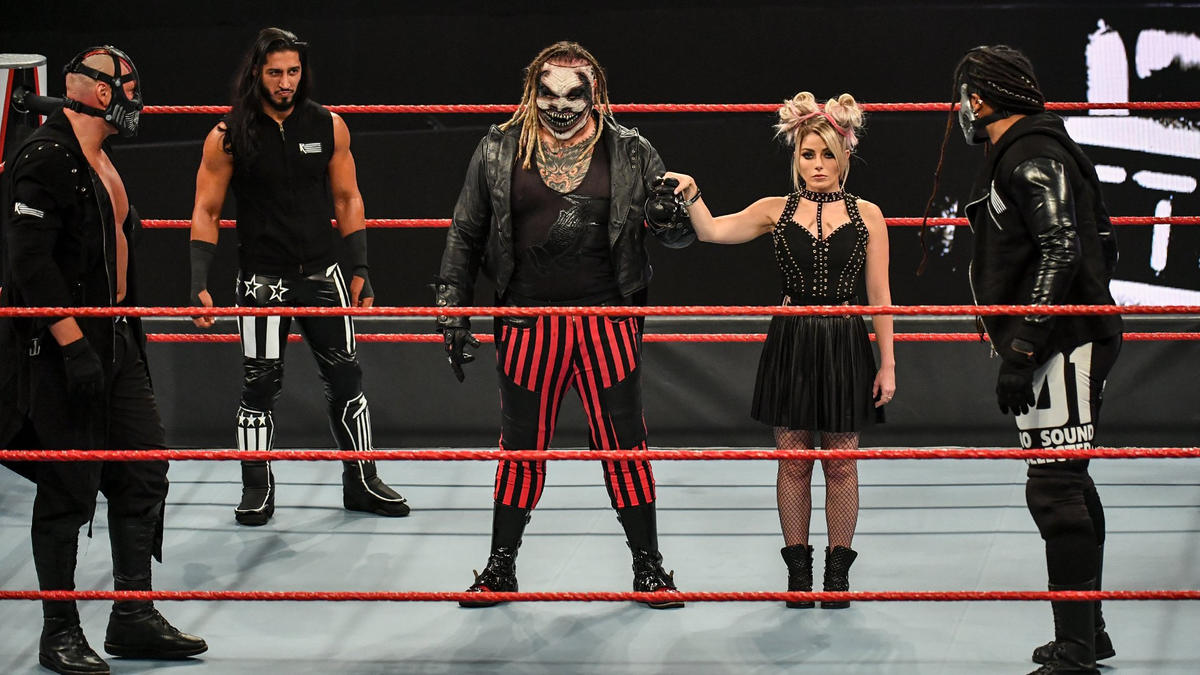 Alexa Bliss has full embraced her dark side. Before appearing as the new Firefly Funhouse co-host later in the night, she opened Monday night by bringing out her new man, The Fiend. The two were gonna take some weird engagement photos or maybe do a DIY giant hammer tutorial, but, luckily, Retribution showed up to spare us the pain. Wyatt did some parlor tricks to disappear, and left us with The Hurt Business vs Retribution. Retribution started out strong, but were apparently so strongly affected by the sight of The Fiend on the train they couldn’t make a comeback, and T-Bar fell victim to Lashley’s Hurt Lock. After the match, The Fiend once again appeared on the apron and wiped out Retribution, minus Ali.

Retribution is supposed to be this new, powerful invading force, so seeing them lose to The Hurt Business and then get wiped out by The Fiend was kind of lame. Ali did his best to save things with a great promo later that confirmed he was the SmackDown hacker who’d grown tired of AOL chat rooms, but the group has to seem like a threat for their storyline to seem remotely interesting. If they’re already getting crushed by your clown uncle, what’s the point? 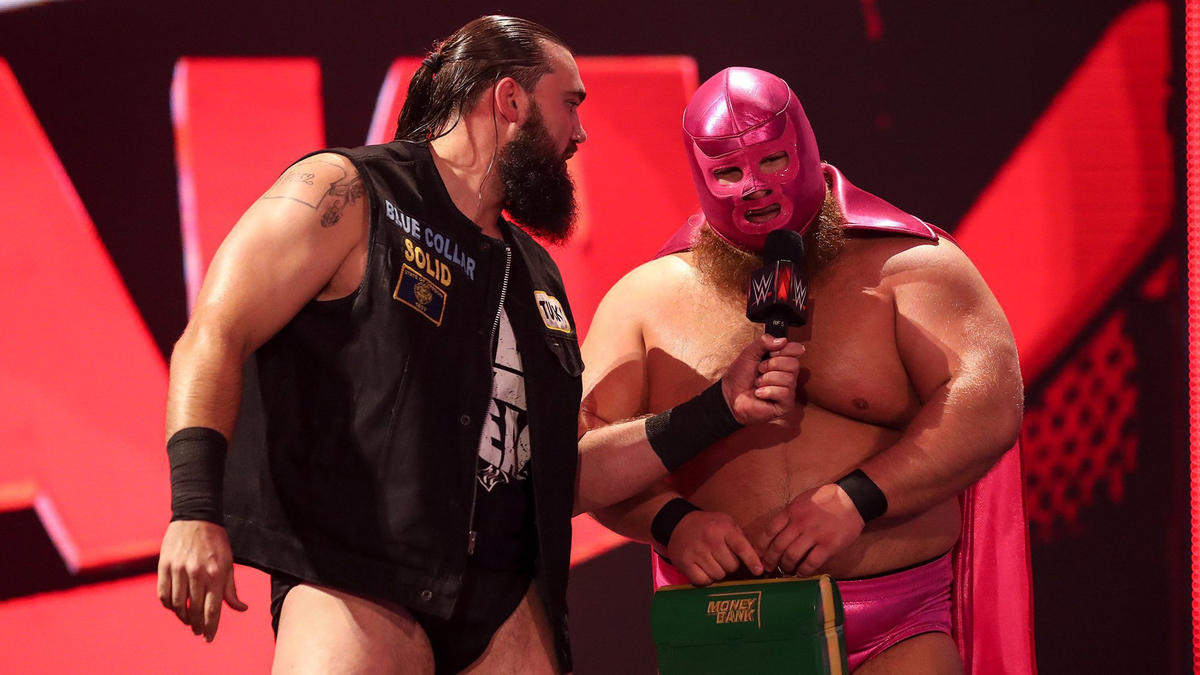 I haven’t been paying much attention to Heavy Machinery recently, but it turns out neither is creative. Otis and Tucker have been going back and forth with Miz and Morrison for what feels like a year now. Miz, Morrison, and Tucker were all drafted to Raw, leaving the caterpillar connoisseur alone on SmackDown. Never fear, as Tucker announced he had a new tag partner: El Gran Gordo. Otis in that popular pink mask made his way to the ring, and the took out Miz and Morrison. The match didn’t get very far before R-Truth and various undercard members interrupted in their chase for the 24/7 title. This allowed “Gordo” (but not the cool one from Lizzie McGuire) to hit a Vader Bomb and win. This was lame on a lot of levels- mostly because Otis is still Mr. Money in the Bank, but that hasn’t felt relevant since the night he won the briefcase. It’s a shame; Heavy Machinery had the fans, but their devotion to making Otis a 90s comedy star hurt his credibility. When he does cash in, it’s not looking like it’ll be a very memorable moment, regardless of the outcome. 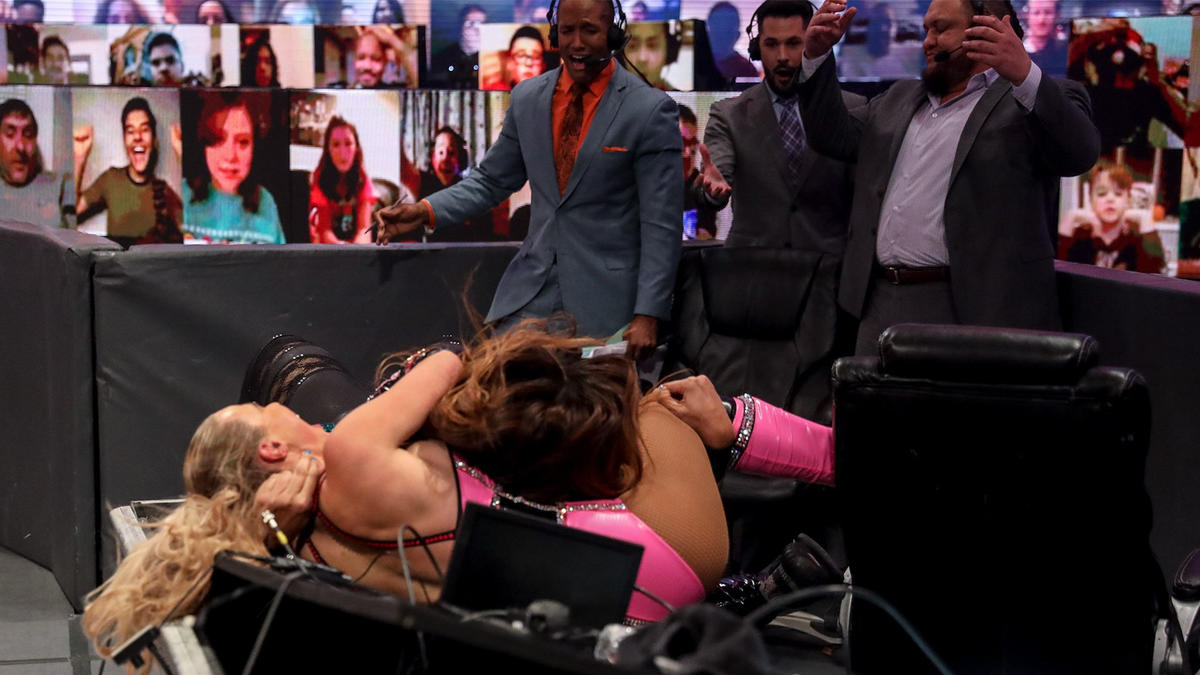 Lana was the surprise winner of a women’s battle royal last week, giving her the chance to challenge Asuka for the Raw women’s title. Unfortunately, this wasn’t quite the D3: The Mighty Ducks underdog story she may have hoped for, as her championship match lasted about a minute. She managed to escape from an early Asuka Lock and even got a takedown on The Empress. Unfortunately, she fell victim to another Asuka Lock and tapped in quick succession. Tough ending for the TikTok sensation. Post match, Nia Jax and Shayna Baszler attacked both Asuka and Lana, putting the Russian through yet another table before Asuka fought Baszler off and ran the duo away. Lana’s back has really had a rough couple of weeks. Asuka fighting the tag champs doesn’t really land with me, even if the concept of her and Lana teaming is hilariously appealing. Why did they end Asuka’s feud with Mickie James so soon? I could have watched the MILF lose another 3 matches.

Baszler and Jax went on to win a fatal four-way tag match against the Riott Squad, Mandy Rose and Dana Brooke, and Peyton Royce and Lacey Evans, which is a team that now exists, for some reason. I get that they’re putting the champs over as a big deal, but there’s not much more they can do now that they’ve run through every woman on the roster. 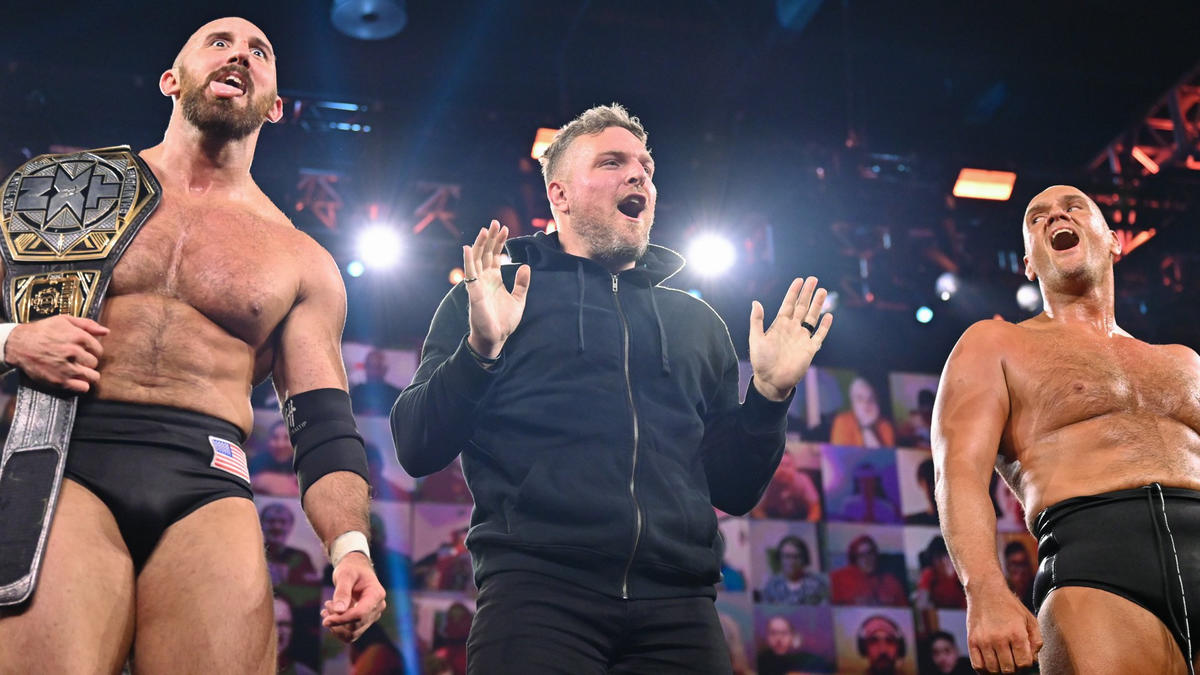 NXT’s main event was supposed to be Breezango defending their tag titles against Undisputed Era. Unfortunately the Era followed in the footsteps of Adam Cole, who was beaten up a few weeks ago at TakeOver 31, as Bobby Fish and Roderick Strong were both found attacked backstage. Kyle O’Reilly, being a true friend, decided to go to the hospital with his bros instead of finding another tag partner. This lead to Oney Lorcan and Danny Burch being put in the match as a replacement. Lorcan and Burch were a different match-up for Breezango, with their brawling style and hard hits. Breeze took down Lorcan and looked to make a comeback when a mysterious masked man ran in. He attacked Fandango, giving Burch the change to land a big uppercut and get the win for the team’s first tag titles. The man unmasked, revealing himself to be shorts stan and known Adam Cole enemy Pat McAfee. McAfee announced the new champs and called out UE, which means he was probably behind the whole ‘leaving them for dead backstage’ business. McAfee aligning with Lorcan and Burch is unexpected, but could be a good move for them. 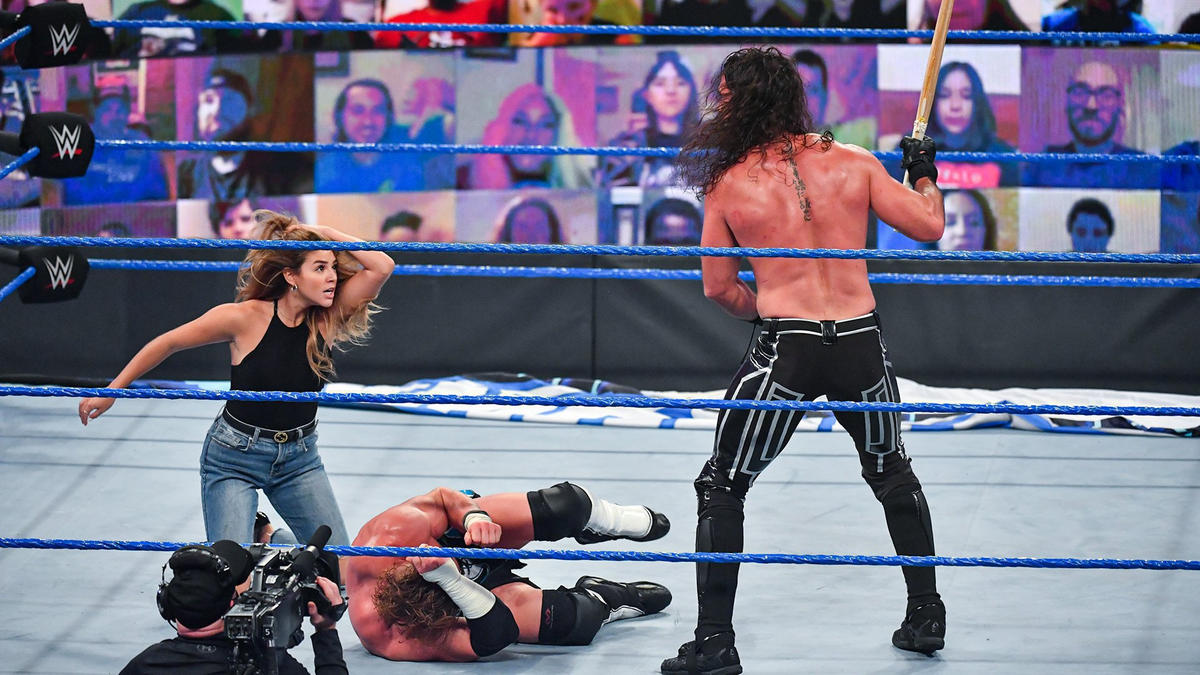 Murphy dug his cruiserweight shorts out of the closet and faced his old mentor in Seth Rollins. Murphy looked solid here against the end of the week Messiah, holding his own with a big right hand. The Mysterio’s were watching backstage, which sounds like a very lame family activity, but I guess it beats playing Cranium. Rollins took control and hit Murphy with a suicide dive, and we got to see Aalyah pull out her best “mildly concerned” face. Murphy avoided an attempt at a stomp, but couldn’t get Seth up for Murphy’s Law. Seth connected with a second stomp for the win, but he didn’t stop there. He grabbed a kendo stick under the ring, while Aalyah begged her dad to give his coworker a hand. Rey refused, so she ran out to the ring herself and very politely asked Seth to reconsider. After Murphy took a few shots, Aalyah climbed in the ring and physically protected him, forcing Seth to stop the attack. Dominik came out to yell at his sister, but Rollins went after him, so Rey joined the party to run him off. The Aalyah/Murphy angle is still uncomfortable, and Rollins/Dominik is old hat, but at least we got to see Murphy in shorts. Silver lining. 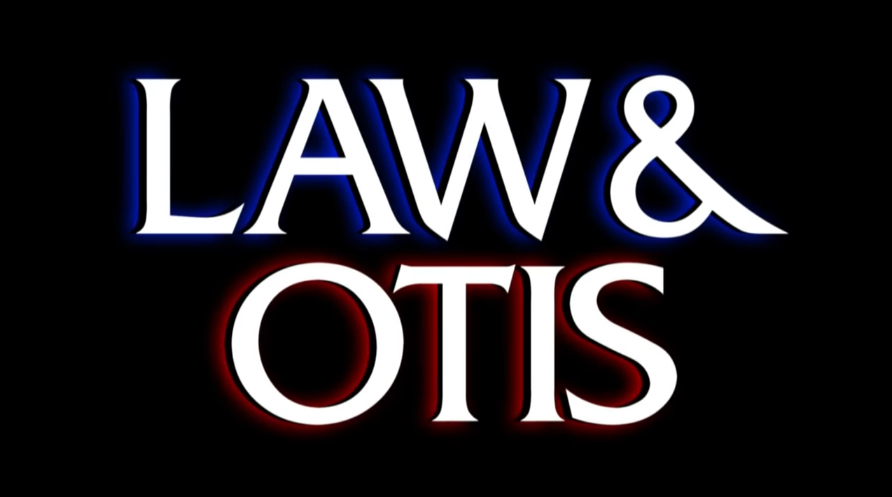 Remember when Raw and SmackDown had the same rosters and we got the same stuff twice a week? Thank God we’re going back to that in this riveting Miz and Morrison/Heavy Machinery feud. In further proof that someone on WWE creative definitely follows me on Twitter, SmackDown dropped a new segment entitled “Law and Otis” on Friday night. He faced Miz in wrestling court on the charge of creating an unsafe work environment, which is now explaining a lot of the results from WWE’s “internal investigations.” We had appearances from JBL as the judge and Ron Simmons as the bailiff, plus Teddy Long as a court stenographer. They cross examined Tucker as a character witness. It was a regular NBC drama out here. When things looked like they were going Otis’ way, Miz showed his trust in the justice system by bribing JBL with a case of cash, resulting in Otis defending his Money in the Bank contact against Miz at Hell in a Cell. That hopefully should be the end of this very lengthy feud between the two, but I’m not holding my breath. 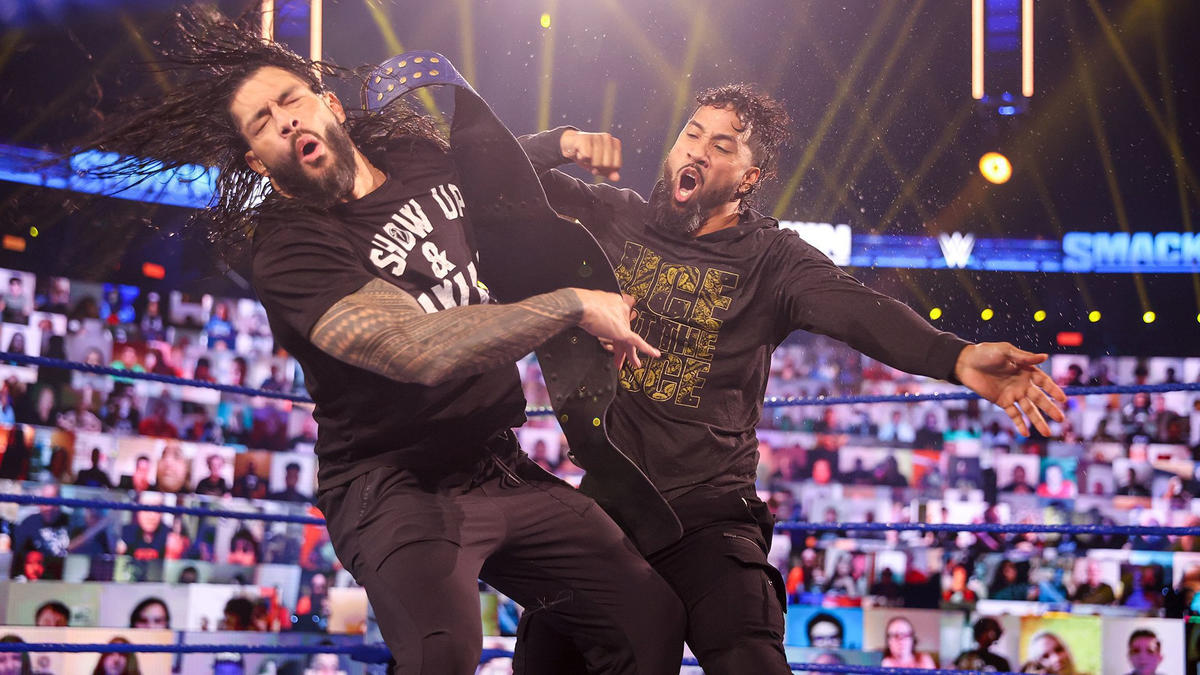 Roman came down to close out SmackDown with a promo about how he was going to kick his cousin’s ass, but Jey interrupted him on the tron, sitting at the head of a literal table. He revealed himself to actually be Jimmy, a plot stolen from an average episode of Sister, Sister, with Jey sneaking behind Reigns in the ring. He landed a big splash and ran off to join Jimmy at the big table. Roman got on the mic and upped the ante for Sunday; if he loses, he will give up his place as tribal chief and his top spot in WWE. But if Reigns wins, and Jey refuses to call him his chief, then Jimmy, Jey, their wives and even their kids would be out of the family forever. This sounds like a Russian novel I read in 9th grade, but it’s also one of the most engaging stories WWE has ran in some while. Uso and Reigns obviously have great chemistry, and playing on the real family dynamic has felt genuine for both men. Reigns is really excelling in his new role, and I have no doubt their match on Sunday will be another banger. 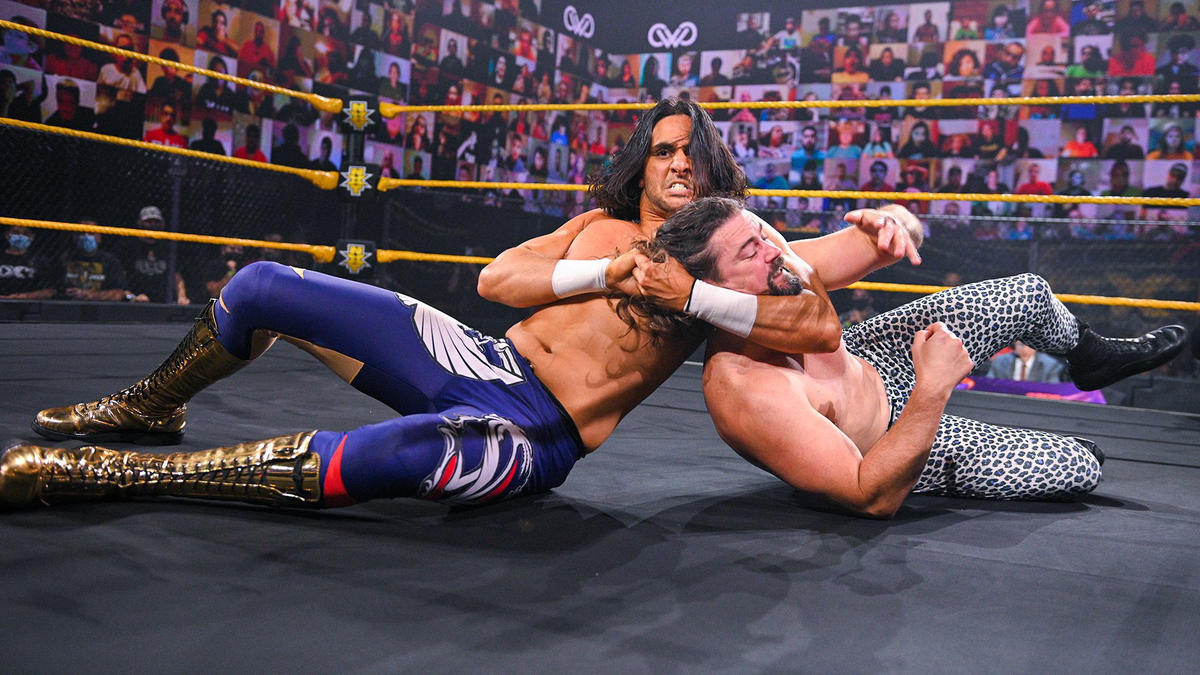 New Kid on the Block

Brian Kendrick continued to put over new 205 talent as he took on Mansoor this week for the right to have beautiful flowing locks on the purple brand. Mansoor fared better than newcomber Ashante Thee Adonis the other week, managing to keep up with Kendrick. A huge suplex and a Falcon Arrow almost got him the win, but Kendrick kicked out. Another failed pinning attempt and Kendrick got Mansoor in the Captain’s Hook, but he fought out. Kendrick landed a suplex but Mansoor reversed the pin into a roll-up to best the veteran. Post match, Kendrick offered his congratulations. Kendrick’s kind of been 205’s welcoming committee since it’s inception, and I wouldn’t mind seeing him take another younger superstar under his wing.

Is "Hangman" Adam Page the Voice of a Generation? (Part Three: Leaving Your Horse Behind)