WWE heard your outcries of “Is it genuinely worth it to hold wrestling during a global pandemic??” and answered with “What if said wrestling is kind of okay sometimes?” This week managed to deliver several very solid match-ups, and if you got up to pee during the sections that included a man currently being accused of sexual assault, you could just about enjoy yourself. Just about. 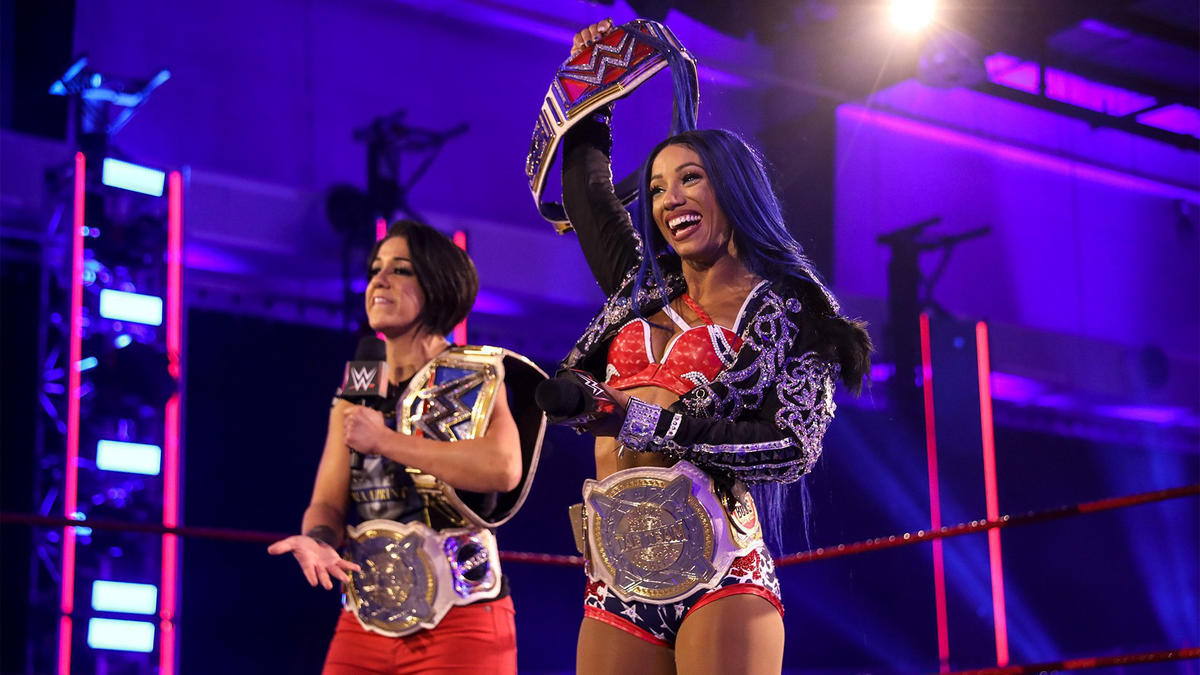 Pop your champagne and get out your finest snakeskin print jumpsuit, Two Belts Banks is a reality. Monday night gave us the Extreme Rules rematch of Asuka vs Sasha Banks, and it was just as good as their pay per view match. Before the bell rung, Kairi chased Bayley from ringside, ensuring there would be no role model shenanigans to assist Banks. She still did her absolute best to make it on her own, attempting to convince the ref Asuka had hit her with the title, to no luck. The wrestling between the two was fantastic; Sasha, for as great as she portrays a cowardly cheater, was on absolute fire here. Some killer drop kicks and suplexes to Asuka, and a giant splash that almost got the win. The Empress was able to get control, until the tron showed Bayley beating on Kairi backstage. Asuka stayed in the ring until Kairi called out for her- oh, my heart! Friendship triumphed over big red belts, and Asuka ran to save Kairi as she was counted out, and Banks became the official Raw Women’s Champion. I’m sure a lot of people are mad about this, but honestly, I’m loving Bayley and Sasha right now. Asuka is still a hero in her loss, and we get the deadly duo of Banks and Bayley running both shows. The heart of the story here is Asuka and Kairi’s relationship, which makes it work for me, honestly.

Post match, we saw Asuka get emotional as she left Kairi in the trainers room, marking her friend’s storyline farewell from WWE. The Pirate Princess has done a lot in her time with the company, and she’ll certainly be sorely missed. 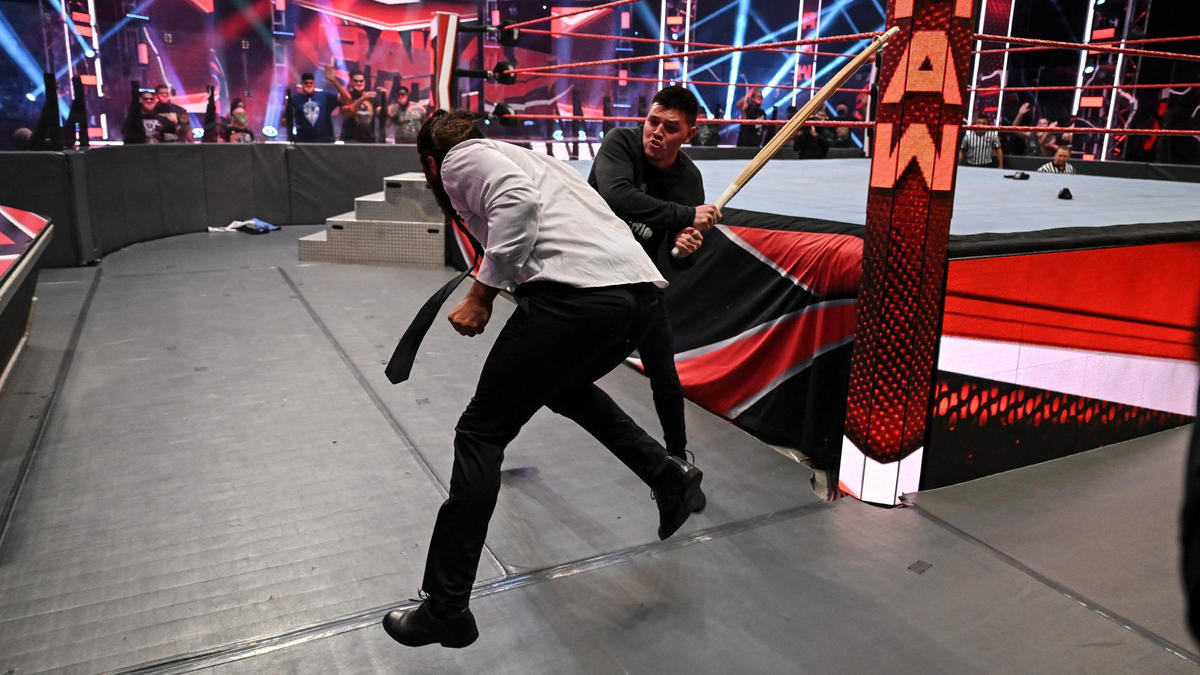 Dominick Mysterio vs Seth and Becky’s future kid is gonna be a real barn burner in 2040, assuming we as a species make it that far. But for now, we’ll settle for Rollins striving to take out the whole Mysterio family like some Game of Thrones s7 subplot. On Monday, Rollins invited Dominick to have a heart to heart about the whole “blinding his dad” thing, but, unsurprisingly, Dom wasn’t up to talking. He went after Seth until Murphy stepped in, and the two beat down on a 20 year old kid. Aleister Black attempted to give Dominick some back up, but with his already injured arm, he honestly wasn’t a ton of help. C’mon, Aleister. Seth delivered the Stomp to Black, the told Murphy that “you know what you have to do.” Murphy looked less than thrilled, but after some tough love from the Messiah, he followed in his leader’s footsteps and tried to drive Black’s eye into the steps. Luckily we were saved the sight of anyone puking as Dominick ran back to the ring with a kendo stick and chased the heels off. At least Black and Mysterio can have matching eye patches now! That’s pretty fun. Some building tension between Murphy and Rollins too; I guess brutally blinding your coworkers with your bare hands just isn’t for everybody. 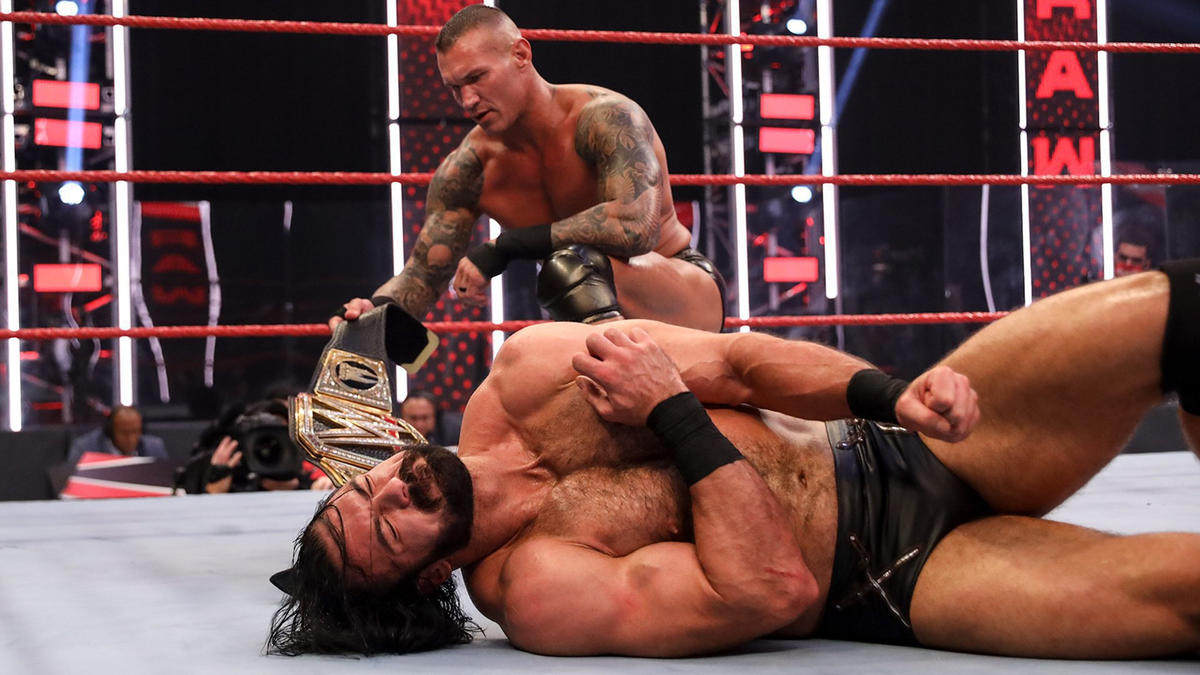 For the past few weeks, Ric Flair has been lending his star power to help newcomer Randy Orton get over with the nonexistent crowd. I guess it gave Orton the confidence he needed after beating the absolute shit out of a middle aged father a few months ago, because Monday night we saw him call out Drew McIntyre. The Viper kicked off the show to demand a title match with the WWE Champion. He said his accomplishments in WWE were greater than any other former stars, and that’s not even including being friends with the old dad who was clapping for him last week. He added that McIntyre doesn’t come close to his own track record, but he respects him for being built like a tree trunk and coming out in his undies anyway. Later in the night we saw Drew accept the challenge for SummerSlam, promising Randy that despite what many say on Twitter, he’s more than just a pretty face, washboard abs, and an admittedly receding hairline. To the surprise of no one, McIntyre went on to defeat Ziggler in Raw’s main event, in a match that pretty much checked all the boxes in my “sure, fine, whatever” checklist. It was just their Extreme Rules match, except this time both dudes were allowed to set up tables as quickly as their meaty hands could manage. Immediately after posing for the hard cam, McIntyre was RKO-d, and Randy stood tall to close the show. 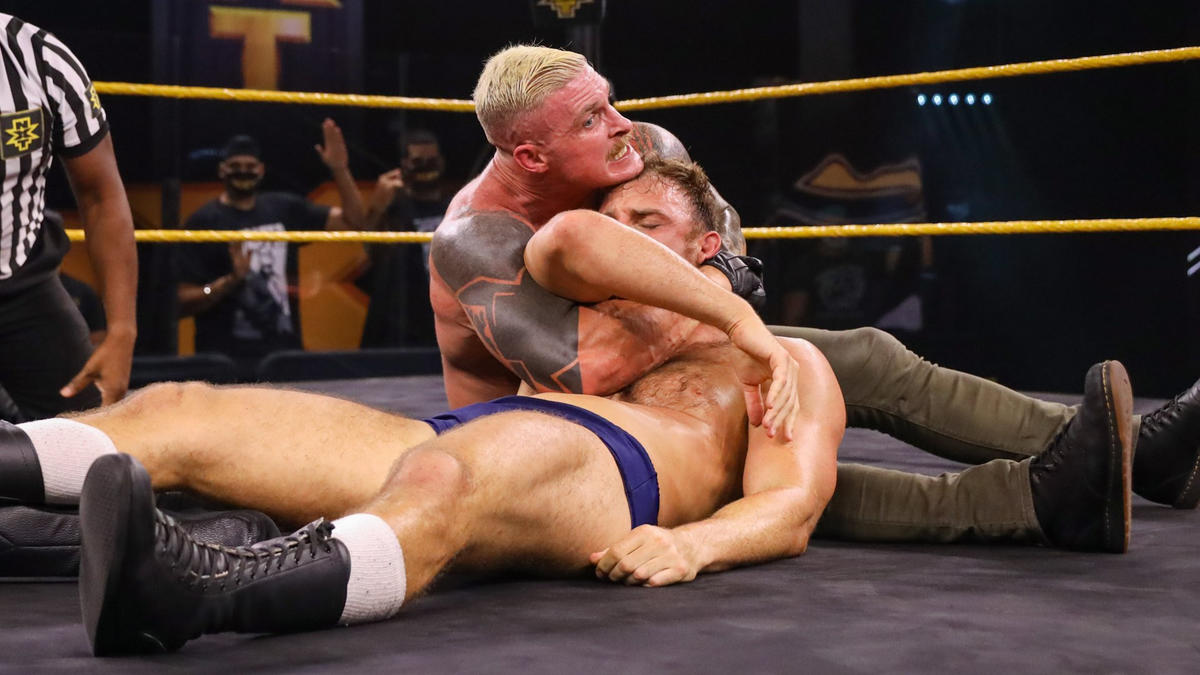 Lot of Beef in this Ring

I don’t totally get Dexter Lumis- maybe it’s the butcher apron, maybe it’s that up until a few weeks ago, I thought he and Karrion Kross were the same person. But his creeper in the night gimmick seems to be doing well, as it spooked both Finn Bálor and Timothy Thatcher in their triple threat match for a chance at the North American title. This was a very solid match up between three very different wrestlers, all of whom are pretty big deals in NXT at the moment. Thatcher has been submitting dudes left and right, while Lumis has staredowns every one in the PC, and Bálor is still riding high as the prodigal NXT son returned. Anyone of them would have been a good choice to win, but it was Lumis who ultimately got the victory and will go on to face Bronson Reed in a ladder match. We got some good high flying from Balor as the other two kept things in the ring, with both men going for their varying submission maneuvers. The final sequence here was designed to protect the losing competitors, and I think it worked; Thatcher had Bálor in a submission, but Finn refused to tap. Lumis then put Thather in Silence for the second time in the match, but Tim wouldn’t let go of his own submission. Bálor still wouldn’t give in, and Thatcher passed out to give Lumis the win. 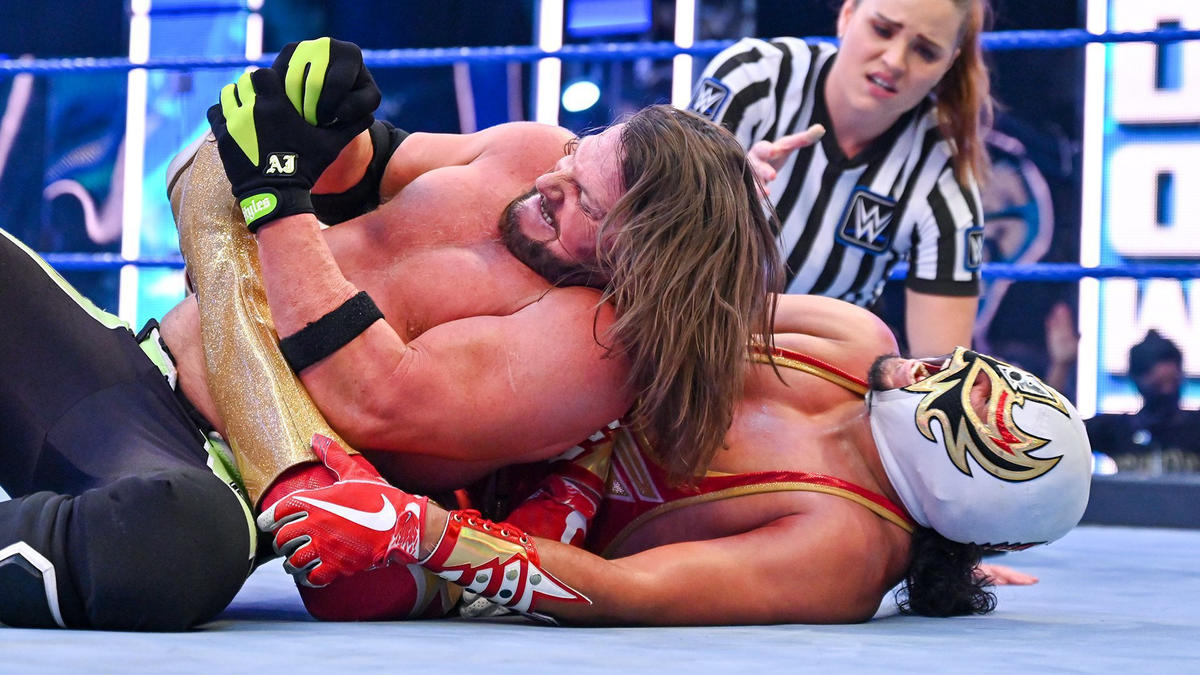 Unexpected Challenger Does the Expected

Last week, Gran Metalik was the surprise victory of a fatal four way to challenge for the Intercontinental Championship. This proved especially hard for AJ Styles, who had a whole week to ask his coworkers how to pronounce ‘Metalik,’ and still couldn’t nail it. While it never quite seemed believable that Metalik might win, mostly due to commentary putting him over as the biggest underdog in the history of the sport, he put on a good match against Styles. AJ targeted the leg, trying to keep his opponent from using the ropes. Metalik landed some quick offense, but was unable to fly like he normally does as his knee gave out. Metalik managed to avoid a Phenomenal Forearm, but was still got caught by Styles and tapped to the Calf Crusher. After the match, AJ laid out Dorado with the Styles Clash as well. This was a fine match up, but the knowledge that there was little to no way Gran Metalik was going to win kind of hurt the engagement. 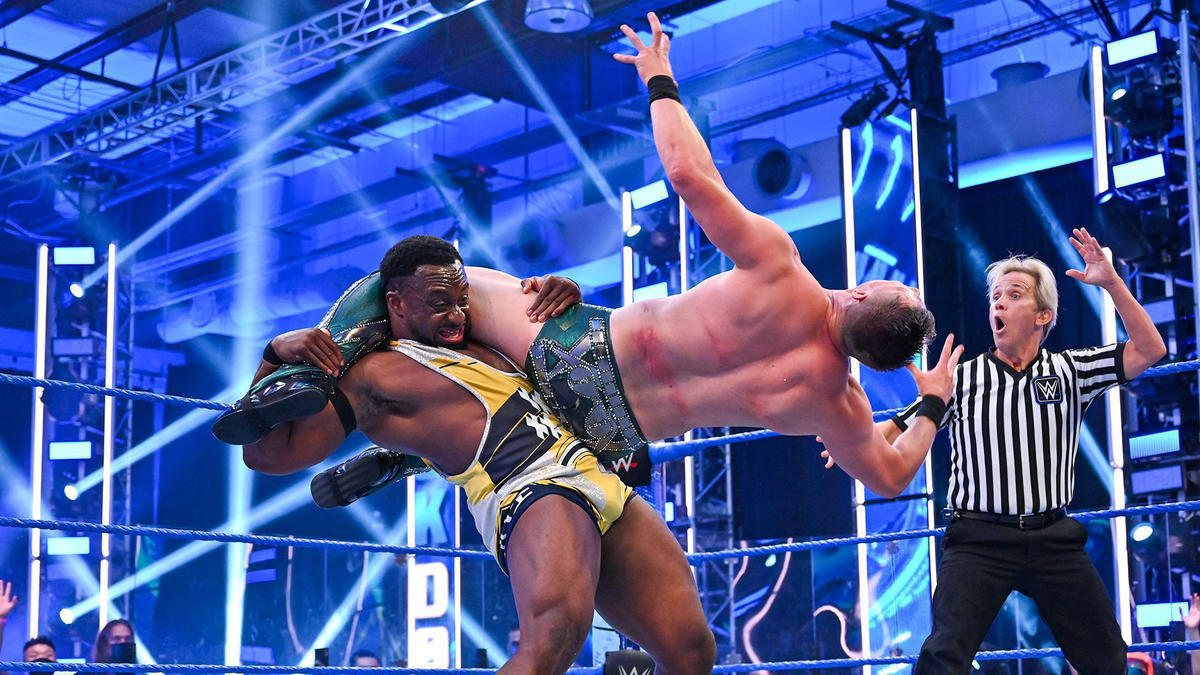 With Kofi Kingston’s announcement that he’ll be out for six weeks with a shoulder injury, Big E is the only active member of New Day right now. Despite being one of the more versatile big guys WWE’s had over the last few years, he hasn’t been given much of a shot outside of tag team runs with the New Day. He returned to singles competition against the Miz on SmackDown, proving that he doesn’t need Woods or Kingston to get the job done. He controlled Miz for the beginning of the match, until Morrison intervened with some parkour flip off the steps. Miz took over, trying to ground the bigger man, until he was thrown into the turnbuckle. Big E went for the Big Ending, but Miz hit him in the eye to land the Skullcrushing finale. Still able to kick out, he absorbed a series of Yes Kicks with the strength of a man who’s clearly spent time working on his chest. And, like, it’s really paid off. Look at him. Morrison got involved again, delivering a kick to Big E’s head, leading into another Skullcrushing Finale. Big E once again kicked out, and you had to imagine a huge pop here, something 13 NXT recruits and the people they’re FaceTiming probably can’t produce. The ref spotted Morrison on the apron and threw him out, giving E the chance to get Miz in the Stretch Muffler for a tap out. Longer and honestly more competitive than I was expecting here, but a great match for both guys. By all rights, Big E’s singles career can and should be huge. He has absolutely all the pieces to be the top guy; the only thing missing is my faith in WWE to pull it off. 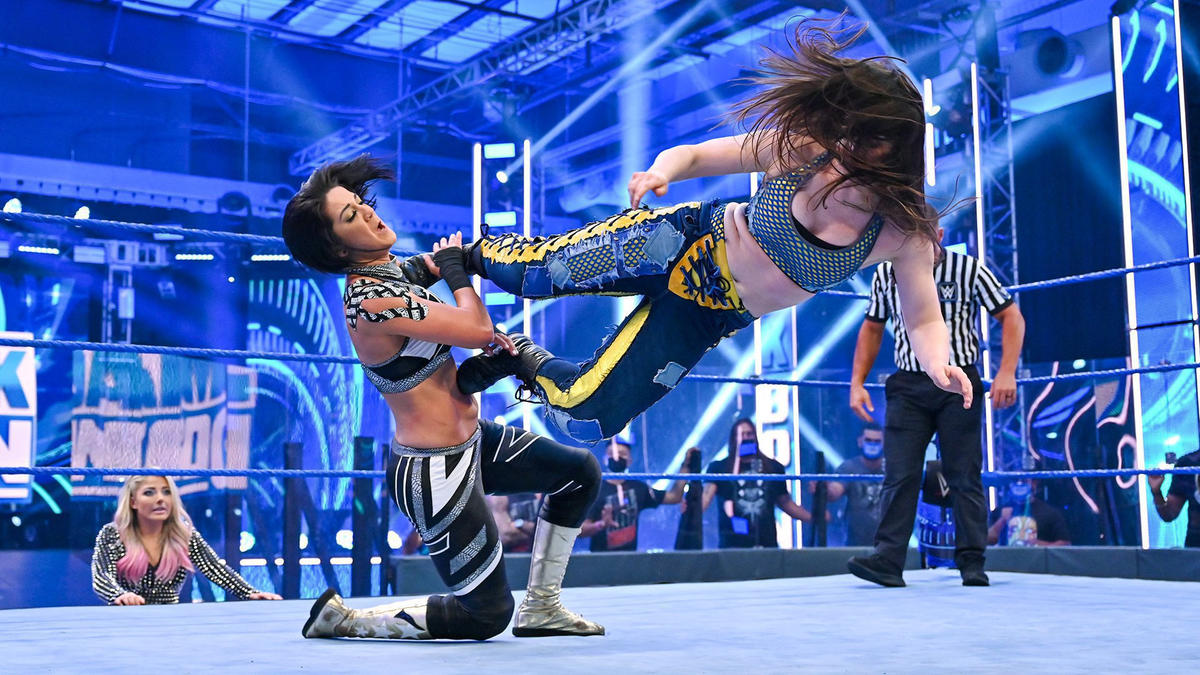 Another Win for Friendship (and for Fiendship)

Bayley and Nikki Cross gave us another Extreme Rules rematch in SmackDown’s main event. Bayley is approaching 300 days with the SD women’s title, which is crazy, because she somehow feels less tedious as a champion than Strowman does. This was mostly a rerun of their PPV match; Banks even tried to run back the ring hand off, only it didn’t work out this time. Bayley targeted Cross’ ribs, but Nikki bounced back and was able to knock the champ off. She landed a cross body, but couldn’t quite capitalize for the count. After a few back and forth pinning attempts, Bayley hit a neck breaker to retain. Congratulations to best friends everywhere! The Golden Role Models celebrated, as Cross was devastated in the ring.

The real drama came after the match, when Nikki pushed away Alexa Bliss as she attempted to comfort her partner. Alexa was left alone in the ring when all the lights went out, and- oh, man! It was red gel time again, baby! The Fiend appeared behind her, and then took a whole minute and a half to slowly circle around and choke her with the Mandible Claw. She honestly had plenty of time to move, but I guess she kind of wanted to see how far Triple H was gonna take this intergender business. With Strowman still lost in the swamp, it’s unclear exactly what the Fiend is after in attacking Bliss, as the big man seems unable to come to the aid of his former partner. Maybe Bray’s a diva stan after all.