The Royal Rumble go-homes amped up the action this week, delivering hard hitting questions like: What kind of mental scars did your father leave you with? How many times can the same match be rebooked? And are any British people to be trusted? Let’s take a look at the whole week in WWE: 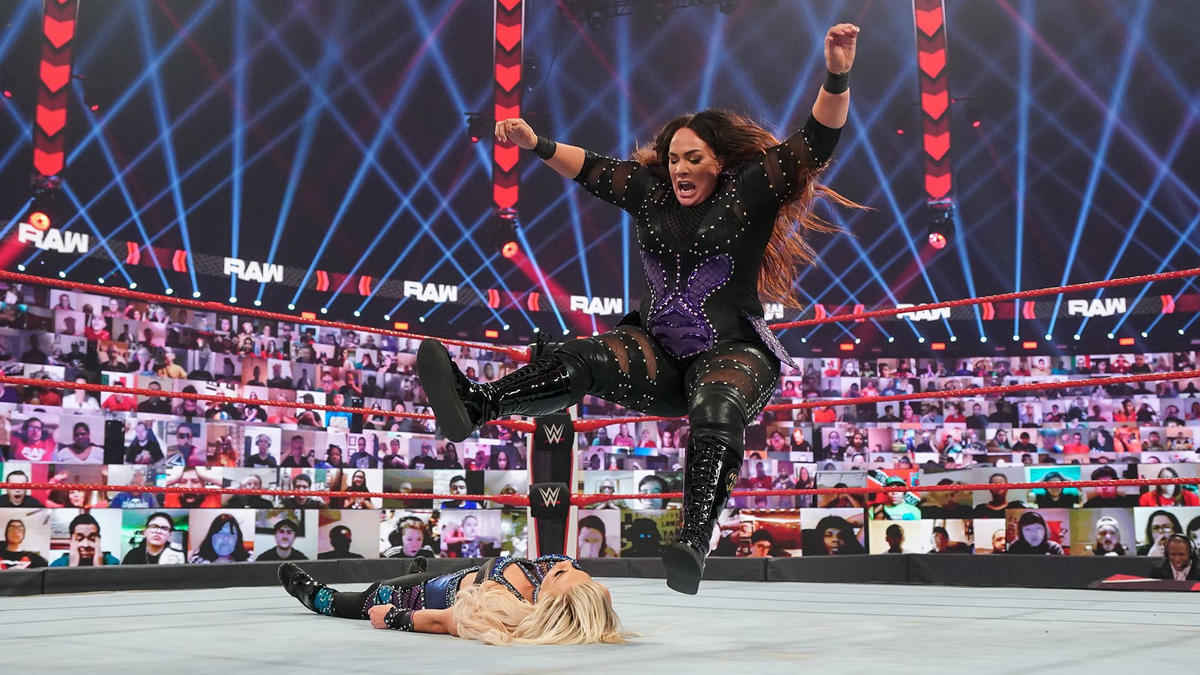 Monday night also saw WWE engage in their time honored tradition of making things way more complicated than they need to be. Charlotte Flair vs Shayna Baszler was advertised, which should have been fantastic in its own right. Unfortunately, it lasted about 45 seconds before Nia Jax broke up the Figure Four to cause a DQ. This lead to Mandy Rose and Dana Brooke coming down to even the odds, with Lacey Evans joining it to really round things out. As one could expect, this instead gave us a six man tag. This lasted about twice as long as the previous match, until Baszler got counted out. Adam Pearce was brought in and the whole thing started over again. That’s right, we had three separate matches start in the span of about five minutes, including commercials. When they actually got to wrestling, this was fine; Rose took out Evans, while Flair nailed Baszler with a spear. Brooke tagged in but found herself no match for The Irresistible Force, who hit a huge powerbomb and a leg drop to win. I get not wanting to give away Baszler vs Flair on free TV, but then why advertise it at all? The confusion and convoluted booking here didn’t help anyone out, and the actual match could have been much better served as a six woman tag from the beginning.

Later in the night, Charlotte walked in on Ric passing along some wrestling wisdom to Lacey Evans, and in her dressing room no less. She gently reminded him he was an old man, and there was no place for old men in WWE’s wrestling. At least not in their women’s divison, probably. Lacey came from behind to lay her out with the Women’s Right, and Ric was a little too quick to leave his kid rolling in pain on the floor. 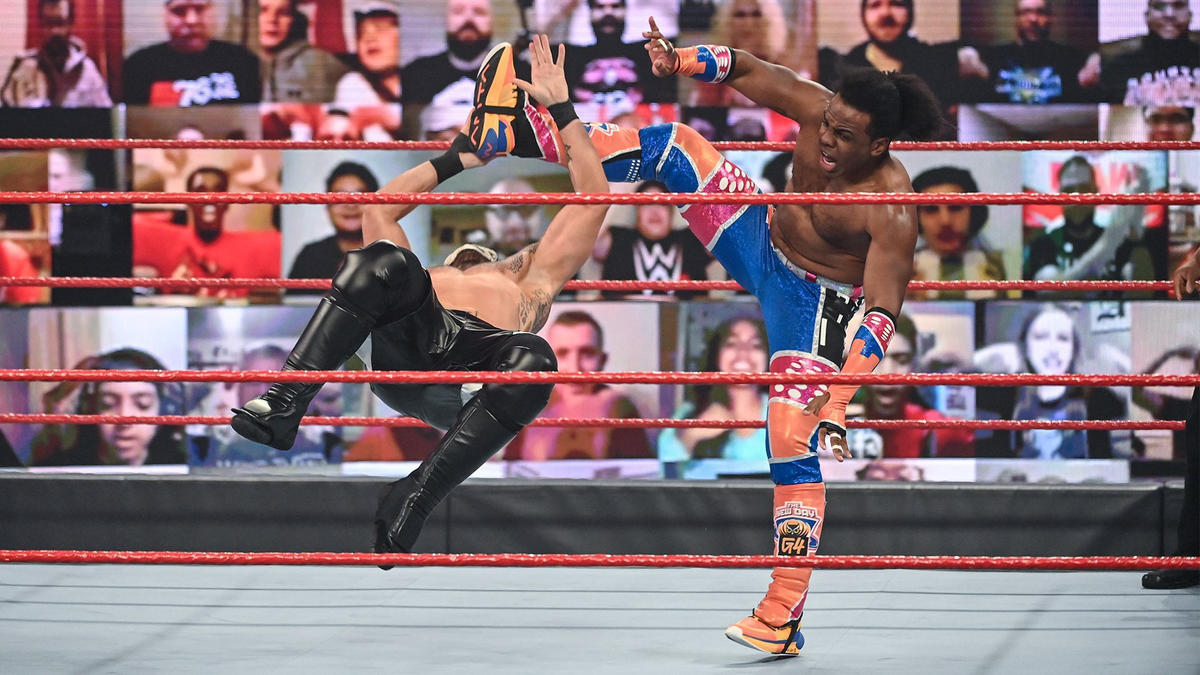 For as much as WWE clearly hasn’t known what to do with Retribution, drawing on the history between Mustafa Ali and Kofi Kingston was a great move. This week, he continued to torment Xavier Woods in Kingston’s absence, sending him against Slapjack. Woods was better prepared this week and managed to hit Slapjack with the Honor Roll for a near fall, followed by a shining wizard for the win, much to Ali’s displeasure. Immediately after, the rest of Retribution went after Woods, with T-Bar and Mace giving him a huge double choke slam. Ali directed them to bring him a chair, and teased a shot to Woods before taking a seat himself. He told Xavier he looked more like a peasant than a king of ring, and that with Kingston unable to compete in the Rumble, Ali himself would graciously step in the fulfill the role. Ali delivers every promo with incredible passion, and pairing him with The New Day makes Retribution as appealing as they’ve ever been. Let’s hope big stuff is in store for Ali come Sunday. 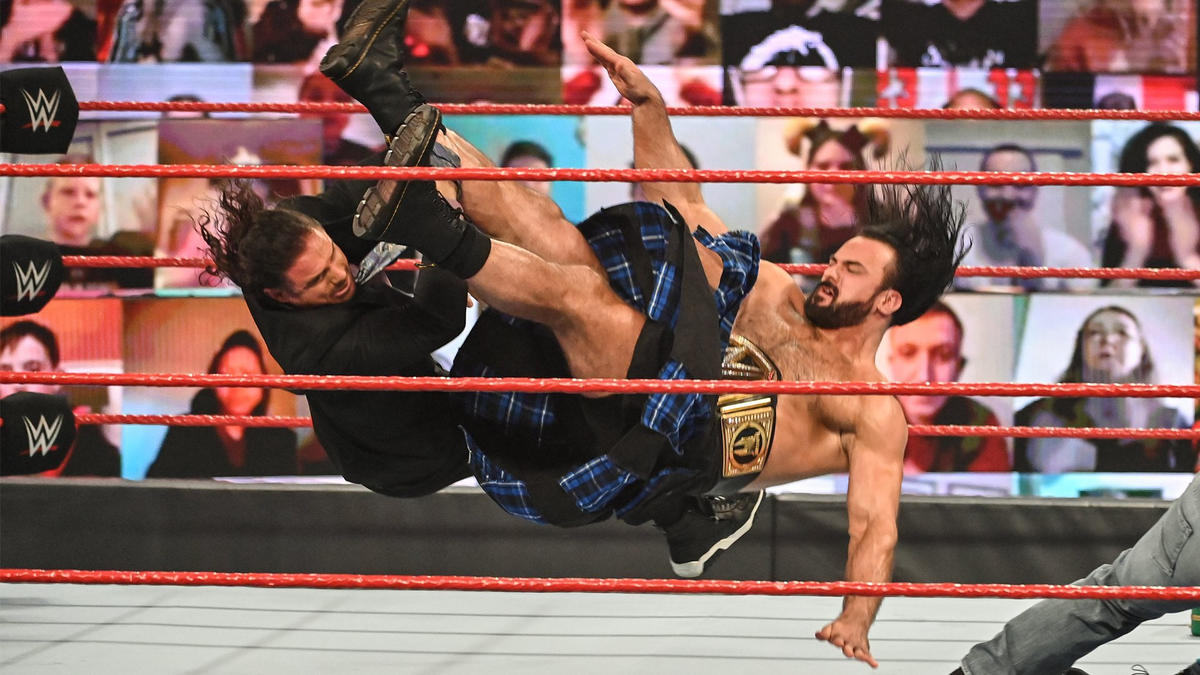 Drew McIntyre took COVID to Claymore Country and now he’s back on Raw to fight the real pandemic in this nation; white dudes in their 50s. McIntyre told us to mask up and take coronavirus very seriously, while also promoting an event featuring 60+ wrestlers to take place in a state that has struggled with some of the highest COVID cases for the better part of a year. It’s not his fault, but it is kind of funny to think about in a very sad, sad way. Anyway, The Miz and John Morrison interrupted and joked about how totally wild it would be for Miz to cash in on Sunday night. Then Goldberg stomped down to the ring with all the gusto of a man who eats regularly at Red Lobster and uttered his catchphrase to strike fear into a man who had just survived an extremely contagious virus during a global pandemic. McIntyre and Goldberg took out the heels with a combo spear and Claymore, then stood nose to nose as Drew held up the title. This was fine, even if I can’t say it got me too psyched for Sunday’s match. 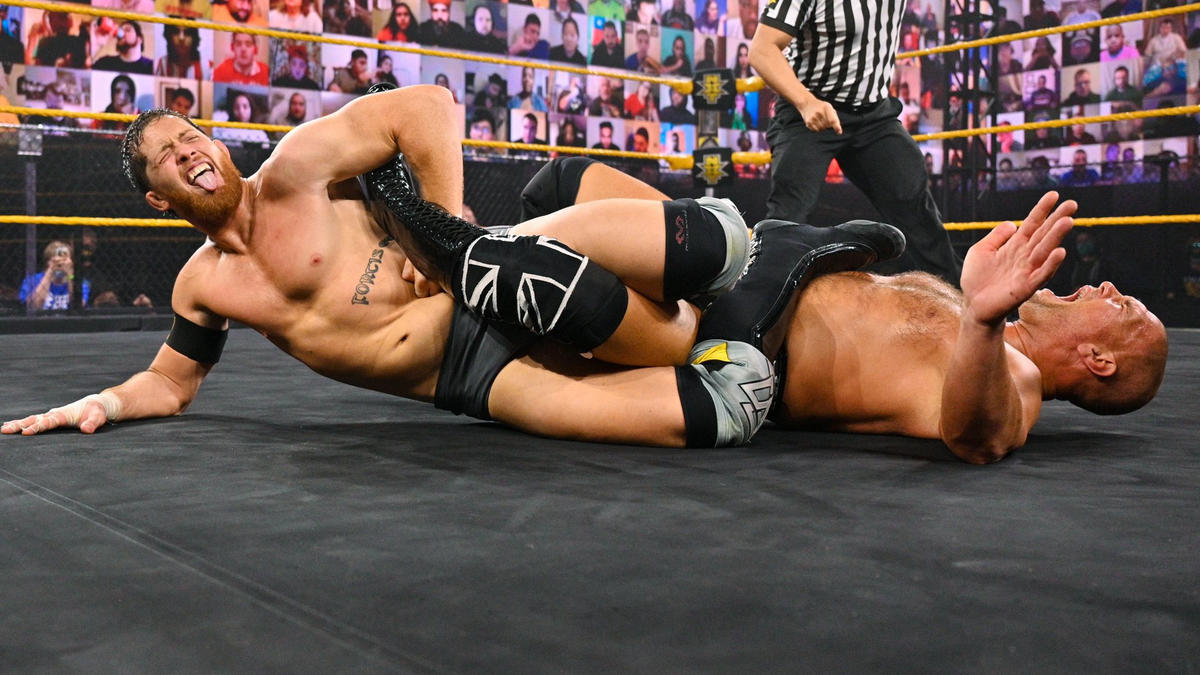 Enemy of My Angry British Enemy

A huge win for challengers to friends this week as NXT’s main event saw Finn Balor and Kyle O’Reilly team to take on tag champs Oney Lorcan and Danny Burch. Just when you thought you’d seen more tag matches than you cared for in the Dusty Cup, NXT brought us one that didn’t even count in the tournament. O’Reilly and Balor were a solid face team here, with the heels targeting O’Reilly’s injured jaw. Balor tagged in to get double teamed by Lorcan and Burch, with the champs taking control.He finally made the tag to Kyle who went wild, knocking down both men with strikes and taking it to Burch with a big forearm in the corner. He locked Danny in a leg submission to force a tap and win one for the good guys. Unfortunately, this lead to an attack from the heels, joined by Pete Dunne, who wiped out Balor and O’Reilly. Pete stomped on Balor’s face and snapped his fingers- in the bone breaking way, not the cool, getting your dog’s attention away. Roderick Strong and Adam Cole came out to defend their bud, but it was too little too late, as the damage was done. 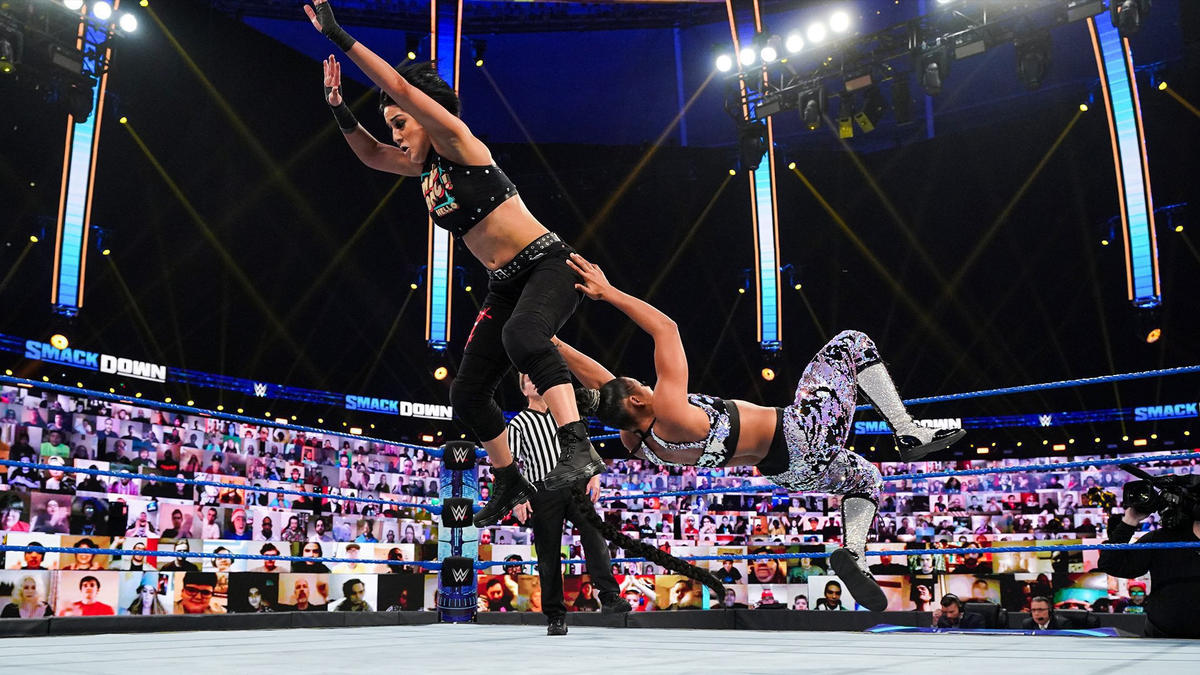 Bianca Belair and Bayley have been running through a very excellent women’s midcard feud, which is a sentence I rarely get to type. Last week, the two competed in an obstacle course that saw Belair carry the 330 lb Otis with ease. This week, they finally went one on one, with Bayley taking control early on. Bianca fought back with a suplex, but Bayley went for the hair. A beautiful standing moonsault from Belair almost put the Role Model away, but Bayley just got her foot on the bottom rope. They traded pins for a moment before Bianca connected with a big strike, but struggled to hoist up her opponent. Bayley charged the corner but Bianca sidestepped to send her into the turnbuckle, then managed to get the KOD to seal the deal. By all rights, Belair should skip out of the Rumble victorious; her work with Bayley has been fantastic, and it’s really allowed her to show off just how skilled she is. Remember when she didn’t do anything on Raw for like 4 months? Me neither, let’s never mention it again. 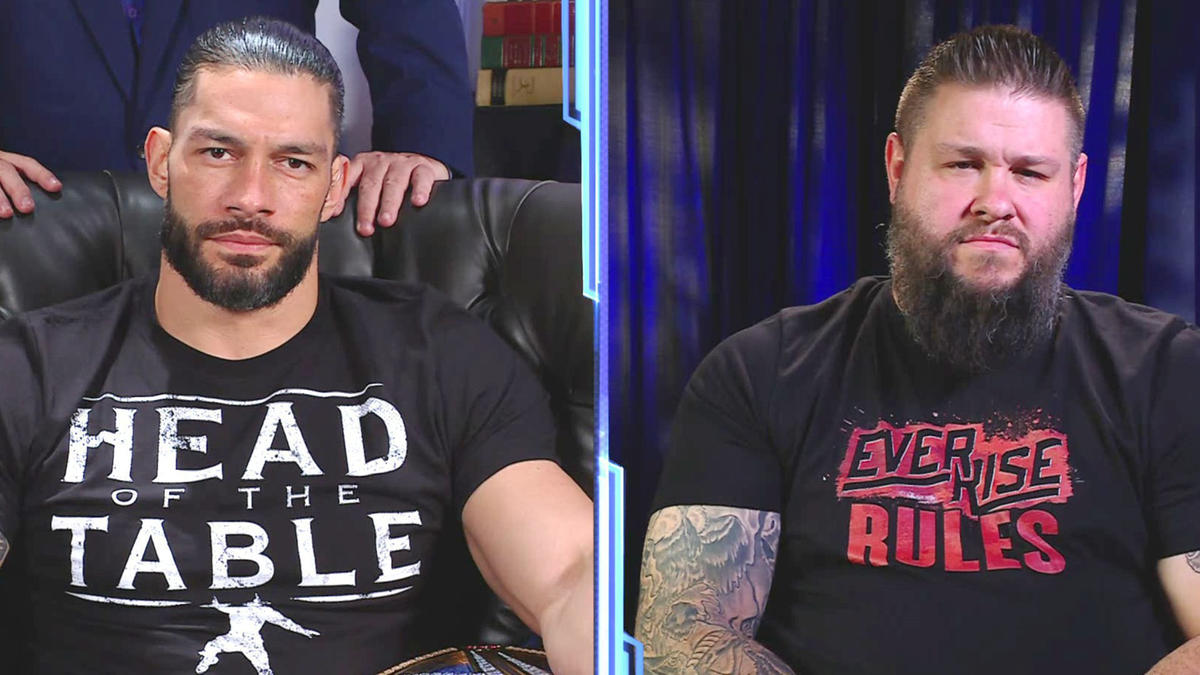 We got one last interview between Kevin a Owens and Roman Reigns before this Sunday’s Last Man Standing match. Noted cruiserweight stan Owens spotted an Ever-Rise shirt as he fielded Reigns questions about his dad and his family. Both Reigns and Owens cut incredible promos with quiet intensity, and the format here of the TV interview, which usually tends to make things fall a little flat, actually leant itself to that bubbling passion. Reigns called Owens a disgrace to his family, and promised that his grandfathers were acknowledging Roman as their tribal chief. KO fired back that Reigns was playing a “community theatre version of a mafia boss,” which is a great line. He riled himself up and began to yell at Reigns, who very calmly turned the screen off. Great stuff from both guys here; I can’t say enough how well Roman sells his whole persona. Maybe all the youtubers who cried for him to turn heel in 2015 were right. 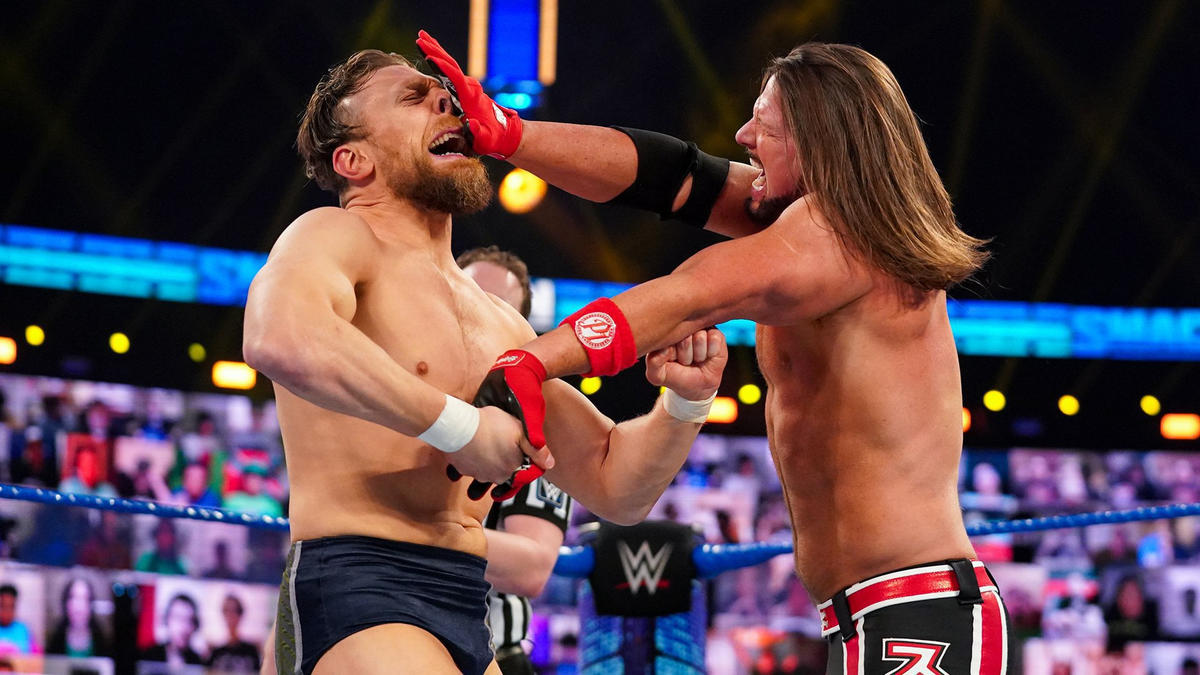 SmackDown continued its recent habit of letting Daniel Bryan just put on bangers with a match again AJ Styles. Bryan was interrupted by Styles earlier in the night as he once again tried to explain the rules of the Royal Rumble, with Styles citing the “quarterly brand to brand invitational” as the reason why he could hop over to SD. Bryan took control in the beginning, but a distraction from the arriving Sami Zayn and his documentary crew shifted things in Styles’ favor. Styles threw Bryan into the steps and went after his leg to set up for the calf crusher. Bryan grabbed the ropes to break it, then countered a Phenomenal Forearm into the Lebell Lock. Big E then came out to deck Sami just for the fun of it, and he, Zayn, and Cesaro began fighting ringside. Bryan hit a suicide dive onto everyone as Nakamura’s music hit, and I bet you can guess where this is going.

Another six man tag declared by new official Sonya Deville, who’s clearly seen an episode of WWE programming in her time. This gave us Nakamura vs Cesaro, which felt a little weird because last I checked they were evil BFFs, but here we are. Bryan and Big E double teamed Sami, but the crusader kicked out. Cesaro hit a massive uppercut on Big E, who came back with an uranage. Suddenly, Miz and Morrison ran down to the ring, followed by Otis, and this became a 5-on-4 handicap match. With a clear advantage, the heels took over and wiped out everyone on the apron, leaving Bryan alone in the ring. My head was already hurting, but the shenanigans only continued when Sheamus ran down to give the faces an extra boost. We then had a 5-on-5 proper, with a huge Brogue Kick to Sami scoring the win. Braun Strowman came out to run down the rest of the heels, and that was the show. Once again, a show is only as good as the needlessly complicated booking behind it. 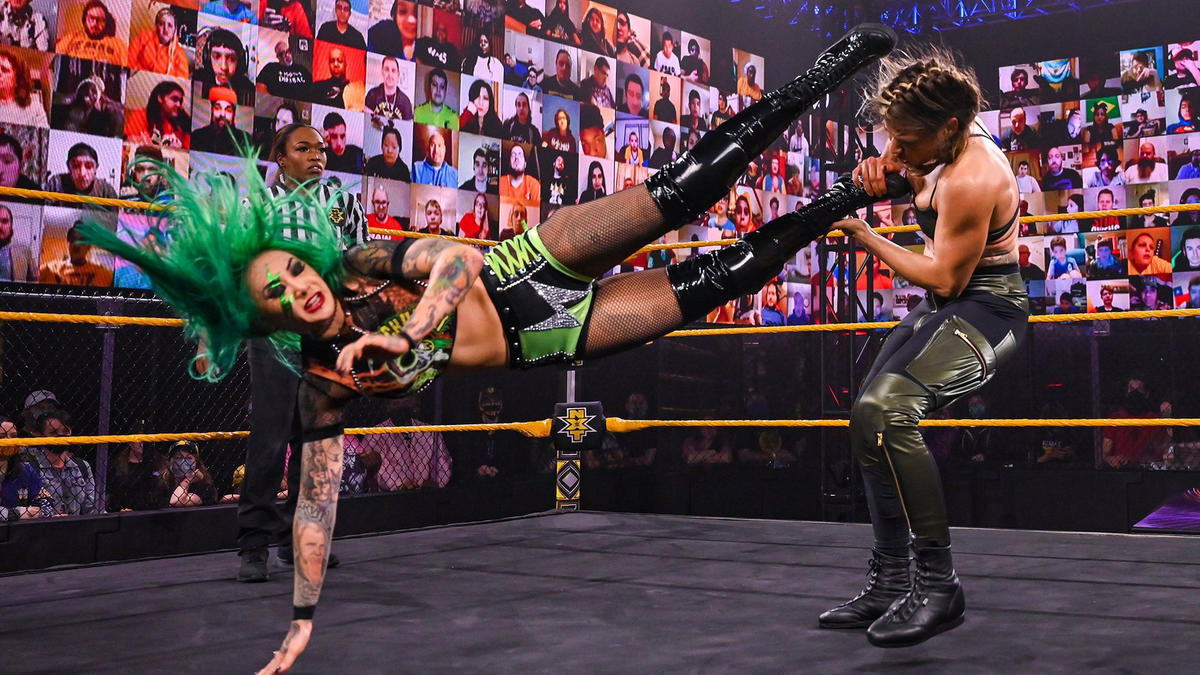 205 Live once again cracked that purple glass ceiling with another match in the Women’s Dusty Classic. Ember Moon and Shotzi Blackheart took on Marina Shafir and Zoey Stark, with Moon and Blackheart rocking some fantastic green glitter facepaint. It didn’t budge once during the match! Ladies, please drop the link. Some double team action from Blackheart and Moon dropped Stark, but she kicked out of a pin by Moon. Stark sent Ember into her corner, allowing her and Shafir to briefly take over. After a slap from Marina, Ember unloaded with strikes, then set up both Shafir and Stark to take running knees from Shotzi. Shafir briefly took over with her MMA style, but Shotzi landed an enzuigiri. She and Marina fought to the outside, while Moon countered a dropkick attempt from Stark into a Crossface to get the win. Moon and Blackheart will now face Candice LeRae and Indi Hartwell, which should be a lot of fun.