On the heels of a brutal War Games and continuing the build to a festive TLC, WWE tried to make things as merry and bright as possible with workplace fights, fingers in the throat, and a waste of perfectly cheap alcohol. 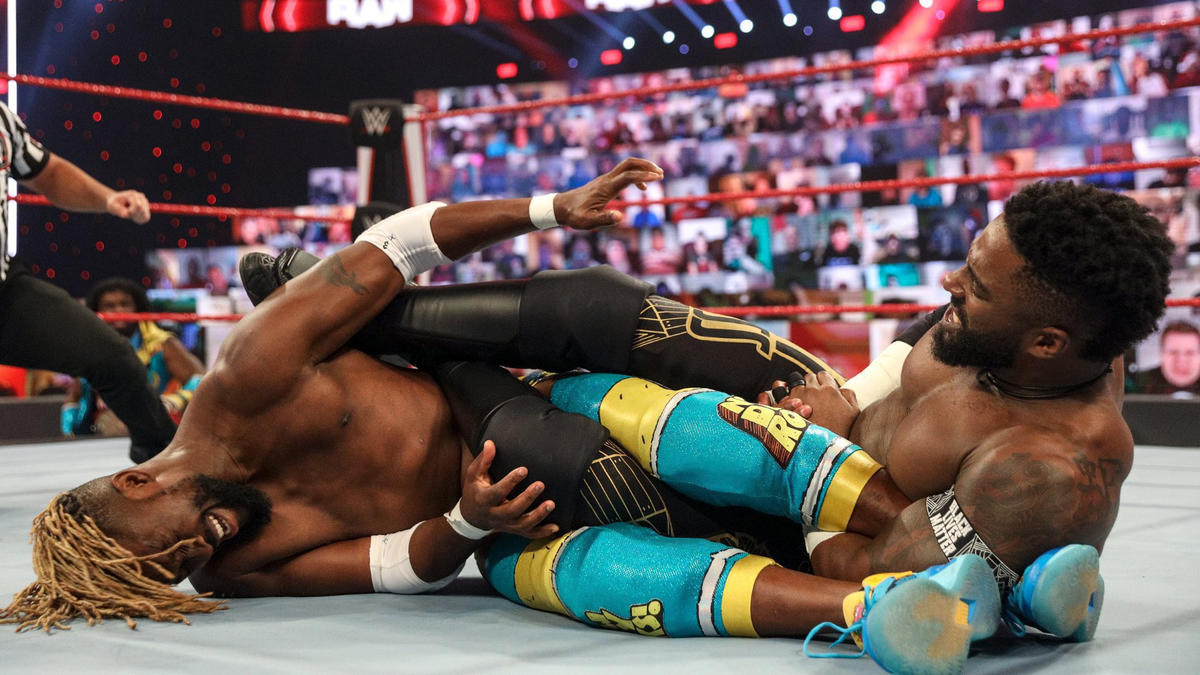 Cedric Alexander has been excelling with The Hurt Business; I gotta give big props to MVP for his work in making the stable still feel hugely important, despite WWE’s insistence that they only win one out of every four matches. This week’s Raw continued their feud with The New Day, and while the story here hasn’t always clicked, but there’s clearly enough talent in each of the men to sell just about anything.

First, we saw Kofi and Shelton go head to head, with Benjamin taking out his opponent’s knee early on. He looked to have things in order until Kofi ran him down outside the ring. Trouble in Paradise got Kingston the win, but Alexander refused to be left out. He hopped on the mic and demanded a match too. With MVP’s instructions, Alexander went after the knee as well, besting the tag champ as the fresher man. Kofi fell off the turnbuckle and hit his knee, allowing Cedric to take over and land the Lumbar Check.

This was a fair 50-50 booking and a showcase for Alexander, who really looked excellent. I don’t mind seeing these teams face off again at TLC. 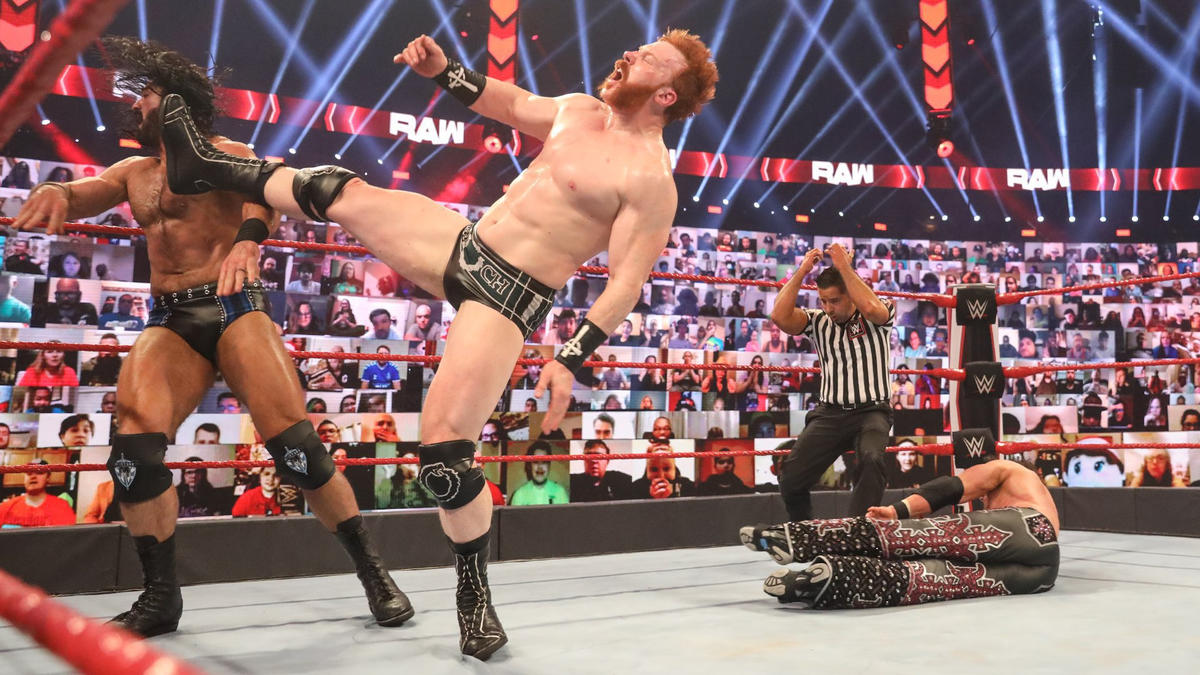 Friends to Enemies to Friends In 20 Minutes

After crashing Miz TV earlier in the night, McIntyre and Sheamus faced Styles, Miz, and Morrison in a handicap match designed to wreck their friendship.

Styles wasn’t interested in getting in with McIntyre, so Drew wiped out Morrison on the outside and beat on the Miz for continuing the talk show bit way past its expiration date. Styles tagged in after Miz and Morrison had battled back against McIntyre, taking advantage and going after Sheamus until he was hit with White Noise. McIntyre almost got a Claymore on Morrison, but Miz stepped in just in time. Confusion in the ring lead to a Brogue Kick wiping out Drew, and Styles landed a Phenomenal Forearm to pin Sheamus.

Backstage, Sheamus promised it was accidental, but McIntyre attacked him anyway. They fought into catering, with the roster cheering them on and/or yelling vaguely to stop. Pat Buck stepped in to break things up, but found himself the new target as Sheamus and McIntyre teamed up to stick it to the man. After beating up Buck, they walked off together to buy a pint, which feels like a tall task in the height of a pandemic. The drama between Drew and Sheamus is building, and it’ll be enjoyable to finally see the payoff. Poor Pat Buck takes another L from an employee. 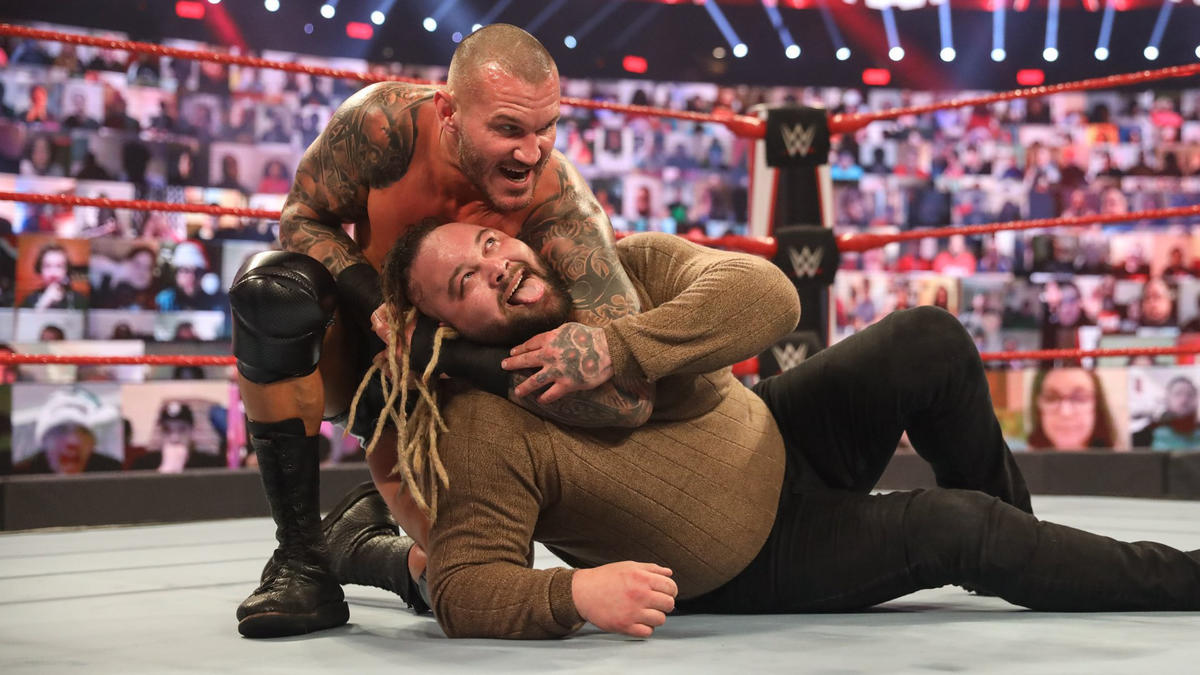 Randy Orton Eats His Words (And Some Fingers)

Randy kicked off Raw by calling out Wyatt for stealing all the decorations from Spirit Halloween and requesting a match with the man before he faced The Fiend. The main event gave us just that, with Wyatt in full Firefly Fun House sweater mode.

After a hot start, Wyatt found himself in trouble, but didn’t seem to be very bothered by Orton’s strikes. He giggled as Orton threw him around the ring, having the time of his life. Wyatt eventually came back against the Viper with a DDT, but Randy escaped Sister Abigail. After a vintage draping DDT, Orton hit an RKO, but the lights cut out. The Fiend appeared, chilling next to Randy, to get him in the mandible claw and choke him out. Raw faded out over Randy’s lifeless body, and that was our show.

The Fiend and Orton have certainly shaken things up in the past few weeks, and the absence of Alexa Bliss helped further Orton’s theory that The Fiend only cares about people who rock overalls. Tune in next week to see if Randy returns to his arsonist ways. 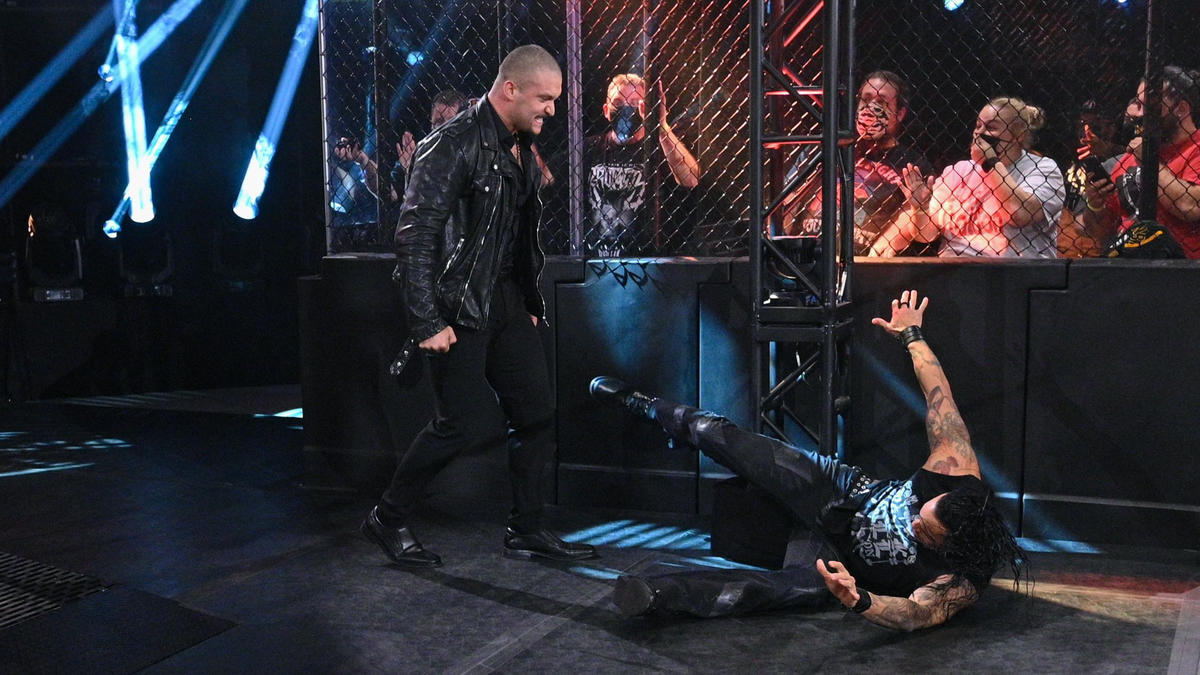 Finn Balor kicked off NXT Wednesday night by talking about how teamwork is for suckers and now that WarGames is over, it was time to return to the individualistic, capitalistic outlook that’s doomed this country. He was interrupted by Pete Dunne, embarrassingly wearing the exact same outfit as Finn himself. Pete offered himself up as a challenger, but Kyle O’Reilly came out to prove that he, too, could rock straight leg stonewash grey jeans and an absolutely insane faux hawk. Damien Priest joined the crowd, and all 3 men argued in the ring while Finn decided to call it a night.

As Finn was ditching the party early, Karrion Kross’ theme hit, and Scarlett came out sporting a bodysuit with a ton of shoulder spikes. Like, arguably more than any one outfit needs. Which is, at max, maybe 5. Finn told her to tell her boy he would be ready whenever Karrion dropped the whole clock schtick. Scarlett showed off her evil grin, but Damien Priest piped up and requested some of that Kross fight too. He asked if Kross ever handled his own business or if Scarlett and her many pleather bodysuits do all the work.

While Scarlett vs. Priest would have probably been great, we instead saw Kross make his return later in the night to teach Priest a lesson. Priest was calling out Johnny Gargano for being really bad about picking friends and hanging out with Austin Theory when Kross jumped him from behind. He threw Priest around the ramp for a minute before heading back to the parking lot and driving off in a black BMW with Scarlett, just like the end of Grease.

Kross’ return feels like it should pack a punch, but I still can’t find any substance under the spooky exterior. Call me if we get the Smokeshow challenging Finn, though. 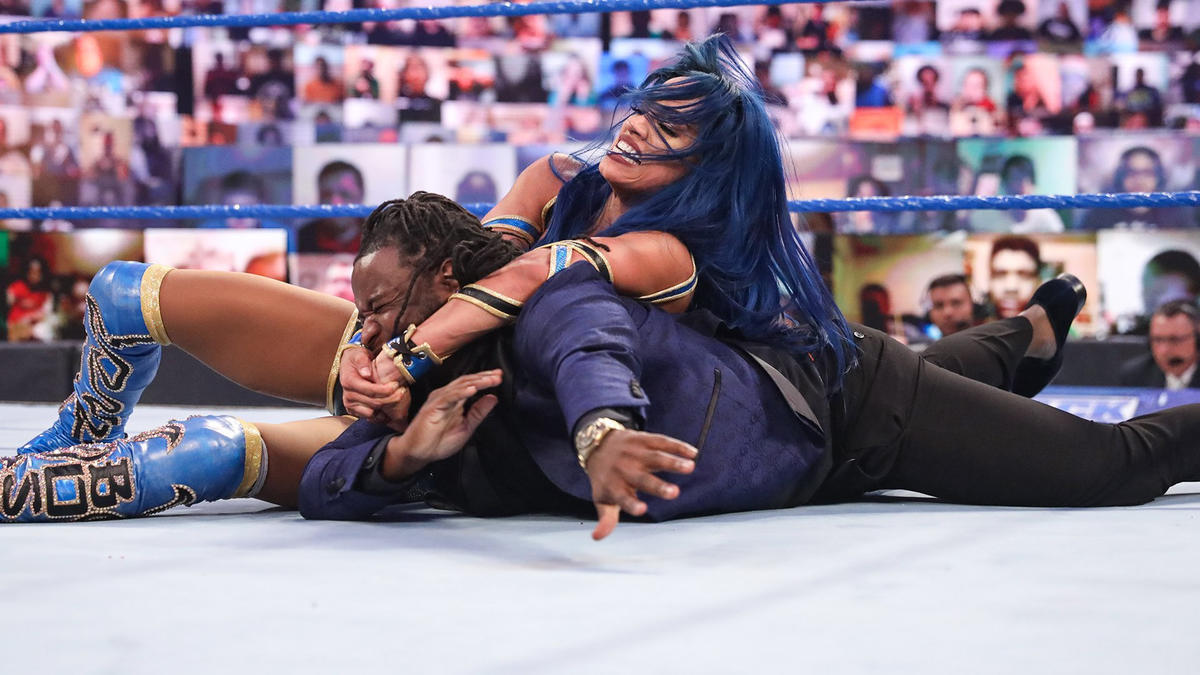 A Princess, a Boss, and a Glorified Intern

Sasha and Carmella started things off with a scheduled contract signing, which went off as well as any other contract signing in wrestling history. Carmella revealed she had stolen the contract before Sasha could sign, but she had her sommelier (Michael Cole’s label, not mine) deliver it. After trading insults and references to Netflix TV shows, Sasha offered Carmella a chance at the title tonight, then hit the sommelier with a Backstabber. I’m gonna guess he’s not paid enough to take bumps from the Boss, but he did it like a champ anyway.

Our main event was a preview for the Smackdown Women’s Championship match at TLC, and Carmella came out very strong against Banks. While Carmella has certainly improved, and her character and promo skills remain very entertaining, she’s not quite on the in-ring level of, say, Sasha vs. Asuka. Still, she looked good here, taking it to Banks early on. She got her in the Code of Silence, but Sasha was able to escape and secure the Bank Statement. Carmella’s sommelier (although I’m beginning to suspect this man is not qualified) broke it up, and Sasha waled on Carmella in the corner. She ignored the ref’s demands to stop and caused a DQ, giving Carmella the win. Immediately after, Carmella shoved Banks into a champagne bucket and broke a bottle over her back. 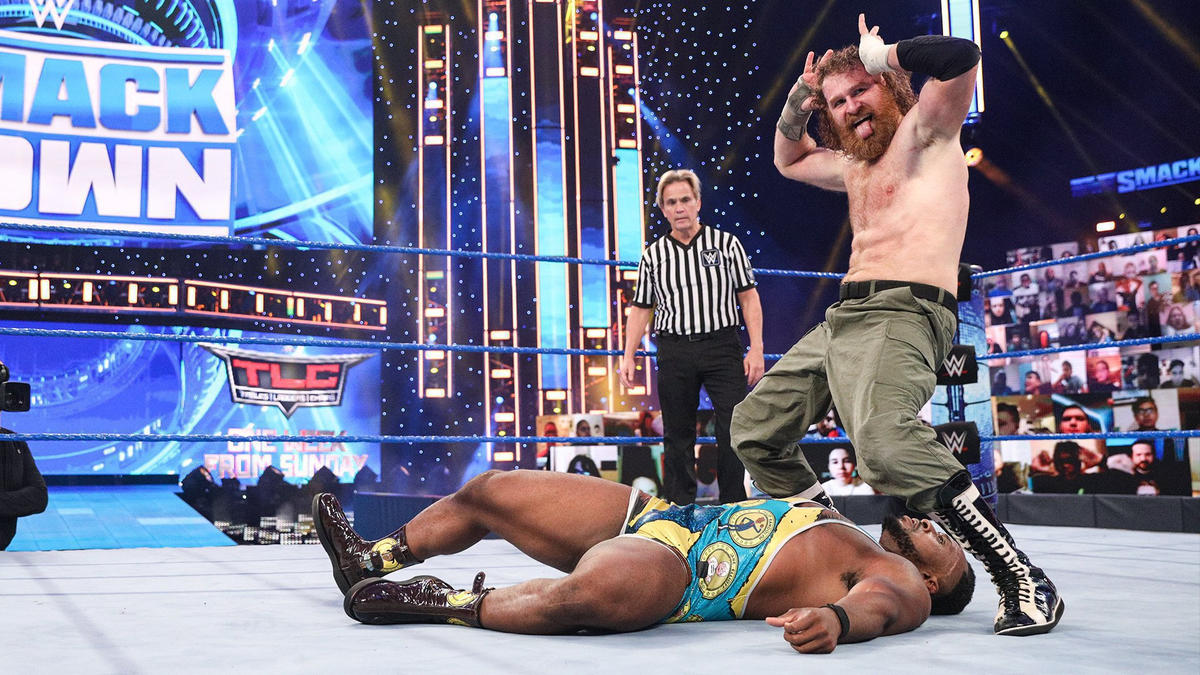 After bemoaning that WWE doesn’t carry an official Sami Zayn shirt, Big E and Apollo made the IC champ his own custom t-shirt. Sami then took offense to modern art and went one on one with Big E. Who, for the corporate shill record, does have a new t-shirt.

Sami made sure to confirm this was a non-title match at the start, before Big E got him in a headlock. An elbow and a splash seemed like E was in control, but we returned from the exact same commercials Fox plays every goddamn week to see Sami using the rope to choke Big E. Even with half the lung capacity, E still came back with a belly to belly and planted Sami. Another splash sent the champ rolling to the outside, but Big E didn’t let him get away easy. Sami poked the eyes to escape from Big E’s beefy shoulders, but still got hit with a Rock Bottom.

Sami grabbed at his hand and told ref Charles Robinson that his carpal tunnel was flaring up and he needed to get home. He then used the injured hand to nail Big E in the face. Big E chased Sami outside and both men ran under the ring. Sami got out first and delivered a few stomps to E before sliding back inside just before 10, letting Big E get counted out. This was a fun time between two of SmackDown’s most entertaining, and an IC title run for E suddenly looks very, very appealing. 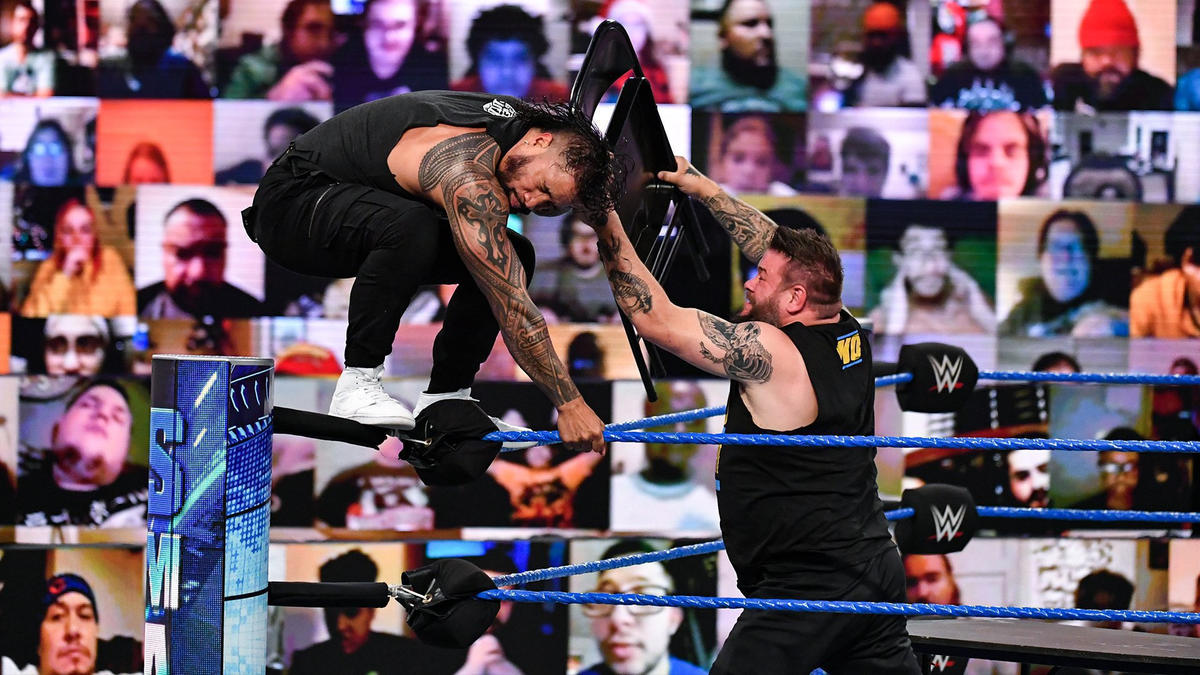 Things somehow got even more personal between Kevin Owens, Roman Reigns, and Jey Uso. Paul Heyman, meanwhile, is somehow steering clear of most beef, like that one cousin everyone loves. Owens came to the ring and brought out tables, ladders, and even chairs in a subtle nod to the upcoming show. He called them his special friends and said how they were going to help him beat Reigns at TLC. Unlike Roman, he didn’t have family members in the business to do his bidding, just a really cool wife and great kids.

Jey Uso attacked Kevin from behind, slamming him with a chair and raining punches. He tried to set Owens up on the table, but Kevin came back with a chair shot of his own and sent Jey through a table. Roman and Heyman came out to briefly remind Owens they weren’t interested yet, prompting Kevin to chase them backstage. Roman managed to jump KO and beat him down, then turned to the camera to tell his wife and family to try and talk some sense into Kevin before it becomes a very rough holiday in the Owens household.

Reigns continues to impress as the cold heel, and rock bottom continues to lower for Jey Uso. Despite knowing the outcome of the feud pretty clearly, KO is an excellent challenger for Reigns, and his passion in every promo is palpable. I hope next week we see Owen and Junior the cat show up and give Roman the old one-two. 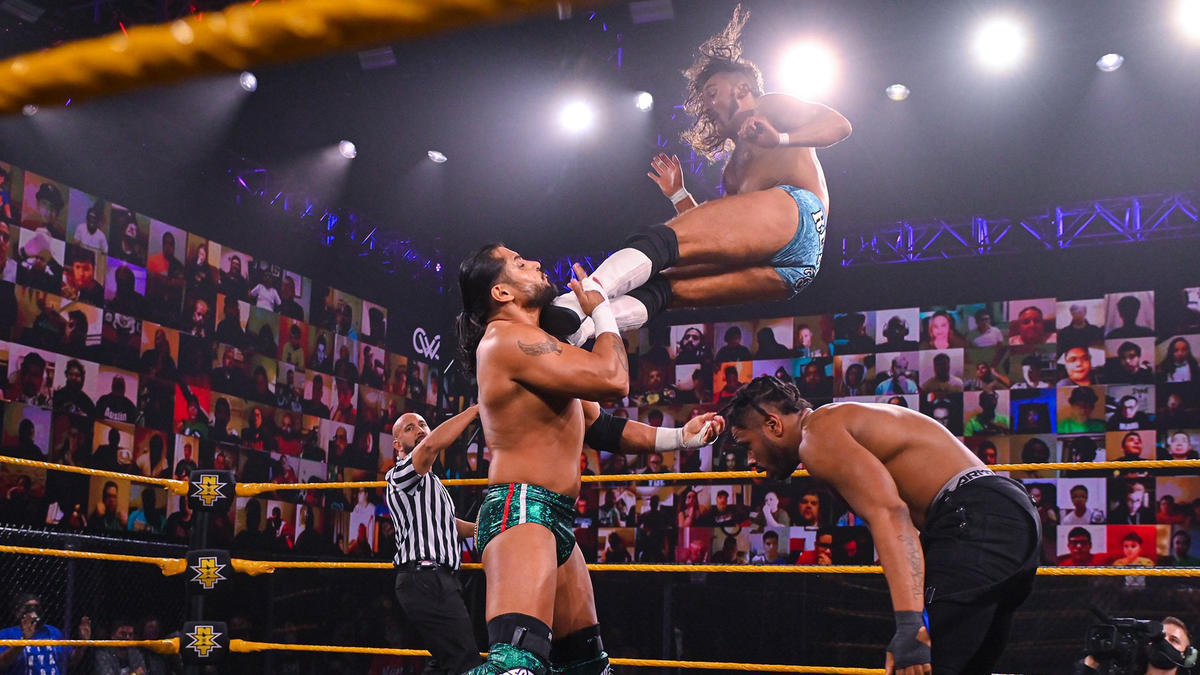 On 205 Live, Curt Stallion remains the number one contender to a match that has been floating in limbo for about a month now. Maybe this is a metaphor for the cruiserweight brand.

Stallion teamed with August Grey and Ashante Thee Adonis to take on Legado Del Fantasma in this week’s main event. Legado tried to use their team advantage early on, with Wilde running interference for Raul Mendoza, but Adonis took care of the whole group. Stallion tagged in and tried to go after Escobar, but Mendoza cut him off. The heels made quick tags to beat down Stallion, including a hard chop from Escobar to his next challenger. Stallion got the tag to Grey, who took down Wilde with a neck breaker. Escobar tripped him up on the apron and sent Grey toppling to the floor, letting Wilde take over.

Grey finally managed a tag to Stallion, who took out Mendoza and nailed Wilde with a dropkick. Things broke down with all six men in the ring, Adonis trapping Mendoza on the apron and allowing Stallion to roll up Wilde for the win. Legado immediately went after Stallion again, but his new BFFs backed him up to run the trio off. Escobar and Stallion should be a solid matchup, but who knows when that’s gonna happen.