I admire WWE’s attempt to make Fastlane remotely intriguing this year; it tends to usually fall flat, given the unfortunate task of leading into Mania without making any changes that lead to ticket refunds. Still, this week secured us Bryan vs Reigns again, which I’ll never complain about, and gave way to a new WWE Champion. The WrestleMania landscape could look very different by the end of the month, although I’d wager the site of more than four wrestling fans sitting close together is still going to make me recoil just a bit. 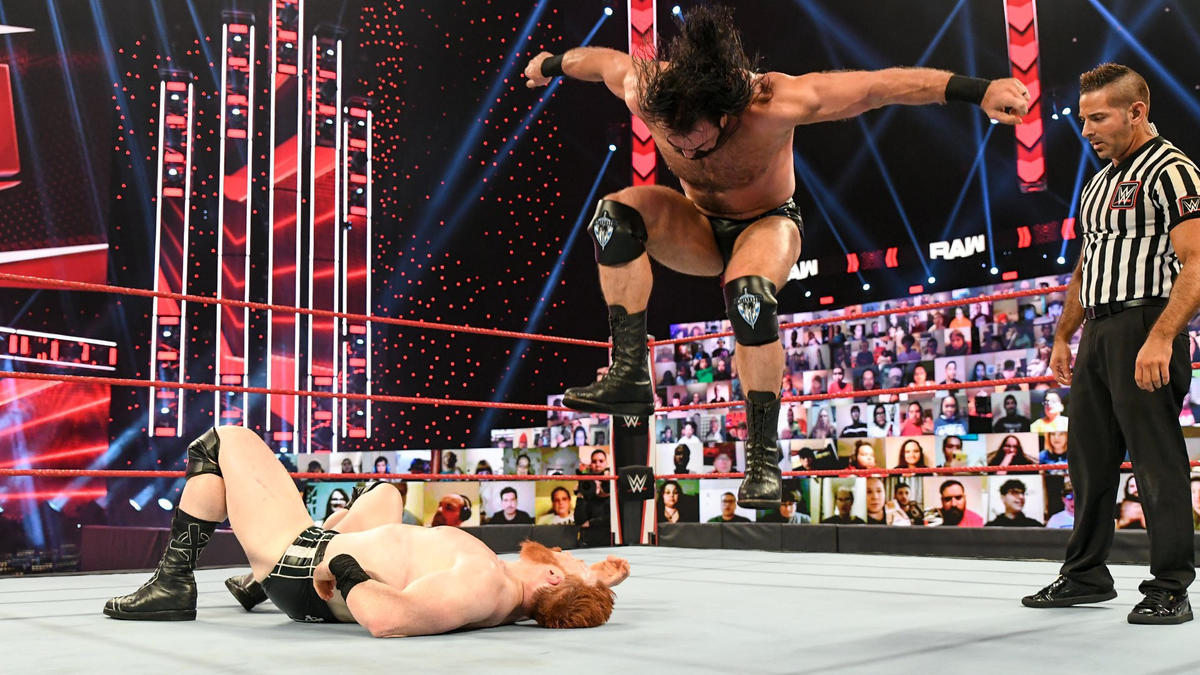 Drew McIntyre opened Raw by admitting he’d had a bit of a difficult February, which, come on, who hasn’t. It’s a difficult pandemic anniversary for all of us. Miz interrupted, accompanied by Morrison and about 36 rounds of pyro, to blame Bobby Lashley for McIntyre’s loss. Drew, who possesses more brain cells than the average baby face, called Miz out for trying to wiggle out of his championship match tonight. Morrison suggested the trio band together as M3M, but Drew still wasn’t swayed. MVP came out to promise Miz a huge ass whooping at 9 PM EST, but Drew dipped to slug it out with Sheamus on the entrance ramp. He dropped Sheamus over the barricade

Things officially kicked off after another Ubereats commercial, with McIntyre controlling our favorite fella early on. He stomped on the mohawk with all that Scottish fury, but Sheamus went for the leg to drop the former champ. Drew caught him up in the ropes to deliver his own 10 Beats of the Bodhran, but Sheamus came back with a Brogue Kick. He laid into Drew with some kicks to jaw, but McIntyre fired back with a slap. Still, Drew landed a huge clothesline and sent Sheamus fleeing to the outside. McIntyre ran him into the ring post and dropped him onto commentary for good measure, but only got a two count. A headbutt and a superplex led to another near fall, leading the two big lads to simply slug it out in the middle of the ring. Sheamus got White Noise, but McIntyre got up at the last second. The Future Shock DDT scored the same result; this match had more false finishes than Ciampa/Gargano Part 6. Sheamus wanted the Brogue Kick, but McIntyre intercepted with a Claymore, which led to a move that looked a little like both dude bumped knees and fell over. This was a very fun time; McIntyre and Sheamus are great together, and I’m sure this isn’t the last we’ve seen of them. 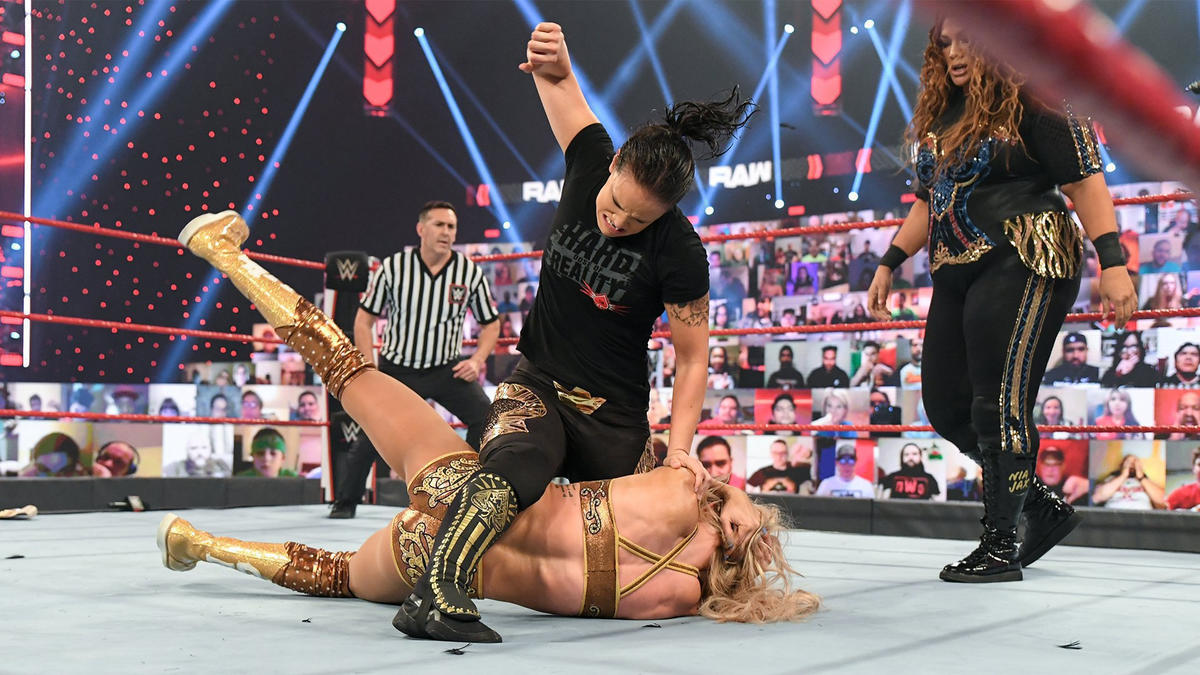 Last week, things seemed a little rocky for Charlotte and Asuka. This week, Flair drove the ship straight into the iceberg when she announced she wanted to face Asuka at Mania. With Bianca Belair facing SmackDown’s Sasha Banks, and Raw writers only knowing the names of a handful of women on their roster, this isn’t too surprising. Shayna Baszler and Nia Jax interrupted to brag about beating Asuka last week, which should definitely make them higher on the list for title opportunities than Flair, if anything about Raw booking followed logic. Jax and Baszler double teamed Charlotte, leading to a match between Flair and Baszler. Normally I wouldn’t complain about seeing these two go at it, but the whole thing was over quicker than Goldberg/McIntyre. Baszler escaped from the Figure Four and Jax tried to take Flair out on the outside, but ran into the steps when Charlotte moved. Shayna tried to lock in the Kirifuda Clutch, but Charlotte slipped it to land Natural Selection and win. Think of what these women could have done in literally anything that went past 5 minutes. 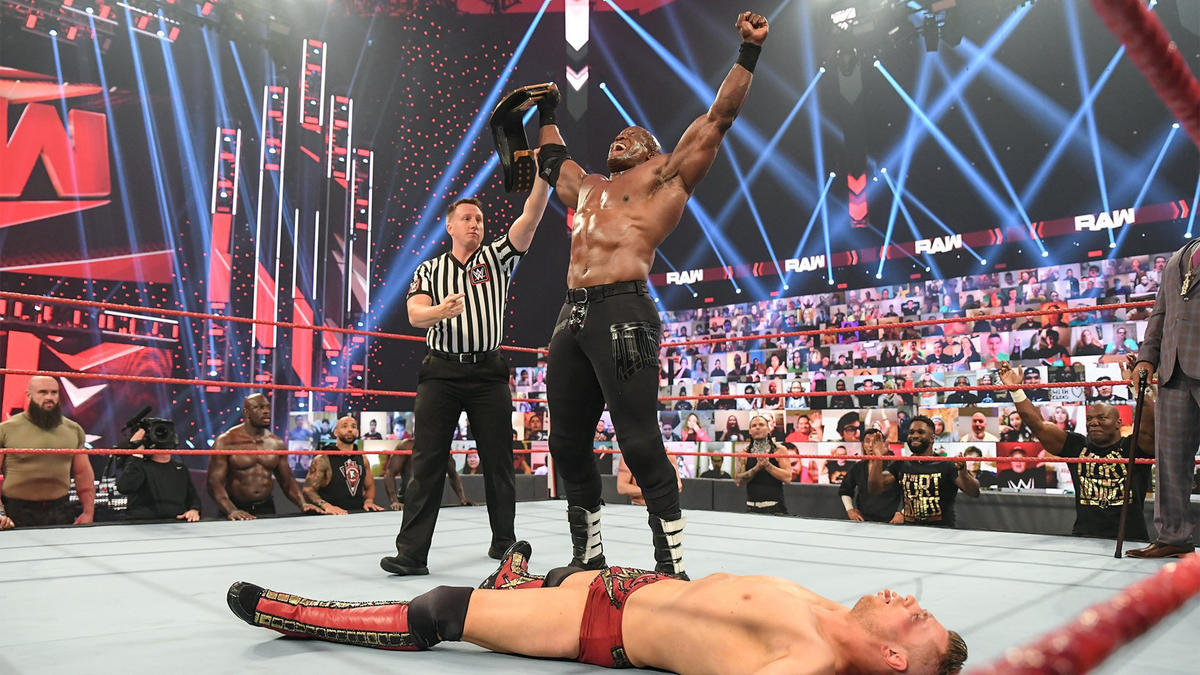 At 9:01 EST Bobby Lashley made his appearance, but Miz was nowhere to be found. Backstage, Adam Pearce met Miz faking cramps even more effectively than I did in 10th grade to get out of gym. Lashley stormed backstage to threaten Miz again, prompting Pearce to push the match til 10. They simply can’t get enough of the Lashley countdown clock on USA.

The second attempt came promptly at 10 PM, with Lashley and MVP again trying to meet Miz in the ring. This time, Miz made it to the bell before he grabbed the title and booked it out of there. It then became the main event, with Adam Pearce deciding on a lumberjack match to prevent future Miz mixups. The A Lister tried to use the belt to get a DQ, but Lashley blocked the shot. The lumberjacks forced him back into the ring and Lashley got him in The Hurt Lock almost immediately to win. Lashley and The Hurt Business celebrated, while Miz left to plan a career renaissance with Marine 9.

This rocks, honestly. Lashley has been on fire since joining The Hurt Business, and seeing him capture the WWE Title feels very right. Much of his rise over the past year is due to MVP’s presence and effort; credit where credit is due, the man took three very talented wrestlers who weren’t getting opportunities and made them all champions. It’s a bit of a shame that Miz was a week long champ, but he’ll probably still get to fight Bad Bunny and Damien Priest at Mania, so all is not lost. 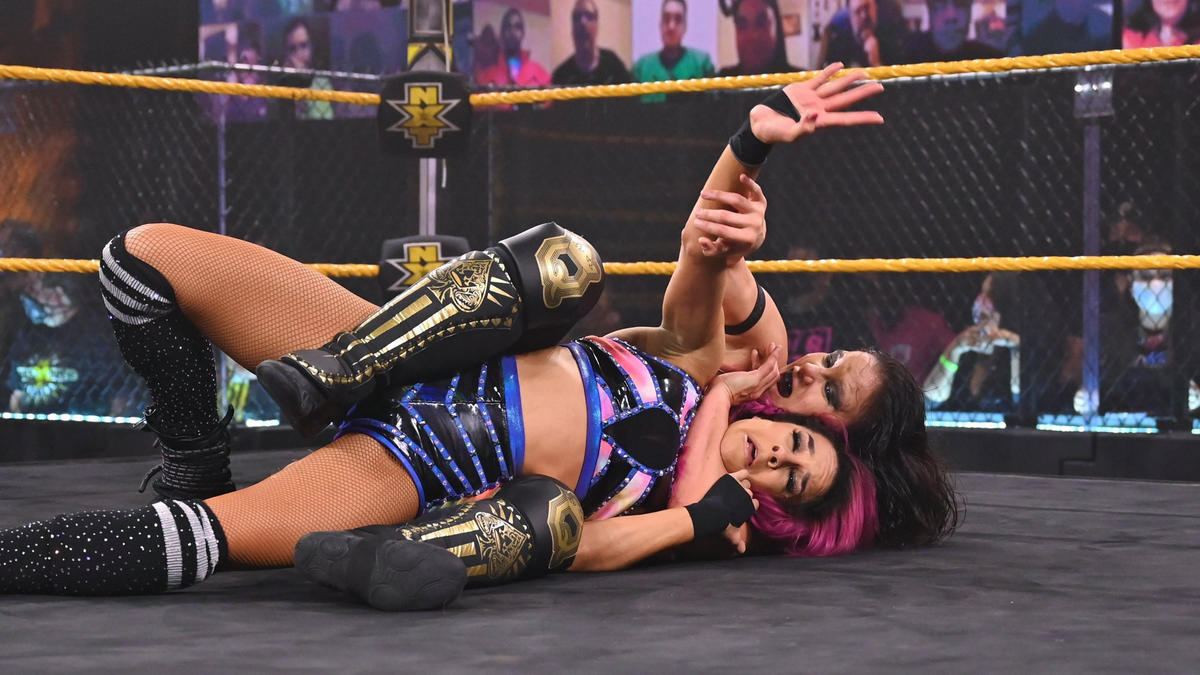 Dakota Kai and Raquel Gonzalez finally got their Dusty Cup prize this week, and it was a fitting tribute to the man himself; a messy ending to an otherwise very good match. Kai and Baszler of course have history from Shayna’s days on NXT, but Kai is a very different character today. We got some good exchanges between them, with Kai able to keep up the offense against Baszler for a few minutes. Gonzalez came in and overpowered Shayna, almost scoring the win with a huge slam. Nia and Raquel had a power showdown, but Baszler tagged back in and got Gonzalez in the Kirifuda Clutch. A big boot from Gonzalez wiped out the ref instead of Jax, and she and Nia fought on the outside. In the ring, Jax again locked in the Kirifuda Clutch on Kai, who wasn’t legal. Adam Pearce, tired from working at least 5 different jobs, sent a new ref down to declare it a submission victory for Baszler and Jax. Later in the night, he promised Kai and Gonzalez another go at the titles next week—typical WWE mess, but this was still a solid match. Gonzalez and Jax managed to roll over commentary without the table breaking was an impressive ad for Ikea furniture. 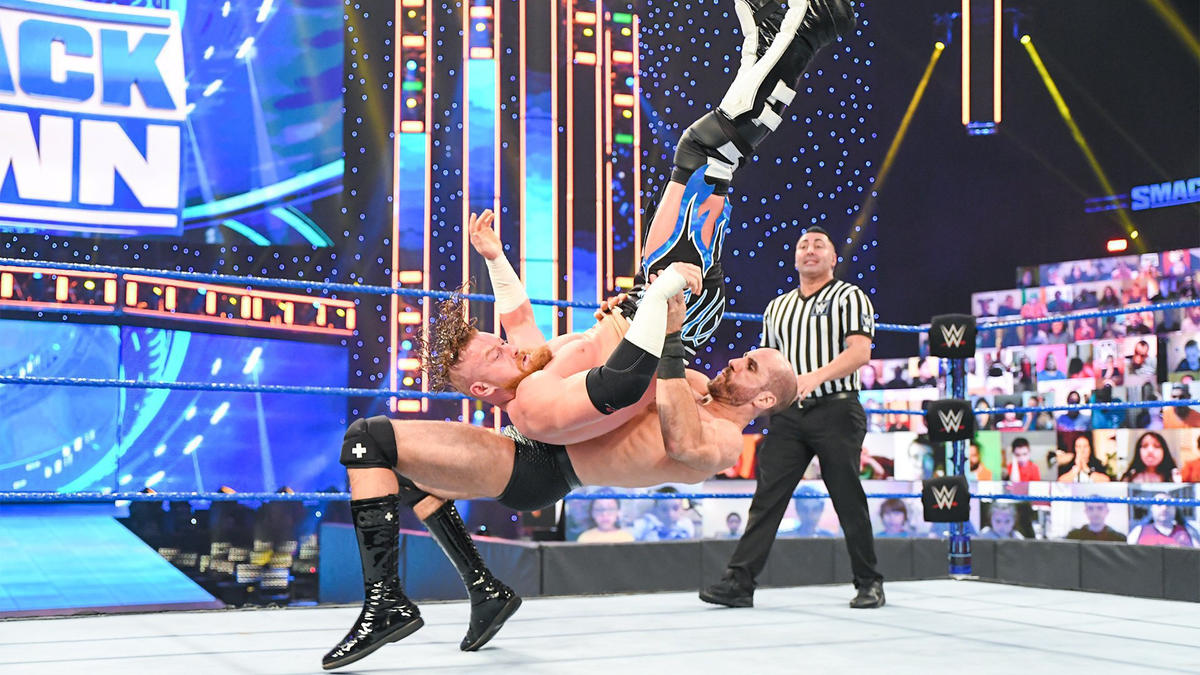 Murphy made a return to SmackDown after being largely forgotten by everyone including his adopted family, the Mysterios, and Seth Rollins, who joined on commentary. For those keeping track at home, he was wearing his third (3rd) elaborate suit with no shirt. He faced a rejuvenated Cesaro, who’s on the kind of roll WWE only gifts him once every 17 months. Cesaro tried for an early pin off a backbreaker, but the Aussie kicked out. Murphy started to briefly take control with a huge dive over the ropes onto the outside, followed by a tribute to his favorite wrestler Sasha Banks with a meteora from the top turnbuckle. Cesaro landed a series of uppercuts and got Murphy in the swing before locking in the Sharpshooter and scoring another win. Cesaro’s looked fantastic in recent weeks, and his Mania future continues to get brighter. No clue what they’re gonna do with Murphy, but it’s fun to see him too. 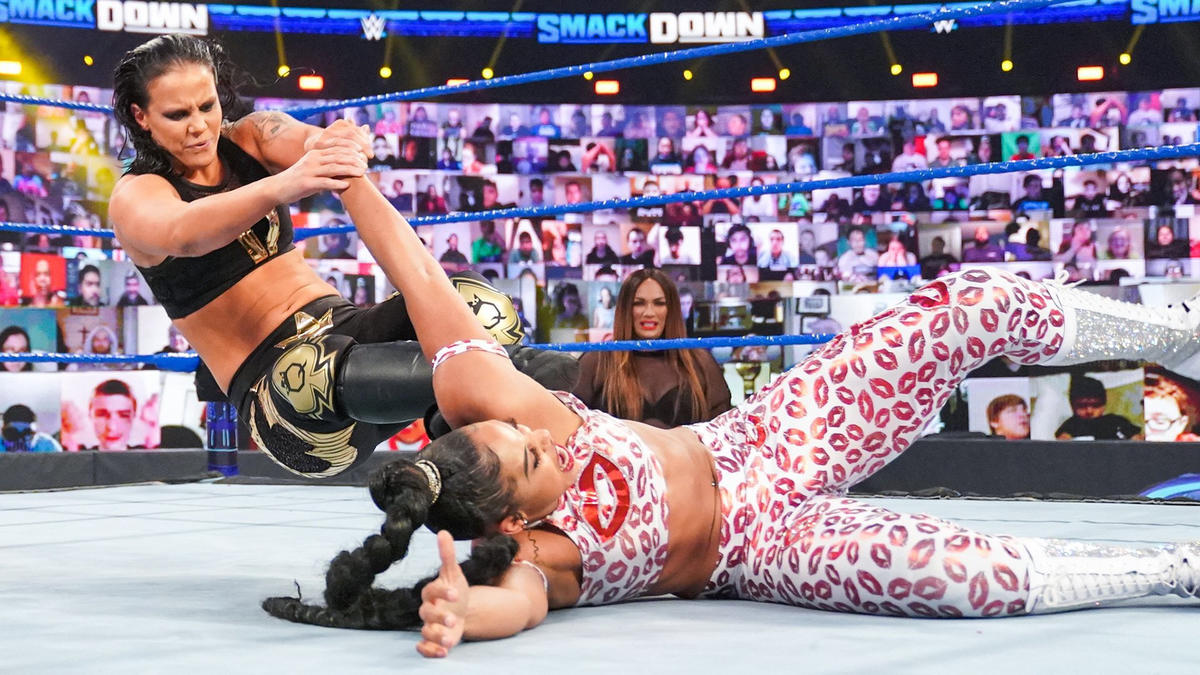 Shayna Baszler continued to carry the company on her back as she made her third appearance on WWE TV this week. Sasha and Reginald sat ringside for Baszler vs Bianca Belair. While this feels like a sure fire hit, it is WWE, so I won’t count my chickens. Both women were very evenly matched to start, managing to counter each other at every turn. Shayna connected with a big knee, but Bianca caught her and landed a slam. She hit a suplex and a back body drop, but Baszler was still able to send her to the outside. Reginald tried to help Bianca up but his chivalry went unrewarded. Shayna got another knee in the ring as Nia took out Sasha on the outside—falthough, to be fair, she was aiming for Reginald. Belair avoided the Kirifuda Clutch to hit the KOD and win. This was solid enough, and I’d love to see more from these two, but I’m really not sure why Reginald is still involved with this story. Like, I get it, he’s really into Sasha. Take a number, bud. 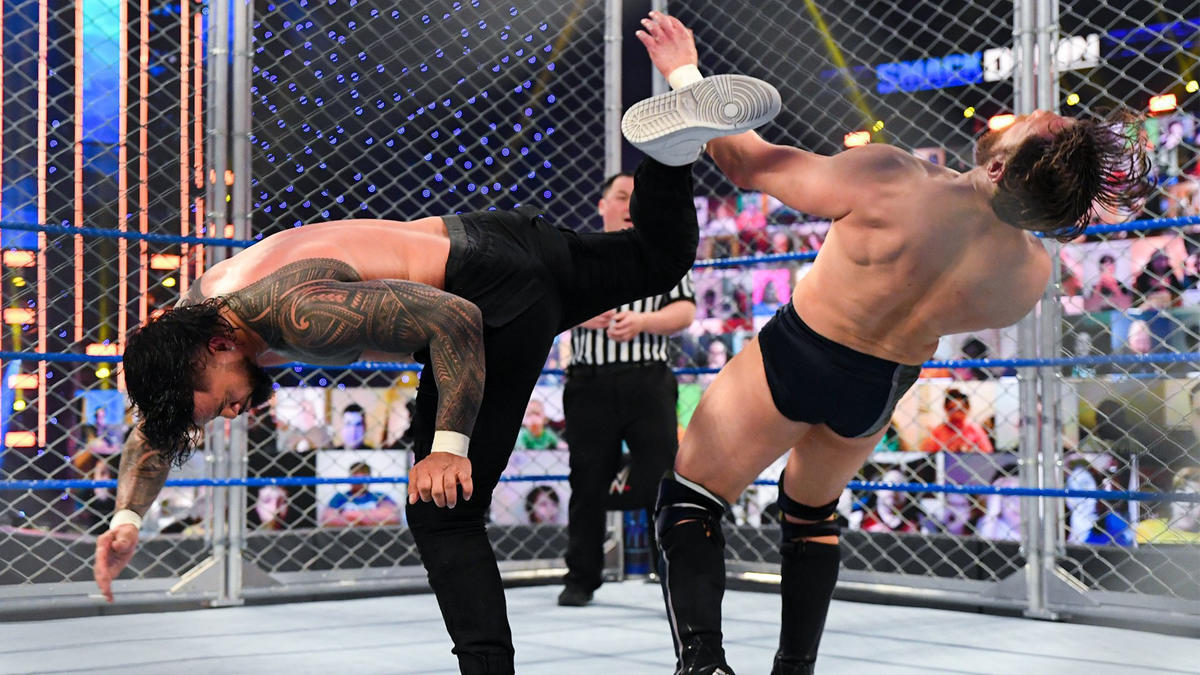 Main Event Jey Uso tried to prevent middle to penultimate match Daniel Bryan from getting another shot at Reigns’ title this week. The two faced off in a Steel Cage match, with Roman and Heyman getting a front row seat. Jey impressed his cousin with some great physicality early on, tossing Bryan into the cage walls. Uso tried to make an early escape, but Bryan was right there to grab him. He reversed things and sent Jey face first into the cage, then tried to make his ascent up the wall. Jey quickly caught up and landed a huge Samoan Drop off the top rope to crush Bryan. Bryan came back with some Yes Kicks, but Uso matched him with a super kick of his own. The feet were flying here. Again, both men tried to climb to the top, but neither could escape the other. Daniel hit a suplex from the top rope and got Uso in the Yes Lock to secure the win and send him to Fastlane against Reigns. Great stuff here, although bad news for any of Jey’s famous and successful title-holding cousins. Reigns and Bryan will obviously be fantastic, even if we know the outcome heading into Reigns vs Edge. 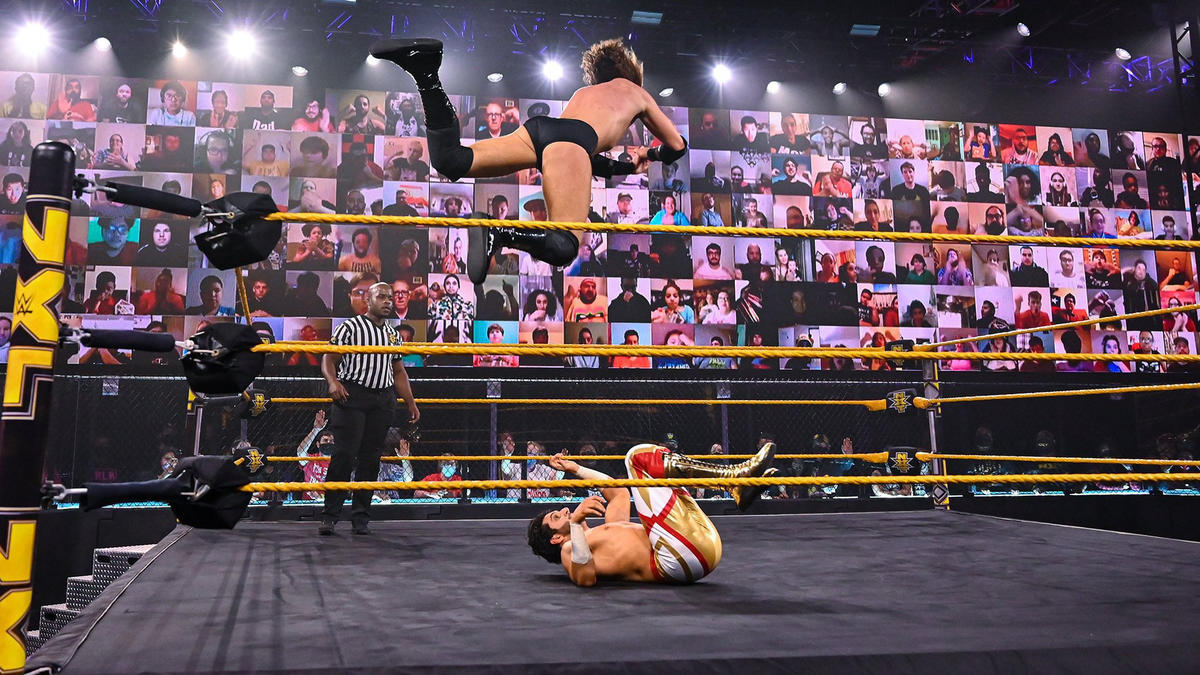 Mansoor has quietly been coming for Asuka’s undefeated streak, racking up a score of 40-0 in WWE. This week he faced former partner and model for generic male Sims Curt Stallion. Both guys were equal in early goings, until Stallion took control with a neck breaker. A DDT off the turnbuckle almost got Stallion a victory, but Mansoor kicked out. He nailed Stallion with a Michinoku Driver, then got hit with a headbutt from the Lonestar. Curt landed a lovely Spanish Fly, but Mansoor got a foot on the ropes. Stallion tried for another headbutt, until Mansoor sidestepped and sent him into the turnbuckle. A neckbreaker from Mansoor made him 41-0, which is the kind of record that should probably send him to see Santos Escobar soon.