It’s the road to WrestleMania, baby! Everybody’s dusting off their pirate suits and getting ready to do a lot of pointing, but first we’ve got a few Rumble rematches to get through. 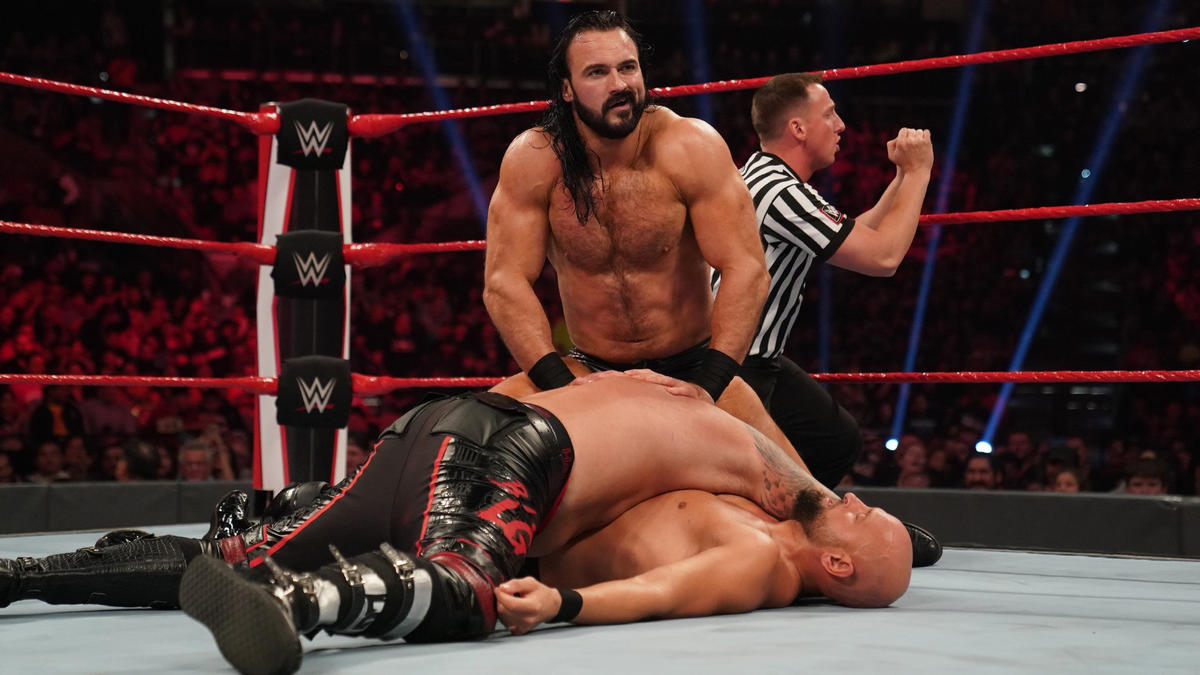 You’re Invited to a Claymore Party

A handful of weeks ago, Drew McIntyre underwent a blink and you’ll miss it transformation from annoying big dude to your cool uncle who you can talk to about anything except his receding hairline. When giving a promo about how excited he was to have won the rumble and be headed to Mania, McIntyre got “you deserve it” chants, which is a crazy audience turn around, considering six weeks ago the guy couldn’t get a reaction if he committed murder live in the ring. He’s is a great wrestler for sure, but the degree to which he’s gotten over with little character changes in the past month is awe inspiring. He’s still just a big, Scottish dude with a goofy punk jacket, but now we’re all down with it! Whatever collective mind change happened, McIntyre seemed to be feeding off of it in a way we’ve never seen before. He was good on the mic, confident and charismatic. He looked like he was genuinely having a fun time out there, for maybe the first time since his main roster debut. He challenged Brock Lesnar for the Universal title at Mania to lots of cheers, and then insisted on handing out some Scottish boots then and there. When he asked for a fight, Anderson and Gallows came out to challenge him to a handicap match. McIntyre handily beat and pinned both men, much to the delight of the crowd. Lesnar then attacked McIntyre and gave him an F-5 before running off to take another two month break. 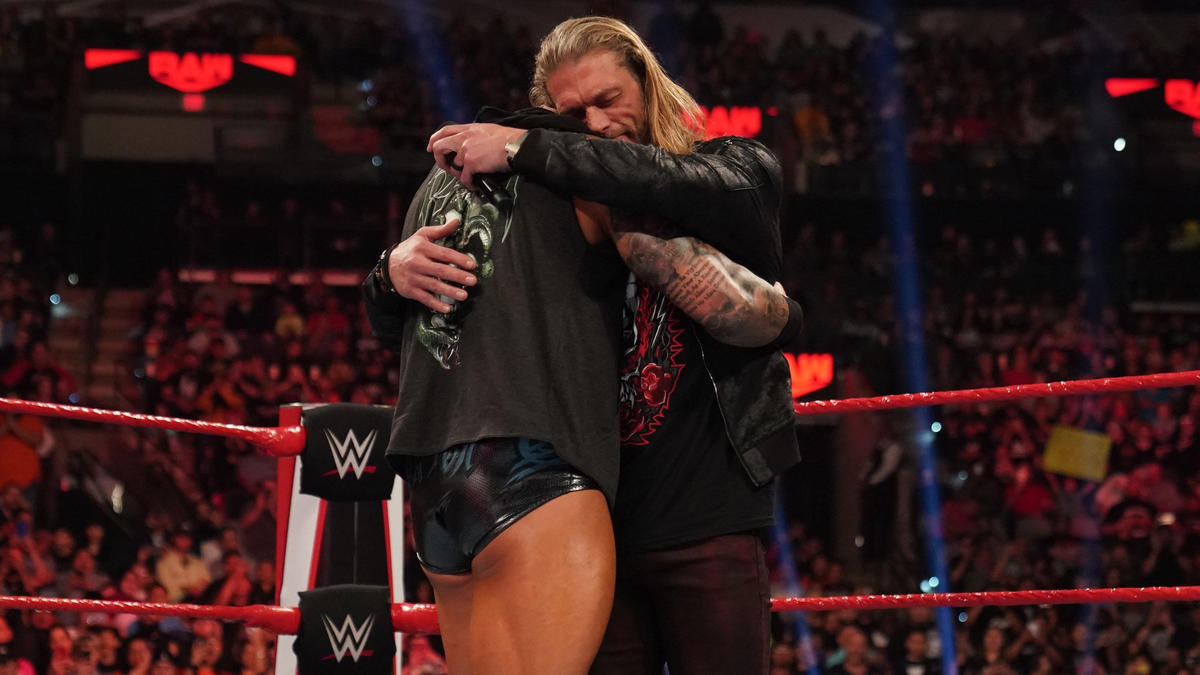 After a shocking return at the Royal Rumble, the Rated-R Superstar came to Raw to talk about how grateful he was to be back, his new opportunity to end his career on his terms, and how his hair somehow looks better than ever. He was interrupted by former tag partner and professional terrible person, Randy Orton, who first proposed a RatedRKO reunion, before living up to his moniker and turning on Edge in less then 30 seconds with an RKO. Edge grabbed at his neck and screamed, and everyone in the audience had several back-to-back mini heart attacks. Randy went for a steel chair on the outside and laid into the Canadian legend some more, ending with a final chair shot to the back of the head. Brutal looking stuff. The show closed out with Edge passed out in the middle of the ring, and everyone in the world hating Randall Keith.

Honestly, I feel like a feud between Edge and Orton should be great. After being gone for 9 years, facing someone of Orton’s notoriety and skill will help establish Edge for newer fans who might not be familiar. We’ll also get to see somebody kick Randy’s ass at mania, which is always a good thing. And if this triumphant return is his last dance with pro wrestling, he should get to feud with whoever he chooses, because he’s Edge, goddammit. Give the man everything he wants. 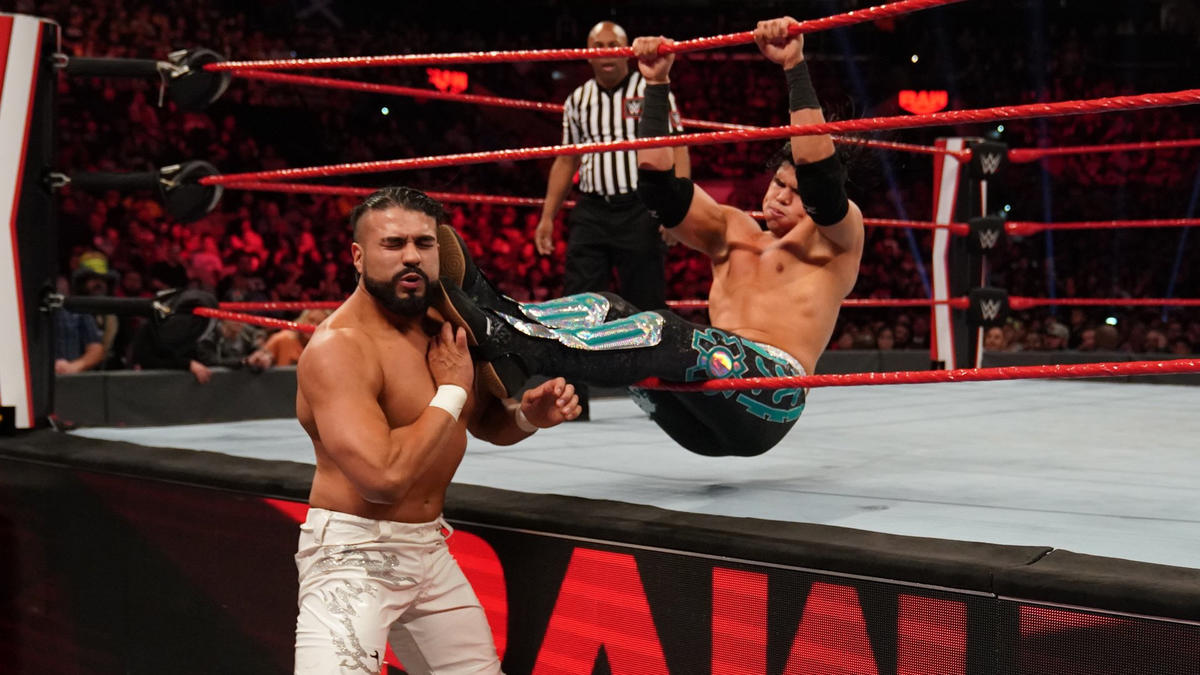 In a Rumble rematch, Andrade once again defended his US title against Humberto Carrillo. Humberto came out strong, driving Andrade to the outside and laying into him, until Andrade threw him into the ring post to turn things around. Jerry Lawler commentating a match between two dudes whose names he can barely pronounce is bad enough, But he also compared Carrillo to Justin Bieber, I guess because in his brain it’s constantly 2009. Humberto landed an angelic moonsault and looked like he was about to get the win, when Zelina dove in to break it up for the DQ. Andrade retained, because evil best friends stick together, but Carrillo didn’t care about friendship. He pulled up the padding and gave Andrade a DDT on the concrete. The crowd was super into the chance to see a grown man crack his skull open on concrete, giving Humberto maybe the biggest reaction he’s had since coming to the main roster. While handsome and extremely talented may be enough for me to stan, the WWE universe likes it more when you show a little teeth alongside those stunning dimples. 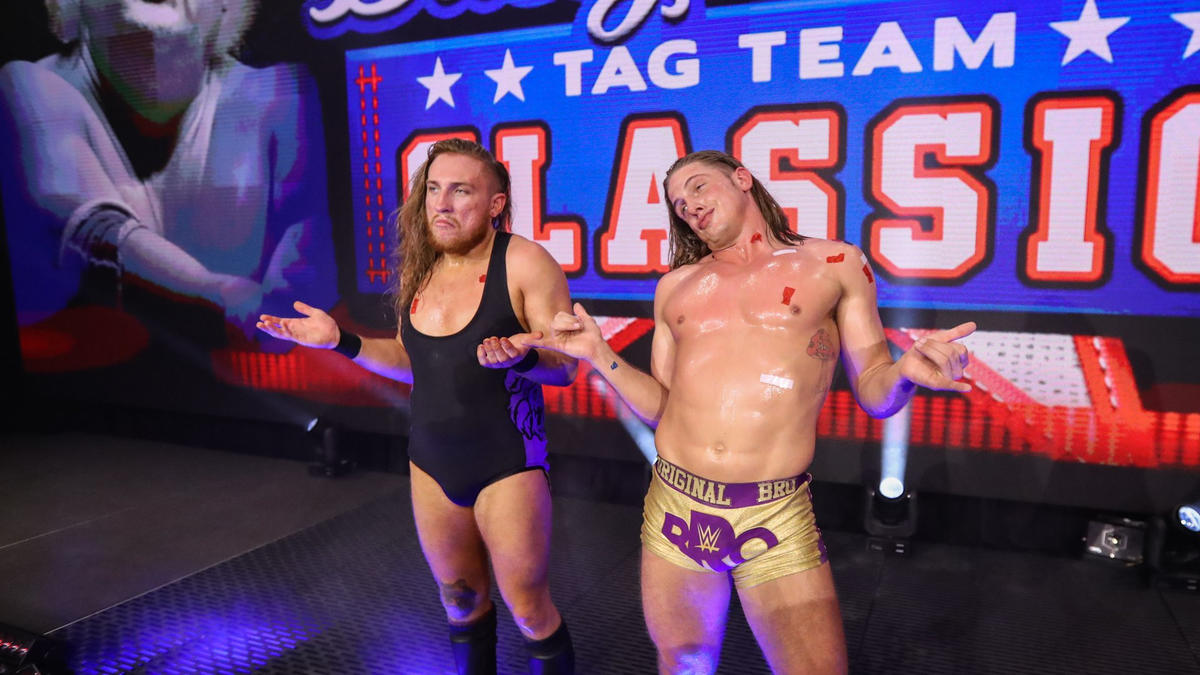 The finals of the Dusty Rhodes Tag Team Classic saw the newly formed Broserweights versus the Grizzled Young Veterans. There were a lot of chants and some shoes that came off, because that’s still a thing somehow. GYV was on a roll for the first half of the match, clearly the more established team as they isolated Dunne, but once Riddle was in the two worked together really well. Dunne was taken out on the outside for a moment, but got back in the ring and the two landed simultaneous slams. Riddle hit Drake with the floating bro, then he and Dunne did a double team kick to win the whole damn thing. In general I’m not a huge fan of ragtag teams miraculously beating duos who have been together for years, but it’s somehow a huge part of NXT’s tag division. They did it last year with Ricochet and Aleister Black, and even the year before with Dunne and Roderick Strong. Luckily, Riddle and Dunne are wildly entertaining together, enough so that I almost didn’t even mind. Their meshing personalities highlight each other; Riddle rambling to the interviewer about kicking people with his bare feet and giving very obvious euphemisms for weed, while Dunne just quietly stares into the camera with a blank look on his face. It’s great stuff. The Broserweights will now face UE for the tag titles, which should be a very fun match. 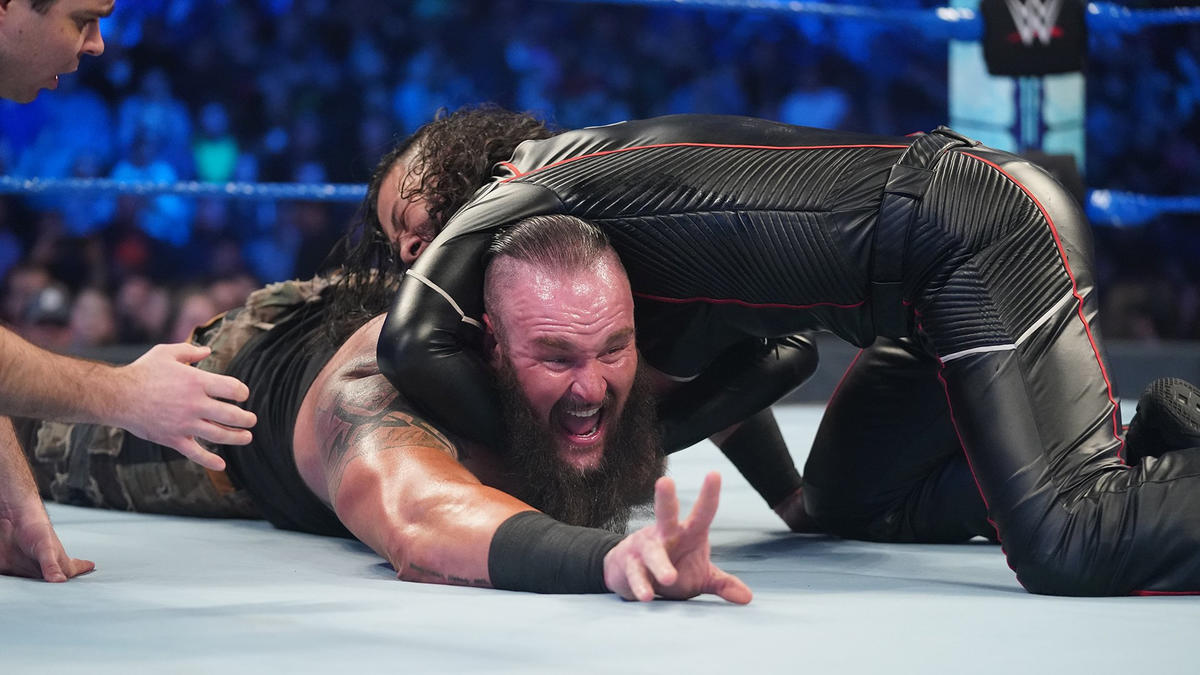 It’s 2020, and Braun Strowman finally has a singles title in WWE! After months of politely asking, Strowman finally got his IC title match with Shinsuke Nakamura. The trio of Nakamura, Zayn, and Cesaro is still so bizarre, mostly because it’s hard to imagine anything involving these 3 men being so lifeless and dull as this feud. During this match, Michael Cole reminded us that Nakamura has been champion for nearly 200 days, which seems absolutely insane, as I can’t name a single memorable feud he’s had since Extreme Rules. I’m really trying to think here, but I’m coming up as empty as the expression behind Cesaro’s sunglasses. This went about the way we expected, with Nakamura trying to get Strowman off his feet and using the numbers advantage with his pals at ringside. Sami Zayn tried to take the turnbuckle off but the ref caught him, leading to Strowman slammed Nakamura into the exposed turnbuckle and hitting him with a power slam to win the title. Braun is good at what he does, which is bulldoze over tiny men and sew patchwork pants, but it took so long for them to finally put gold on him that it doesn’t feel the way it should. It’ll be interesting to see who he faces as IC champ; he’s best when he’s in his element, knocking over ambulances and tossing men into various large objects. 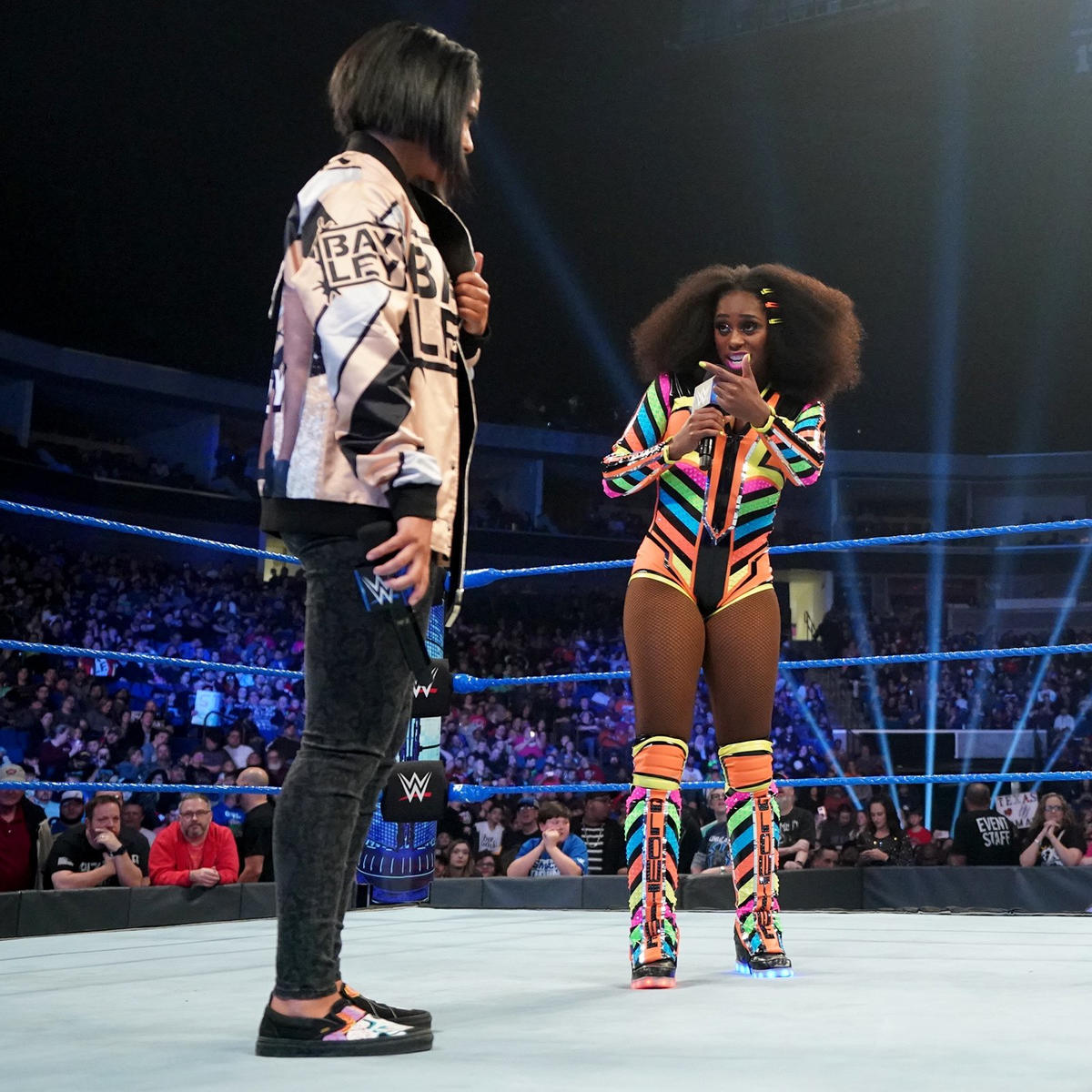 Bayley cut a promo running down Lacey for losing in front of her kid and letting down America as a country. She then invited Charlotte to come challenge her, but it was Naomi and her incredible new LED helmet, that came out instead. Just like her return at the rumble, the crowd was wildly behind Naomi as she reminded Bayley that the SmackDown Women’s champion had never beaten her, and that her light up belt when she was champ was incredibly cool, despite what the internet may have told you at the time. Bayley then went after her, trying to use the title as a weapon, but Naomi fought back with a springboard kick, and the role model retreated. It’s great to see Naomi back and in the title picture already, especially when we’ve seen so many of the same repetitive match-ups in the women’s division as of late. She’s such a joy to watch and so charismatic that it’s easy to see why non wrestling fans have been falling in love with her after her rumble appearance went viral on Twitter. 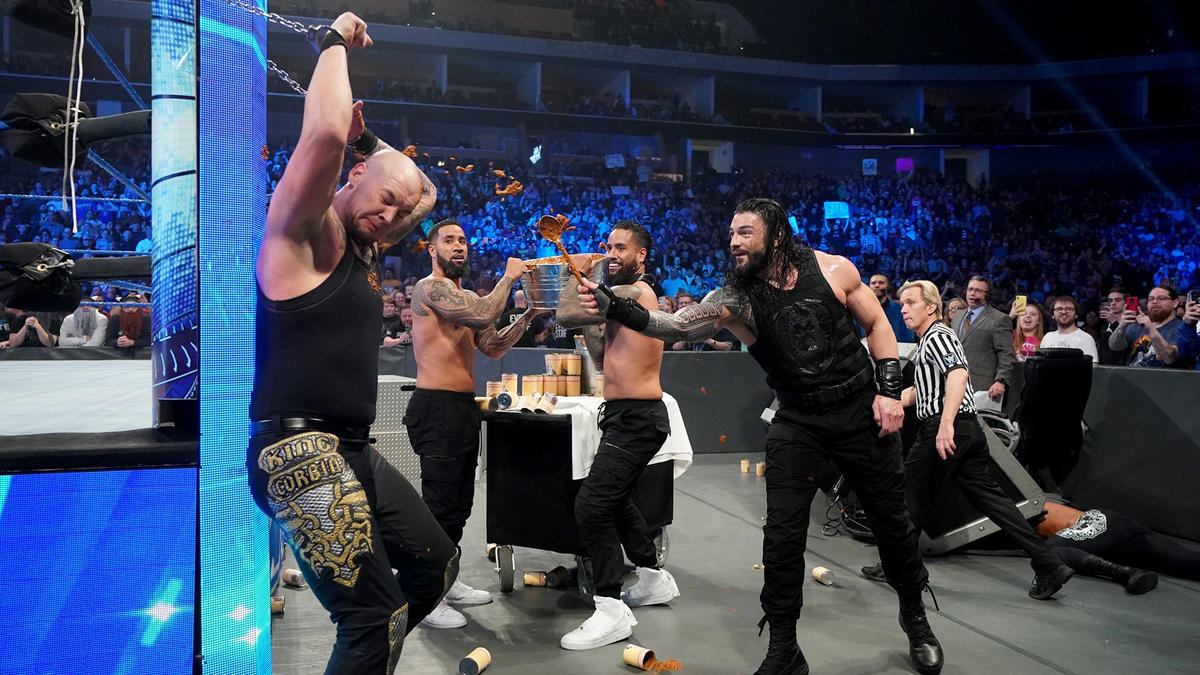 Remember when WWE was like “you know what’s funny and gross? Dumping dog food on somebody! That’ll connect with the kids.” Well, their sense of humor only got worse this week, as Roman Reigns and the Usos faced King Corbin feat ZigRoode in a ‘loser eats dog food’ match. Real stipulation on Fox television. I’m not sure why the Reigns/Corbin feud is still going on, but I guess it couldn’t truly be over until we wasted like 25 lbs of canned, generic brand dog food. Michael Cole really put over how disgusting the dog food was to be around, but I guess he’s never had a dog, because some cheap doggie chow is not the worst you can do when the theme is “things dogs eat.” We’ve seen this match in the last few weeks, but the main difference here was every few moments each man would look over at the table full of processed meat and shudder momentarily. Reigns got the win with a roll up after Jey Uso took out Ziggler and Roode on the outside. Roman and the Usos then cuffed Corbin to the post and dumped two entire buckets on him to close out the show. 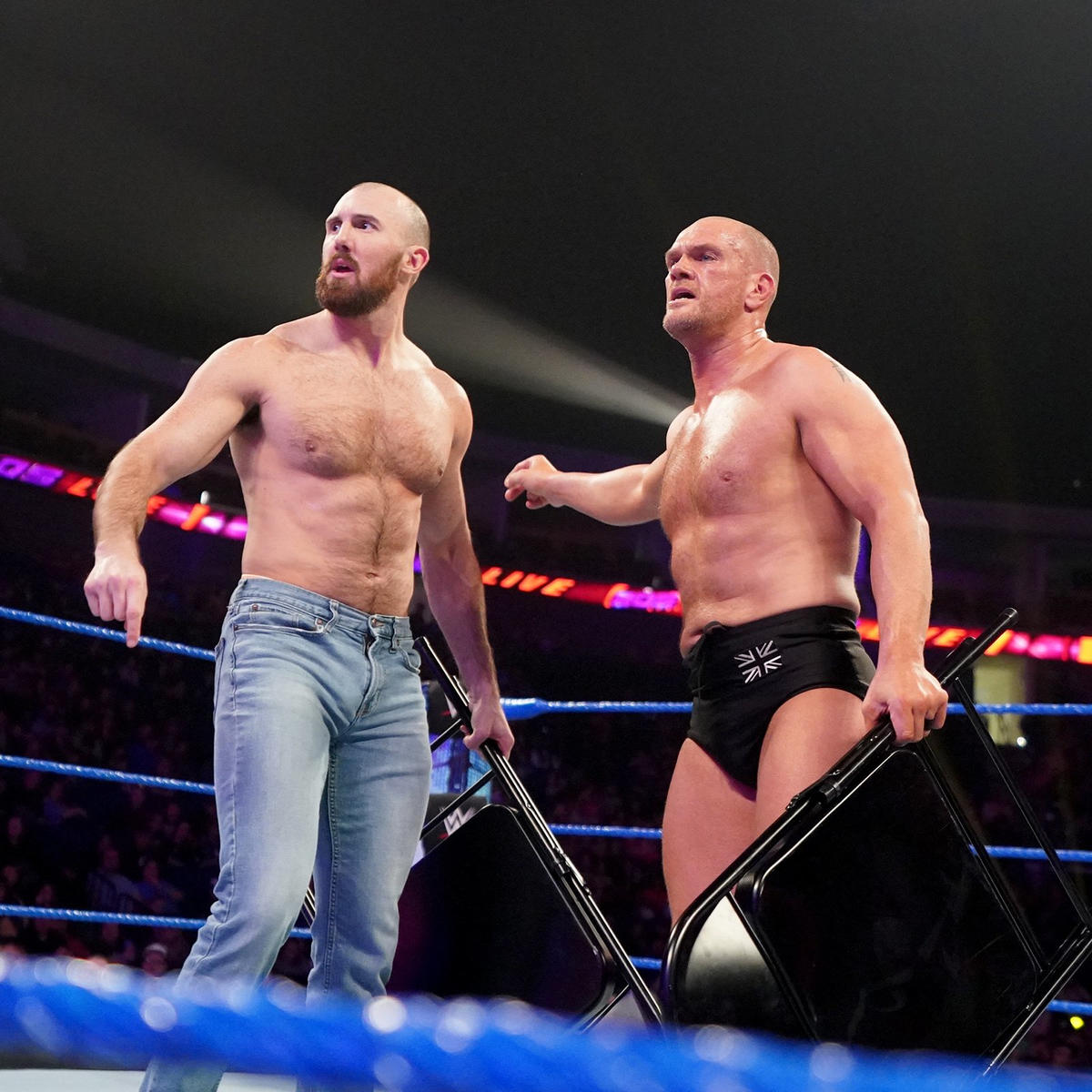 Team one two! Team one two! After months of tweeting about his pet corgis and playing the man to secure his bag, Oney Lorcan returned to WWE TV this week, saving his bff Danny Burch from a beat down by Ariya Daivari and Brian Kendrick. Kendrick and Burch’s match had been DQ’d by interference from Daivari, who saved Kendrick from tapping to Burch’s hold. Daivari and Kendrick have become partners in gatekeeping crime, but now Oney and his light wash midrise jeans are here to even the odds and prove that the purple brand is for everyone. Burch and Lorcan are a great tag team, and I was bummed to see them not included in the Dusty Classic, but at least they’re back together again and kicking ass somewhere.