Only one day left til The Greatest Wrestling Match Ever, and WWE blows their load on a Very Good Wrestling Match airing on free television. This is a little embarrassing. 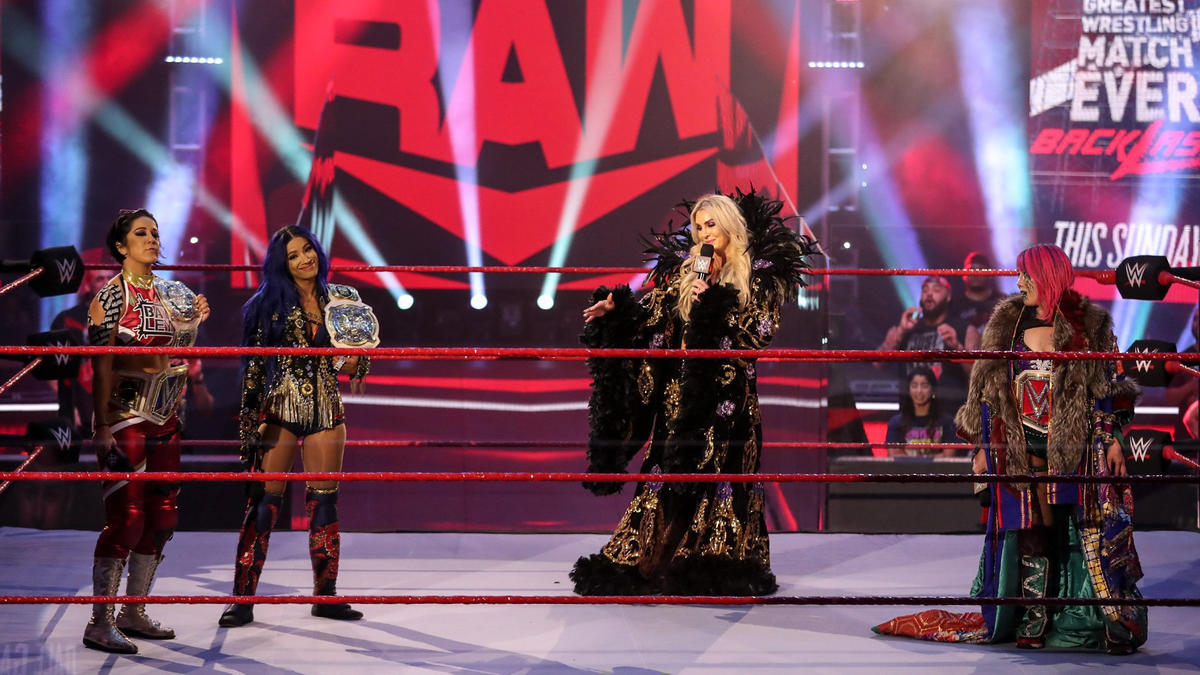 Asuka was out first on Monday night, but before we got to see any more dance skills, she was interrupted by new women’s tag champs Bayley and Sasha Banks. Charlotte then came out to join the party, as she and Asuka were supposed to face off again on Monday. After the IIconics also came out to interrupt, feeding into WWE’s favorite pastime of throwing every relevant woman into the ring at the same time, we got a triple threat match: Bayley and Sasha vs the IIconics vs Charlotte and Asuka.

The story here was between Charlotte and Asuka trying to one up each other, and it worked well. Their rivalry dates back several years, and they’ve managed to keep great chemistry as opponents. Their inability to team together makes sense, and makes their victory over longtime partners the IIconics even more surprising. Asuka tagged herself in to get the win when she made Peyton tap to the Asuka Lock, causing Charlotte to knock her down post match. I know we’ve gotten it a lot, but honestly I won’t complain about seeing Asuka vs Charlotte yet again sometime soon. 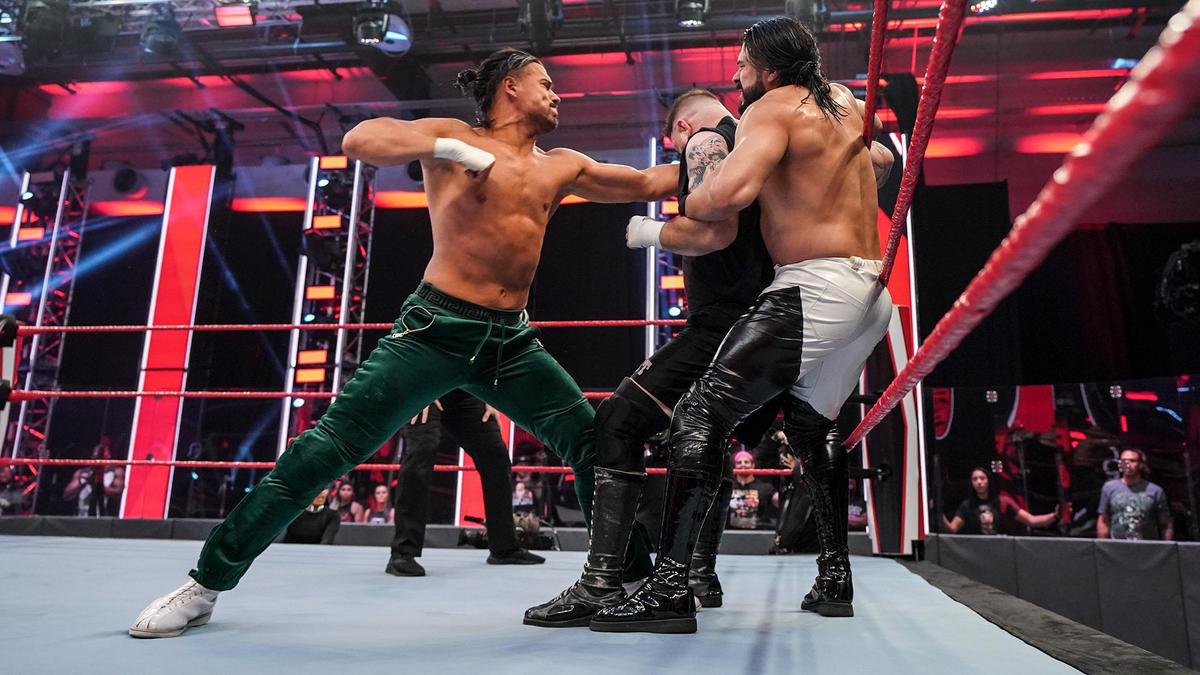 Newly crowned US champ Apollo Crews is defending his title at Backlash, and Raw hosted a triple threat to determine his challenger. Kevin Owens, Andrade, and Angel Garza faced off to potentially become the new poster boy of America. As expected, we saw Garza and Andrade team up for a bit, united by their shared interest in being the most handsome man in any given situation. Unfortunately, there can only be one, and the two got into a fight right in front of Zelina. Owens took advantage until Garza tried to hit the Wing Clipper on him, but Kevin fought out and landed a stunner. Andrade ran in to steal the moment and the pin, sending him to Backlash, and potentially breaking up the hottest boy band around. Sad. 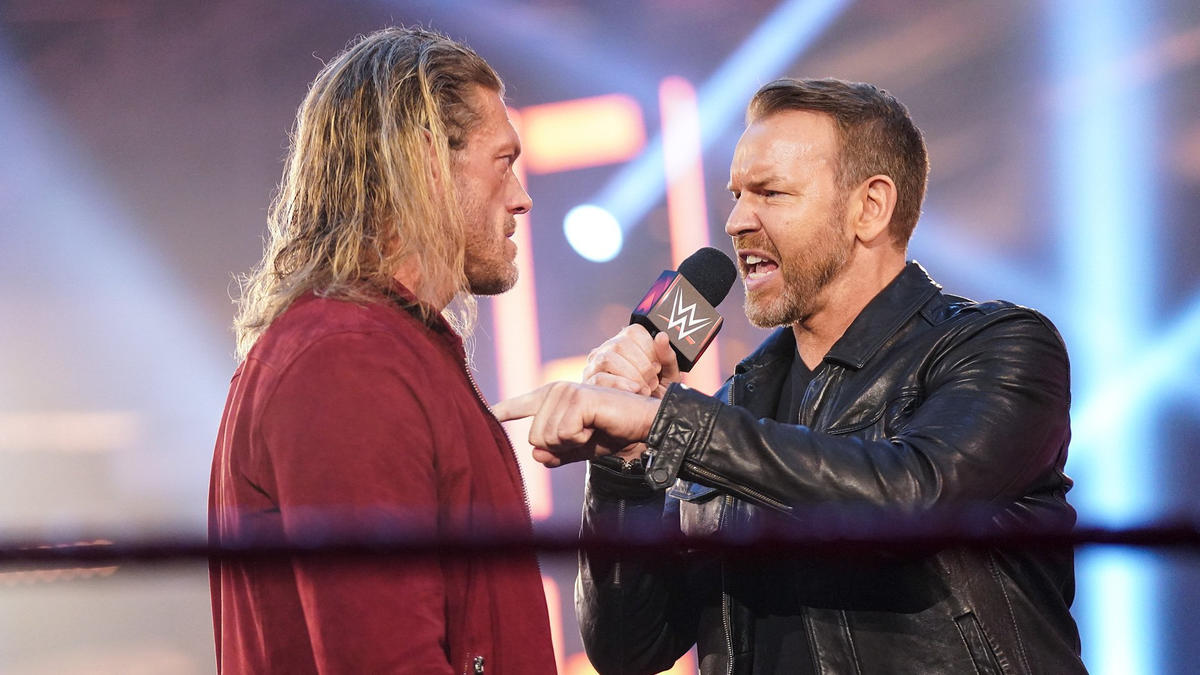 Christian returned to Raw to host The Peep Show and presumably question how he’s still not in the Hall of Fame. He invited former brother Edge to talk about his upcoming best sports entertainment match and asked him if he felt ready to take on Randy Orton again. When Edge seemed unsure, Christian reminded him of the power of believing in yourself, and the fact that his mania match looked way better once we all had to sit through Gargano and Ciampa Part 658. Orton crashed the show to tell Edge that Sunday would be his last match and he’d be reduced to making films that stay on Netflix for less than a month once more. Edge, recharged with the power of decades old friendship, didn’t back down. This was a solid segment to lead into a strong contender for WWE’s most hyped match on a C-List PPV. And we got to see Christian, that’s always a win. 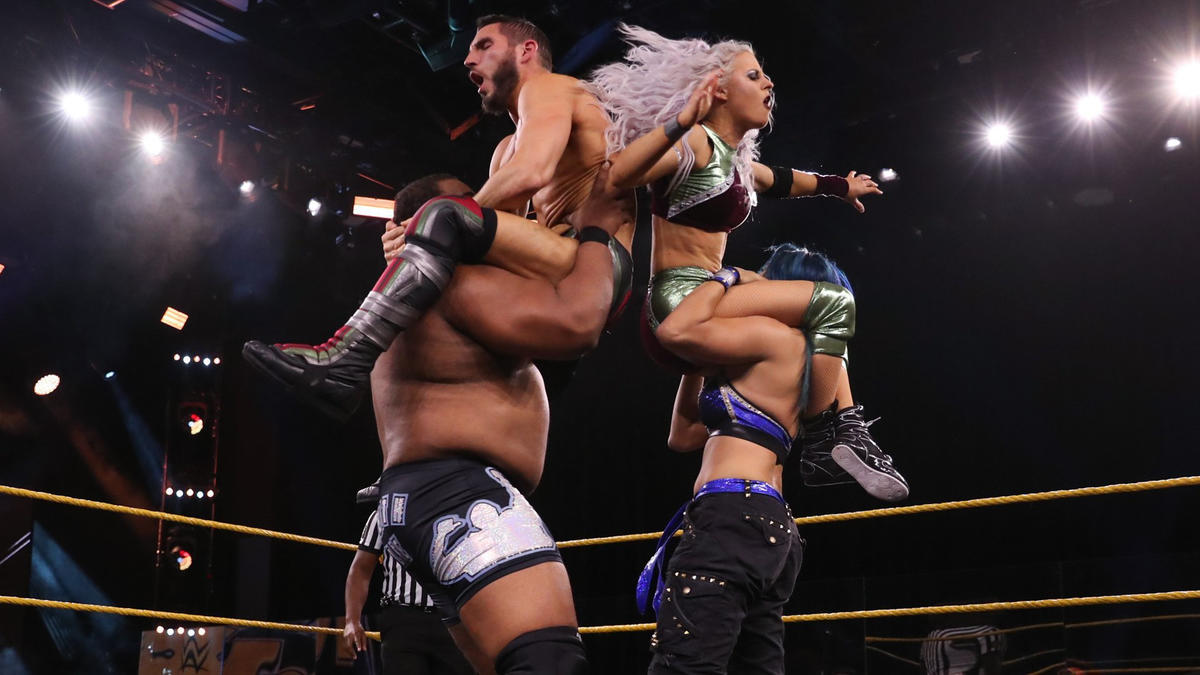 NXT delivered mixed tag team action with the did-you-know-they’re-married couple of Johnny Gargano and Candice LeRae vs the please-adopt-me pairing of Keith Lee and Mia Yim. Lee and Yim were in control early on, but LeRae got Yim from behind to take over. Johnny and Candice both went after Lee, which I guess is their way of reminding us LeRae used to be a tough as nail intergender competitor. At least it’s baby steps away from rolling her eyes at Ciampa. LeRae almost won when she hit Sole Food, Yim’s own finisher, but Mia kicked out. After a mox up, Lee accidentally knocked Yim off the apron, and Gargano gave him a DDT onto his own wife. Johnny caught Lee with a roll up to win, and we have our best couple of the week; a man who threw another 320 lb man onto his 5’ wife. That’s a fun story to tell their dog. 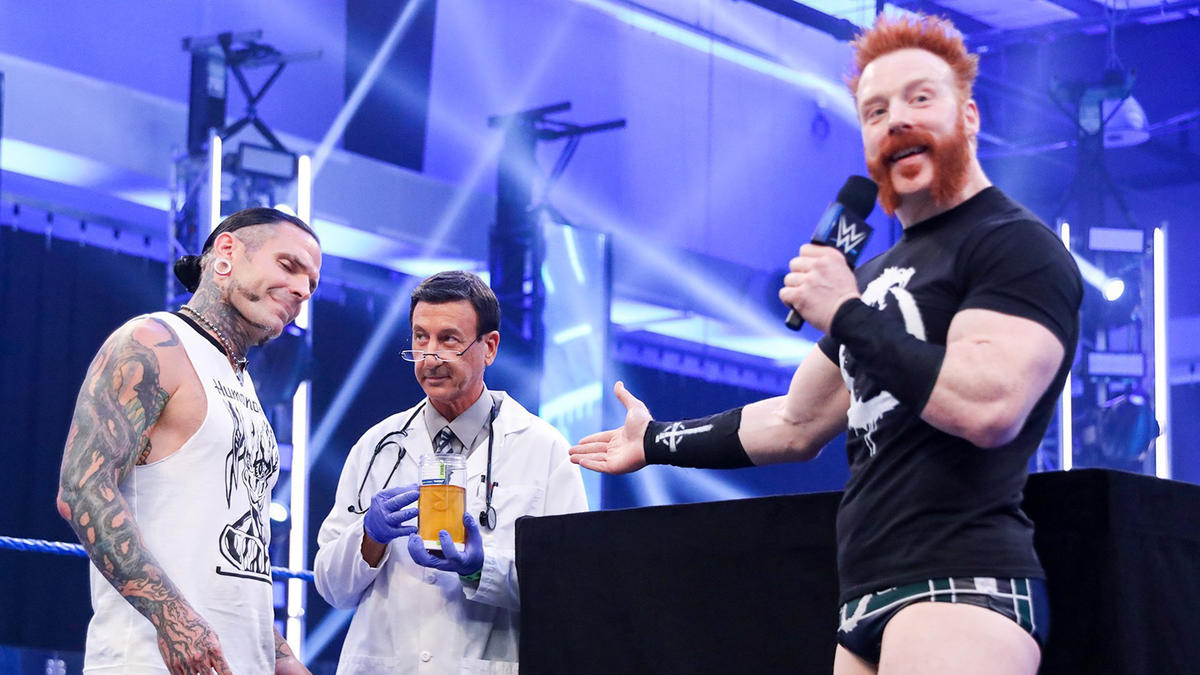 Forcing your opponent to submit to a urine test on camera? Heat as old as time. This week, Jeff Hardy and Sheamus started SmackDown with their Backlash contract signing. Sheamus once again called Hardy a junkie and refused to sign until his opponent agreed to pee into a cup right there in front of the NXT recruits. Sheamus, who naturally has access to the latest in medical technology, had brought his own doctor along to administer an immediate test for drugs or alcohol in Hardy’s system. Hardy gave in, and came back with a jar full of dehydrated looking pee, which he then threw in Sheamus’ face. I guess that’s just a workplace hazard when you’re employed by WWE. Later in the show, Sheamus found out that Jeff was as clean as he had claimed, and that piss smell is hard to wash out of smedium Under Armour tees. 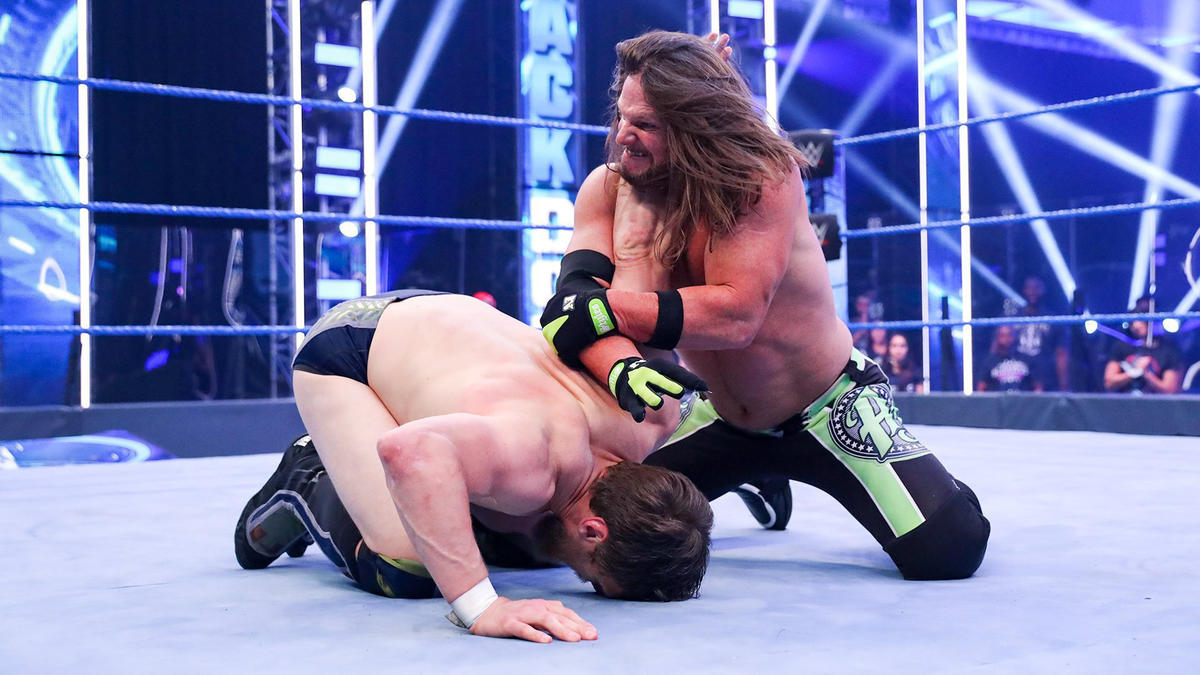 The Continent that AJ Styles Built

Styles and Daniel Bryan faced off in the finals of the Intercontinental Championship tournament this week. This is of course happening because Sami Zayn (very fairly) refused to wrestle during a pandemic, but that, like most things in Sami’s WWE career, is kind of painful to think about. This is as good a wrestling match as you can except from these two guys; Bryan spent a while trying to ground Styles to the mat, trying various submissions. Styles suffered a few Yes Kicks before managing to knock Bryan down. The two traded near falls, and the match truthfully looked like it could go either way. Ultimately it was Styles who got the win, ducking out of the way of the running knee to deliver a Styles Clash, followed by a Phenomenal Forearm. This was definitely WWE’s match of the week, and potentially the best match they’ve had in a while– it was given the time it needed to develop, and both men put on a great show. Edge and Orton are shaking. 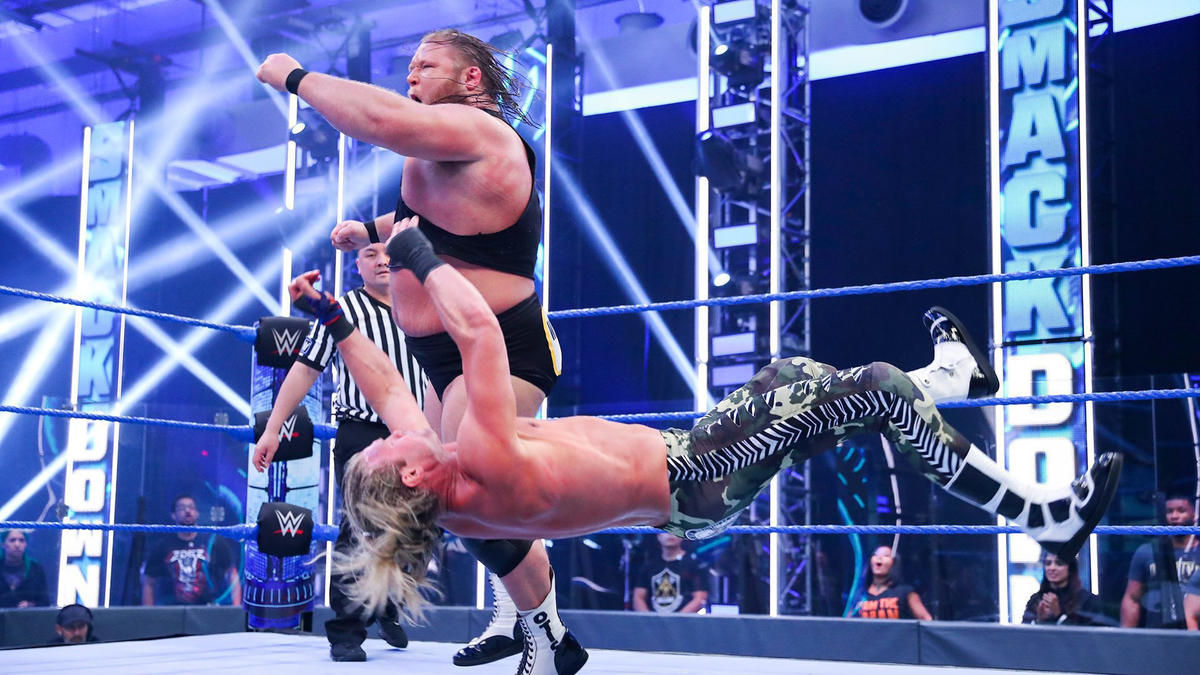 Otis has been busy the last few weeks, carrying around his Money in the Bank briefcase and teaching Mandy Rose how to wrestle in denim. This week, he and Tucker teamed with Braun Strowman to face Miz, Morrison, and Dolph Ziggler. While Dolph has absolutely found his best character work in playing the bad guy in a John Hughes movie, the story between him and Otis still dragging on feels like a bit much. The faces were in control when we cut backstage, where King Corbin was yelling at Mandy. Otis appeared to save his lady and ditch the man who’s only been his tag partner for the past several years.

Back in the ring, Miz and Morrison we’re keeping Tucker from making a tag to Strowman. Otis suddenly remembered you have to be present to win a wrestling match, and returned to save the day alongside Braun, wiping out Miz and Morrison and getting the pin over Dolph. Kind of weird that Otis is the hero going into a Universal Championship match that doesn’t feature him at all, but maybe we’ll see a surprise cash in. 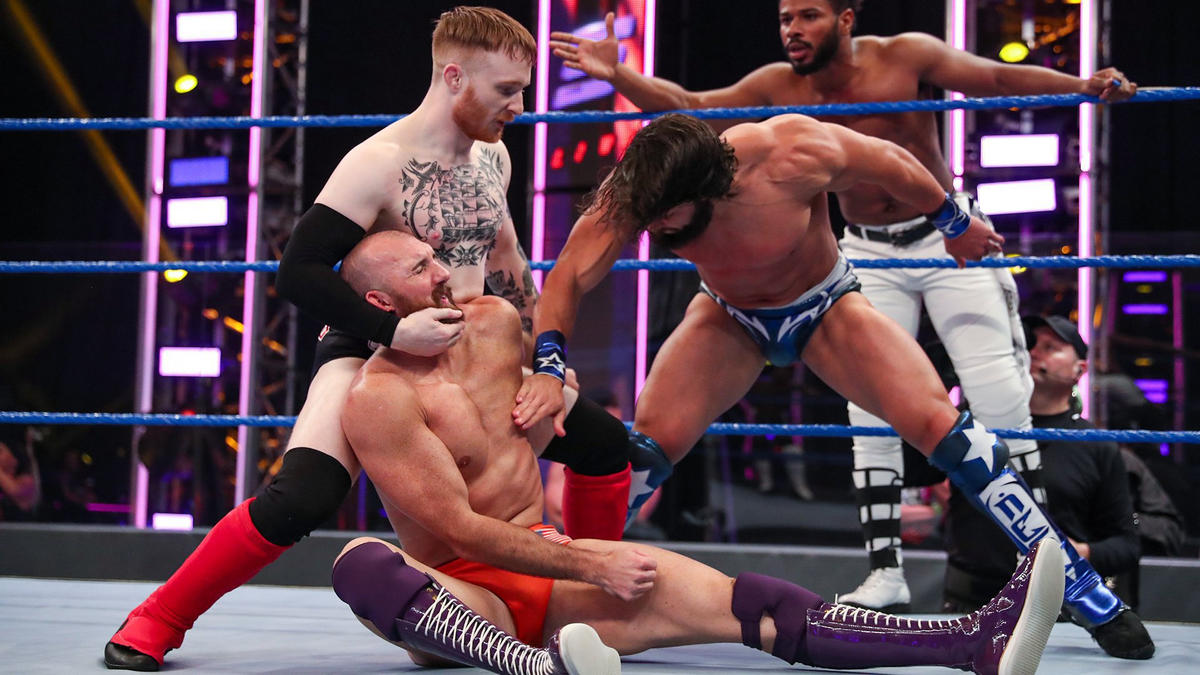 205 Live gave us a six man tag in the main event; Tony Nese, Jack Gallagher, and Tehuti Miles vs Oney Lorcan, Danny Burch, and Isaiah Swerve Scott. Longtime teammates Lorcan and Burch worked together well with Swerve, while Nese and Gallagher struggled with newcomer Miles. Constant arguing gave the faces the upperhand, until Nese caused a distraction, letting Miles get Burch from behind. Nese tried to come back in, but Miles tagged himself in once again. Gallagher and Nese both gave up on their partner and walked off, leaving Miles to eat a headbutt from Burch and Swerve’s finisher. Nese and Gallagher are an interesting team, but I’ll really be on board when they give Nese some air brush tats.

The Meme Shirt in Animal Crossing: New Horizons: A Review