This week, WWE prepped for the most dangerous stop on the road to WrestleMania; a PPV that runs more than 3 hours. They delivered surprise entrants, imploding friendships, and more pregnancy announcements than an episode of Downton Abbey. Busy week! 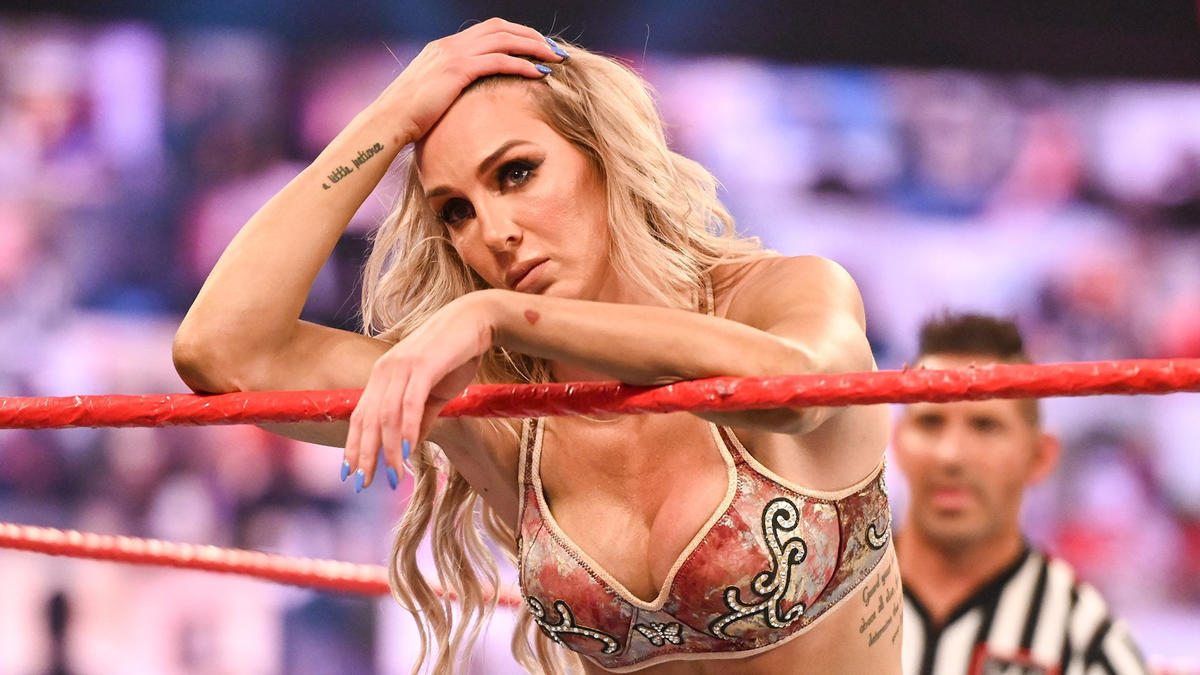 Charlotte Flair and Asuka were set to face Lacey Evans and Peyton Royce, who are still a team despite having absolutely no chemistry and nothing in common. Royce took much of the damage early on in the match, as both Asuka and Flair kept her down. Lacey didn’t want to get in with the Queen, subjecting Peyton to Ric’s pissed off daughter. Royce finally made it to her corner and tagged Evans, but Lacey stepped away and grabbed a mic instead. She told the WWE universe, Charlotte, and Ric that she couldn’t wrestle the Queen because she was pregnant. I wish this could have been done in front of a live audience, because I can only imagine the reaction it would have gotten. Charlotte’s face told the story as Ric woo-d ringside and strutted off with his new baby mama. It’s kind of insane that in 2021 there’s a story about a 71 year old man still being able to get it up, and that it’s overshadowing any kind of feud they could give to Asuka, but here we are. 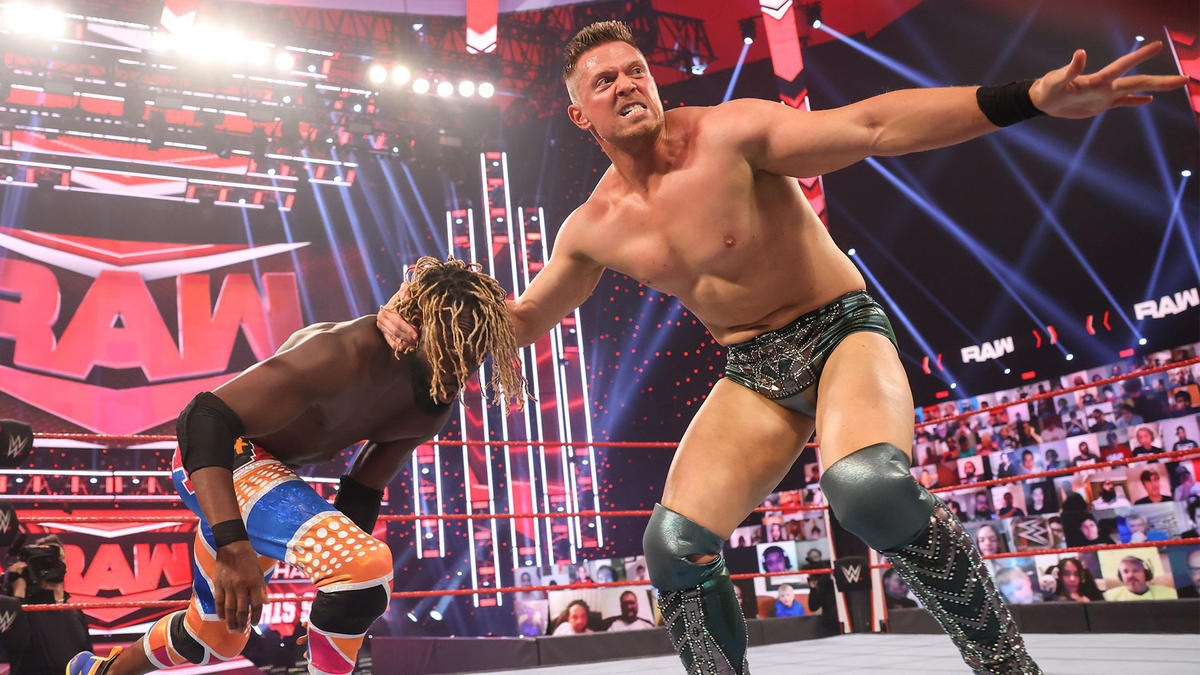 Miz TV hosted Drew McIntyre to kick off the night, which ended rather quickly with a Glasgow kiss. In retaliation, Miz revoked his spot on Elimination Chmaber, which makes a lot more sense than having Mr MitB willingly put himself through a chamber match for a title opportunity. Miz tried to convince Adam Pearce to let Morrison take his place, but Pearce instead made a match between Miz and Kofi Kingston, where if Kingston won, he’d get a spot in the chamber match. We’re all eager to experience Kofimania and relive 2019, the last time any of us were happy.

Miz narrowly avoided Trouble in Paradise early on, but Kofi fired back with a slap to the face. Kofi went up top and landed a crossbody, but Miz still kicked out. An axe handle on the outside got another 2 count, but Miz continued to stay in it. Kingston controlled Miz for a while, until USA Network’s favorite son landed a neck breaker off the apron. We came back from commercial to see Kofi making a comeback with a boom drop and followed it up with an SOS for a near fall. Miz worked Kingston’s knee on the ropes and went for the Figure Four, just like his hero, new dad to be Ric Flair. Kofi grabbed the ropes and managed to land Trouble in Paradise to send him to Elimination Chamber once again. While I don’t see Kingston winning on Sunday, he’s certainly a very welcome addition. 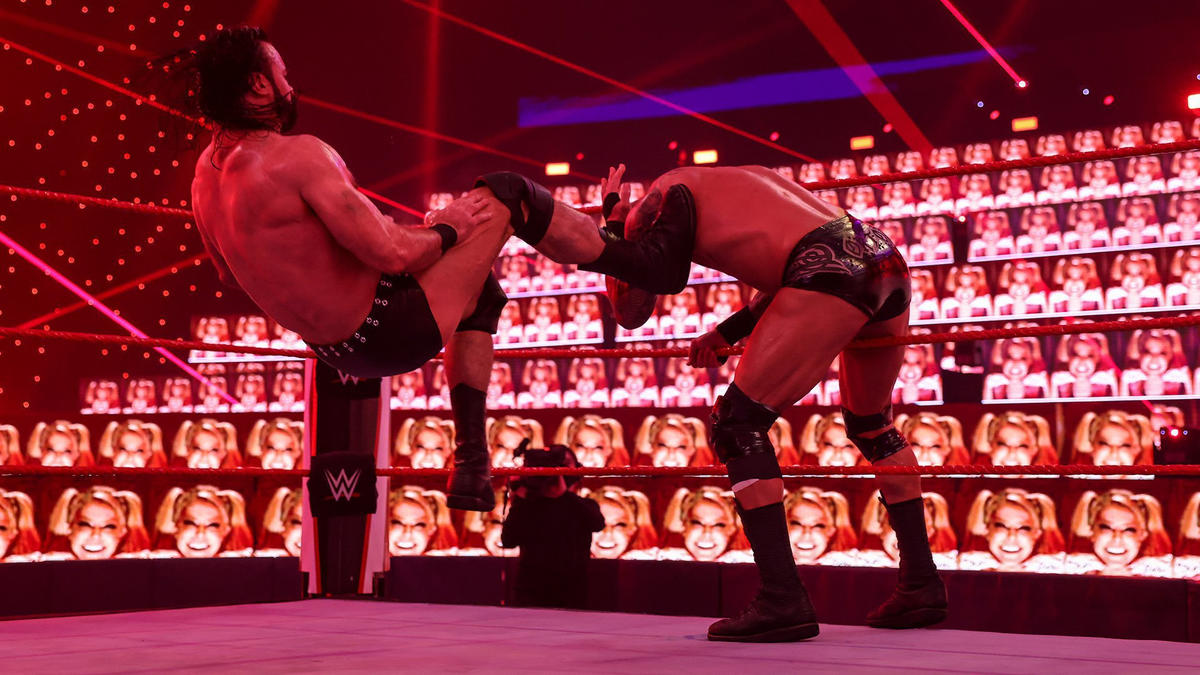 It’s been a hot minute since we’ve seen The Fiend on our small screens; longtime fans will remember that Randy Orton set the man ablaze back at TLC in December, then ate a fireball from Alexa Bliss in repercussion. Despite Orton’s completely healed face, Bliss has still been bugging him for the past few weeks. She interrupted a promo on Monday night where Orton used the word “daunting,” which was already throwing me off big time. We saw creepy eyed Bliss sitting in a pentagram in the Funhouse, trying to summon The Fiend’s spirit or at least his pinstriped jacket to borrow. Later on in the night, she hijacked the ThunderDome while Orton was in the gauntlet match, broadcasting her face in all the electronic fans seats. Creepy, creepy. McIntyre seemed super uncaring about this woman who can literally throw fireballs, but the distraction got Randy counted out. I’d bet on some more Bliss interference on Sunday, but they’ll likely save The Fiend’s return for a headliner PPV, like Fastlane. 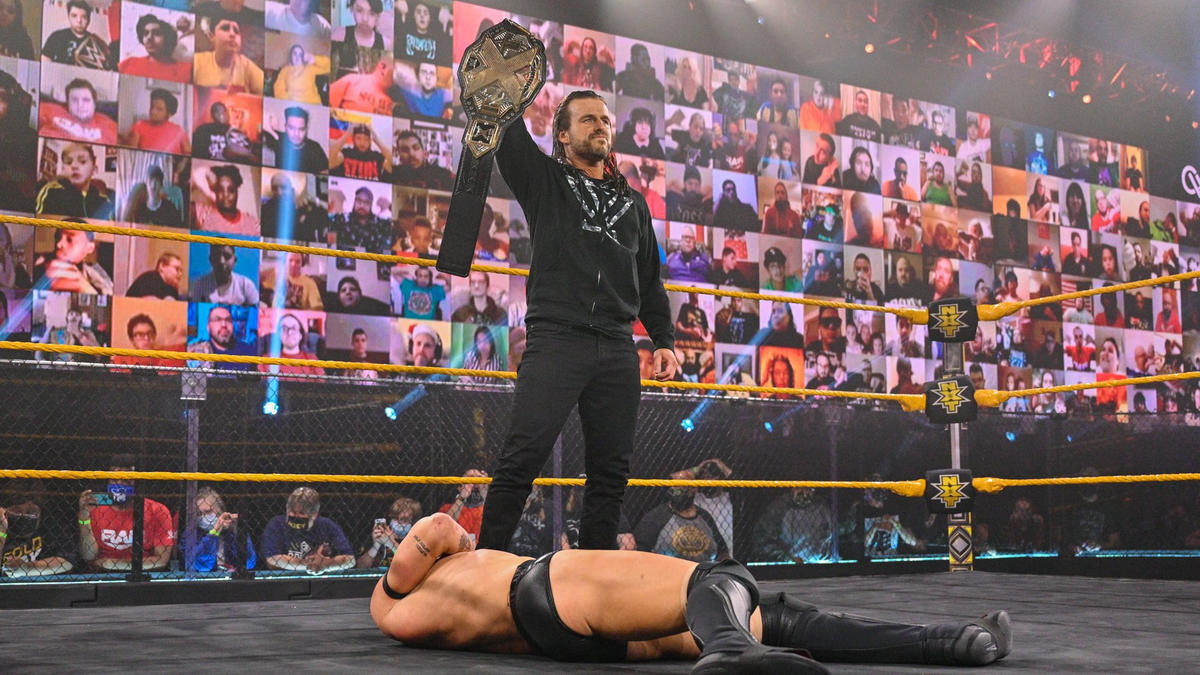 Friends to Enemies to Wrestling Opponents

Kyle O’Reilly used NXT to ask some very personal questions, like why would Adam Cole kick him in the face after all the male bonding they’ve done? Cole didn’t come out, but Roderick Strong tried to placate his buddy and say Adam didn’t really mean it. I frequently accidentally kick my friends, so I can see how that would happen. Finn Balor said this was O’Reilly’s fault and that Kyle had set him up, even thought he was the only dude to be remotely nice to Balor in weeks. The trio was attacked by Lorcan, Burch, and Dunne, which then lead to a six man tag in the main event. As one could expect, this was a very fun match with some great chemistry between Balor and Strong in particular, which was a little surprising. As Dunne and Balor were going at it on the outside, Adam Cole finally showed up to once again knock Kyle around, dropping him on the steps with a brainbuster. The Bitter End finished Balor to win the match, and Cole hit Finn with another super kick to seal the deal. Cole vs O’Reilly should be fantastic when it happens, and it’s nice to see Kyle get the spotlight some more. 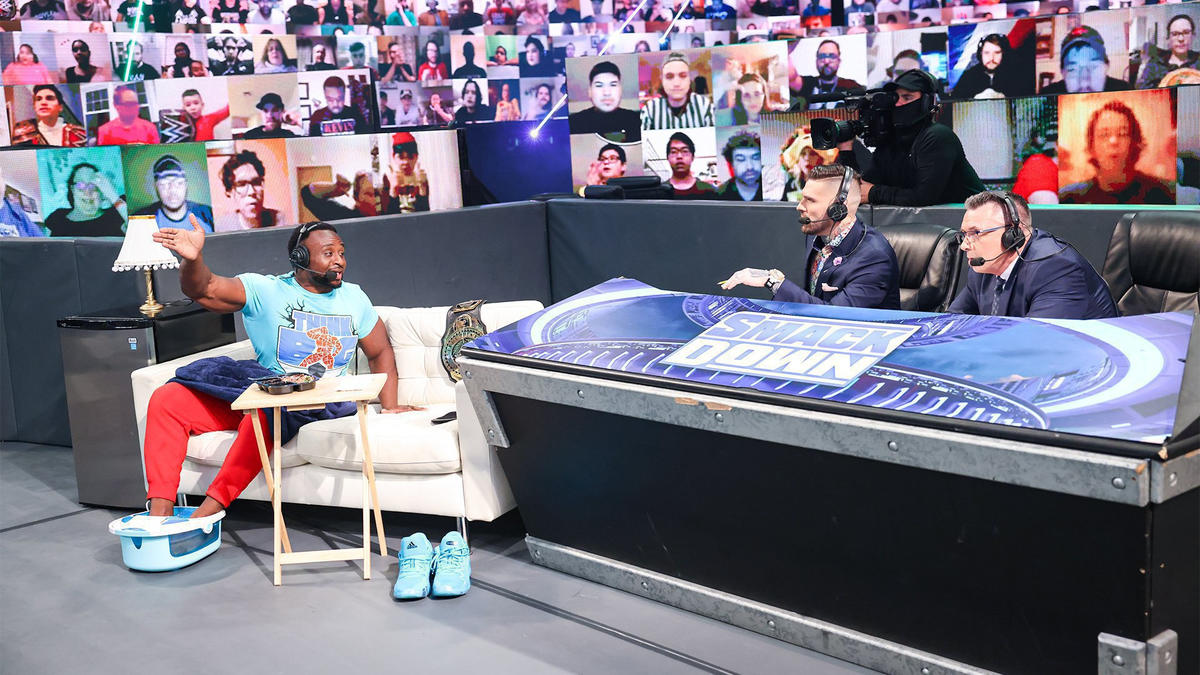 Dinner and a Beat Down

Big E took a spot on the big comfy couch to get up close and personal during Shinsuke Nakamura vs Apollo Crews. E munched down on a TV dinner until Crews threw Nakamura right into him on the outside. E was pissed- Kids Cuisine is hard to come by these days. Back in the ring, Shin got Apollo with a series of kicks, but couldn’t keep him down. Crews hit an enzoguri to get Shinsuke wobbling, but Nakamura came back with a quick roll up to win. Apollo beat down Shin for having the nerve to be good at wrestling, and tossed the King of Strong Style into the barricade. Big E tried to run him off, but Apollo ran both him and Nakamura down with the steel steps. He dragged E into the ring to land some final blows, then ended by dropping the steps straight down once again. Ouch. I’m enjoying this new side of Apollo Crews, who’s been made the “nice guy face” for much of his time in WWE. Crews is a fantastic wrestler, and this heel turn could be just what he needs to change things up. Just as a note, it’s interesting to see both Nakamura and Cesaro on separate face turns as well. 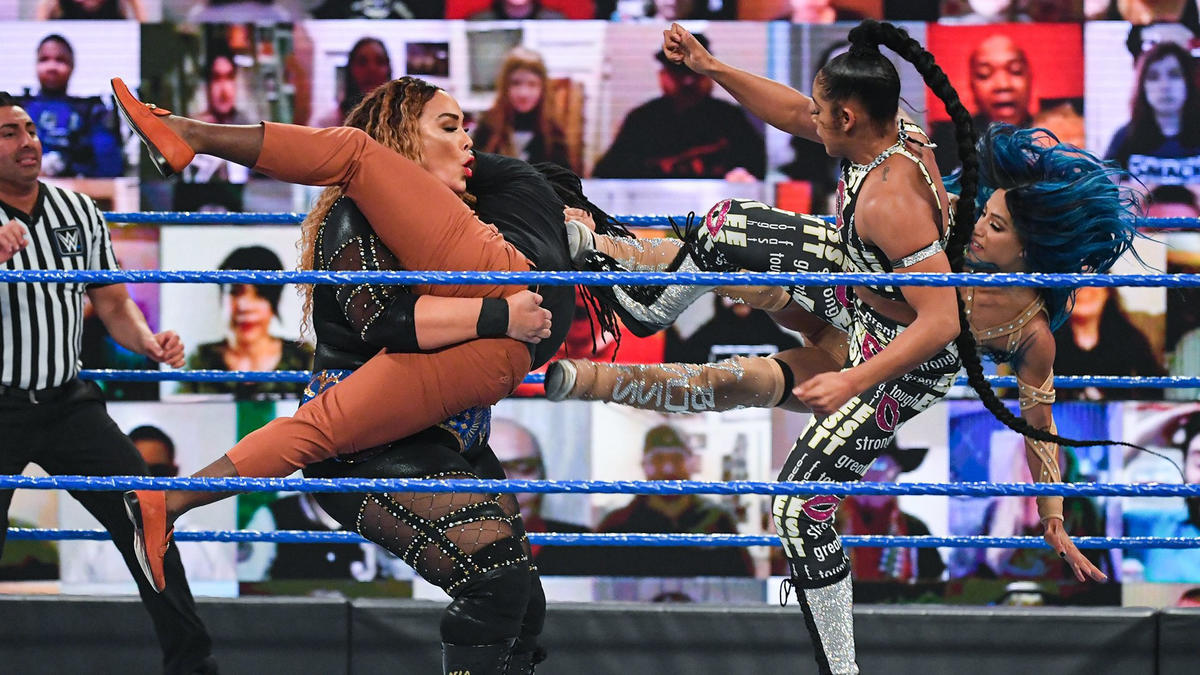 Bayley hosted another episode of next weeks WandaVision inspiration, her talk show Ding Dong Hello. She hosted Shayna and Nia, who are making their third appearance on WWE TV this week. Bayley reminisced about her tags as tag champ with a shoutout to old pal turned #1 hater Sasha Banks, which got Nia and Shayna talking about Banks and Belair. Reginald, who now apparently leads the Krew, came out to defend Banks, until The Boss herself made an appearance. Belair showed up next, and with three heels and two faces plus one sommelier, we had ourselves a six man tag. It’s fun to see WWE embrace intergender wrestling, however brief it may be. Reginald didn’t get much action here, but he did prompt Nia Jax to yell about how she’s a fine wine. Another hole spot on the apron took Nia out momentarily, which gave Banks and Belair time to go after Baszler. The ladies landed double drop kicks on Nia and let Reginald get the win. This was fun, even if it continues to be a mismosh of storylines. The obvious choice is Banks and Belair at Mania, but i see why they don’t want to announce that just yet. Having them team some more adds to the build, and let’s us see two of the best in the business right now partner with an extremely athletic sommelier. What more can you ask for? 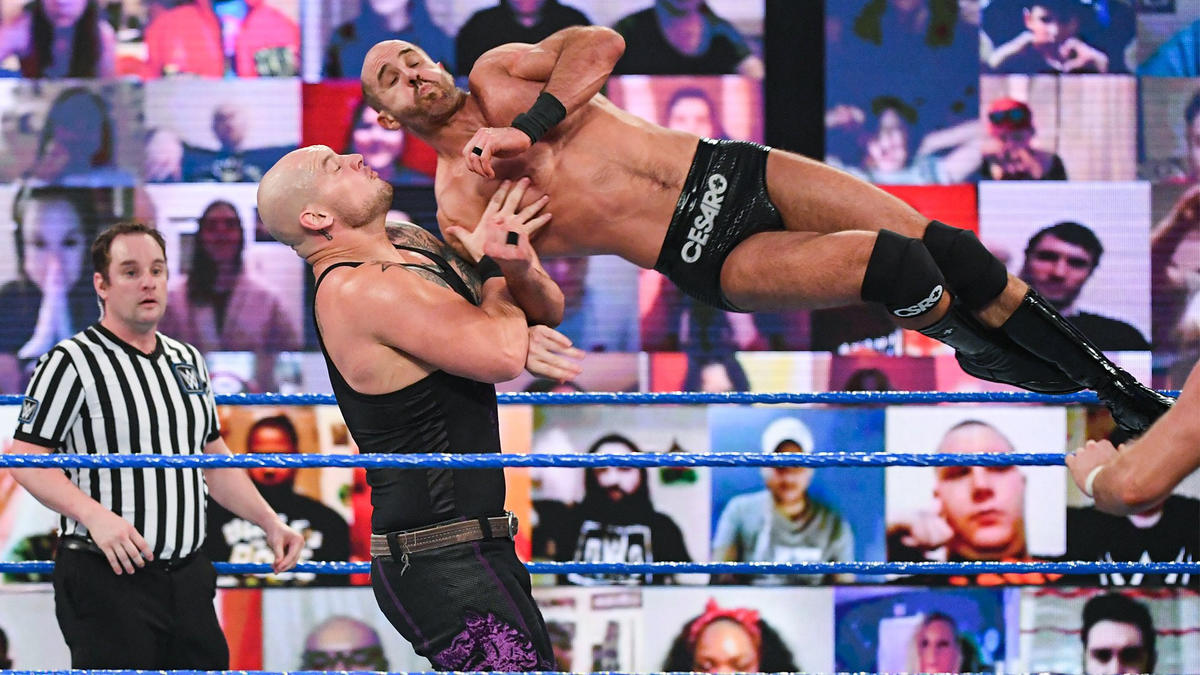 Another six man tag capped things off for the night, this time featuring participants in SD’s chamber match and my favorite TV actor Edge on commentary. Unlike Raw, there didn’t seem to be any incentive attached to this one, but these guys did their best to wear themselves down 48 hours before a huge title match anyway. Quick tags to start until Sami took down Bryan with a knee right to the gut. The bad guys argued about who gets next and gave Dan time to rally; he just made it to the corner to tag Cesaro. Zayn and Corbin both went swinging, but Jey tossed Cesaro out of the ring and into commentary. Daniel tagged in again and landed running dropkicks on Sami, but Uso broke up the pin. A Blue Thunder Bomb from Sami returned the favor, but this time it was Cesaro who got in at 2.5. A few uppercuts from Bryan let him get Sami in the Yes Lock, and Zayn tapped.

Corbin attacked Bryan, setting off a chain of finishers until Edge landed a spear on Uso. Roman Reigns appeared to spear the spearer, and stood over the bodies to close the show. Edge vs Reigns at Mania is becoming even more appealing; if two men both hit a spear in a 25% capacity stadium, does it still look like the world’s strongest hug? 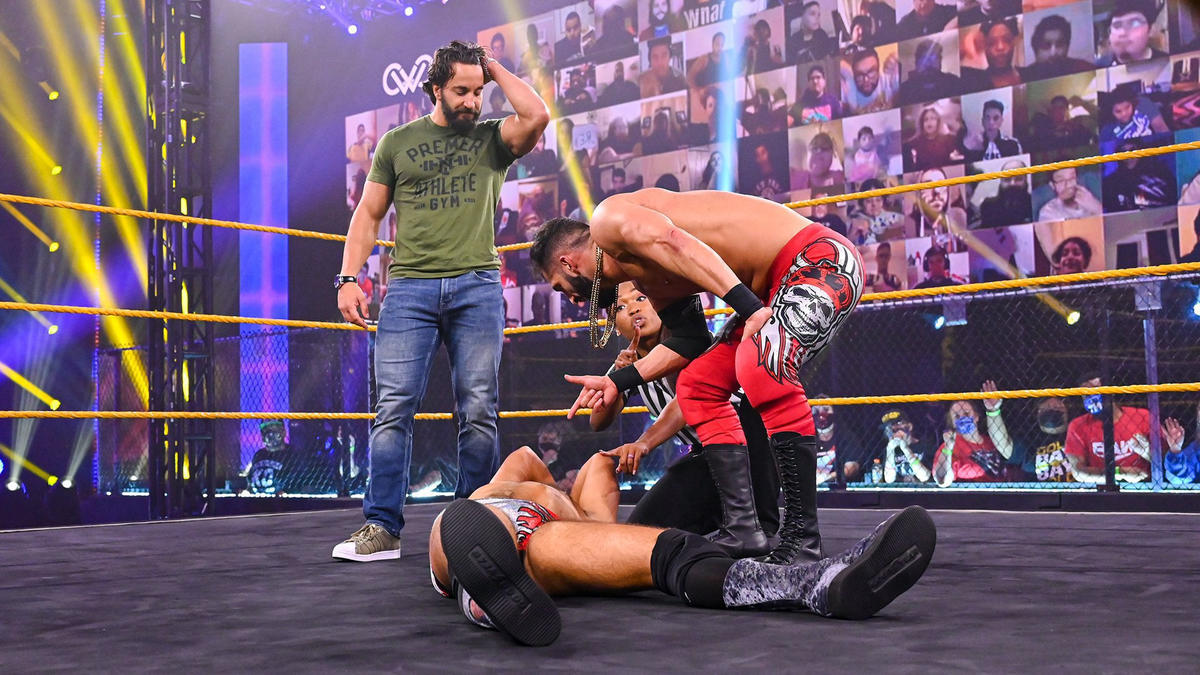 205 Live gave us get another rematch in an endless cycle of August Grey vs Ariya Daivari. Last week, Grey stole Daivari’s gold chains and paired them with an outfit I absolutely would also wear. In a backstage promo, Ariya and a shirtless Tony Nese jumped Grey and beat him down, leaving the 80s icon struggling before the main event. Nese later joined commentary for the match, sadly wearing a shirt this time, but we can’t win them all. Grey came out hot, getting a 2 count off a crossbody. He avoided the hanmerlock lariat and nailed Daivari with a super kick, then followed with some punches. A couple clothesline’s and Daivari tried to escape to the outside, but Grey wiped him out with a dive. Nese distracted him from commentary, holding up the chains Grey had taken last week, and giving Daivari time to get to his feet. In the ring, Daivari landed a drop kick and the hammerlock lariat to win, sending the 205 OGs home happy.