Time keeps passing, and Survivor Series is just around the corner. We had several qualifying matches this week to determine Team Raw and Team SmackDown, while it looks like NXT is no longer going to be in the mix. Maybe of the those outbreaks in the PC were bad for business after all. Monday night told us Keith Lee, Sheamus, and AJ Styles would be competing for Raw’s men’s team, while Nia Jax, Shayna Baszler, Dana Brooke, Mandy Rose, and Lana filled out the women’s. We also got Kevin Owens, Jey Uso, and Bianca Belair who qualified for the blue brand’s team. Not to worry for the rest of the roster, because if you’re not competing at Survivor Series, you just might be serving arsenic tea on a children’s show, or hooking up with a legend’s teenage daughter. So there’s plenty of other options. 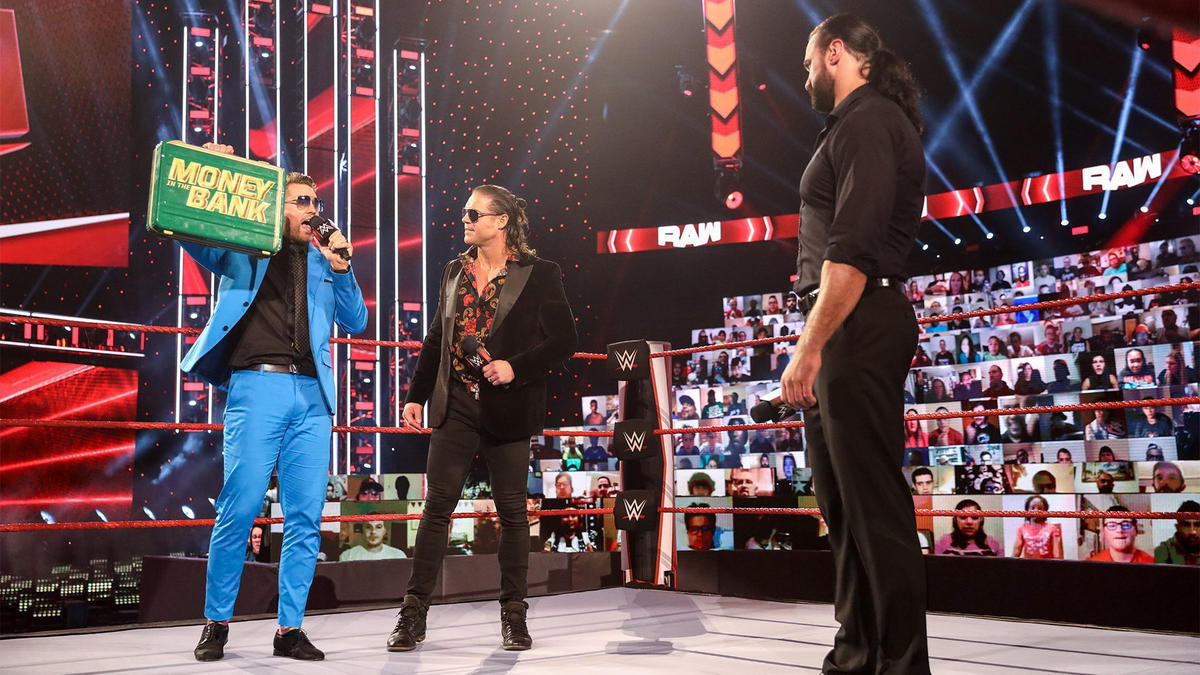 We always hear that the victors write the history books, and yet Sunday night’s big loser opened Raw with an impassioned promo about his favorite film, the prequel to Michael B Jordan’s Creed. Drew McIntyre promised us he would be WWE Champion again, and this was hardly the first time he’d been knocked on his ass in front of thousands of virtual fans. He was interrupted by the new Mr Money in the Bank, Miz, and my personal haircut inspiration, John Morrison. Miz reminded us that ten years ago, when life was simpler and we all talked about Breaking Bad on lunch break, he beat Randy Orton for the WWE title. He consoled Drew by suggesting that in 16 years he’d get another shot at the championship. McIntyre then dropped Miz, and after some great accent work from Morrison, Johnny Monday Delight joined his partner when he was tossed across the ring.

Later in the night we got McIntyre vs The Miz, in a short match that was arguably more fun than it should have been. Miz and Morrison have held on through various inconsequential feuds to reach this point, but their chemistry remains a highlight. I don’t know if I’m pandemic depressed or if “hey hey, ho ho, Miz and Morrison” is genuinely catchy. A cheap shot from his buddy gave Miz the edge, until McIntyre found a second wind and wiped out Morrison on the outside. He threw the briefcase from whence it came into the titantron, then landed a Claymore to win. 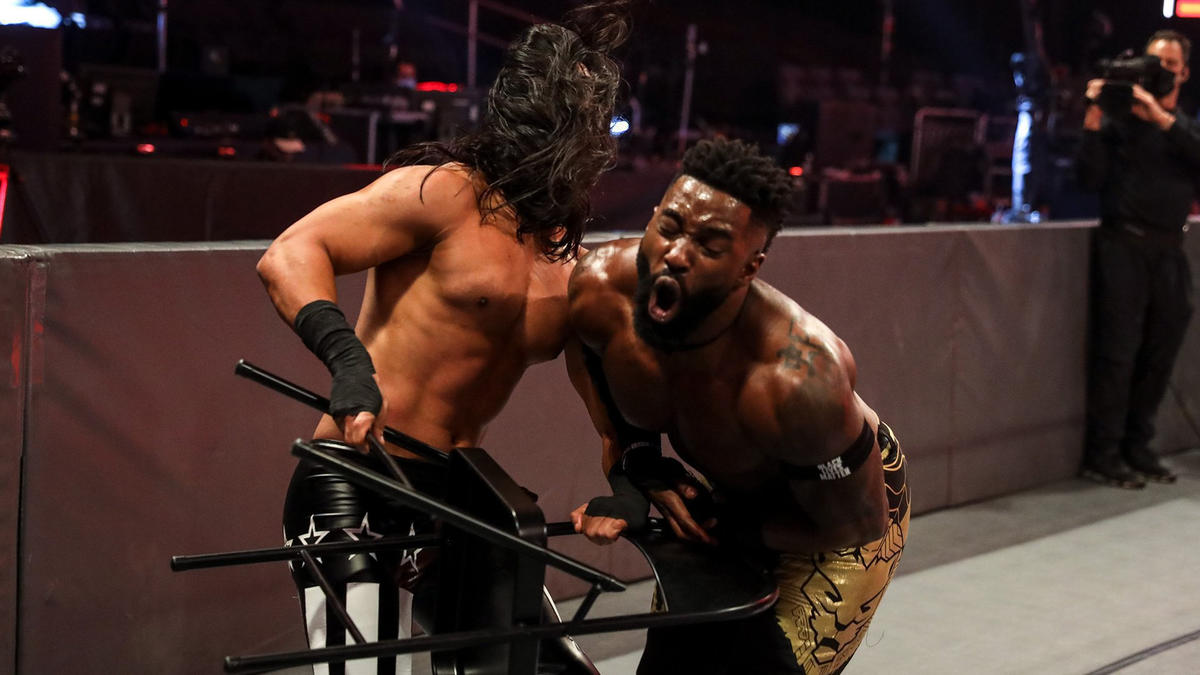 Retribution and The Hurt Business continued their feud even after a rather depressing squash from Lashley at Hell in a Cell. They competed in an 8 man tag elimination match, with Lashley and T-Bar starting things out. It looked bad for the masked crusaders as Lashley took control, hitting a flatliner on Retribution’s muscle. A couple tags later and Reckoning (previously known as Mia Yim in another world) had a fit on the apron, distracting MVP and allowing Slapjack to roll him up. Lashley then wiped out Slapjack with a spear in response. He and T-Bar fought up the ramp, eliminating them both from the match. A double team from Alexander and Benjamin to Mace, and It came down to Ali as the sole Retribution member. He grabbed a chair and attacked Alexander to cause a DQ, then fled before The Hurt Business could retaliate. If this leads to Ali and Alexander one on one I could forgive this lame booking, but I’m not gonna hold my breath. Later on, Ali claimed that Retribution wasn’t about “wins or losses,” which works out nicely considering how many L’s they’ve taken recently. I like Ali enough that I’d tune in to watch him paint a fence, but Retribution has taken a huge downward tumble over the past month or so.

I covered NXT’s Halloween Havoc here if you’re interested in Spirit Halloween mascots and the Cameron Grimes School of Acting. 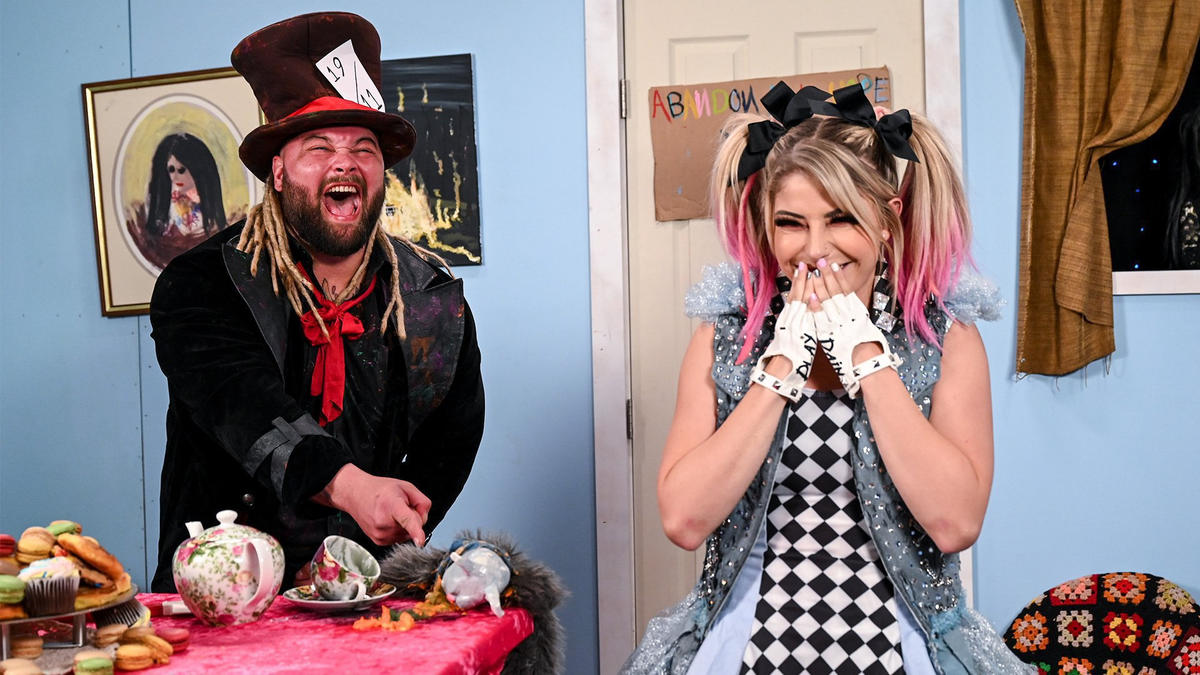 Firefly Funhouse gave us a Wonderland themed tea party, where Alexa Bliss tried to kill Ramblin’ Rabbit with some poisoned tea. Wyatt, donning creepy blue contacts, encouraged Bliss to “let him in,” and then beat a recovering Rabbit with a pipe. Later on, Randy Orton appeared on a Moment of Bliss, which potentially qualifies as one of the dumbest kayfabe things a wrestler has done, and that’s a high bar. She’s hanging with a dude whose ancestral swamp home you burned down, Randy! Proving that he had more than one brain cell, Orton was a little skeptical of Bliss’ motives, but it was McIntyre who ran out to attack. He was about to hit a Claymore when the lights went out, and The Fiend appeared behind Orton on the ramp. Randy chose the Scottish of two evils, heading back towards McIntyre as The Fiend looked on. The show faded to black with Orton dropping Drew through the announce table. Randy and Wyatt have plenty of history, and with Bliss and McIntyre still in the mix, this should be a fun feud. 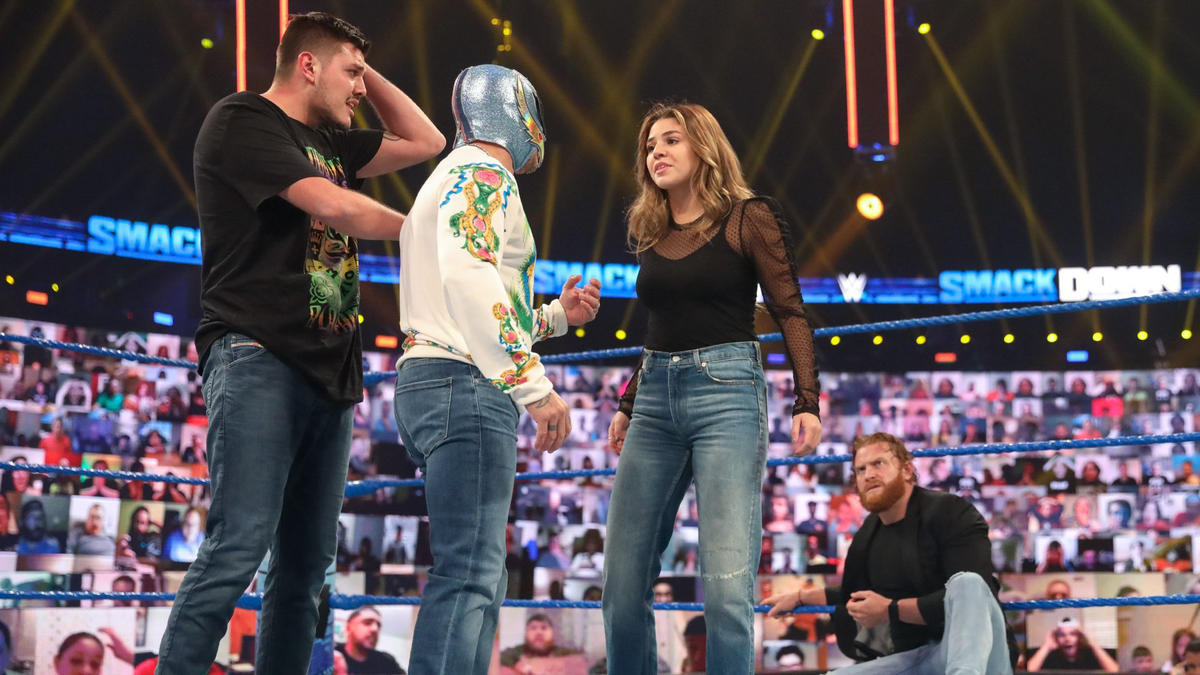 You know the drama when you’re 19 and in love with your dad’s 31 year old frenemy who regularly kicked both your dad and your brother in the face up until about a month ago? We’ve all been there. Aalyah and Murphy made their relationship plain on SmackDown this week, after Murphy tried to apologize publicly to the Mysterios for all the times Rollins had him beat them up. Instead of Dominik and Rey, it was Seth himself who confronted Murphy in the ring. He said the Mysterios would never accept Murphy and Aalyah’s relationship- but as someone who was very bad at Instagram himself, he was cool with it. Dominik came from behind and went after Rollins, prompting Murphy to drag him off and continue the beating himself. Dominik and Murphy then got into it, joined by Rey, who went for a 619 on Murphy but was stopped by his daughter. Aalyah said she loved this man who, until four weeks ago, was super tight with a dude who popped her father’s eye out. She and Murphy kissed, and Rey was left wondering why he ever brought anyone from his family to WWE. This storyline has lasted eons, and it’s lost a lot of steam along the way. Add in Aalyah’s Days of Our Lives acting, and the vague discomfort of watching a dude who was alive during the original Saved by the Bell run kiss a teenager, and I’m not having the best time watching this tepid romance bloom. I’m not sure anyone is. 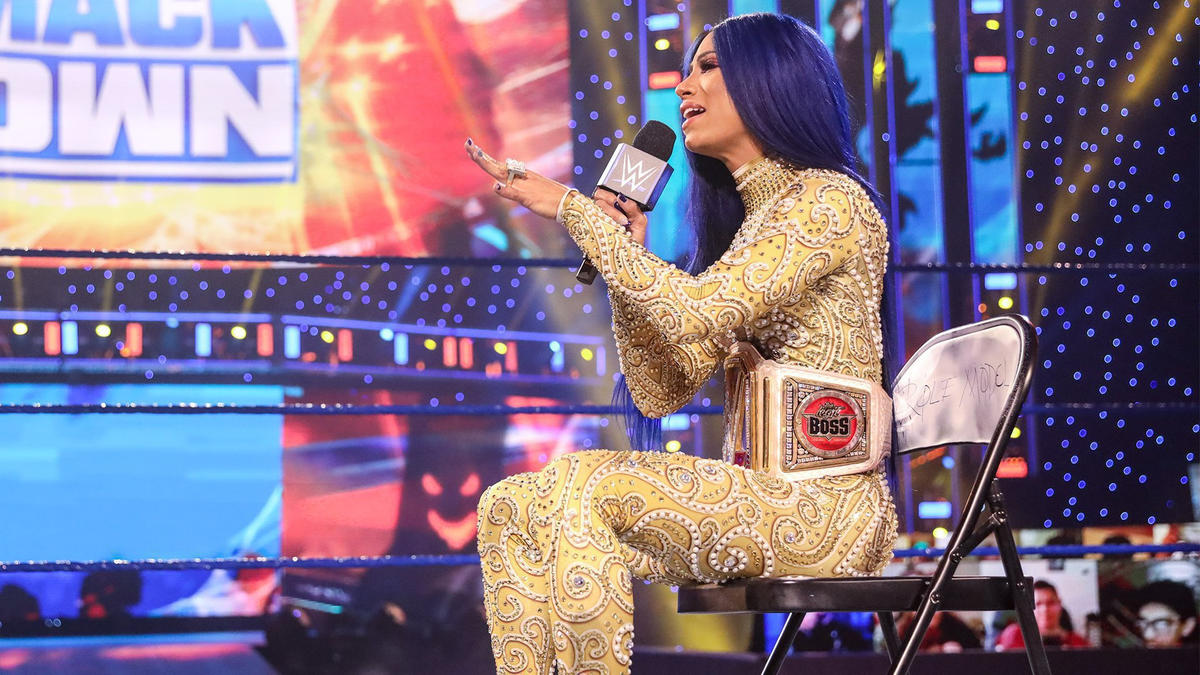 Sasha Banks bested the Role Model at Hell in a Cell, ending the night posing over the defeated body of her former best friend with her new title. She came out with the steel chair to cut a promo on Friday to tell us all that she had never needed Bayley as a partner. She was the winner, and it wasn’t their team that was unstoppable- it was only Sasha herself. Ears burning, Bayley interrupted and remind Sasha that while she’s capable of winning titles, she’s struggled to defend them. She then offered a rematch for the title next week to test that theory. While I’m not a fan of automatic rematches, something WWE has promised and failed to do away with, I can’t be upset about more Sasha and Bayley. Their HiaC match hit all the right notes, and I don’t hate seeing them go at it again. Let’s hope Sasha’s able to stay champion for a little longer this time around. 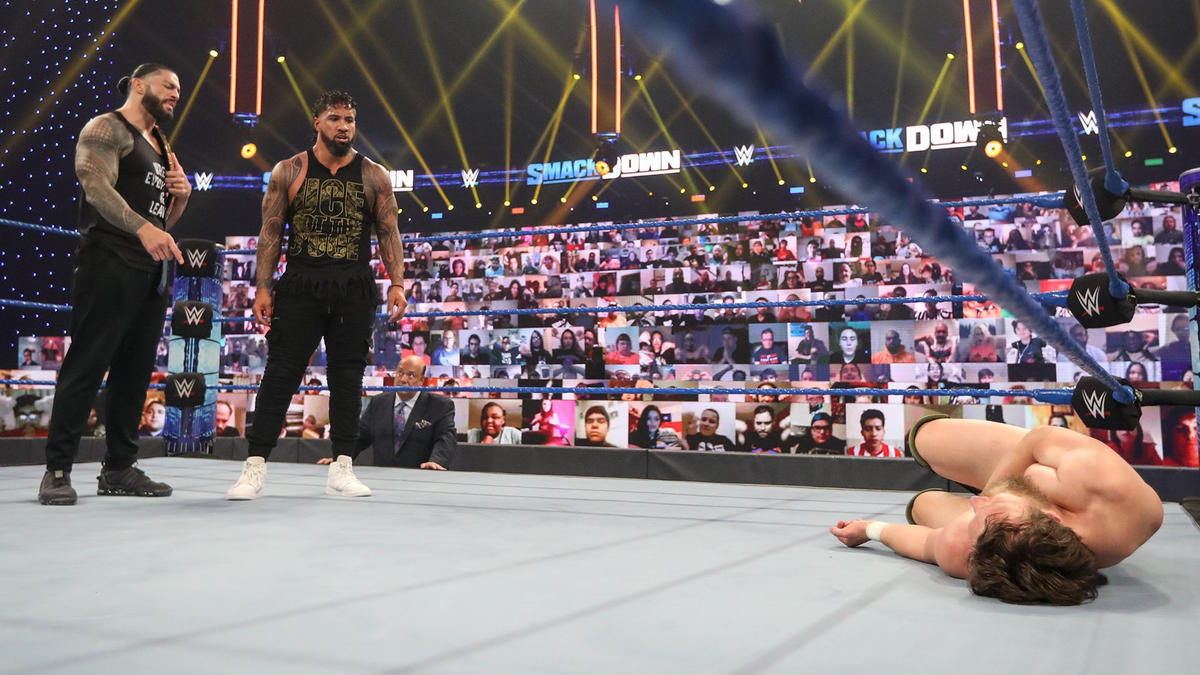 SmackDown opened with some much more entertaining family drama in the Usos and Roman Reigns. As Reigns won their Hell in a Cell match, he reminded Jey that if he didn’t “fall in line,” he would be kicked out of the family. Uso first refused, but seemed to understand the magnitude of his decision later in the night. He faced Daniel Bryan in a Survivor Series qualifying match, with Reigns entering midway though. Jey managed to escape from the LeBell lock and hit an Uso Splash to get the win over Bryan- but Reigns told him he wasn’t done yet. Uso declared his love and loyalty to Reigns, claiming he understood what the tribal chief wanted- Reigns instructed him to make Bryan understand as well. Uso pulled Bryan out of the ring and hit another big splash through the announce table, wiping him out, as a satisfied Reigns looked on. The emotion between Jey and Roman is great, and poor Bryan was a vicious display of Uso’s new commitment to the family. It’ll be interesting to see what Reigns is capable of now that he has his family fighting for him once more. 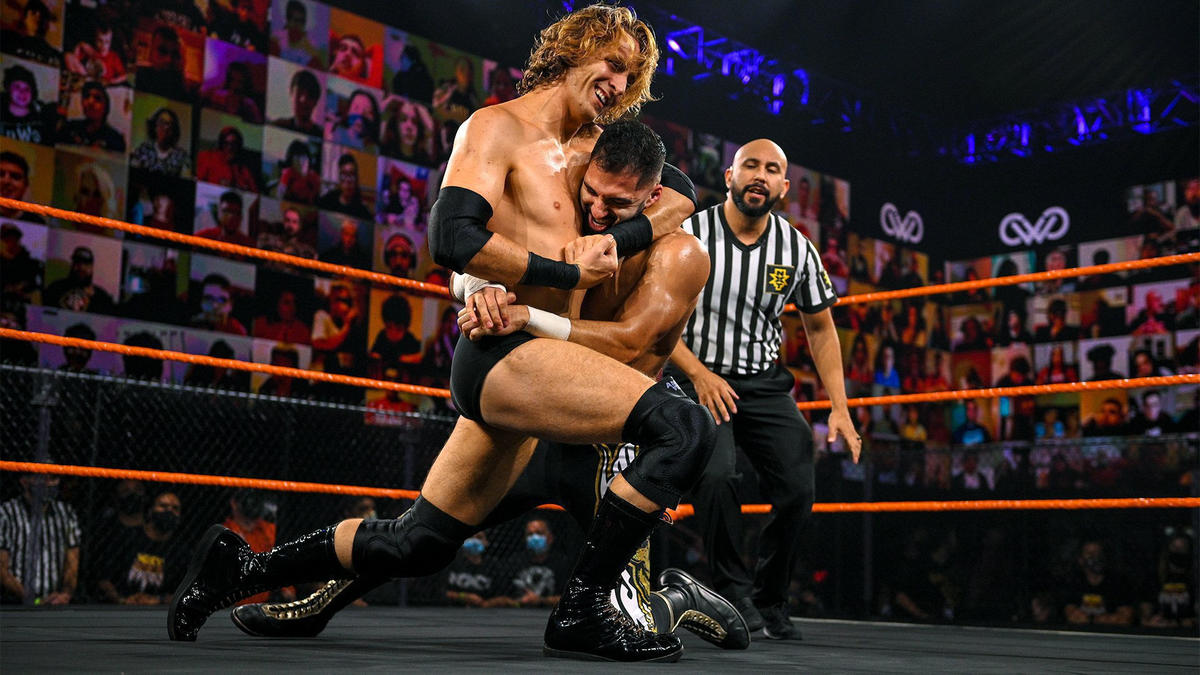 205 opened with Ariya Daivari taking on Curt Stallion in the never-ending struggle between Daivari and anyone successful and younger than him. I can’t fault him for that; those Stranger Things kids have it coming. Daivari tried to ground Stallion early on, assisted by fellow youth-hater Tony Nese. Nese and Daivari both beat Stallion on the outside, but in the ring, Curt got his knees up to block Daivari’s senton. The newbie almost got the win wiht a DDT, but Daivari came back with a Persian Splash for his own two count. Nese tried to interfere again, but Stallion hit him with a headbutt, then pinned Daivari with a roll up to win. A bit surprising, but a solid win for Stallion in the cruiserweight division.