It’s the final week of shows before WrestleMania, and one would think that could inspire some originality. Sadly, we were treated to a very paint-by-the-numbers Raw that could have aired somewhere between Backlash and Extreme Rules. SmackDown seemed more up to date, but they got a leg up by ripping off several matches that probably would have aired at Mania on a normal year. NXT stood and delivered, while 205 gave us a clip show of the best CW championship victories. Where are those champions now? In the André the Giant Memorial Battle Royal. 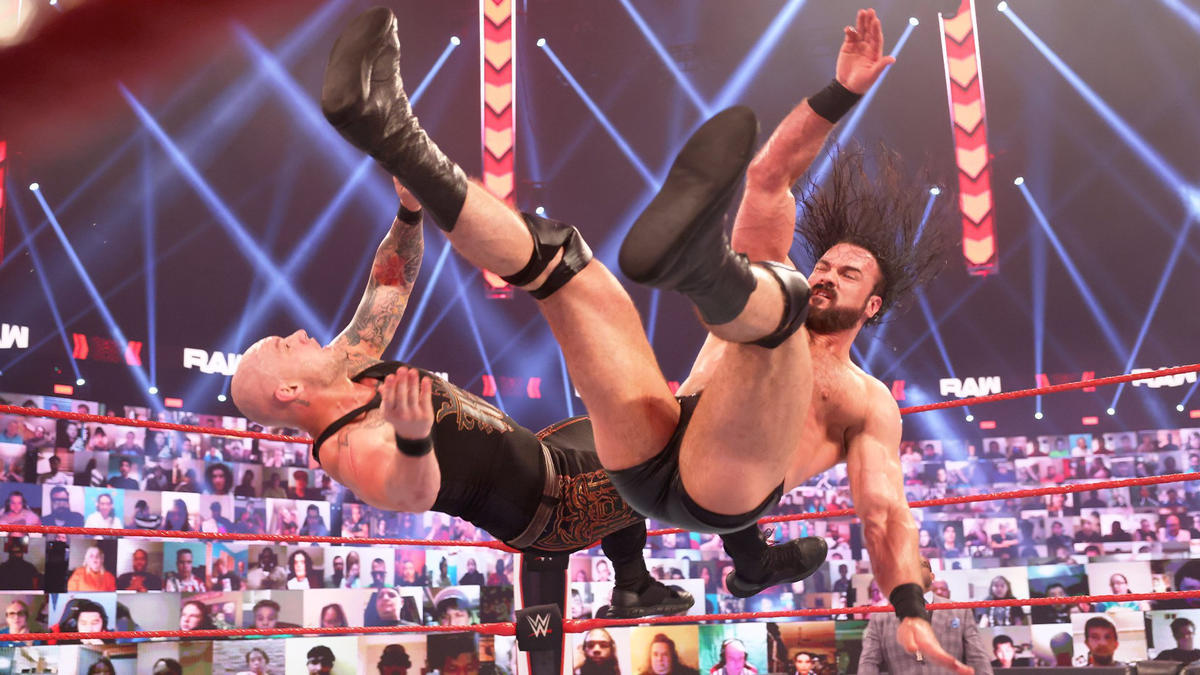 Drew McIntyre opened Raw again this week, sword and all, to talk more trash about Bobby Lashley. He reviewed the past year and his own progress as WWE Champ during a year that everyone hated. He said his only option was to regain his championship this weekend, which brought out Lashley to remind him that there’s no shame in the 24/7 Division. Lashley claimed Drew was terrified of him and The Hurt Lock. Drew pretended to consider a life of Uber driving before he doubled down on his wrestling career and offered to go at it right then and there. MVP stepped in to save ticket sales, instead sending King Corbin out to fight McIntyre on Lashley’s behalf. Do kings usually work for other people? Maybe it’s time to let that gimmick go. Corbin told Drew he shouldn’t worry about Mania, since he wasn’t even going to make it to Saturday.

The resulting match later in the main event was fine enough; McIntyre got control early on, using his power to wear down Corbin. MVP was great as always on commentary while Drew stomped away on the King. Corbin took over by slamming McIntyre into the ring post and off the desk. Corbin landed a suplex for a near fall, then delivered a series of elbows right to Drew’s well shaped head. The headbutt and Future Shock DDT got Drew a two count; MVP came ringside to remind Corbin of the goal here—taking McIntyre out. He handed the King his cane, but Drew ducked and landed a Claymore to win. McIntyre looked up at the pirate sign with misty eyes, while MVP walked away disappointed but not surprised. 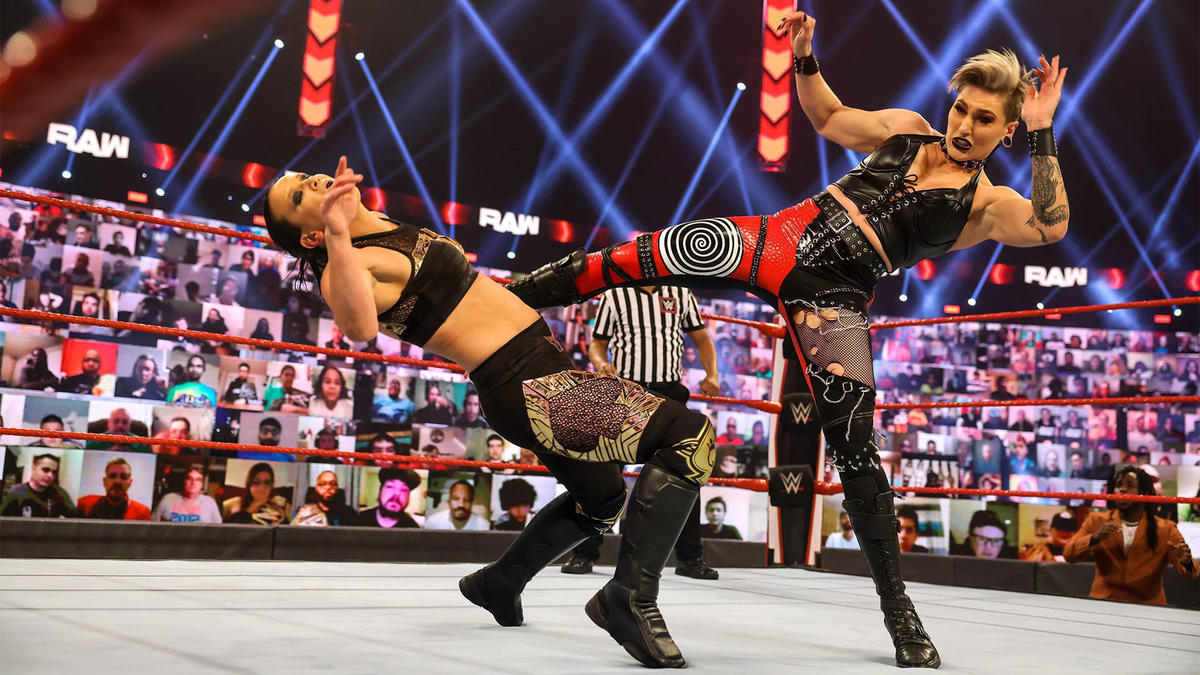 Rhea Ripley and Asuka were forced into their get-along shirt this week when they faced Nia Jax and Shayna Baszler. The “reluctant” partners gag has been done a lot lately, notably literally just last month with Belair and Banks facing the same team of Baszler and Jax. As one might expect, things were far from smooth sailing for the champion and challenger, with Ripley refusing to tag in until Baszler and Asuka had gone back and forth for a while. She entered to face Jax, narrowly escaped a slam, and tagged in her partner once more. Reginald caused a distraction to let Baszler take over and the heels dominated Ripley. Asuka reluctantly tagged back in to nearly put away Shayna, but Ripley decided she’d had enough and bumped Asuka off the turnbuckle, letting Baszler get the win. Unfortunately, even with the amount of talent in the ring, this was pretty pointless as far as women’s matches go. And still they managed to fit in a Reginald spot. This man has some serious dirt on whoever books the women’s division. 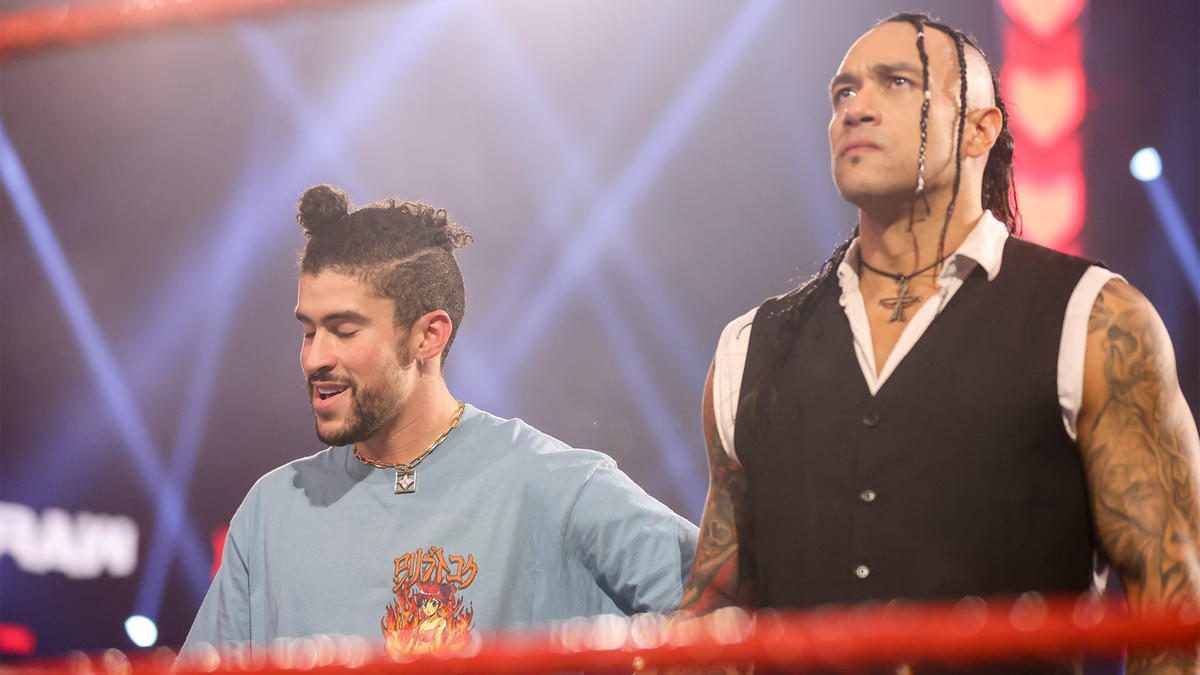 Bad Bunny has been a delight in WWE: from live performances to punching Miz to giving R-Truth the 24/7 title simply because he felt like it, the man has shown he not only admires wrestling, he understands how to work in this world. He furthered that on Monday night when he came out and cut promo better than most things we’ve seen from champions this year. After Miz and Morrison trashed his car and tried to jump him from behind, the Bunny called out the A-Lister for being kind of a d-bag since he arrived. He talked about watching wrestling with his family as a kid and all the guys he used to look up to—including Miz. He said Miz used to be one of his favorites, but after all the stuff Miz and Morrison have pulled, he knows they don’t respect him. He promised to show Miz how respect works at Mania in a tag match with Priest on Sunday. Miz and Morrison popped up on the tron to tell Bunny he doesn’t belong in this world, and slowly drove away in their limo. Bad Bunny has clearly done his homework and is putting his all into this, I’m excited to see what he’s capable of at Mania. 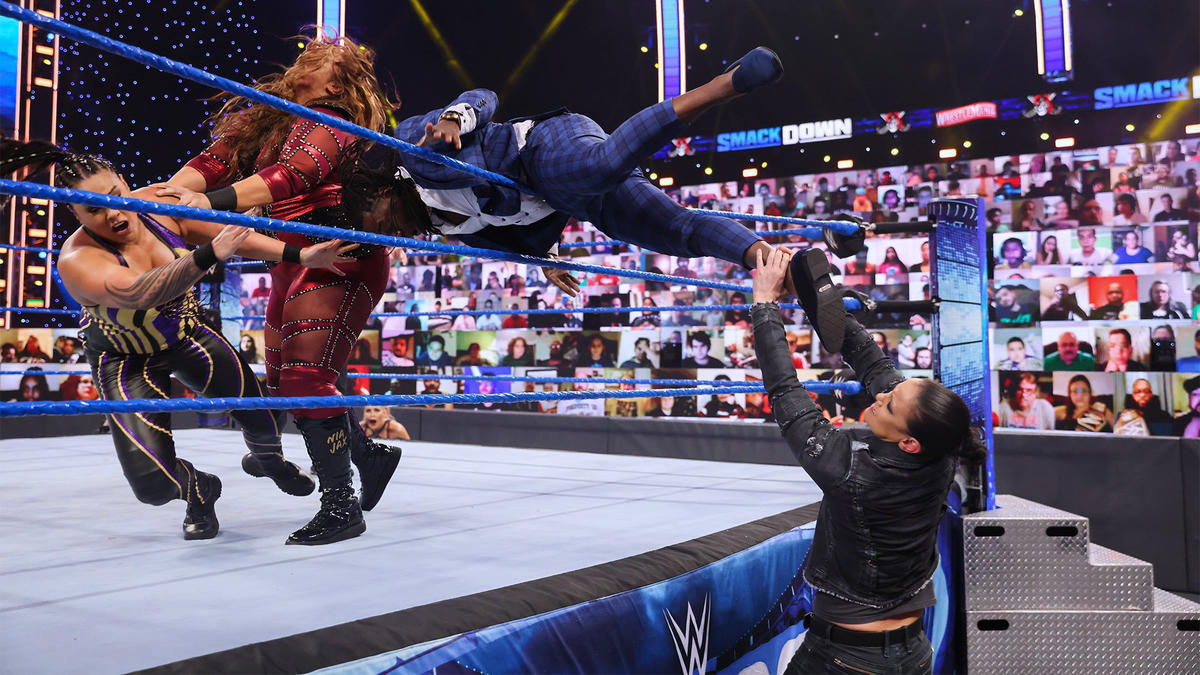 The women’s tag belts are up for grabs on Mania, while the men’s SmackDown titles were contested on SmackDown. (The Dirty Dawgs retained.) Women’s wrestling has truly come so far. Friday night we saw Tamina take on Nia Jax ahead of the multi-team #1 contenders match on Saturday. Unsurprisingly, we got a Reginald spot early on. Tamina tried to pull the sommelier off the apron, but Shayna grabbed his feet, and the two tugged this grown man back and forth. Jax briefly took advantage, until Tamina sidestepped and sent her into the ring post. Baszler tried for another distraction, but Natalya was out to even the odds. Tamina got a Samoan Drop on Jax, but Baszler broke up the pin and caused a DQ. Backstage, The Riott Squad said they were better then ever after ditching the dead weight (talking about Billie Kay, who was standing right next to them). Mandy and Dana came out to join, followed by Naomi and Lana, and everybody started fighting again. Tamina and Natalya stood tall at the end of the brawl, which probably means their chances on Sunday are slim. 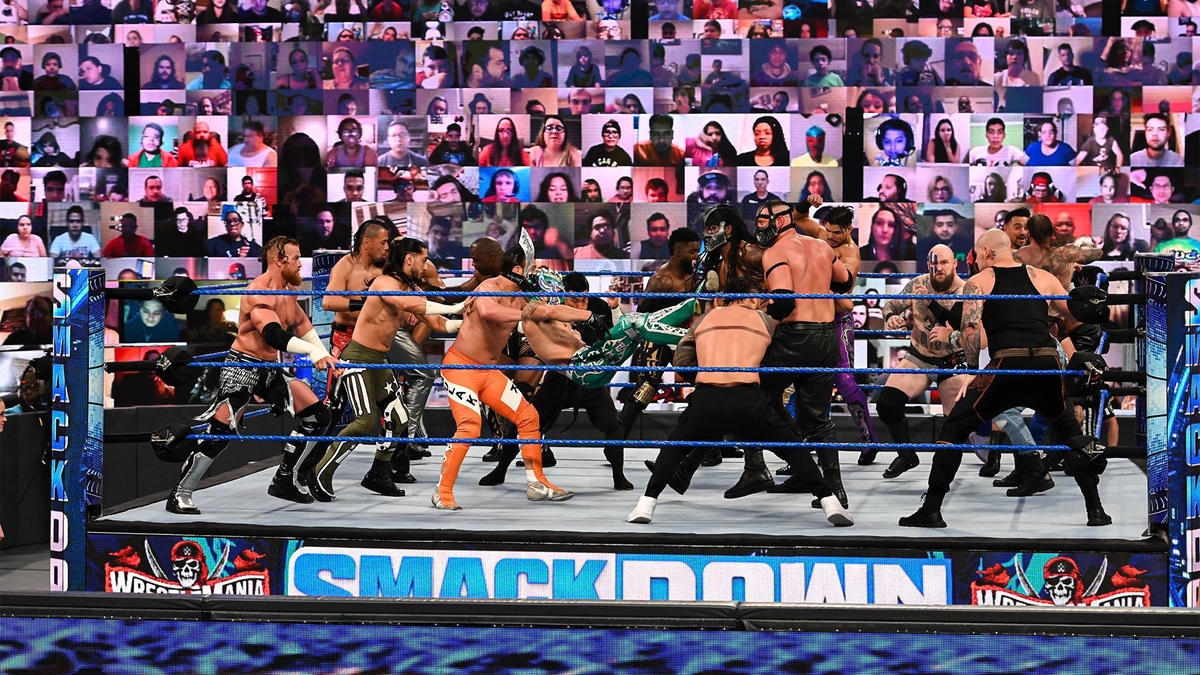 This year, the Andre the Giant Memorial Battle Royal faced the same fate we will all one day contend with: getting bumped to the SmackDown before Mania. We had guys from both brands here; Shelton Benjamin and Cedric Alexander teamed up early on to score some eliminations, before all the other participants ganged up to get rid of them. Elias and Ryker worked together and dumped Erik, while T-Bar and Mace got rid of Drew Gulak. Ali eliminated both former Retribution members with a little help from Murphy, which is a storyline that will surely go nowhere, despite how badly I want it. Ricochet took out Ali, but was then eliminated himself by Uso. Our final three were Uso, Corbin, and Nakamura. Uso hit a superkick and tossed Corbin to the apron, and Shinsuke finished him off with a knee. Nakamura tried for the Kinshasa, but Uso countered into a super kick. Still, Shinsuke pulled through to land the Kinshasa, only for Jey to come back and send him over the top rope anyway. While the battle royal sadly isn’t the most prestigious award anymore, it’s nice to see Uso get some flowers. Even if they’re the plastic kind that only get brought out when company is over. 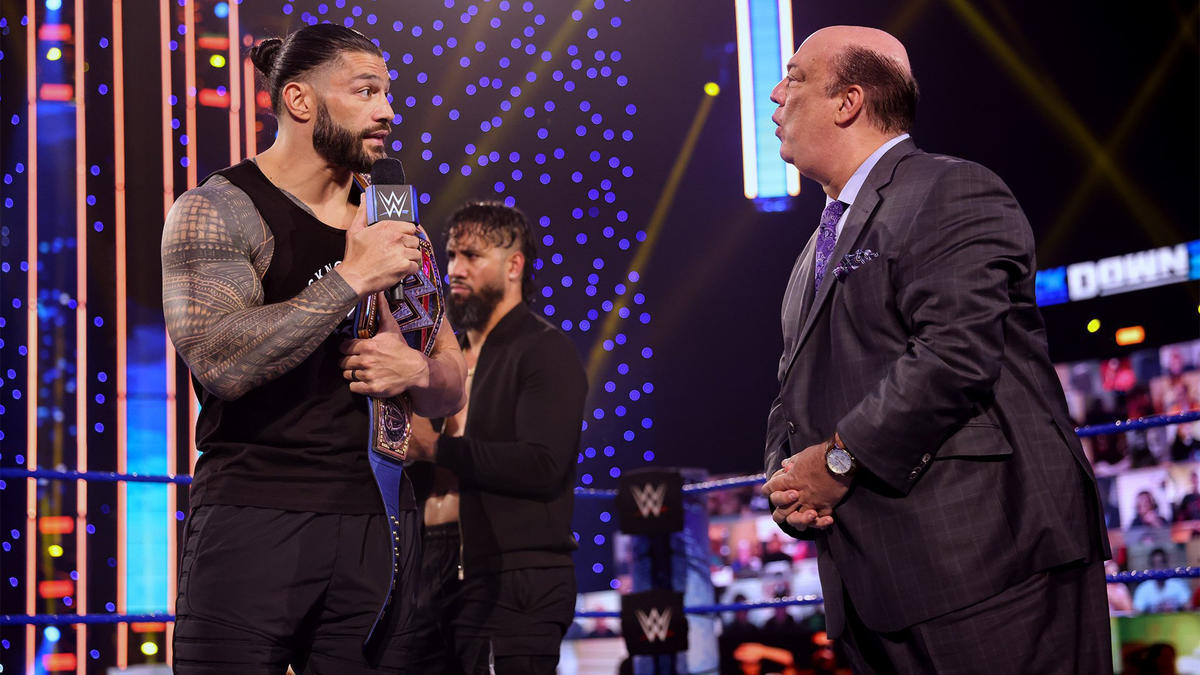 With 48 hours until three fathers rip each other limb from limb, Edge, Roman Reigns, and Daniel Bryan all made their final statements on Friday night. Bryan started SmackDown by reminding us that he was the yes-man, and he’d beaten the odds before and planned to do it again. He promised the “most dangerous Daniel Bryan they’ve ever seen” at Mania. Maybe he’ll come out in pleather trunks or something. A little later on, Edge and his trusty chair made an appearance. He talked about attending his first WrestleMania as a kid, and how he’d accomplished all of his goals since—except ending his career on his own terms. Edge decried Bryan for weaseling into the match between him and Reigns, especially after Edge had fought so hard to take his career back. He offered a little more respect for the champ himself, likening Reigns to himself in his early days. Roman was the final one to close out SmackDown, praising himself as a long reigning Universal champ. He, correctly, said that whatever he does for the company, WWE is always winning when they put him out. He promised to make Edge and Bryan acknowledge him as the head of the table on Sunday. Great promos from all three guys for a very exciting match. I can’t get enough of Reigns arrogant persona; he’s just so damn good.

Sony Lacked a "Vision for What the Vita Could've Been," Says Former Employee