For being thrown together in less than a week, and coming on the heels of a fairly mediocre party of the summer, Payback was a pretty fun show. There were actually more than two matches I actually enjoyed watching, which is never guaranteed when I turn on WWE. I guess they stuck to the old business saying- if you produce literally 25 hours of content in two weeks, some of it is eventually bound to be entertaining. 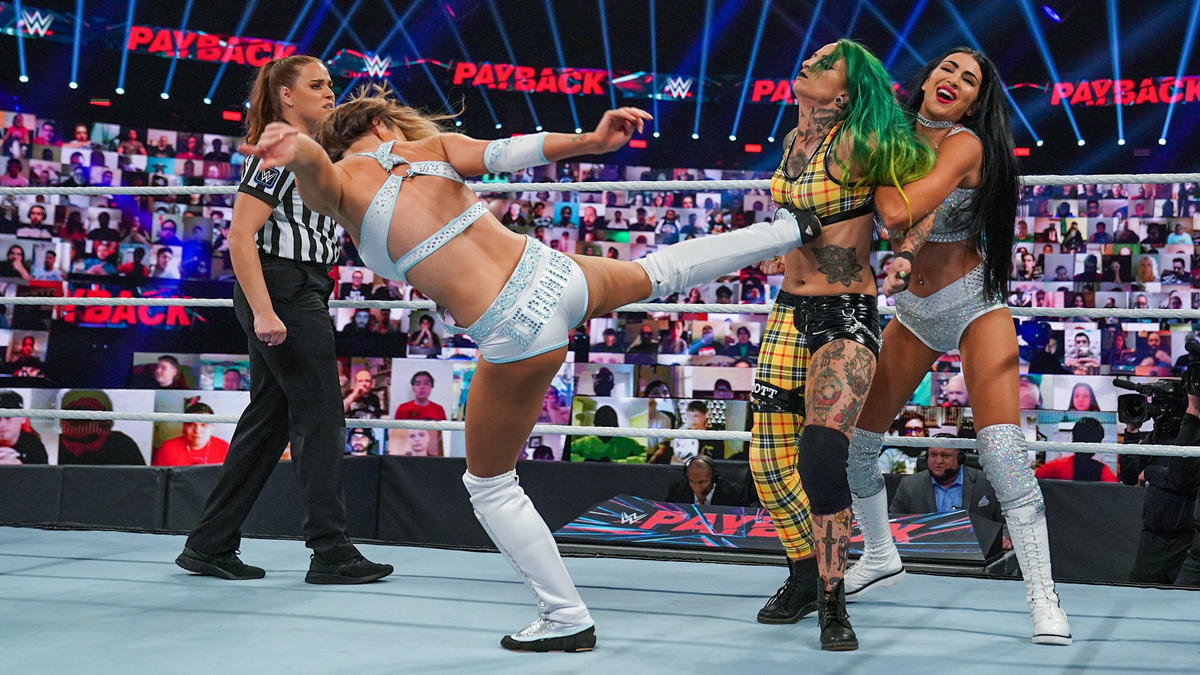 This match was kind of just there. I get that’s the point of the kickoff show, but it could have at least been a #1 contenders match for the tag titles to make it feel more important than their bouts on Raw. Instead, it was simply a continuation of this feud we’ve seen for the past six weeks, without a ton of changes. There was some brief tension in the Riott Squad, with the IIconics insisting a sneak hit from them to Morgan was the result of Ruby. The two seemed reluctant to tag each other in at first, but Morgan still made the save after Riott was pinned following a double team move. Liv and Ruby hit Billie Kay with some double knees and then the Riott Kick to get the win. 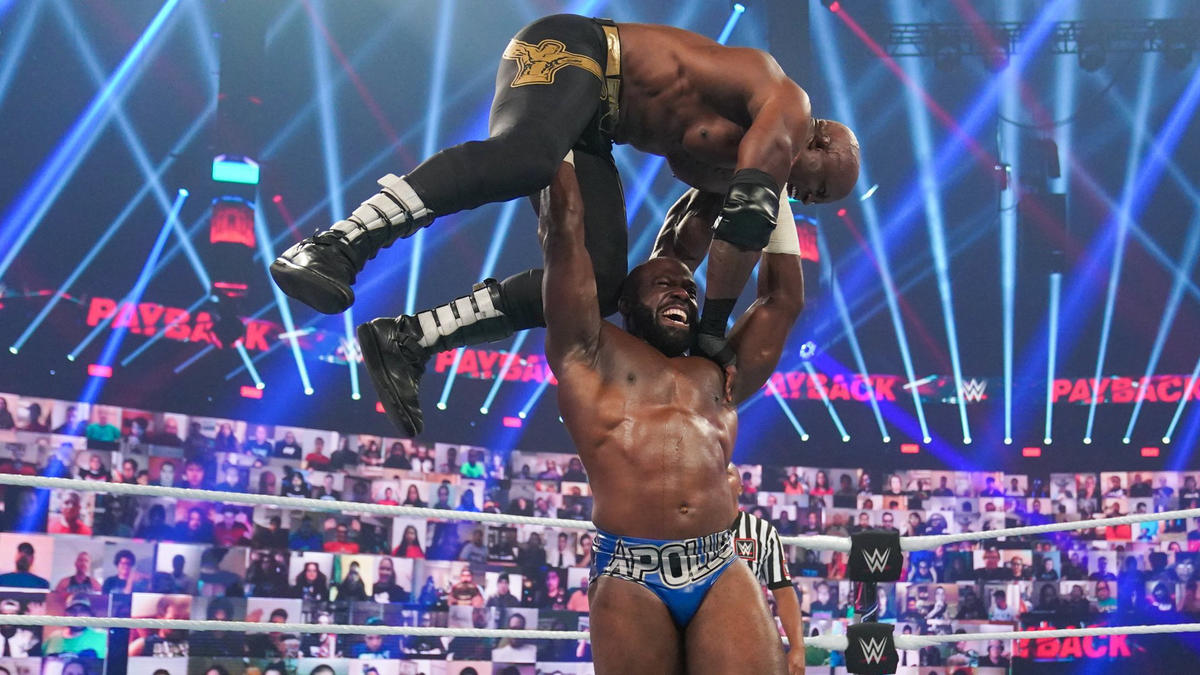 By far the best match of the Crews/Hurt Business saga. Lashley has really been rehabbed with this stable; I can barely remember when he face planted in cake at his wedding or had a personal ass cam. He and Crews were really good together in a way MVP never quite seemed to click with Apollo. Crews got to hit some great athletic spots, including his standing moonsault and a huge frog splash, but Lashley kept kicking out at 2. MVP and Shelton Benjamin sat ringside in their best PTA meeting suits, shouting advice for Lashley as he tried to control Crews. Apollo was bouncing back with a series of German suplexes, but Lashley hit a clothesline that knocked him down. When Apollo got back to his feet, Lashley locked in the Full Nelson and the champ tapped out. MVP dragged a cameraman over to do the photo op gimmick, which is honestly hilarious, and The Hurt Business ran off to pop champagne and buy more cool suits. I love Crews, and while I wish he could have had a longer reign, Lashley has really been revived teaming with MVP and Benjamin. He has that monster presence again, making him feel like a huge heel champ who could really turn out some great matches.

This started with a replay of the very excellent Big E promo from Talking Smack, where he ran down Miz for suggesting he needed to “get serious” in order to succeed. E has shown he doesn’t have any plans to change who he is, but he’s still willing to throw Sheamus’ Newsie ass around the ring. The premier fella was in control for the first half of this, trying to cut down his opponent by working on his legs. Big E turned things around when he hit a spear through the ropes, dropping Sheamus on the outside. When they got back inside, Sheamus escaped the Big Ending and hit a huge knee, which only got him a 2 count. He then went for the Brogue Kick, but E caught him and hit a powerbomb, followed by the Big Ending to win. This was a really good match, with absolutely the right ending. Big E’s rise as a singles star should be a treat to watch, and when we get E vs Roman for the Universal Title, it’s gonna tear the house down.

I didn’t watch this one because Matt Riddle’s been accused of sexual assault and I’m not really interested in seeing him do suplexes. WWE even made reference to Riddle’s “troubled home life” in storyline, in case you didn’t feel bad enough tuning in to this week’s show. I was watching the Jaws ride episode of Defunctland during this, and I suggest you do the same. 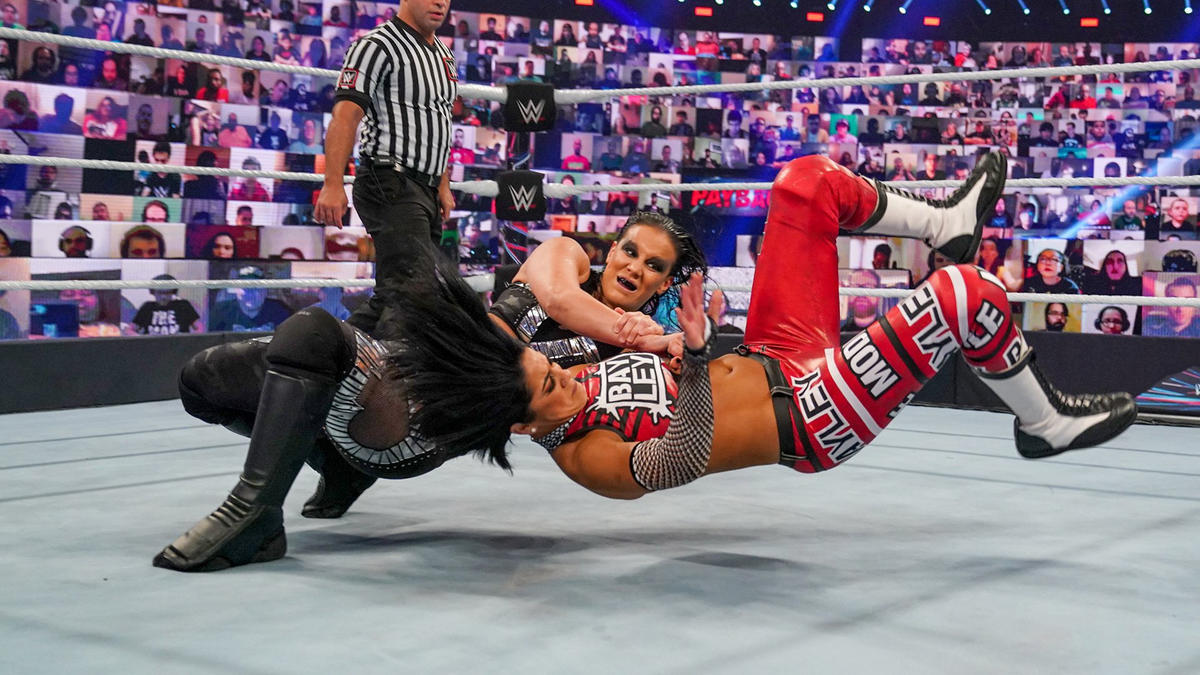 I don’t know why WWE has such a boner for creating the most random tag teams, but they’re just super into it. Nia Jax wanted to start the match, but Baszler tagged herself in. She got the upper hand over Banks immediately, backing her into the corner. The Golden Role Models pulled some shenanigans to get Shayna to knock Jax off the apron, and the champs took control. Bayley and Sasha both struggled to keep the upper hand when Jax came back, as she powered out of their double team and barely stayed down for a two count. This match did a great job of making both Jax and Baszler look incredibly dominant throughout. Jax got some huge power moves in, while Baszler showed off her submission move set. The finish came when she got Bayley in the Kirifuda clutch, while also bending Banks’ legs into a submission to hold her in place. Bayley tapped, giving the rag-tag new team their first championship. As predictable and boring as it is to throw together two singles stars instead of working on an existing team, I can’t say Baszler and Jax didn’t show off here. Shayna’s double submission certainly solidified her to any casual fans who might not be familiar with her NXT run. 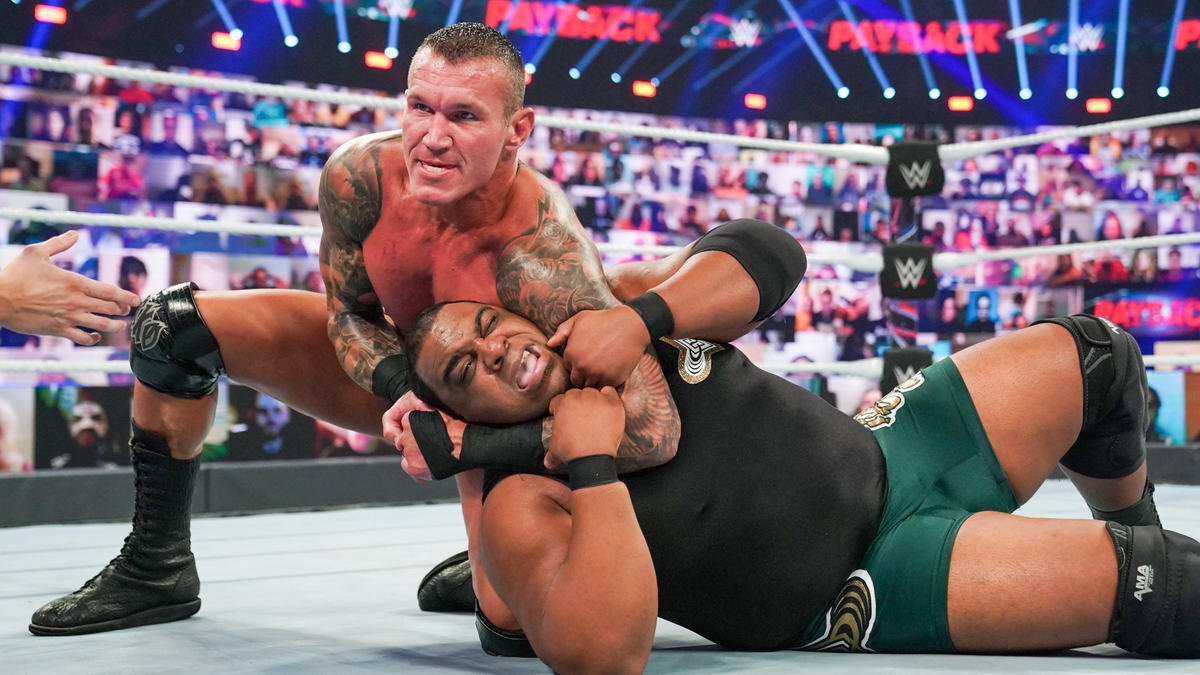 This match felt shorter than it should have been? What we got was definitely good; both guys seem capable of working well with just about anyone. Lee displayed his speed and agility, taking down Orton with a quick crossbody. Orton reminded Lee that he was the Legend Killer, and he was getting way better on Twitter, so he deserved respect. Lee tried to run him down on the outside but Randy was able to evade, sending Keith crashing into the ring post. He then threw the limitless legend through the announce table and pulled him back in the ring. Lee fought out of a headlock and literally tossed Randy out of the ring with absolute ease. Orton hit his draping DDT and signaled for an RKO, but Lee saw it coming. He scooped Randy out of the air to deliver a Spirit Bomb, and that was all she wrote for the Viper. Wild to see Orton lose in what was honestly a very brief match, but seems like a huge sign of great things to come for Keith Lee. 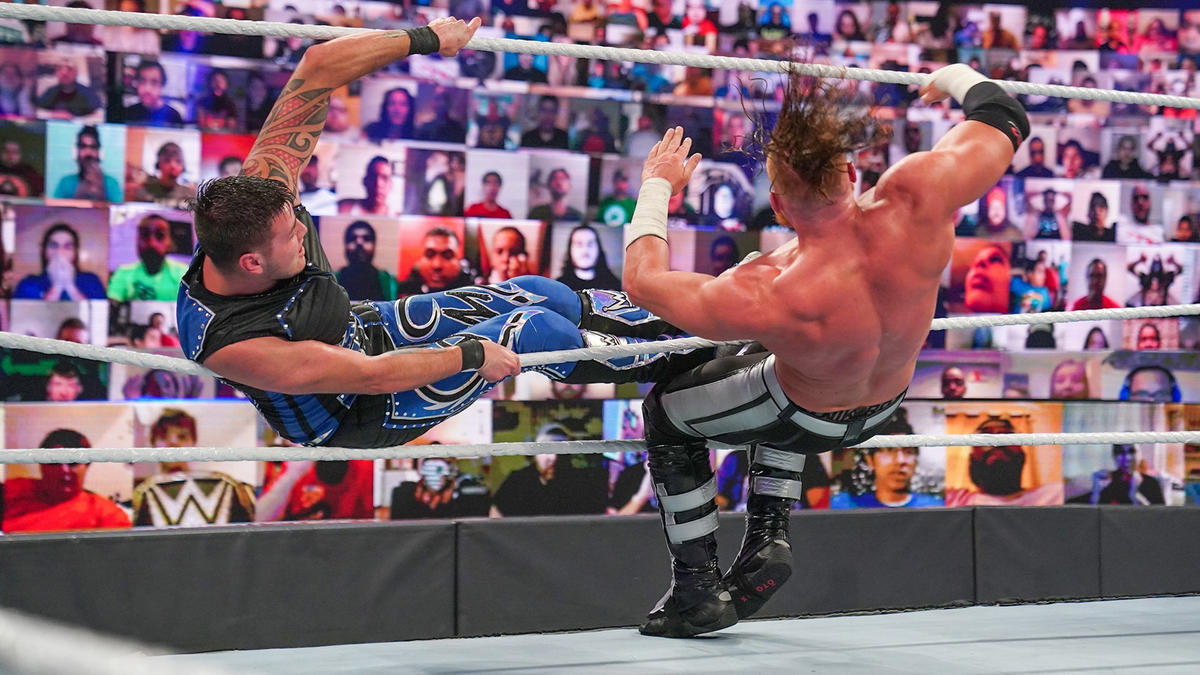 Another great showing from Dominik here; he’ll surely main event this years mania with Pat McAfee. The Rollins and Mysterio feud has stretched on far too long, but this was a nice closing (hopefully) act. The Mysterios came out strong, with Dominik taking out both Murphy and Rollins on the apron. The heels didn’t take long to fire back, double teaming Rey and keeping him away from his son like a corrupt judge in an episode of Franklin and Bash. When Dom finally got in the ring, Rollins hit the Falcon Arrow, but Mysterio wouldn’t stay down. Kicking out of the Falcon Arrow? This kid’s going places. Rollins teased Rey about watching his son get his ass kicked, but this has been going on for like a year now, so he has to be a little used to it by now. On the outside, Murphy and Rollins dropped Dominik into the barricade, then isolated Rey in the ring. Rollins ordered Murphy to “kick him in the head,” but the Australians have a different sense of direction, and Murphy instead nailed Rollins as Mysterio ducked. Dominick then tagged in and threw his dad like a sack of potatoes across the ring to take out Rollins. He hit the 619 on Murphy, then landed the frog splash to get the win for father-son relationships everywhere. 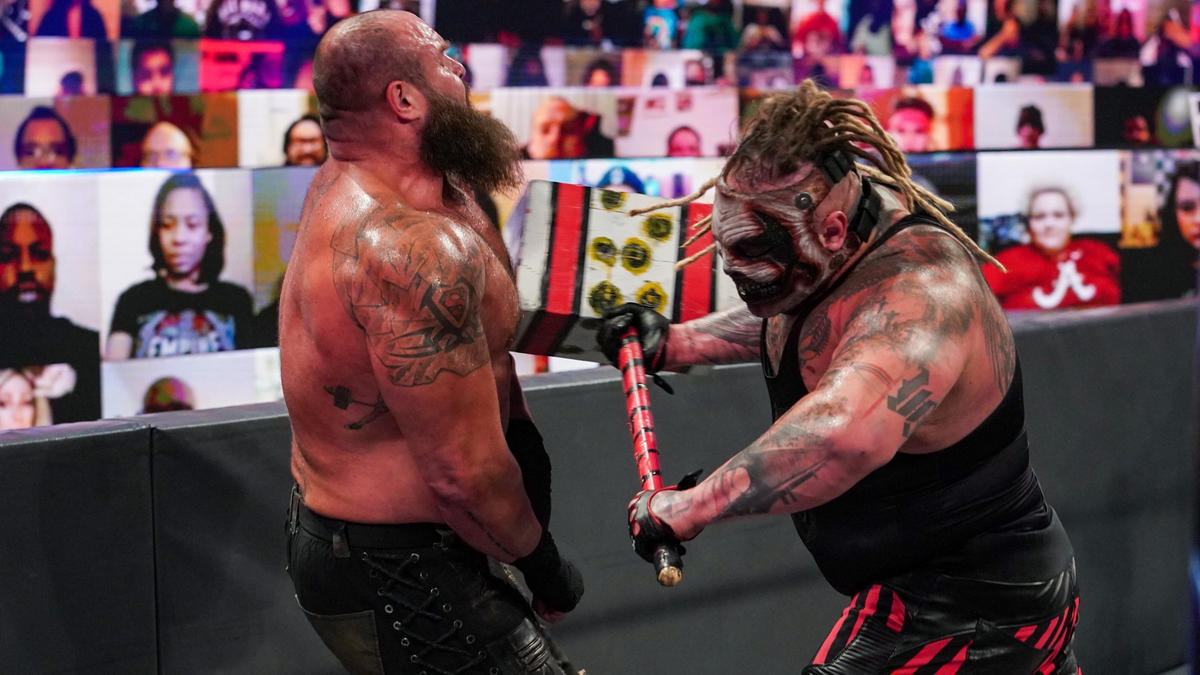 Strowman attacked during the last seconds of The Fiend’s lengthy entrance, but I don’t think anyone was really that mad. There’s only so long I want to watch a dude experiment in how slowly he can walk. The two went at it for a while with no Reigns in sight, tossing each other around on the outside. The Fiend planted Braun through the commentary table and then grabbed his hand-painted giant mallet from below the ring. He slammed Strowman into the barricade like he was cracking open a delicious crab for lunch, the followed it up with the good ole neck snapping move. Braun battled back, and the two fought up the ramp to throw one another into the screen. Strowman jumped off the stage to crush the Fiend, then dragged him back to the ring. Wyatt got up and hit a superplex, which imploded the ring and sent Charles Robinson acting his little heart out as he dramatically flew over the ropes. Reigns took advantage and made his entrance, coming down and immediately taking a chair to Strowman and Wyatt. The Fiend tried to get the Claw on Reigns, but he fought out with a low blow. He landed a spear on Strowman to win the match and regain the Universal Championship. This match was quick and fine, which is probably the highest praise I can give anything involving Strowman. Reigns as champ is excellent, and I’m very excited to see where he goes with Paul Heyman.

Every PPV should wrap up by 9:30. Every single one.