Well, this show happened. Some ups, some downs, some head scratching moments. A mixed bag filled with an acid-trip in the PC parking lot, more near-falls than you can shake a stick at, and the most TV time some of these NXT recruits will ever see.

Do we need a kickoff match for a 3 hour long PPV? Who knows. We got Apollo Crews making his first title defense against Andrade here, with new friend Kevin Owens on commentary, complete with a tie over his sleeveless tee. There was some back and forth early on, a lot of yelling from Zelina, before Apollo hit a slam and the standing Shooting Star Press. He went for the cover, but Garza came in with the distraction, keeping the ref from counting 3 for Apollo. Kevin Owens jumped off commentary to even things out, and Apollo was able to hit a spinning powerbomb and retain. Crews and Owens are a fun pairing, and Garza was wearing some green velvet pants, so I’d call this a highlight of my night.

This match played up the Triple Threat stipulation and kept the action moving, which helped it a lot. Each team had their chance to shine, and we saw some brief team ups between the two heel teams before each woman went into business for herself. After a brawl between all 6, Bayley and Royce took out Nikki Cross, so Alexa came into clear house and show off her gymnastics skills. She went for Twisted Bliss off the top onto Royce, but Banks came in and threw her off the cover, stealing the win for her and Bayley. Friendship lives to fight another day.

The fact that commentary refrained from a “urine trouble” joke was mind-blowing here. The build for this feud was a little shaky, but both Hardy and Sheamus are talented enough that it could still end up a solid match. Sheamus got to look as dominant as we’ve seen since his return this year, throwing Hardy around and grounding him on the mat. Sheamus managed to stay on top, but Jeff kicked out of almost everything. He even landed a Swanton Bomb, but Sheamus got his foot on the bottom rope. After Sheamus rolled to the outside, Hardy ran right into a Brogue Kick. Sheamus got him back in the ring to hit another and get the win. Honestly, this was the first match where I really started to check my watch. It felt like it overstayed its welcome by a handful of near falls.

We started off with Asuka trying to ground Jax, jumping on her back with a Sleeper Hold. No matter what submission she tried, Jax wouldn’t stay down. After fighting to the outside, Asuka had Nia in an arm bar, and Jax had to throw her opponent into the barricade to get out. Both women reached their feet just at the count of 10, declaring a double count out where Asuka retained.

Lame finish aside, this was a fine match- not really anything more. Jax produces mixed results among fans, and while I find her much more effective as a heel, her in-ring style is a bit slow against Asuka’s fast paced offense. I wouldn’t be surprised to see Jax with another title run down the line, but the right outcome was Asuka retaining. 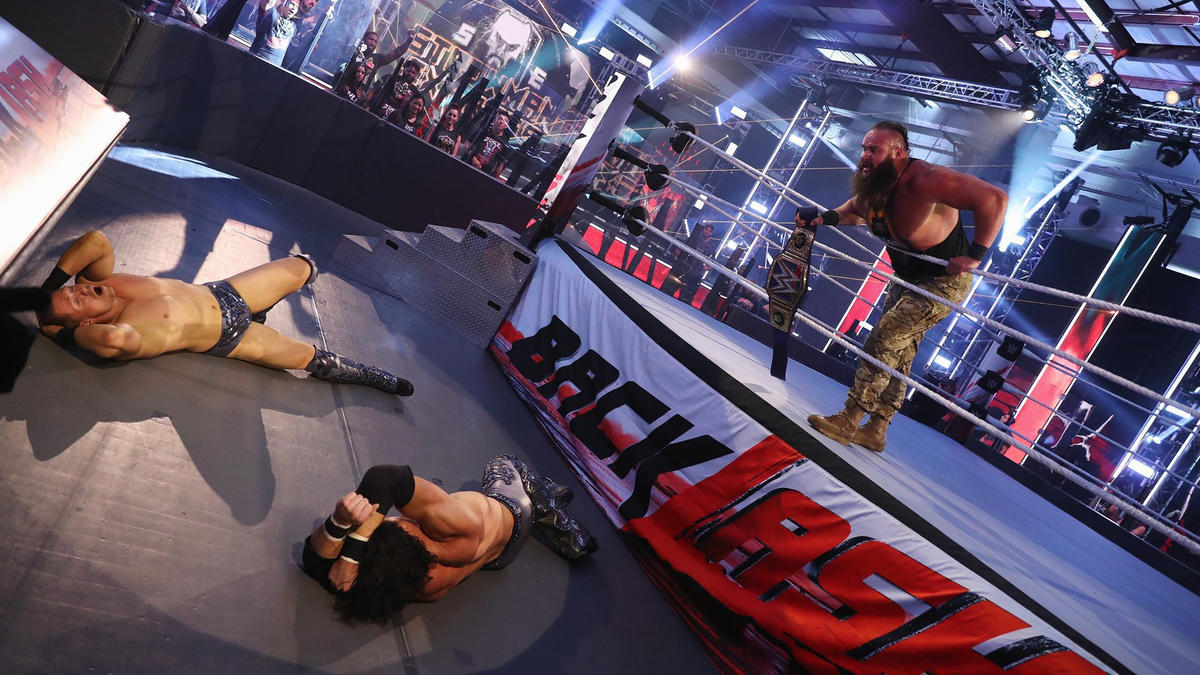 This was really about what I was expecting. It’s weird how far Strowman’s fallen, even as Universal Champ. That’s not to say Miz and Morrison aren’t entertaining -their new song is kind of a bop- but handily defeating a comedy tag team is a far cry from Lesnar’s run with the belt. After Miz and Morrison double teamed Braun to get him off his feet, Morrison went for the win. Having found out earlier in the night that whoever got the pin would be the sole Universal Champion, Miz dragged his friend out of the cover. Realizing what he did, Miz encouraged Morrison to go for the pin again, but Strowman kicked out. He delivered a Running Powerslam to retain and probably break up the greatest friendship of the 21st century. At least creative knows that a Strowman match shouldn’t surpass 10 minutes.

This match was good, actually? Par for the course it ran a bit long, but overall this potentially ended up my match of the night. Lashley attacked McIntyre right out of the gate following a distraction from MVP, putting him in the full Nelson before the bell even rung. The ref had to force Lashley to break it, and Bob looked more intimidating in those 90 seconds than in his entire feud with Rusev. The rest was surprisingly evenly matched, considering how little gravity Lashley had going into the match. Partnering with MVP has helped him seem a colder, smarter heel, and the big boy strong spots here really pulled him off as a serious contender for McIntyre. The WWE champ delivered as well, bumping for Lashley like he was breaking every bone in his back. After Lashley countered a Claymore into a spear, McIntyre managed to kick out. MVP and Lashley were both stunned, but Lana made her way to ringside for reasons unclear. She yelled at Bobby from the apron, distracting him for McIntyre to hit a head butt, which knocked Lashley into his former manager. McIntyre hit the Claymore to retain, and blew the camera a big Scottish kiss.

This match didn’t happen, as instead we got a part-dream sequence full-on nightmare where the Profits and the Vikings chased each other around the PC, throwing bowling balls into crotches and running through doors. They ultimately were forced to team up when Akira Tozawa and a team of masked ninjas showed up on motorbikes in the parking lot. The Viking Profits summoned the power of magical turkey legs and red solo cups to defeat the ninjas, until Tozawa revealed the final one was 7 feet tall. The new team escaped on the roof of a truck, before their fighting got the best of them and they threw each other into the dumpster below, where they were chased out by a sea monster. I made up none of that.

In my opinion, this suffered the most from its awkward placement in the show. It followed a surprisingly good championship match with Lashley and McIntyre, and led into the Greatest Wrestling Match Ever, rather than providing a breather between some earlier matches. I guess there’s comedy in the increasing insane stuff that kept happening, but truthfully it missed its mark for me. “Cinematic” matches for the sake of cinematic matches feel self indulgent in the worst way.

The first 15 minutes of this were great. I’ll even give them the first 20. But this whole match ran over 45 minutes, and for what? To see both men kick out of every finisher? 30 minutes in and I was chugging the rest of my White Claw and praying for the end. Here’s the thing: most wrestling matches shouldn’t run more than 10 minutes. This one could have gone a tight 9 and been far more impactful in my book, plus I could have caught the end of John Wick 2 on USA.

There was certainly some good stuff here; Orton and Edge know each other so well that they always work together fantastically. The actual finish of the match played out really well, with Orton powering through the spears to land a potential low blow and a punt to Edge’s head. It was the 20 minutes leading up to the finish that had me yawning. Both Orton and Edge escaped finisher after finisher- Edge-cution, RKO, Pedigree, Unprettier- kicking out often at one. It’s groan inducing in an NXT main event, and it’s so weirdly out of place in a match featuring Randall Keith and Edge. Randy celebrated his victory by whispering lovingly in Edge’s ear that he should go home and spend time with his family. Solid advice that came about half an hour too late.