Halloween Havoc is the hair raising, wheel spinning, Ciampa main eventing party of the last week of October. The hater in me wants desperately to write a think piece about why even in their new era, NXT is so high on Ciampa when the last interesting match he had was 3 years ago. But I’m trying to turn the page on professionally hating, and I’m also very confident several other people will cover that exact topic. Instead, I’ll give NXT flowers for an overall enjoyable show, hosted by a murderous doll come to life and also Chucky. Throughout the night we saw several title changes, including the still relatively new Toxic Attraction seizing both the women’s tag belts and the NXT women’s championship. I wasn’t entirely sold on the group when they first debuted a few months ago; partially because that name sounds like a dollar store candy that’s been on the bottom shelf since 2006, and partially because WWE’s track record with female stables is borderline at best.

Rose was always a solid player on the main roster who never quite got the opportunity to shine. The same could be said of her former tag partner, Sonya Deville, who’s somehow found a nice niche as Adam Pearce’s better dressed business partner. Arguably, Rose should have found main roster success; she’s hot as hell, a solid promo, and while she was generally only allowed to do three moves in a match, she did them very well. It’s a mystery why she never got the spotlight, but it seems like a return to NXT and a quick salon visit fixed all of that. Toxic Attraction (the stable, not your brother’s high school band) debuted officially in August, with Rose taking Gigi Dolin and Jacy Jayne under her wing. I knew Dolin primarily from her days in Evolve, but I wasn’t very familiar with Jayne. Nonetheless, the general Hot Topic goth aesthetic worked for the group. Jayne and Dolin worked together well as a team, and finally Mandy had her moment as a singles star. It was the best you could hope for when NXT attempted to write for three women at once.

While Mandy made new emo friends, Raquel Gonzalez was treading some pretty shallow water. Gonzalez is a force in the ring -she moves like a badass and she well knows it- but her title reign never seemed to kick off like it could have. I’d argue her former friend Dakota Kai probably should have taken the belt off her back at TakeOver 36, yet somehow Big Mami Cool found a way to extend her run. Big wrestlers smashing tiny little wrestlers is always going to be fun, but after a while, it kind of felt like that was all Gonzalez was bringing. Even when she sort of became a face and started being nice to people, all she really gave was the back flexing. Not that it was all her fault; she was given the unfortunate task of becoming champ just as NXT was realizing they needed to change, and it seemed she just got lost in the shuffle. Even with all her impressive strength and ability to make anyone look like a shrimp, NXT was returning to character driven stories -your favorite Italian gangster, “woke” Joe Gacy, five friends who mine for diamonds together-  and Gonzalez didn’t quite seem at home at the top of the division. One could, of course, say the exact same of the men’s NXT champ, but I promised that one wouldn’t be me. But it will definitely be someone else. 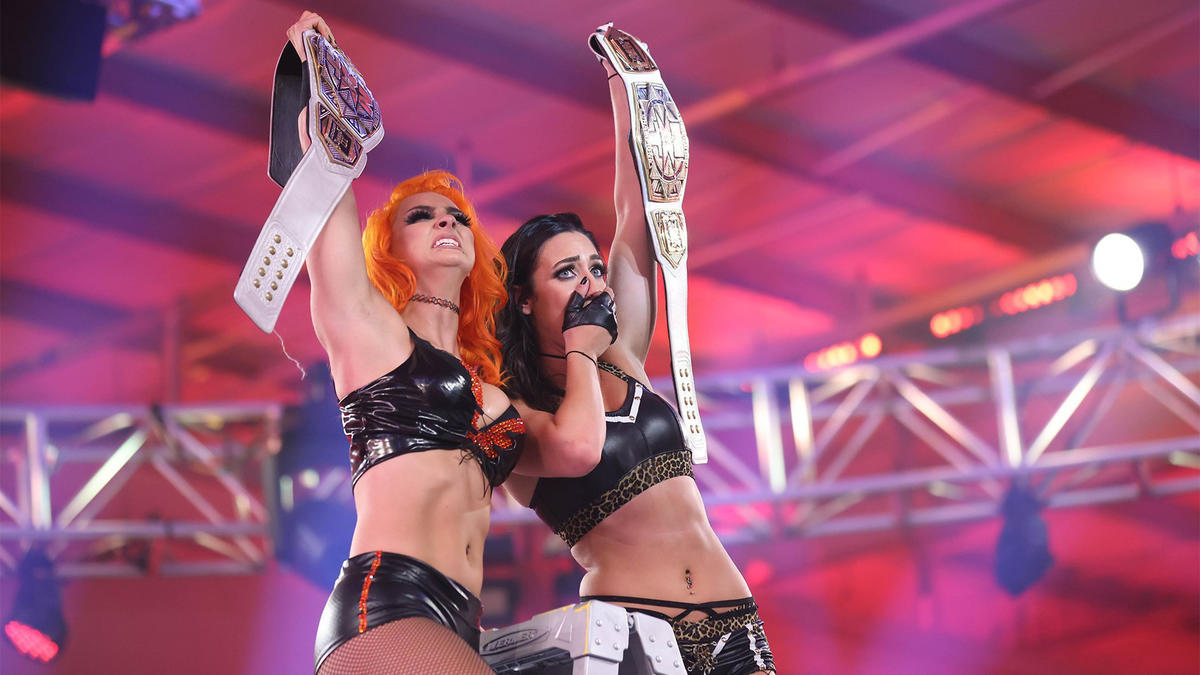 Halloween Havoc delivered the first Toxic Attraction win in the Scareway to Hell ladder match. This was fine enough with your usual ladder spots that make every bone in your body hurt just to watch. Some teamwork from Toxic Attraction distracted newlywed Indi Hartwell long enough for Dolin to grab the titles atop the ladder, and your favorite 90s girl group was off to a rocking start. Rose and Gonzalez later faced off in a Spin the Wheel Make a Deal match, where the spooky wheel and Chucky decided this was going to be a Trick or Street Fight. Both women relied heavily on the weapons here, including a fire hydrant spot in a Jason mask for… A reason. In the end it was interference from a cloaked Dakota Kai who nailed Gonzalez with a kendo stick and allowed Mandy to win with the pump knee strike, a move I imagine Kenny Omega stole once he saw how good she was at it.

This was a very different side of Rose from the all-American bombshell we got on the main roster, but it was one that fit perfectly alongside the nasty streaks of Dolin and Jayne. She hasn’t gotten the chance to be brutal like this, nor has she looked quite as rough. Raquel has been a badass from the get go, but Mandy rose to meet her here. It was interesting to see Rose make the personality switch on NXT, unlike previous main roster crossovers Finn Balor and Samoa Joe, who went back to reclaim their glory days and revel in what they used to have. Rose never spent much time on the black and gold brand, so there wasn’t any nostalgia in her return. Instead, she needed the reinvention, and NXT needed the fresh stable as they surged forward in these uncertain neon times. 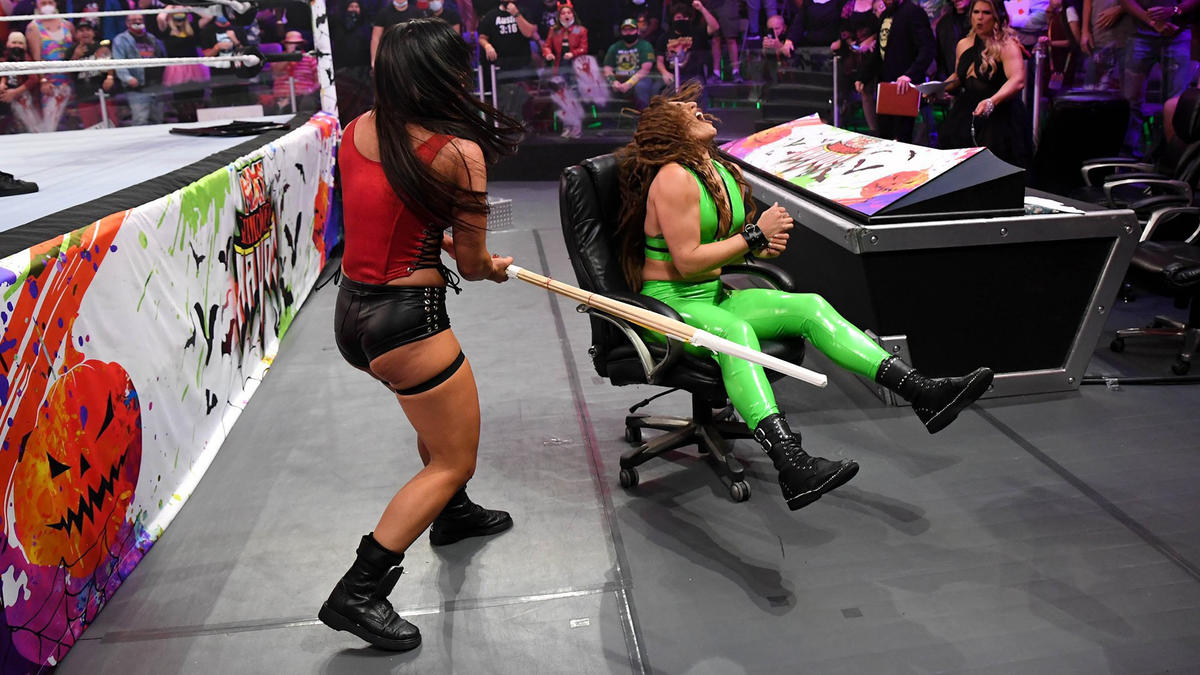 Alongside her nuclear teammates, Rose has a lot of potential to help lead the women’s division. She’s shown she’s capable of stepping outside the box, and the Spencer’s Gifts scene appeal of Toxic Attraction works with the NXT 2.0. Furthermore, I can’t remember the last time one sole group held two women’s titles at once. We’ve of course had Becky Two Belts and Bayley Dos Straps, but one set unit holding all the last gold on a brand? It’s an impressive look. Maybe they can even put some black and pink duct tape on the titles.

While I wouldn’t have put money on being excited for Rose as champ a few months ago, she fits right in alongside this new era of NXT. Toxic Attraction has given her more personality than SmackDown ever tried to bring. Turns out it’s true what they say: if you can’t be America’s blonde sweetheart, you turn into an angry brunette with a fallen angel motif and two sneaky goth friends.

Mario Party Superstars Stickers Guide - How to Get New Stickers

I Think You Should Make Hot Wassail