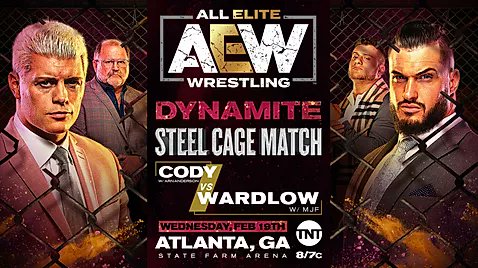 After last week’s historic Dynamite, AEW is promoting zero women’s matches! That disappointment aside (and precluding a visit from the god Britt Baker), the show is almost unreasonably stacked. Depressed gamer Kenny Omega and depressed drinker Adam Page defend their AEW Tag Team Championships against the Lucha Brothers. The rest of AEW’s tag teams will be in a battle royal to determine the winner of that match’s challengers at Revolution. Jon Moxley takes on a debuting Jeff Cobb in a match where Mox’s ultimate success against a member of the Inner Circle isn’t quite so certain. And, finally, AEW gives us their first steel cage match, the fulfillment of MFJ’s third stipulation for Cody Rhodes, as he takes on Wardlow. It’s a little less emotional and a whole lot less perverted than ten lashes, but it should be a good time!—Colette Arrand

(Streams live at 9PM EST on the AAA Twitch Channel.)

Time for another AAA Twitch show baby!! Do you know what that means? More mask stealing, cheating, and overall bastard behavior from my favorite guys LA Park, Rush El Toro Blanco, and Bestia Del Ring. Will the newly reformed Psycho Circus be able to defeat them? This card is looking like it will slap. I mean, look at that tag match in the semi-main. Lucha Bros vs Daga & Taurus vs Puma King & Laredo Kid? Please! Thank you! To me, AAA in 2020 is the platonic ideal wrestling company. The style is exciting, everyone looks cool as hell, the roster has star power, and the shows are fun and well-structured.— LB Hunktears

(Available on VOD on Stardom World.)

No matches for this show have been announced other than Mayu Iwatani defending the World of Stardom Championship against Jungle Kyona, but if the tag match that pitted them against each other last month was any indication, this will be worth watching. It’s still really tough for me to wrap my mind around a Stardom with no Io Shirai, no Kairi Hojo, and now no Kagetsu, but at least we can still count on Mayu Iwatani delivering solid main events. Hoping the rest of the card is good too!— LB Hunktears