This Town Ain’t Big Enough for the Both of Us: Reigns vs Lesnar Part 15

Another banner week for WWE, and by that I mean boy, did they appear in a lot of news headlines. Aside from the most explosive story of the week (if you live under a rock, Colette already examined this for us), there have been multiple rumors of Sasha Banks being released, although nothing concrete has yet to come of that. If anything, The Boss remains in limbo, and just when you think she’s free of this place, there’s someone with a screenshot of the current active SmackDown roster to bring you back down to earth.

All in all, it wasn’t a great week for anyone who works for this company, but an excellent week for those of us who make jokes about it. Vince McMahon came out on Friday night to cut his usual “gee I love this city and these people” promo on Minnesota, which was as terrible as it was short (very).

The concept of putting yourself on live tv to get cheers less than a full day after your daughter announced she’s the new interim CEO of your because of the ongoing investigation into your sexual and financial misdeeds, is pretty bonkers on its own. But add in the fact that all Vince did was repeat the same slogan the show literally just opened with (Then, Now, Forever, Together, in case you somehow missed it) and the whole thing felt like the most obvious, ham fisted publicity stunt this company has done in some time. And, may I remind you, they had Logan Paul wrestle at WrestleMania.

If you weren’t already annoyed with the blue brand, they made sure you got there in the main event; Riddle vs. Roman Reigns for the Universal Title. Some people have ragged on Roman for appearing less on the two shows now that he’s double champ, but I’m all for it. The Tribal Chief works smarter, not harder.

I just wish he didn’t have to work with Riddle.

Alongside every other reason to dislike this guy, his team with Orton has long worn out it’s welcome in my book, and while their tag title unification match against the Bloodline was good, the following developments felt like they just drew names out of a hat when determining Reigns’ next opponent. Which, having watched SmackDown and Raw regularly, kind of feels like the way things are being run right now.

Still, Reigns and Riddle were a good match, arguably the best of WWE’s whole week, and we have Roman to thank for that. I get that the shine has worn off for some, but I’m ready to acknowledge this man for the foreseeable future. He’s done some of the company’s best work over the past two years, and while he may be afraid to show his face on USA Network, he’s never shied away from showing out in the ring.

The crowd was very hot for this one, proving that I’m alone in finding RK-Bro one of the greatest sins of the past decade. They even loved hearing the Viper’s theme earlier in the night, as Riddle attempted to get himself in the Orton mindset by finding a singular voice in his head. If he’d walked into the main event with a goatee, I actually would have popped for that.

Riddle got a good amount of offense in here, coming out of the gate with some quick punches and backing Roman into the corner. As the match wore on, commentary reminded up that Riddle has shown up on Raw every week, while Reigns just returned from a private island, but flying these days is even more hardcore than anything Raw produces, so I’d wager that leaves them on the same level.

Reigns delivered some excellent near falls, both on offense and defense, kicking out at the absolute last second. He even found time to talk some trash about Orton to the camera after dropping Riddle on the table in a side slam. When Orton vs Reigns happens down the line, that’ll been a proper barn burner as well, and it could even spell the end of Roman’s time as champ, but we’ll cross that bridge when we get to it. 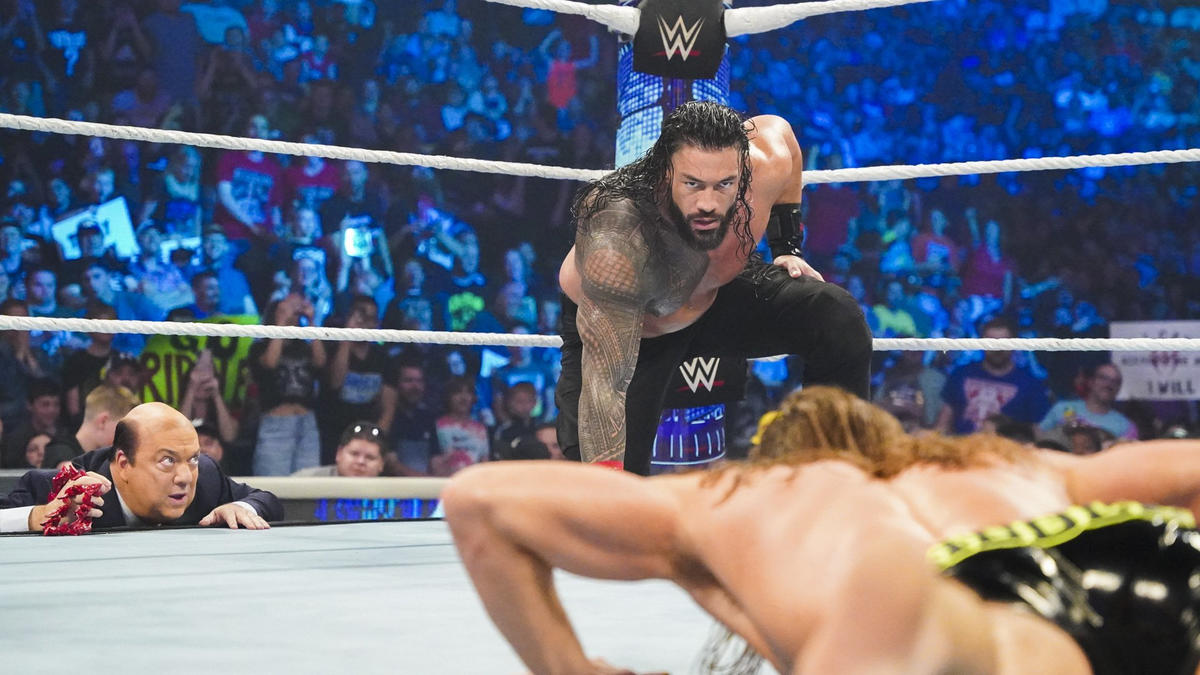 Riddle countered the spear with an RKO (that’s a little known tribute to his tag team partner,) and while McAfee and Cole tried to sell this like the biggest moment Minneapolis has already seen, Reigns was out at 2.9. He connected with another spear, much to a very relieved expression from Paul Heyman, but things weren’t over yet! As the Bloodline posed in the ring, Roman cut a promo about how there was no one remaining to challenge him (a point yours truly covered last year. Keep up, Big Dog).

Surprise, surprise, there was exactly one cowboy left to answer the call. Brock Lesnar marched down to the ring, ponytail and all, to stare soulfully into Roman’s eyes. He tipped his hat and offered a handshake, before delivering an F5 to the Tribal Chief. He followed up with two to the Usos, standing tall to close out the night, and the Bloodline scampered away back to their private island.

Lesnar vs. Reigns is something of an ol’ faithful for WWE. Much like your favorite Disney classic or a breakup fight at Starbucks, we’ve all seen it so many times, and yet, it’s still fun to sit and watch it unfold. Even thinking back when it was fashionable to hate both men, I struggle to name a match of theirs that I truthfully disliked. You can take a lot away from Vince McMahon, but he’s said at least one honest thing: A lot of beef in this ring. You can’t go wrong with two dudes throwing each other into things, and these guys love to do that. We’re rolling closer to SummerSlam, and our marquee matchup may just be another Mania repeat.

While, in some fantasy dream world, I’d like to see the company try to build up someone else into a worthy enough champion, even if they started now, it seems unlikely that project would be anywhere near the level of Reigns or Lesnar until 2024. I know I just ragged on Raw for keeping Becky in title rotation, but Belair and Asuka is a feud that doesn’t need further star power. On the opposite side, there’s arguably no one else, on SmackDown, Raw, or anywhere in WWE’s current roster, who could conceivably step to Reigns right now. Is it tiring to return to the Lesnar/Reigns well? Yes, it is. Am I still going to be excited to see these two beat the shit out of each other? Of course.

Vince McMahon Navigated Controversy for Decades. What Changed in 2022?