Welcome to Let’s Pretend It’s Any Year Other Than 2020, where the Fanfyte crew talks about wrestling from May in other, better years.

Wrestling is somehow still continuing during this current time period, but let’s not dwell on that, because every second I spend remembering it’s 2020 makes me want to throw up a little. Time to venture back to the most successful professional wrestling promotion in the year 2000; World Championship Wrestling. Slamboree 2000 was a wild show with some impressive architecture and some very questionable booking, but let’s see how they turn things around with Nitro and Thunder this week. 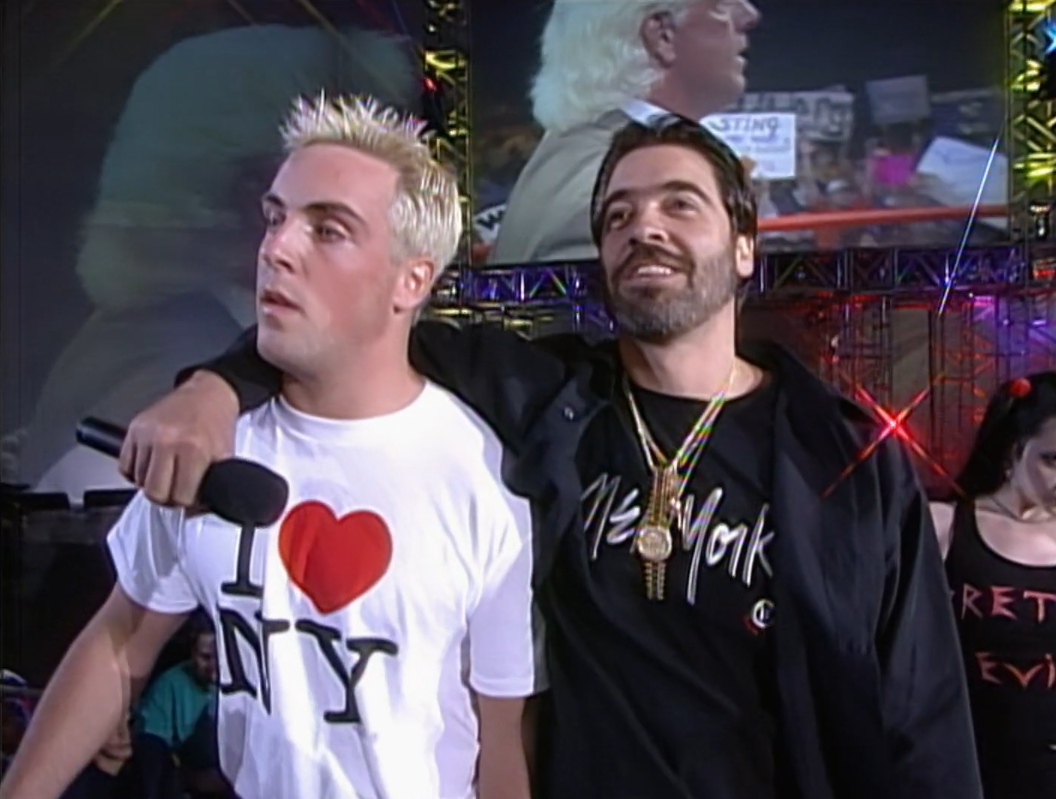 You know how you get so fed up with your dad, you join forces with his professional enemy, dress up as someone else he works with, and beat the shit out of him with a baseball bad? David Flair sure does. Ric comes out Monday night to address the attempted patricide and the more serious crime of teaming with Vince Russo. Ric reminds David how he’d tried to warn him about sleezeballs in the wrestling business like he was running an anonymous account on Twitter, but David doesn’t care. David even calls him Ric, which is how you know he means business. Russo wants to book Flair vs Flair at Great American Bash, but Ric offers to call up Vince McMahon to put David on Raw, as long as he stops hanging out with Russo. For a minute it looks like David’s cool with his dad again, before he hits him with another miniature Statue of Liberty. Why does Russo have so many of those? Just to remind people he’s from New York? 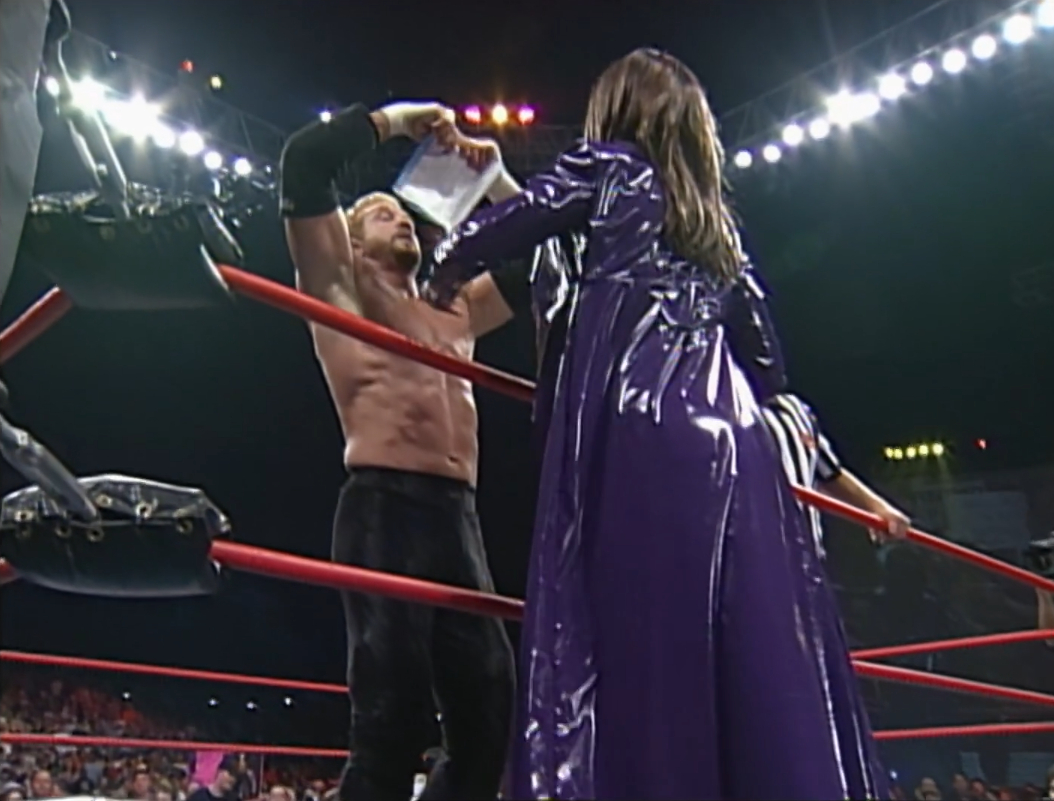 Early in the night we see Page sitting at Kanyon’s bedside as his friend recovers from attempted murder. The New Blood interrupt this touching display of male emotion and beat the crap out of Page, ending with Kimberly dumping a bedpan full of pee on him. It’s the little details that really put WCW ahead of the curve.

Bishoff and Kimberly are both on commentary for this stretcher match between Awesome and Page, which starts with DDP attacking Awesome on the ramp. Page gets control until Kimberly brings out the divorce papers and demands he sign them. No time like the present. Page is as easily distracted as any other wrestler, and ends up taking a chair shot from Awesome. He gets a DDT onto the chair and a power bomb through the table, as Bischoff gives him a helping hand in signing the divorce papers. Awesome gets Page on the stretcher and wins. I see where DDP got that sense of inner peace he brings to his yoga, because there’s no other way he could have mentally survived this booking. 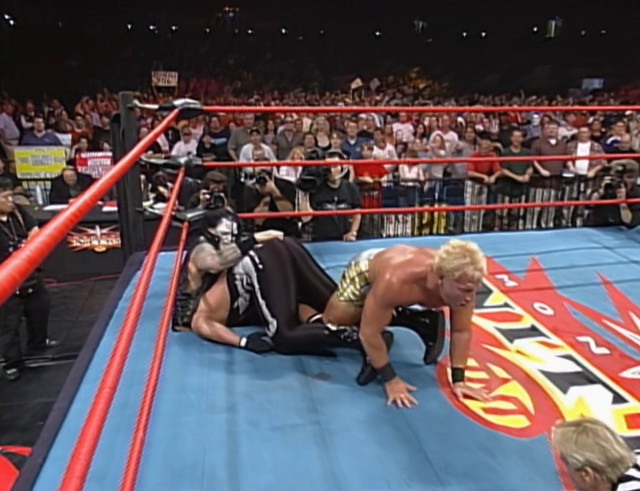 Our new world champ Jeff Jarrett takes on the Stinger, defending his brand new title in the main event. Sting is in control in the very beginning, but Jarrett grabs a chair and beats some of that face paint off on the ramp. Once back in the ring, Jarrett gets Sting in the Figure Four, but your favorite insect reverses. Sting hits a splash and gets the Scorpion Death Lock, but before Jarrett can tap, Vampiro pops out of a hole in the ring and drags Sting to the fiery underworld. Smoke fills the ring, and by the time it clears, all we can see is ref Charles Robinson looking mildly confused.The crowd is on board with none of this, chanting “bullshit” as commentary does their best to sell yet another interference. Vampiro pulls Sting back up through the hole, this time covered in a red liquid. You could say just about anything else in 2000, but “blood” was a hard no. Vampiro drops Jarrett into the cover, and double J retains. The actual wrestling portion of this was good, but Vampiro living under the ring did absolutely nothing. 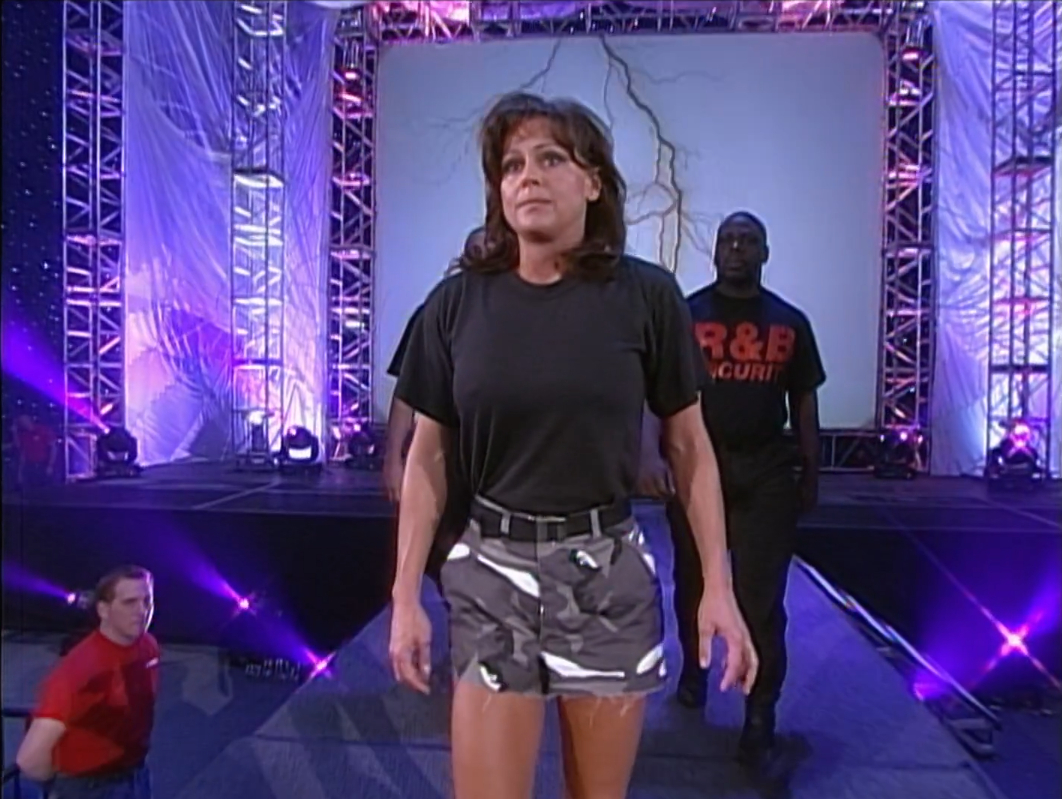 We get our second minute long women’s match of the week on Thunder. The stipulation here is if Elizabeth wins against Rhonda Sing, she gets to go back with Luger. Typical hostage negotiation here. Sing is easily controlling Elizabeth when Luger comes out to save the day and puts her in the rack. She taps, although not to Elizabeth, so I’m really not sure how this ends the match. We shouldn’t think too hard about anything happening here, especially not Russo’s mind numbing fat jokes. Why did we give this man a mic for so long? Chuck Palumbo runs out and attacks Luger to steal Elizabeth back. I’m all for true love and everything, but this kidnapping angle is a bit much. 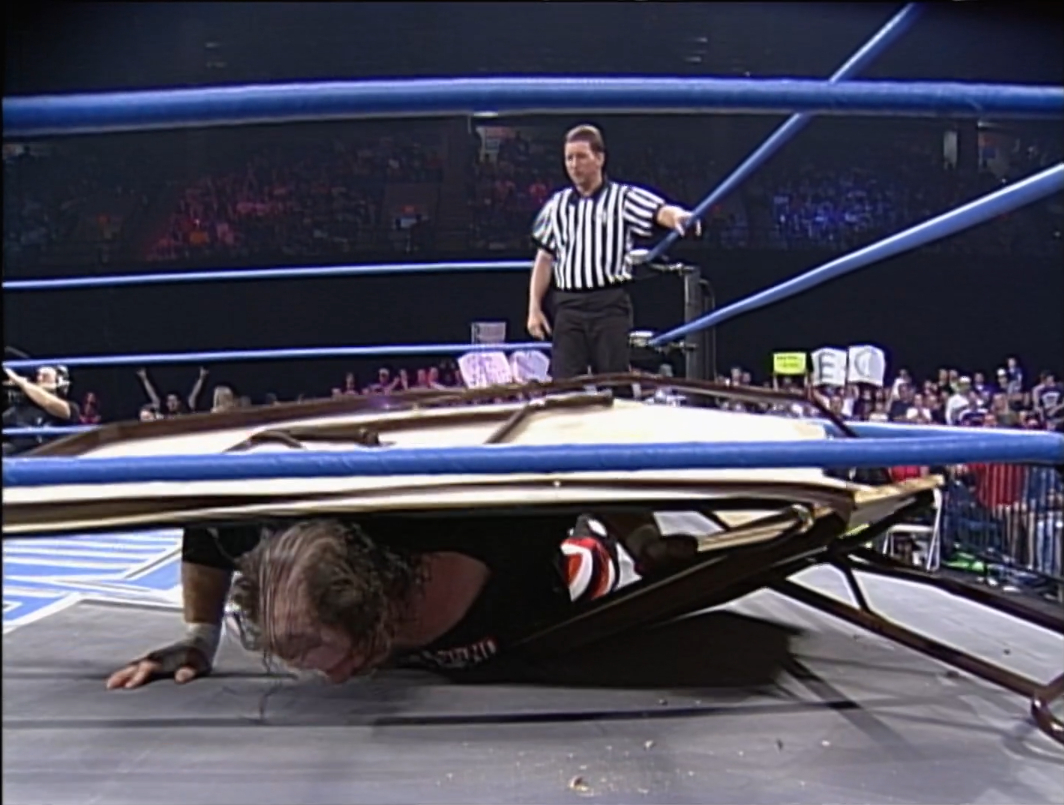 Bischoff wants the hardcore title, since Terry Funk is too old to care about the gangs on WCW right now. After defeating Harlem Heat earlier in the night, Funk is forced to double dip and take on “The Main Event” Chuck Palumbo, whose current gimmick is that he’s Lex Luger. I think he’s going for a William Wilson type situation, using Luger’s entrance and gear. Terry Funk is, as always, playing Terry Funk.

Palumbo starts out with a chair on the entrance and throws Funk into a table. Things look bad, but Funk is 56 years old and made of rubber, so he manages to rally back and fights Polumbo into the crowd and backstage. There’s a lot of ruined trash cans and cleaning supplies, and the two end up outside. Chuck is about to toss Funk off the edge of the parking garage before Lex Luger shows up to claim gimmick infringement. Luger beats Palumbo into a dumpster and gets Funk the win. Luger then attacks Palumbo again, demanding to know where Elizabeth is. R + B Security show up and mace the Total Package; a sober commentary on employee/company relations. 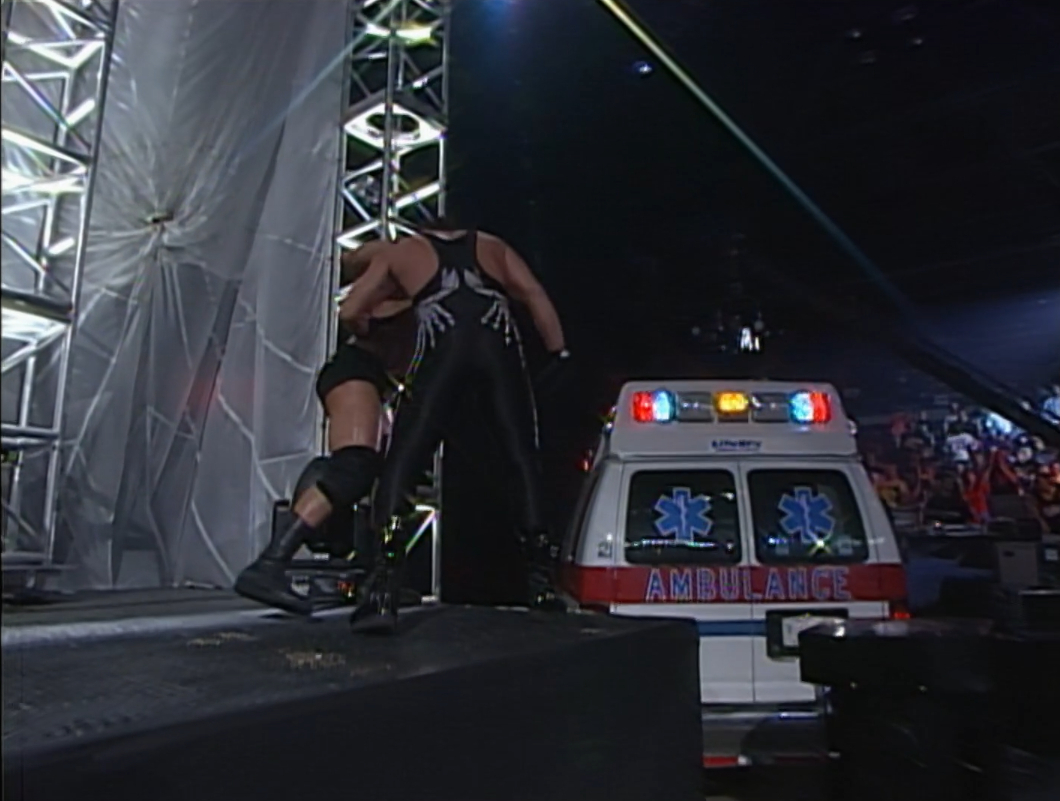 Do Vampires Dream of Ambulance Matches?

Mike Awesome wants the stretcher, the ambulance, the whole damn hospital. If we needed further proof that Sting carried this company, he’s in both main events this week. Awesome starts out hot, attacking Sting as soon as he enters the ring and dropping him in the not-blood on the mat. The two fight up the ramp and straight to the LifeStar ride. Sting hits a Scorpion Death Drop on top of the ambulance, but as he’s opening the doors, Vampiro pops out and spits some red dye #2 in his face. Sting is dragged into the ambulance and Awesome wins. Vampiro drives off with Awesome riding rooftop, and that’s the show.

The basic philosophy for the booking of these matches seems to be to throw as much stuff at the wall as possible and hope that at least one thing will stick. Less is not more in the Russo/Bischoff playbook; only more is more. It’s like icing a cake that’s already covered in frosting, and then sitting back and watching children throw up. But hey, they’ve got plenty of years ahead of them to get back on track, right?

Tags
let's pretend it's any year other than 2020wcwwrestlingwrestling recap