I gotta address this right away; there was no giant pumpkin. There was a medium sized blow up pumpkin that Johnny Gargano deflated during his entrance, and pumpkin graphics were all over the tron, but I had some very specific expectations here that were not met. WCW really set the bar with giant pumpkins, and this was a massive failure in that respect. I expect way better if they do this again next year.

Still, the first Halloween Havoc in two decades managed to be a fun night for the black and gold brand. We opened with Shotzi Blackheart escaping from an old timey asylum chair with a killer jumpsuit and a chainsaw, and things were somehow still uphill from there. 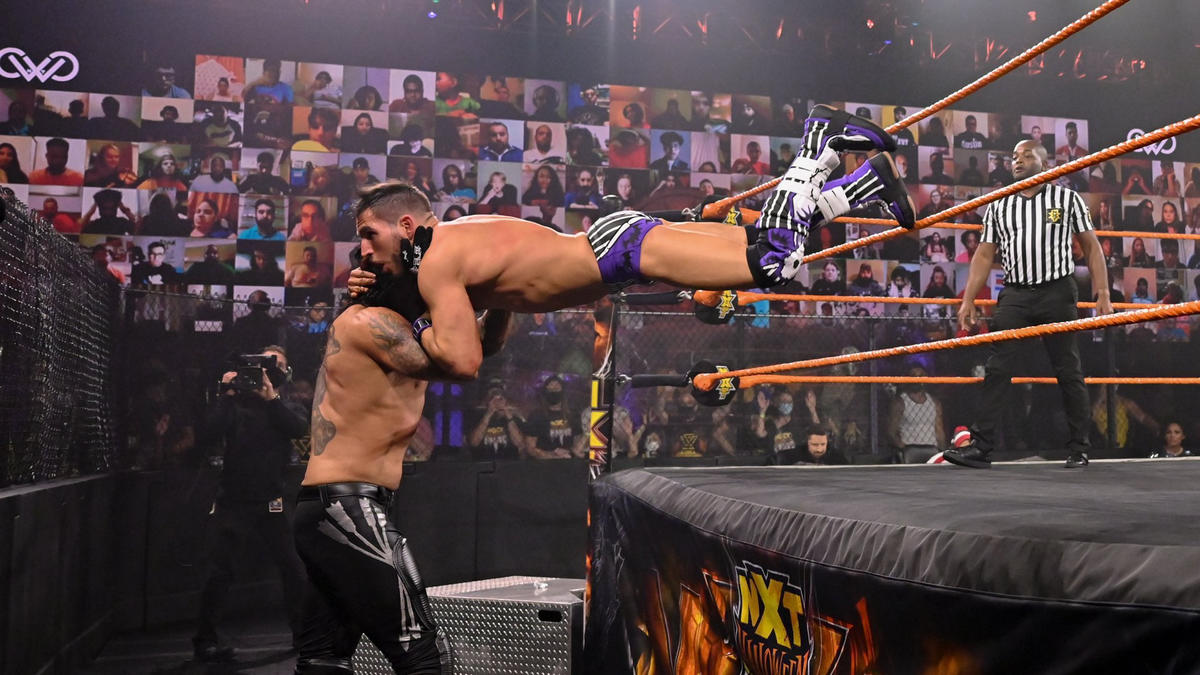 This started, as all great things do, with a wheel spin. Shotzi got “Devil’s Playground Match,” which is definitely the name of an upcoming CBS drama. This meant no count out, no disqualification, and falls count anywhere. Priest started out on top, throwing Johnny to the outside and into the fake gravestones. Gargano came back with a drop kick into the stairs, and pulled a kendo stick out from under the ring. Priest matched him with his own baton, and the two took turns swinging like they were failing middle school baseball tryouts. Priest landed a Broken Arrow across the commentary table, wiping Gargano out. Still, Johnny got to his feet and mustered the eneybto super kick a Beetlejuice decoration. The two made their way backstage and wasted a lot of fun size candy. They then travelled in front of the wheel and hit each other with a trash can, the spookiest of all Halloween decorations. Priest went for The Reckoning, but a mysterious man in a Ghostfsce costume interfered with a piped. It’s not 2002, so I have to imagine there’s a limited number of people who purchased that costume, and they could solve that mystery pretty easily. Not-Matthew Lilliard handed Johnny a gravestone, which he promptly cracked over Priest’s head. Gargano crawled into the cover and got the win, which made him a 2-time NA champion. This was pretty solid, with an admittedly surprising result in Gargano’s victory. 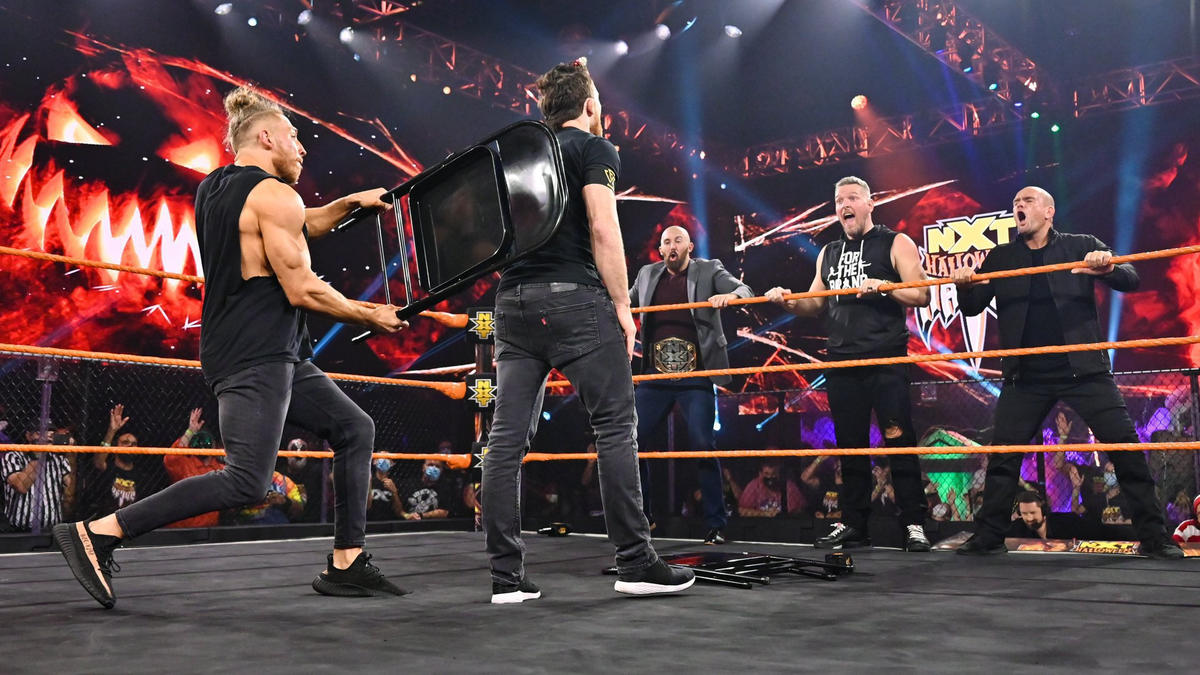 Following the first match, Pat McAfee and the new tag champions Oney Lorcan and Danny Burch came out to the ring. McAfee cut a promo blasting Undisputed Era and saying he hired Ridge Holland to take care of them- but when Holland was injured, he pivoted to Lorcan and Burch. Kyle O’Reilly was the lone member of UE able to confront McAfee. As Kyle paused outside the ring, the Bruiserweight’s music hit, and Pete Dunne returned to back up O’Reilly…. and then promptly turned on him at the same time. Really bad night for Kool Kyle, as the foursome took turns beating him up. Dunne working with McAfee’s club is an interesting twist- it evens the numbers to feud with UE, especially since Dunne has had beef with the Era in the past. Seeing UE as the de facto faces here will be fun as well- they don’t often get to play that role. 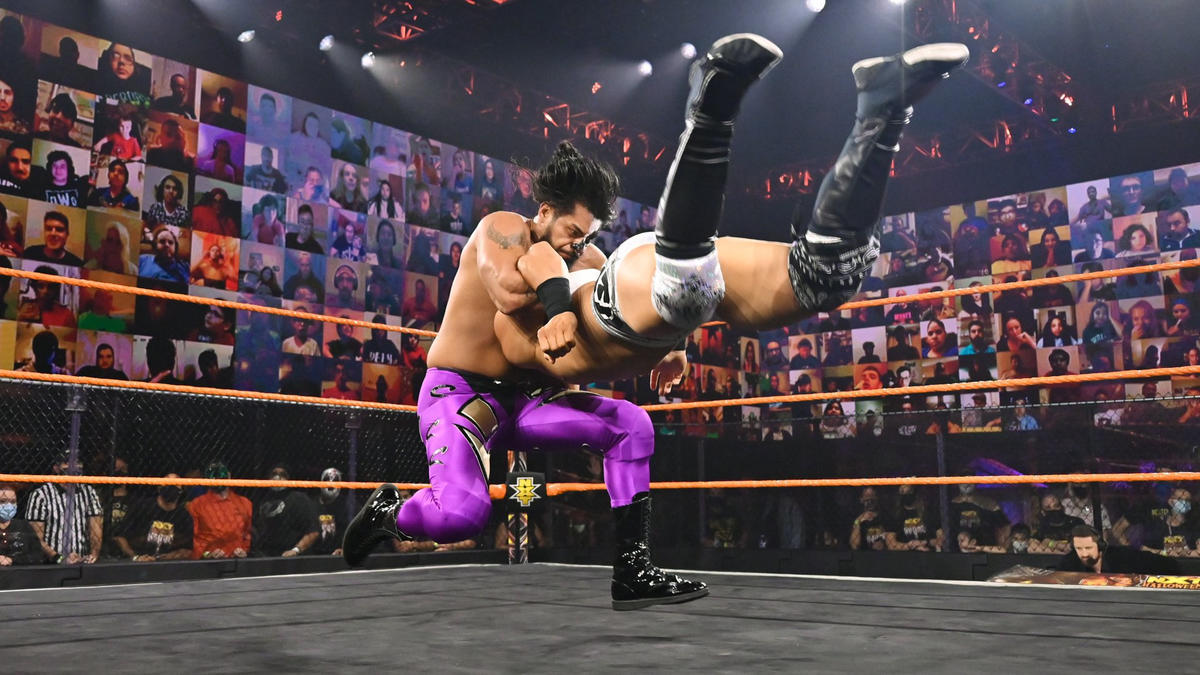 Santos Escobar was rocking the Rey 1997 Halloween Havoc gear, and he was really pulling it off in my book. The champ controlled from the bell, knocking Atlas around the ring. Atlas fired back with some hard right hands and a huge back body drop to the champ. He went for the pin but Escobar kicked out; a cartwheel DDT almost got the win, but Wilde and Mendoza prop Escobar’s foot on the ropes to break it. Atlas tried to fight off Legado, but Mendoza donned a gimmicked luchador mask and hit him with a headbutt. Escobar then landed a driver to retain in what was an unfortunately very quick match. The challenger was, predictably, outmatched, but I would have liked to see a bit more from both men before the finish. Atlas is certainly capable of hanging with the champ, but I guess we needed time for the establishing shots of the haunted house of terror. 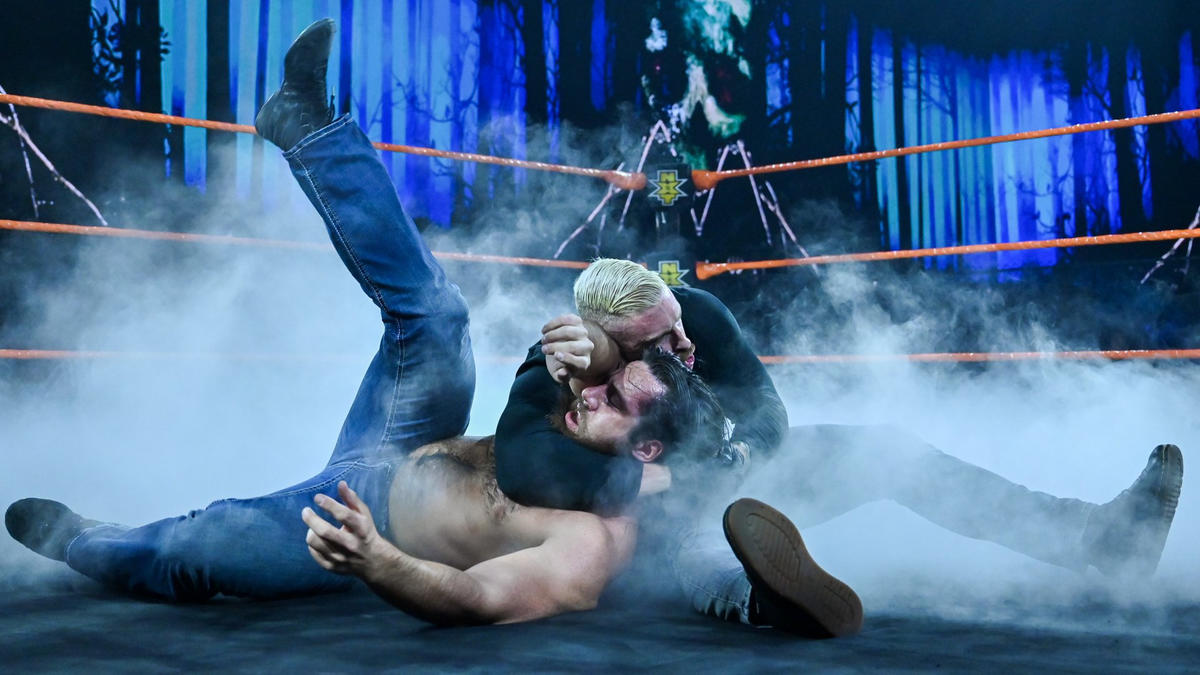 Cameron tried to talk himself out of the match earlier in the night, but Regal wasn’t having it. He was dropped off alone outside a modest looking split level in the Florida wilderness, the start to many a first year film student’s thriller screenplay. He strolled right past Lumis perched in a tree, which was honestly one of the funniest gags in the whole bit. Grimes entered the house and was quickly spooked by a sentient tricycle. After coming upon a possessed referee, a contortionist showering in the bathroom, and a series of blurry figures, Grimes managed to fight off Lumis and his minions to escape outside. He tried to seek refuge in the van that had dropped him off, only to find that Lumis was now the driver. He ran off screaming into the woods, and the rest was to be continued.

We caught back up with Grimes later on as he made it back to the ring, implying that he had run from Lumis’ house (approximately a 20 min drive as we learned earlier) to the PC, in jeans. A true Halloween hero. He collapsed on the spooky set, where he was again chased by those zombie gymnasts. Once he’d backed into the ring, Lumis appeared and wiped him out. He threw a zombie at Grimes and then choked him out, making him the official winner and new owner of the haunted house.

This was… fun? It wasn’t the best, but it wasn’t terrible. I gotta hand it to Grimes, who played his part here perfectly. His delivery of throwaway lines sent me a few times- particularly when he wandered into a room and asked the ref, who was standing alone facing the corner Blair Witch style, if the match was pinfall or submission. In fact, Lumis didn’t actually do much of anything here, but that seemed to work for him. Letting Grimes lead the segment and play off the zombie extras was a good call. Lumis is creepier as a character if he doesn’t play along with too much of the “”spooky”” business. 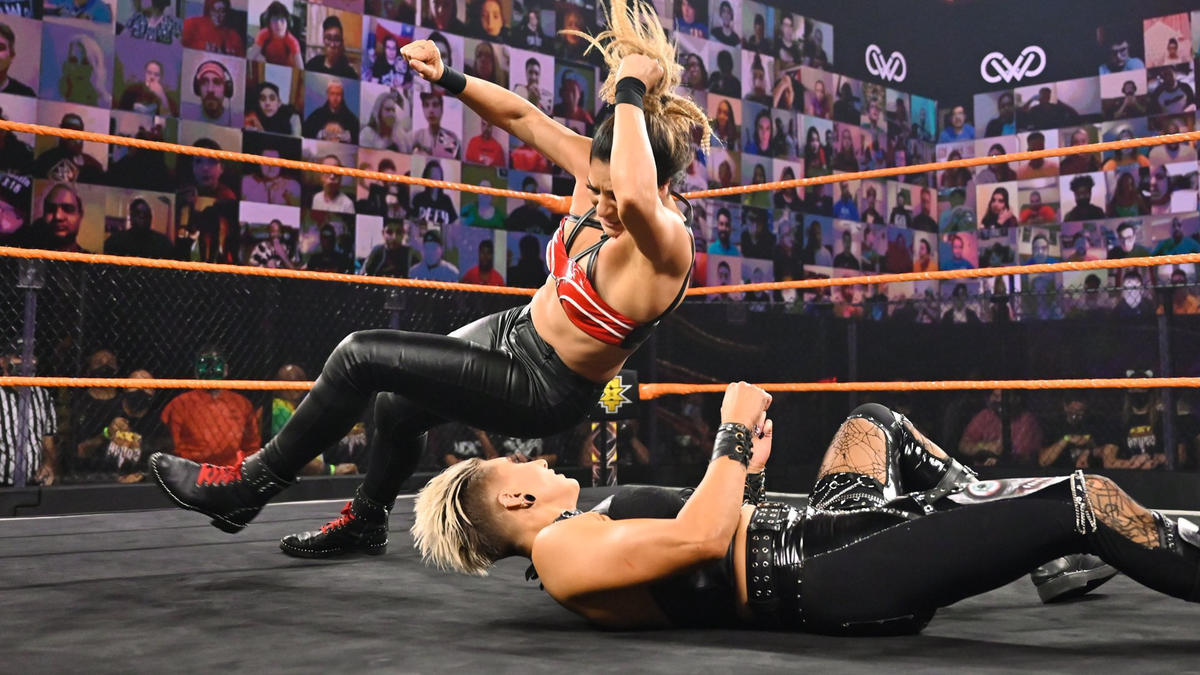 Both women were evenly matched here, each trying to show off their power. They traded shots in the center of the ring, each able to counter any moves the other attempted. Gonzalez finally got the upper hand by tossing Ripley into the chain fence barrier. Back in the ring, she delivered a powerbomb and attempted a pin, but Rhea kicked out. Another few pinning attempts couldn’t keep either one down, even after Golzalez somersaulted off the top turnbuckle and drove Ripley into the ring. Rhea threw her into the corner then followed up with a kick, stunning Golzalez long enough to land the Riptide and get the win. This was a solid big woman match- it’s not always my thing, but it’s fun when it doesn’t overstay its welcome. 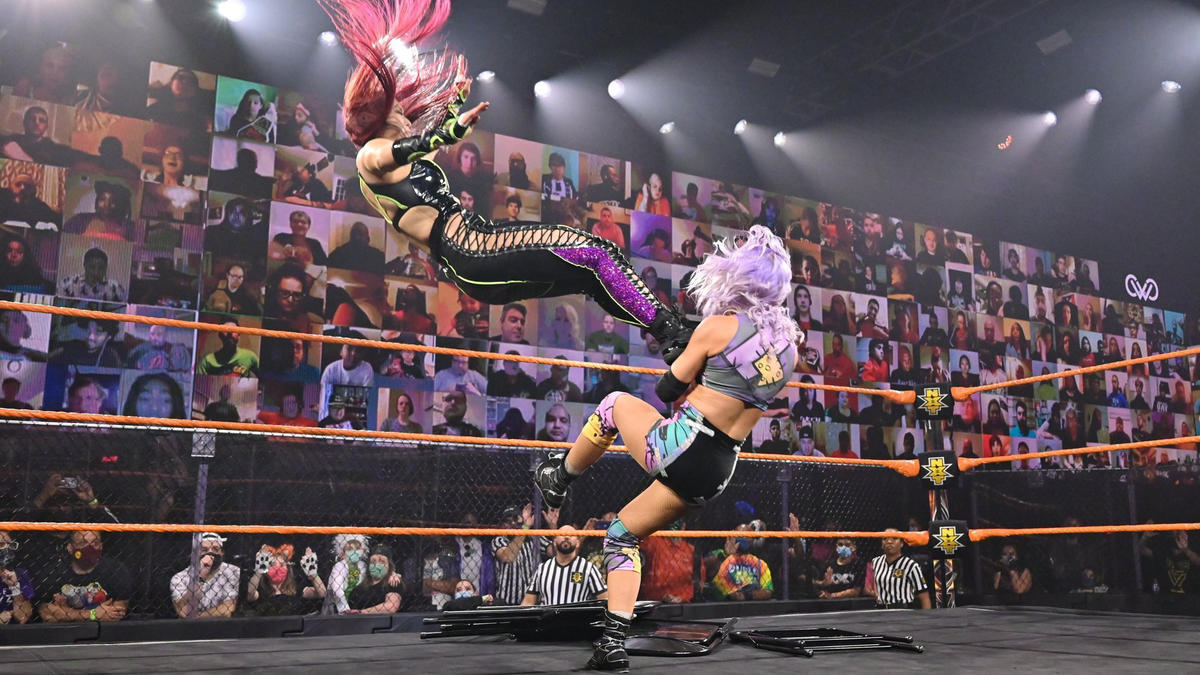 Shirai and LeRae main evented the evening with this “Tables, Ladders, and Scares” match. Huge props to both Vic Joseph and Wade Barrett, who repeated that stipulation multiple times with completely straight faces. Io started things off with a big dive to the outside, but Candice fires back. As the ref hooked the title above the ring, Candice pulled out a bag full of dismembered body parts from under the ring, which Shirai used to slap her challenger around a bit. They fought to the announce table, where a big eight from LeRae sent Io flying. The two battled on the outside during commercial and we came back to Shirai setting up a ladder in the ring. She tried to land a moonsault but Candice rolled away just in time, sending her crashing into a pile of chairs. Shirai got her back with a suplex into a chair, then missed the double knees and went right into a ladder. The intense physicality here helped this match stand out among their previous ones- both women really took a beating. Candice but then both through double tables, but Ghostface ran out again to physically push her up the ladder. This means it’s someone who stans both Mr and Mrs Wrestling, so my money is on Chuck Taylor jumping ship. Shotzi dropped Ghostface on the chairs to even the score, but Candice was so out of it she took a full minute to remember how her arms work. Io shoved her ladder over, sending the challenger from 15 feet through another ladder and probably dying for our entertainment. Shirai ascended the ladder and retained, while Johnny took a break from admiring his reflection in the NA title to call around to funeral homes. While it may have been expected, I’m mixed over Candice losing yet again- it’s starting to feel like NXT has waited too long to pull the trigger. She’s put on some absolute bangers since coming to WWE, but at this point, she can’t feel like a legitimate challenger without some serious rehab.