It’s been a few weeks for wrestling. On the heels of talent testing positive for COVID-19, and the reveal that many workers hadn’t been getting tested at all, WWE also faced down multiple serious allegations of sexual assault leveled against various employees. While many of those accused have been let go, there’s still something that feels kinda weird about watching WWE right now. It might be the piped in crowd noise. It might be the NXT recruits decked out in all the merch that couldn’t sell. It might be the knowledge that even if someone literally died of COVID-19, the show would undoubtedly still go on.

Yes, WWE is a bad company that generally produces a mixed bag of matches, but even the worst clock is right twice a day. This week, NXT revived the Great American Bash, and some of it was red hot. Like, really good. Just great wrestling to watch. Obviously I’m talking about Io Shirai vs Sasha Banks, but there was some other solid stuff in there too.

Let’s take a look at a few things from Triple H’s adopted baby that actually landed this week: 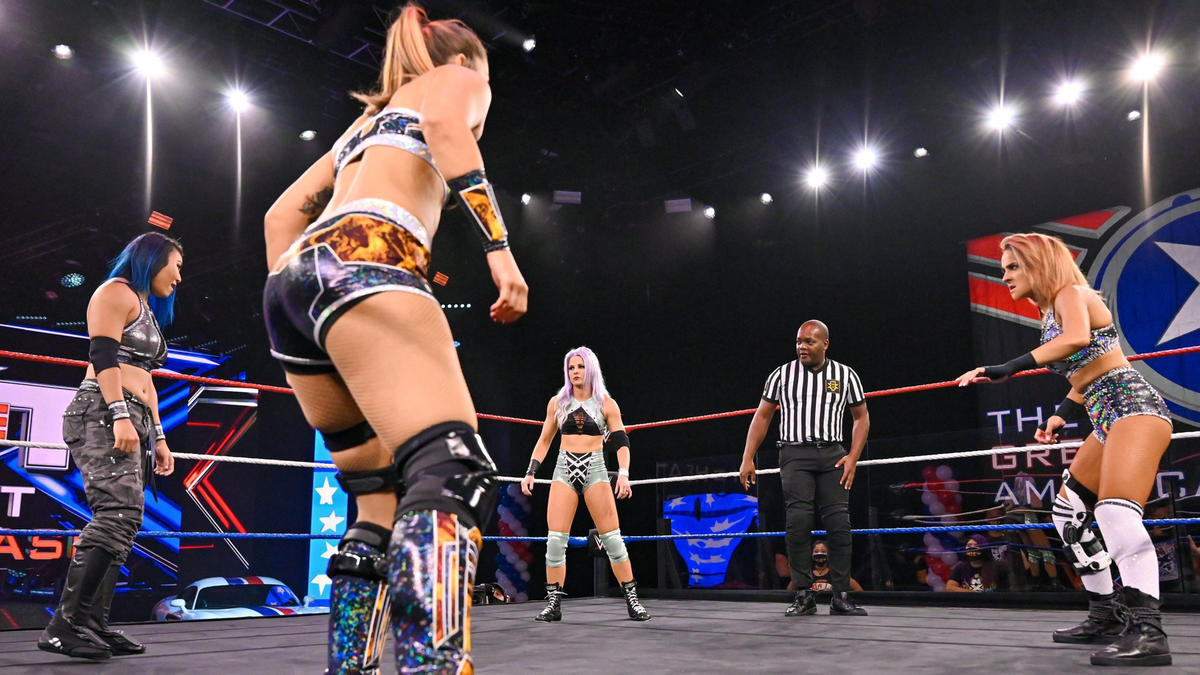 To open night one, we got a fatal 4-way determining the NXT women’s championship’s #1 contender. Mia Yim, Tegan Nox, Dakota Kai, and Candice LeRae battled it out in a short but very sweet match. We started out with Kai going after Nox and Yim laying out LeRae. LeRae rolled up Yim, but the HBIC kicked out. Nox and Yim teamed up to take out Kai, then eliminated the pastel pixie. Kai was on her own against the faces, until Yim accidentally took out her ally. Kai ran in with a sneak roll up to eliminate the HBIC. It was down to Kai and Nox, which is unfortunately kind of boring in my book given how often we’ve seen these two go at it. Dakota landed some great kicks, but Nox hit the Shiniest Wizard to secure her spot as #1 contender.

NXT’s women’s division is one of its brightest spots. Even though it also suffers from the same multi woman matches in an attempt to build a midcard that we see on Raw and SmackDown, they tend to deliver more often than not. This was no exception; while easy money may have been on Yim or LeRae to win, Nox as the new challenger could be great. I could have done without reviving Nox vs Kai yet again, but that’s a recurring problem with NXT across the board. A fun opener that definitely makes me want to tune into Shirai’s next title defense. 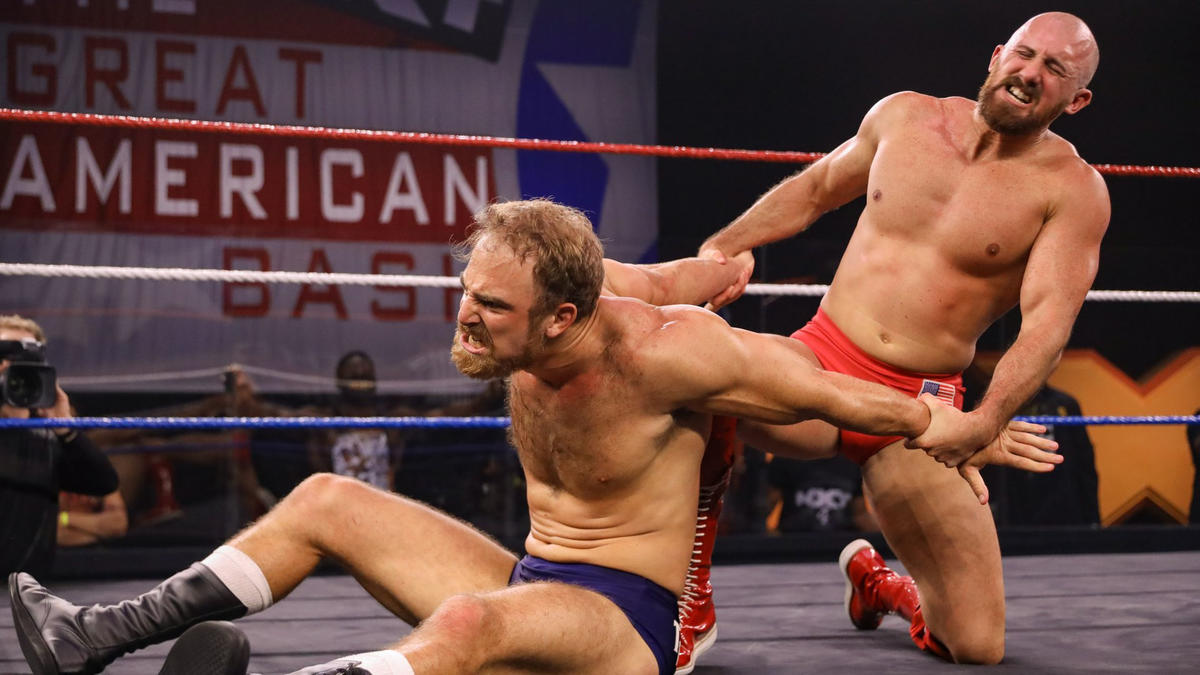 I keep forgetting that Timothy Thatcher signed. It’s like every time they announce him, I have a moment of “oh shit, Thatcher? In NXT? For real? Foot tat and all?”

This is still among Thatcher’s first few WWE matches, and putting him against Oney Lorcan was honestly a great call. Both scrapper, bruiser types, Thatcher and Lorcan have worked together multiple times on the indies. There was always the vague fear that they’d make him wrestle the NXT main event style, but this match was a treat for people who love to say things like “grit” and “catch wrestling.”

The two spent almost all their time down on the mat, trading holds and wearing each other down. Thatcher focused on Lorcan’s left arm, working it over for his armbar later. Lorcan sells “crazy man won’t stay down” better than most, and kept getting out of Thatcher’s submissions. We got some vicious chops from both men that made me clutch my chest in pain. Oney hit his half-and -half suplex, but Timmo kicked out at 2. Both exchanged shots in the center of the ring, with Lorcan coming out on top. He got Thatcher in a Boston crab, but the no kneepads legend escaped. He locked in the Fujiwara armbar and forced Lorcan to tap, giving him yet another victory in NXT.

Personally this was right up my alley, so this is a close second to Shirai/Banks. Just two angry dudes trying to bend each other into pretzels. It doesn’t get much better. 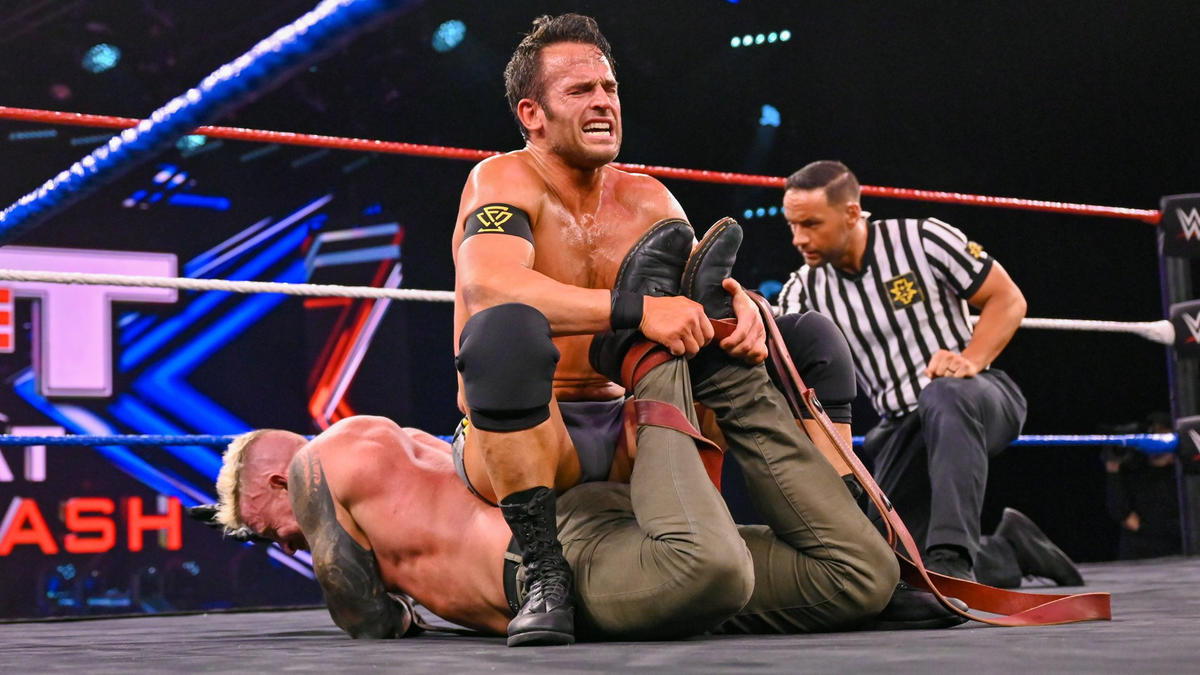 The words “Roderick Strong” and “strap” peak my interest, not gonna lie. This was NXT’s first strap match, in fact, which is crazy when you think about the jokes we could have been making for years. Roddy has been trying to avoid Lumis for weeks, probably because he doesn’t understand his whole gimmick. Is he a butcher? A serial killer? A barber? Who knows.

This started with Strong attacked Lumis before they were tied together. Once the strap was strapped Strong tried to escape again, but Lumis dragged him back in the ring. They brawled on the outside for a while, making their way to the stage. Lumis opened the car trunk, but Roddy used the strap to pull him into the edge of the stage to avoid having to kick out a Dodge Viper taillight. Roddy hit an Olympic Slam on the ramp, tossing Lumis into the ring. He landed some whips with the strap, going for a cover, but Dexter kicked out. Lumis took control again, which is a heavy feat in those skinny army jeans. Bobby Fish ran in to knock down Lumis, because UE means family, but Lumis still kicked out. Lumis used the strap to take out Fish, then wrapped Roddy in the strap and forced a tap out.

This was a fun, physical match that used the stipulation well. I don’t get Lumis’ thing, but his style is intense and worked well with Strong here. Undisputed Era has managed to remain hugely popular as a faction due to the chemistry of the group as a whole, and the unique aspects each member brings to it. While Roderick Strong may not have the comedic timing of O’Reilly or the wild intensity of Fish, he has his own dorky dad charm. He plays the smarmy idiot almost as well as Cole, but it’s the anger and intensity that makes him stand out. He worked fantastically with Lumis here, and I wouldn’t hate seeing them have a rematch down the line. 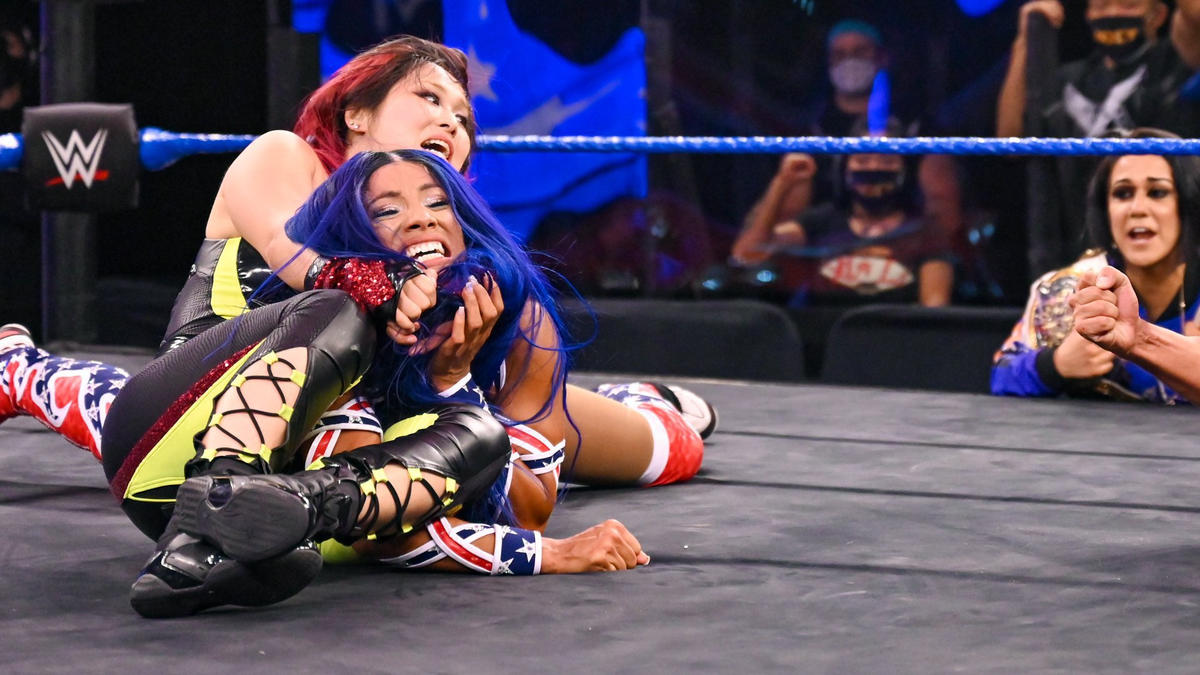 Banks and Bayley rolled up to the PC in a sweet ride wearing their most patriotic gear and carrying Sasha’s dog. Io did her normal schtick and cared about America about as much as anyone else these days. Sasha and Bayley tried to antagonize Shirai, but as she’s shown to dumbass fans, she’s really above all of that.

We started out with some competitive back and forth, until Shirai got the upper hand. She landed a missile drop kick and a suicide dive onto Banks outside the ring. Sasha has a lot going for her, but her ability to bump like she’s literally dying in front of us is one of her best. Bayley honked the horn to distract Io and let her stepson know she was outside to pick him up. Sasha took control, putting Io in a submission until Shirai escaped. She hit a Frankensteiner and another drop kick, laying out Banks. The two went back and forth again, Banks pulling out all her finishers, but Shirai managed to escape every time. Io had Sasha in a hold, so Bayley tossed her title into the ring to distract the ref. As he went for it, she clocked Shirai in the face. Bayley and the ref fought over the belts, and Asuka appeared ringside, spitting green mist and let’s hope nothing else into Sasha’s face. Shirai took out Bayley, then landed a moonsault and pinned Banks.

Everything about this match delivered. I watched the whole thing twice and I actually can’t remember the last time I did that for a WWE/NXT match. Two of the most talented women in WWE today. Shirai has an incredibly bright future as champ ahead of her, and I can’t wait to see her reign continue. Banks and Bayley remain entertaining as a duo, and seeing them return to NXT is always fun. Asuka’s interference was a little gimmicky but it worked here, given that she and Banks will face off at Extreme Rules. If you watch anything WWE did this week, it should be this.

[Ed. Note: We took last week off of recapping because I couldn’t bring myself to make anyone watch wrestling while having emotions and thoughts about the massive problem of abuse and misogyny in wrestling and the absolutely bananas insistence on continuing to have wrestling shows where no one is wearing masks when there’s still, still a global pandemic going on, even in the company itself, and actually getting worse than ever. Resuming WWE coverage is never something I take lightly, but there’s still some great stuff happening on their shows and I (correctly) trust Mer to talk about those good things without hiding the fact that WWE is still behaving atrociously.— LB Hunktears]