Huge dudes, renewed rivalries, and more false finishes then you can shake a stick at.

TakeOver is a testament to the fact that WWE is capable of putting on a good show when it doesn’t have to be 5+ hours long and full of matches people aren’t very interested in. We were in and out Sunday night in a tight 3.5 hours, and honestly even that felt a little much. The night saw a title change, some surprise appearances, and the painful renewal of the same old story. 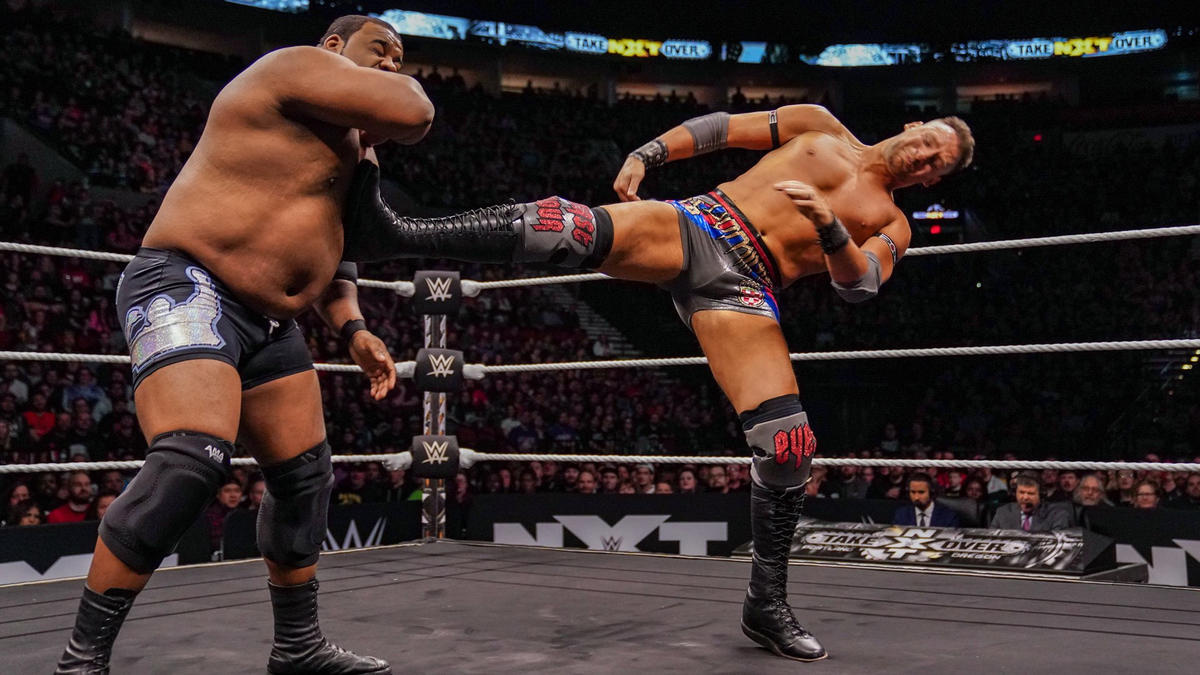 A couple of big buff boys started us off for the evening. Much of this was devoted to showing just how evenly matched the two are. They traded great athletic spots, with Lee landing a standing rana that gave Mauro his first aneurism of the night. Dijakovic then attempted a dive to the outside but was caught by Lee with ease. If you liked their previous bouts on NXT, or their PWG match from a few years ago, this was more of the same with a few extra false finishes thrown in. Large men doing things meant for much smaller men is still impressive, especially considering the absolute terror that must come with a 6’7” dude hurtling himself towards you in the air. After each got to hit their finisher, including Dijakovic managing a Feast Your Eyes from the top turnbuckle, Lee ultimately won with the Big Bang Catastrophe. After the match, he helped Dijakovic to his feet and the two shared a very strong hug. 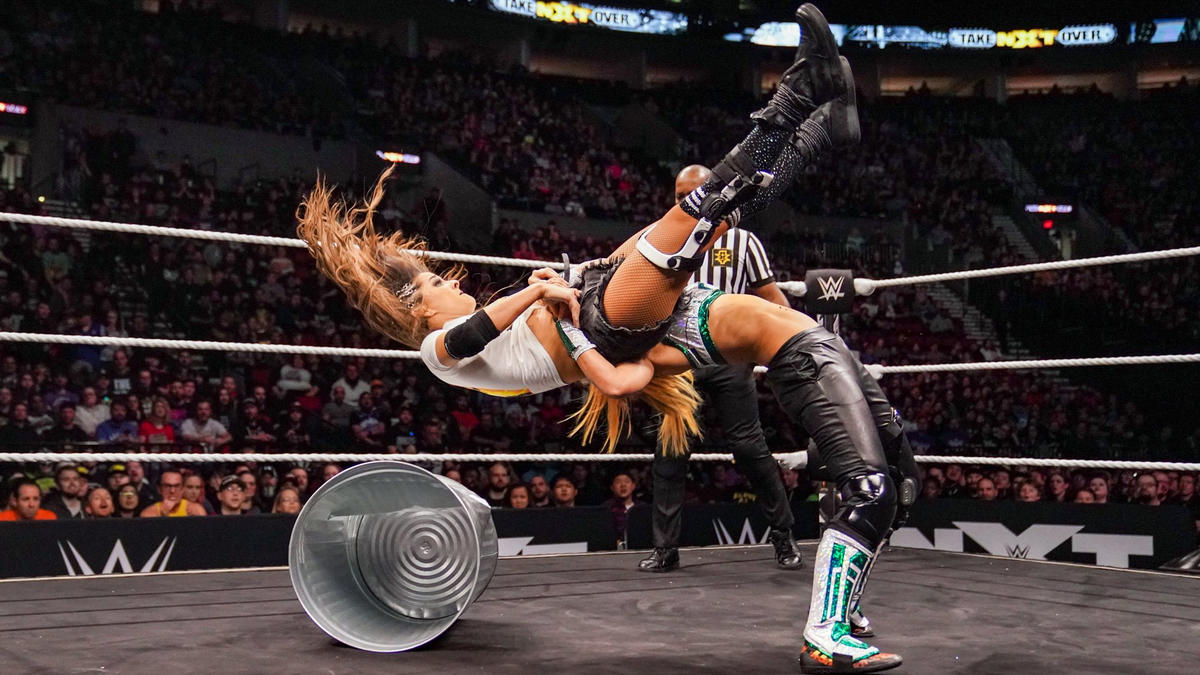 Dakota ambushed Nox during her entrance and right away the two started into the crowd. They worked their way to the ring for the bell to officially sound, with Kai trying to get the early pin. When that didn’t work, she went for some toys, pulling out a trash can and a cricket bat, to emphasis how un-American this match was. Nox turned the tables for a bit when she dunked the trash can on Kai’s head and showed off her Shiniest Wizard, but Kai managed to dominate for much of this. We hit all the street fight classics when Nox was duct taped to the ring post, with Kai delivering a super kick that ripped her free. Nox then went for Kai’s previously injured knee, slamming her leg in a steel chair and effectively taking her out. Tegan claimed she still wasn’t done and brought in a table, but Raquel Gonzalez interrupted and threw Nox through the table instead. The crowd seemed wildly confused and unfamiliar with Gonzalez, which was fair considering how little time she’d been given on NXT TV. Kai the threw an arm over Nox to get the win and was helped up by Gonzalez.

Verdict: Good use of the stipulation in a feud that warranted it, and some great intensity from both women. The finish falling so flat was unfortunate, but the match itself was still fun. 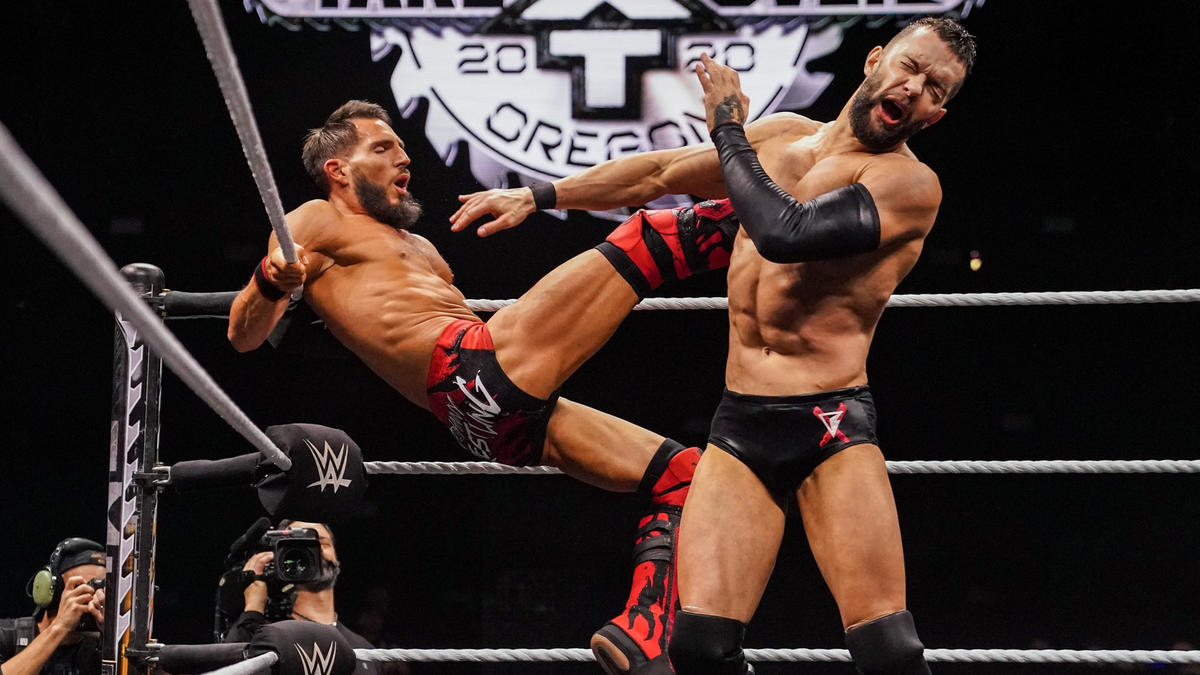 Two NXT legends enter, but only one pasty king can leave. Bálor and Gargano worked really well here; Gargano is such a natural underdog that he’s at his best against nasty heels trying to dismember him. There was a wild bit where Finn had him in a submission and did some push ups, which was definitely just an excuse for a long ass shot, but I’m not gonna complain. Finn almost repeated the 1916 outside the ring, but Gargano got out and tossed him into the stairs. Gargano rolled out of the way of the Coup de Grace and locked in the Gargano Escape, but Balor got to the ropes to break it. This is where we hit the extremely NXT-ness of it all, with each big spot earning a 2.99 count. After a drop kick off the table on the outside, Finn won with the Coup de Grace, followed by 1916. He pinned Johnny with his whole crotch in his face and it was definitely on purpose. Like all of it was just there. 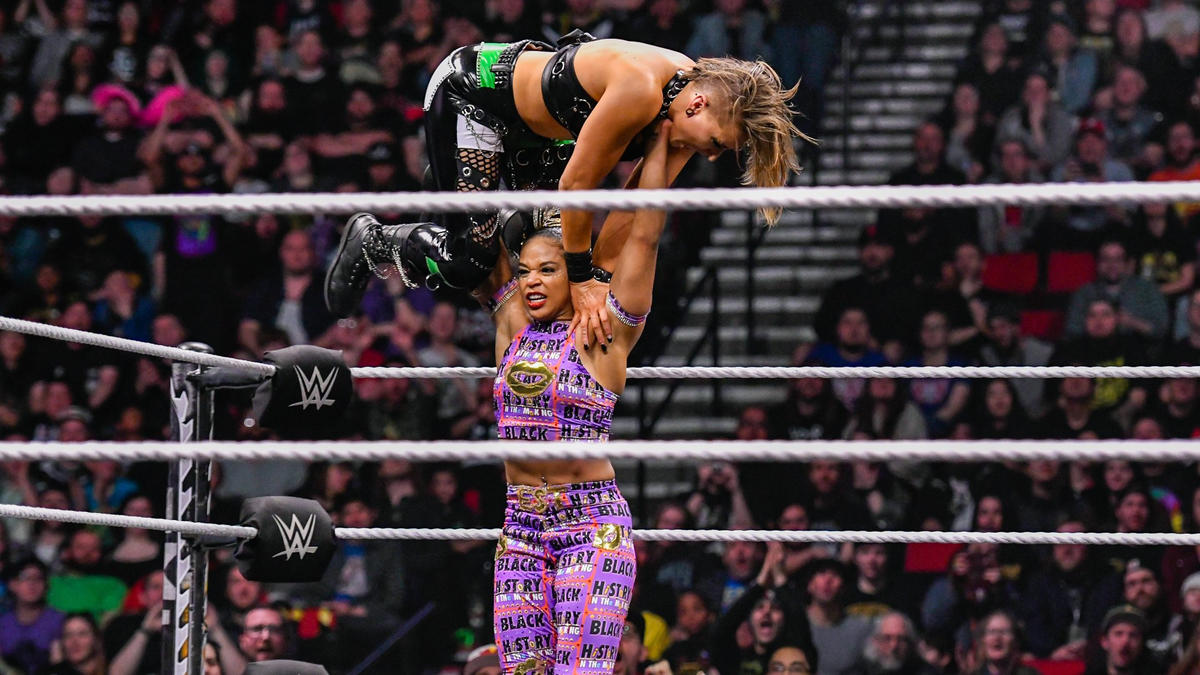 Bianca wore an incredible “black history in the making” cape and was an absolute showstopper from the first note of her theme. We got a hair whip fairly early on, ending a nasty slap fight between the two with Ripley perched on the turnbuckle. Neither was able to get the upper hand for long, with both countering each other’s finishers. Both women got dueling chants throughout and for a bit the crowd just yelled “women’s wrestling,” in case you forgot what you were watching. Belair hit a spear and went for the KOD again but Ripley slipped out. She was able to hoist Belair up and hit the Riptide to win.

Immediately after the match Charlotte snuck in and wiped out Ripley, declaring she’ll see her at Mania. I was expecting Charlotte to interfere earlier and potentially cost Belair the match, but there’s only so many hours in the day to take very suggestive pics with Andrade and still hit your cue. On her way out of the ring she tossed Belair into the steps as well, so there’s hope to my triple threat dreams.

Verdict: My match of the night! Really good chemistry between both women and, as much as Belair deserves a title run sooner rather than later, the right call with Ripley retaining. 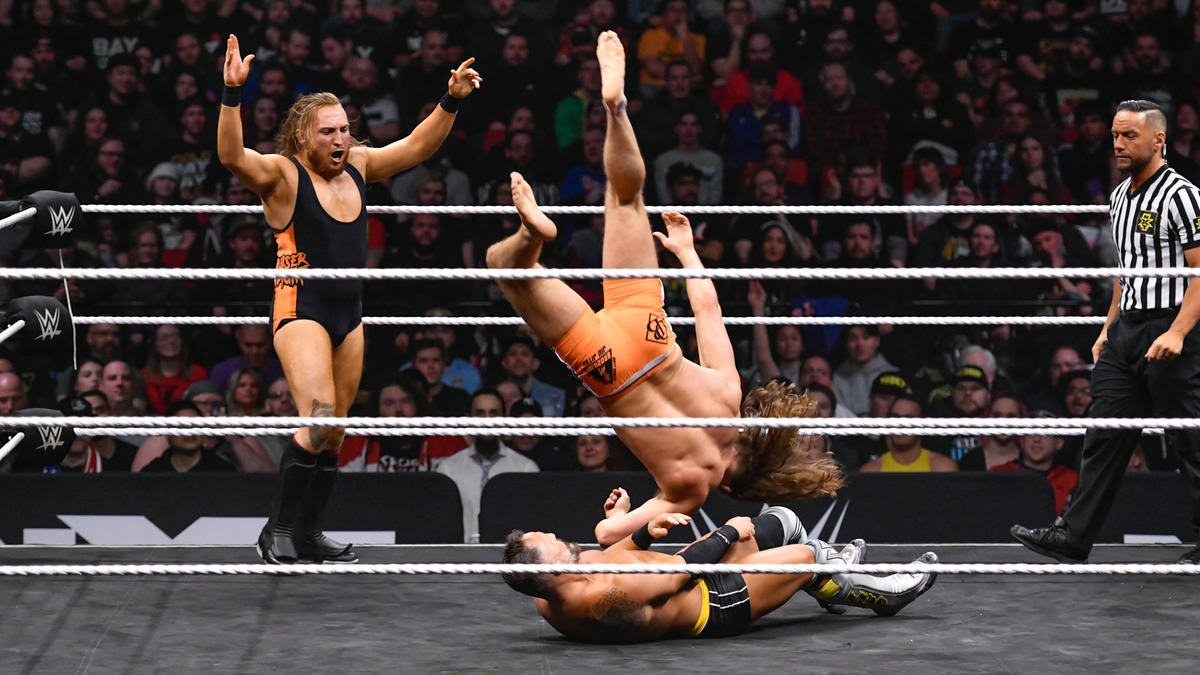 Riddle and Dunne came in riding a golf cart and wearing the most boring shirts I’ve ever seen. Riddle got the crowd to sing his Bobby Fish song while we saw a terrifying graphic on the tron of Fish’s head on a bass’ body. This match was already living up to my expectations. In the ring, UE started out working on Dunne, but Riddle made the tag and went wild, taking out Fish and O’Reilly. The Broserweights have gelled together as a team so quickly, it’s great to see them match a duo as experienced as Fish and O’Reilly. All four men looked excellent throughout, with some great double team maneuvers and twin submissions. After an accidental spear from Riddle to Dunne when O’Reilly got out of the way, the two hit the tag team Bro to Sleep on Fish, winning the titles. The two celebrated by immediately putting the belts in their mouths.

Verdict: Really fun match from two very entertaining teams. A deserved win for one of the best things NXT has going right now. 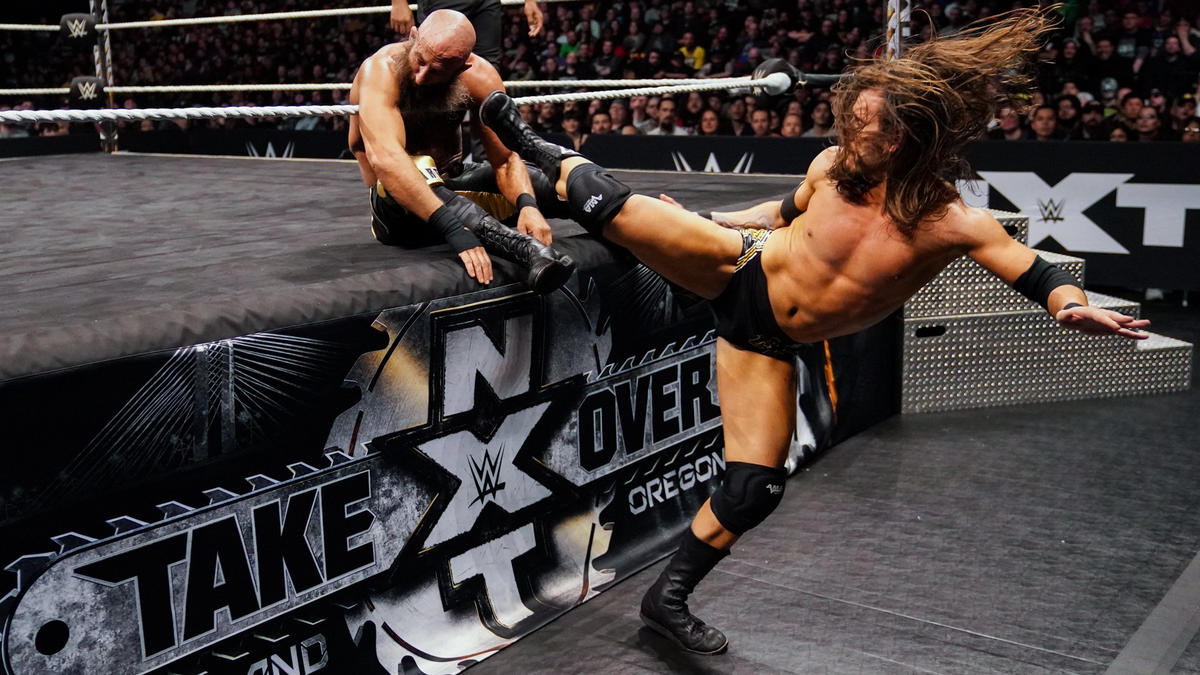 Early on, Ciampa got so hyped after taking out Cole on the outside that he kissed a fan’s head, and the man was so excited he gave a little jump. Wrestling is beautiful, actually. Cole sent Ciampa back into the commentary table, and went for Panama Sunrise twice, but Ciampa evaded. Cole got put through the announce table twice, but somehow still kicked out in the ring. Mauro was losing his absolute mind, and the match hadn’t even hit 10 minutes. Cole pulled out the knee for the Last Shot, but Ciampa rolled to the outside. UE ran in to support their favorite raccoon, with Strong distracting the ref while Fish and O’Reilly took out Ciampa outside the ring. Ciampa still kicked out, and there’s a wild interaction as O’Reilly grabs the title to give to Cole, but gets knocked into Ciampa, who wipes out the ref. Cole lands a low blow, but Ciampa has balls of steel and still hits the Fairytale Ending. With no one to count, the crowd got to five as we remembered how fragile referees are. Gargano then showed up, grabbed the title and hit Ciampa to help Cole retain.

Verdict: I’m so tired. Every time I start to genuinely like Gargano and Ciampa on their own they put them back in this never ending feud and we have to pretend to care like it’s 2017 again. I can’t do it anymore. The cyclical nature of this story is just so absurd and boring at this point that it’s made both men take a hit. It’s bizarre how NXT won’t let them escape each other’s shadow, especially given how massively over each is on their own. The well of #DIY betrayal ran dry around mania 34, and yet we’re all still here watching yet another turn.

The actual match between Cole and Ciampa was good here, if a bit long. Cole retaining was the best call, as it seems more likely someone like Balor will pick up the title in Tampa.