TakeOver 31 came to us from the Capital Wrestling Center, which is inside the Performance Center, which is inside Orlando, Florida, a state that saw over 1,500 new COVID-19 cases on Sunday. So, naturally, this also marked the return of real live fans alongside their virtual counterparts. To their credit, WWE revived the plexiglass market to try and keep fans sectioned safely, but they couldn’t stop cutting to people wearing their masks improperly, and the whole thing just made me feel super uncomfy. Of course, this is all a-okay in Florida now, it’s just hard to look at somebody’s nose poking out of their mask and germing up the place while I’m trying to enjoy Candice LeRae’s fashion statement. She was wearing a purple duster! Purple! 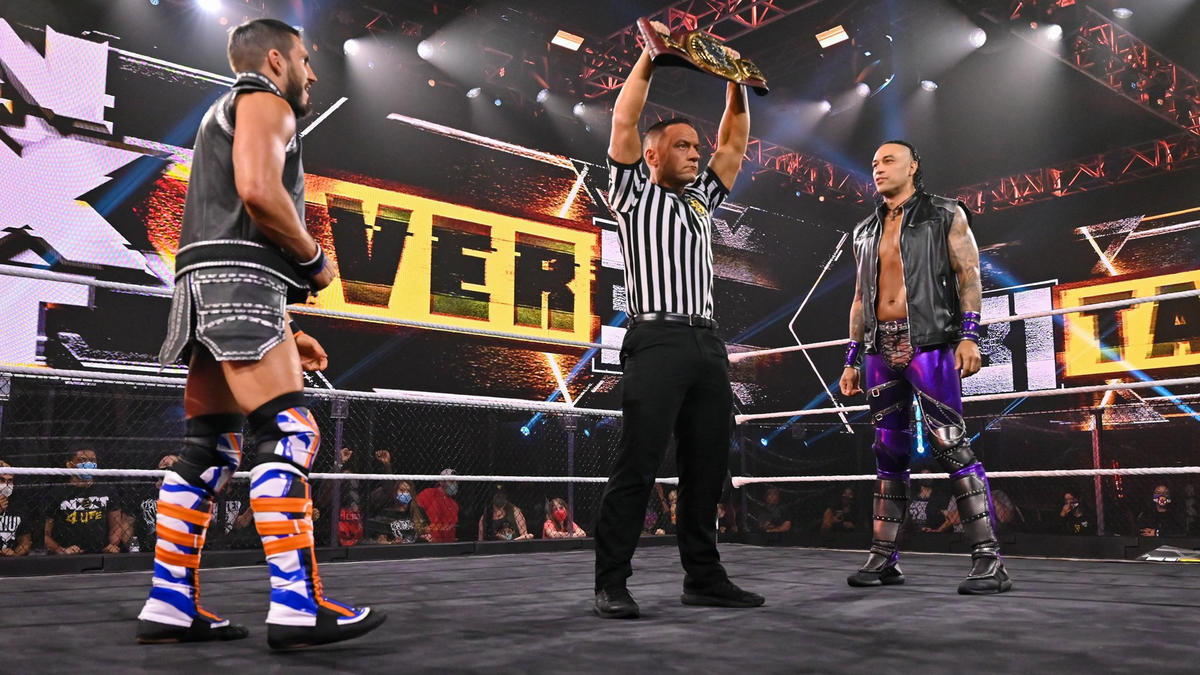 The North American championship and two heavy metal dudes started us off for the night. Gargano came out of the gate hot, emboldened by what I guess was a Star Wars cosplay, getting Priest tangled in the ropes and hitting a big senton. Gargano was able to counter several attempts at the Razor’s Edge, until Priest finally landed on one the apron, and Johnny barely kicked out. He ran to the outside and tried to sacrifice various security members to avoid Priest diving to the outside, then managed to hit a low blow on the champ. He pulled Priest in the ring and landed a super kick, but still couldn’t get the pin. That’s crazy, because dick kicks have never let Johnny down in the past. He got Priest in the Garga-no Escape, but the infamous archer refused to tap. He countered Gargano’s DDT to land The Reckoning and retain his title. This was a fun match and a speedy opener; Gargano and Priest worked well together. I’m sure we’ll see them go at it again in the future.

[Ed. Note: This is the part of the show where Velveteen Dream, whose alleged grooming of minors has not been sufficiently addressed by WWE, wrestled. As I outlined when #SpeakingOut got going in June, Fanfyte stands in solidarity with survivors of sexual abuse and violence. As a section, we strongly condemn the continued booking and push of Velveteen Dream. I did not make Mer watch this match, so it’s not in the recap.— LB Hunktears] 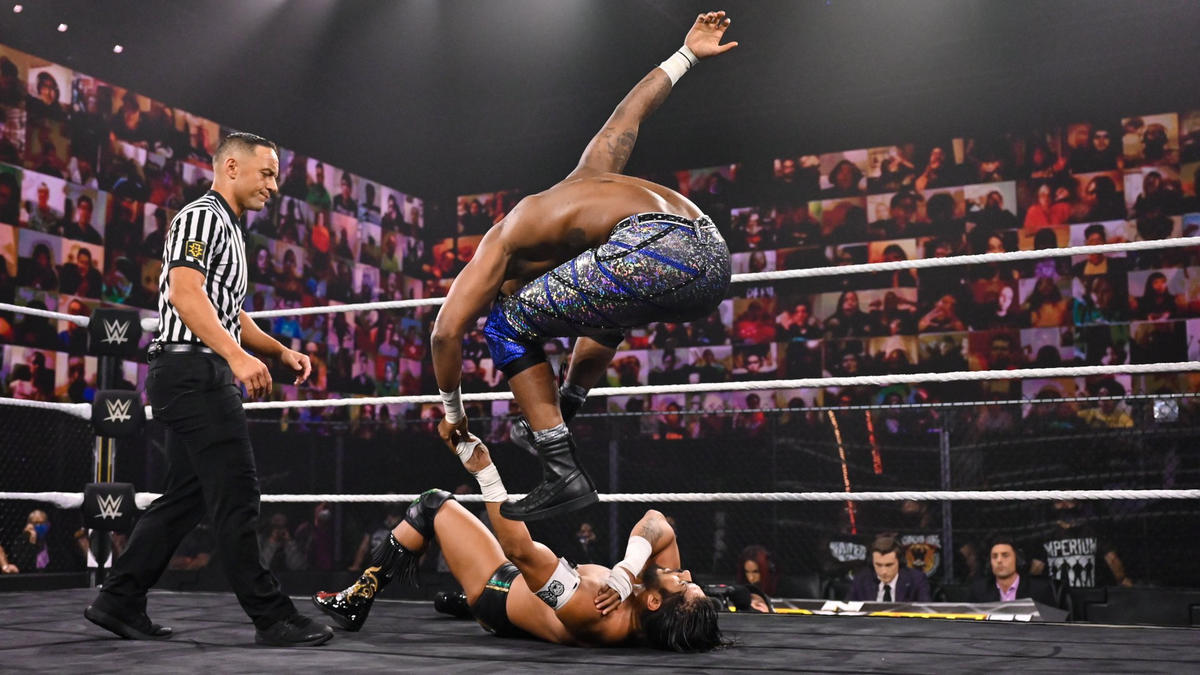 Escobar controlled the beginning of the match, landing a Frankensteiner on Scott. He was a very mean boy and called Swerve names until the challenger fired back, hitting a string of moves including a DDT to wipe out the champ. Legado del Fantasma came out to distract Swerve with their unmatched handsomeness, letting Escobar make a comeback. Ashantee “Thee” Adonis then came out to even the odds and back up Scott. Escobar managed to hit the Phantom Driver, but Swerve just kicked out! Scott battled back with a House Call and a 450, but Escobar kicked out too. Both guys ended up on the apron, and Santos pushed Swerve into the ring post, hitting his head. He took him back in the ring to hit a facebuster and win the match. This was a great showing from both men, with some really fast paced sections. I personally could have done without the back to back kicking out of big finishers, but maybe that’s a me problem. 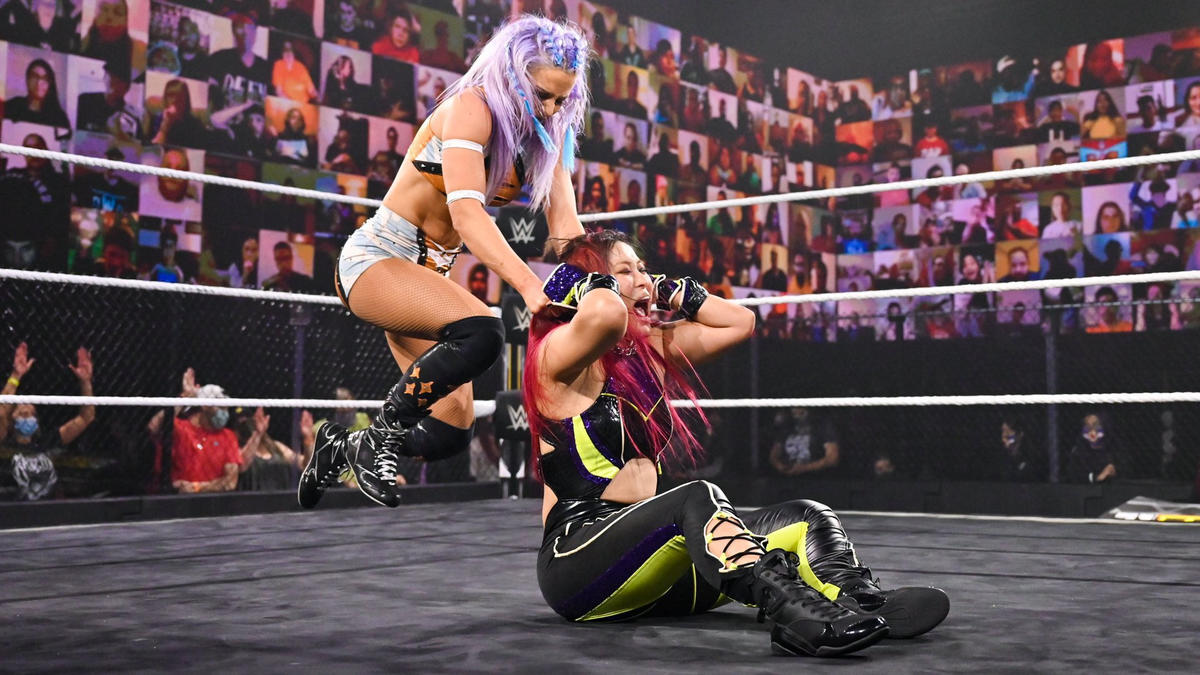 We got some big high flying from both women here; Shirai landed a perfect Asai moonsault onto LeRae off the middle rope. She went after Candice hard, making a few pinning attempts and easily countering any offense LeRae managed. Candice got the champ in a submission, but was forced to break the hold, and accidentally elbowed the ref in the face. Being made of glass, this was detrimental to the poor man’s health, and he passed out. LeRae got her feet up to block a moonsault and hit Wicked StepSister, but there was no ref to be found. Not to be outdone by Legado in the “unnecessary interference” department, Johnny Gargano ran down in a striped shirt to make the count. Shirai kicked out, so Johnny brought the title to the ring and argued with the ref. Candice used the opportunity to clock Io with the belt, but still the champ managed to kick out. She’s stronger than all the refs put together. Shirai landed a Spanish Fly and an excellent moonsault on LeRae to get the win and retain her title. This match started out great, and the intensity between LeRae and Shirai was palpable. It would simply be nice to let Candice exist without her husband for a hot minute.

Post match, Toni Storm announces that she’s on her way to NXT, and she wants the women’s champion. We then get our first look at the woman behind the mystery motorcycle vignettes of the past weeks- it’s Ember Moon! She’s got a sweet mohawk and a leather jacket now, and it’s very nice to see her back. Io seemed happy to see her as well, and that is a match that I am really looking forward to. 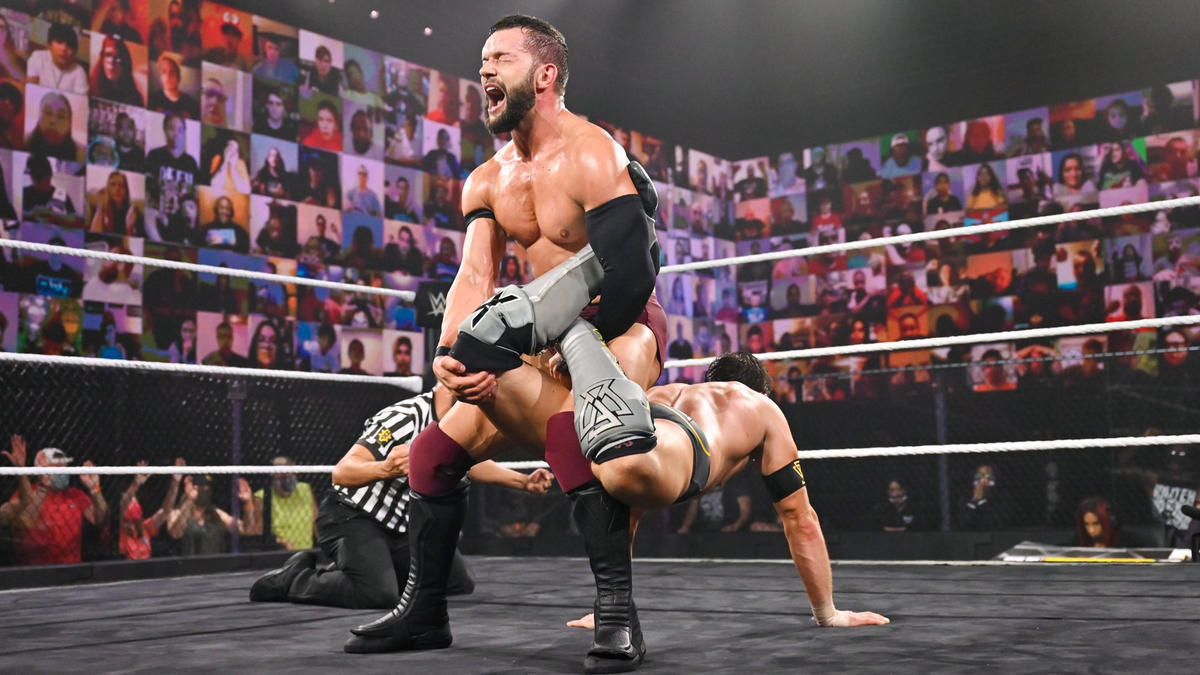 KOR did not come to play in this one, bringing his a-game against Balor. He grounded the prince early, working on his arm with a series of holds. Finn came back with a big dropkick and turned the tales, keeping O’Reilly on the mat. Kyle managed a chain of huge suplexes, and the two traded the upper hand back and forth. We got a lot of very fluid submission attempts between both men, until O’Reilly got to the edge of the ring to break the hold. They traded hits and kicks- Kyle got an armbar, but Balor fought out. Finn hit 1916 for a 2.5 count. O’Reilly hit a huge jumping knee and got Balor in a heel hook, but again the champ was able to get a break. Finn hit his challenger with two double stops and finally the Coup de Grace to finish him off. Both guys looked like they were bleeding from the mouth here; this was definitely hard hitting for each of them. A great, physical match that really gave O’Reilly a spotlight as a singles competitor. It was slightly long for my tastes, but that’s really the only complaint.

After the match, Ridge Holland (1920’s policeman) came in with a beaten up Adam Cole and dropped him ringside. Strong and Fish ran in, and the the Era was left befuddled.

O'Reilly and LeRae were standouts of the night, plus an impressive effort from the cruiserweights