WCW has been tripping over their own feet recently, with booking more convoluted than the final season of Game of Thrones. This week we’re building towards the Great American Bash, and it’s father vs son, uncle vs nephew, Scott Steiner vs the English language. 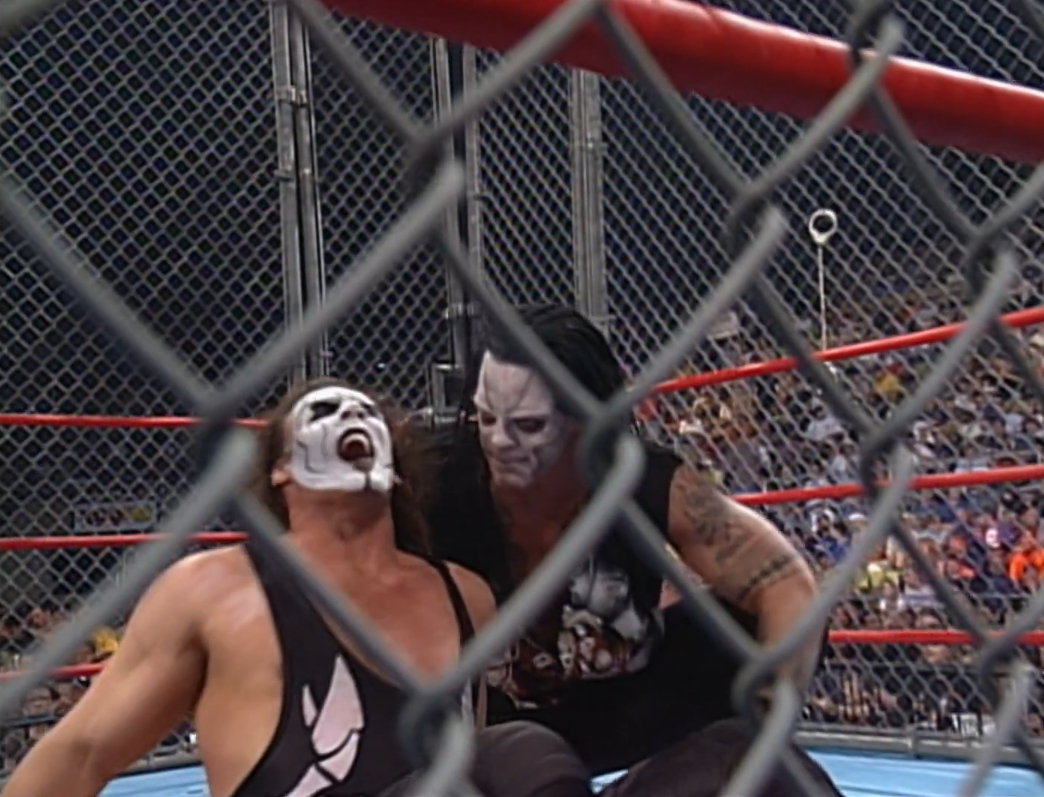 After having a really rough time last week, Sting opens up Nitro with a House of Pain match against ring dweller and newly certified ambulance driver, Vampiro. This match doesn’t have a ref, no pinfall or submission, and can only be won by shackling your opponent to the chain wall of the cage. A super normal thing to ask of two dudes in a workplace. Vampiro locks the cage before Sting can enter, forcing him to climb the outside and break a hole in the top to get in. Vampiro takes control, suplexing Sting, but the icon reverses a drop kick attempt into a power bomb. He gets Vampiro against the cage wall and locks in the handcuffs. Commentary sells the bat, but Sting opts for a few splashes before exiting the cage. Finally, Vampires as a species are defeated by their one true enemy: eBay handcuffs. I’d say I hope this story’s over, but I worry there’s a few more gimmick matches they can squeeze out of it. Chris Candido and Tammy come out to announce themselves as the first couple of wrestling, which is kind of a surprise given Lex Luger and his back muscles are in the same promotion. They issue an open challenge to any other couple who wants to prove themselves, and Candido is willing to put the Cruiserweight title on the line. I guess this means that Tammy was also champion this whole time? She was really humble about it. Out come Crowbar and Daffney, and we get a mixed tag match. The two guys start us off as Miss Hancock comes on the ramp to watch. She’s not relevant to this story at all, but it’s 2000, and there’s a quota of women in skimpy outfits we gotta meet to keep this show on air. Daffney saved Crowbar from a pinning attempt, leading to Crowbar suplexing Tammy. Commentary can’t stop selling this “full male on female contact” for the cruiserweight title. So that’s where 205 Live went wrong. After a Bronco Buster from Daffney to Tammy, Miss Hancock starts to dance on the ramp, for literally no reason. The crowd is super mild for it, but honestly she’s only giving it her B-game. Not a lot of effort. While everyone is kind of distracted, Crowbar takes out Candido on the ramp, and Daffney rolls up Tammy to win the match. This should definitely make her Cruiserweight champ, but the belt is handed to Crowbar, because the world is unjust. 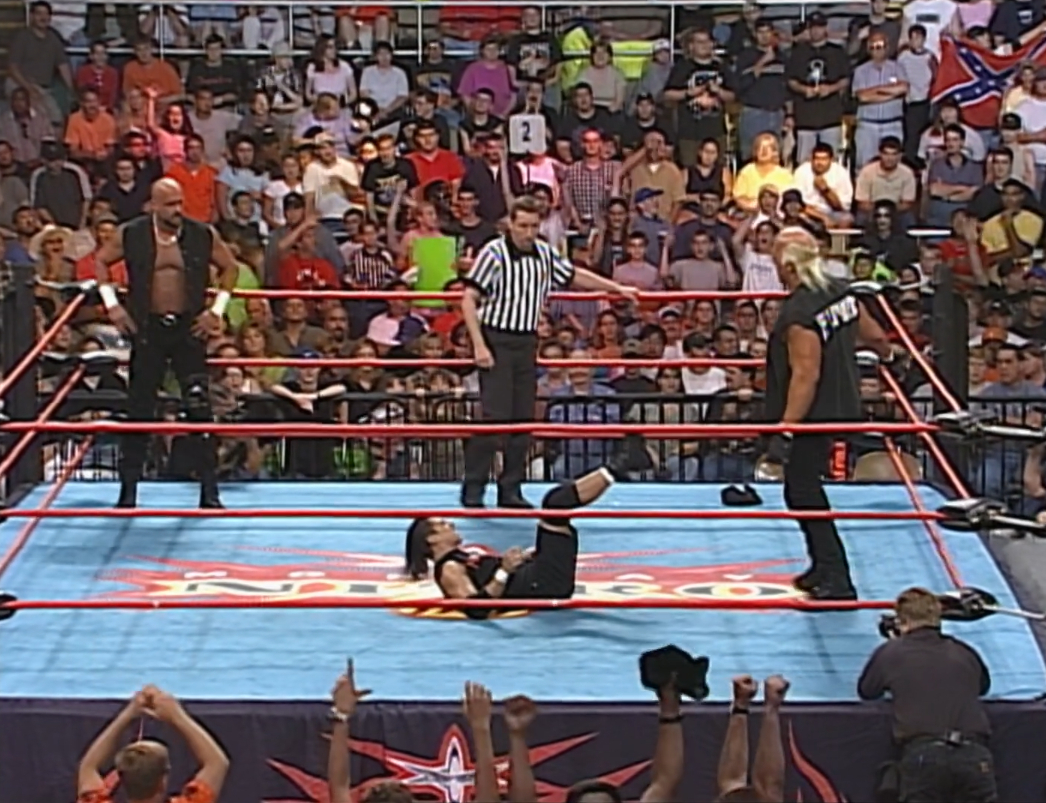 Bischoff has recruited Horace Hogan to the New Blood, which means even Hulk’s family is turning on him. This is some very clear foreshadowing here. We got a three way dance between the two Hogans and Billy Kidman, who literally just keeps getting his ass kicked every week. Most of the match is one on one as Hogan tosses Kidman around the ring and Bischoff curses on commentary. Horace refuses to get involved, sulking in the corner like he watched any of the other matches on tonight’s show. The crowd chants for Hogan, which is insane because had I been old enough to attend a wrestling show during this time period and laid eyes on Billy Kidman, I would have dedicated my entire life to sports entertainment. Horace looks to be helping Hulk as he keeps Kidman from escaping the ring, which makes Bischoff confront him. The Filthy Animals come to the ring for some reason, and uncle and nephew Hogan hit everybody with chairs. Suddenly, Torrie Wilson’s out on the ramp and winking at Horace, who then turns and slams Hulk with a chair shot. It’s a double-double cross here, because if the story makes a lick of sense, Eric Bischoff just isn’t doing his job. After Vince Russo visited the Flair household and got a weirdly uncomfortable close up of future 10-time women’s champ Charlotte looking mildly confused in her living room, Ric Flair gets a shot at the world heavyweight title as he faces Jeff Jarrett in our main event. Flair is experiencing some real inner turmoil about his family and his backstabbing son David, but you wouldn’t even know it as he drags Jarrett around the ring. The power of being a deadbeat dad wills Flair on, until Jarrett crotches him on the rope and takes over. David Flair and Russo are on commentary, but I tune out most New York accents, so I’m not really sure if they’re adding anything to this experience. Jarrett gets Flair in the Figure Four, but Flair gets to the ropes. After two low blows that are very clearly seen and ignored by ref Charles Robinson, Jarrett and his slap nuts start to bounce back, only for Flair to score a roll up and a quick win. Ric Flair is our new champ, much to Russo’s despair. Jarrett, David, and Russo take turns hitting Flair, and try to walk out with the title, only to be stopped by Big Sexy. Nash returns the title to Flair, and all is right for rich men of the world. 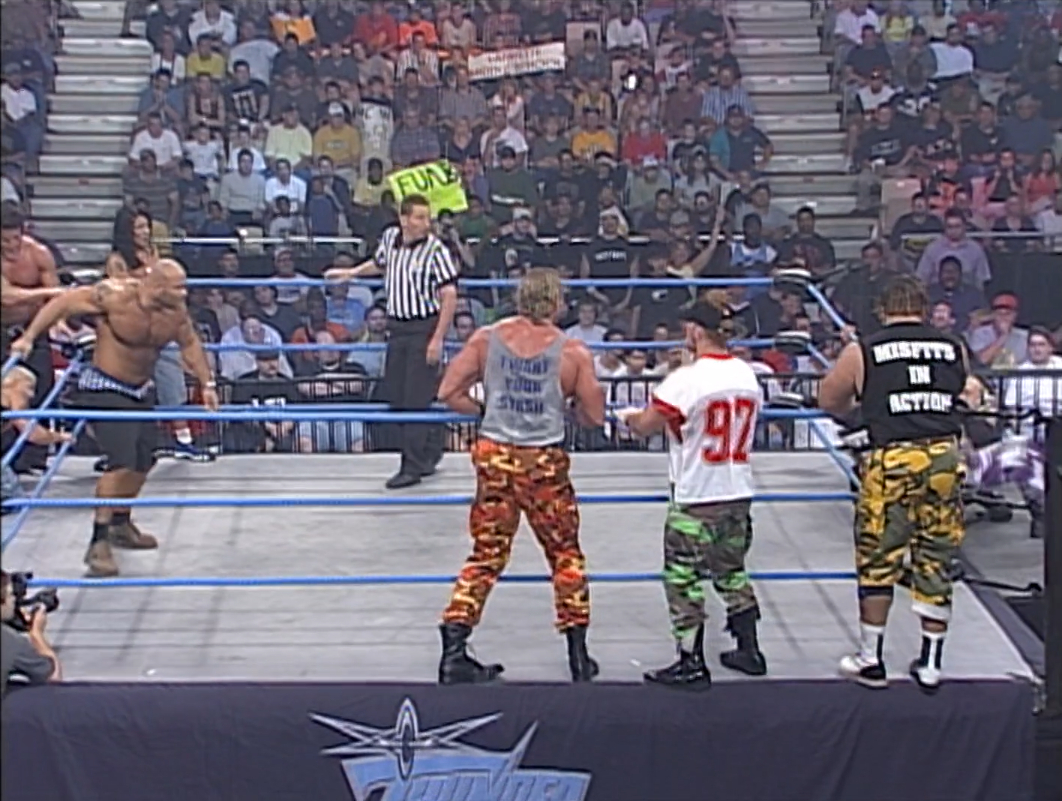 We start Thunder with a New Blood brawl outside in the parking lot; The Franchise Shane Douglas is in charge tonight with Bischoff nowhere to be seen (thank god), but not everyone’s happy about it. Konnan goes after Douglas, leading to Misfits in Actions, New Blood, and the Millionare’s Club going at it. This prompts an 8-man tag between Misfits in Actions (featuring their newest member, Major Guns, who is -you guessed it- a hot blonde in a skimpy outfit) and Filthy Animals. Juvented Guerrera welcomes everyone to St. Louis (they’re in Lafayette) and the match is on. There’s some decent back and forth between the two teams, if you ignore Major Gun’s one move being shoving someone into her chest. Guerrero hits Hammer with a hurricanrana, and both men tag out so it’s Major Rection and Rey Mysterio. Rection hits a power bomb and Shawn Stasiak comes out for unknown reasons, distracting Chavo, and the match is a DQ. We’re really playing fast and loose with the rules here, but I don’t think anyone on the writing team is too worried about it. The Misfits are attacked by the New Blood, but Booker T makes the save. 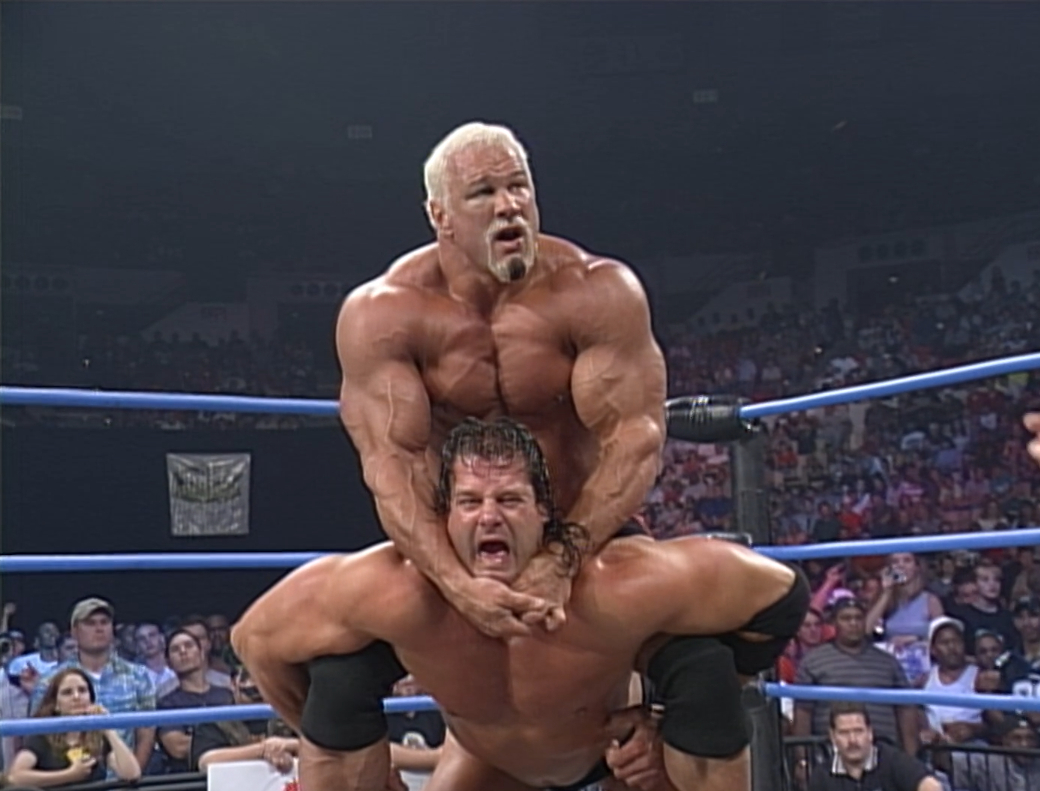 Mike Awesome is excited about his new career in healthcare, following the ambulance match with Sting last week. He issues an open challenge to anyone who wants to take on an essential worker. It’s Big Poppa Pump who answers, cutting a great promo about his allegiance to freaks worldwide and pronouncing “ambulance” in a way I’ve genuinely never heard before. And I’m from Baltimore. Steiner knocks out some push ups and arm kisses early on, but Awesome gets a sneak low blow. Steiner escapes the Awesome Bomb and gets Mike in the Steiner Recliner, but Goldberg’s music starts to play. Steiner abandons the match, but wait- it’s not Goldberg at all, it’s Tank Abbott, pulling off a beard Goldberg could only dream of. Rick Steiner attacks his brother from behind, and R and B security all go after Scott. The Goldberg monster truck pulls into the arena, which is a very fun sentence, and Steiner throws Rick and Abbott onto the hood and watches it drive away. During the commotion, Mike Awesome gets in the ambulance and drives away, giving Steiner the win, I guess. No rules are ever mentioned here. If I think about these gimmicks too long I think I’ll just lose brain cells.
Tags
let's pretend it's any year other than 2020recapwcwwrestlingwrestling recap