While it wasn’t quite the absurdity of last year’s red light spectacular, Hell in a Cell had it’s fair share of highs and lows on Sunday night. For every fantastic cell match, there seemed to be an 8 minute bout that served as little more than a reminder that you had more wine in the fridge. 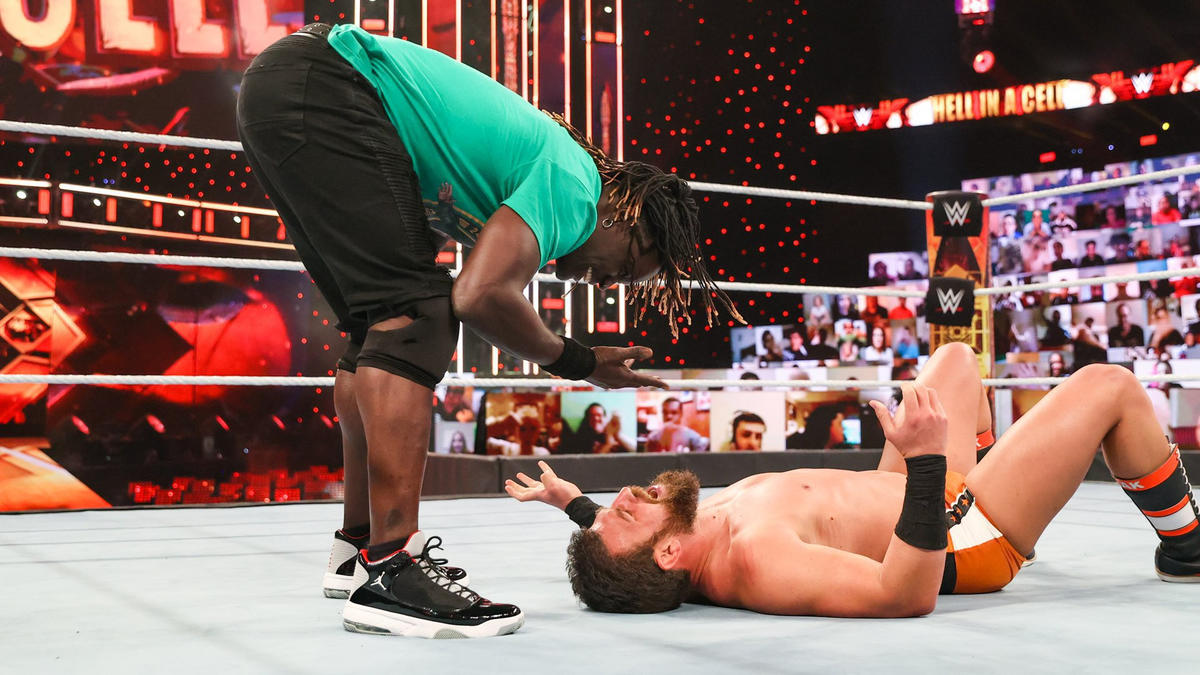 This was announced on social media a few hours before the show began. I’m old enough to recall when the 24/7 championship was a gimmick invented to operate outside of scheduled matches, but we’re not so concerned about that anymore. While I’d rather see him actually wrestle, Gulak’s got solid comedy chops, and played up interacting with invisible Little Jimmy. This involved Gulak high-fiving and then punting Truth’s BFF, which caused the champ to snap and take him down. He went for an early pinning attempt, but Gulak kicked out. R-Truth then honored his long time hero, John Cena, by hitting a spinning slide slam to get the win. While Truth has managed to stay entertaining in everything he does, this short match felt like the time could have gone to another feud. 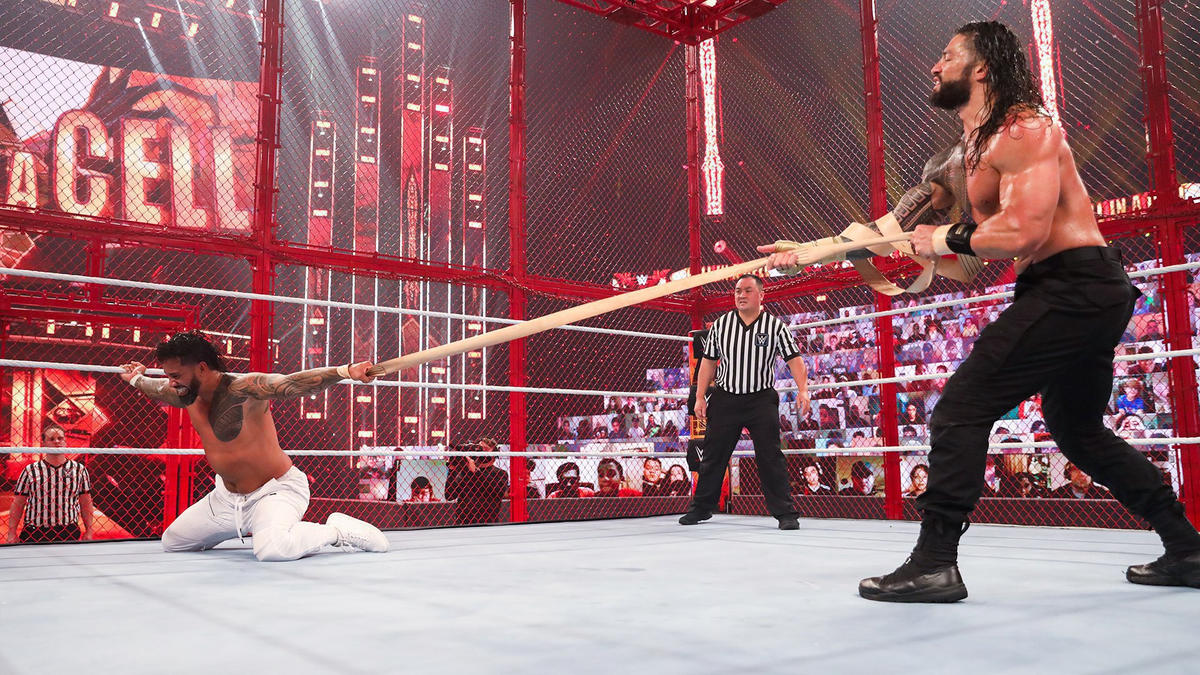 In a surprising move, Reigns and Uso kicked off the show proper. This was a hell of a match that topped their bout at Clash of Champions in physicality and emotion. The two traded sharp punches and hits with a leather strap, until Jey wrapped it around Reigns’ neck and attempted to choke his cousin out. Some may call that attempted murder on live pay per view, but that’s just another day for this family. Reigns managed to not pass out, possibly because he has the strongest neck of anyone I’ve ever seen. When Uso was unable to finish the job with a chair, Reigns hit him with a Superman Punch. He then got Jey in a submission, but Uso refused to quit. Roman hit a drive by on the apron and sent the steps straight into Uso’s head. The ref tried to stop things, but Reigns was a stickler for the rules, and insisted the match go on until Jey audibly quit. Jimmy once again came out to try and save his brother, but Reigns faked sympathy to get him in a guillotine as well. Jey finally quit to save his brother, and Roman was celebrated on the ramp by his father Sika and uncle Afa. The emotional weight of this match really sold it, especially hearing the full exchange between Reigns and Jimmy, when Roman pretended to realize he’d gone too far in punishing Jey. Reigns is fantastic in his role here, and I’m looking forward to seeing where he goes from here, now that he’s effectively put Uso “in his place.” 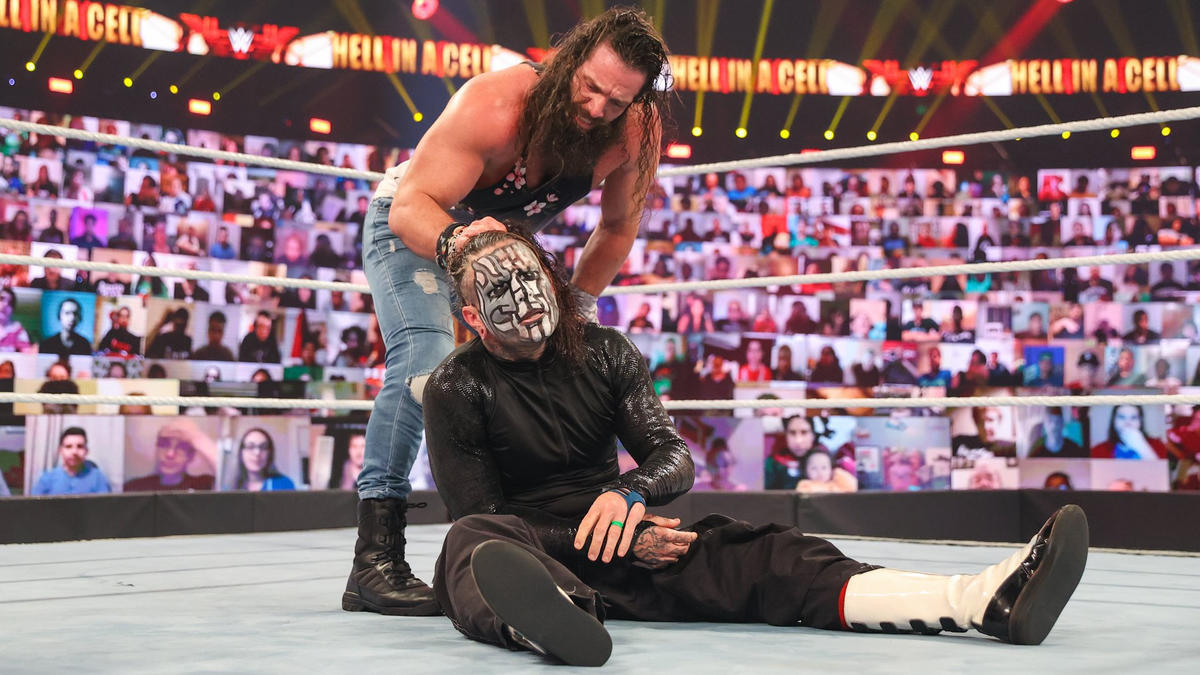 Elias serenaded the virtual crowd before the match, and I gotta admit that out of every kind of wrestler, a musician gimmick needs an audience to play off of most of all. Elias must have been overcome with the power of music because he came out strong, hitting Hardy with a powerbomb for an early pin. Jeff fires back with a Twist of Fate and went for the Swanton Bomb, but Elias got out of the way. Elias went for the guitar, but Hardy snatched it and nailed the drifter right across the back to cause a DQ. I like both these guys, and they’re certainly capable of putting on a better show together, but this wasn’t much of anything. Jeff’s makeup probably took longer than this match. 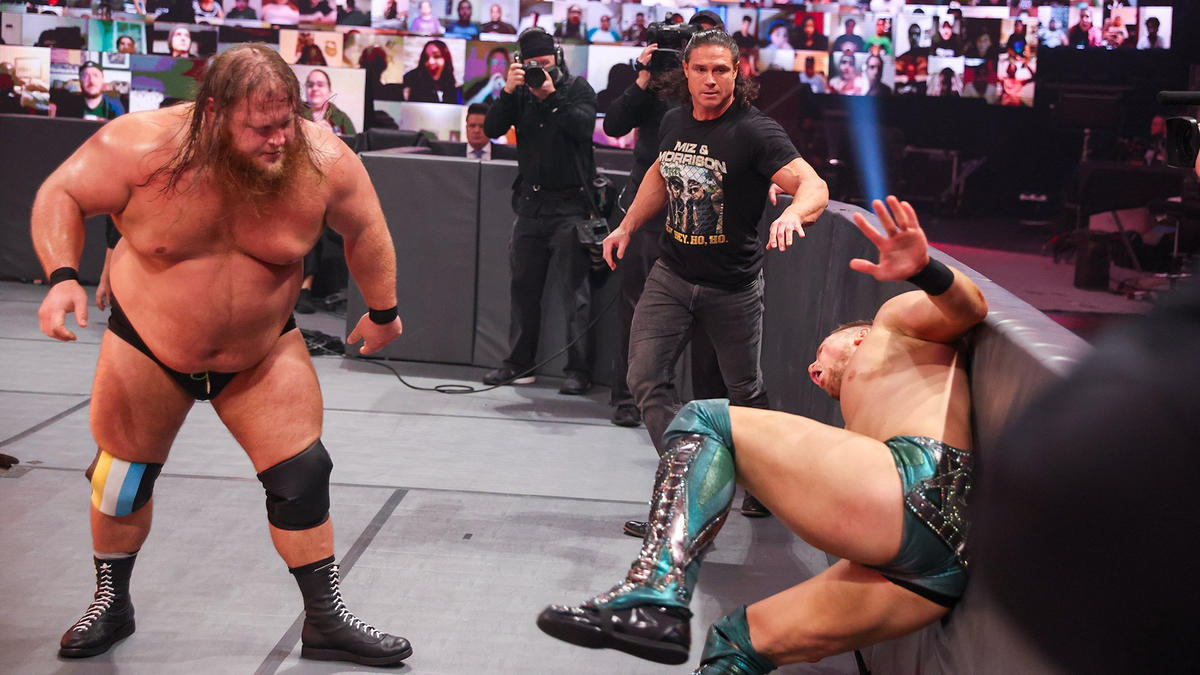 The Miz def Otis (Money in the Bank Contract Match)

Miz and Otis were accompanied by John Morrison and Tucker, respectively, and you already know that that’s going to come into play. The match itself here was fine; we’ve seen it 8 times on SmackDown in the past month, but it was fine. After the ref finally noticed Morrison intervening with the briefcase he was thrown from ringside, leaving Miz at a disadvantage. In a somewhat surprising twist, Tucker picked up where Morrison left off and nailed Otis with the briefcase, allowing Miz to pick up the win and become the new Mr. Money in the Bank. Truthfully, I can’t see heel Tucker having more than a mid-level feud against Ricochet for a few weeks, but Miz gaining the MitB briefcase is very promising. It’s been a hot minute since we’ve seen Miz in singles contention, but this opens up a lot of options for him. 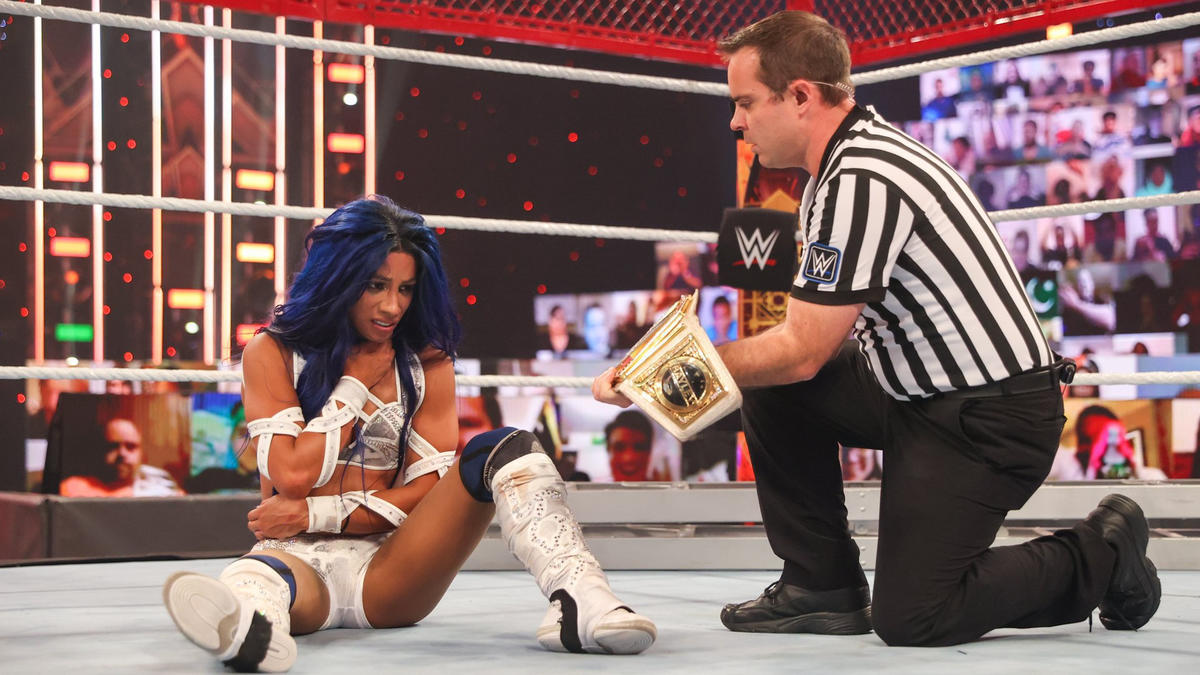 To the surprise of absolutely no one, this was incredible. Tremendous work from both women, and a well-earned victory for Sasha. Banks went for an early submission, and Bayley bit down on her hand to break it. Banks threw the champ into the cage walls, nailing her with the double knees. Both women used kendo sticks, with Bayley setting up two in the corner and dropping Banks onto them. Sasha even pulled out a fire extinguisher at one point, dousing Bayley with mild chemicals. They traded insults and kendo shots, made all the worse without crowd noise to drown them out. Bayley brought a chair into the mix, and when that didn’t do the trick, introduced a ladder. After each woman was viciously thrown into and/or through the ladder, they miraculously still kept things going. Bayley tried to go for a Bayley to belly, but Sasha escaped. She got Bayley’s head in the chair and locked in a Banks Statement. Bayley tapped, and Sasha ended the year long reign of the role model. Fantastic, brutal stuff from both wrestlers here. I eagerly await their next match, although there’s plenty of other challengers I’d love to see Sasha face as well (Bianca!!!) 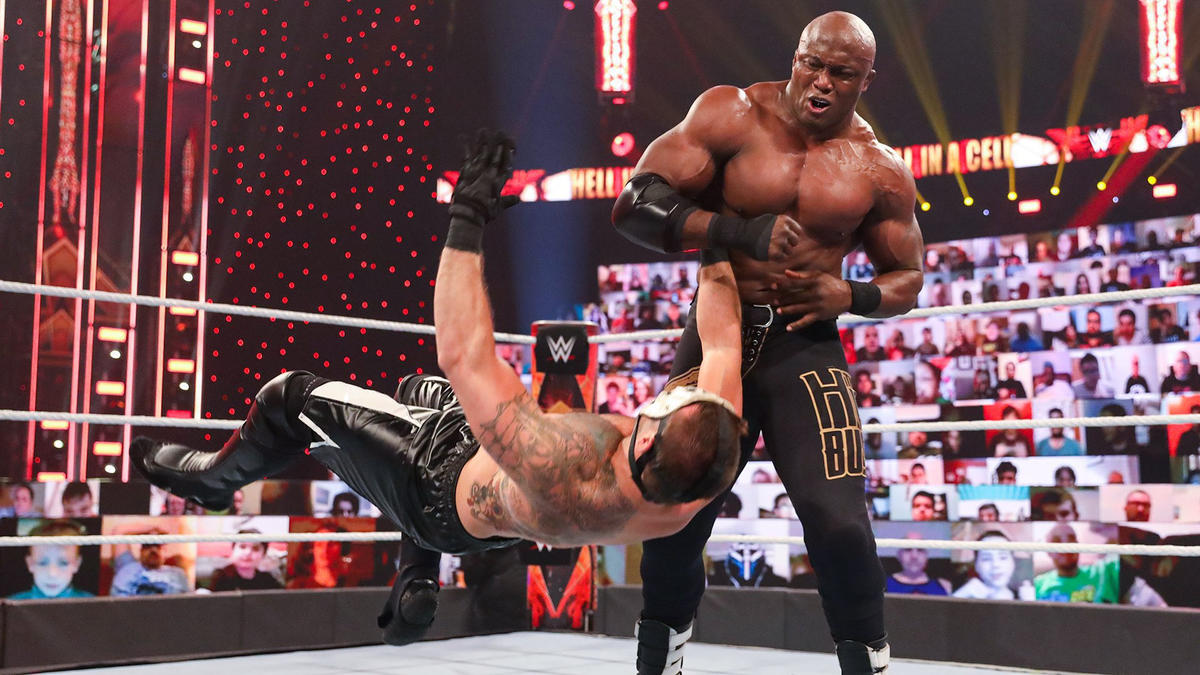 Earlier in the night, Mustafa Ali challenged a member of The Hurt Business to face a member of Retribution. We could have had Alexander vs Ali, but I don’t deserve good things in life. Instead, we had Lashley defending his US title against our boy Slapjack, formerly known as Shane Thorne. Retribution started off with the edge as Slapjack distracted Lashley to get the upper hand, but the champion game back quickly. After a short back and forth he got The Hurt Lock in and Slapjack tapped. Retribution then swarmed Lashley, but he managed to fight them all off even before The Hurt Business came to back him up. Not a great look for anarchy. 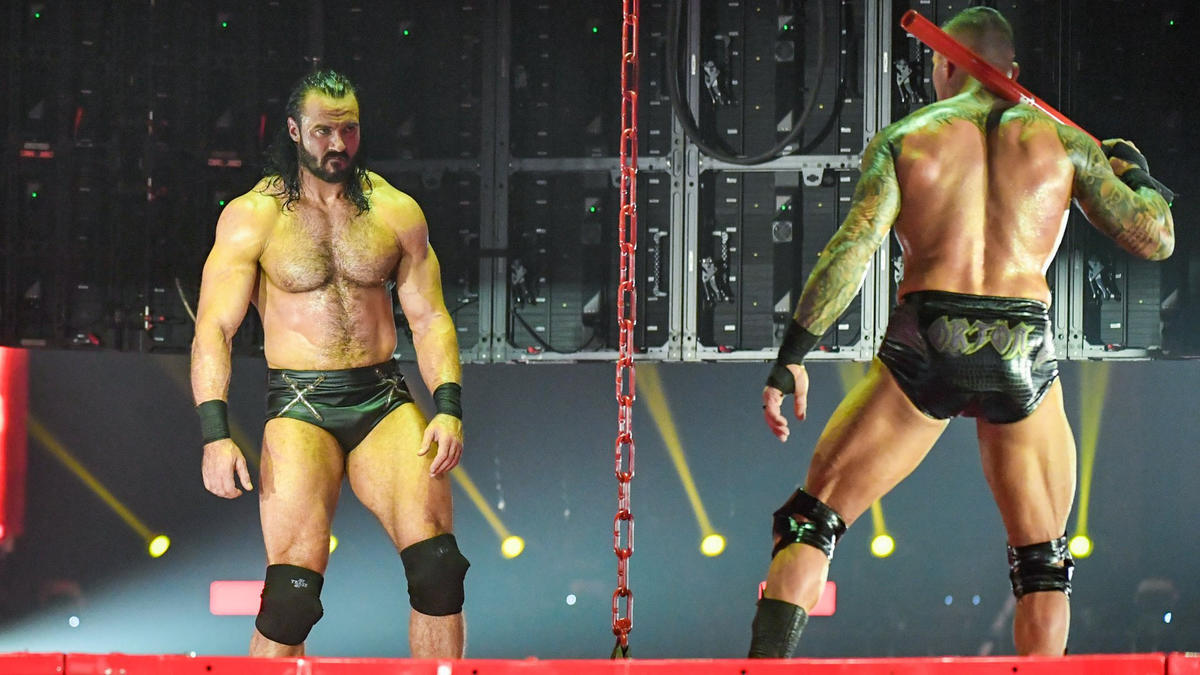 Orton tried to start out by sneak attacking McIntyre from behind, but Drew got the jump on him anyway. He pulled Randy into the cage to officially start hell. McIntyre controlled for a little while, running Orton into the cage walls to wear him down. This was as physical as their last Ambulance Match, with both men taking a lot of damage. Randy was crafty as he used a thumb to the eye to get back in it, and later crotched McIntyre on the ropes for a deliberate double low blow. Randy used bolt cutters to open the cell door, and the two fought on the outside and up the entrance ramp. Orton got on top of the cell, and found a pipe to keep Drew at bay. He descended from the cell and both men fought while clinging to the side. Orton got the upper hand and shoved McIntyre off, watching him land through the announce table. Somehow, McIntyre was able to make it back in the cell and hit a Claymore, but as he was going for a second, Orton countered with an RKO to score his 14th WWE championship reign. This was a good effort from both guys, and held my interest more than their previous two matches. Still, it managed to be the least interesting cell match of the night, but that was a very tall task after Sasha/Bayley.

The great matches here were exceptionally great, but they were bogged down by some very boring filler