SummerSlam has come and gone, which means it’s time for Pumpkin Cold Brew and your favorite fall craft beers. NXT sent the season off with TakeOver 36, an event that managed to be better than its main roster counterpart, although that wasn’t a very tall task. Headlined by Samoa Joe’s third title win and an NXT UK Championship match, TakeOver delivered a solid night of wrestling, and they did it in just under 3 hours. 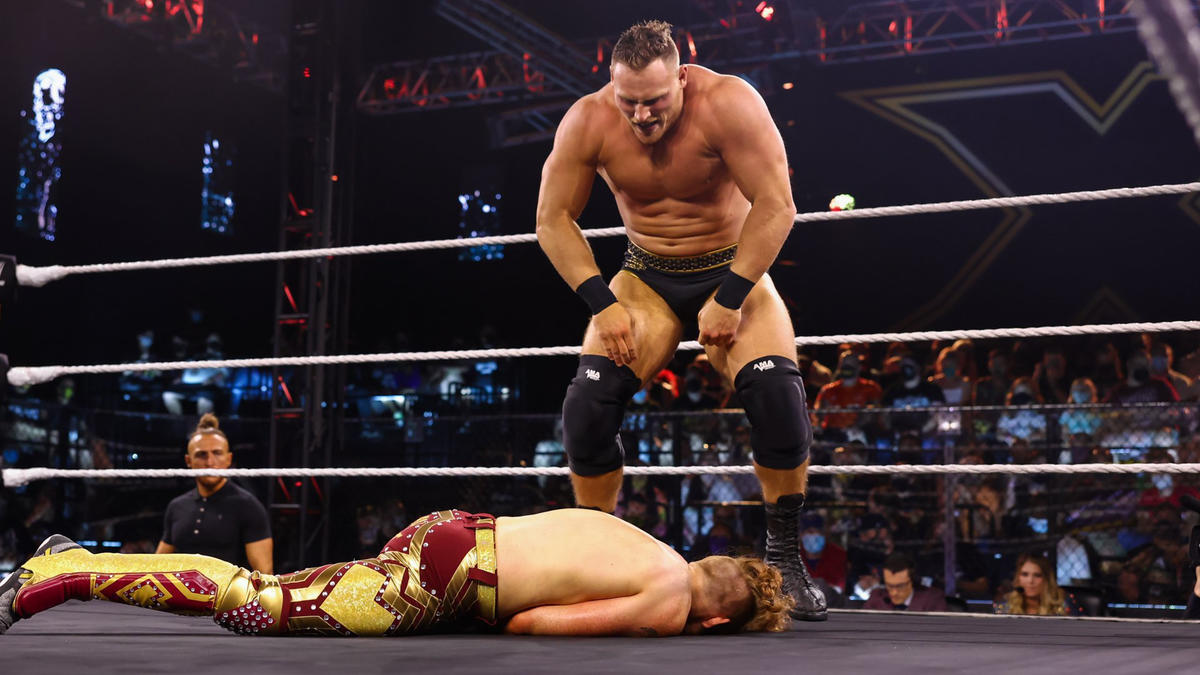 Trey Baxter having survived the recent indie guy cuts is a victory in and of itself. Holland was accompanied by countryman Pete Dunne, so at least there was one person in the crowd who understood a thing this man was yelling. Baxter tried to come out hot with a drop kick, but Holland easily overpowered him with a slam. It didn’t take much longer for him to score the win off a headbutt to the back of Baxter’s neck. The buff Brit called out Timothy Thatcher as Dunne earned his paycheck by standing still and saying nothing. This was a squash showcase for Holland, but at least there were those ten second where we got to go “wow, Blake Christian is on a TakeOver!” 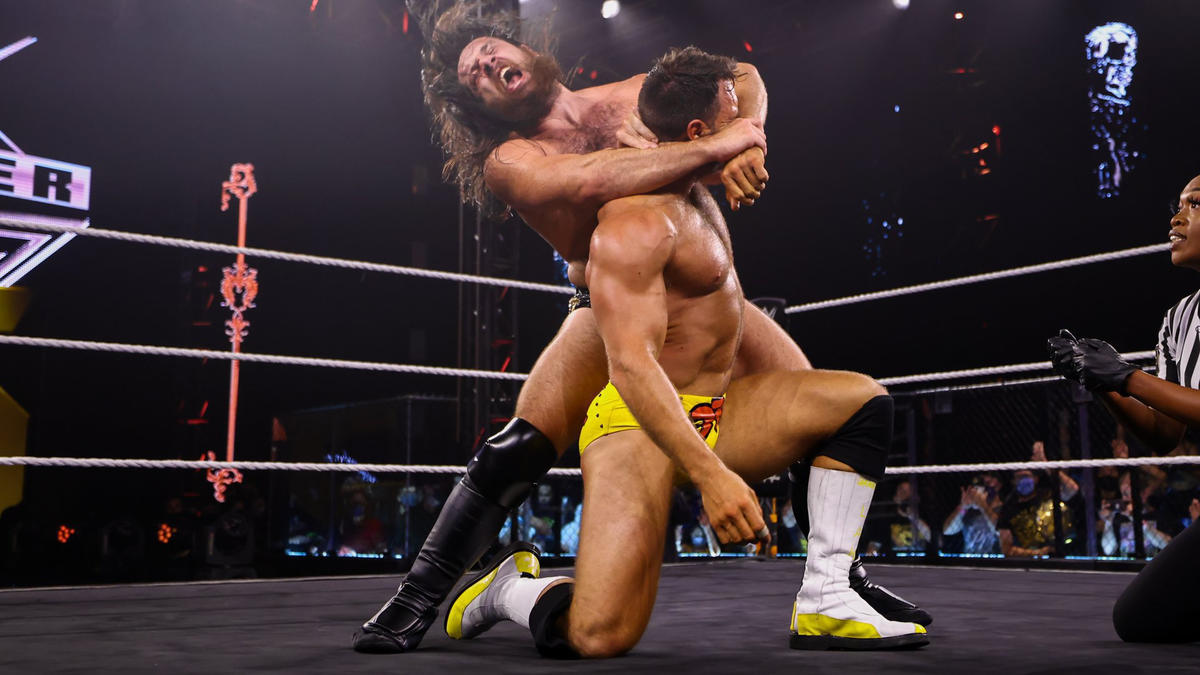 These two men were fighting over who has to take care of an aging Ted DiBisase. If Grimes lost, DiBiase would have to become Knight’s butler, a job Grimes had been floundering in for a month now. Grimes tried for the Million Dollar Dream right away, but Knight had seen a DiBiase match before and slipped free. Ted helped launch Grimes into Knight on the outside, in control until LA knocked him off the turnbuckle. Knight got a bulldog and followed it with a slam, but Grimes barely kicked out to keep the hope for Ted’s butler-less future alive. Grimes fired back with a Spanish Fly off a rebound, only to face the same result. A moderately concern DiBiase paced at ringside as Knight split open Grimes’ nose. Cameron countered the BFT to get Knight in the Million Dollar Dream, refusing to let go even when LA flipped into a pin. Knight finally broke it by chucking Grimes into the corner, then went for the title. The ref, who had seen one or two matches previously, didn’t allow this, leading to a superkick from Grimes and the Million Dollar Dream by DiBiase on the outside. Cameron finished things off with the Cave In, falling into the cover to save the rights of millionaires everywhere.

This was a fitting cap to the Knight-Grimes saga; a fun opener with a solid result. I’m surprised how long this feud managed to run, but it’ll be interesting to see where both Knight and Grimes go next. 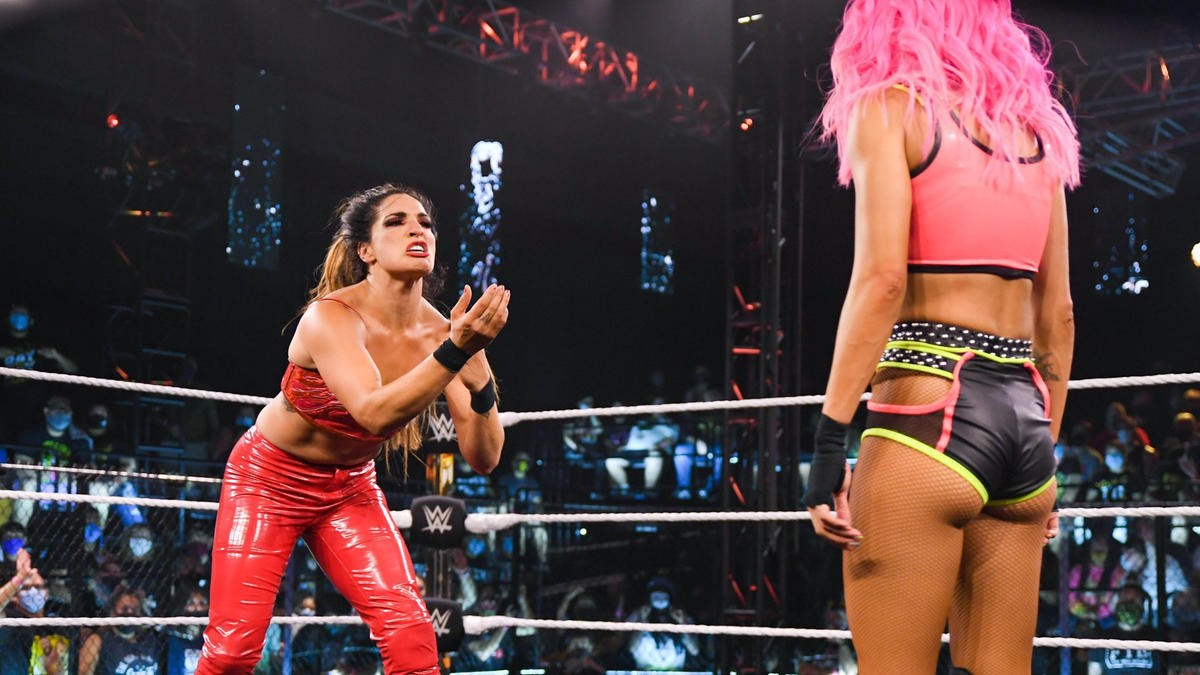 This was all Raquel’s strength against Dakota’s smarts; the only two traits wrestlers can possess in this world. The champ was able to pull her former friend into the ring literally by her hair, but Kai evaded attack by escaping to the outside again. Gonzalez caught a crossbody and tossed Dakota onto the turnbuckle, before launching her halfway across the ring. Kai hit a huge kick in the corner, but Raquel rolled to the outside. Gonzalez came back with some knee strikes of her own, and the kiwi barely kicked out of a splash. Gonzalez countered the Scorpion Kick into a powerbomb for another near fall, before sending Dakota bouncing off the ropes onto the entrance ramp. Kai earned her own close call off a backstabber, but it was Gonzalez who caught another Yakuza Kick and turned it into a Chingona Bomb for the victory. While I would have been more than okay with a title change, this was a good match between two women who worked very well together.

Post-match, Kay Lee Ray came out to stare down Gonzalez, which probably means there’s another NXT UK vs NXT America bout coming up. I just can’t escape these Europeans. 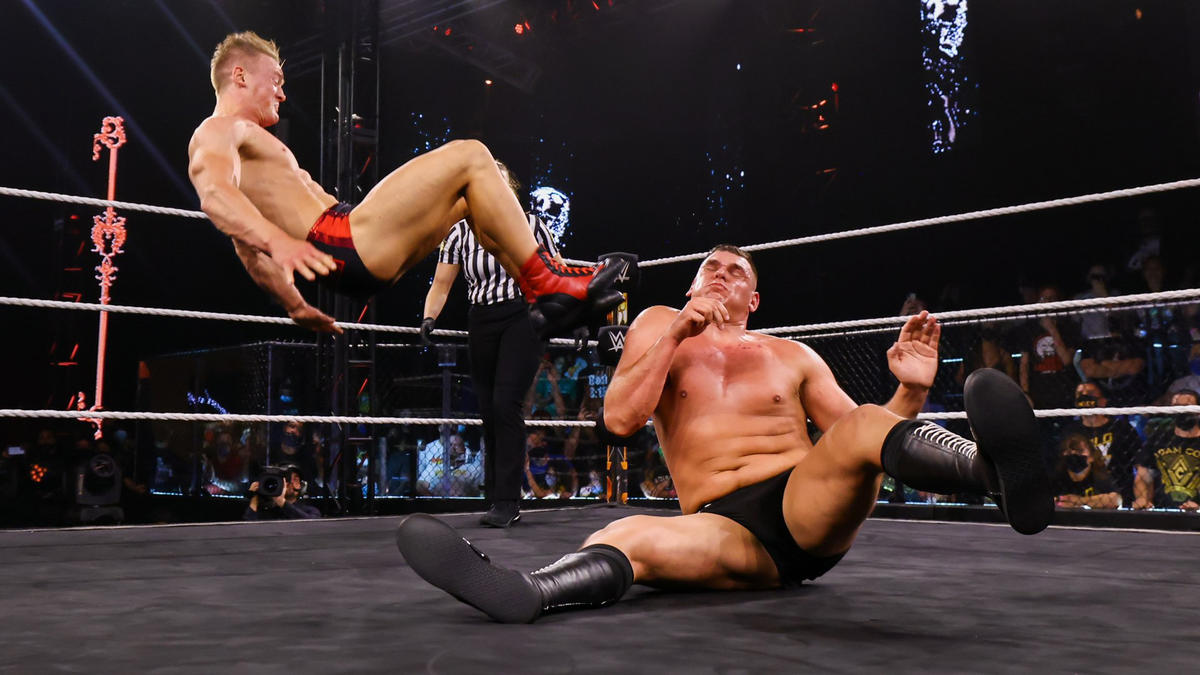 If I’m being completely honest, I can’t remember the last Walter match I watched. How fast the night changes. Having not kept up with NXT UK or my Walter knowledge, this was leagues ahead than whatever I thought it was going to be. I’m not very familiar with Dragunov, but the Russian killed it here, matching Walter for holds at every turn. The Ring General tried to power out of a headlock, but Ilja wouldn’t let go. He caught a chop and tried to get Walter back on the mat, but was forced to break the hold on the ropes. Walter stayed on top, killing Dragunov’s comeback hopes with some killer clotheslines. Ilja’s chest looked like an abstract painting as he suplexed Walter, capping things off with the Torpedo Moscow. It still wasn’t enough to put down the man with the biggest knees in the game. Dragunov barely kicked out of a splash, then avoided the sleeper hold to lock in one of his own, eventually forcing the champ to tap. An emotional Dragunov sold the UK title like a million bucks. Or at least like it was the Million Dollar Championship. 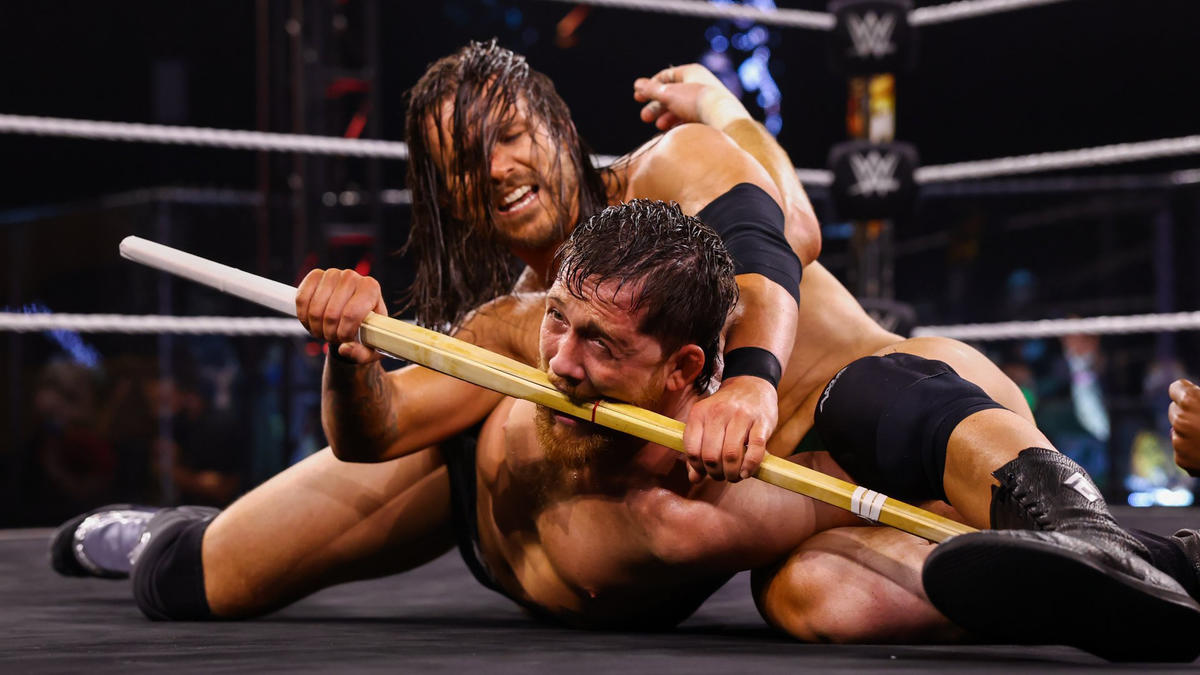 Both guys went for the same kick at the bell—it’s like they were best friends for years! O’Reilly got control on the outside, playing ball with Adam’s torso as he bounced between the ring and the barricade. Kyle went for a submission in the ring, but Adam stayed in it with a superkick. Cole went for Panama Sunrise, but O’Reilly reversed into a cover and scored the first fall. The crowd instantly chanted for tables, because wrestling fans have zero patience and only two interests. Kyle gave us the obligatory trash can spot before getting rammed into the commentary table. Cole went for a chair to realign some of Kyle’s ribs, then brought out the Kendo Stick. Some trash talk from Adam revved up the Canadian legend, and he sent Cole into the chair with a dragon screw. Both men brought out matching chains and slugged it out. Another chair was set up in the ring, and Cole chucked Kyle into it before hitting the Last Shot to even the score.

As the cage was being lowered and Kyle was having his broken body looked at, Adam jumped his buddy and hit a powerbomb on the outside. He shoved Kyle’s dead weight back in the ring and got back to work. O’Reilly came back from certain death and hit a diving knee, but couldn’t avoid a Panama Sunrise off the top rope. Kyle barely kicked out, only to find himself handcuffed to the cage wall as Adam went buck wild. Kyle caught a strike to lock in a knee bar with, and Cole tapped.

This was fine, in my book. It certainly wasn’t a career moment for either man, but it ended the story and sent Cole onto… Other things. 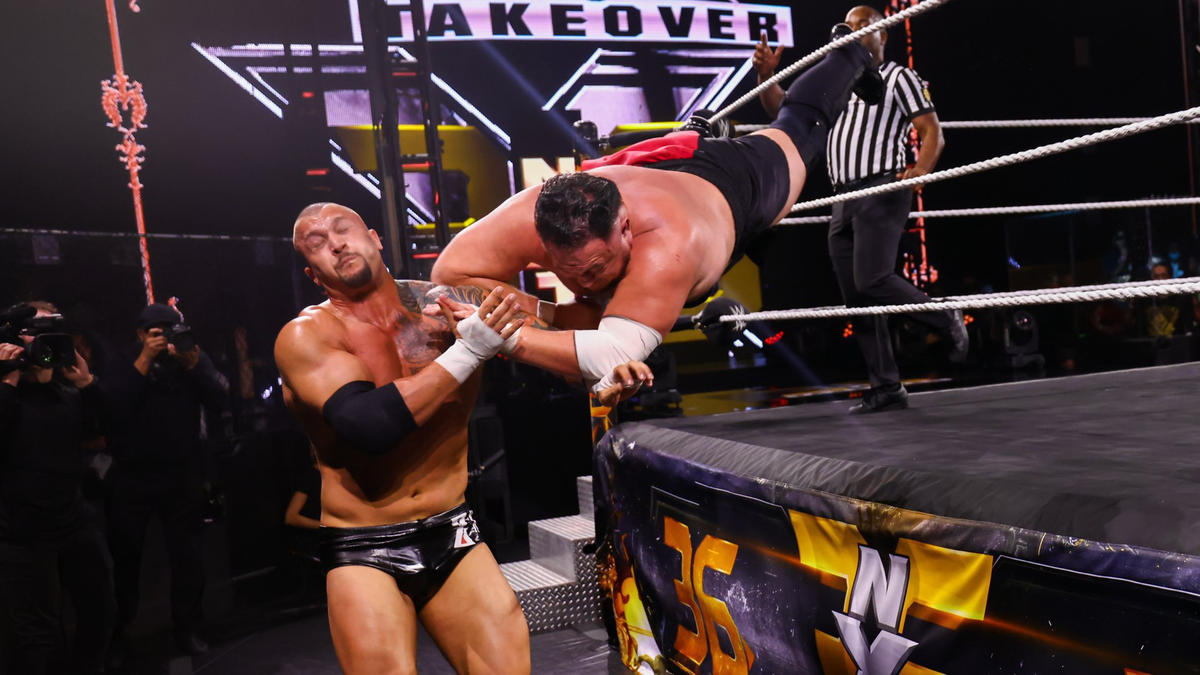 Where on earth is Scarlett? Is she okay? I can’t imagine this is a conscious creative decision, given that without her Kross looks like a deer in the black and white headlights. Joe looked great here, getting Kross on the mat and going for the Coquina Clutch early. Kross got the Doomsday suplex, but a diving Joe shot him into the barricade. Kross told the ref to go fuck himself in a gesture I didn’t know you could do on Peacock, but all the nasty arm movements couldn’t save him from a crossface. Joe went for the Coquina Clutch again, but Kross turned it into the Kross Jacket. Somebody’s gonna go to sleep real soon, myself included. Karrion wound up the clock and wanted another suplex, but got slammed instead. A muscle buster from Joe kept Kross down for three, making him a three time NXT champ and Regal’s newest problem employee.

I love Samoa Joe, and it seemed fitting for him to end Kross’ title run, but whatever happened here didn’t quite click like it needed to. Let’s hope it’s not a sign of things to come in his third NXT reign.

At All Out, The Young Bucks Embraced Being Inevitable