Embracing the new lifted restrictions, NXT rolled right on into your own house this weekend. The brand has been stuck in a bit of a rough patch recently, and this show was much of the same bland, middle of the road fare. Nothing terrible, but nothing to write home about. Hosted by Todd Pettengill and boosted by Dok Hendrix (Michael “P.S.” Hayes) on the intro package, NXT’s attempt to blend the In Your Houses of yesteryears with today’s NXT vibe fell about as flat as the in house reception for Naomi Fox’s “Star Spangled Banner.” 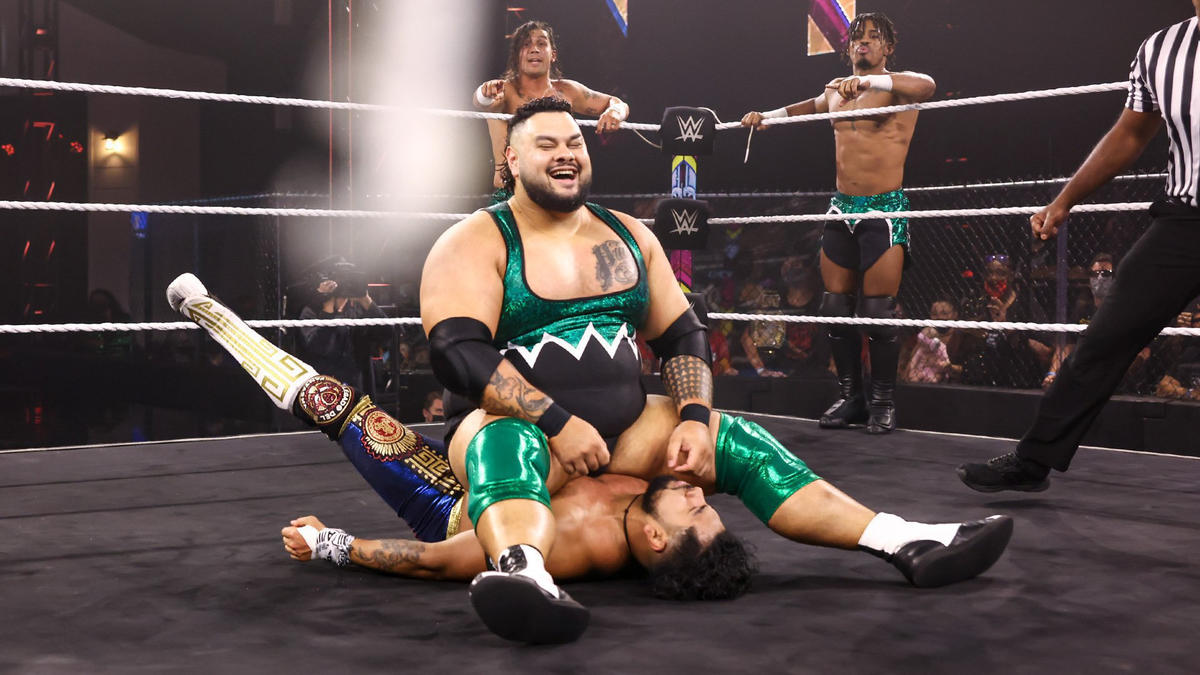 After many weeks of back and forth, Bronson Reed and a couple of rag tag must see kids offered one final chance for Legado del Fantasma in this six man tag. Several quick tags started us off, but once the colossus came in, Escobar backed off and tagged in Mendoza, who was effectively thrown to the wolves. A senton from Reed earned a very close count on Joaquin, but Legado regained their footing with a series of dives to the outside. Not to be outdone, Reed hit a suicide dive onto everyone, including his friends. Escobar took advantage and sent MSK into the barricade, then took down Lee with a huricanrana.

Legado isolated Lee in their corner, until he escaped Wilde to tag in Reed again. Bronson took care of Wilde and Mendoza with a dual Samoan Drop, while Escobar looked on with very mild concern. Mendoza chopped at Reed’s leg just before Santos got the tag; a huge Michinoku Driver to Reed wiped the champ out, but MSK broke things up. Another Legado double team on Carter, broken up by Lee diving over the ropes. Having had enough, Escobar simply picked up the NA title on the outside, only for Reed to run him straight through the barricade. MSK’s double team finisher to Mendoza, followed up with a Tsunami from Reed, won things for the faces.

A solid opener from all six men, this was a fun clash with the right result. I like all of these guys enough that I almost don’t mind we’ve seen variations on this match every week for a month and a half. 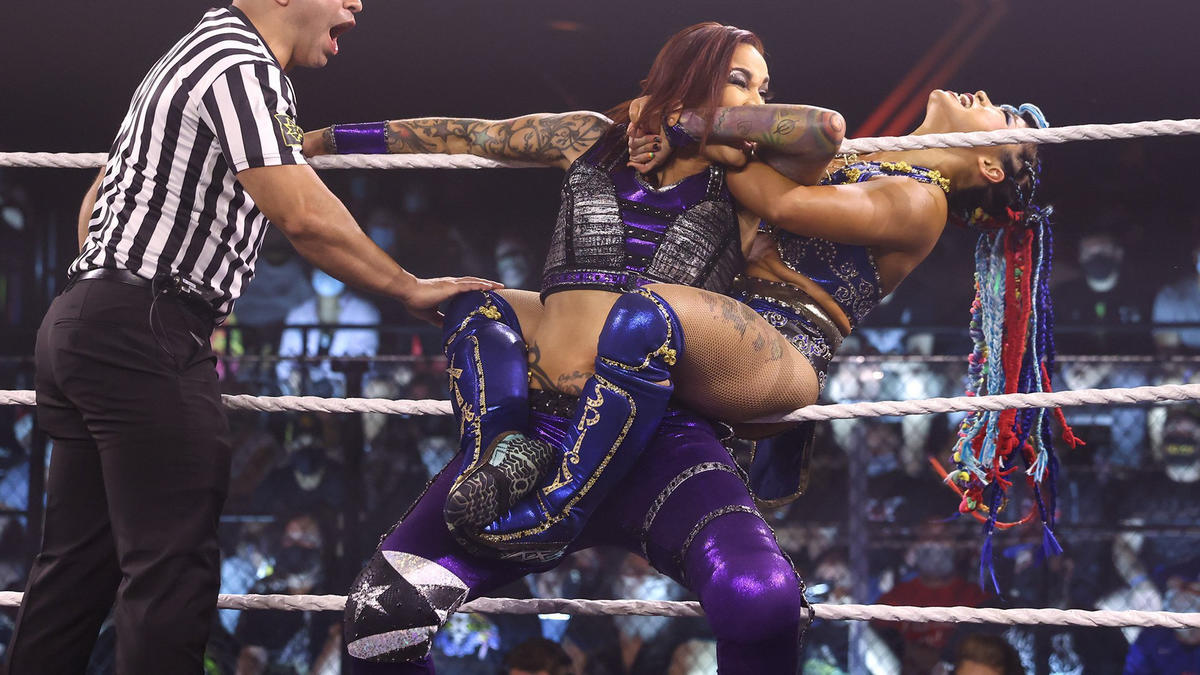 Four years ago, Mercedes Martinez defeated Xia Li at the Mae Young Classic, which makes this some icy cold beef to be fighting about. Now Li is battle hardened and working for her undead mentor, so she’s going to get some sweet revenge. Li kept control from the bell, targeting Martinez’s midsection and ramming her into the ring post on the outside. She sent her into the corner and followed up with a dropkick, but Mercedes suckered her in on the outside and sent her into the apron. A huge knee knocked Li down, and Boa helped her to the outside. Martinez very gently pushed him aside and got a back body drop on a charging Li, but back in the ring it was Xia who got the upper hand with a roundhouse kick, scoring the win. Post match, Li asked Boa for a chair and tried to go swinging, but Martinez knocked her down. She instead took the chair to both Boa and Lia, but Mei Ying took a little offense. Martinez called her a bitch, so she marched down the ramp. Mercedes tried to use the chair, but Ying barely cared as she got her in a chokehold and sent her over the edge. Tian Sha looked over a decimated Martinez together, standing strong to end things.

This was fine. I like that they’re building up Li, and it’s nice to give Ying something to do other than sit in that uncomfortable looking chair. I’m sure I’m biased, but she had more presence in that smoke than I’ve ever seen from Kross. 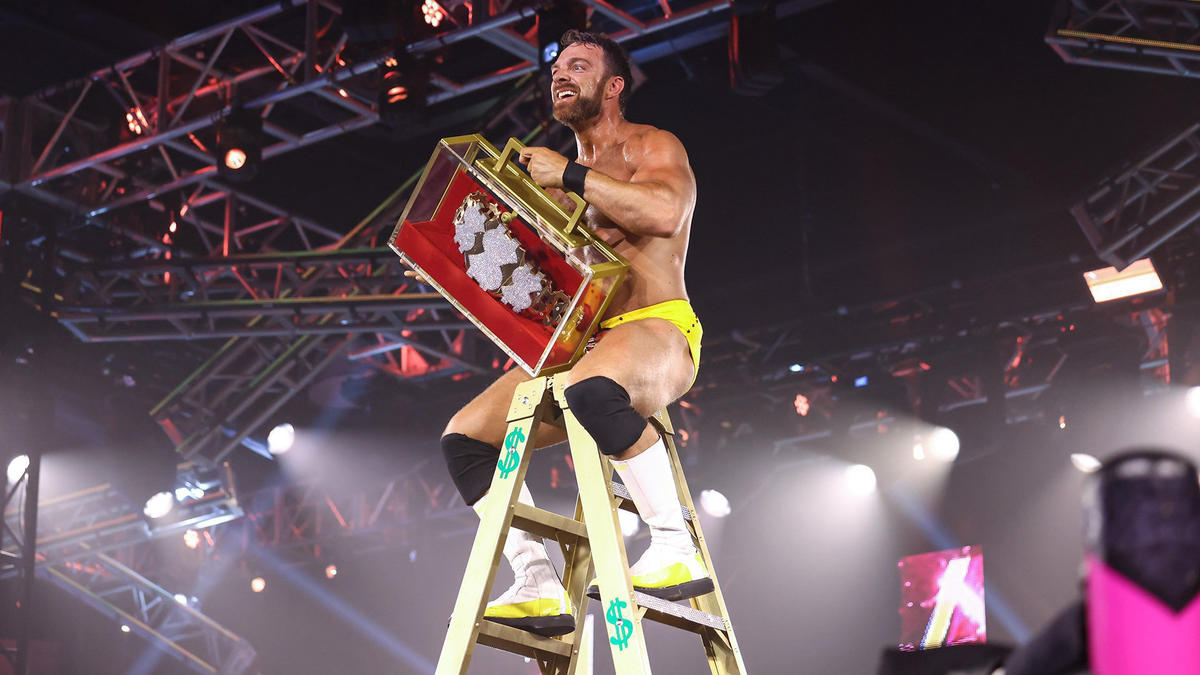 The average step ladder costs about $80, so I don’t even want to do the math on how much Home Depot made this weekend. Knight came out hot here, dropping Grimes with a clothesline. The grits connoisseur landed a huricanrana to send Knight to the outside, where LA grabbed the first ladder. They fought with individual ladders, but it was a kick to the face that pushed Knight outside again. Los Angeles struggled to get up while Grimes went for another ladder, until Knight sent him into the plexiglass. Ladder Affianado posed for the crowd and bounced Grimes off the steps right in front of DiBiase. Lil Actor set up a ladder in the corner, but it was Grimes who suplexed him into it. Loose Acquaintance promised to take Grimes to the moon, but Cameron turned things around and sent him face first into the ladder.

Grimes tossed Knight into another ladder with a body drop, but declared he wanted the gold ladder to get the championship. There is truly no one in the world dumber than a wrestler in a ladder match. He climbed as slowly as he could, but Knight met him at the top. Grimes shoved Loud Annoyance off the ladder, but Knight pushed the whole thing over in retribution. A Spanish Fly from Grimes didn’t even warrant a cover (how far we’ve come) and it was Knight who got to his feet first. Grimes fled up a ladder to escape, but Knight knocked it over, so he jumped to a light post. A huge dive took out Legal Action again, and Grimes ascended the gold ladder. He was fingertips away and suffering from difficulties with depth perception, but Knight tipped the ladder to send him tumbling. Least Agreeable scaled the rungs and grabbed the title, becoming only the third worst person I know from Hagerstown, MD. This was fun, if a bit long. Knight is the right man to win a moderately meaningless title that we haven’t seen in over a decade. 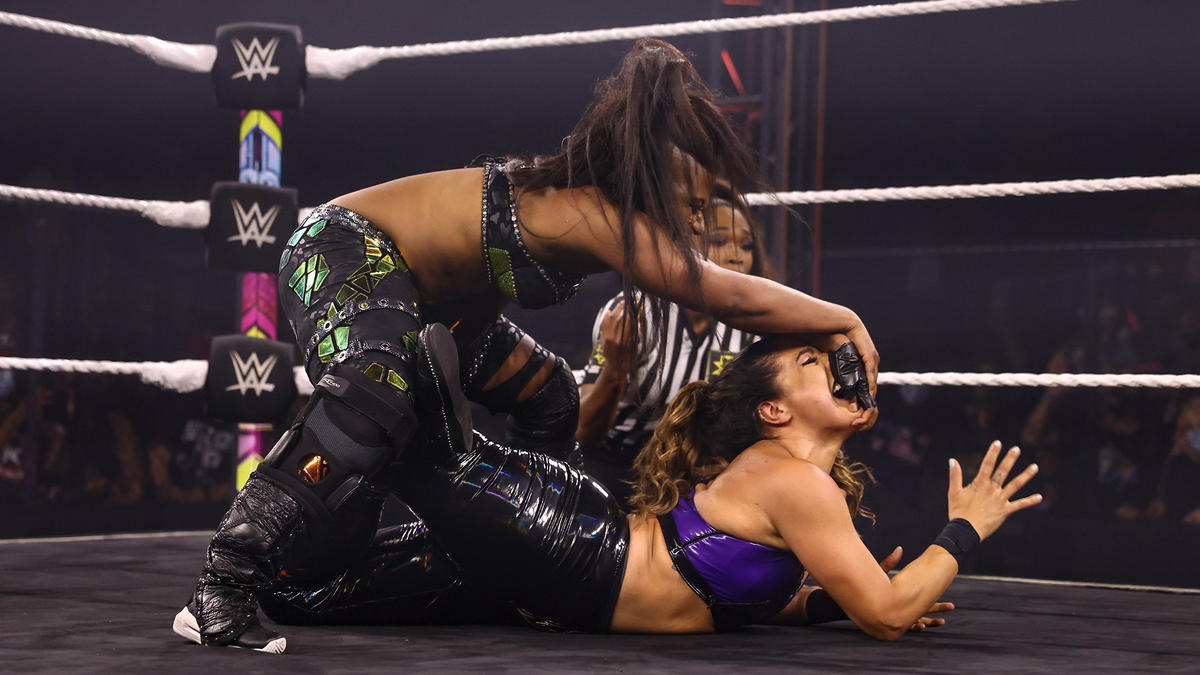 Moon went right after Gonzalez with a drop kick at the bell, but got planted with a powerbomb. Kai tried to interfere early on, letting Raquel knock her challenger into the barricade. Gonzalez dominated in the ring, catching Moon on a double knees attempt. A couple near falls and Ember continued to kick out; she made a comeback with a kick to fhe jaw and Code Red for a close count of her own. Moon locked in a submission and Kai pulled Gonzalez’s hands to the ropes to force a break. Ember kept rolling with a dive and a flatliner in the ring, but again Kai caused the distraction. Another comeback moment and Moon went up top to nail The Eclipse, but Kai just saved Gonzalez with her foot on the rope. Shotzi made her return to even the odds, beating down Dakota on the ramp. Ember sent Gonzalez into the corner and climbed up the turnbuckle for a DDT on the ramp, but struggled to get Raquel in the ring. Gonzalez recovered in time to land Snake Eyes in the corner and plant Ember with a huge powerbomb to retain.

Gonzalez was the right pick to go over here. Who challenges her next in a big question—NXT needs to take the time to build up much of their women’s division if anyone’s going to look capable of stepping up. 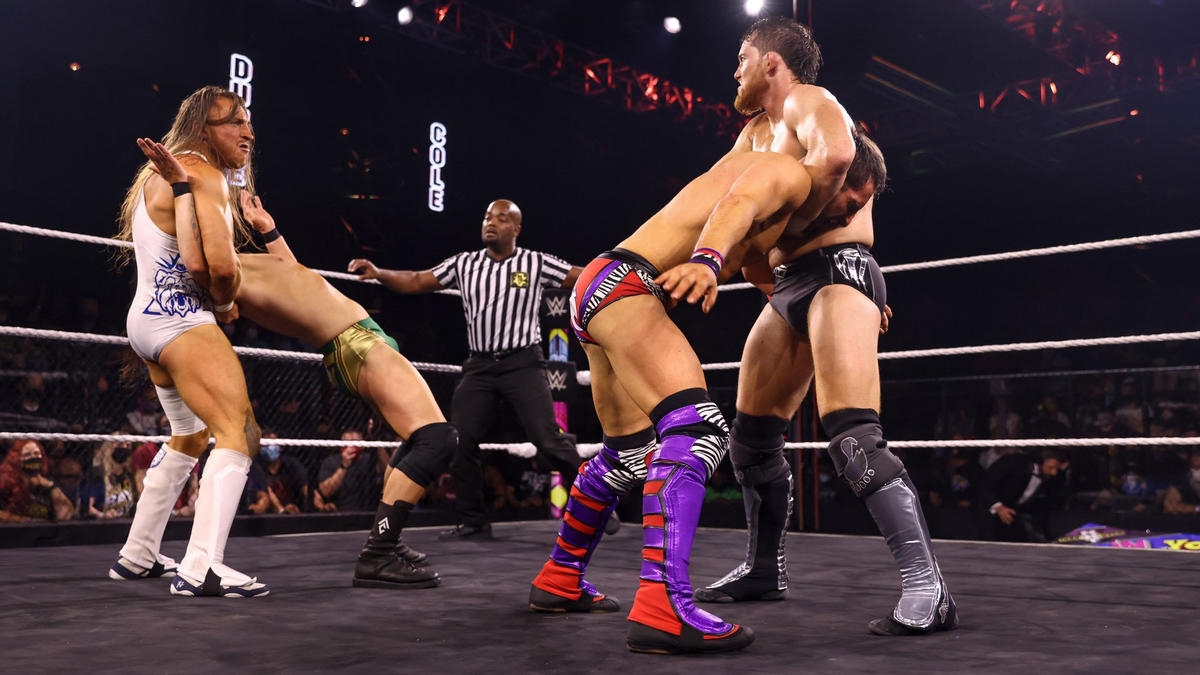 Everybody got their full entrance here, which felt like a good amount of my evening wasted. This was chaos right from the start;  We got exchanges between every possible combination of dudes, and Johnny still didn’t even lose his headband til like halfway through. Dunne and Gargano were in the ring, while O’Reilly went after Cole on the outside. White gear Dunne then squared up with Kross, who seems to only own that one gladiator inspired outfit, and it’s kind of mediocre. After suplexing Gargano, it was finally Cole who chopped down Kross with a dropkick to the knee. The three men on the outside went after Cole, who escaped into Kross’ meaty arms. Eventually, Cole and O’Reilly teamed up to take out Kross, because all UE beef aside, the true enemy is the guy still doing a b&w filter in 2021.

Dunne got a guillotine on Kyle, who reversed into a triangle until Johnny broke it up with a spear. Kross recovered to hit Saito Suplexes on everyone he could see, but Adam went in for superkicks. O’Reilly caught him for a heel hook, only to get stuck in a sleeper hold from Kross, fading just as Cole escaped and the bell rung for the champ to retain. Good, fast paced action that ran the expected 10 minutes overtime. A classic NXT main event.

After the match, William Regal was interviewed backstage, where he reminded us that all good things come to an end, and even he can only take so much of a Kross title reign. He talked about the chaos of NXT in recent weeks, cryptically suggesting that it was “time for a change.” It seems like we might be in the market for a new GM soon—Regal has been the only consistent authority figure in WWE over the past few years, and he fulfills the role very well. It’ll be interesting to see who, if anyone, is able to step out of his shadow.

Maybe this is a side effect of watching 8+ hours of wrestling every week, but I just felt like I'd seen all of this before.

I Choose to Believe Sly Cooper's Cameo in Ratchet and Clank: Rift Apart is Canon