NXT celebrated a day for friends and lovers the only way they know how: with lots of physical violence. We got exciting conclusions to both Dusty Cups, an eyesore of clashing colors from Johnny Gargano, and the Superkick heard round Canada. A little something for everyone. 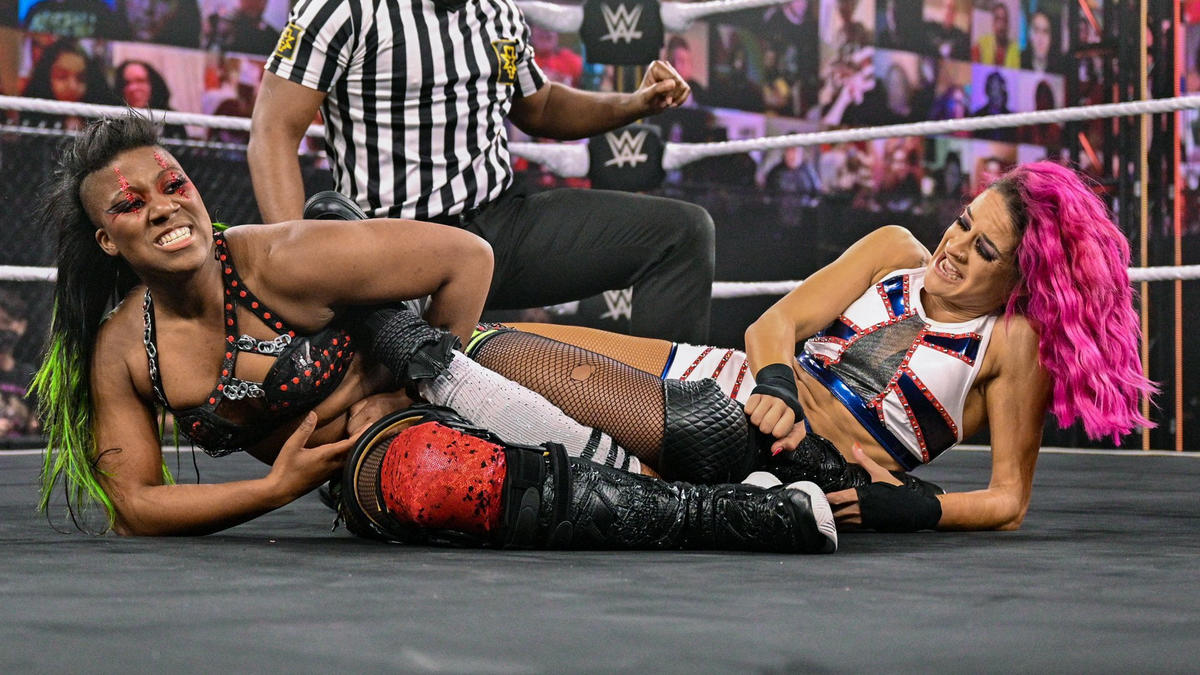 Gonzalez was in control early on, powering out of a stretch by Ember and handling the faces’ attempt at a double team. She ran Blackheart into the corner and brought in Kai to land a kick, but Shotzi kicked out. They came back with a cloverleaf and a huge splash from Moon onto Kai for a two count. They kept control of Dakota with a double team into a leg bar, as Gonzalez stewed on the apron. A jawbreaker finally gave her an opening and Gonzalez dropped Moon like a hot potato. A toss to Shotzi for good measure before she tried to pin Ember, who kicked out. Blackheart and Gonzalez fought to the outside, where the powerhouse slammed Shotzi into the plexiglass in front of 20% real fans. Back in the ring, Kai landed a drop kick to Moon’s back and a huge boot in the corner, but she couldn’t put the Shenom away. A miscue lead to Gonzalez dropping Dakota with a clothesline, and Moon took advantage. An Eclipse from the top laid out Raquel, but the ref was distracted by Kai and didn’t get the count. Blackheart rejoined the match to hit a missile drop kick on Gonzalez, but couldn’t keep her down. Shotzi went off on Kai in a flurry of neon hair, then nailed Sliced Bread on Gonzalez, but nothing could get the job done. All four ladies brawled on the outside, until Moon was dumped flat on the ramp. Finally, a huge powerbomb from Gonzalez onto Shotzi got the win, with both Kai and Gonzalez laying over Blackheart to keep her down. Gonzalez and Kai celebrated making history with confetti and a significant amount of clean up for some backstage techs to complete in  2 minutes.

This match started out a little weirdly off-beat, but very quickly improved as both teams gelled well. It ran a bit long for me, with more false finishes than I probably ever need to see, but that’s NXT for you. Kai and Gonzalez have really been huge factors in the women’s division; Gonzalez in particular has looked like a huge star recently. If they don’t capture the tag titles, I wouldn’t be surprised to see her go for the women’s championship very soon. 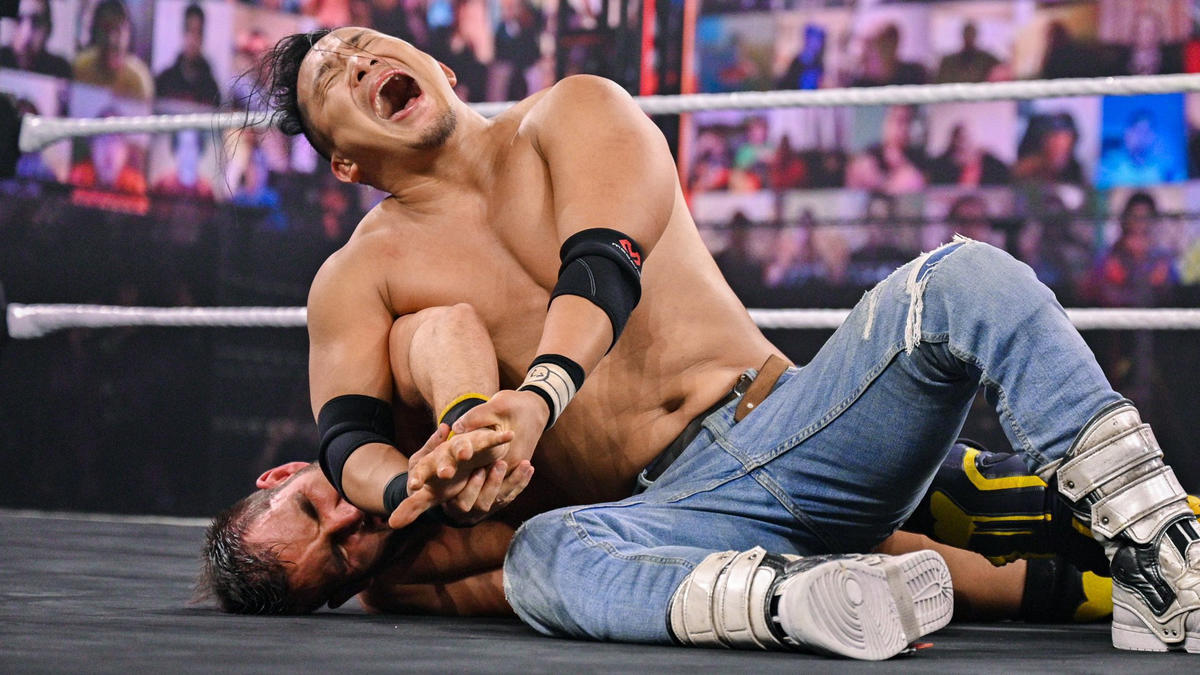 Austin Theory was chloroformed and grabbed by Dexter Lumis as The Way made their way to the ring, but nobody really cared. Gargano dismissed LeRae and Hartwell to go it alone in what looked like a jacket made of duct tape you could only buy in the year 2006. Kushida went right after Gargano’s arm to start, looking for the Hoverboard Lock multiple times. Johnny had a counter every time; he landed a suplex and immediately followed with the Gargano Escape. Kushida escaped to get the Hoverboard Lock again, but Johnny’s little toes just got to the ropes, forcing a break. He ran Kushida into the barricade on the outside, then tried to crawl up the ramp to flee. Kushida cut him off with a punt straight to the arm. He got Johnny in another submission, but Gargano dropped him neck first into the ropes to get away. One Final Beat on the outside, then once more in the ring, scored Gargano the hard fought win. Again, this ran much longer than it needed to in any capacity, but it was still very good work from Gargano and Kushida. It was somewhat surprising to see Gargano win clean, but he is Mr. TakeOver, even as a snotty little boy. 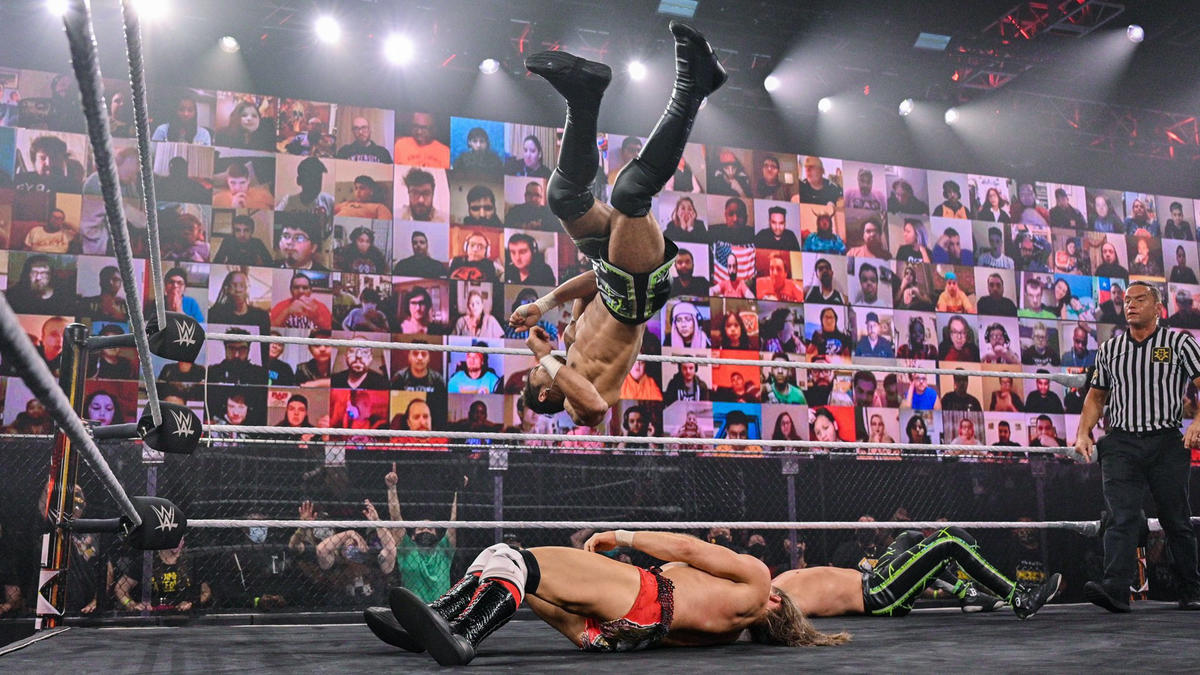 Gibson and Carter started out, with Liverpool’s #1 taking control and wrenching on Carter’s arm. Drake tagged in to keep grounding the high flyer, until Carter landed a springboard elbow and made the tag. Lee took out Gibson with a huricanrana, then got both GYV with a dive to the outside. Carter went for the same but missed Gibson, who nailed him with a clothesline. GYV took over, double teaming Carter to keep him down. He barely kicked out of a series of near falls, but was unable to tag Lee as Gibson pulled him off the apron. After fighting free from Drake, Carter finally made the tag and Lee cleared house. He dove over the ring post to wipe out GYV, then got a handspring kick to Gibson’s neck.

Carter rained punches on Gibson, finishing with a face buster, but couldn’t get the 3 count. Gibson countered the second attempt at a handspring kick from Lee with a knee to the face, then followed it up with Helter Skelter and a 450 from Drake. Lee barely kicked out, then got a near falls of his own with a sunset flip on Gibson. MSK sent Drake into Gibson to stun them both, then hit some wild flipping moves for a 2.9 count. GYV landed a Doomsday on Lee on the outside, then got Carter in the ring. But even a dual backstabber couldn’t put Carter away, so strong is the power of friendship and love on this Valentine’s. Lee returned to save him from Ticket to Mayhem, and hit a neckbreaker to score the win. Great tag wrestling, as expected, and a strong result for the newcomers. GYV are among the most solid tag teams in all of WWE right now; they deliver with anybody. Lee and Carter (I just got that’s a Rush Hour reference) hugged under even more confetti. Maybe next year we do the finals back to back and just help maintenance out for a minute. 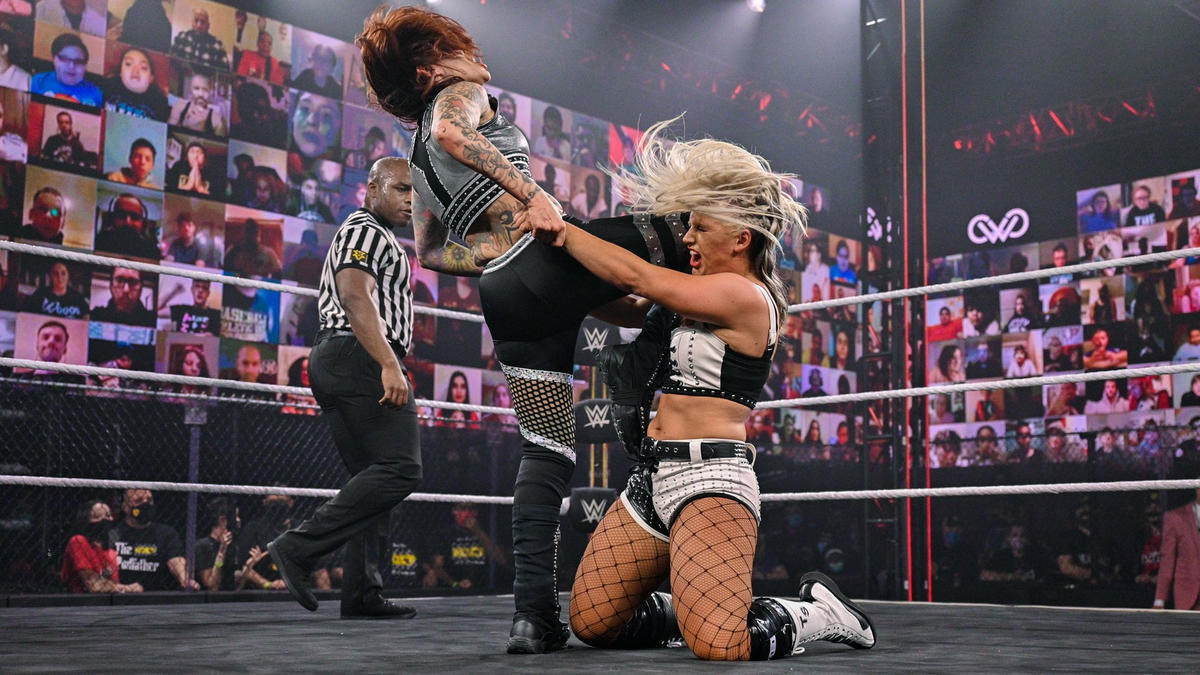 Wildly quick action here straight from the bell. Martinez went after Shirai right away, but the champ managed to send her to the outside. Storm and Shirai went back and forth in the middle, countering each other until Io landed a double stomp to her middle. Martinez dropped Storm on the outside and evaded a moonsault attempt, then sent Io over the barricade. In the ring, she wrapped Storm up in a submission, but Shirai broke it up with another stomp. She went for a cross face of her own on Toni, then found herself caught in a Dragon Sleeper by Martinez. A 619 from Shirai dropped Martinez, but Storm prevented the moonsault. Martinez ran Shirai into the plexiglass, then found herself dropped by Storm when she turned around. Toni wanted Storm Zero, but Martinez countered into a DDT. Shirai scaled a light fixture and hit a crossbody from the middle of the sky. Martinez made it up first; she nailed Storm with a knee and a fisherman buster, but Toni just kicked out. In return, Storm Zero couldn’t put Martinez away, so Toni went up top. A flying headbutt wiped out Martinez, but Shirai immediately hit a moonsault onto both, then tossed Toni aside to pin Mercedes. A really fantastic match from all three women, and the only bout tonight that didn’t outstay its welcome. Io Shirai absolutely never misses. 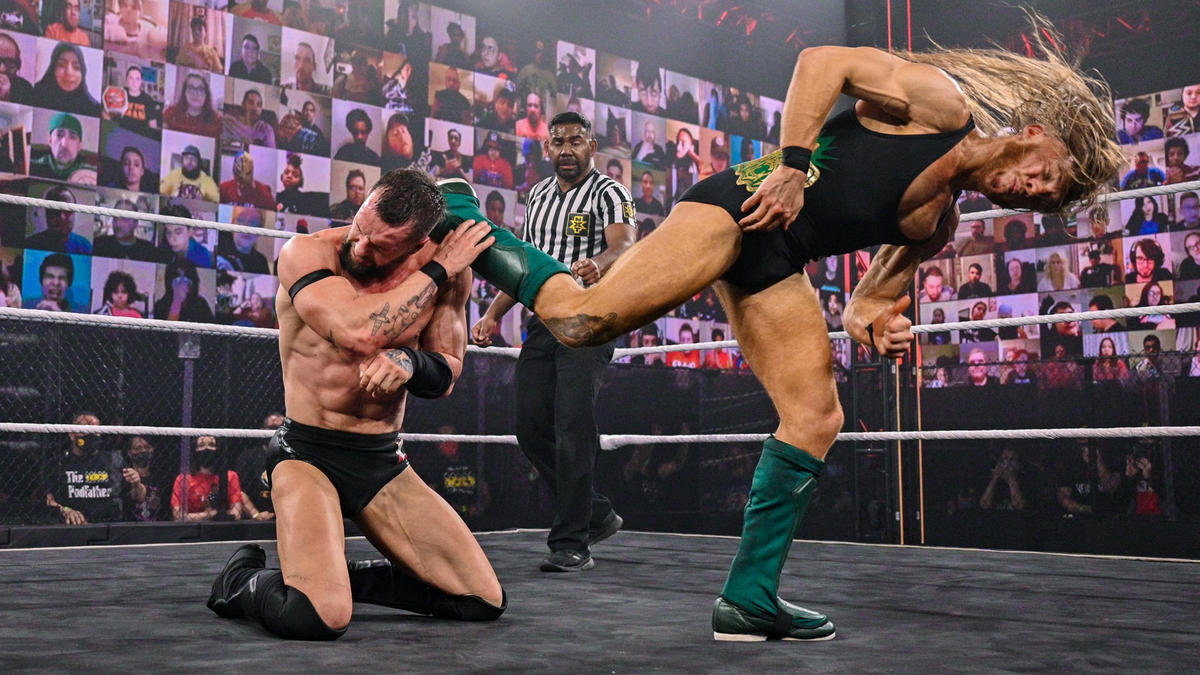 Both men were very evenly matched in the beginning, countering each other’s holds on the mat. Balor had control for a minute before Pete flipped him over and targeted his neck and jaw. Pete split Balor’s fingers in half, but Finn forced him back down to the mat. Dunne went for the shoulder, wrenching Balor’s arm back, but Finn refused to tap. He returned the favor by bending Pete’s knees halfway up his back, which looks like it would crack my spine in the best possible way. Dunne cameback to hit a suplex, but struggled with his injured knee. Balor chopped Dunne in the corner, but that only fired the Englishman up. He nailed Balor with a headbutt and a powerbomb, but Finn kicked out at 2. A huge drop kick sent Pete flying, and the Prince went up top for the Coup de Grace, only to find himself caught by Dunne. Balor got a foot on the rope just as he seemed to fade out. Pete went for the Bitter End, but Finn made a miraculous recovery and countered into a submission. Pete split the fingers to break the hold and landed the Bitter End for a very close 2 count. Balor countered a powerbomb into a DDT, but ate a drop kick. He pulled out Pete’s mouth guard to land a kick and followed it with the Coup de Grace. To really teach England a lesson, Finn ended things with 1916, and Dunne was down for the count. This was a totally different feel from the rest of the show, and it really worked. Balor has shown that he can make it work with literally anything wrestling style, and Dunne is on top of his game.

Post-match, Oney Lorcan and Danny Burch came out to celebrate by putting their feet through Balor’s ribs. Undisputed Era came out to save the day, with O’Reilly helping up his new, extremely cut, BFF. Adam Cole decided he’d had enough of playing the nice boy and nailed Balor with a superkick. Kyle was outraged before he ate a superkick too, much to Roddy’s shock. Seems like the Era may be no more- while I wish we’d seen Kyle pull the trigger a few months ago, it feels about time to see some drama in undisputed paradise. O’Reilly has a lot of potential to break out on his own, or stay aligned with Balor, while Cole is such a natural smarmy heel. No surprise most of his Valentine’s Days end with kicks to the mouth.

Rainbow Six: Quarantine is Getting a New Name, But it's Not Parasite