Bud Light Seltzer brought us the most patriotic event of the second week in July; The Great American Bash. Lady Liberty’s dismembered head and severed arm (plus torch) adorned the stage for the evening, providing a backdrop to a wide variety of entertainment including a championship cypher, the death of Kyle O’Reilly’s neck, and a lot of beefy eye contact between tall dudes. 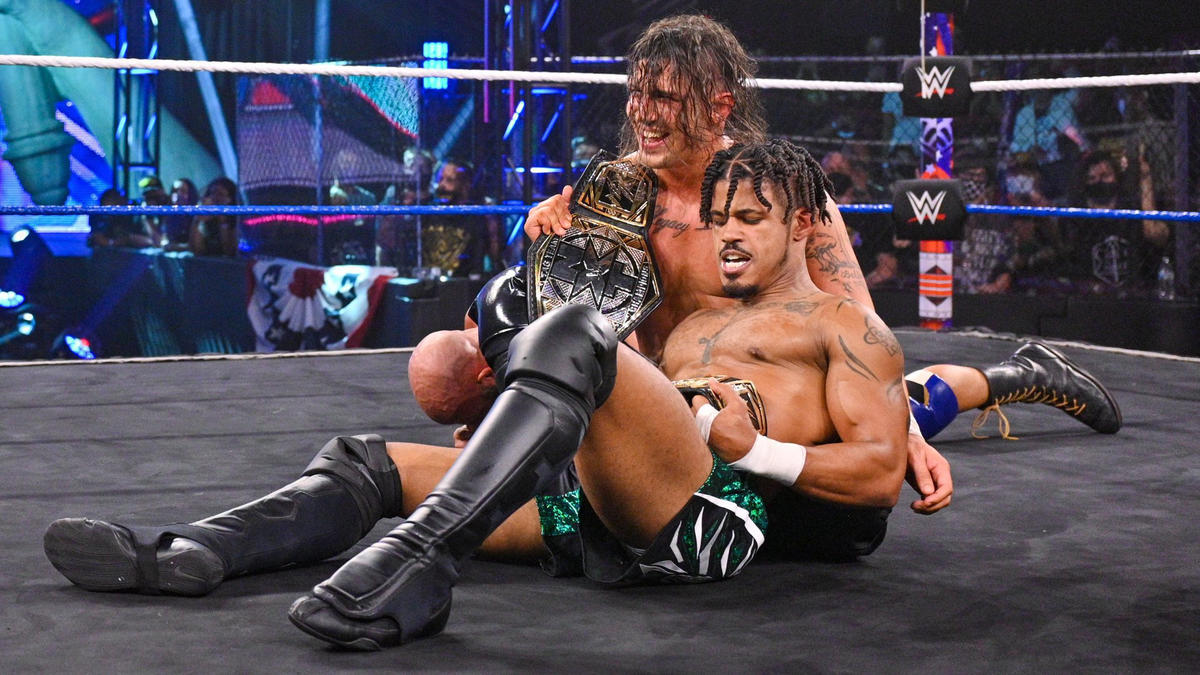 We kicked things off with nice kids MSK facing nasty boys Thatcher and Ciampa. I feel nothing towards Ciampa in 2021, which is kind of a bummer, but mostly a product of NXT’s booking for the past 5 years. Carter and Ciampa started us off, Carter using his speed to wipe out Tommaso with a spinning elbow. Thatcher tagged in, letting him and Ciampa to do some simultaneous beatings. Thatcher grounded Lee on the mat and twisted him up like a pretzel, then set him up in the corner for Ciampa to land a running knee. A drop kick from MSK gave them a short comeback, but Carter went for a moonsault to the outside and took out Thatcher instead, allowing Ciampa to take over again.

A hot tag to Lee allowed him to wipe out Ciampa, but Thatcher took him down on the outside. Double team moves from MSK brought Timmo to his knees, but could only get a one count. Ciampa came back in to dish out some chops, but superkicks to both heels set Thatcher up for the 619 from Lee. Ciampa caught Lee to deliver Project Ciampa for a close count; “Toothless Timmy” tried for a submission on Wes, but neither man could get the job done. Some quick tags from both teams ended with MSK landing double top rope maneuvers, and still Thatcher saved things for his team, dragging Lee out of the cover. Carter barely broke up a submission on Lee after a Fairytale Ending, allowing Wes to get an inside cradle and score the three count. This was a good mix of styles and a solid performance from MSK. I just don’t find myself too invested in Thatcher and Ciampa as a team. 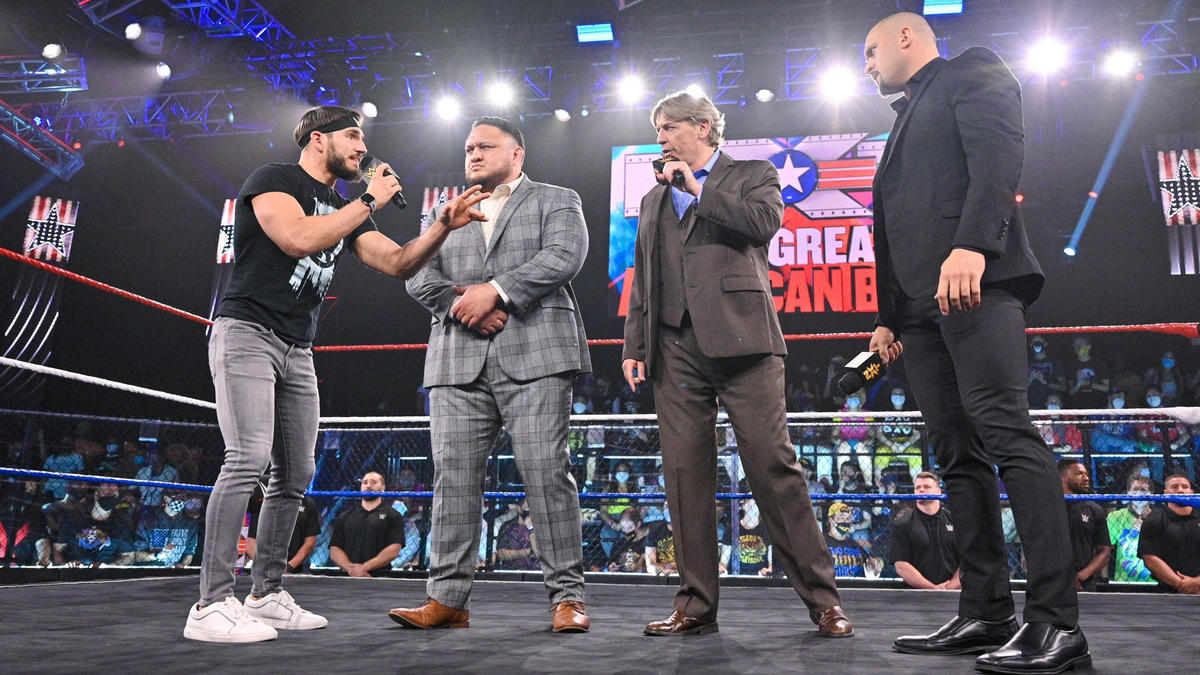 Regal and Samoa Joe came out to ask Karrion Kross and Johnny Gargano why they couldn’t just get along. Regal proposed a match next week with special guest ref Samoa Joe. Who, important to note, was rocking an excellent plaid suit. Kross made a crack about Johnny wearing his wife’s jeans, which sounds like a money saving factor if you ask me, but Gargano fired back that Kross couldn’t even lace Candice’s boots. The man isn’t wrong. Kross tried to get things started now, but Joe stepped up to reign in the kids and stare down Kross right in his soulless eyes. 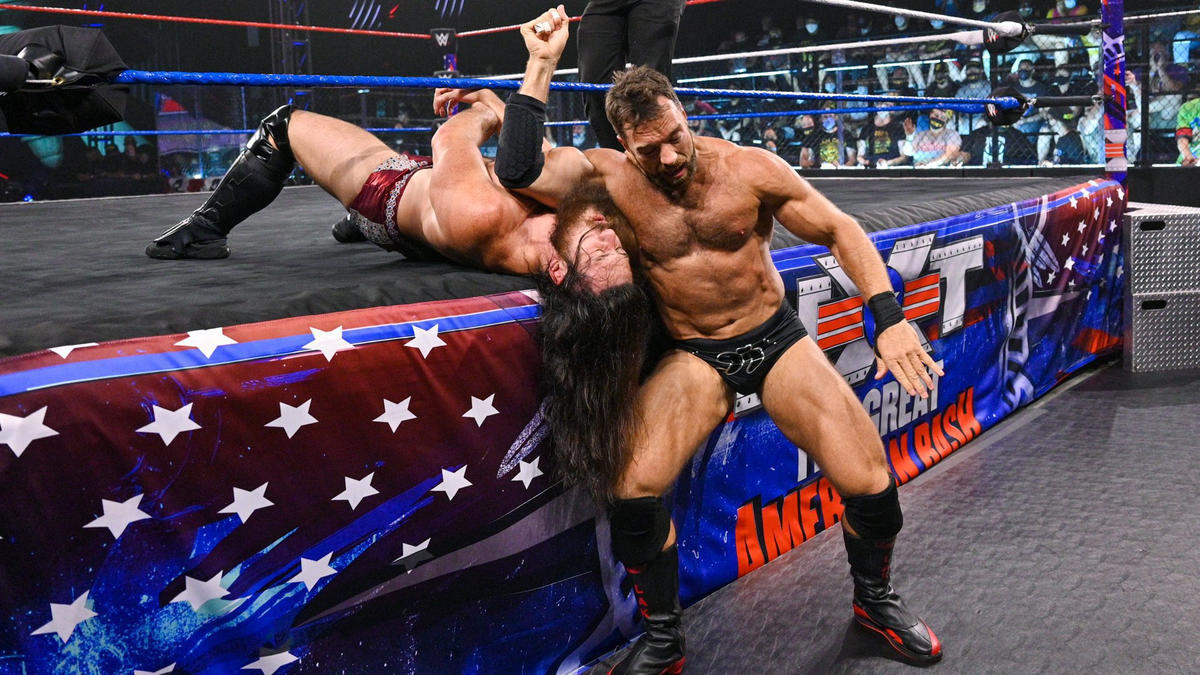 Grimes went right after Knight to avenge the honor of a 67-year-old man, landing a crossbody and getting Knight in a headlock. Knight created some space and went for a springboard forearm, but Grimes caught him with a right hand and a standing moonsault. LA turned things around when he sent Grimes face first into the turnbuckle, but still found himself caught with a Spanish Fly. Grimes was rolling with a series of clotheslines and a slam to Knight, yet couldn’t make his butler-less future a reality. Knight delivered a superplex from the top for another two count. He grabbed his title from ringside and tried to bring it in the ring, but the ref had 20/20 vision and wasn’t having it. Grimes delivered a poisonrana and tried to go to the moon, but Knight slid out of the ring. A DDT onto the fallen title left Grimes potentially dead on the outside, but somehow still made it back in before the 10 count. A BFT from Knight allowed him to retain, sending Grimes on a sad trip back to earth. This wasn’t quite as fun as their ladder match, but it was still fine stuff. 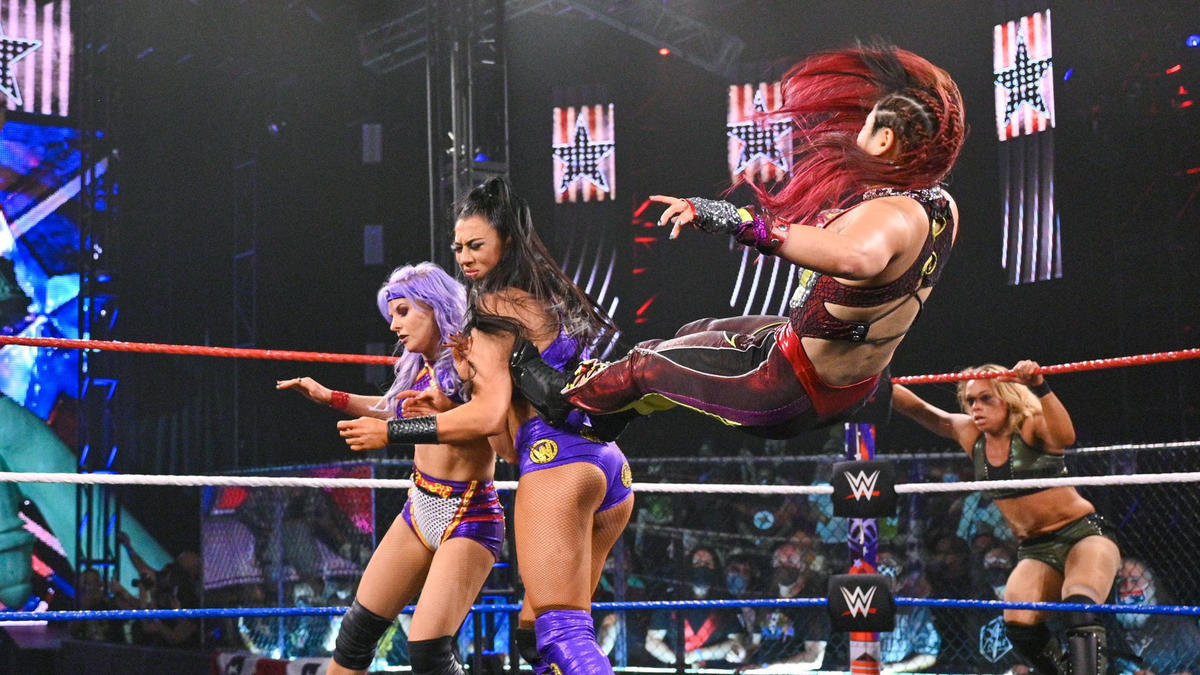 Candice honored us with another wings and trench coat look, which I’m gonna try to rock at my first club appearance in almost two years. Indi and Io started the match, with The Way trying for a double team, but Io was able to counter and lay them both out. Shirai hit a missile dropkick on Indi, then landed a double suplex alongside Zoey for another cover. Hartwell dumped Stark on the ropes to regain control, but both women made the tag to bring in Candice and Io. A Tiger Feint kick and another missile dropkick to Candice earned a two count, and Stark came in to hit another double team. LeRae barely kicked out of a shot to the jaw and managed to avoid a moonsault from Shirai, rolling into the Garga-No Escape. Indi got Stark in the Silencer, because she also has a hot man who refuses to blink on TV, but was forced to release it when Shirai rolled Candice into a pin.

The lights went out, and the iPod hit fully charged, showing us who was behind the vignettes we’d seen for the past month: Teagan Nox. And she’s grunge now. A shocked Candice stood with her mouth open for a good 20 seconds, and Shirai came in with a drop kick to knock her to the outside. A 360 from Stark to Hartwell got the three count, giving us new tag champs and a very horrified Candice. I like Io and Zoey, but a last minute tag team and yet another title switch for the already very young women’s tag belts doesn’t feel necessary. 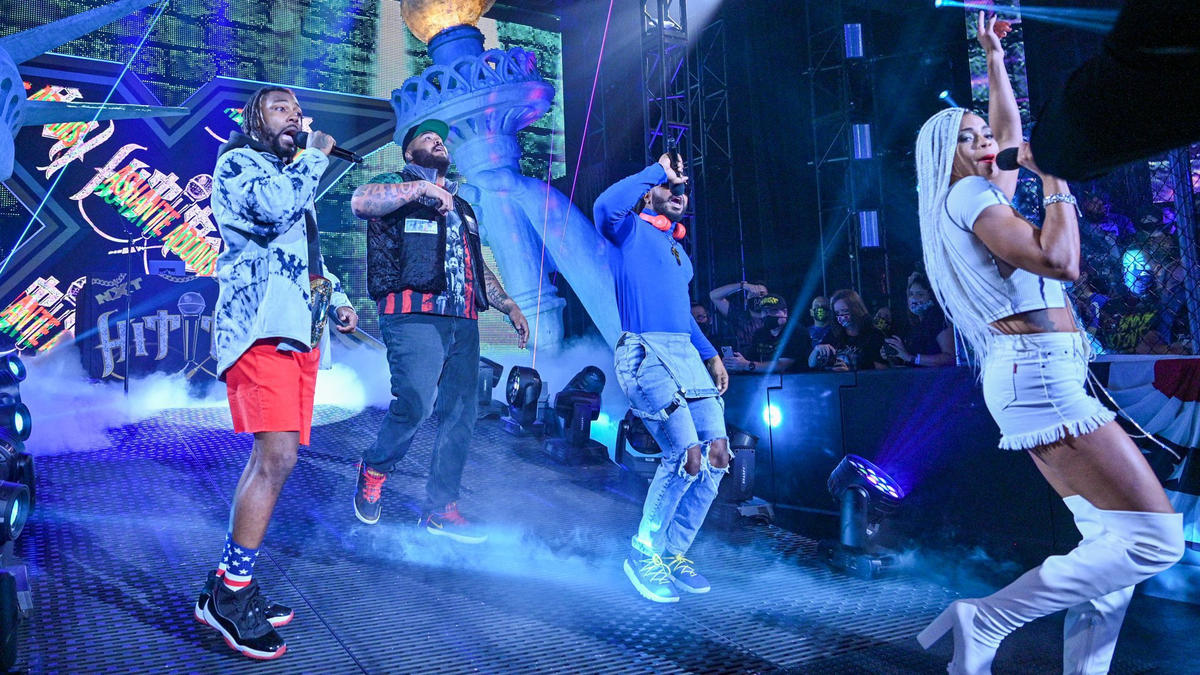 Hit Row came out for their Championship Cypher. I’m very removed from the rap scene so I did have to Google what a cypher is, but this involved all members of Hit Row performing individually before singing their theme song together. Not to expose my personal music tastes even further, but if you can sit through a seven minute Poppy performance, you can’t be complaining about this. I enjoy Hit Row (and Swerve as NA champ), so I’ll watch them sing that theme whenever, wherever. 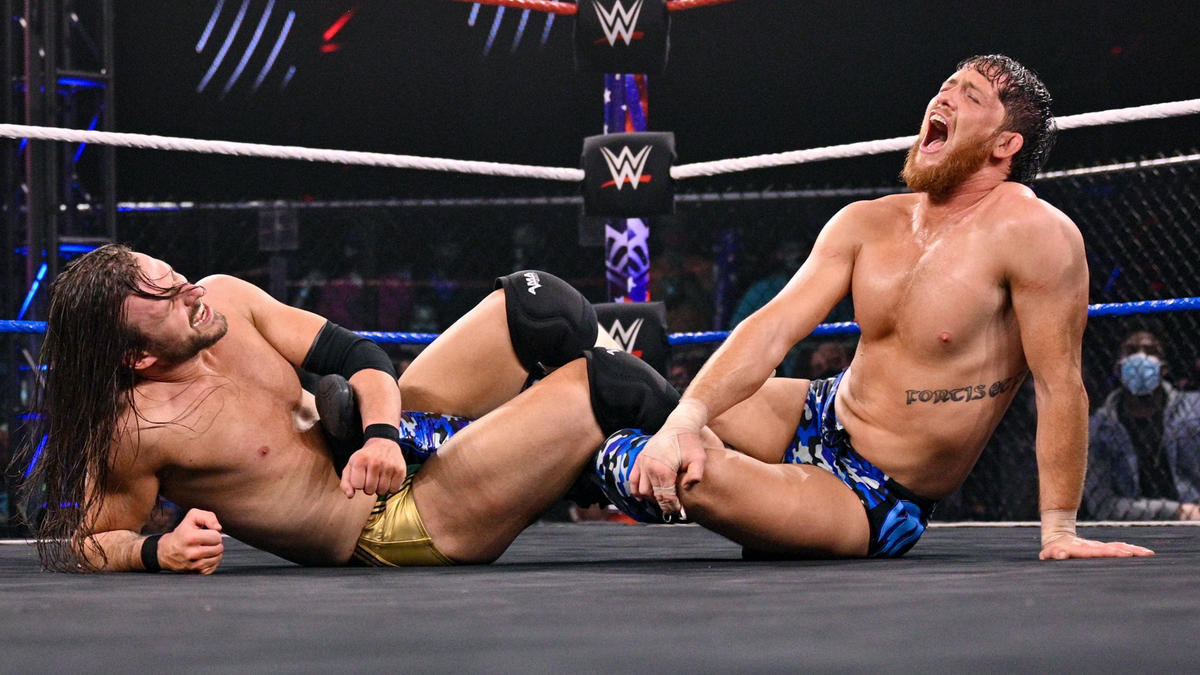 These boys used to be best himbo friends, but now they are deadly enemies: a wrestling tale as old as time. Cole and O’Reilly celebrated America by finally putting their on-again-off-again relationship firmly behind them. They started out evenly matched on the mat, with Cole getting the brief advantage before Kyle slipped free. O’Reilly went for the ankle lock, but Cole grabbed the rope to break it. A kick to the face left Cole escaping to the outside, but he dodged a jumping knee and took out O’Reilly with a neckbreaker. Kyle came back continuing
to target Cole’s knee, but Adam hit a backstabber. He talked some trash about Kyle’s wife, setting that cool Canadian blood on fire. Cole tripped him up in the corner and rammed his knee into the ring post.

Dual clotheslines laid out both men; they traded punches in the center of the ring, but Adam hung Kyle up over the ropes by his knee. Kyle hit back with a Dragonscrew to Adam’s pale little knee, but neither could take advantage. A chop block and a running knee scored another very close call for Adam, who looked like he was about to lose his whole mind. They traded holds back and forth, with Cole barely making it to the ropes to break a leglock. Adam brought out his good knee to get the party started, but Kyle blocked it. He hit his wacky ropes move to land a brain buster and went up top for a diving knee, but Adam rolled out of the way. The Last Shot connected, and still Kyle kicked out. That man’s neck is going to be held together by duct tape. Adam hit Panama Sunrise and another Last Shot to finally score the three count.

This was excellent work from both guys, as expected. Adam Cole could wrestle a toddler and I’d tune in. It’s no surprise to see him walk out with the win here, given his recent shot at the NXT title, although I hope good things are in store for Kool Kyle down the line as well. One Final Bow: #DIY Dies with a Whimper