Another Survivor Series is in the books, and as a whole, everyone was pretty bummed about it. There wasn’t much to write home about here, unless you’re a big fan of talking about but never seeing the Rock, and hearing Pat McAfee yell a lot. If you’re into constant yelling with very little action, this was actually probably a great show for you. Still, even the worst PPV is right twice a day, and we got exactly two good matches last night: Charlotte vs Becky, and Roman vs Big E.

We all knew the main event would be a banger going in; two of WWE’s best men at the very top of their game right now. Reigns is also entangled with King Woods over on the blue show, and big fans may recall Woods and E belong to the same faction. Woods has been a thorn in the Big Dog’s side repeatedly on Friday nights, but we finally saw Big E join the party this week, when he and Woods ambushed the Bloodline to close out SmackDown. While I would have liked to see more of Roman as the Big Bad for The New Day as a whole, the lack of build to this match specifically certainly didn’t hinder it.

As Michael Cole repeatedly told us throughout the match, this was Roman’s 448th day as Universal Champion. Conversely, it was Big E’s 69th (yes) day holding the WWE Title. Accolade wise, it was more of a David vs Goliath than two respected equals. It’s hard to imagine E as the underdog, but when you’re going against the dominance Reigns has held for a year and a half, there’s not much else you can be. Which made it all the more impressive to watch Big E take three Superman Punches and still stand up.

Reigns had to throw everything he had at E; repeated punches, multiple spears, several failed Guillotine attempts. There were a few chants for Reigns throughout, but overwhelmingly the crowd seemed to side with the Powerhouse of Positivity. Reigns was shaken by the New Day rocks chants, vowing to fight the entirety of Brooklyn like he was waiting on the A for 45 minutes at Hoyt-Schermerhorn. As the Big Dog began to take over, he assured E this wasn’t “some comedy crap” like the New Day, prompting the WWE Champ to sling him into the steps. As every improv class I’ve ever taken has taught me, comedy has to be serious to work. And at every turn, E had an answer for Reigns best moves, the stuff that had put away the Fiend, Goldberg, the Demon. But Big E —pancake slinging, pelvis-based dancing, fun wearinloving Big E- wouldn’t stay down! 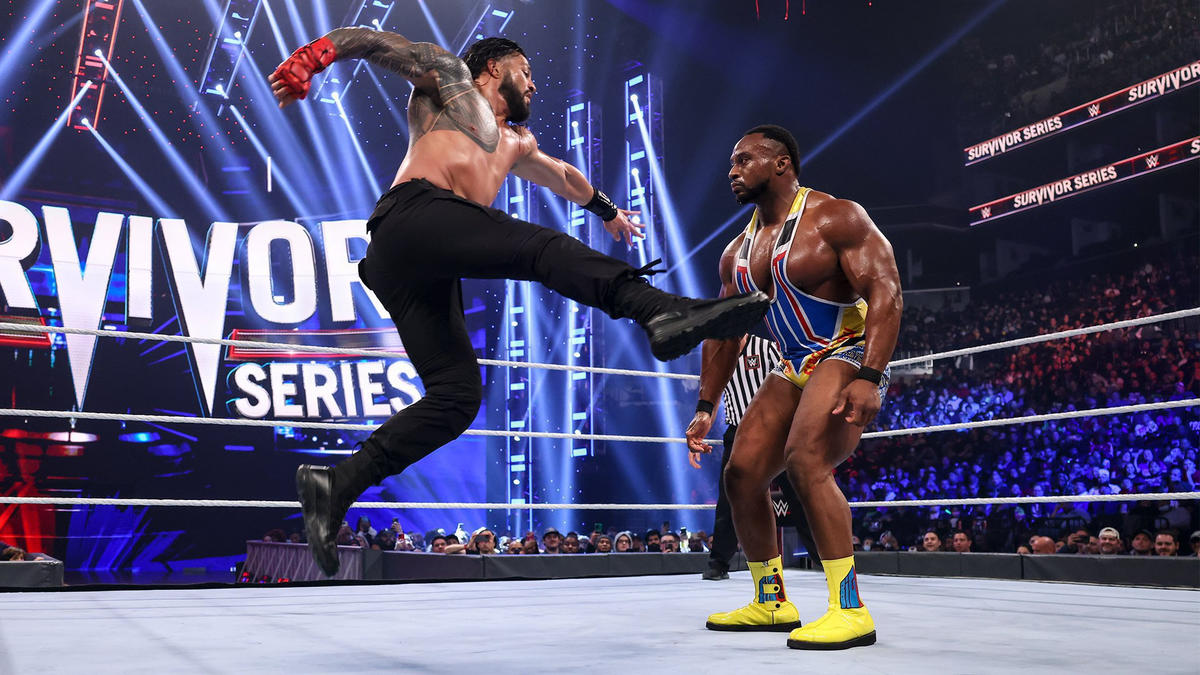 When I discussed my hopes for this specific match, I talked a bit about the differences between these two champions. While Roman has shifted his entire persona to become the Tribal Chief, E has simply refused to change. New Day as a whole are the poster children for staying true to yourself; all three men have reached career heights by never bowing to the critics. They’ve rejected the calls to “get serious” by showing they’ve always been serious. Kofi didn’t need to change who he was to have the most popular Mania match in recent memory. Xavier became King Woods, ruler of SmackDown, after years of buckling down on his two main wishes for his career; playing video games and competing in King of the Ring. And to see E in this spot specifically, going against the version of Reigns who is marketed as unbeatable as it gets, and to see him more than hold his own (complete with the hip thrusts) was special. We’ve always known he was able to hang with the biggest and baddest, and now he’s finally being given the opportunity to show it off.

After some very intense back and forth, and a few close calls where I truly thought he was gonna get the job done, Reigns’ continued targeting of the leg brought E to his knees, allowing Roman to land a final spear to end things. The Tribal Chief walked out with his title and Paul Heyman held high, and E hip gyrated back to Monday night to face — Austin Theory, egg stealer? A bit of a step down from having match of the night, admittedly.

Like I’ve said numerous times before, there are a lot of things WWE does wrong. But one thing they generally manage to do quite right is big men beating the shit out of each other. This was a brawl, plain and simple, and that was all it needed to be. Both Roman and E came out of this looking just stellar, which can be hard to do when you’re booking champion vs champion and don’t want to have a DQ for every match. While I would have loved to see E walk out victorious, it’s certainly not a shocker for the Big Dog to win. Although, it does bring us back to the same issue of who is left to take the reigns from Roman. His program with Woods is great, but the lingering threat of a returning Lesnar seems the safer bet. Roman might walk into the new year as the Head of the Table, but I can’t see him making it past Mania 38.

As for E, his immediate future is up in the air; we had an average match with Theory Monday night, which was watched at ringside by both Owens and Rollins. I’m happy to see a surprise title defense on Raw, but I’d be even happier if it had nothing to do with a golden egg or Austin Theory. Seth still holds a title opportunity, while Owens is circling the scene for as long as he’s got left in WWE. I have hope we’ll see E hold the title into Mania as well, as no one seems right to end his run just yet. But it’s more clear than ever that the future is very bright for the Powerhouse of Positivity, and I can’t wait to see him continue to shine.