The biggest event in NXT history kicked off tonight with our first five Stand and Deliver matches. Sadly, there was no Adam Ant feature, but we did get a Star Spangled Banner guitar solo from Alice Cooper guitarist Nita Strauss. We also got some very solid, if admittedly bloated, wrestling. Plus, the LA Knight promo only went about 90 seconds, so there’s lots of blessings to count. 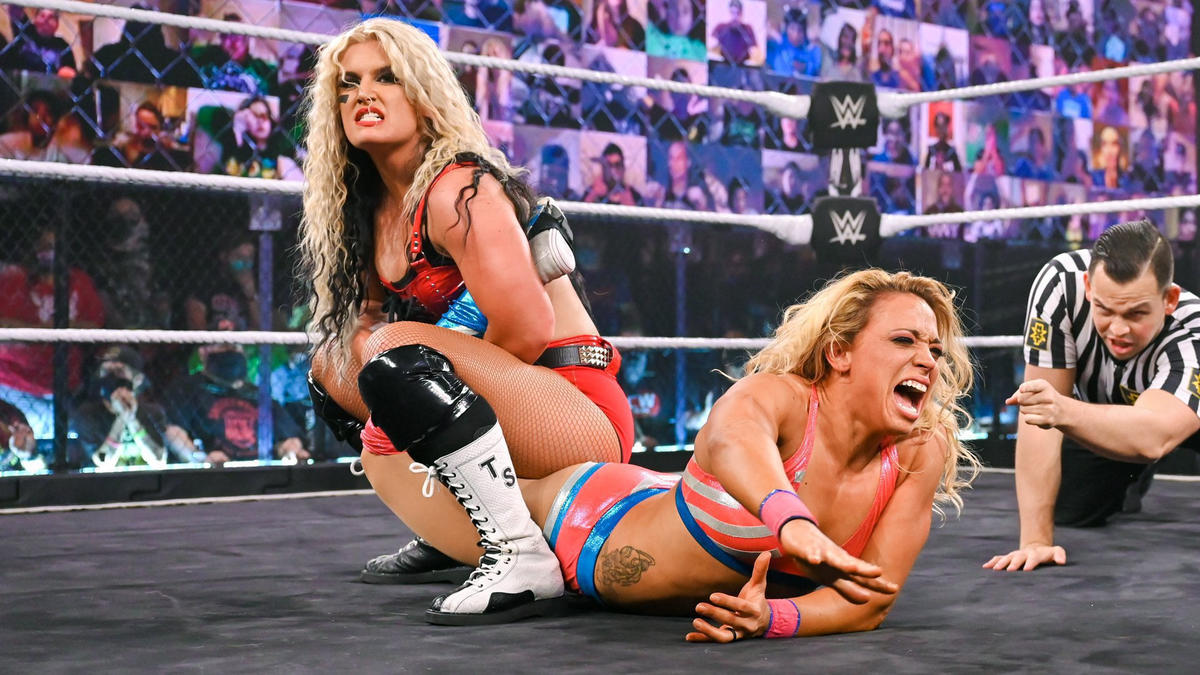 This was a last minute addition that featured Mickie James on commentary, something we all need more of in our lives. Some dueling chants started us off as Zoey grounded Storm, keeping her on the mat with a headlock. Toni took over with a headlock of her own, then dropped Stark with a clothesline. Storm fired off right hands on Stark for a two count and followed up with a suplex, but still couldn’t get the pin. Toni went for a submission, keeping control with uppercuts until Stark fired back with some chops. Toni went up top and got cut off with a kick to the head, and Stark turned it around with a superplex. She dumped Storm with a suplex and a knee to the jaw, but still couldn’t get the three. Storm nailed a Glam Slam for another near fall, but wasn’t able to land Storm Zero. Stark countered into a roll up and scored the victory.

This was fine for what it was. Both women have turned out better, but I think the stilted nature here came from it being the first match up between them. 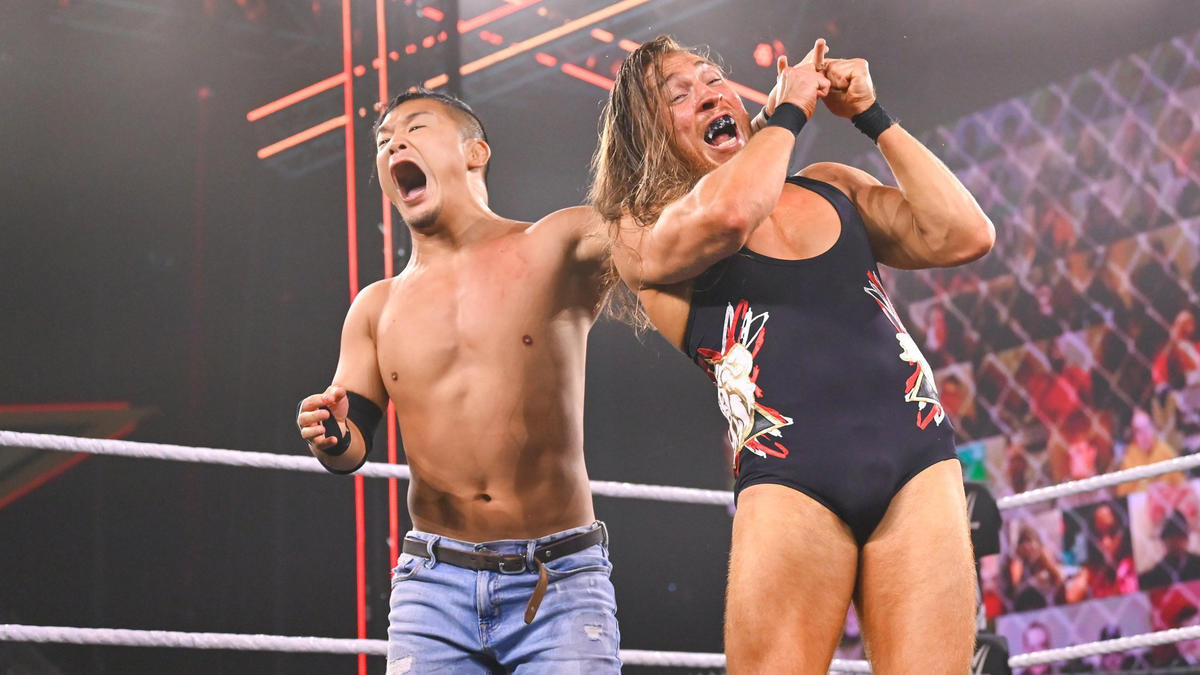 These grappling gents naturally started out on the mat, countering each other into submissions. Dunne planted Kushida into the apron then snapped his arm back over the rope. The two exchanged shots in the ring before Kushida nailed a perfect drop kick right on the kisser. Pete got him back on the entrance ramp, but got caught with a springboard elbow. Dunne went to snap the fingers, but Kushida countered into a roll up for two. A headbutt stunned Kushida and Dunne stomped away. Pete missed a running knee and opened the door for Kushida to try for the arm bar. They went back and forth again in the center, neither able to get the upper hand. Kushida went up top and pulled Dunne off the turnbuckle, flipping into the Hoverboard Lock. Another submission bent Dunne backwards, but he just got a foot on the ropes to break it. Pete returned to ol’ faithful and snapped the middle finger. A kick to the head and The Bitter End finished Kushida and his fingers off. This was some great chain wrestling, as expected, and good work from both guys. 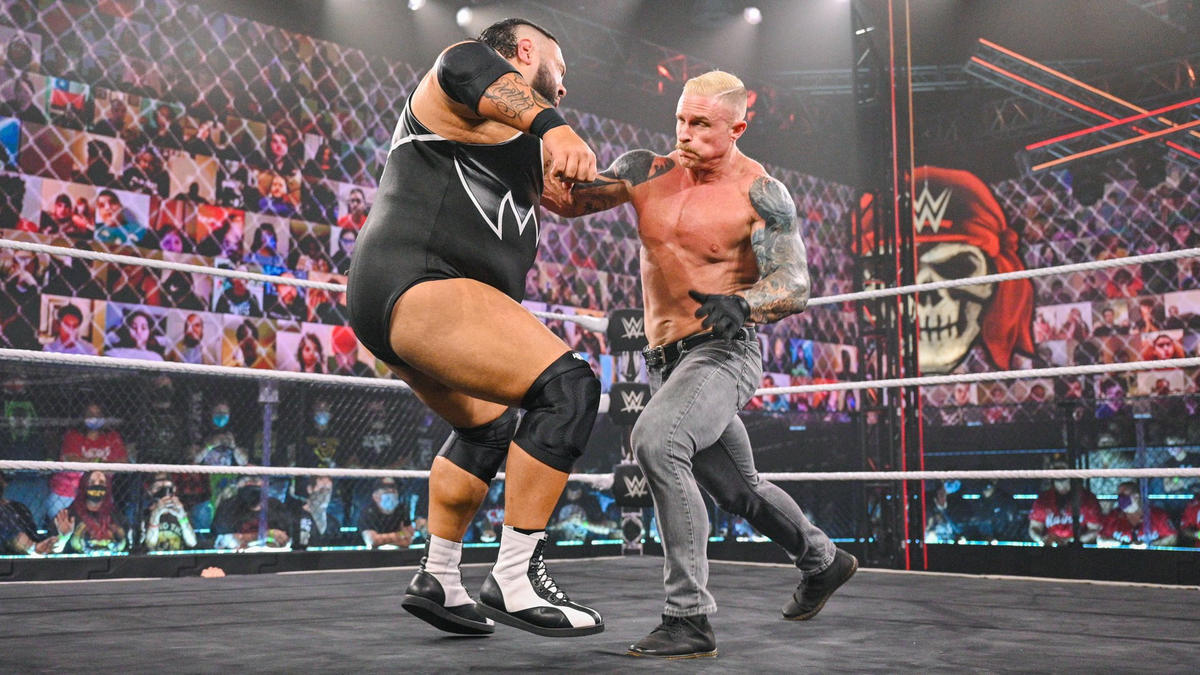 Scott jumped Ruff before the match, but in the time it took Swerve to remove his gold duster, Leon recovered and the two fought to the ring. The bell still hadn’t rung when Ruff landed a drop kick from the top turnbuckle. With the match officially started, Swerve took over on the outside, nailing a kick to the back while Ruff was draped over the barricade. Ruff managed to turn it back around with a huricanrana off the top to lay out both men. Bronson Reed was out next; Ruff tried a crossbody on the ramp, but Reed easily caught him. Reed landed a bonzai drop across Ruff’s back; Leon and Swerve tried to team for a suplex, but Bronson hit them both in a two for one. Rich boy Cameron Grimes was next, working with Scott to drop Reed momentarily. Grimes paid Scott to be his ally and the two teed off on Ruff. No eliminations yet when Dexter Lumis arrived, but Swerve took advantage of the distraction to pin Ruff and send him packing. Grimes tried to run away from Lumis, probably remembering that time Dexter made him jog on the Florida highway in jeans, but got caught and dropped by the mystery butcher creepy magic man. I don’t get his gimmick still.

Lumis and Reed faced off in the center of the ring, both guys firing shots. Clothesline sent Grimes, Lumis, and Reed to the outside while LA Knight entered and talked. A lot. Reed blissfully cut him off by throwing him into the ring, until Knight dropped the Colossus on the apron and cleared house, until he faced off with Dexter Lumis. Lumis got Grimes in the Silence, but Knight flipped into a jackknife cover to knock him off. Grimes returned the favor with a variation on the Cave In and allowed Reed to eliminate the big mouth. Lumis awaited him on the outside, sending Knight to sleep in the Silencer. All three men traded strikes and big moves until they knocked each other down. Swerve and Grimes tried to double team Reed, barely stunning the big man. Grimes tried to stack up Scott, but Swerve rolled through and took out the high roller. Reed climbed up top but found himself pulled off by Swerve, landing straight on the apron. A 450 very nearly got Scott the win; he followed up with the House Call, but Reed only called for another. The third laid the big man down, but he just kicked out at 2.5. A powerbomb and a Tsunami from the top kept Swerve down for the count, sending Reed to meet Mr. Gargano. A really great showing from all six guys, but especially Scott and Reed here. 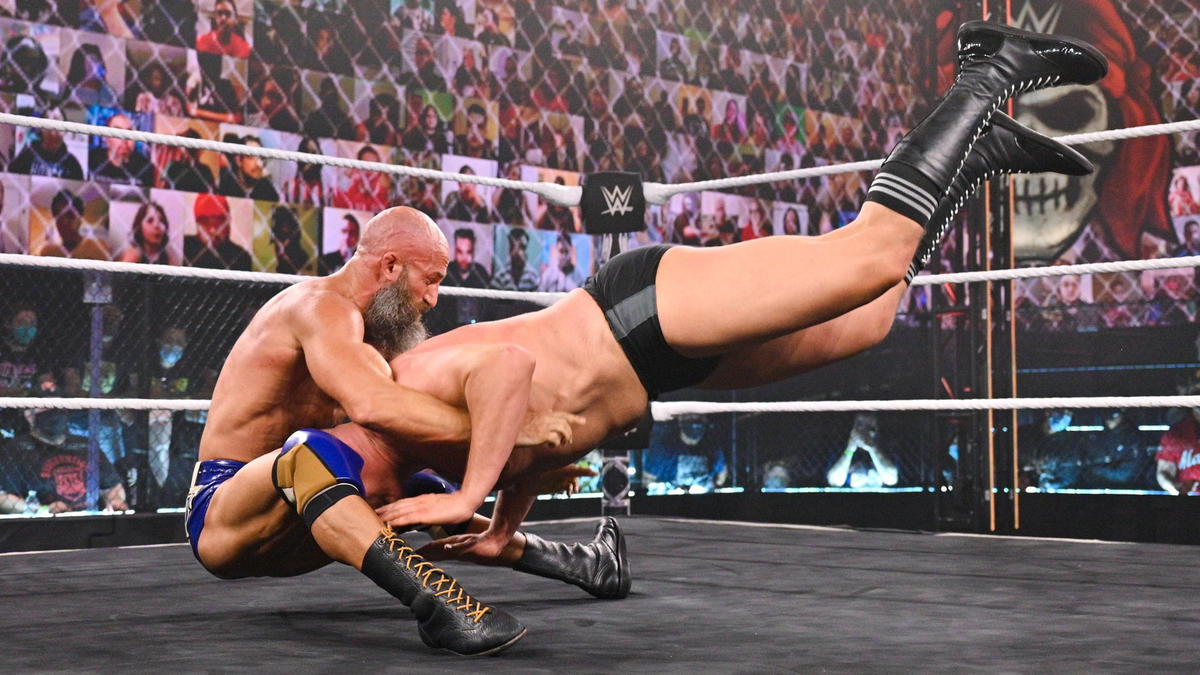 Ciampa was rocking the trunks for this one; we all miss 2017, bud. Ciampa went for the headlock early on but Walter easily slipped out. The champ backed him into the corner; Walter delivered a slap, firing up the Blackheart. Ciampa stomped away in the corner until Walter landed a chop. Ciampa was sent to the outside but managed to land some elbows before Walter bent him back over commentary. He narrowly avoided a chop to fire off some of his own. Ciampa wanted Willow’s Bell, but Walter ran him into the corner and fired off rights. Ciampa twisted the arm and laid in with kicks until Walter cut him off with a huge boot. Walter tried a submission but couldn’t lock it in with his injured hand. Instead, he landed a suplex and dropped Ciampa with another punch. After years of working 30 minute matches with former friend Johnny, Ciampa had some reserve left and railed Walter with a series of clotheslines. He hit at least 15 easy, but the champ wouldn’t go down. Finally, Ciampa landed one to knock Walter on his back.

A fireman’s carry into a slam got a 2 count. Fairytale Ending earned Tommaso the same result, much to his frustration. He bit Walter’s hand to break the hold on a suplex attempt then wrenched Walter in a submission, but the champ got to the bottom rope. Ciampa stomped away some more, he tried again for Willow’s Bell, but Walter dropped his arm on the rope. Both men went up top, fighting for position, until Ciampa delivered a drop for another very close two count. Walter made a comeback with a power bomb and stacked up his challenger, but still Ciampa kicked out. Another clothesline and the Blackheart was down for good. I can’t tell if this was super long, or if it just felt that way. 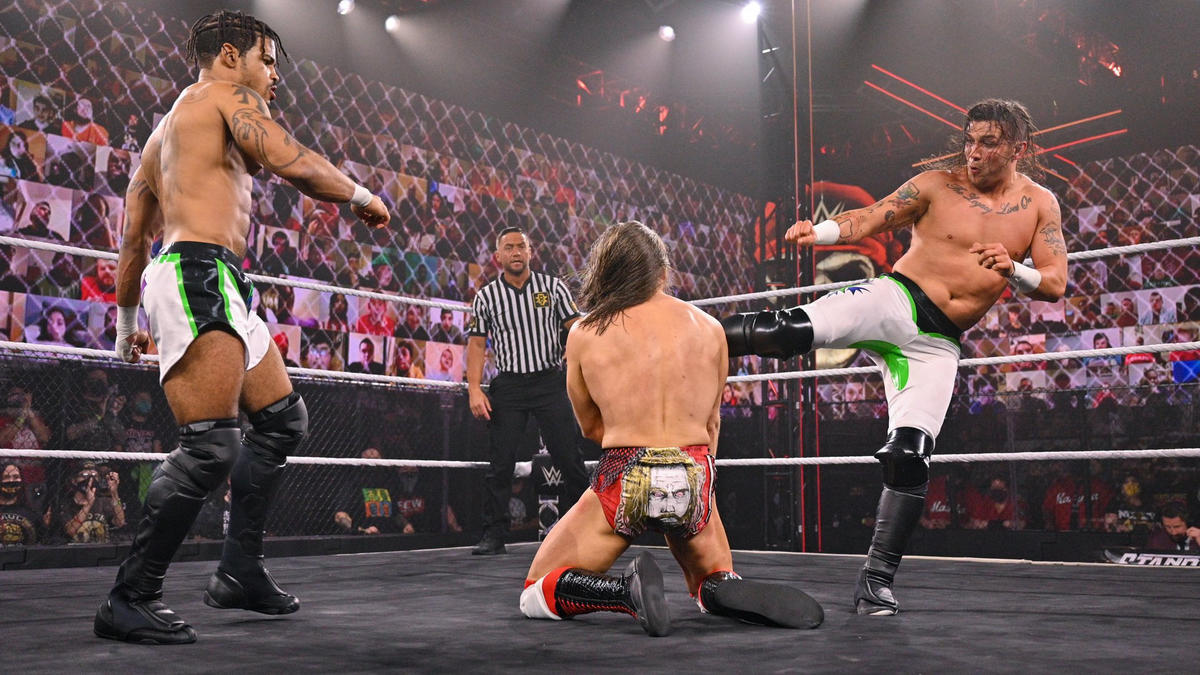 Fast tag action to start us off here; Legado double teamed Wes Lee until Zach Gibson tagged in. GYV took care of Mendoza and Wilde on the apron, but Carter came back in to drop Drake. Drake took control and grounded Carter, until Lee made the tag and MSK laid out GYV. Mendoza tagged back in and Legado rejoined the party, knock down all four other men. Mendoza and Wilde tossed GYV to the outside then focused on Carter, another double team earning a two count. Drake ran in for a quick roll up on Mendoza, who barely kicked out. Lee got the hot tag and wiped out everyone, diving outside both sides of the ring and nailing Drake with a kick. Carter saved Lee from the Doomsday; Lee tried to get up top, but Gibson grabbed his hand and Drake crushed it in the turnbuckle. Gibson got Shankley Gates as Drake tried to stop Carter, but Lee grabbed his friends hand to keep him from telling, and it was very cute, thanks. Legado broke up the submissions then laid out Lee, who just barely kicked out. Wilde got caught in a Doomsday device while MSK knocked down Mendoza, effectively taking out Legado. GYV and MSK fought it out in the center, with Gibson and Drake trying for Ticket to Mayhem. Carter blocked and MSK landed their finisher to claim the titles. A feel good ending for the nice young men, and a great showing for all the teams involved. 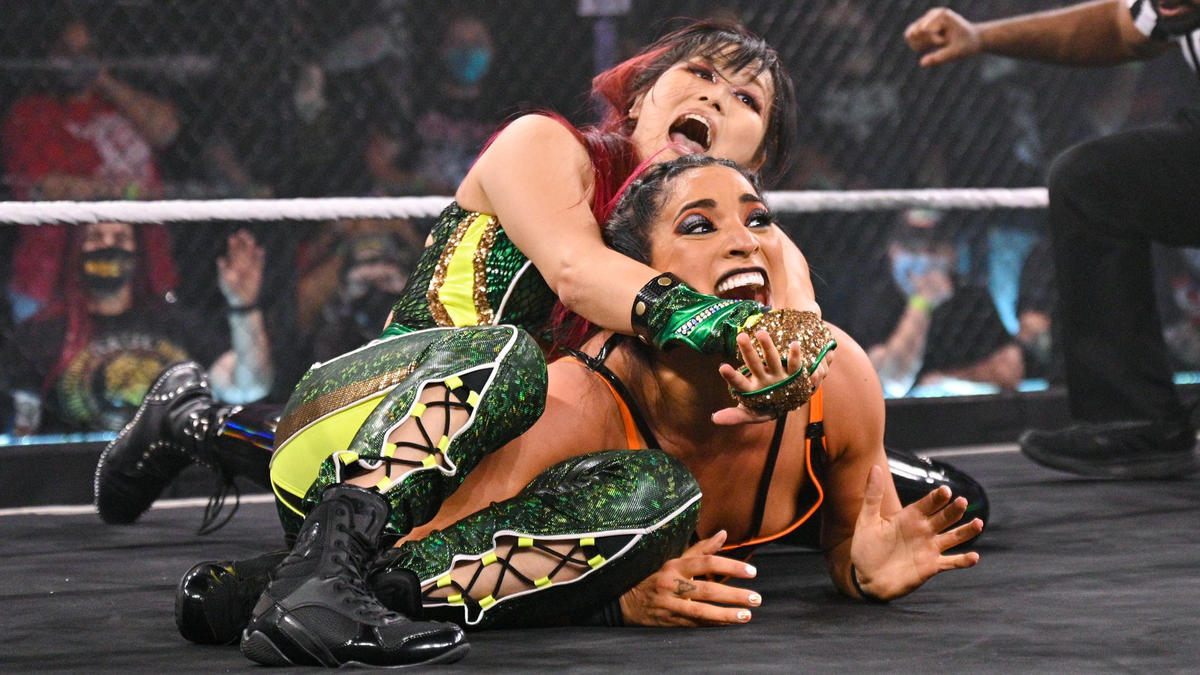 Shirai tried to go right after Gonzalez at the bell, but Raquel caught her easily. A big boot dropped the champ and Gonzalez fired off in the corner. Shirai came back with a shot to the midsection and huricanrana off the top, rocking Gonzalez. A crossbody on the outside sent Raquel right into the barricade, but Dakota Kai hopped up on the apron for the cheap shot to Shirai’s face. The ref sent her to the back, momentarily halting the greatest love story in WWE currently. Gonzalez caught Io on another dive and threw her into the ring post, easily taking over. After a few near falls, Shirai managed a few chops, before Gonzalez knocked her down again.

Raquel tried for a submission but the champ refused to tap, making her comeback with a Feint Kick and a Sunset Flip for a near fall of her own. Shirai got her opponent in a cross face, forcing Raquel to crawl to the ropes. A moonsault onto the ramp knocked out Gonzalez; Shirai followed it up by scaling the entrance skull and hitting a crossbody from the top. Another moonsault in the ring and Gonzalez just kicked out, stunning Io. Raquel planted the champ outside the ring and rolled her back in, hitting a huge lariat that turned Shirai inside out. Gonzalez nailed the powerbomb for the three count to score the championship. An incredible win for Gonzalez and fantastic effort from both women here.

Maybe I'm a Bronson Reed mark, but I had a nice time.