The studio wanted to modernize and find opportunities to capture the original vision.

Bioware has released a new comparison video showcasing visual changes made to the original Mass Effect games as part of the Mass Effect: Legendary Edition remasters coming out next month. As well as a blog breaking it all down in more detail.

The new trailer shows scenes from all three games, as well as test footage made to showcase different characters in the remaster. It leads with comparison shots of the first Mass Effect, which has definitely seen the most change in bringing things to modern consoles. New lighting and textures were added as part of in-game beautification passes, as well as improved particle effects. Using characters like Ashley Williams, Thane Krios, and Tali’Zorah vas Normandy, the trailer also shows off improved skin rendering, enhanced or remade textures, and more detail added to the games’ 3D models.

In a final montage, scenes from the original Mass Effect are used to show improved eye shaders on characters like Captain David Anderson, changes to lighting in the world and cutscenes, as well as universal improvements to all the games, including 4K base assets and much more.

In the blog post, Bioware explained it handled remastering the original Mass Effect trilogy with a three-fold plan. While you can check out the original post for both a detailed breakdown of the process, as well as direct comparisons of the original game versus the remaster, here’s a quick recap:

This started with Bioware was cataloging assets. From visual effects, models, textures, sound effects, music, and cutscenes. Once the studio had a grasp of what they had on hand, it was about seeing what needed improvements to be brought to modern hardware. Since the Legendary Edition remasters would be moving to platforms that could output at 4K resolution, the team decided to put the time in to improve all 30 thousand+ textures across all three games.

As much of Bioware’s creation tools had seen a significant overhaul since the release of the original trilogy, so the team looked to modernize the original Mass Effect as much as it could. Several assets, such as characters and what the team describes as “generic props” were used in later games and DLC. So those improved assets would act as a base that could be improved further on modern hardware and used across all three games in the Legendary Edition. While this did mean that the remasters had higher quality assets across the board, the studio did what it could to ensure the passage of time was preserved between all three games.

This meant characters like Liara, Kaidan, or Garrus, all of which appeared in every game, needed a little bit more care to ensure their new looks in later games didn’t become part of their design in earlier ones. Such as Garrus’ armor in Mass Effect 2 being damaged, or a uniform that carried the Normandy SR-2’s branding showing up in the first game before the ship even existed. 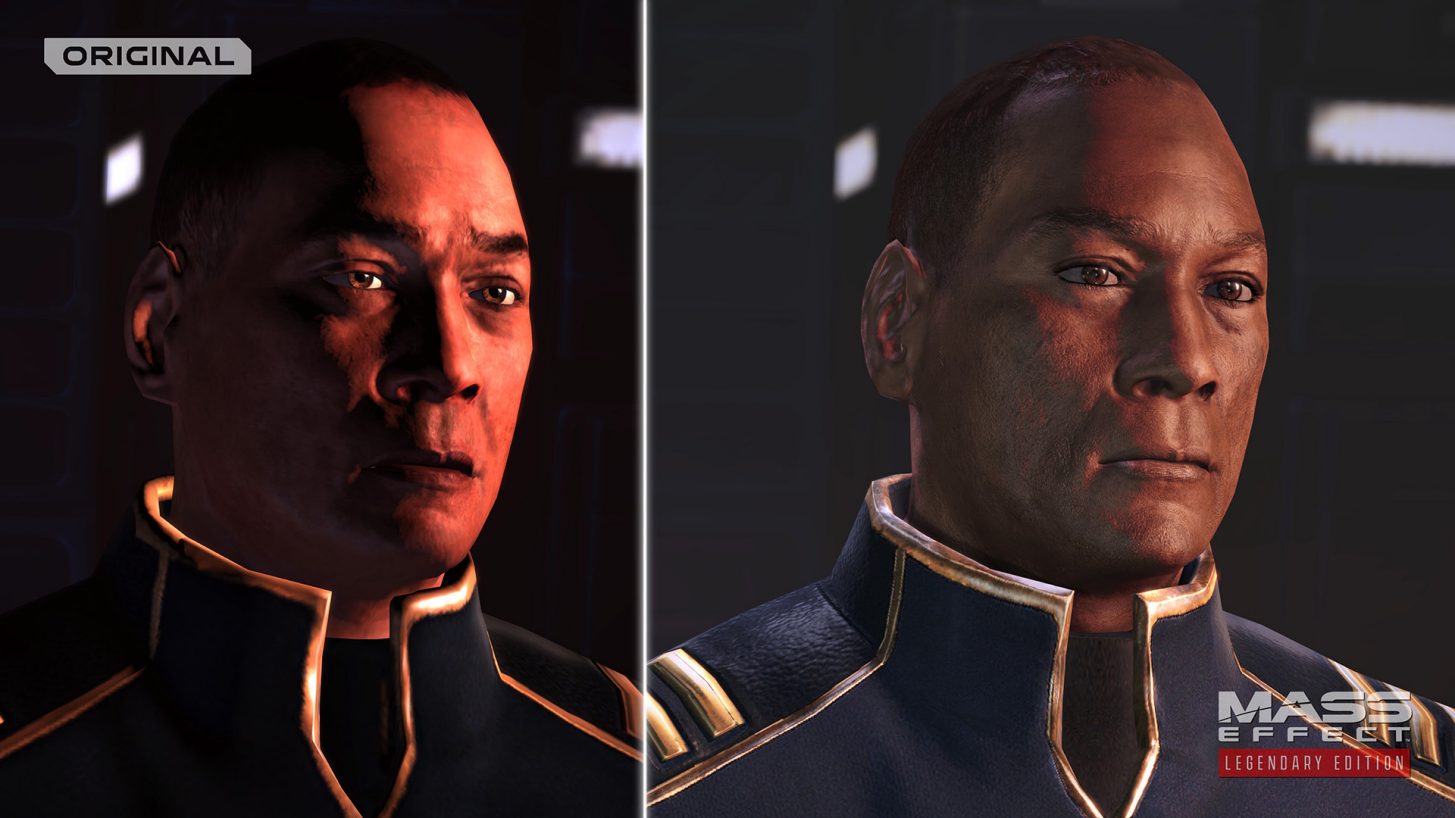 While certain characters received very specific treatment, across the board, Bioware looked to improve environmental textures in subtle ways, such as ensuring plastics, fabrics, and metals reacted to new lighting. This was in addition to updates to skin, hair, and eye shaders, and adding new particle effects throughout all three games.

Cinematics were also re-rendered for 4K, or an AI upscale program was used on the original game’s uncompressed videos. In the process, the studio did some color correction tweaks, and smoothed out some edges in order to keep cutscenes consistent with the actual gameplay.

While the first two phases were about a lot of specific details, the third was about broad strokes and updates that would affect large areas of the games. This meant comparing shipped environments to original concept art, and looking to try and capture those in ways Bioware couldn’t originally on old hardware. This could mean making the Feros environment more rundown with smoke and damaged environments, or by creating a greater contrast between Noveria’s dangerous blizzard and its habitable areas.

While this went into the visual updates Bioware made across the games for the Legendary Edition remasters, the studio also broke down some of the technical and gameplay improvements that were implemented last week.

Mass Effect: Legendary Edition is coming to PC, PlayStation 4, and Xbox One on May 14.