Everything you need to know from the showcase revealing the next expansion.

On February 5, the Final Fantasy XIV team held the 2021 Announcement Showcase. While many things were revealed (and thus many things made me get emotional), it was dedicated to revealing Endwalker — the next expansion for the MMORPG. Here’s everything you need to know about the event.

While expansions have traditionally come out in the summer of their respective years, COVID-19 slowed down development by around two to three months for the development team. That’s why Endwalker will be coming out in Fall 2021 instead, which really isn’t a long wait. When I last spoke with director Naoki Yoshida, I was surprised by how incredibly efficient the team managed to be while adapting to the changes of the pandemic.

Until now, each expansion has represented a different time of the day. A Realm Reborn signified a sunrise over the 1.0 version of Final Fantasy XIV; a new beginning. Heavensward was the clear blue sky you have at midday, while Stormblood represented the crimson twilight that settles in the evening. Shadowbringers was the black of night — and Endwalker will symbolize a new dawn. After all, Endwalker will be the finale to the 10-year saga of the Hydaelyn and Zodiark storyline.

We have practically known this for a while. What we hadn’t known is that the story in Endwalker will be finished by the end of the expansion, which will be known as Patch 6.0. Previous expansions have had their stories continue in follow-up patches, such as Patch 5.3 which marked the (unparalleled) end of Shadowbringers. Yoshida-san was adamant about this not being the end of Final Fantasy XIV, though. Patch 6.1, the first content after Endwalker, will simply be the start of a new adventure — one he will be here for. Yoshida-san says the game is his life’s work and that he feels he will be working on it his whole life.

“What were the final days that brought the mighty ancients to their knees? To uncover myriad secrets — of Hydaelyn, Zodiark, and deeper mysteries still — the Warrior of Light embarks on a journey to the moon,” begins the story preface of Endwalker. It is “the long-awaited conclusion to the tale of gods light and dark.” The story will involve the Warrior of Light and the scions preventing the second coming of the final days.

Narrated by Emet-Selch, which does absolutely normal things to me like make me tear up as I write this news post, the teaser is an incredible watch. I cannot confirm or deny whether finally seeing Alisaie and Alphinaud in CGI form made me cry and clutch my heart. I expect they’ll be major focuses in this upcoming expansion, as Lyse was in Stormblood and Y’shtola, Urianger, Thancred, and Ryne were in Shadowbringers. (Ryne is a scion in my heart, okay.)

Endwalker will create new questions and answer some old ones, such as:

Endwalker will bring many things we fans have been waiting for —including (finally) a new healer. God bless. You love to see it. Endwalker will bring two new jobs: Sage, the game’s fourth healer job, and a currently unrevealed melee DPS. It will be revealed in the next digital event, which will be the Final Fantasy XIV Fan Festival on May 15 and 16. Yoshida-san was coy and rather playful with his teases that it will be Necromancer, but it remains to be officially seen.

Sage is the first barrier healer job in the game (there will now be a distinction between normal healers and barrier healers). It will not require another class to start, which you will be able to do in Limsa Lominsa. It looks wonderful, it’s a new healer class, I welcome it wholeheartedly despite how horrible the healer queues will be once 6.0 lands. Just please make sure all the other healer classes end up okay. Final Fantasy XIV, don’t make Astrologians suffer, you so sexy aha.

As you can see when comparing the teaser and the job reveal, Alphinaud has changed his job to a Sage. It suits him perfectly. One has to wonder what G’raha Tia’s job will be, and if it’ll end up being the second job.

One of the locations we’ll be going to in Endwalker is the stunning Radz-at-Han, located on the island of Thavnair. It’s a colorful towering city that made many fans gasp when it was first revealed. (Hello, I am many fans). Just look at it: 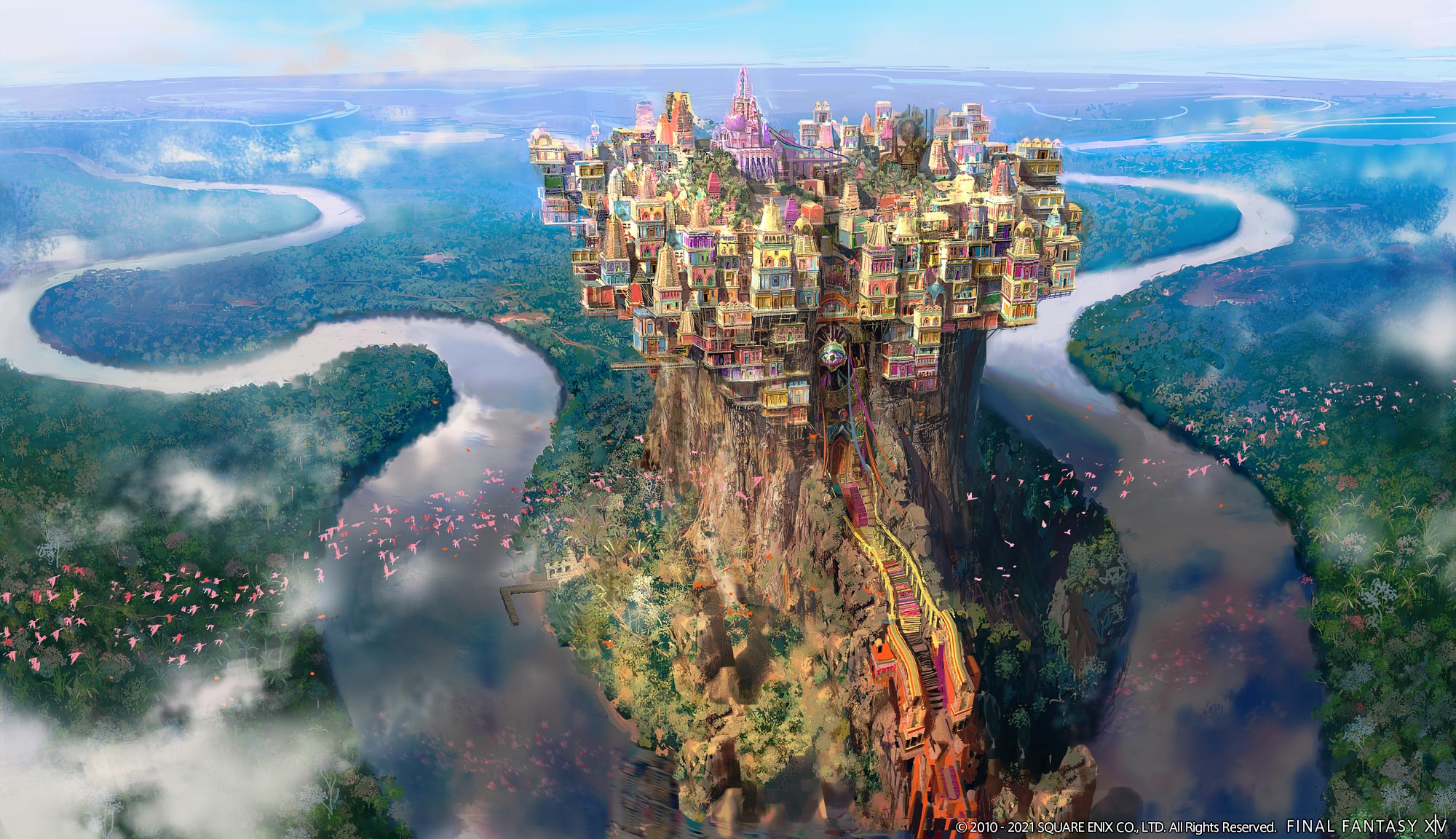 You can see more artwork and in-game screenshots of it over at the official Final Fantasy XIV: Endwalker website.

The website also gives a nice summary of what else will come with Endwalker, such as:

As mentioned before, much more on Endwalker will be coming in the digital Fan Festival. Replacing the in-person Fan Festival due to the COVID-19 pandemic, it will be free to watch. However, paying for the event will get you some perks, like a Lunar Whale mount that serves as the game’s first full-party mount. Since we’re going to the moon, you can also get minions of three Final Fantasy IV characters: Edge, Rosa, and Rydia.

Final Fantasy XIV: Endwalker will come out in Fall 2021. You can watch the full Announcement Showcase above.

And, if you haven’t already, you should play Final Fantasy XIV, which has a free trial that goes up to level 60 and includes the entire base game and the first expansion, Heavensward. Just in case you hadn’t heard that yet somehow. And, if you did, the reminder is good. Go play it.